"Good ol' Nintendo. I never expected it would be this fun. Luigi is so damn fun it makes Nintendo really an ultimate entertainment system. A king of entertainment if you will." 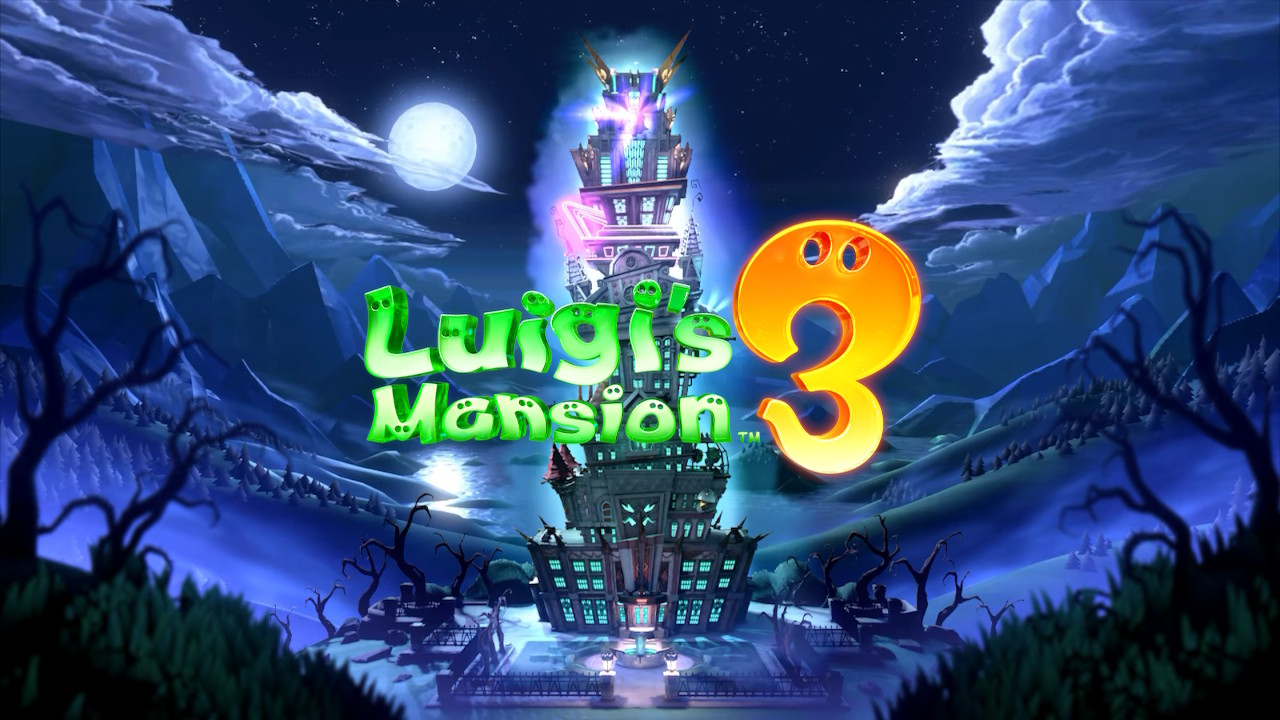 Luigi’s Mansion 3 is newest installment for Nintendo Switch, developed by Next Level Games known for mostly doing stuff for Nintendo; Super Mario Strikers (Gamecube), Mario Strikers Charged (Wii), Punch-Out (Wii), Metriod and Luigi on 3DS…Guys did a damn fine job here, they can add another success to their list and as far as I’m concerned, they can start working on a sequel. 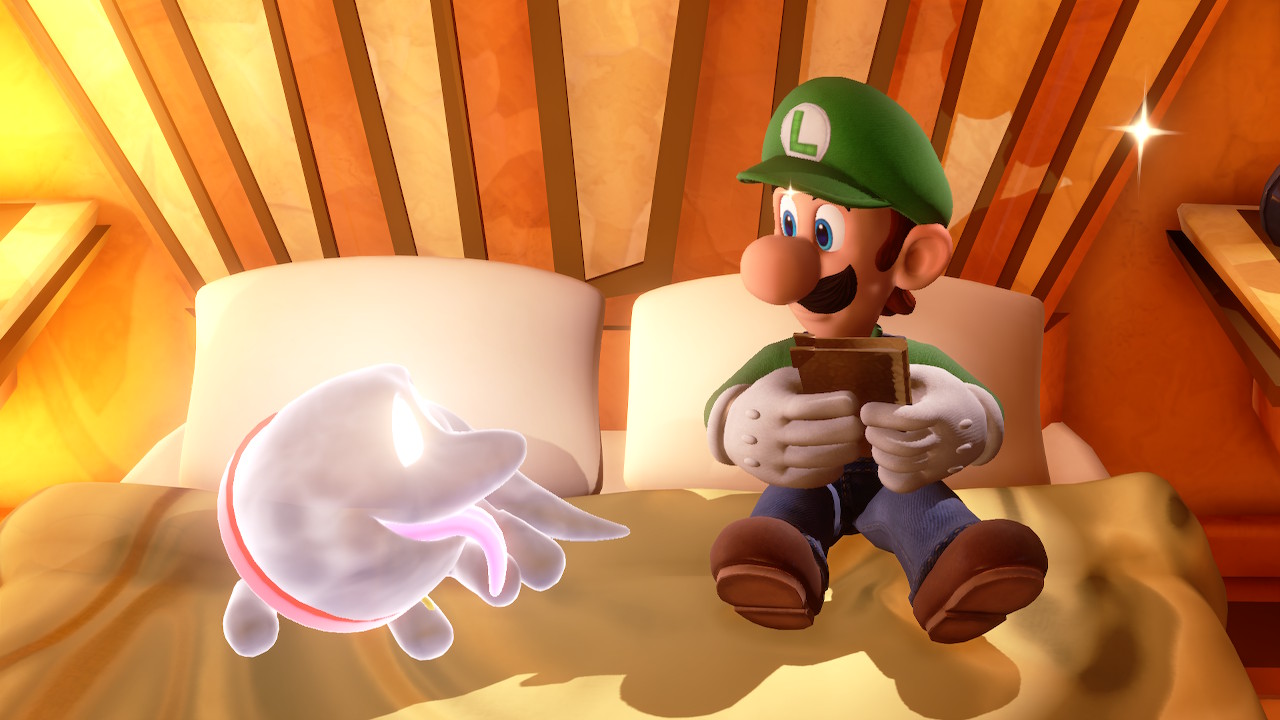 What can go wrong? Sleeping with your ghost dog always ends up positively.

Last Luigi vacuumed his way on 3DS. I still miss that one, I played the first on Gamecube and loved it. I thought to myself, years have passed, I'm older, this can’t be as much fun as it was. Wrong. This is even more fun, it aged wonderfully. Even though the recipe didn’t quite change, much effort was invested making all floors of the hotel we visit here so unique and fun, interactive and breath-taking, it will hook you and won't let you go until you're done.

I always liked Luigi. He was like Mario’s goofy brother, but always in the background never getting any real attention. Luigi said screw this, get me a vacuum cleaner, find some haunted building and let me show you how it’s done. That fits perfectly, not only did Luigi get a brilliant role, but also an entire game for himself. He managed to get mixed into some Nintendo-ish metroidvania exploration action vacuum cleaner adventure that is just for everyone. 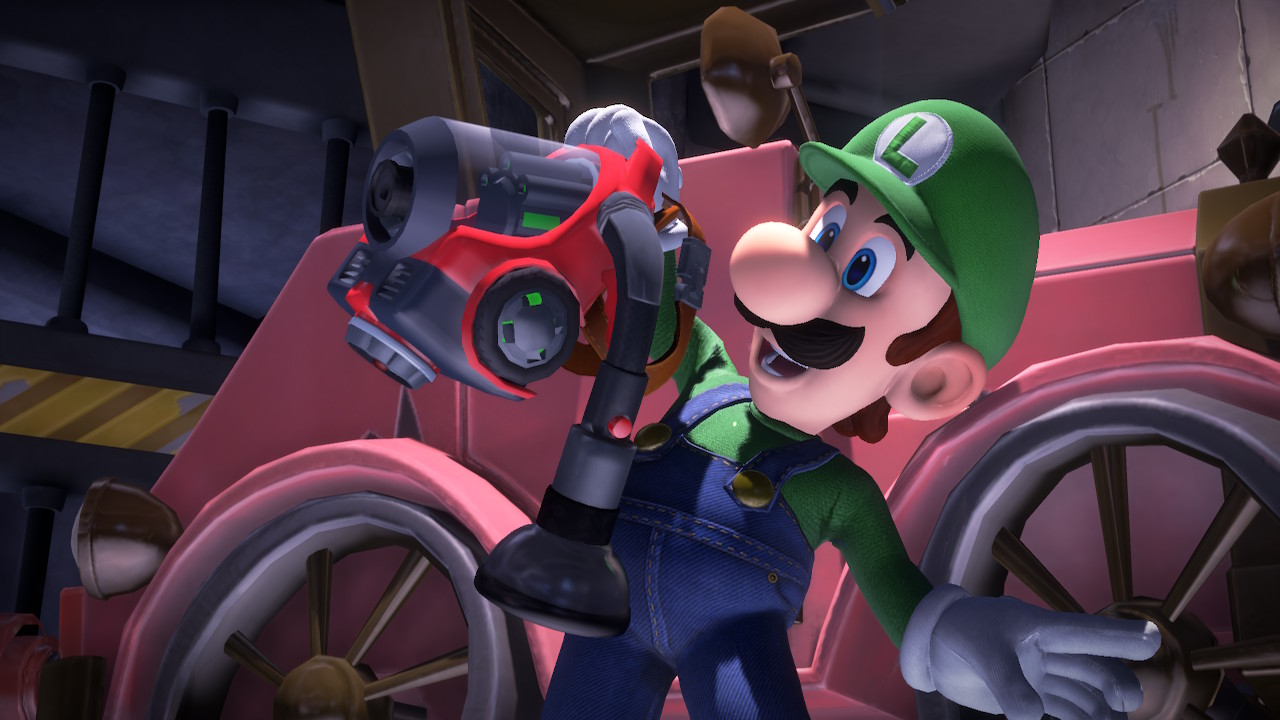 I sure showed my girlfriend that I can vacuum.

So, Luigi and his pet ghost doggy Polterpup, Mario, Princess and some Toads went on a vacation. Interestingly they got invitation to a high-end luxury hotel and what is the best way to spend vacation? Not collecting mushrooms like Mario would want. Upon arriving, just when Luigi thought he can get through the night, he woke up just to find hotel was deserted and others are missing. Perfect game for this year’s Halloween, it’s spooky but fun. You slowly make your way through some doors, find some weird stuff and finally – a vacuum cleaner! 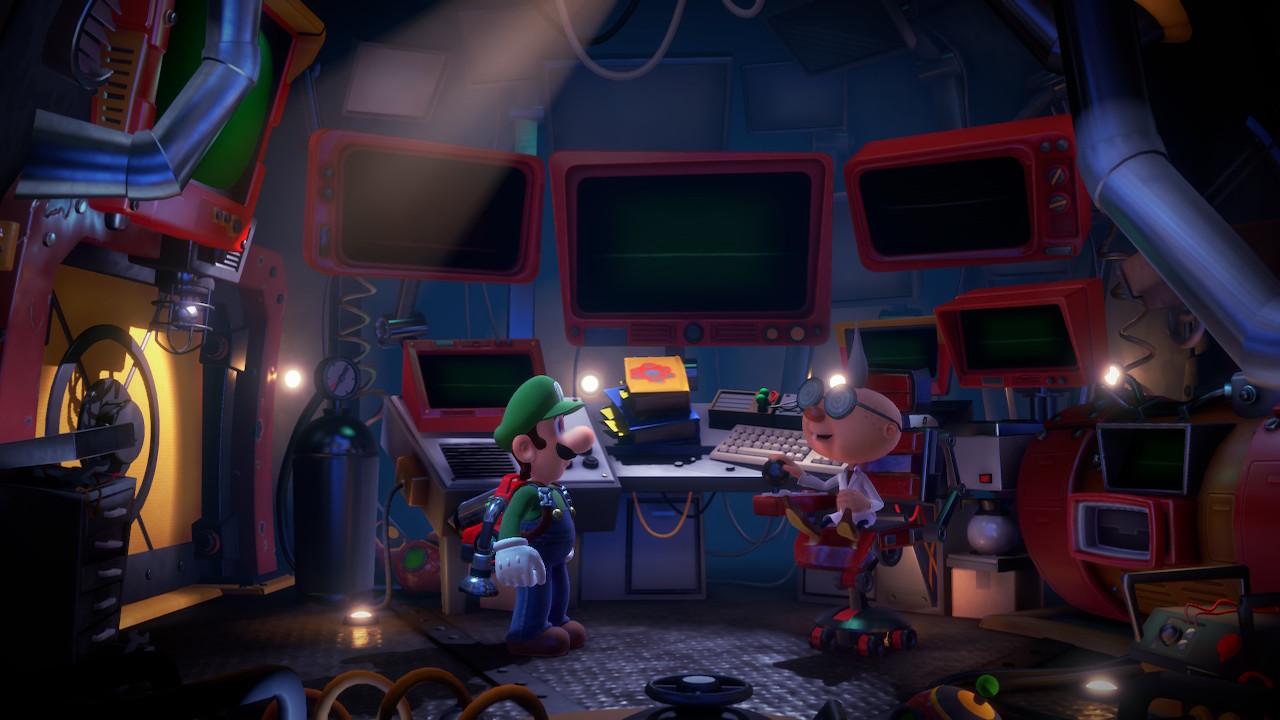 Flashlight and vacuum Ghostbuster cleaner will be your best buddies. Of course the hotel is haunted and the evil witch sits on top. Even King Boo is on the loose, even though he was captured in last Luigi adventure. Your mission is to bring them all to justice – to vacuum the shit out of them while flashing them in the eyes.

Right from the start, you will notice how interactive every room is. It’s ridiculous, you can vacuum almost anything that can fit or more. Why would rooms need pillows, flowers, plates, glasses, scrap, towels, garbage, pumpkins, leaves, swords? No, not while Luigi is in charge. Our hero puts a shadow over every housemaid, man, woman or every gender you can think of. He is the ultimate Ghostbuster, the terminator of the vaccuuming. He is the master of cleaning. The Vacuum Effect. I need collaboration in my Monster Hunter to include Luigi’s cleaner and outfit. 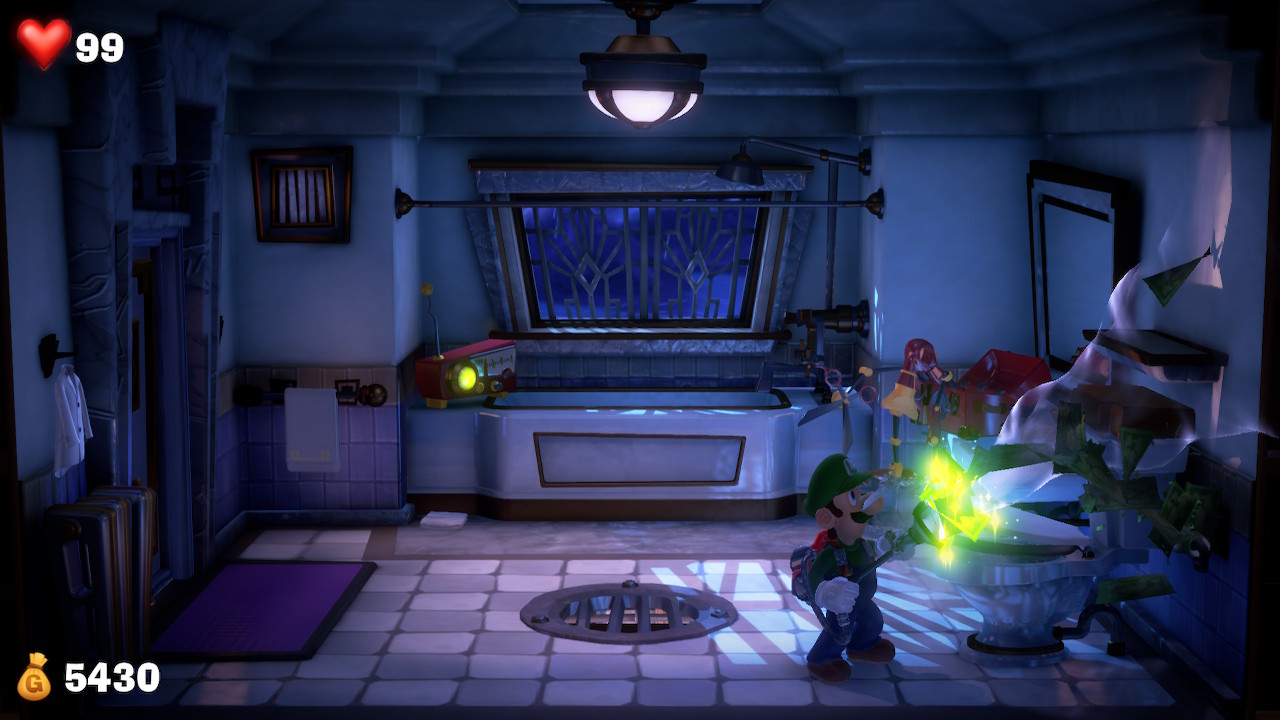 Toiler paper made out of money is my next favorite thing.

Your mission is to brainstorm in every room, vacuum everything that you can, solve puzzles, collect keys and progress through the hotel. You can do so with elevator, but conveniently so, all buttons are missing. Defeating ghosts grants you elevator buttons which can then be used on elevator panel to visit different floors.

Basement is a starting point, where you will soon meet and free Professor E. Gadd who will occasion call you and upgrade your Poltergust - model G-00. Later on he will open a shop on B2 where you can buy extra lives, ghost locations and gem locations on all floors. He will also send tips when you get stuck in some room for a long time. 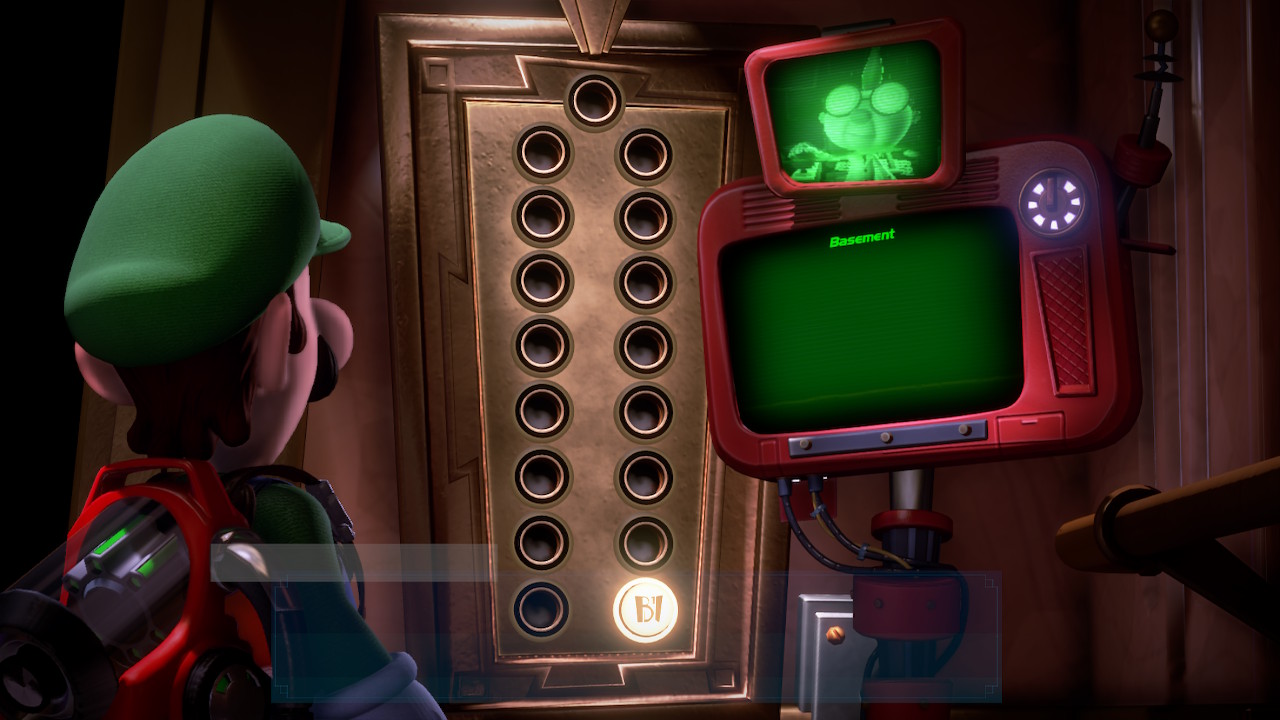 Yes, a lot of floors. Thing about it as a lot of fun that awaits.

Every floor is unique big time I don’t want to even spoil it for you, element of wow is better to be felt on your own. All of them are themed, like disco floor. And every single one holds crazy amount of secrets, mostly in form of gems, that will blew you away. You really need to think hard what you can do in single room, collecting all floor gems is not a simple task.

You can notice a swing in a room - simply shaking can revel golden ghost; a secret variation that gives ton of money if defeated. Same can happen in some rooms when you revel a secret, gem ghost can appear. Some rooms have a billiard table and vacuuming all balls in holes (hehe it rimes) will reveal a secret. Many walls have something inside of them; mostly money, but there is nothing more fun than vacuuming money in the air. There are even money toiled papers that you of course need to vacuum to collect. Amount of fun factor in this game is of the charts. By the end of the game there was not even a single item that I left on tables or shelves. 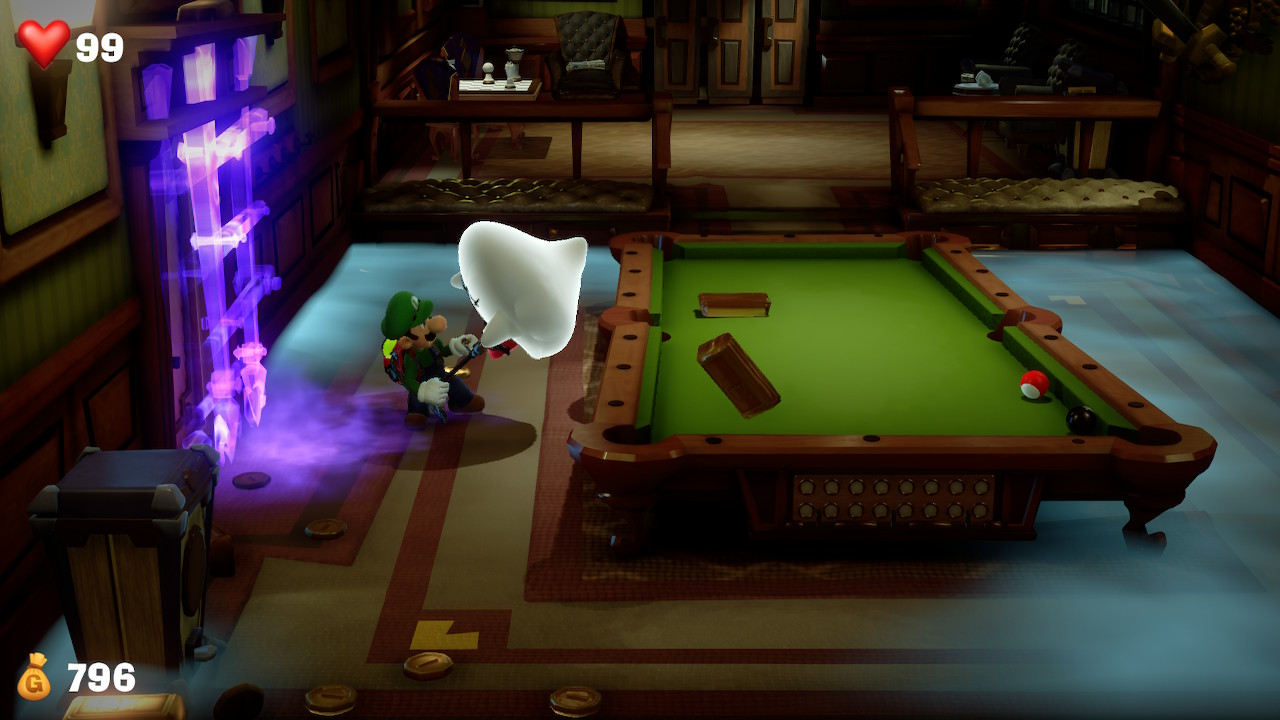 Boo ghosts are tricky to find. Joy Con vibrates when you are close. And look at those gold bar on the table.

Let’s go back to what we can and must do. Your main thing among the cleaner is a flashlight. Many places in this hotel require you to flash them – green power switches and any form of ghost. Before flashing a ghost, you can’t catch it. When you do, it’s time for vacuuming. They try to run, but you hold that button in different direction and when you fill the bar, pound them like crazy. When ghost have 0 health, you will suck it in.

Every floor will have a boss, every boss is unique. Still, some are simple, plus game doesn't offer a lot of enemy diversity which is a shame. At the same time it will be just enough, you will be busy with all the other things anyway. Fighting is fast and simple, it will not get on your way or on your nerves anyway.
Flashlight also has a reveal hidden objects and materialize stuff mode. It’s advisable to scan all rooms where you think wall is suspicious or there could be an item here – usually there is and you need to shine the special light. 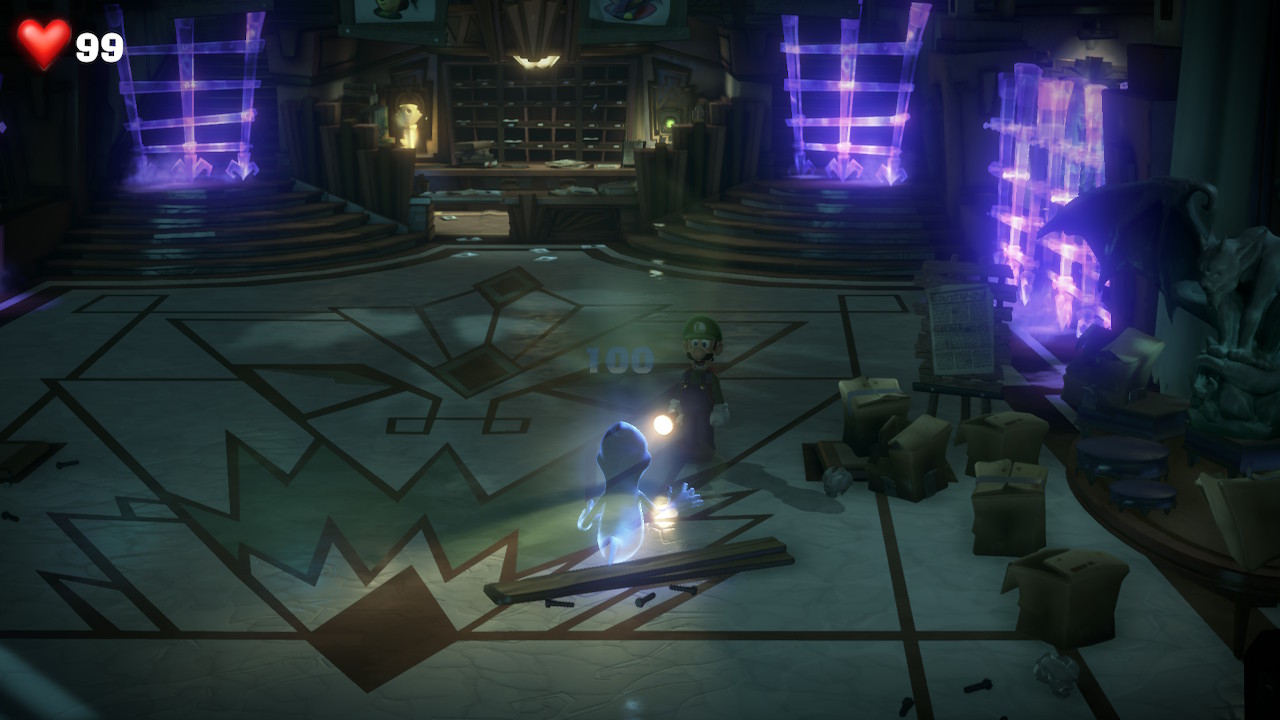 Flash them and slurp them in. Poor ghosts, they will never be the same again.

There are few modes for Poltergust – vacuum in, vacuum out, semi jump for avoiding ground shaking attacks, strong vacuum mode a bit later and that is it. Many puzzles will consist of lowering the bridge by vacuuming some propeller close, or by grabbing a ball and dragging it to pull its chain. The only bad thing is that controls on Joy Cons are everything but natural. I had so much trouble pointing in right direction with right stick. Camera is good but the way it is positioned doesn’t help when vacuuming. Still, by the end you will get good and just sometimes be frustrated with controls.

Last skill Luigi learns is a plumber mode; you shoot it out, if it’s meant to the plumb will stick and you can use your vacuum to hold it and pull out some boards or heavy object. 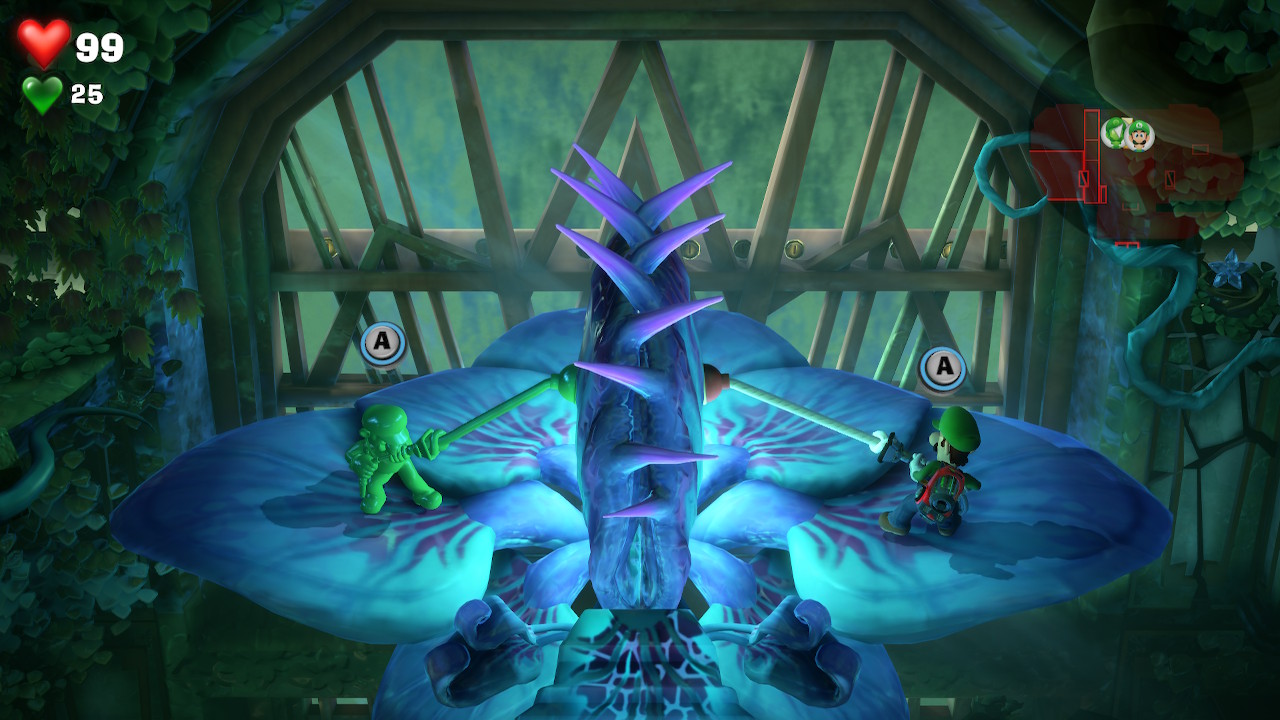 I was often retarded, not thinking that i have two guys and that i can combine effort.

I saved Gooigi for the end. Soon into the game you will get a green gel. Releasing it created Luigi made of goo. Gooigi can traverse through any metal bars, visit prisons, enter vents, fall in floor vents, but water is lethal for Gooigi. This is where you can play co-op since 2 players are offered. I was playing solo, but the point is the same – you need to use both guys to solve puzzles and reach keys. Some interaction points require that both Luigi’s vacuum to make it. Always be aware what you can do, there is always something you need to do to progress, if you can’t, you just forgot about some combination you can do.

It would be much better to play co-op as controlling both sometimes gets overwhelming and confusing, but only place where that happens are fights. Also, camera sometimes acts weird when there are both Luigi’s on the screen, you will just have to disband Gooigi, otherwise camera will rape you. 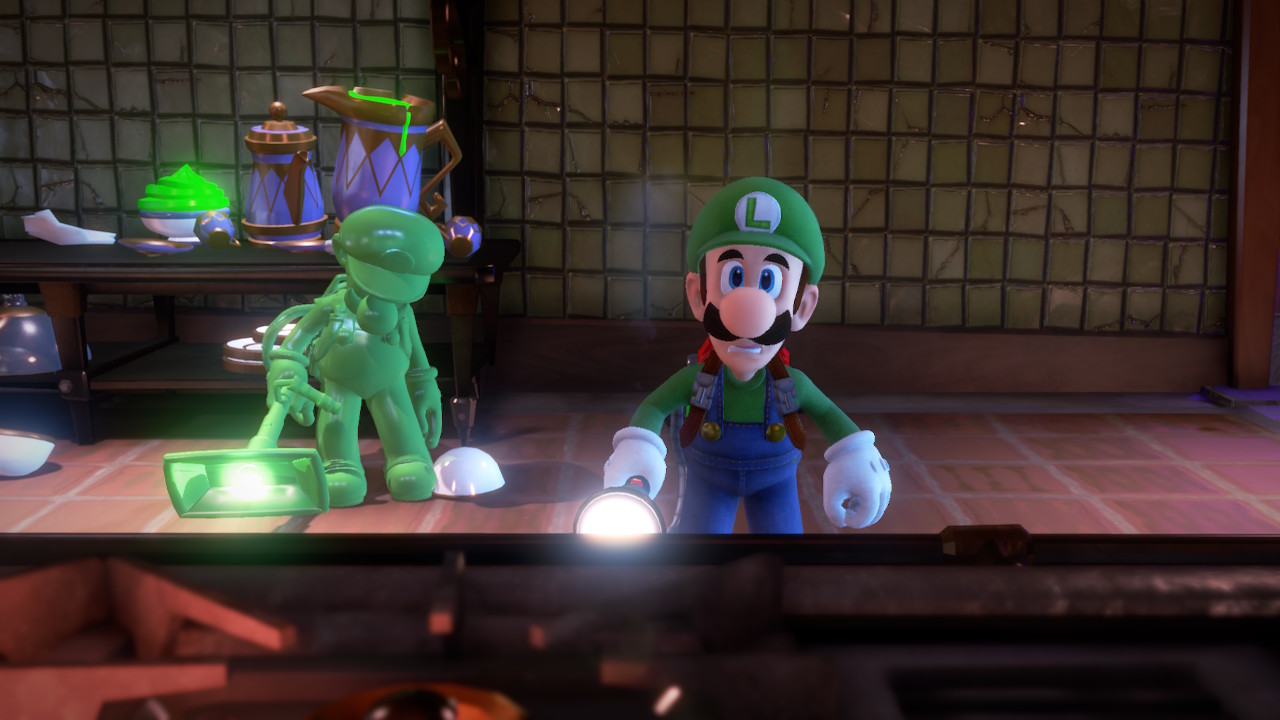 Gooigi is super gooi. You can use him as a bait, he dies just to go back in your backpack.

Game runs smooth, graphics are candy, and presentation is great. It will take around 15 hours to finish the game while collecting most of the stuff. It is just enough and let me elaborate.

I really miss more upgrades to your weapons, more possibilities and more mechanics to it. Just few upgrades through the game can mean it can get dull quick. Luckily that is not the case here, but you will feel that near the end. There is so much potential, I’m sad they never went with more, this could raise the grade more and overall experience even better. Even collecting everything doesn’t reward you as you would think, and playing the game again – not much replay value. 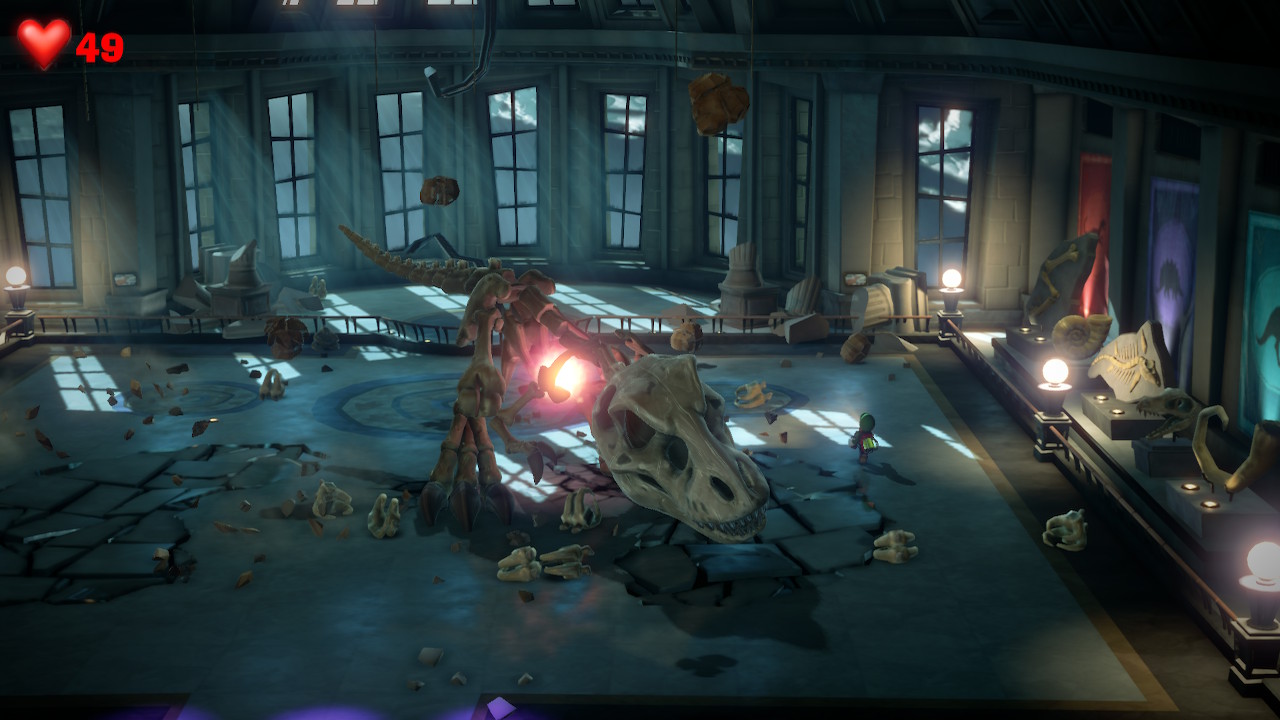 Every boss is a unique experience. Awesome stuff!

As for multiplayer goes, players can engage in cooperative gameplay through "ScareScraper", a returning feature from Dark Moon, or competitive team matches in "ScreamPark". Whatever suits your needs if you want to extend the fun. I’m more of a solo single player guy, so this multiplayer aspect does not interests me much, I’m just glad they included it, it is great for party with your friends. It is local or network type multiplayer. 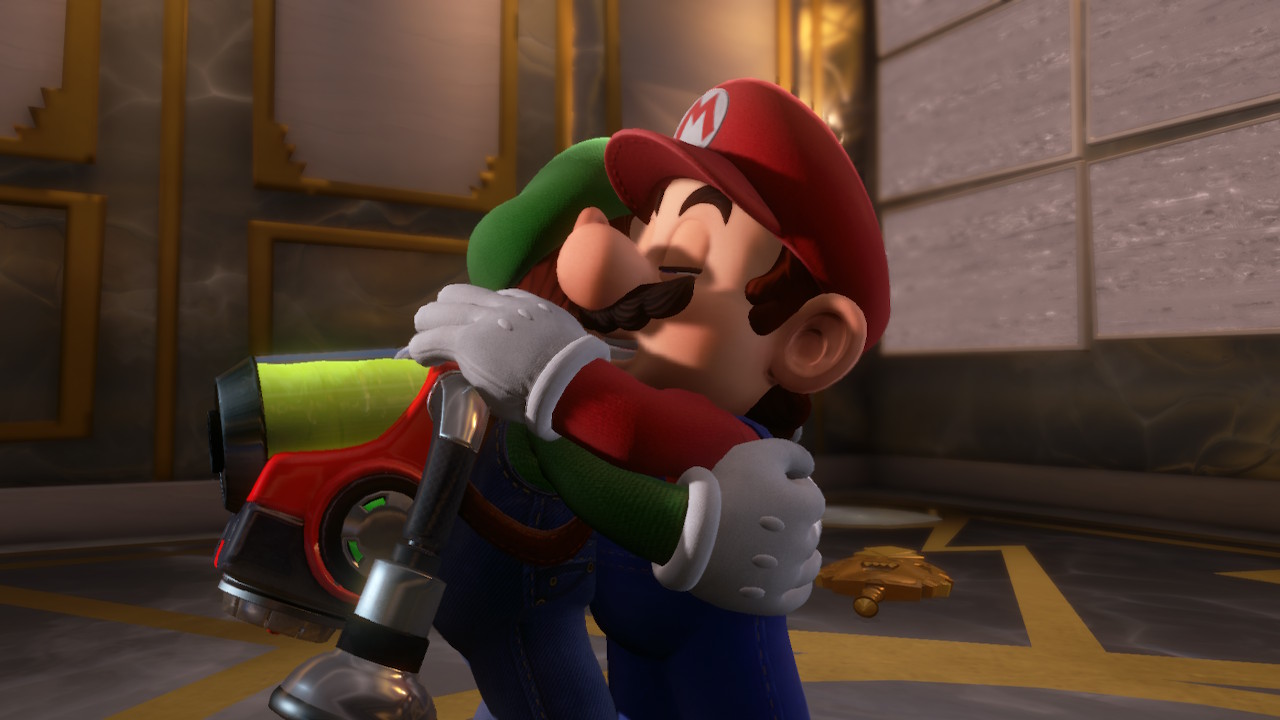 There is no such thing stronger than mustache love.

I have to admit, it’s never been more fun lately. All Nintendo titles I play are what reminds me why I loved the gaming in the first place. I though often that is because I liked it as a kid, but now, when I’m grown up, I just want to play over and over again. Some games just know what we like and does things as they are meant to be done.

On the other hand, I’m glad that good franchises continue to develop and exist. It took great amount of imagination to create this world and design so many puzzles. And to create fun that we will enjoy in. That’s everything. Luigi is everything. Hide your money in concrete walls, detach any power circuits – Luigi is crazy and he will steal your money in no time. Oh, and don’t worry about Nintendo ripping you off. They deserved this money.

"No point hiding your money, Luigi will vacuum it anyway"