"Jill and Nemesis, sitting on a tree, one false move and dead you will be. The joy of messing around with Nemesis is once again back, this time in full 4K and more frustrating than ever!" 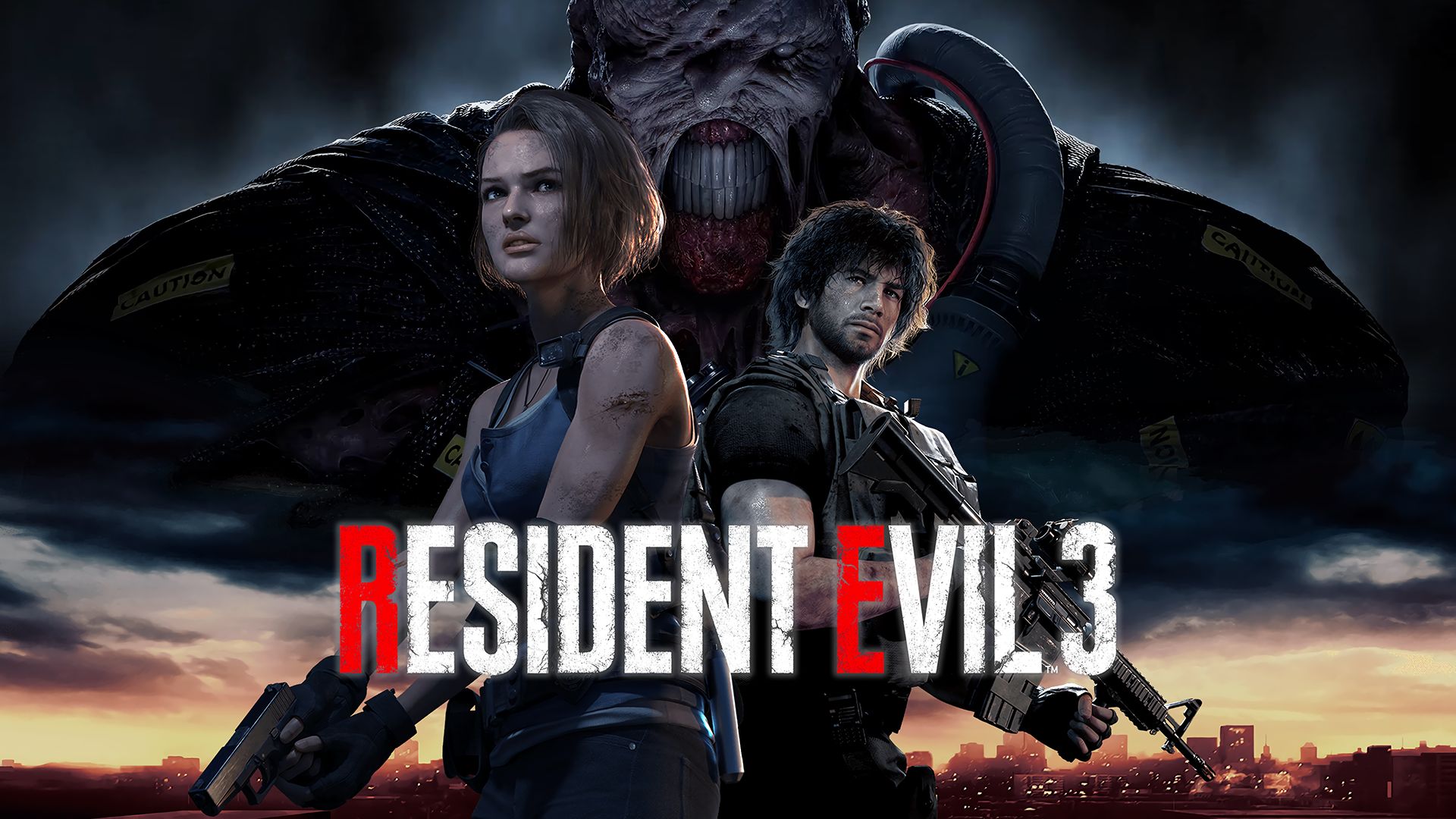 Resident Evil was always synonymous for survival horror. I remember from my youth how I had nightmares after my dad played these games. Now, I’m not scared, I just miss that horror and gore that RE brought to the industry. I miss the survival part of the horror as well.

RE3 is yet another remake project from Capcom. I praised this company for the whole past year, RE2 remake was to simply put, a masterpiece with just few downsides and I expected nothing less than that with RE3. They did it, almost…Not everything is great, even flawed and degraded in comparison to RE2 remake. 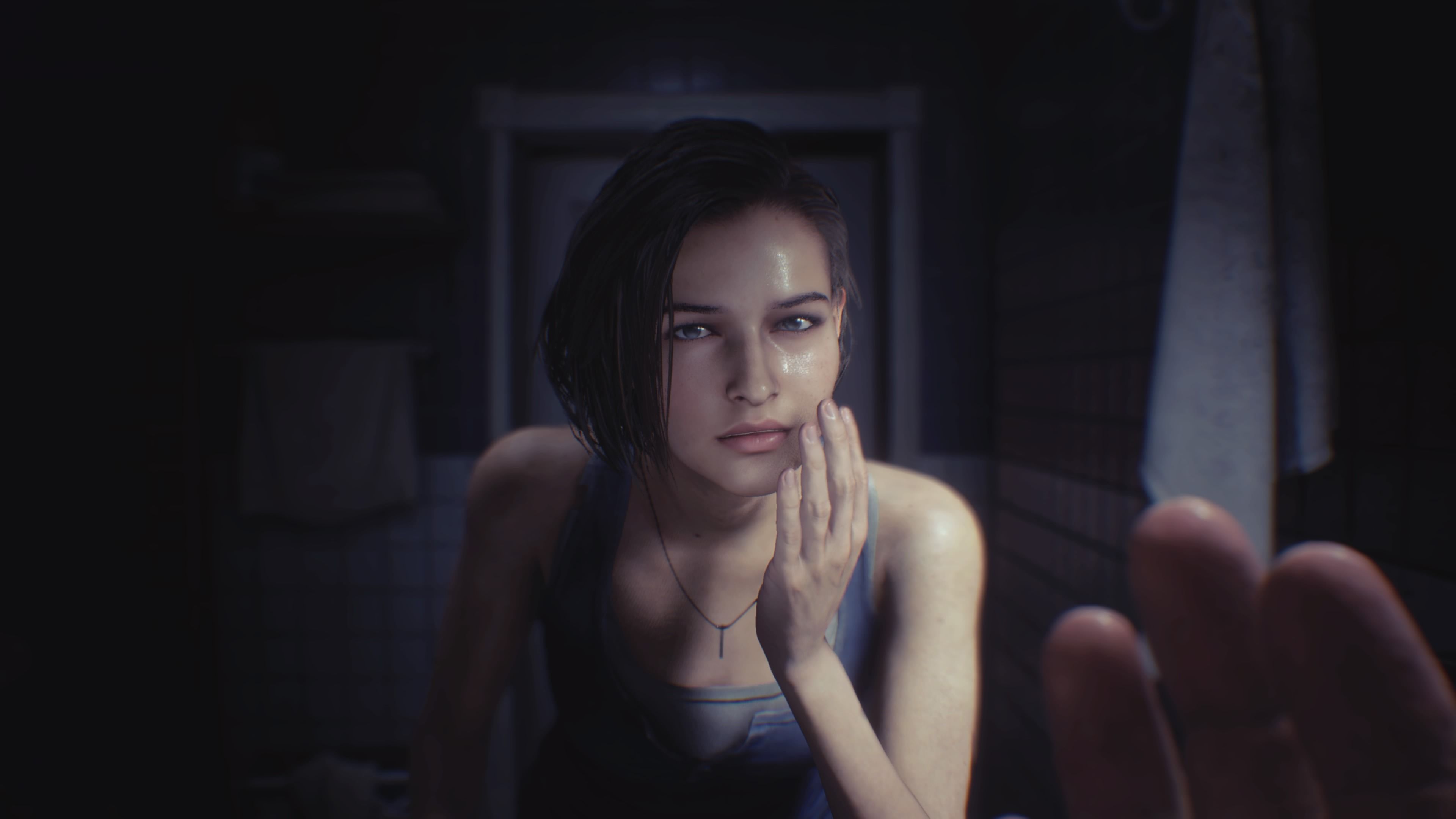 The horror starts in your room. Usually it is that way.

You remember Jill, thst fine piece of ass from Resident Evil, the first of the series? She survived the horror in 1996, later in RE3 original game and now again in the remaster. What did she do to deserve this again in 2020.?

I can’t even imagine that RE3: Nemesis got released more than 20 years ago. It was a short game, but more action oriented and featured Nemesis, a villain that made your life harder as you tried to survive in the infected Racoon City.

It all starts when Jill Valentine gets attacked in her apartment by an Umbrella-created intelligent bioweapon known as Nemesis-T Type, who attempts to kill her and all of the remaining members of S.T.A.R.S. You will hear the ruckus and “STARS!!!” from the near distance. Embrace yourself, shit is about to go wrong.

A nice addition here is that the story starts few moments earlier than in the original game and that is the first big change of many more to follow. This review will be independent of comparisons as they wanted to create a new game by changing many things, even cut some parts, but also adding some. Let us focus on this game and not look back as much. 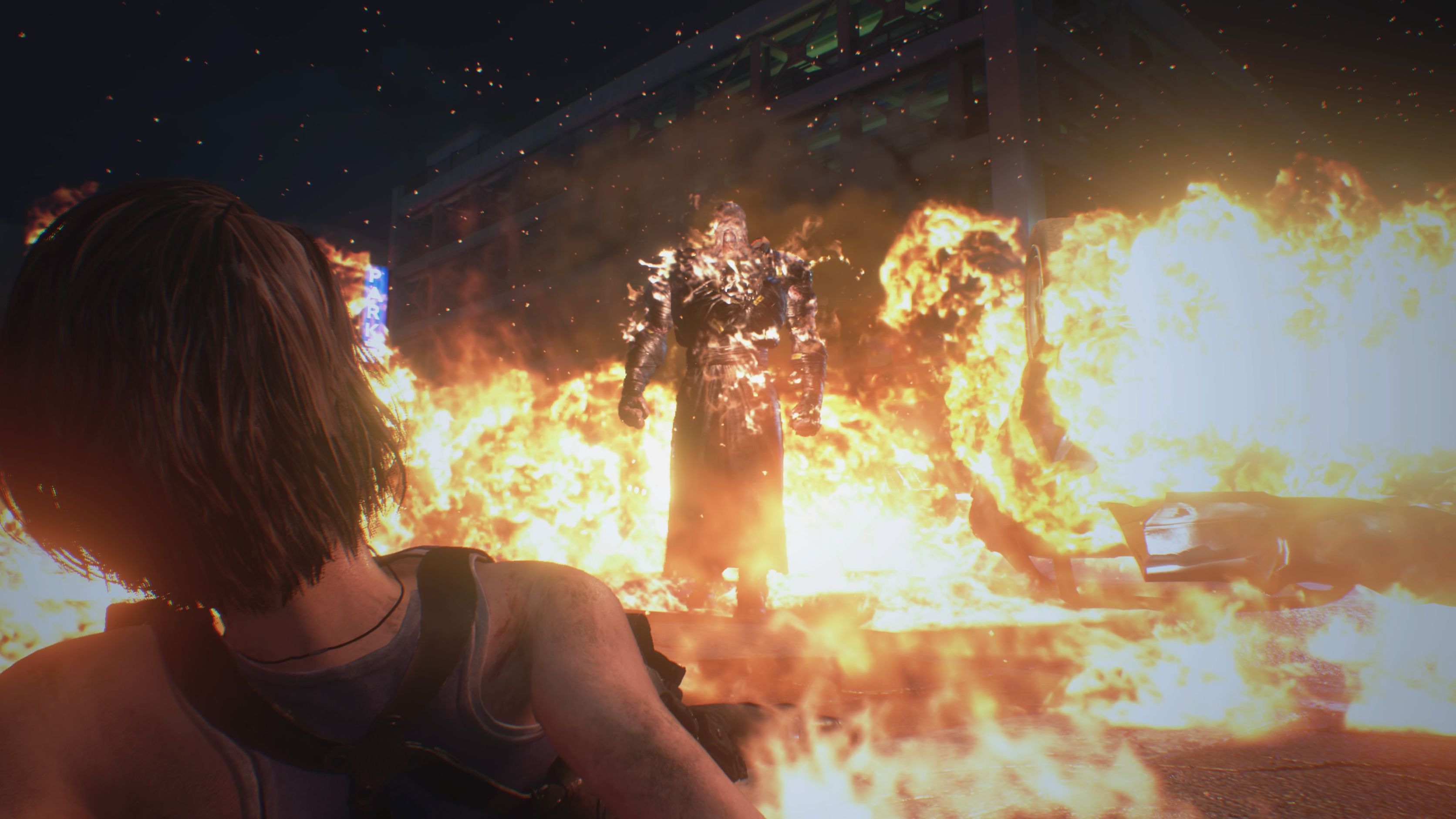 I know I would lose my mind if something like this happened.

I really like Jill. She survived some nasty situations. Now, she is up against the worst zombie yet to exist. The first few scenes are basically a running from the terror while he throws parts of the apartment walls on you. I felt sorry for Jill, she was just trying to leave this place and the worst thing happened.

This beginning is what dictates what kind of game is in front of us. Horror, survival, but more action oriented than any sequel in the series (so far, if we look at this as the 3rd one). Nothing to worry about though. You will feel chills down your spine every damn time when this fucker decides to show up and harass you. At the same time, he is so frustrating to deal with, you will just feel the urge to turn around and shoot him until he kneels. 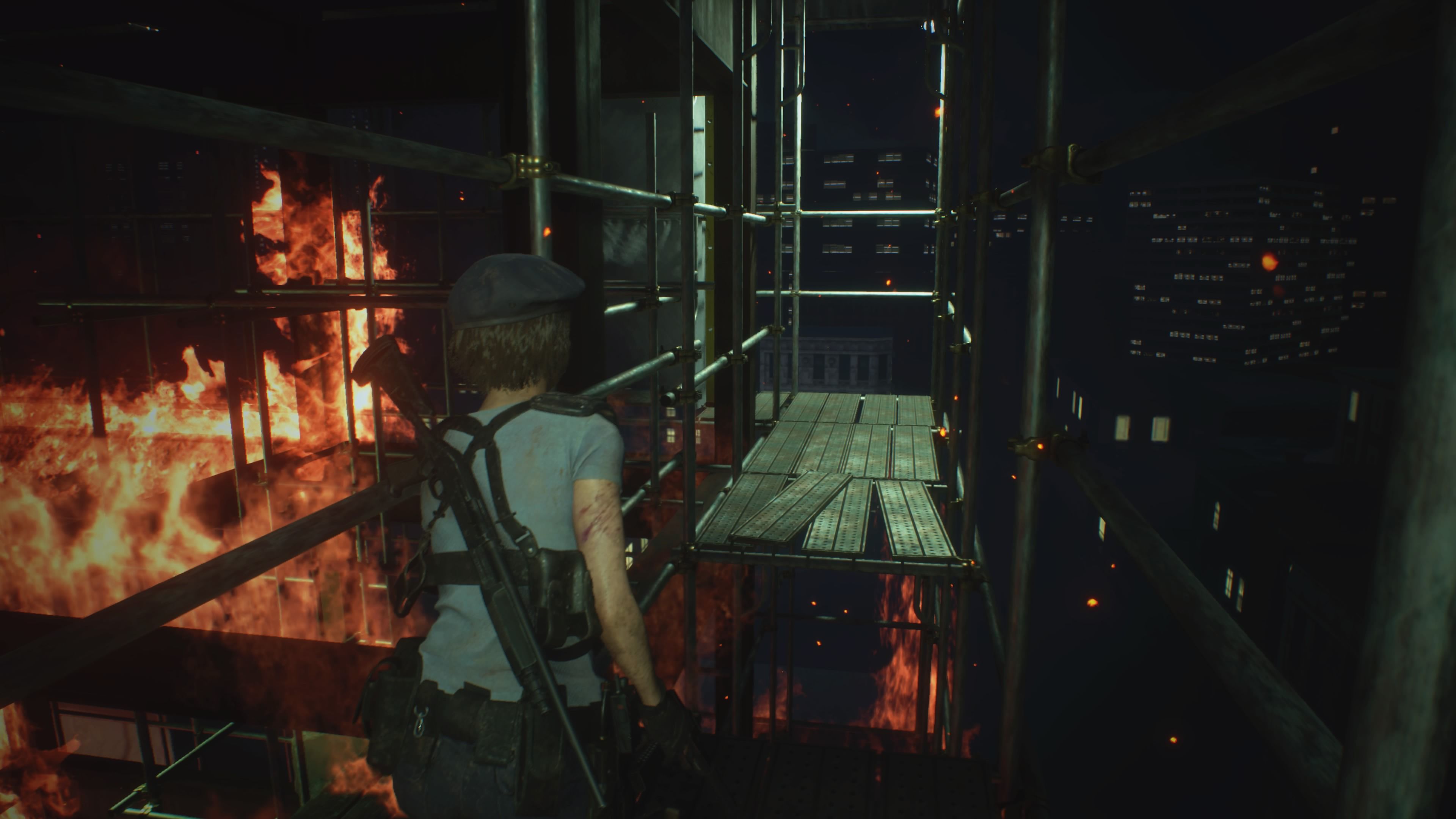 You run while Nemesis burns the ground beneath you with his flamethrower.

Soon you will find yourself where the actual game starts and make your way towards better days. When it comes to graphics, it is even nicer than in RE2 remake. But, there is a but. I don’t know if it’s just me, but the lip syncing is the worst, at least when it comes to NPCs other than Jill and Carlos. Also, they are done so poorly, it unmotivated me from enjoying the story. This is tightly combined with the scenes in the game, which I found to be mediocre or just cringe. In one moment, you are talking with the guy in the train, the next he is dead and the scene made no sense whatsoever. If they wanted to experiment, let us look objectively at what they did. They did poor storytelling, mediocre and short animations and awful NPCs. I expected wider perspectives of the game, its story and characters. Hell, the whole outbreak is just here, I had to read all the files in the game to connect the dots.

I wanted this segment to be better, that it made more sense and I wanted scenes to be longer with much more explanation about the story and everything that happens. It feels like they were lazy and rushed. This was the perfect opportunity to raise the bar one level above. It’s not that story was great in this sequel, but it had potential to be presented even better now.

Carlos got his extended minutes of fame, but I don’t feel anything towards him. He is just there and does his thing. 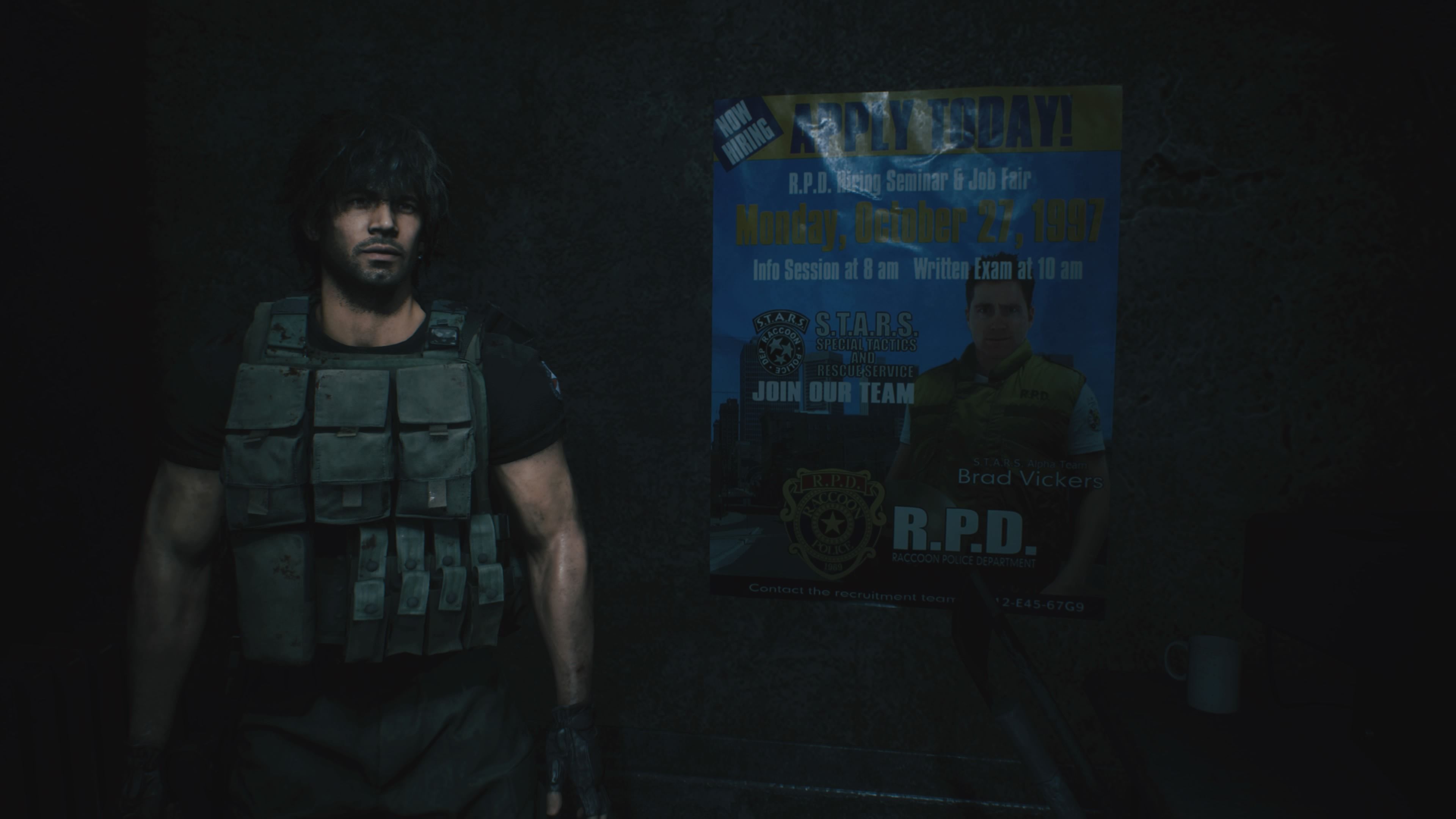 What I love is the gameplay. It is even better than in RE2. You can now dodge with R1. As soon as you are about to get hit, you can dodge and preserve your health. A perfect example of what will await above normal difficulty.

Another new thing is the knife which now cannot be broken. That adds to your strategy. The rest is the same – collect bullets, weapons, upgrades and expand your inventory. All of that will help you survive and either complicate things, or show as the winning solution.

I often listen to complaints about limited inventory in 2020. Well, this is what made the game unique and what turned out to be main strategy. You need to learn your patterns, carry what you really need and plan your routes. Almost every backtrack will throw new situations at you and it feels fresh. 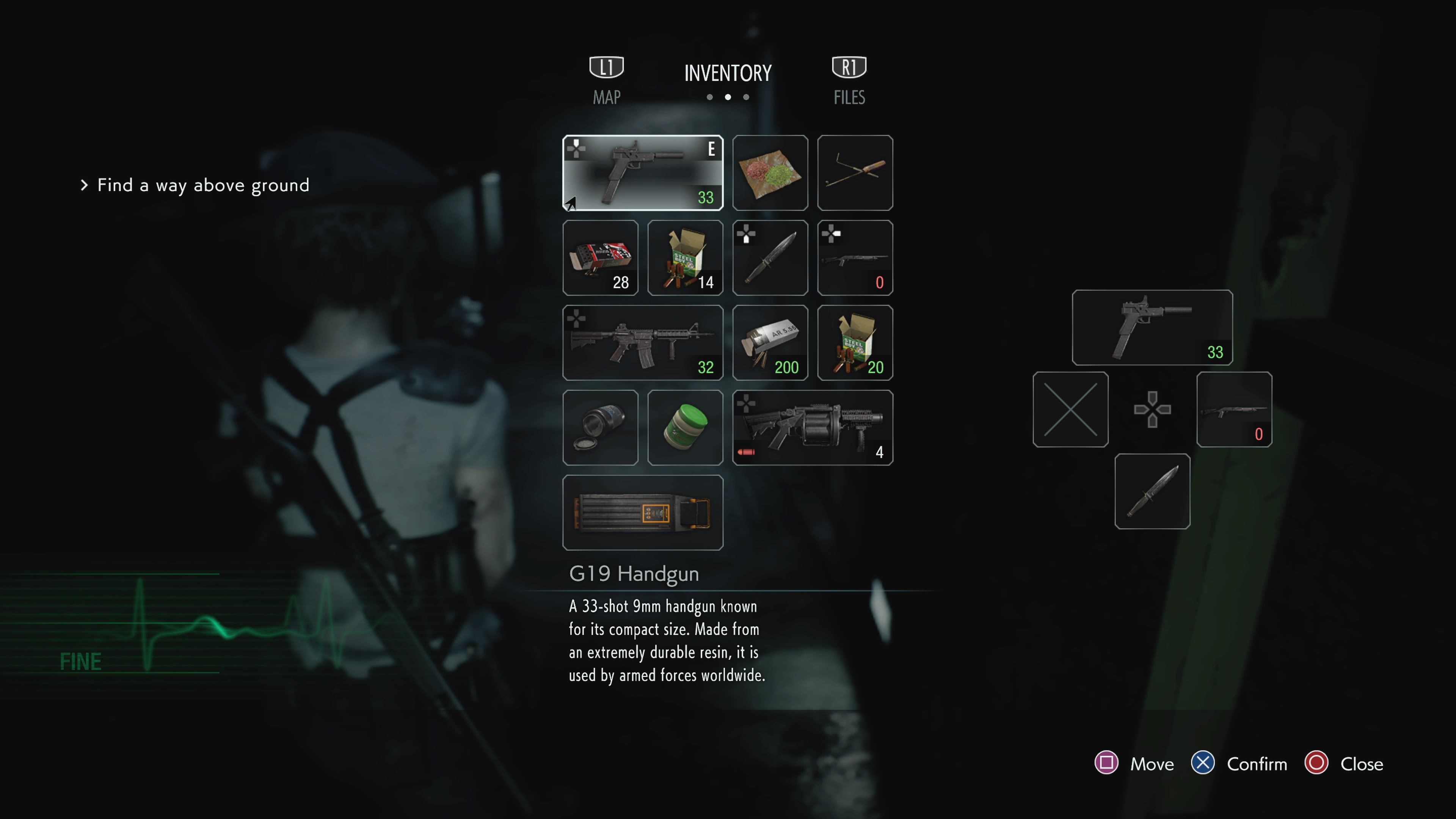 Half of the game will be spent looking at this.

The biggest minus in some survival horror game after seeing what they can do are the puzzles. There are literally 3 puzzles in this game and they are too easy. No challenge for your brain whatsoever. All you will do is collect key items like pliers and lockpick and go back where you can use those. Usually that will reward you on each difficulty differently, so it is worth it.

The hospital area and Carlos got rebranding and extended cuts. This is also a plus. I love the freaking hunters and how they can one hit you by slicing your throat. I love the atmosphere and sound effects when some nasty shit is about to happen. And there it is, 2 hunters in one room. Lovely. 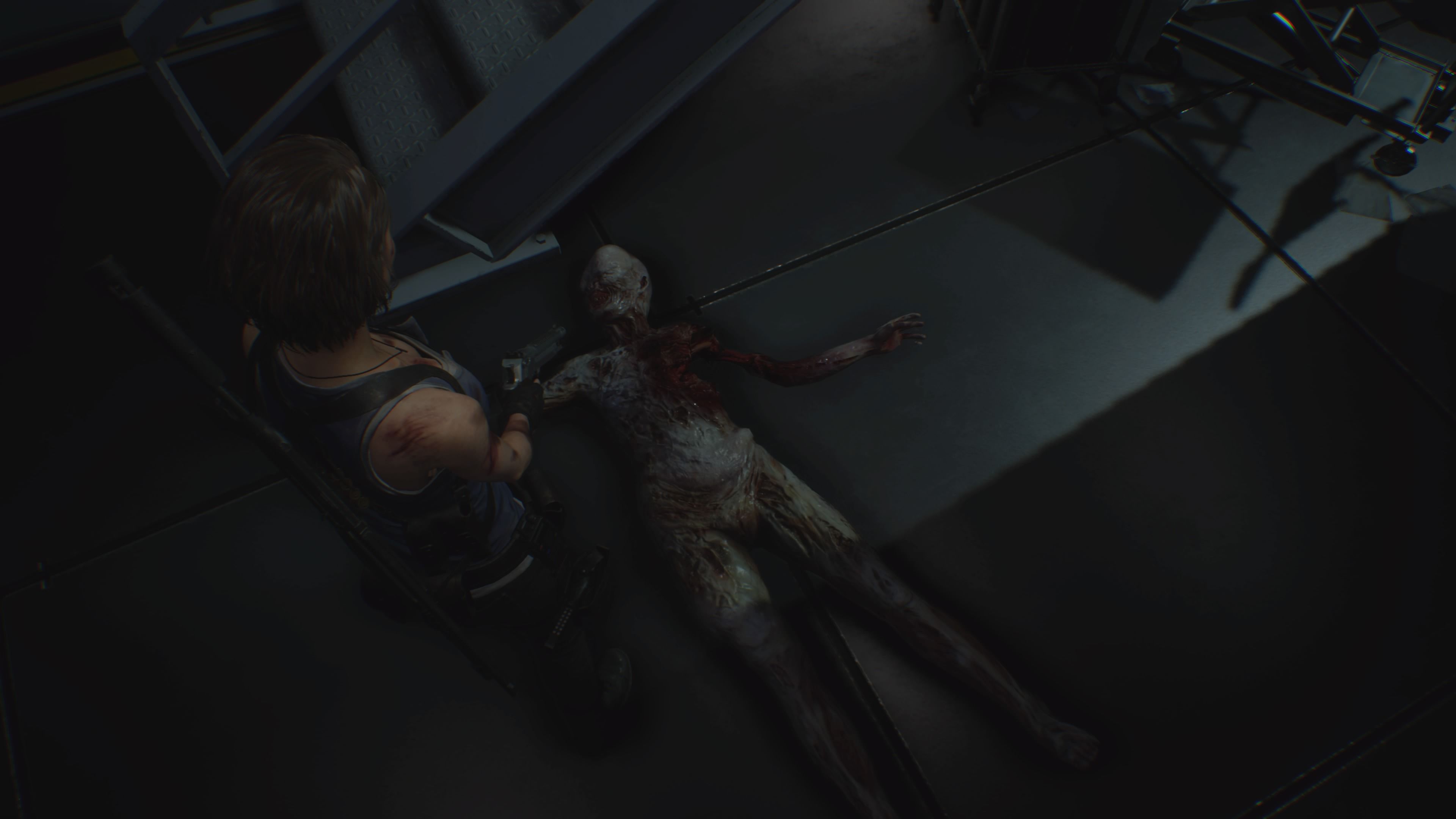 If smoke comes out of this zombie, it means yet another grenade is needed.

This is a very linear game. Even though, you can find many references and posters across your way forward. Most of the time you will just run ahead and think about how to survive.

Expect Nemesis to hunt you down often. The first half of the game he will visit every now and then. You need to be fast and know where to go, because you will get punched a lot. The only way to slow him down is to throw a bomb or spend all your bullets until he kneels. That lasts only for some time! I hated the guy; I couldn’t explore in peace what opened as I progressed. It's a job well done here! I literally hate the guy.

As this game is very oriented on him, there will be a lot of boss fights. With him of course. Save your bullets, you will need them. The good thing is that you can use your environment in many places to stun him or blow things up, which will help preserve your ammo and will give you some time to think. Overall, those fights just require bullets. Strategy is always the same, easy I would say. Until the end, that is… 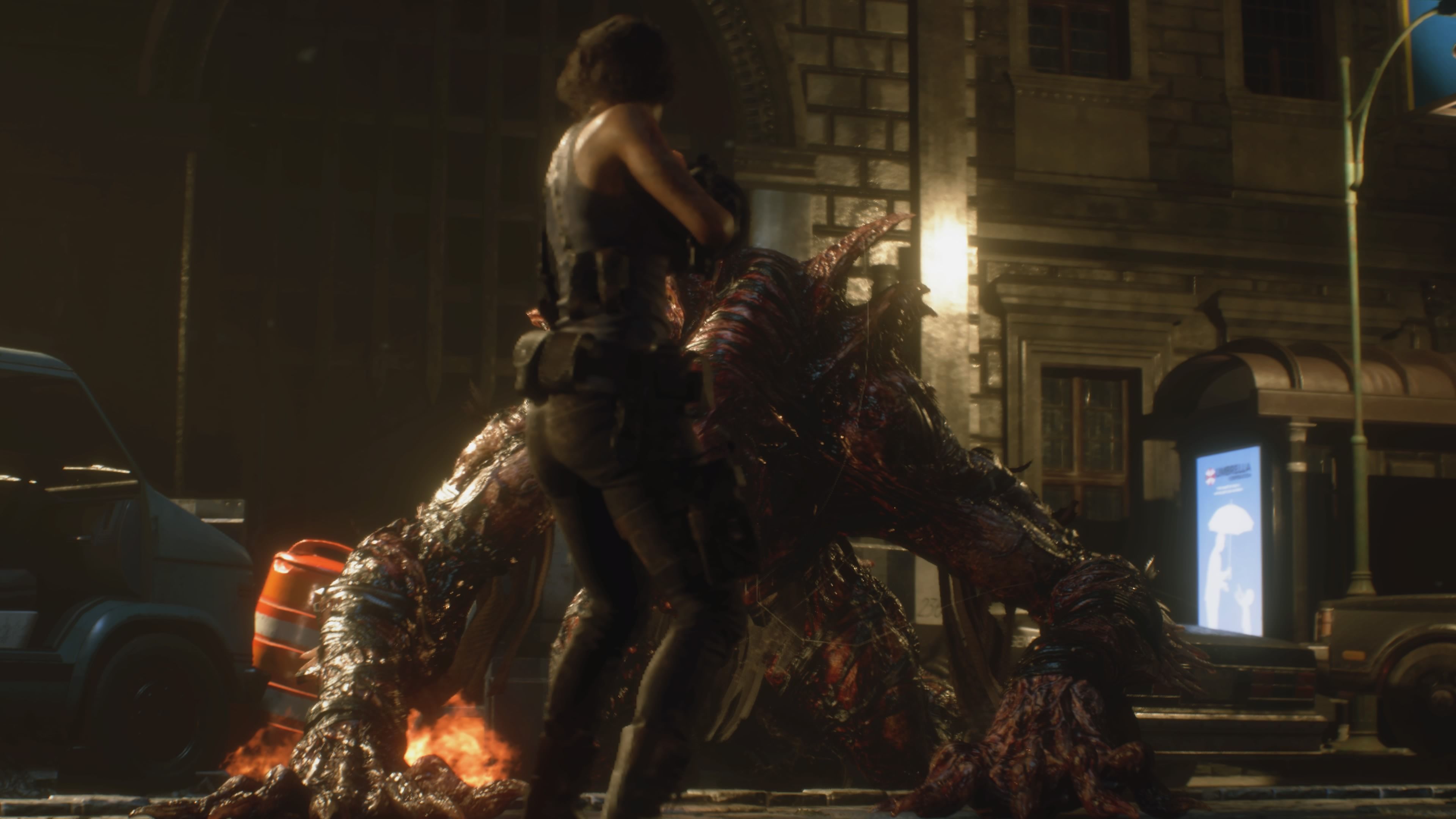 Nasty Nemesis only gets nastier during the fights.

I said many positive things. I want to get this straight – all those good things are packed and paced poorly. Jill was supposed to be a badass, but with scenes that short and awful NPC’s, I never got to feel her full potential. It just feels like an action game. And that segment is good! But all in all, I miss that something that RE2 remake had.

I know this is a shorter game, but some people will just finish it once. That is in 5 hours we are looking at, 7 tops! To pay the full price for a game that short is too much. It also feels rushed in many ways, so when you do the math, it’s not worth the full price if you really aren’t into it in the first place. 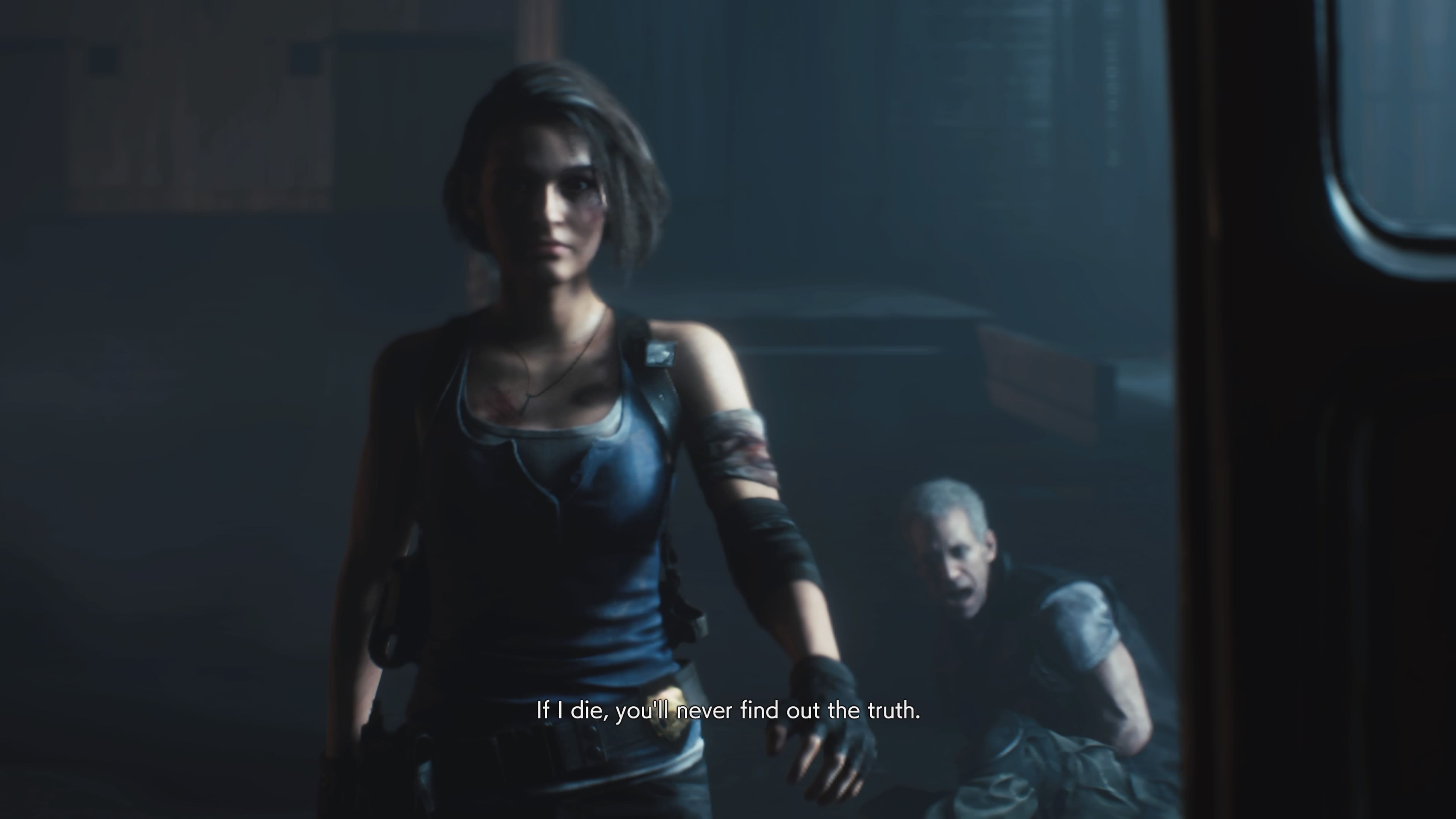 Jill's face expression is the perfect sum of what to expect of this story.

Where the game shines are in the different difficulty runs. Some will change your flow, so you will have to experiment with different paths to choose, enemies you face and so on. The beauty is how they throw zombies where they usually aren’t any. Even groups of zombies have more in their packs on higher difficulties and require a different approach, no way you can make your way through by just killing them. I felt really good when I was replaying the game and they changed some things to make it both challenging and fresh.

You will unlock the shop where you can buy unlimited ammo and some other perks to make it easier, I think they even did this because the game gets really hard without them. The highest difficulty will remove auto-saves and bring you back to how it was – no save, no progress. I’m just sad that the puzzles remain the same, while in RE2 they changed how those puzzles run. 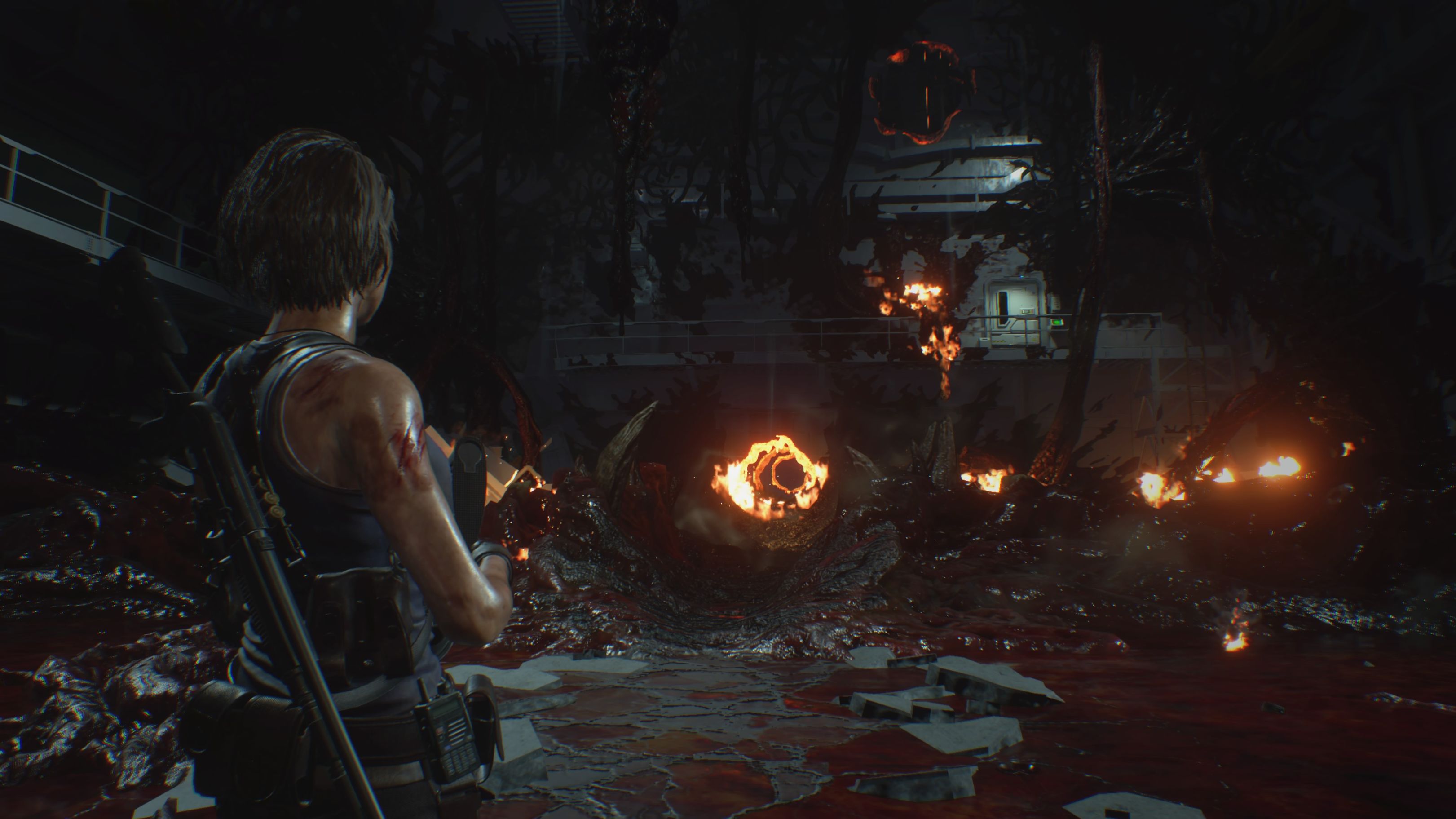 I think hell itself is in much lovelier shape than this place after Jill.

RE3 is a decent game. It shines in its action segment but draws back in almost every other. It is not a bad game, even the length is like in the original, but knowing what Capcom can do, I think they can and need to do better. You just can’t raise the bar so high and then lower it.

It is easier to remake something when you have all the assets and the whole framework done, but then you go for the content and quality! That is partially here, but mostly it feels underwhelming and rushed. I’m just angry that they did this while they could obviously do better.

You know that feeling when you finish the game and you just miss that little something? Something that you cannot explain with words, something that is just not right. This game has this syndrome. It is worth a little more than half of the full price, but paying the full price can be too much.