"Swing your way through New Your City and of course save the world (city). What we have here is the best Spider-Man game that is what games are all about - fun. " 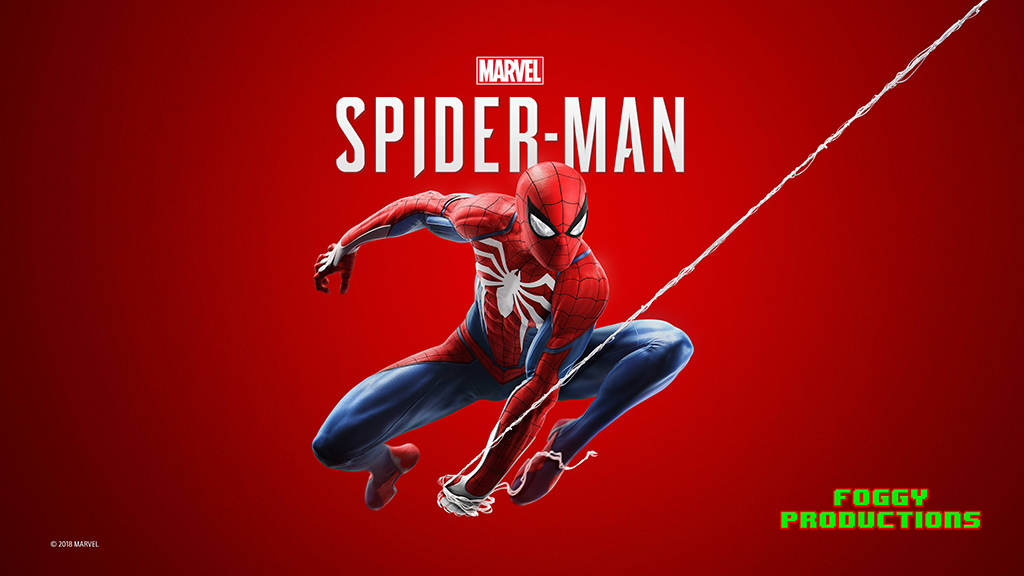 Marvel's Spider-Man is an action-adventure game developed by Insomniac Games and published by Sony Interactive Entertainment for the PlayStation 4. It is based on the Marvel Comics superhero Spider-Man and it was released worldwide on September 7, 2018. It was the first licensed game developed by Insomniac. Hopefully it will not be the last, they did a great job with this one. It proudly carries the best super hero title. Is that true? Let’s find out in this review. 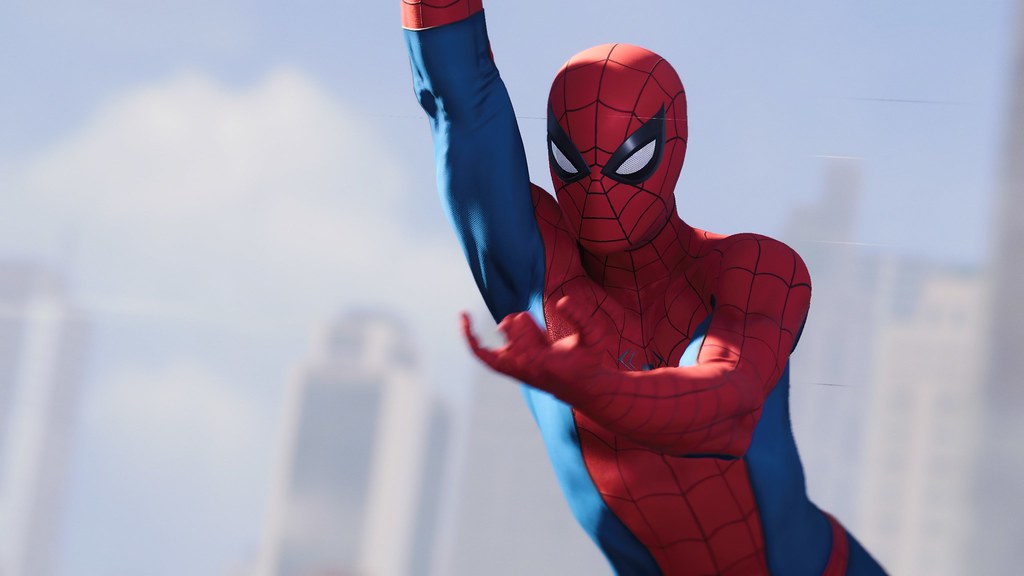 The amount of details is stunning. There is no difference between the game and movie in terms of graphics.

As soon as you go on your swing adventure, game kicks with its mechanics. You meet Peter Parker and his Spider-Man skills. The rest is you trying to save the city from bad guys. The story itself is nothing spectacular. In short it is a story between Demons (a group of bad guys) seeking something called Devil's Breath. There is no real twist and mind-blowing story moments that will blow you away. It is still a decent experience, just not something we will treasure in our memory as something out of this world. I can imagine that after so many super hero movies and games it’s hard to come up with something new and fresh. But fear not, everything else in the game is super fun. 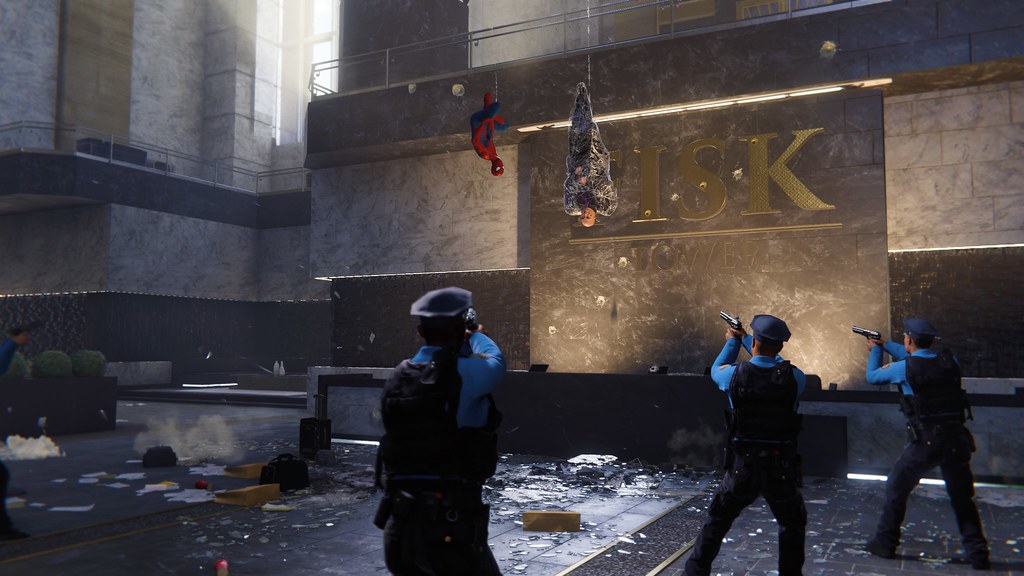 How’s it hanging? Putting your web in good use.

Where game shines the most is definitely in action. Peter’s movement pallet is amazing. More or less you will find yourself hanging somewhere and you will need to dispose enemies. Approach you take is up to you completly. You can spend whole time on the wall, jumping around and just using web to capture enemies silently. When that is not satisfying enough, jump in the middle of the room and start kicking. They put so much effort into fight mechanics making it super fun.

Mashing attack button will help in first few seconds. After that dodge comes in handy.  Peter is, I guess, like every spider equipped with sonar! You will sense when someone is close or about to attack you. There are so many ways to dodge and plan your next move, like for example some types of enemies require to slide under them and kick them from behind. Some will require that you dodge and kick them in the air. When in air they are on your turf. Here they can be smashed in the ground, into other enemies or simply kicked. After some time you will find best ways to combo your skills and use best finished moves so that you can just enjoy the fights. It’s like watching a movie when you get the hang of it. 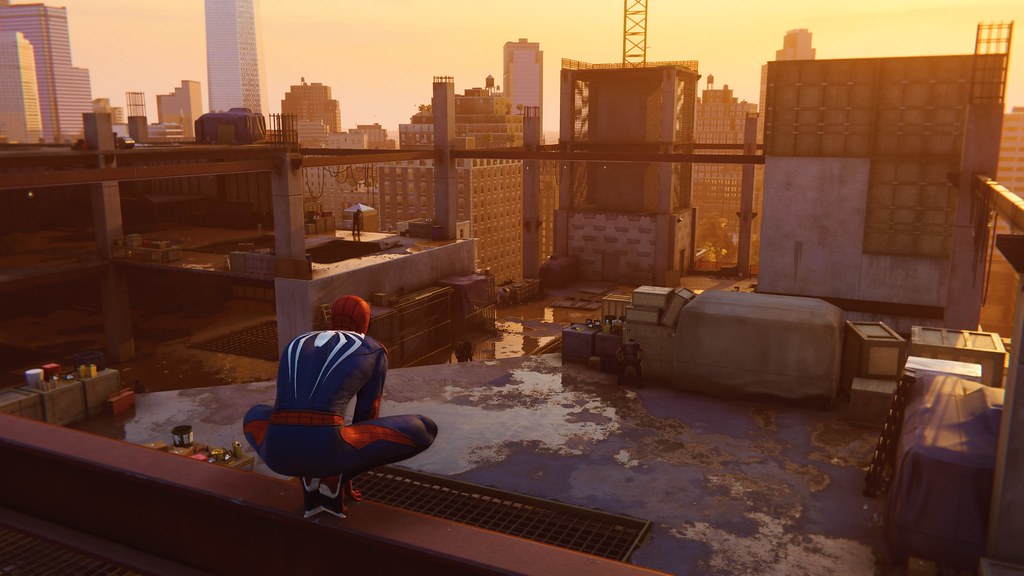 Combo mechanics are so good. The more combo of attacks you have, the more possibilities you will get. Your combo bar fills and you can use finisher moves, which will single kill your target. There are many, depending are you in air, ground, which position etc. Very cool. Every area also has usable object that you can throw at enemies. Mostly you can use to stun them. This will come very handy through boss fights.

I can’t say that this is new since we’ve all seen that in Batman franchise (where first sequel was in my opinion the best of all super hero games). But at the same time all of this feels fresh and it never gets dull. 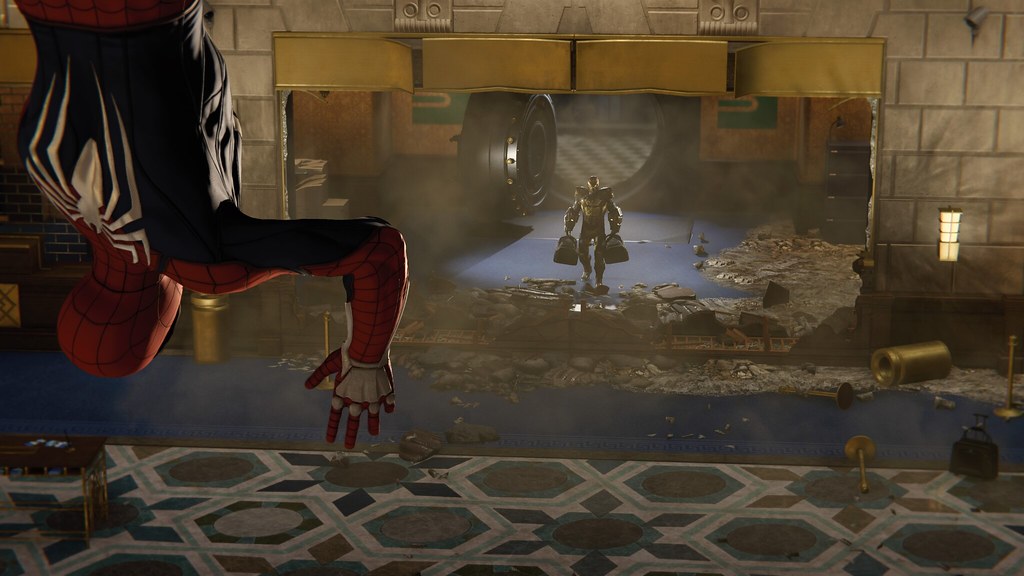 As you go on the journey swinging your way through town, you will level up. It’s a mini RPG approach which I always find welcome because it gets a bit more into character and development itself. Up to level 50, Peter will gain health, damage, skill points and so on. Very basic and not much to do here. But skill points are for skills. There are couple of them grouped into 3 groups and they will help to grow Peter into real combo maniac.

Naturally there are gadgets as well. Basic one is your web dispatcher which will stun enemies or if they are close to a wall, stick them there. There is also one which is stronger version of the web, spider drones, wall trap and so on. You will need to use them on certain types of enemies or bosses. All of them can be upgraded using points from challenges or quests from the game. We will get into that soon. 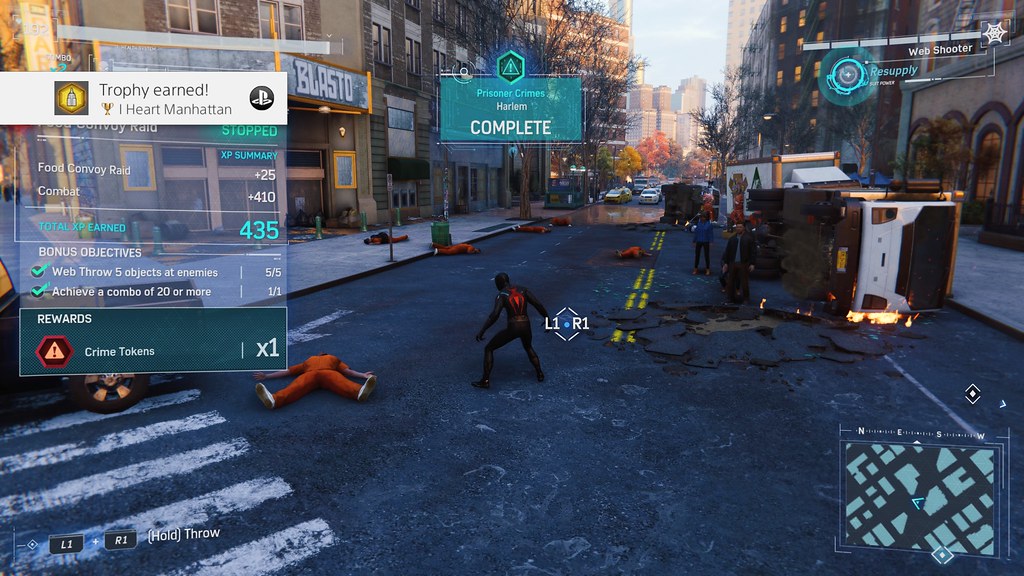 Objectives can be tricky if you have no idea how some move is performed.

Lastly I would mention also suits – the cosmetics. There are so many cool outfits that you unlock and use. They also require some points collected through the game for unlock. Certain suit brings the certain aspect of abilities (power) limited only to them, so it can be also a tactical point. I was more or less using the default one and did not bothered so much with this. 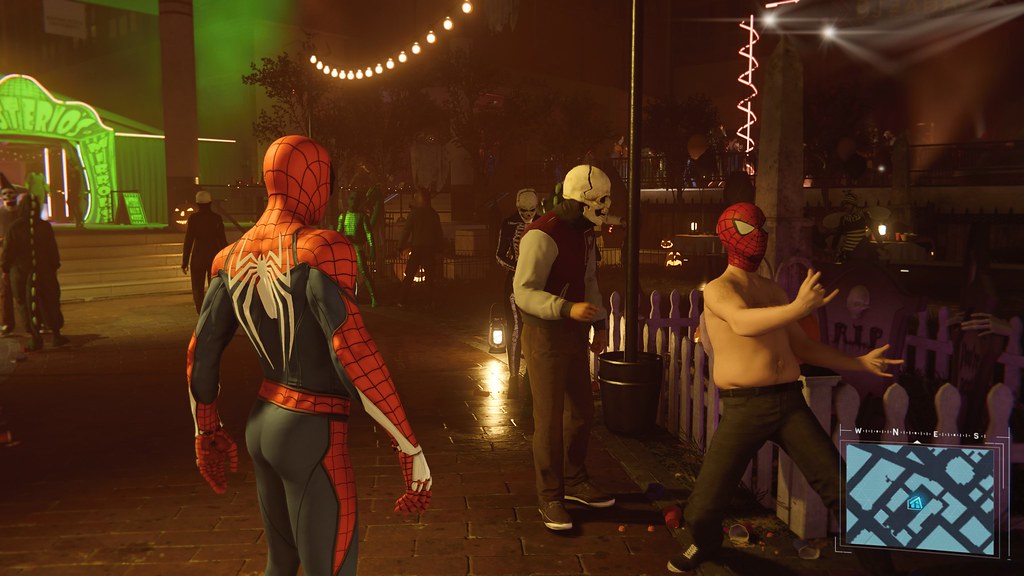 The Spider-Man on the right is clearly bitten by a fat beer loving spider.

Your journey is in New York. Mostly you will only look at the rooftops since most of the time you will spend there swinging towards next objective. There is fast travel, but since swinging is extra fun and fast, most likely like myself it will rarely be used. The Town is divided into couple of districts. Every district has some side missions, few collectables (like backpacks to find, locate some cats, solve something) and random fights. The whole open world concept is not the best what we’ve seen. All those things you can do for 100% completion is ok-ish at its best. It’s tolerable because fighting is extra fun, like mentioned. Side missions are more or less fetch quests, locate this and that and so on. Nothing worth mentioning.

The side stuff will grant you different category points based on your performance. Some base clean-up missions can for example give you 3 points if you silently kill 4 enemies and with that performe 30 hit combo. Then you spend those on upgrading gadgets or unlocking different suits. All can be replayed, so no worries about missing something. 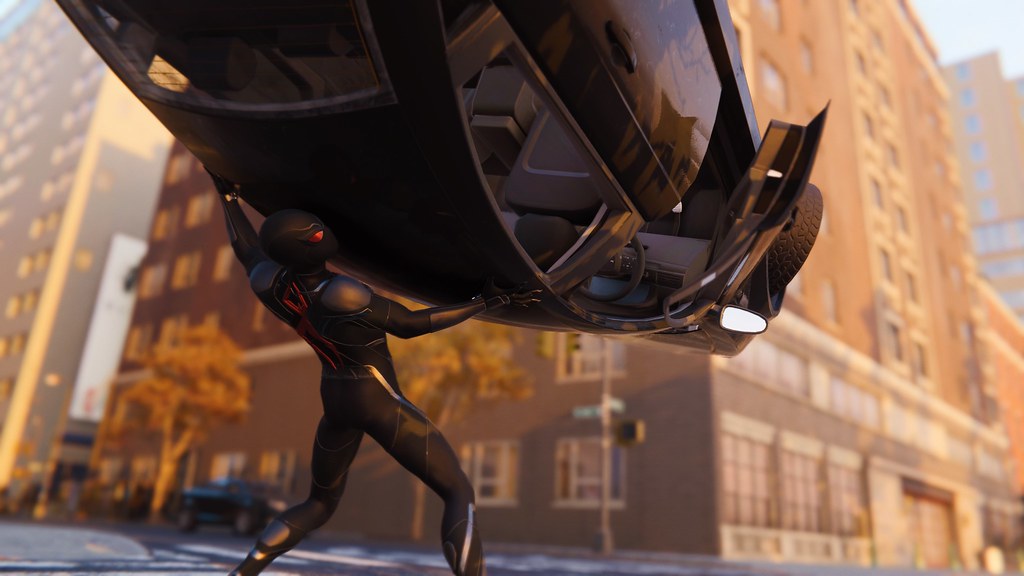 Peter is a big talker. He will come up with jokes all the time when you are traveling, fighting, walking, you name it. Mostly those are bad jokes. But Peter is also a boyfriend material. Guess what, you play some missions controlling Mary Jane Watson and Miles Morales. Mary is Peter’s badass ex. Her missions are stealth ones where in some Peter comes to assist. I find them a bit boring considering how amazing spider-man is. Miles is Peter’s friend which you meet through the story and his missions are mostly the same – stealth your way to the end and that’s it. 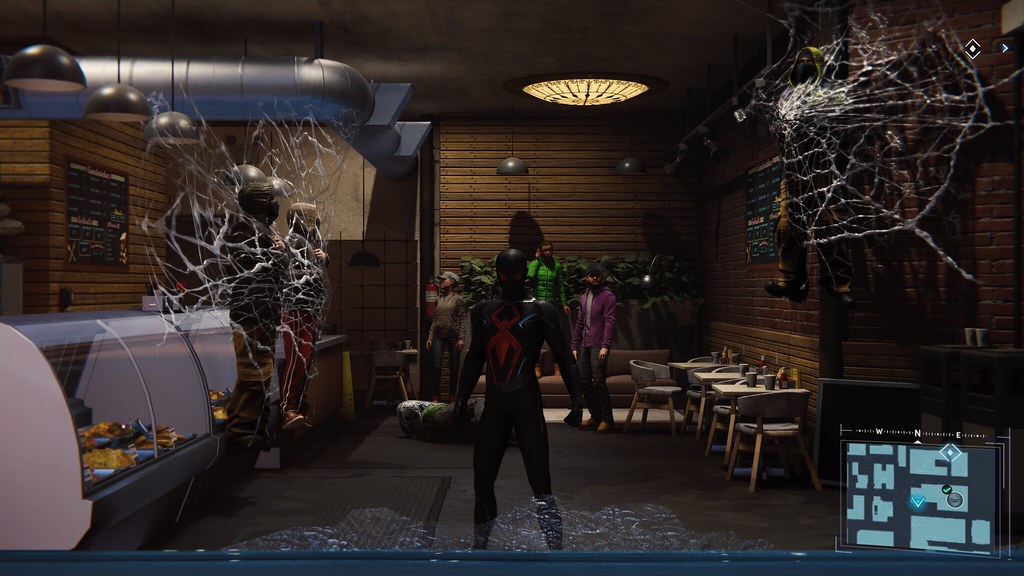 Typical day in the neighbourhood.

The length of story itself can be done in around 10-12 hours. Another 30h if you want finish 100% of the game. Comparing to some titles out there it is very short. It is not a bad thing, if you are more into the game you can try DLC’s. I think I will check them out for sure.

I’m glad that this super hero games are getting this kind of attention and that this title raised the bar in some aspects. Maybe in future there will be more super heroes we will control. And after all, games are supposed to be fun, which Spider-Man definitely is.

"If you like Spider-Man world and settings, non-stop action and using your web not just for surfing but to hang in cities like New York, well, there is your candidate."