"The S-urge – super urge to erase your memory after playing this wonderful experience called the improvement of the first game. It fails to impress and I wonder if it even makes sense to play anything else from D(i)eck13." 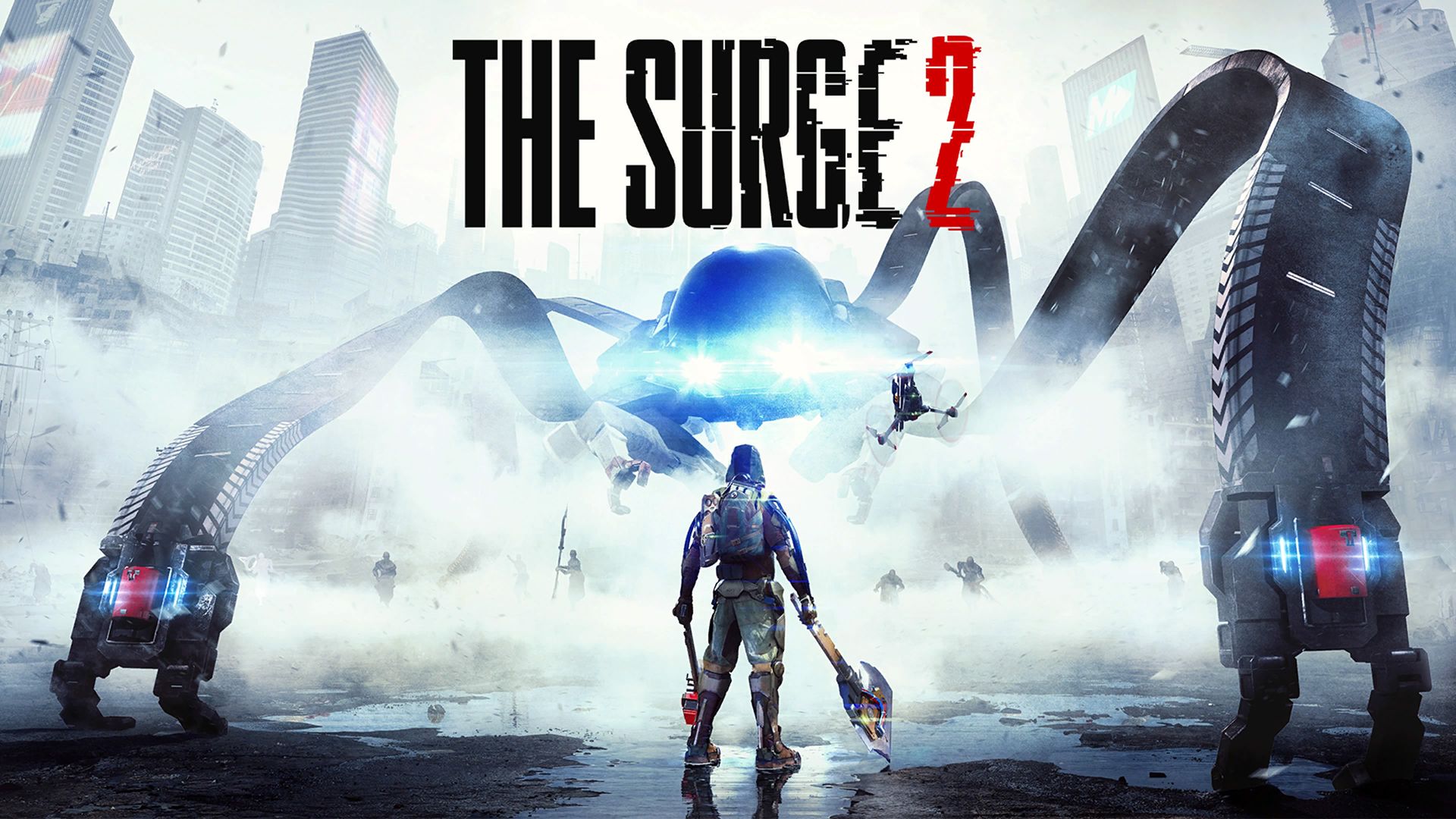 I want to make this as quick and painless as possible. The Surge 2 is a new action RPG developed by Deck13. These guys made the first Surge and Lords of the Fallen – both games that are mediocre at best. I was naïve enough to listen to reviewers talk about this sequel as something improved and decent. Generally, playing souls-like games is what I love, so combined with a couple of good words made me think optimistically about an upcoming experience with this bad boy. Hehe, let’s start. 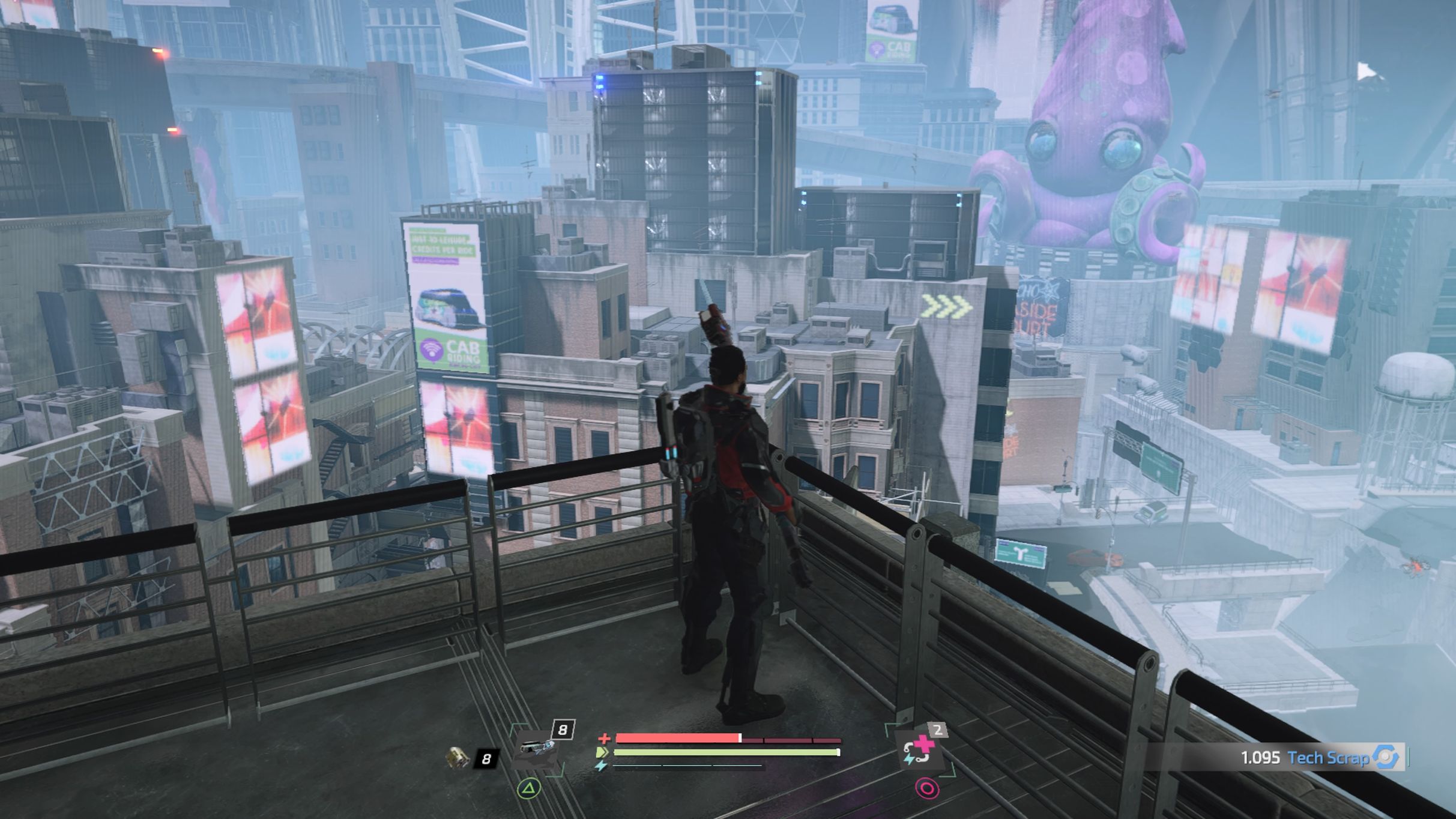 Welcome to the worlds ugliest town.

The Surge 2 is set in a dystopian future where humans have exhausted the world's resources, leading to, well, extinction. CREO, one of the largest tech conglomerates, makes attempts at restoring the environment but with the task taking too long, a second process is developed, Project UTOPIA, as a means to use nanites to complete the project faster but costing the lives of 95% of humanity. The nanites behind the project gain sentience, becoming a Rogue Process and faced with the CREO board voting against their use, trigger a system-wide crash, killing or corrupting every machine and human connected to the CREO network. Project UTOPIA is then launched by an automated system, carrying the Rogue Process nanites. Yes, I mostly copied the plot, the plot sucks balls and I did not enjoy the story at all.

Fight to cut, cut to enjoy, enjoy to…Well, not in this game

Let’s start the review with what is good and what really holds up here. I just want to spread my hate from top to bottom, so first I need to go through what I actually enjoyed. That would be all the fighting elements.

Boy oh boy, the fights are awesome. I really mean it. You will start almost naked after the plane crash. What I like is that you start with the dual hand weapon. I like them in general. As you make your way out of the prison, you will punch and block some droids and prisoners. Do not hesitate to cut the limbs from the first humans that have them. You will do that a lot. 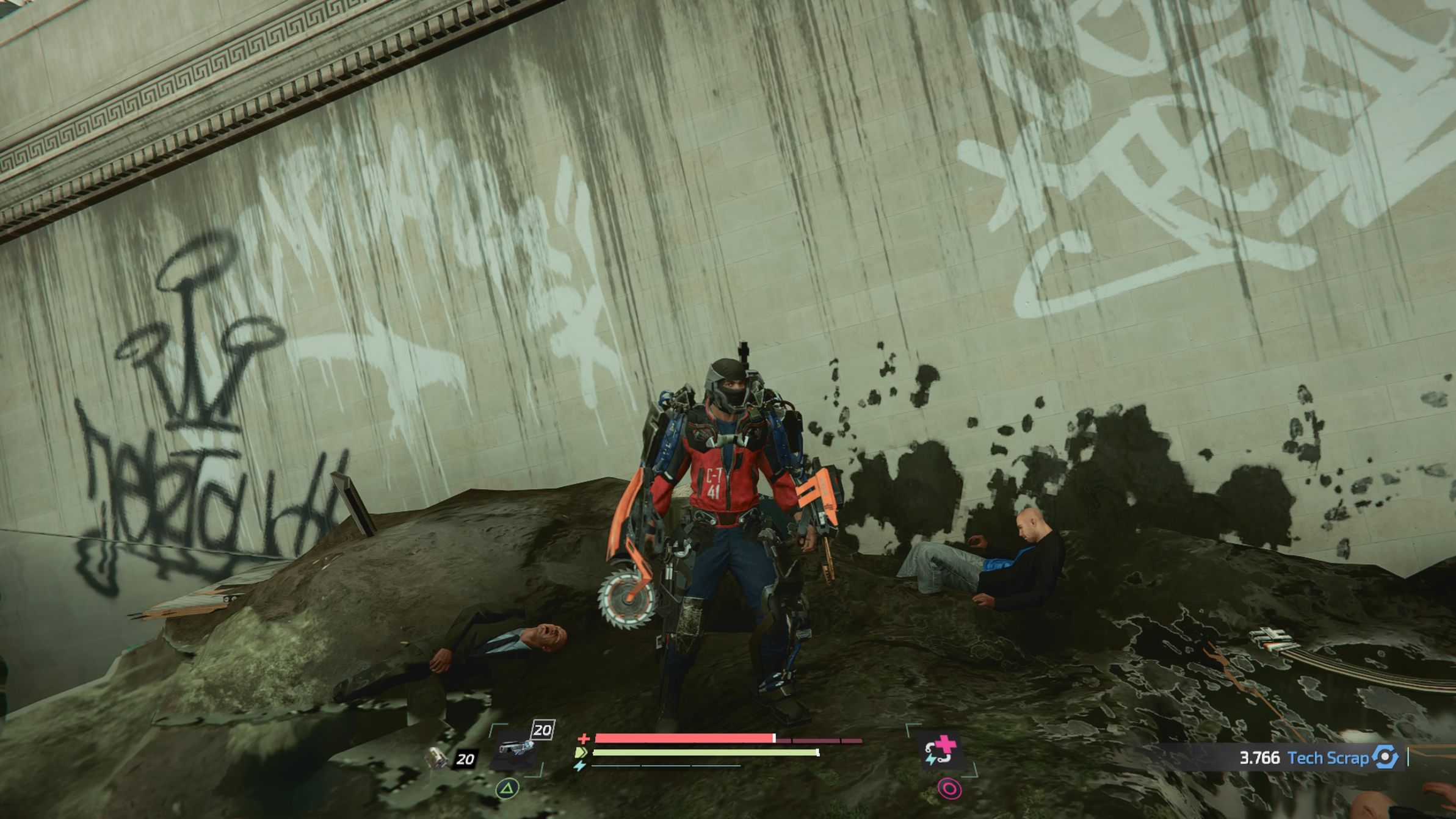 A good WTF moment. I guess they killed themselves when they became aware in which game they were in.

The battle system is a lot like in the first game. Its a regular dodge-block-attack pattern with few cool things. For example, you can aim at different parts (head, body, both arms and legs) to attack. By doing so, you open an opportunity to sever those parts, if you gain enough hits to raise your energy bar. The next thing are the flying limbs and awesome killing animations. That will follow you through the whole journey and it never felt dull nor underwhelming. The impact effects, fluidity, speed…Everything holds up so well, especially when you become decent and just kick their asses while severed limbs are flying all over the place.

We’ve all more or less seen that, but what is fresh here is that you can block-counter the enemy attacks. Having the right implant can show you the direction of an attack and by holding defence and tilting R3 (right analog) in the opposite direction of that attack, you counter and you can go crazy for a couple of seconds. It feels great. It’s also not innovative, but the combination of all the elements makes for the great experience. Fight-wise.

You even have a droid and a decent number of attachments you can equip to attack. It can greatly help when you are low on health and you just want to finish the enemy off from a distance. Many attachments are missable, so make sure to read where and when you can get one of those. The drone is not upgradable.

But I don’t want to sever other people

Yeah you do. Especially here where by doing that you unlock schematics for the new armor sets. Cut the head off on some new enemy wearing the new armor set – you unlock the head gear schematics. Do the same for the other parts to unlock the whole set. Now you can develop that set on the checkpoints/upgrade points called Medbays. You are the proud owner of an exoskeleton. 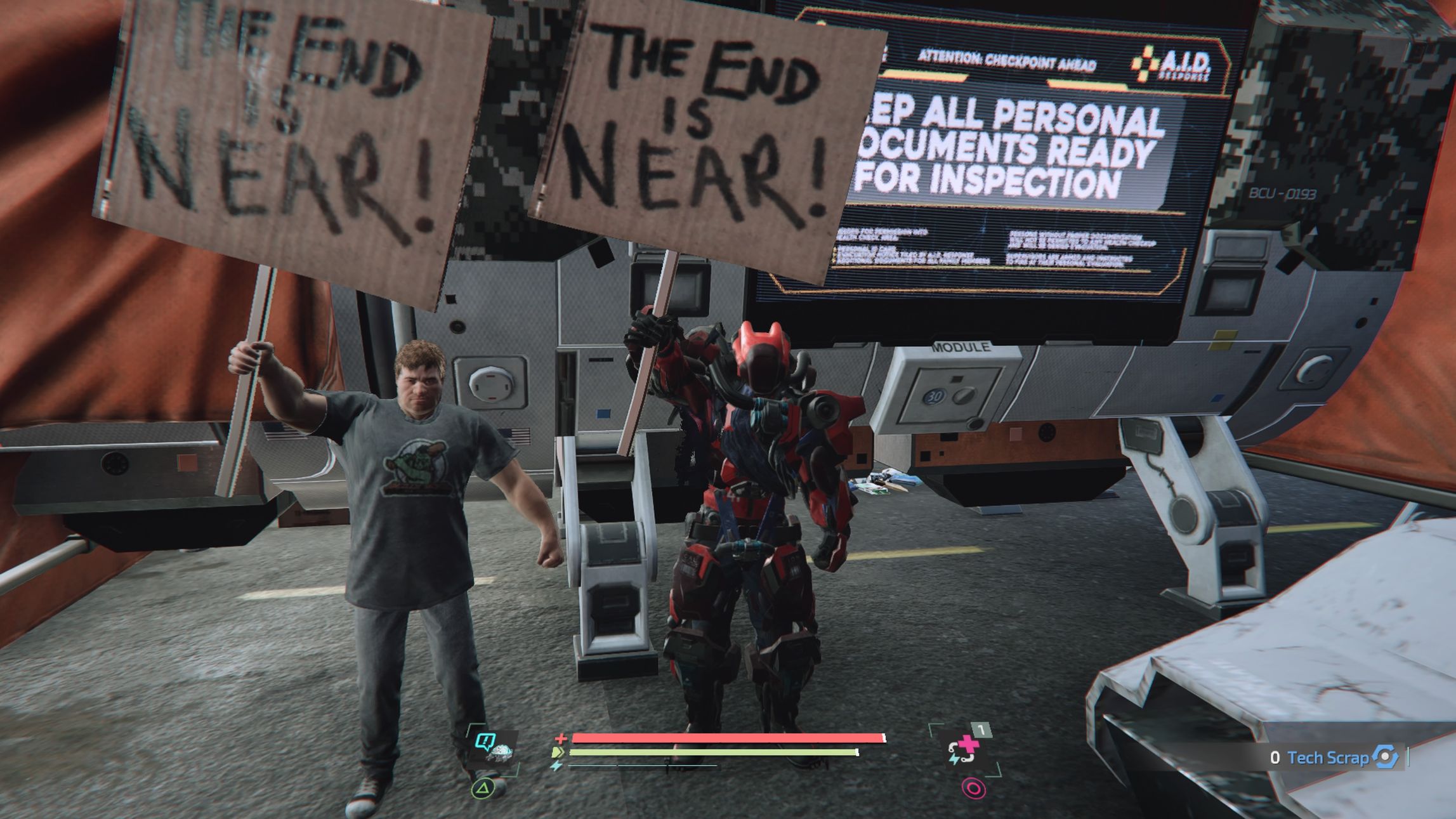 Throughout the game there are around 30 different sets and more than 50 different weapons. That is also a good thing in this game. Equipping a set mean more bonuses, but you need to decide whether you want a tank build or a lightweight one, where you are fast as a kite.

Weapons are cool as shit, I loved all the dual hand ones. Combined with elemental attributes, they are a great addition to the fights you will surely love.

For me, that’s it. Those are the only positive things in here.

You start the game by creating your character. One of the worst creation possibilities in a game. I couldn’t even choose long hair because there is none. When you are done, you will start the story and probably wander off like I did. Maybe these futuristic thingies are just not my thingy.

The world is going to shit and everything will try to kill you. What else is new eh? First thing you will notice is that the graphics are better compared to the first game. Even the settings feels better. Or do they? Finishing the first prison area will prove that 9GB of the game is just somewhat better compared to 4 from the first game. Whole bloody game is ugly. I hate the environments. The destroyed buildings, containers, so many ugly assets. There is only one area in the game that feels more natural. 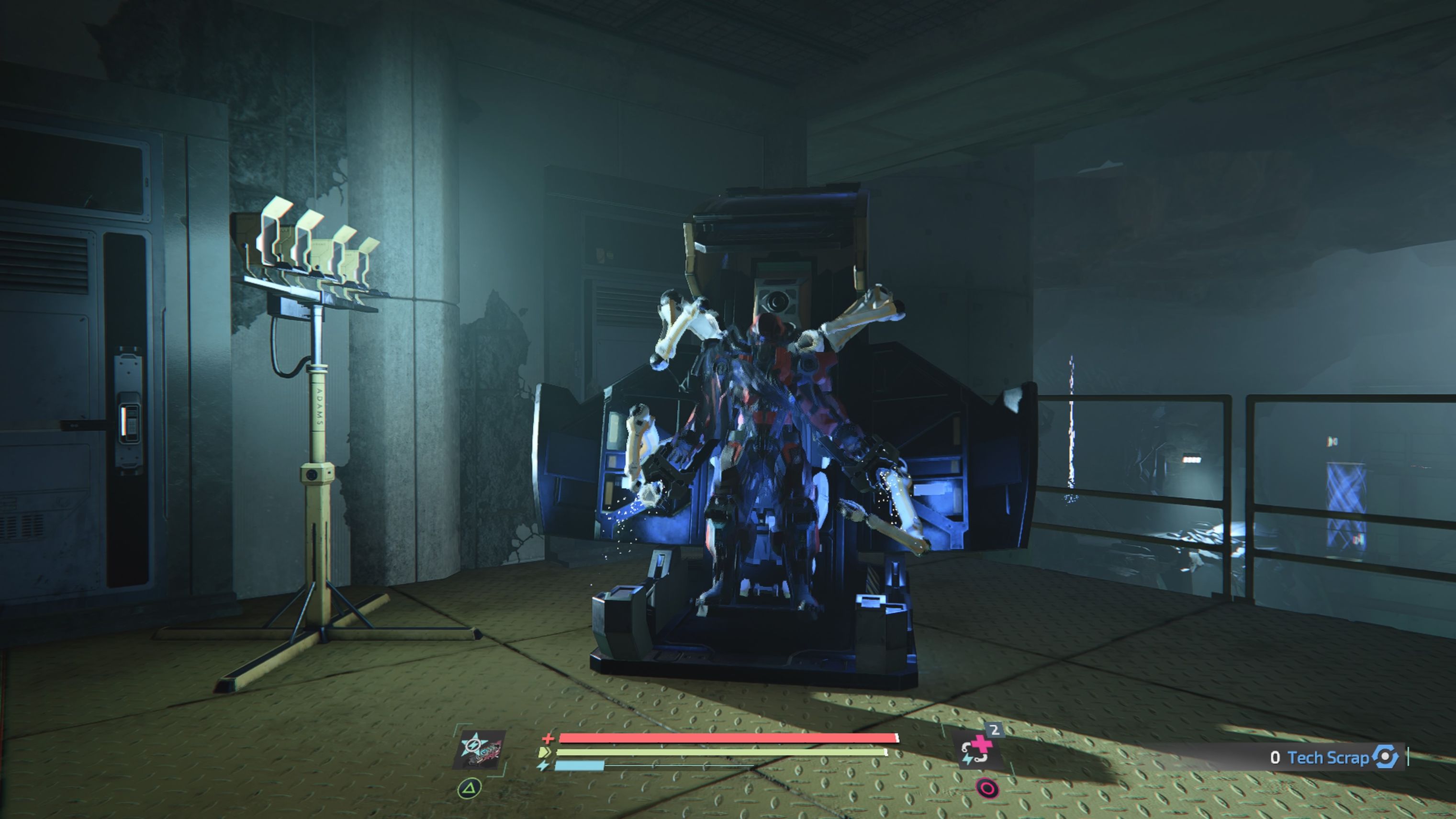 Implant the new stuff into your bones. Lovely.

The worst part is that when you finish the first part of the game, the second part is backtracking. Then the third one is yet again – backtracking. Then you want to finish the game? Backtracking. Yes, you do find new gadgets to reach different paths. Yes, some environments do change a bit, but not much and they still fugly.
I thought Surge was boring and ugly, but this is the same package if you ask me.

RPG elements and how not to die

Craft and upgrade. Severing body parts grants upgrade items. Use them to upgrade tiers of your armor parts/weapons. Each enemy you face is at a certain level (1-10 on your first play). If you collect high level parts, you can transform them to lower level ones and with that upgrade your gear.

You will also collect special implants that can raise your defence, increase tolerance towards certain statuses and so on. Increasing your levels will open up more slots for implants. But, you cannot equip as much as you would like to. You need to be careful about the points you have. All equipment you use will drain your core points so you can’t just equip what is the best. Level up and you will mostly likely be able to . 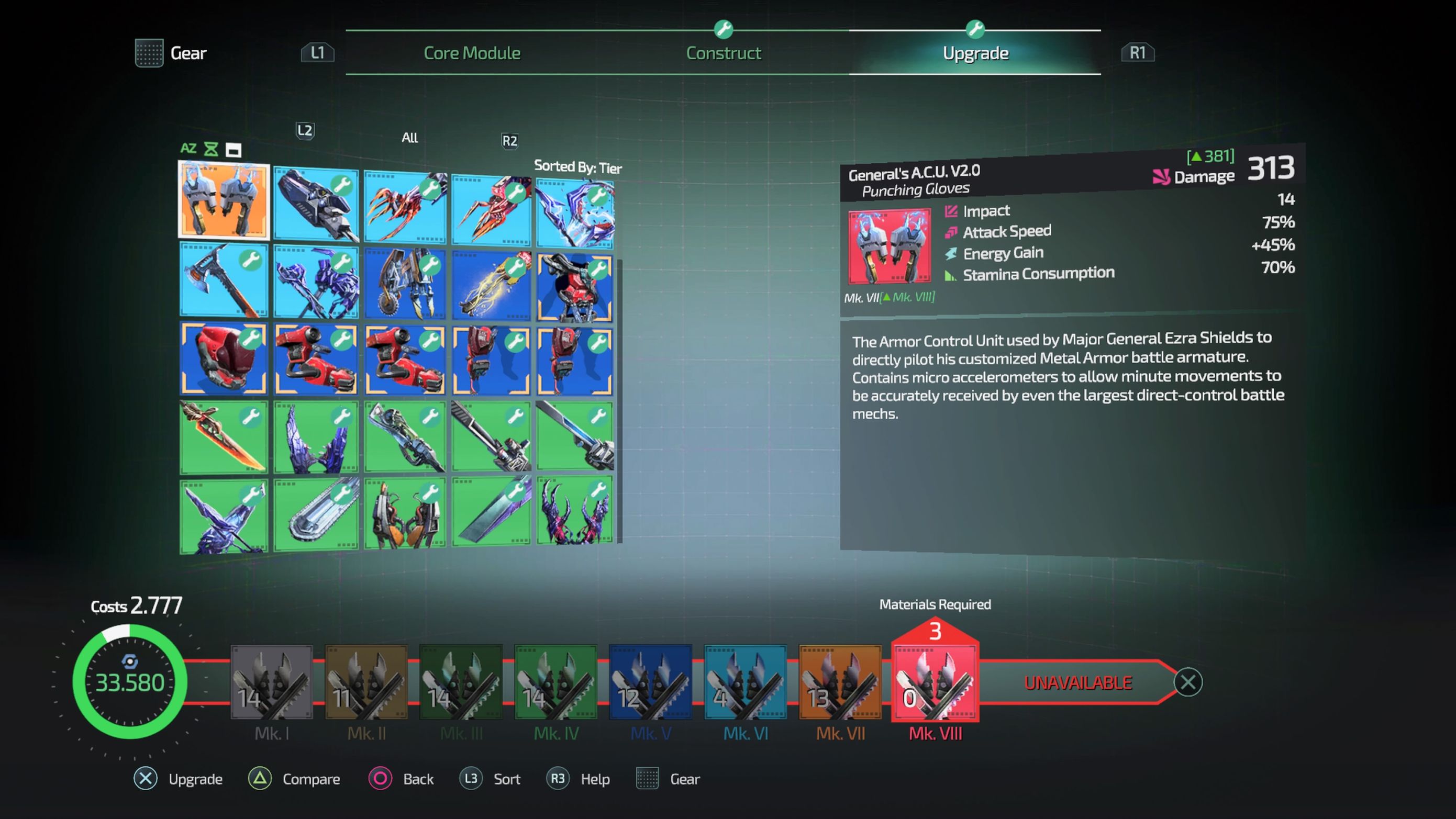 I miss the more in-depth RPG systems. Not like this this one.

Probably the best implant is the one for recovering your health. You can use it to recover when you gain enough energy (a bar which fills when you hit enemies). This is great. If you act aggressively, it pays off. By leveling this you can store additional heals and collect the whole energy bar again. It helps a lot with bosses.

The rest is simple – spend your experience points to level up. Use points you gain to increase health, stamina or energy. Mostly everything is pretty basic, no customizations of any kind. The great thing is that the special weapons (boss weapons for example) have their own range of attacks, so it feels fresh when you change your weapon.

I got bored even while writing this review

Wow, I did not even spread that much hate now that I think about it. This game is every game of this genre you’ve already played. It has great combat, stupid story, worst environments and not great side content. Even though quests can be fun (like the one when you help some actor to kill some dudes and you get the mouse gear set), the characters are lifeless and nothing feels important. You will not care about anyone.

Collecting audio logs is also not important nor interesting. The most fun and probably the only fun will be collecting the gear sets, weapons and fighting. That got me through the game and that is a step up. But then again, all the repulsive other stuff just gets in the way and diminishes all of those positive things. 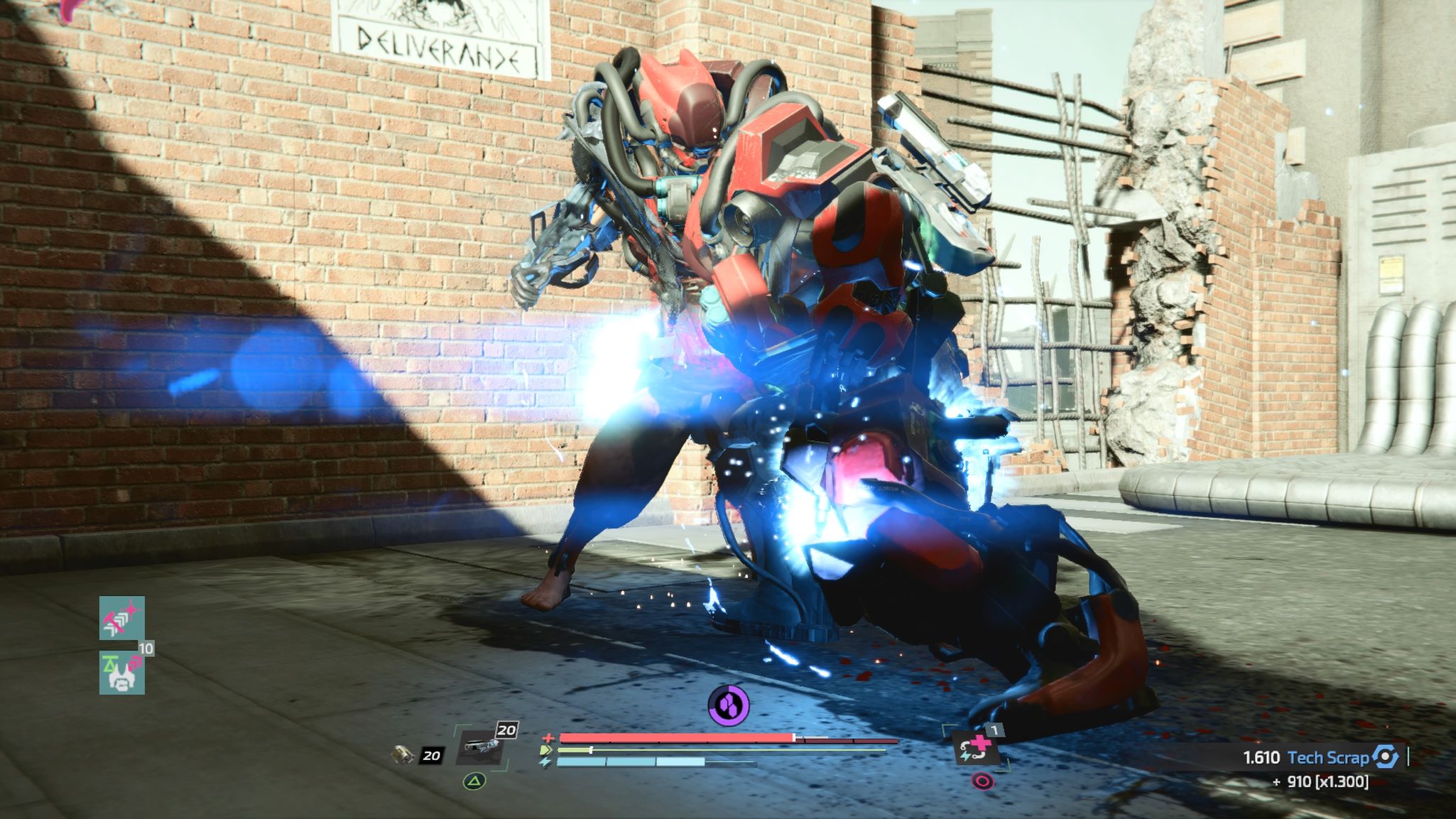 Not sure what is exaclty happening in here, but I know that someone will lose a limb.

The boss battles can be cool, even tough. The replay value – almost none, because who will want to go through this ugly bitch one more time? If you want all the gear sets, you need to play the game 4 times. But I don’t think there is a player in the world that has done so. If there is, please stop and play something from From Software.

Not to buy or never to buy?

Just hold your horses. I bet this will be another PS Plus free game. It is a level up compared to The Surge, but…Just no. It’s still bad and not worth your time. Play it only if you are crazy about this type of game. 25-30 hours can be spent on something far better (even Code Vein is better).

This piece of a mouse crap made me play the new game plus - many quest can be completed in a "wrong" way.

I almost forgot. The worst part of the game is its technical performance. It supports HDR, looks even nice occasionally. But damn, graphics are “melting” and “snapping” every now and then. It pains me to play it and watch that. It’s not fluid, it has many technical performance issues and that is something they need to solve. Or close the company, that would be even better.