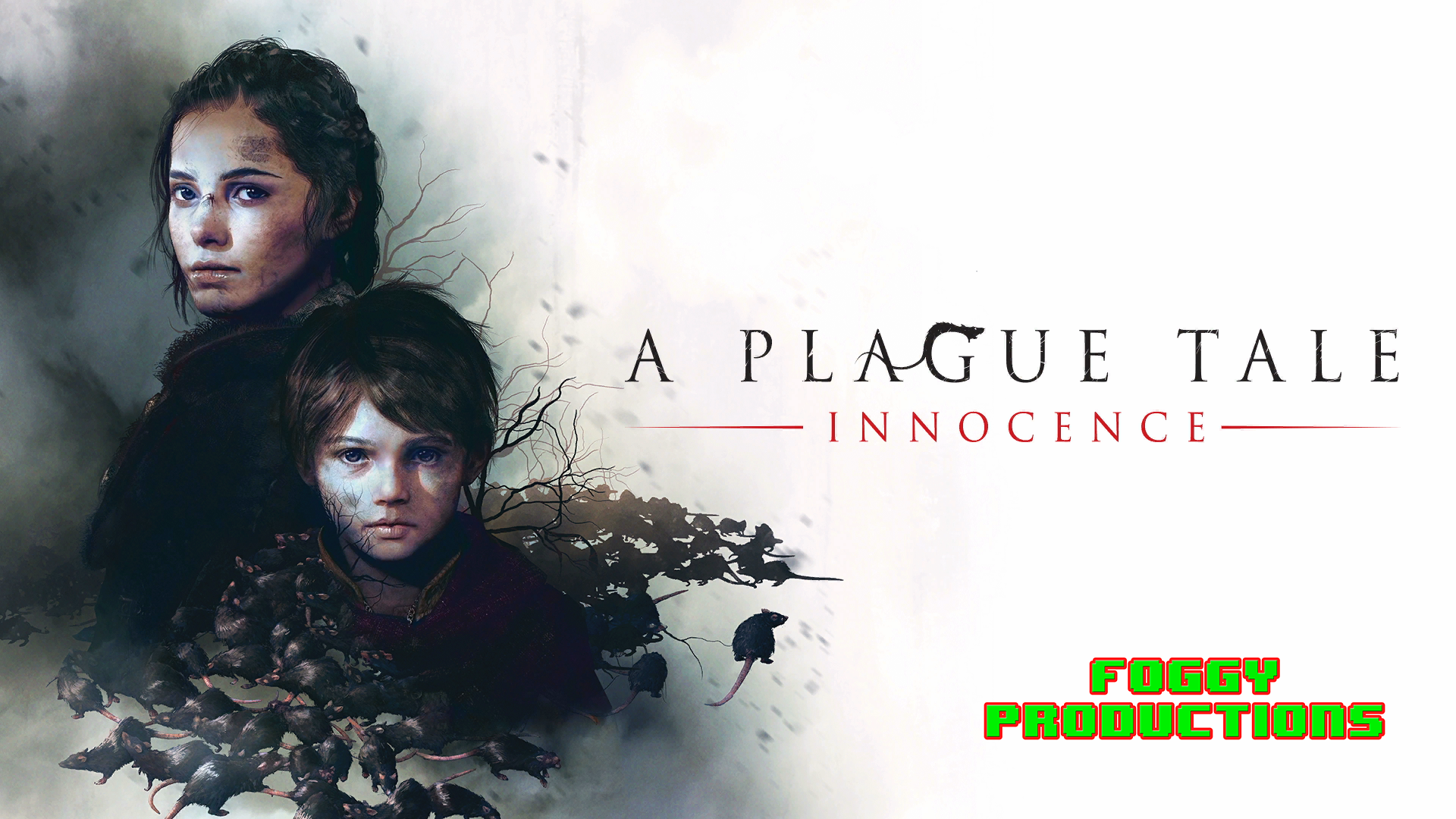 A Plague Tale: Innocence, an action-adventure stealth game developed by Asobo Studio and published by Focus Home Interactive. You can buy it for Microsoft Windows, PlayStation 4 and Xbox One from May 14th, 2019. Games like this makes me want to read what the studio did previously, and did I finish their other titles. I must say, nothing from them made me want to play those, but this one seemed different and because it was acclaimed so positively, I caved and gave a rat’s arse. 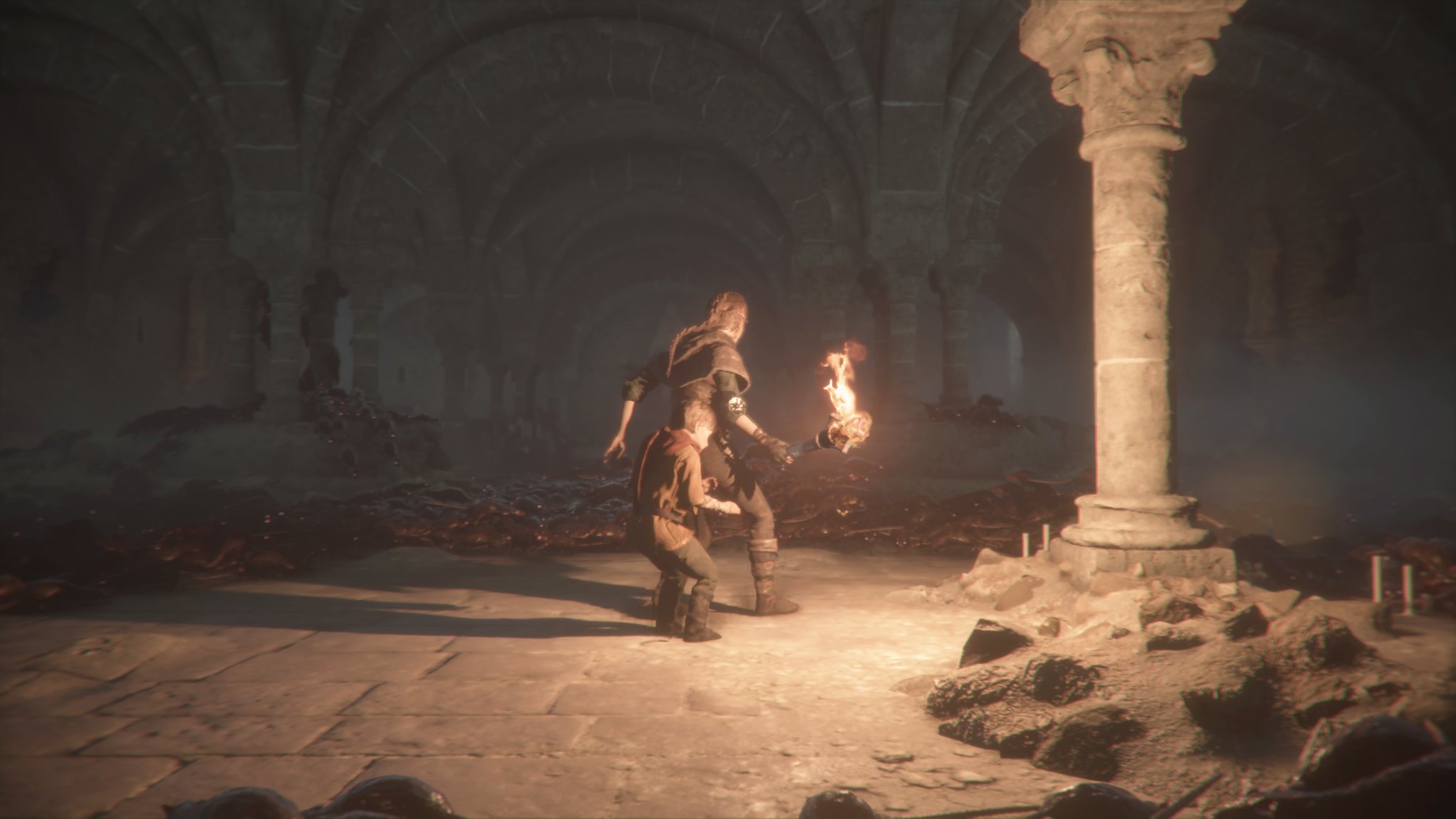 When there is light, there is a way. Them rats hate the light.

The best description of the game would be comparison between Hellblade; just instead of hell break lose you can enjoy dodging the plague and shooting people in the head with your slingshot. It’s a real struggle to survive in the world where rats plan to dance on your dead body. Amicia. What a lovely name. I wish my name is Amicia. Amicia Productions. Sounds cool. Not. Anyway, this lovely girl is your host. You will start in the woods and game will introduce its rodents very soon. Something will eat your dog as introduction to this entity which is the whole mystery of the game itself. Soon you will be back to your village, which is invaded by English army. Your brother, Hugo, is hot merchandise. Why, you will explore through the story. He is very sick, and your journey will take you away from the village to find a doctor. Story is good and interesting, so as usual, take your time and finish the game. It can also be stated that this tittle is some crossover of Last of Us and Brothers: A Tale of Two Sons where that family aspect tries to kick hard. 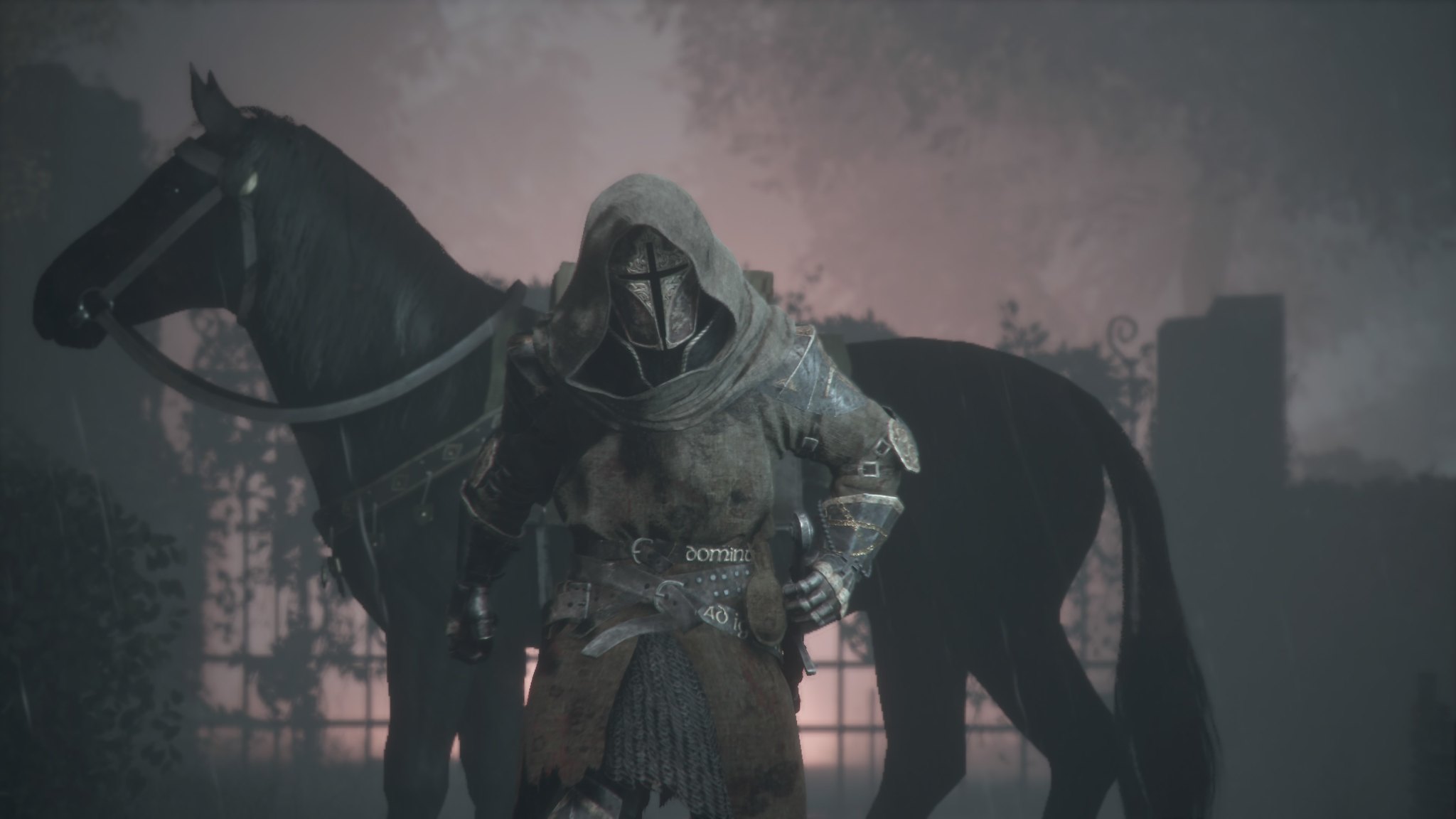 Big bad wolf. Inquisition is here and they do not like rejection.

If you are looking for a game with complex mechanics and deep progress system, this is not for you. This is a simple game with beautiful presentation, stealth oriented and imbued with simple puzzles. It is a very linear experience through different areas, mostly everything happens in the nature and I really love it; through green forests over snowy paths. Amicia as your host moves a bit slow. Even when you can run, still it fills like a drag. Often Hugo is besides you (your little brother), holding your hand. Its more or less dodge and not be killed while distracting soldiers on the way or swimming through hordes of rats that you can dodge by using fire or light. One wrong move and you are dead. Do not worry, there are regular checkpoints and auto-save feature. You will never have to repeat big chunk of level all over again. There are no difficulty settings, which is maybe a shame considering the game is really easy. But then again, purpose and presentation of the game is not its action pace or that, it’s the experience and feel it leaves behind. 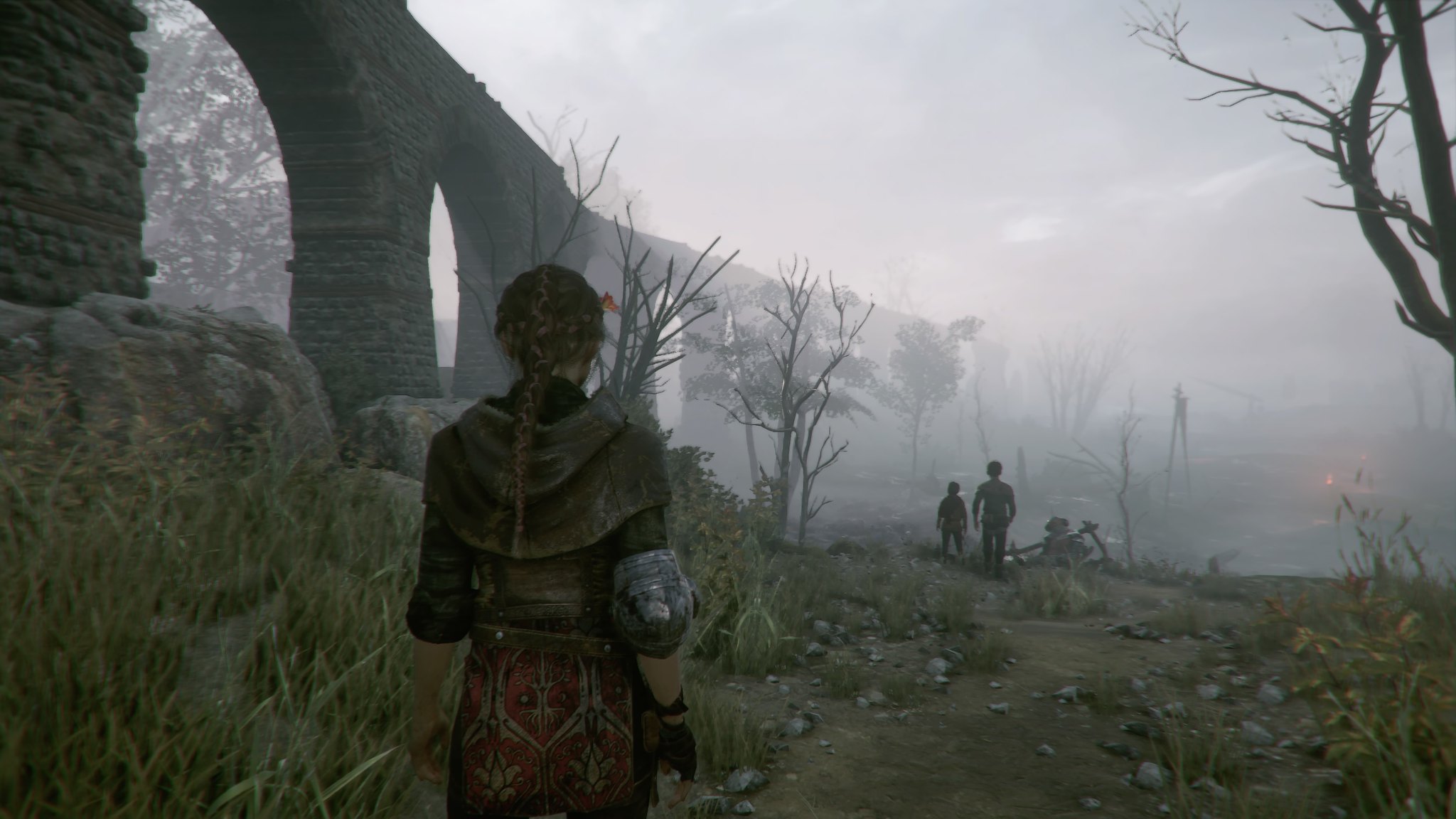 Its not only Hugo that will be your side companion. Through different levels you will meet different people that will help you on your journey. They are not particularly memorable nor interesting, but they will serve well when you are solving puzzles and avoiding death traps. Voice over suits the middle 1300’s well, but the lip sync is bad. Still, it’s a decent presentation and considering the size of the studio and the whole project. Heck, many AAA titles can learn from this one. 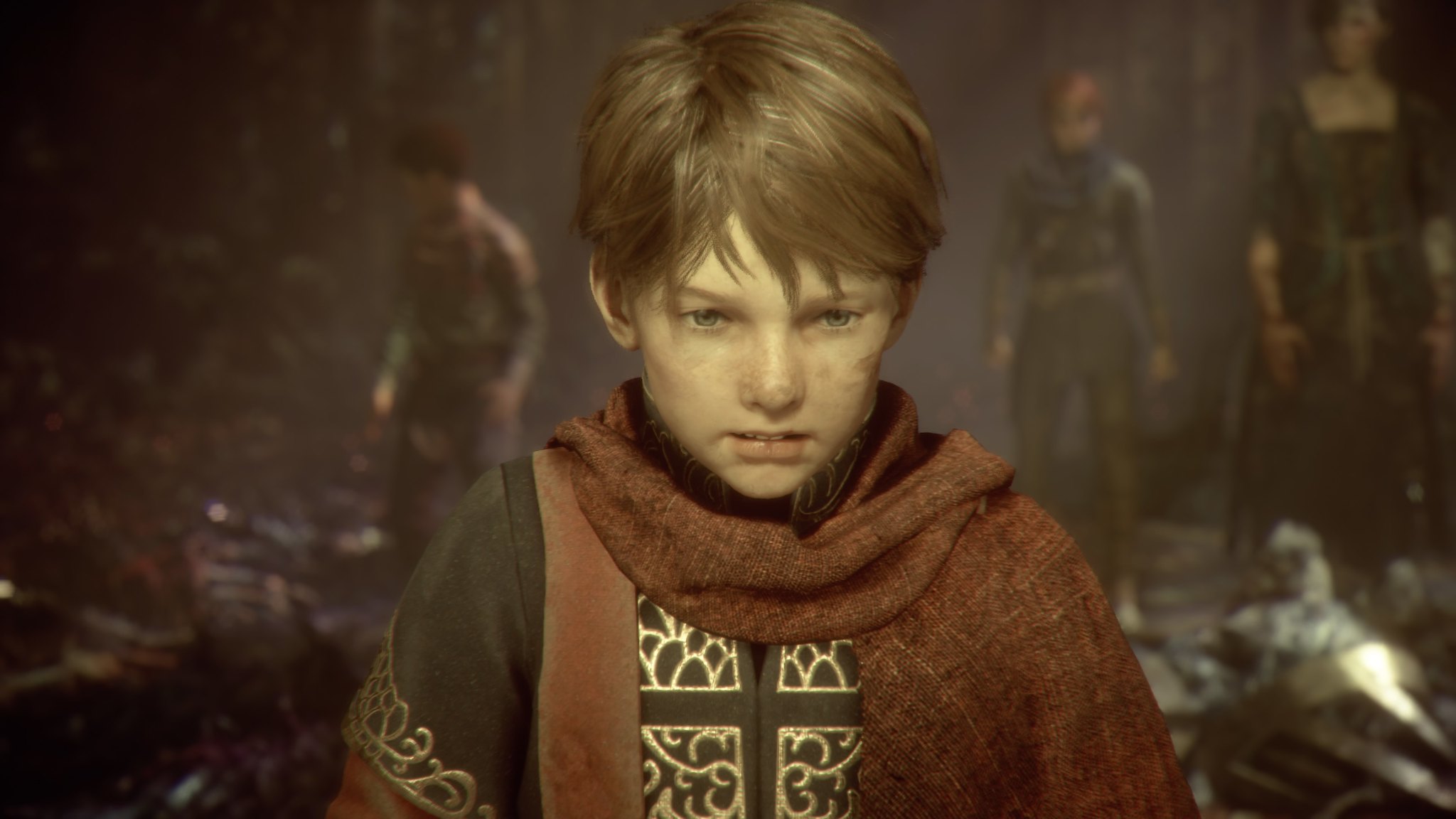 At some point Hugo becomes a badass 5 year old...badass.

Even though the game is stealth oriented, slingshot can be used in any moment. That is, if you can hit them in the head. Auto aim on. Shoot. Kill. Many soldiers can be killed using rocks and your slingshot. The feel is good I must admit, mechanics are not bad, but that is all. Its simple, you pick the rock, throw to kill. You will also learn certain new crafts and skills like throwing fire-based rocks or extinguish flames. Why would you do that? Because soldiers like to walk in the light, where rats will not bother them. Turn of the light or flame to prepare fine dine for them. Another handy skill is crafting rocks that can make soldiers take of their helmet for an easy slingshot kill. The only problem is when there are multiple enemies and of course killing one will trigger others to hear and attack you. It’s one shot kill, so consider your tactics carefully. 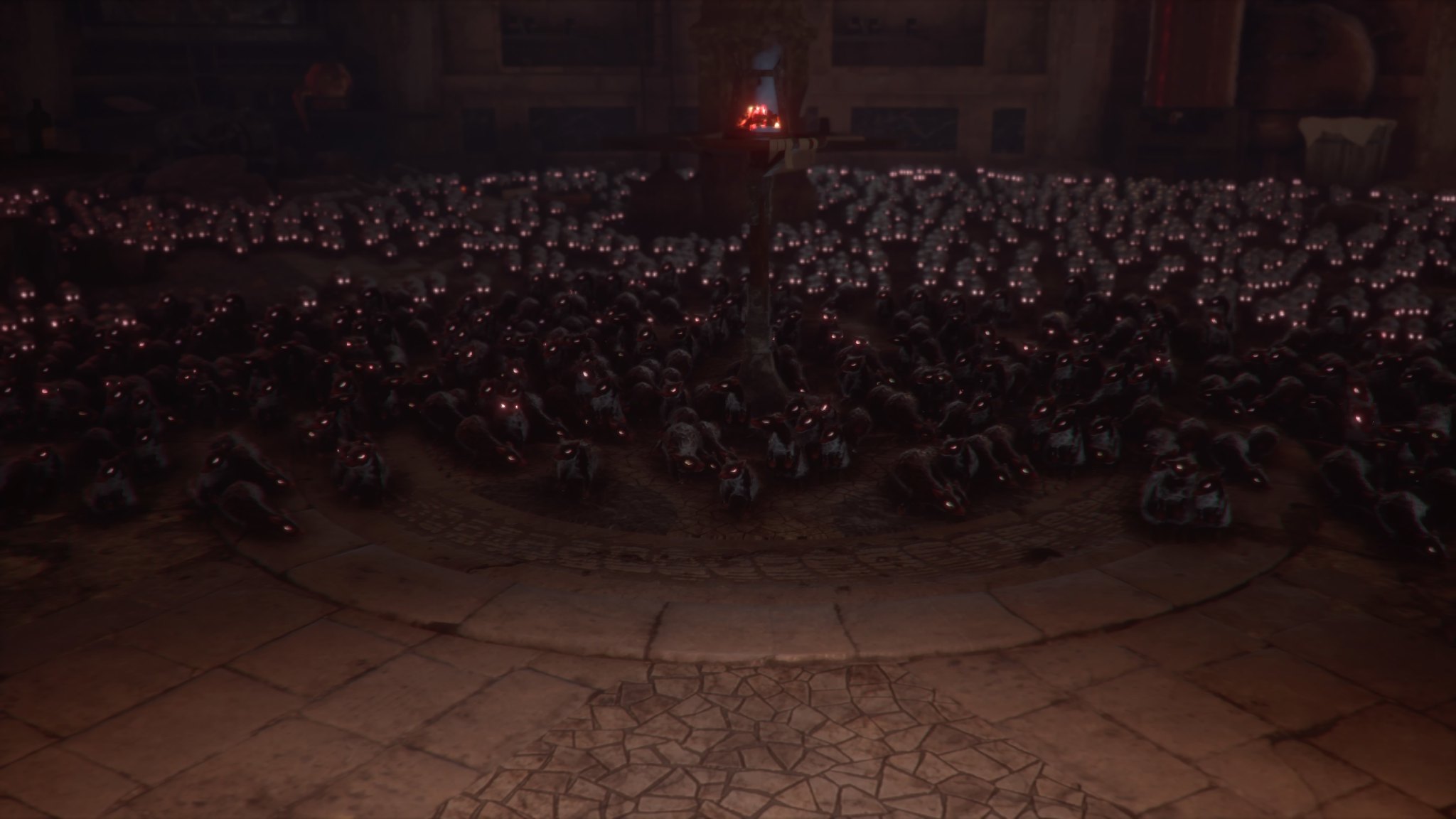 Isn't is lovely when this happens? Alone in the dark, not so alone.

Scattered in each level are crafting and upgrade materials. You will craft every now and then. Upgrading slingshot and equipment can be beneficial but not required. Still, it will be handy to carry more items. If you aim to collect all there is, each level holds collectables, some hidden some straightforward in your way. Nothing important, typical stuff. Missing some can mean you need to repeat chapter from beginning, since auto save happens often and blocks your way back. 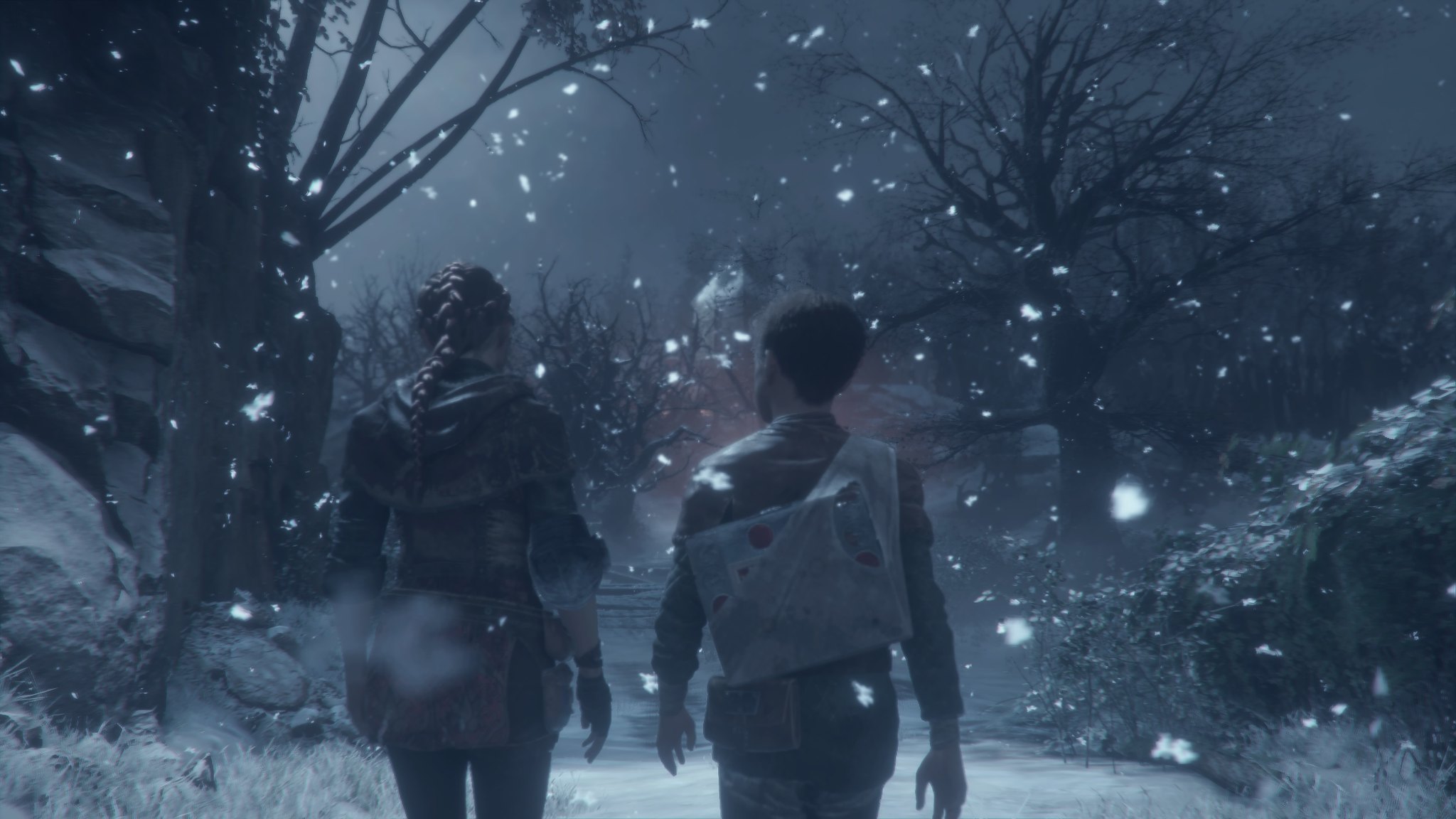 They bought me with snow. If only game has double jump, I would be bedazzled.

Whole game concept is extremely well written and presented. It’s so atmospheric and dark and yet in other parts breathtaking. It will indulge you for sure. Soundtrack is also very good and adds to the atmosphere in hard plague times and leftovers of war, creating melancholy all over the place. Physique of the rats is great, and movements are top notch, even when there are thousands on the screen right next to you. Beware if you have weak tolerance to filth and dead stuff; often there will be mountains of dead people and animals on your way. Only turn off point are clunky movements of characters in some scenes; also taking Hugo by the hand can sometimes turn out to be that Hugo holds your liver and not your hand. Small stuff. 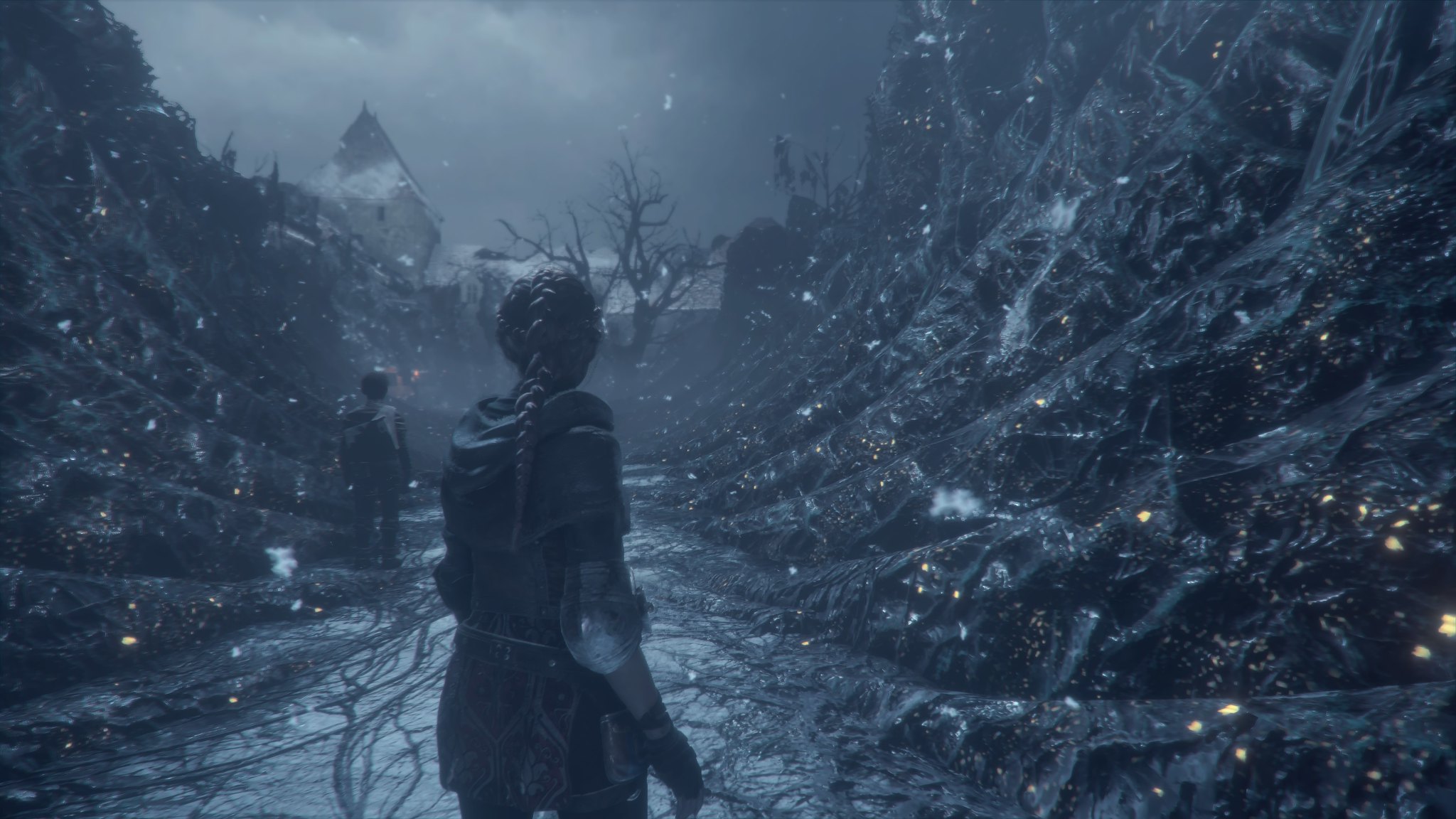 Plague growing, but it just keeps looking better and better. Oh the agony.

This is a true sleeper hit. It’s a 10-12h game which offers so little and yet so much. It is simple, basic even, but delivers that level of art and feel that will for sure let you off satisfied. Unfortunately for me personally, I don’t see any repeat value and I don’t see this as 90+ game. It is a must play for sure, it is known thou rats and burn them all, hidden gem, an ode to your inner artist, infested drama… And hopefully, its first out of many well written game candies that Asobo developed. Kudos mates, this was simply freaking cool.

"Proof once again that rats are cute and games are pure art."