"Retro dosage of science fiction based jRPG that will use music to hook you on and make you enjoy the experience. Never underestimate the power of 8bit. And give us more games like this please. " 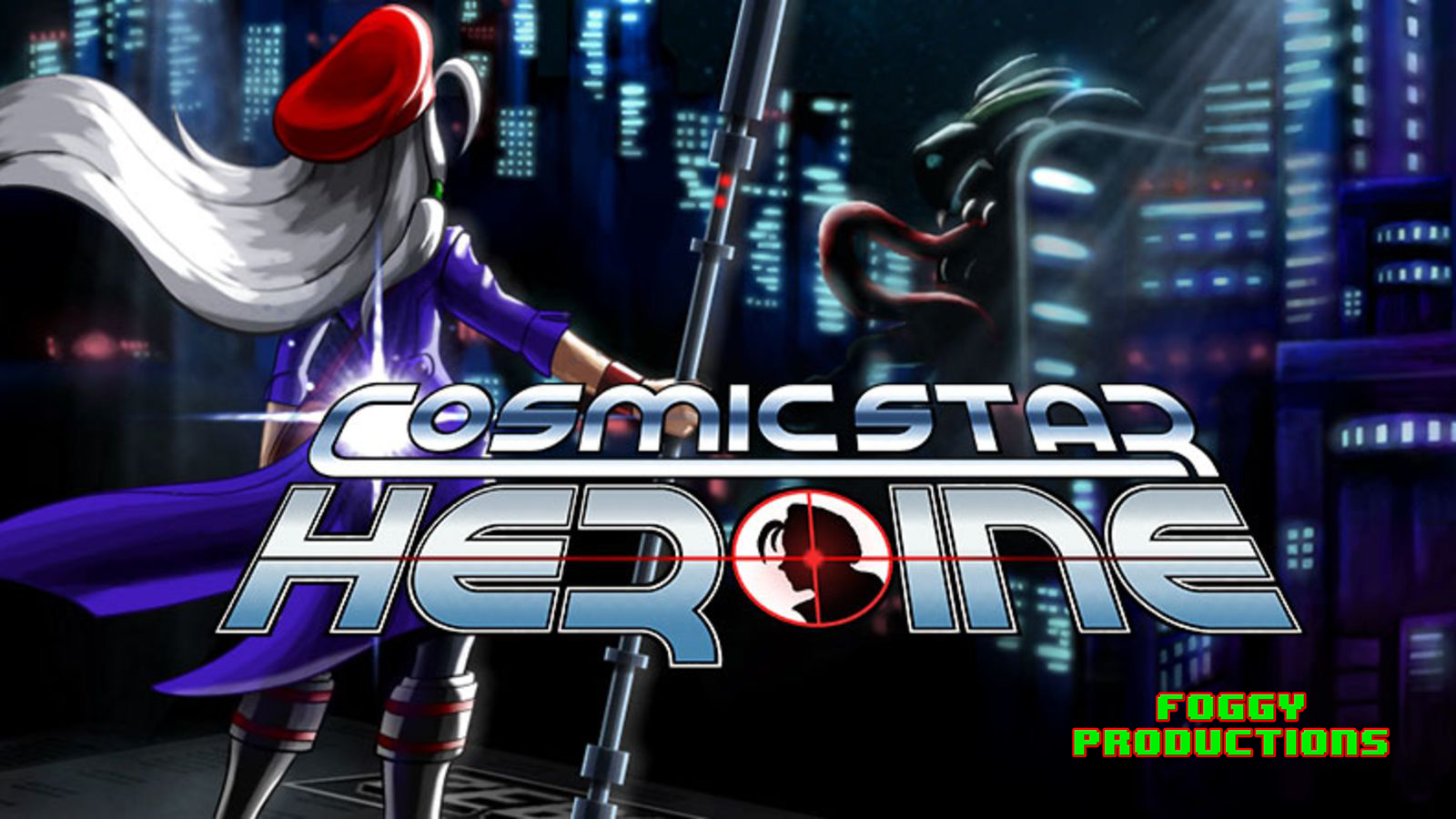 There is just something about retro jRPG’s, about those 8bit, 16bit or whatever bit presentation. It’s simple and its fun. This game is purely that – simple but fun. You will not experience the time of your life, but definitely it will feed the RPG beast inside you. 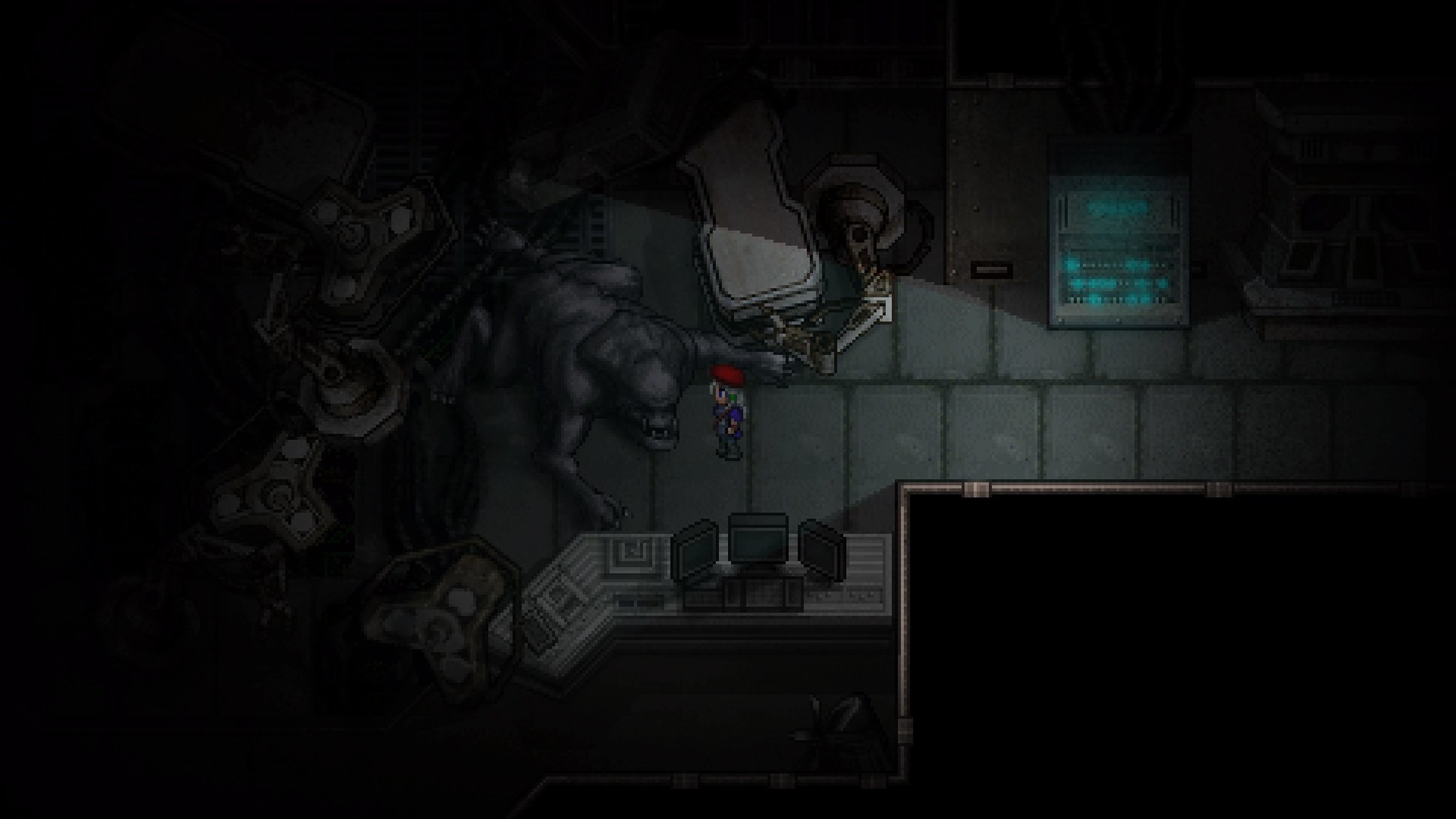 I know I’m a little late with reviewing this since its out from April 2017th for PS4 and recently even on Nintendo Switch. Never too late for a decent game. Or is the game even good?

Well, to start, you need to know what are you buying. This is retro themed jRPG taking its roots from games like Chrono Trigger and even Final Fantasy VII. Those are big names to just throw around, so how does the game feels like you might ask? I found game more closer to Chrono Trigger than anything else, except maybe the story. It’s a turn based game with a pinch of exploration and well known in game systems like equipment management, skills etc. 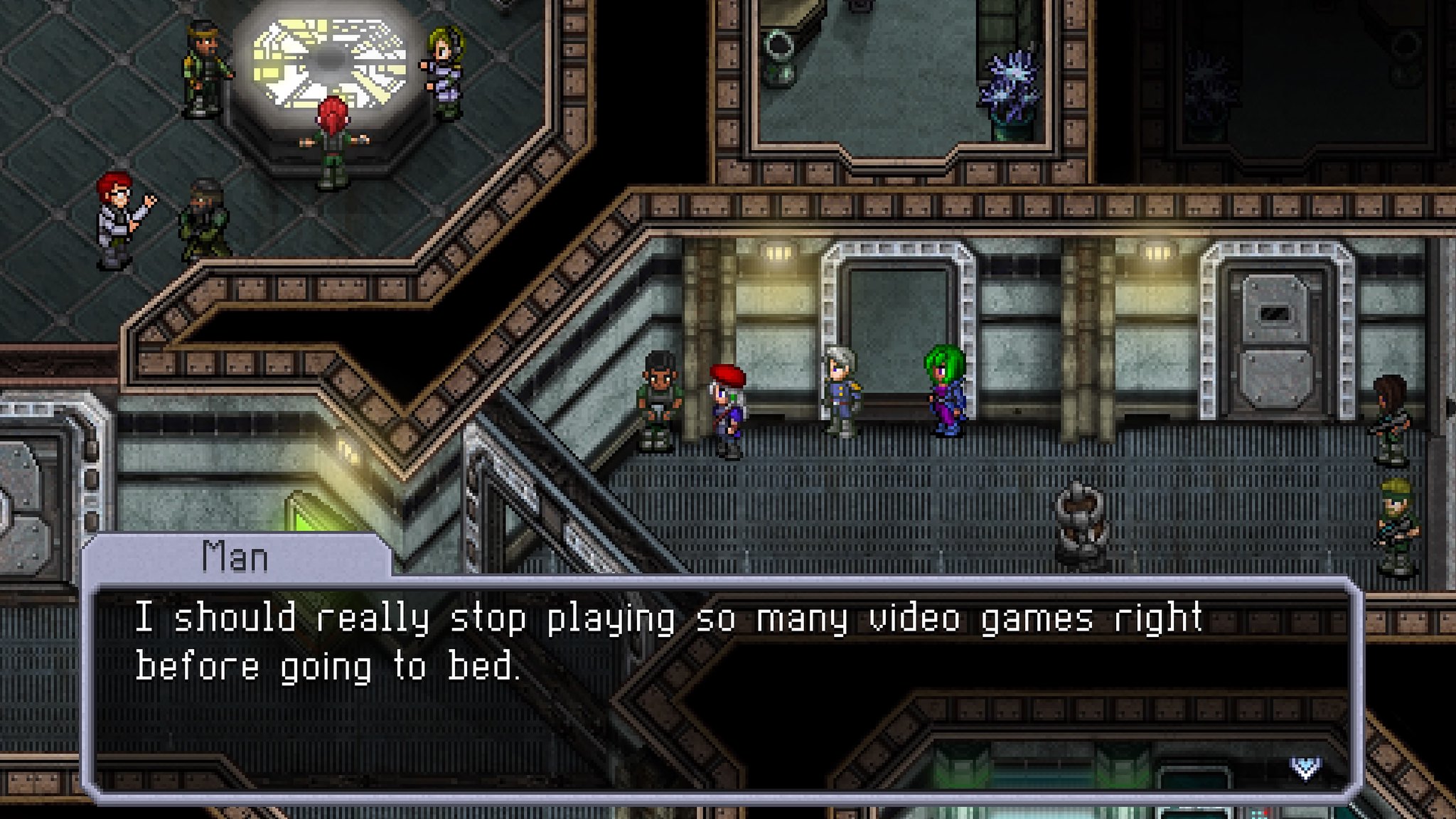 Yeah, but you know you will not stop.

Story in the game is not its best aspect. Although I find the story decent enough; it’s a struggle against AI and you as a special agent are placed in the middle of the science and digital intelligence trying to take over. There is one big twist later on, other than that nothing to mention. Animations are past century stuff, the whole port is ok but I just hate when I don’t watch some part of the game in full resolution. All animations are cut off and feels like you are playing PSP port. Still better than Castlevania SOTN where you are limited to 4:3 all the time.

Game struggles to give good background story to playable characters. By the end of the game you will for sure find cool ones and use them in battles, but now when I think about them only Heroine comes up with some information, even she is shallowly explained. Too bad, strong story and bond between you and your characters is very good point collector. 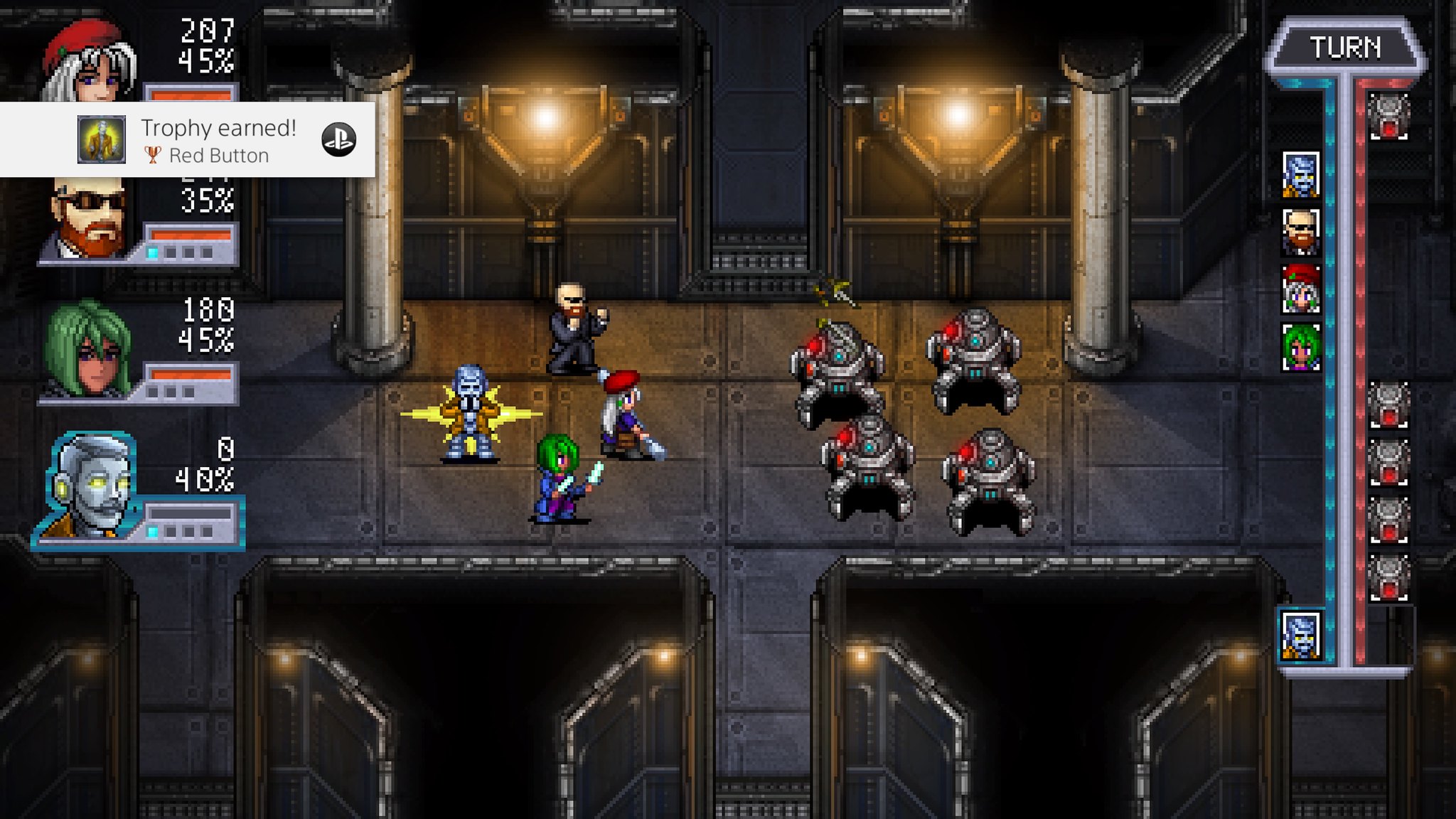 Meet the dancing robot. He is useless.

I love the world. You will move from green landscapes to rust and metal, it is a science-based game after all. What gives the best feel about all this is in game music. Wow, I don’t have words to describe the goods of the composition for this title. After playing the game I was listening to boss battle theme and few others on repeat. The other songs like for example when you are in dark laboratory are simply spot on and delivers the atmosphere perfectly. You will find yourself humming all the time.

World itself is very limited, couple of planets to explore, a mini world map and few towns and dungeons on each planet. You even have the ship to travel, although its only to change the planet and land there. Your whole crew will be on the ship when you reach certain point in story, which will also open some side quest content which is basic and worth the items, not so much the story. Its all very limited and basic, straightforward so to say. Not a bad thing as there is enough variety to make things interesting to explore. 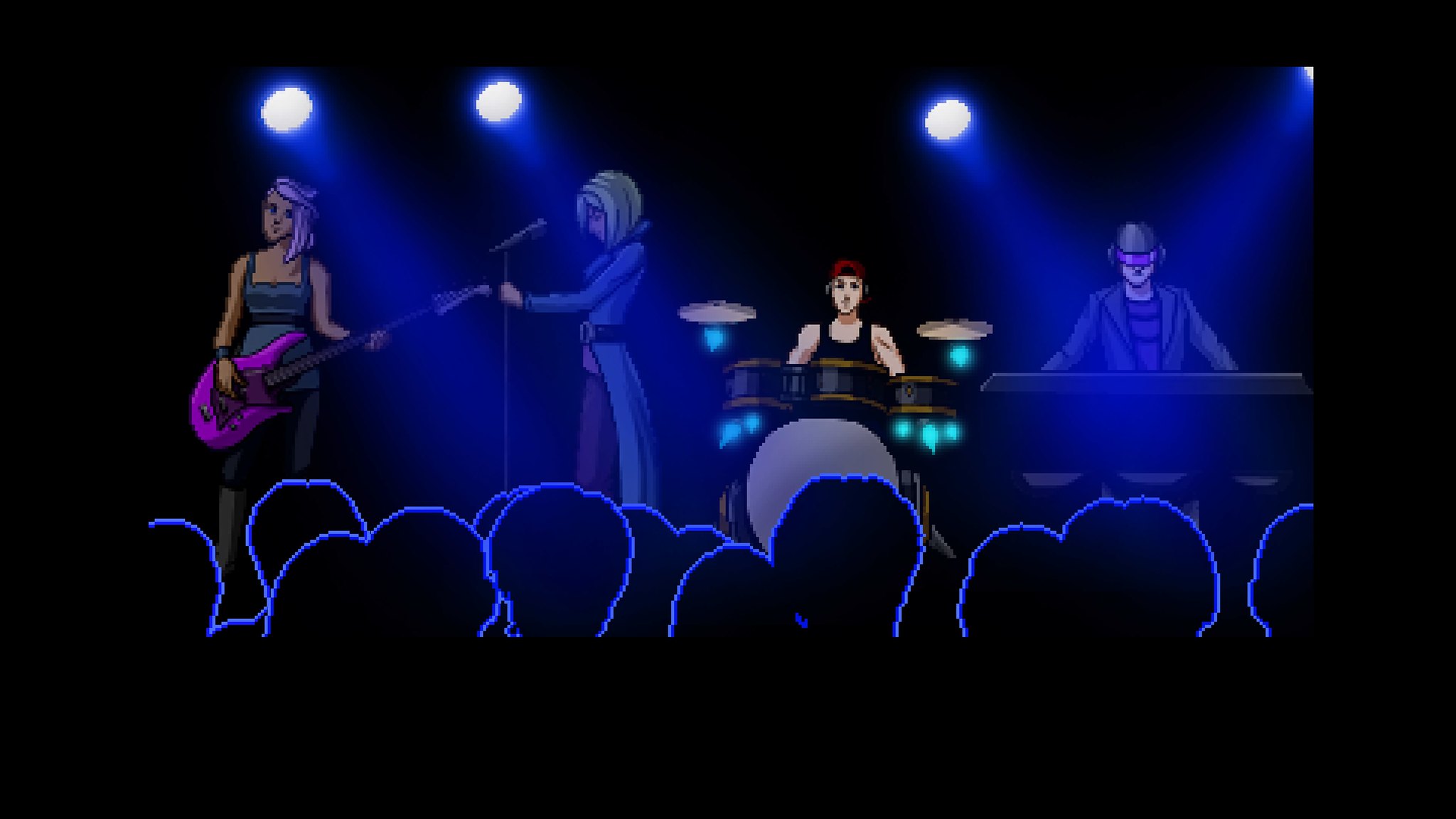 What is better than going on in game concert? Can't think of anything...

I think you will fall in love with the game when you enter first battle. Music will kick in and if you are turn based battles fan, think no more. Try playing the game on harder difficulties if you want real challenge. It will take more time but you will plan your every move to win. It goes like a typical turn based battle where you perform your actions when it’s your turn. Every character comes with unique skills and elemental attacks that you can use. You can’t spam those unless you rest one turn. With each turn your style points goes up and you are closer to burst mode; turn where your action will be much more efficient. Having more than 100 style points can save your life. Game offers minus HP which will leave you alive for additional turn where you can heal or perform some skill that works best from that condition. Have in mind that enemies get stronger with each turn. That makes battles medium to fast speed and there are no random encounters. When you beat an enemy, it is gone. Convenient enough, you can repeat last battle within your menu.

I guess this is fine and removes that frustration of often encounters, but puts you in position to grind only when there was enemy giving decent EXP. Money will never be a problem so don’t worry about grinding much. Few levels here and there if you have issues with beating a boss or so. 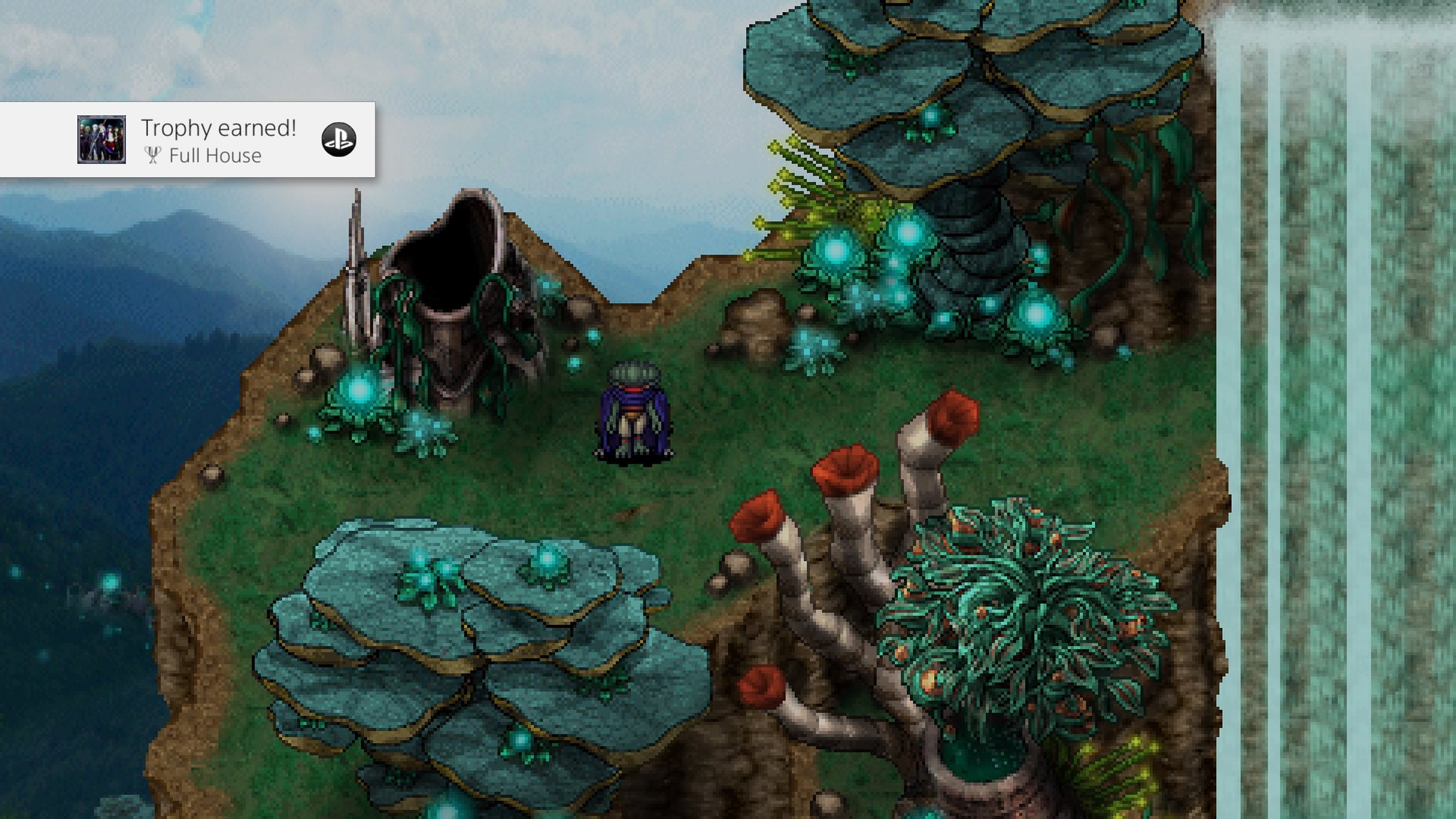 Prepare for battles by modifying your equipment such as weapons and accessories. There is additional armor slot which can grant some good special skills if your character stats are high enough. Every part of equipment has some purpose and you will change often as you go and collect. It’s really basic but fun having new stuff and attacks throughout the game so often. Items are like skills but you can use each you equip only once per battle. Effects are mediocre. Sound of the effects is bad. Some skills that hit all enemies will be louder than in game sound by double. It’s a little weird. 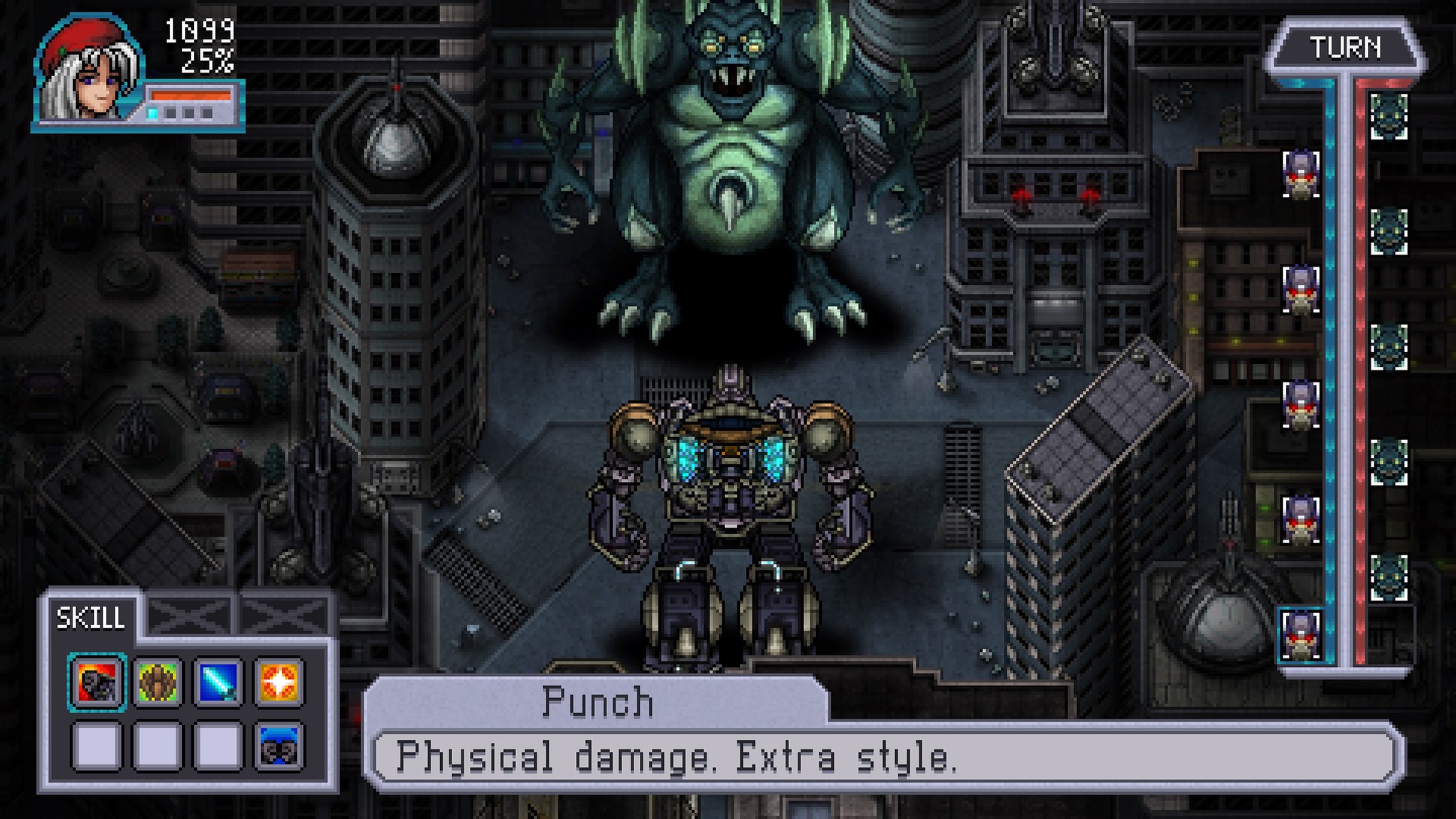 I love them wanzer battles. Too bad its the only one.

Overall, I’ve got my retro dosage and I am satisfied. The game is not long, 15-20 hours depending of difficulty and maybe less than 15 if you are rushing through. Few times game got stuck, I had to restart the console and try again, which was a bit bothering. Still, knowing all that and reading all above, you have a grasp what you are getting here. It’s not Chrono Trigger, its not grand, but its lovely, simple and music is kick ass. By the end you could be a bit bored with battles in general because it will end up being the same thing over and over again, but having many skills to try equipping for battles is still fun and enough for this adventure.

If you are trophy hunter, there is one more reason to finish the game fully. It’s an easy platinum and lovely game. Make more please. Adjust audio levels please. And give more to the story. Retro is not dead, it will never be. And jRPG’s, well, they will always have audience.

"When you wonder what to play next and you just want that gem in this genre, buy and play this."