"Restoring the Moon or restoring our faith in old school RPG's? Unfortunately half there for both. " 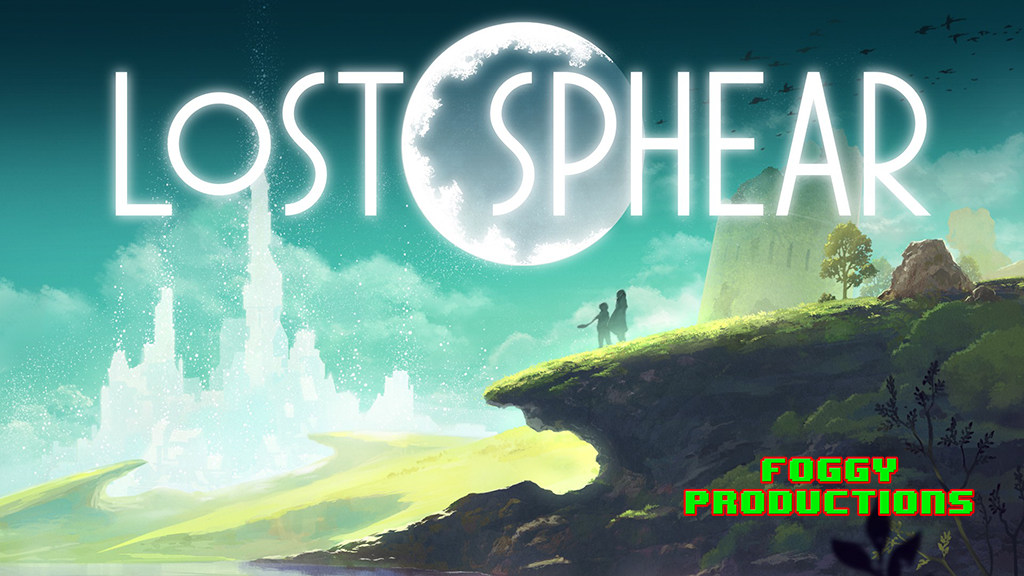 What do we have here? Oh, it’s a Tokyo RPG Factory game. Lost Sphear is considered a spiritual successor to their first title, I Am Setsuna, which in itself was created to emulate the style of 1990's JRPGs. It was released for Nintendo Switch, PlayStation 4, and Microsoft Windows in Japan in October 2017, and worldwide in January 2018.I think that they literally got that “Factory” part without thinking that games are more than copy paste of everything that was a success until now. 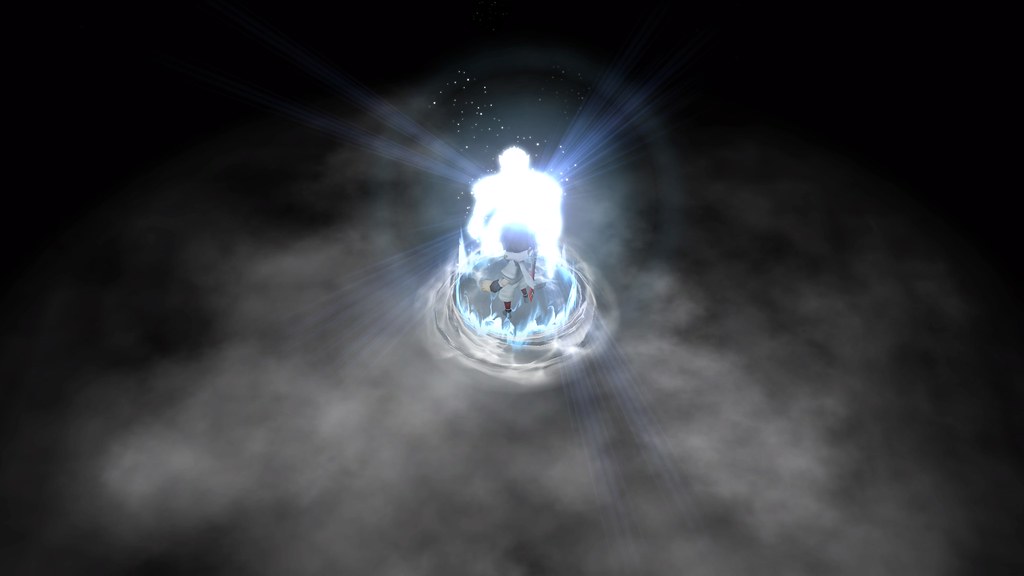 We are a warrior of light, restoring people and towns from memories. Sounds kind of cool.

Game starts slow and very dull. Of course that you need to go to forest and beat some monsters. It’s like they were ordered to put all this cliché situations in the game. Anyway, back you are and town is engulfed in a white mist, completely gone. Oh no, but what happened?! Kanata, main character in the game, turned out to have power of the moon which he can use to restore mist from memories of that place. It’s a cool idea, too bad that they followed safe approach, the result is just mediocre in its story-telling. Second part of the game, when you think you’ve finished it and credits roll out, that’s where I found the game was better. Not much, but that content was one level above. 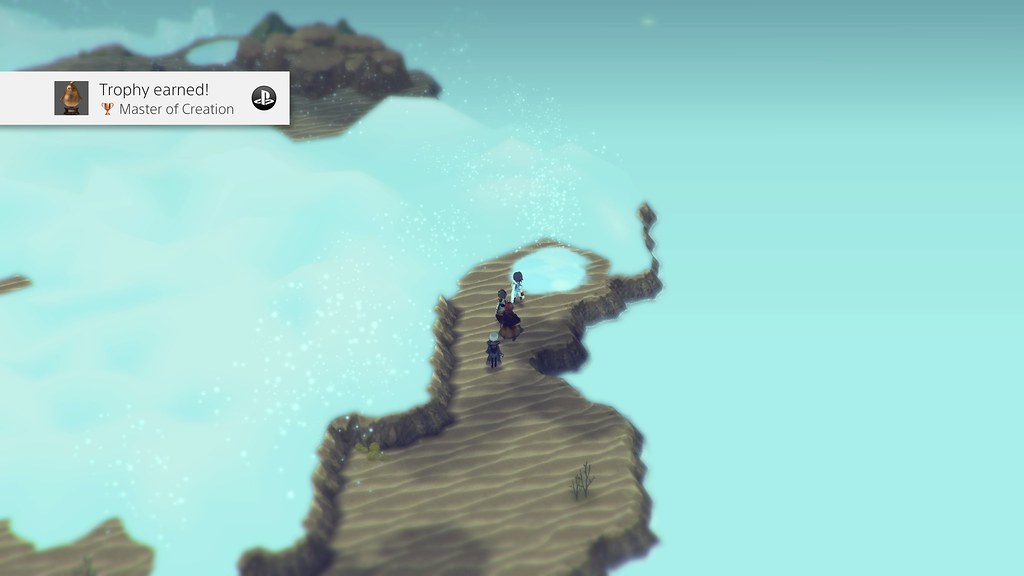 World map, looks nostalgic enough. Also, very bright, I couldn’t see half of the time when I was restoring the world.

Always wanted memorable characters, bond with them and care? Wrong game. Although they are not bad, your main 8 team members never feel like loving group of people. Kanata – swordfighter, is like said, main character and one with the biggest burden. The world is disappearing and you are only one who can save it. He always looks for the good in people, goodie boy. Lumina – fist fighter, Kanata’s childhood friend and lover. Just kidding, no love here. She will be important part for the story later on. Locke – Gun Expert, most irritating person in the whole world. He will get on your nerves with every sentence and every action. Later on he will suffer a cruel fate after which he becomes less irritable. Van – The Beam Boy, he just appears in the beginning and acts as a tough sarcastic guy who like to insult everyone. He was supposed to be the cool guy but somehow he lacks that deep characteristics to be so.

"Memorable Characters? Ok, here you go. But not in this game."

Shera – tomb raider, I mean, bow expert. She is a Twilighter, part of the group that lives inside the mountain and gets captured by Imperia. Kanata being a good trusting guy, finds some answers talking to Shera and they decide to fight the bad guys together. Obaro – a mage man, actually the first one to be played as when game starts. Obaro came back into existence the moment Kanata's power of memory was awakened. His past is unknown but expresses a feeling of remorse for his past actions. Obaro believes that Kanata is the saviour who will change the world to take its true form which leads Obaro to join Kanata's group. Dianto – beast with hammer, protector of certain village. Not much to say, a tank in the party. Galdra – commander and swordsman. If you played the game you will see what is wrong with his description in the review. I like this character the most, he is imperia commander and the best fight character you will have. 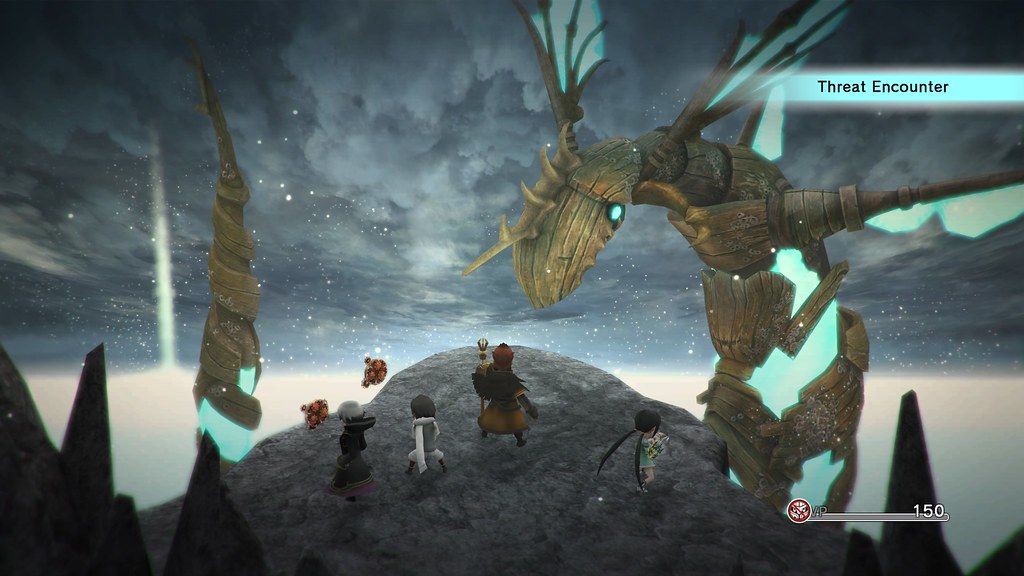 At least boss fights are somewhat decent. Every end of dungeon is your boss fight.

Through the game you will travel world map on foot, sail with your boat and fly the airplane. Map is simple enough, filled with harvest points which will give ingredients for food which you can buy in Inn’s and with memories which you will use for developing your skills or support skills which we will get into later. Towns are unique but yet very similar. There is not much towns in the game. Dungeons are the worst point of the game I would say. Why? Because they are all the same, just differently coloured. It’s a mystery why they don’t invest in anti-generic dungeon designer. You will go through typical corridors where left is a chest and right is the way to go. Only dungeon I found good was Shipwreck but at the same time it suffers the same fate. 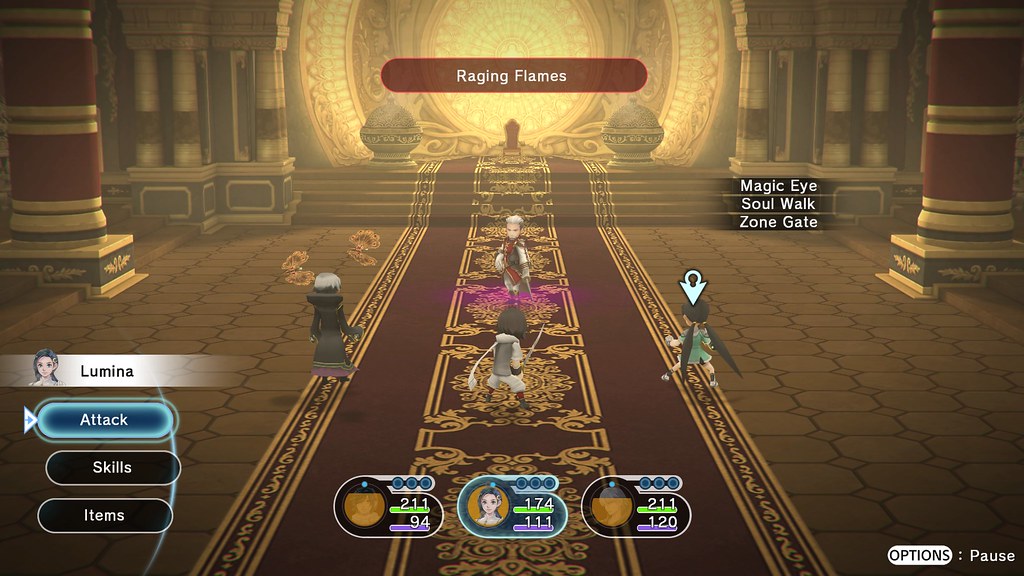 If you don’t know, a role model for both I am Setsuna and Lost Sphear was Chrono Trigger and some Final Fantasy titles. When you have that in mind you think “Yeah baby!”. When it comes to battles that is where you see most of that influence. Battles are decent. Every character has area it will affect with his attack. Skills are many and all of them different in a way they strike. Think of your battleground as limited circular space where you can attack in straight lines or areas. When enemies are closer aim for group spells or skills that can hit more. News here is that when you select your way to attacking you can move in the battle area to get different angle. That is important when you use straight line attack because from different angle and aiming different enemy you can maybe hit more enemies. Playing the game on normal difficulty is just enough. It’s not easy to beat a boss without using a bit of tactics. Options will also provide with Active Time Battle settings – active and semi-active modes. Difference is that when in semi-active mode you can enter skills or items and not worry about someone hitting you. It pauses all movement so if you prefer having time to think, you can use this mode. 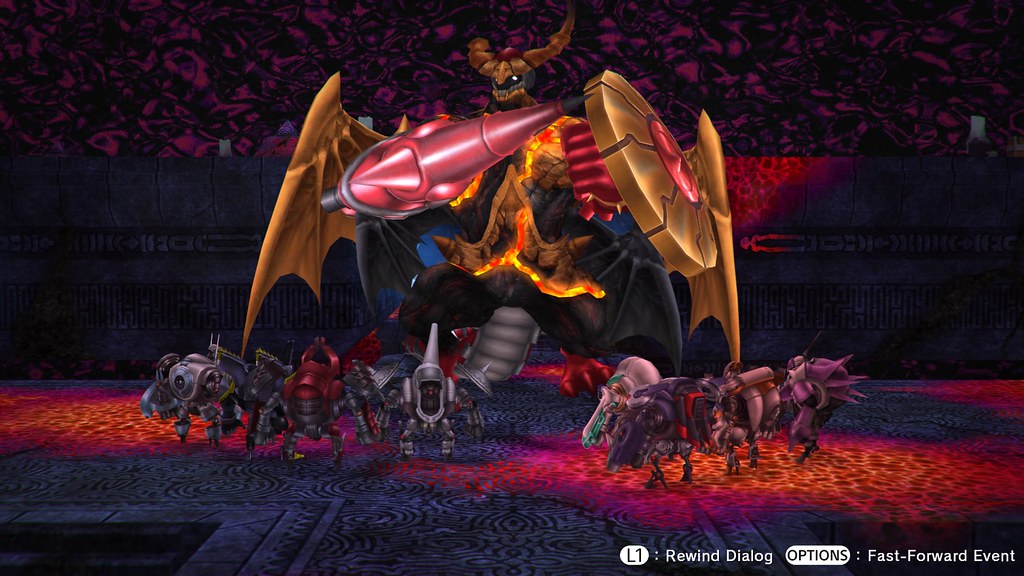 Vulcosuit mode on. Big bastards – check! Bring in on biatch.

Another new thing in Lost Sphear are the Vulcosuits. Think about them as wanzers from Xenogears. Hehe, if only we can compare this on that level. Damn I miss Xenogears…So, on your journey you will gain ability to switch in Vulcosuit mode. They provide higher defence and almost everything your main character has. I fought many boss battles in them and they kick some serious ass. But it’s not that you can always be in them, there is VP bar which drains with every attack you use in them. You can switch back with one button in fight so you are not bond to state in which you enter battle. Skills you will use in them are connected with artefacts needed to be restored in the world map with memories meaning not everything is here from the start. The other combinations are connected with skills your character posses. Vulcosuits can be used when you explore dungeons with additional support skills like Dash which will fasten up your movement or Scan which you need to unlock and it basically makes you 1 sec kill enemies without entering fights. Grind method at its fastest! 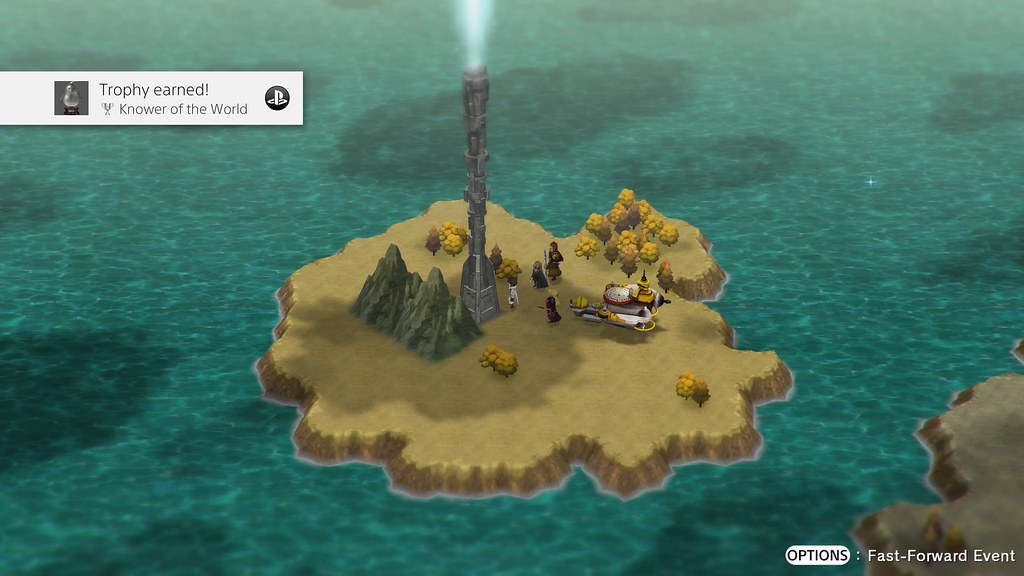 Apparently I know the World. If someone needs some help, I know the world!

What I like and hate is the Equipment system. You can equip only Weapon, Armor and Spritnite. Weapons change appearance which is cool. They can be upgraded in your local store up to level 10 which will raise stats weapon has. Same with armors. Weapons have types (fire, earth etc.) while armors have defence types as well. It’s not like it’s needed so much, but one certain boss will reflect all except null type attacks so for me. That was the only fight I had to develop strategy and preparation. For the rest it is enough to level up equipment and you are good to go.

The most complex and positive thing are Spritnites. They are very similar to I am Setsuna’s skill system. When you kill an enemy you get some type of Spritnite Memory. Each of those will be used to produce a skill for some character. In Town there is a vendor who trades this stuff. Give him memories and develop Spritnites, equip them and use in battles. Few of them are very strong later on so be sure to battle often and trade them. 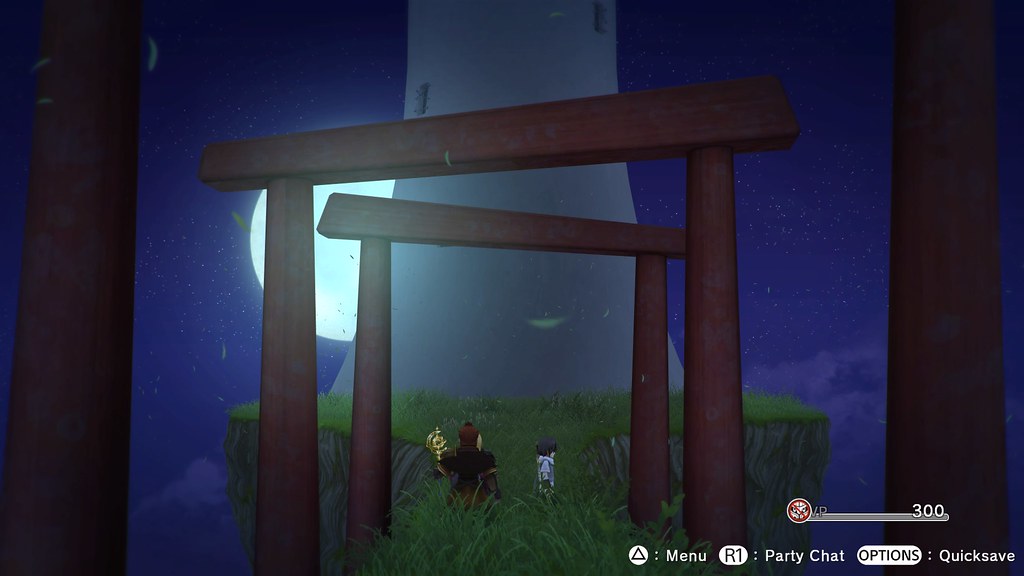 Rime anyone? Moons here and there. I wish bitcoin mooned this year.

Every Sprintinte can be infused with support skill of another. We will call it Memory Spritnite. Imagine you buy Thunder Enhance Spritnite and you add to some dark attack skill. Now, in battle, you can collect memory points. Up to 3. When you fill 1 (simply by attacking or getting attacked) you can use a button in moment of attack to fill it with memory power. And that is what gets added as effect when you press button in right time. Also it boosts the attack itself. If you are lucky enough it will sublime. What that means is that this skill has possibility to be added to Spritnite itself. Up to 4 times. Then you put some other (like critical up), raise it to level 4 again. One Spritnite can be levelled up to 10. I added Heal effect on damage all skills which made my life easier. I like this in the game, I really do. 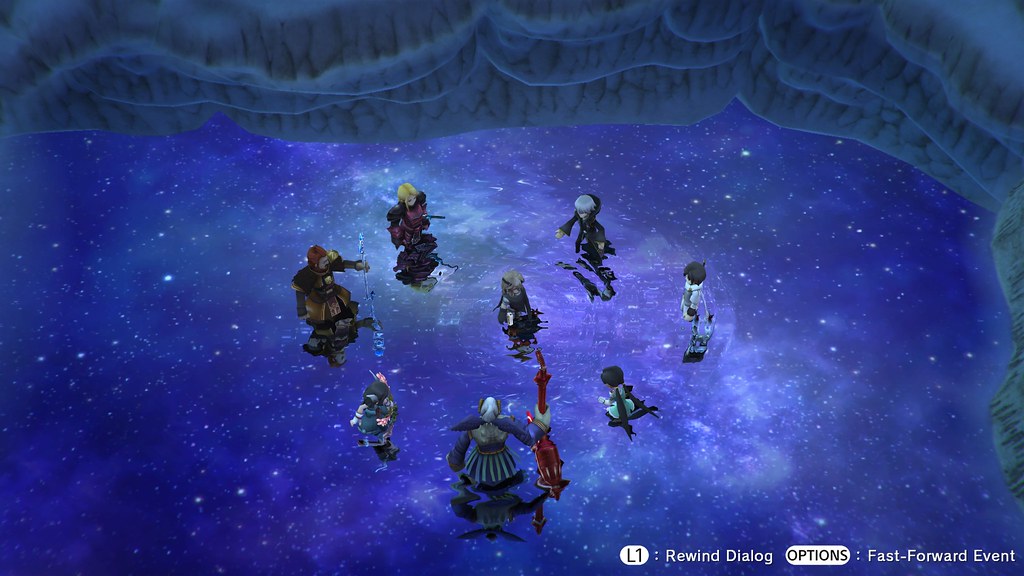 Mirror Lake – one of “nice” locations in the game. And a decent boss fight awaits here.

The last thing I want to mention is of course music! Very similar to I am Setsuna, it keeps the bar high. I love hearth-breaking music in this aspect. jRPG’s have this quality of having good music. Only thing is that game is not on that level to blend perfectly. Music is good but I never felt it because the game is just mediocre with slight highlights. 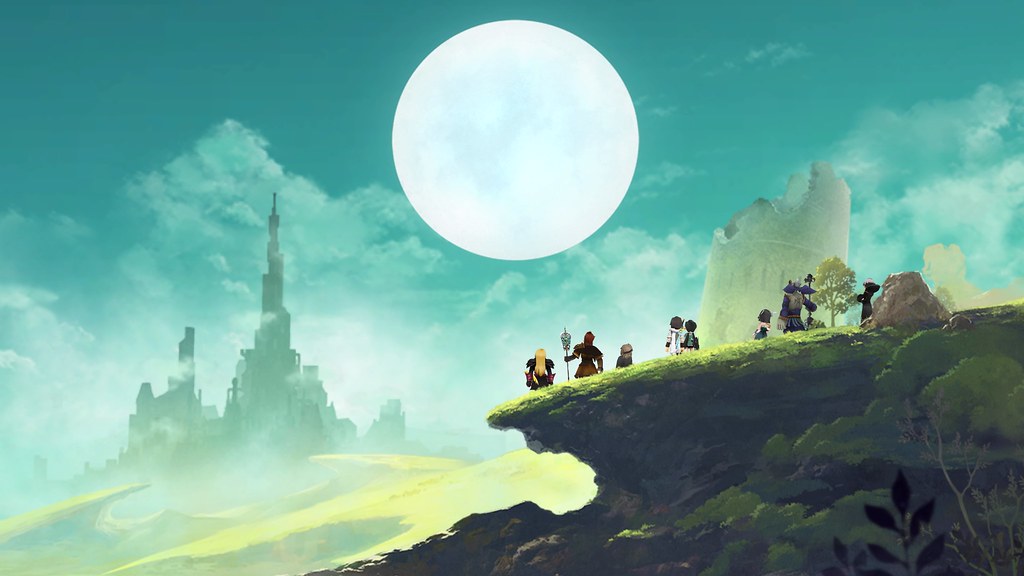 If only the whole game was beautiful as this artwork.

To sum thing up, Lost Sphear is a decent mediocre jRPG. Maybe in some areas above average. I am very happy that it happened and that Tokyo Factory developed it. But it should have been better, with better story and more complex stuff in the game, better dungeons and more complicated world. I am Setsuna kind of had better settings and felt a bit better. Overall, if you are crazy jRPG lover like myself, be sure to check it out. You will not hate it nor love it, but it will bring out memories of what jRPG’s were back then. And for that I am glad – nurture the jRPG culture, at all times.

"What had to be better turned out to be somehow worse in a sense. For genre lovers it’s still a decent experience."