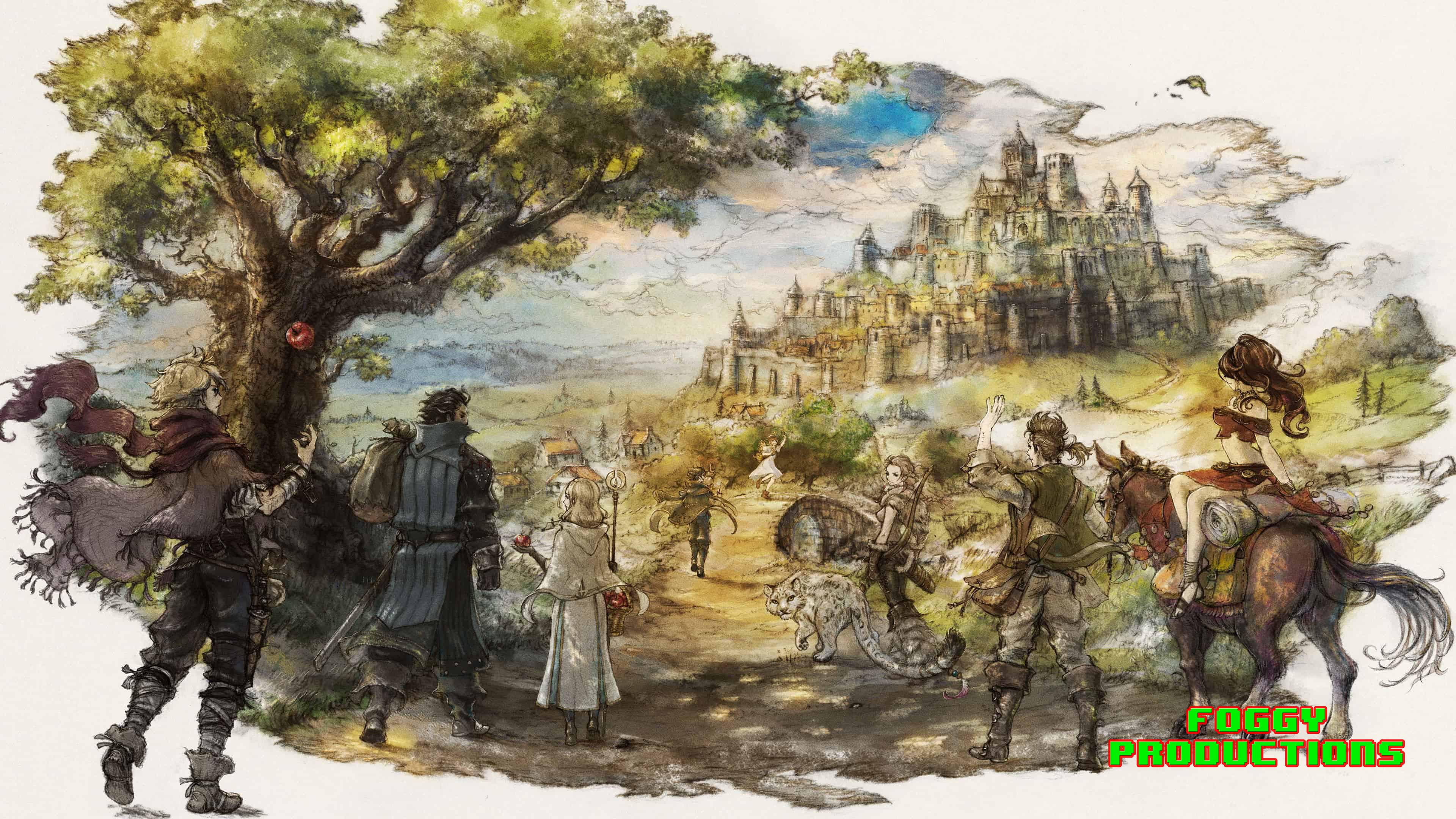 In periods with weak offer of turn based RPG, one old school diamond arrived. Octopath Traveler is exactly that, turn based RPG from Square Enix resting on ancient formula of success packed with SNES era graphics featuring killer soundtrack. It's here to resurrect what we RPG lovers love the most. 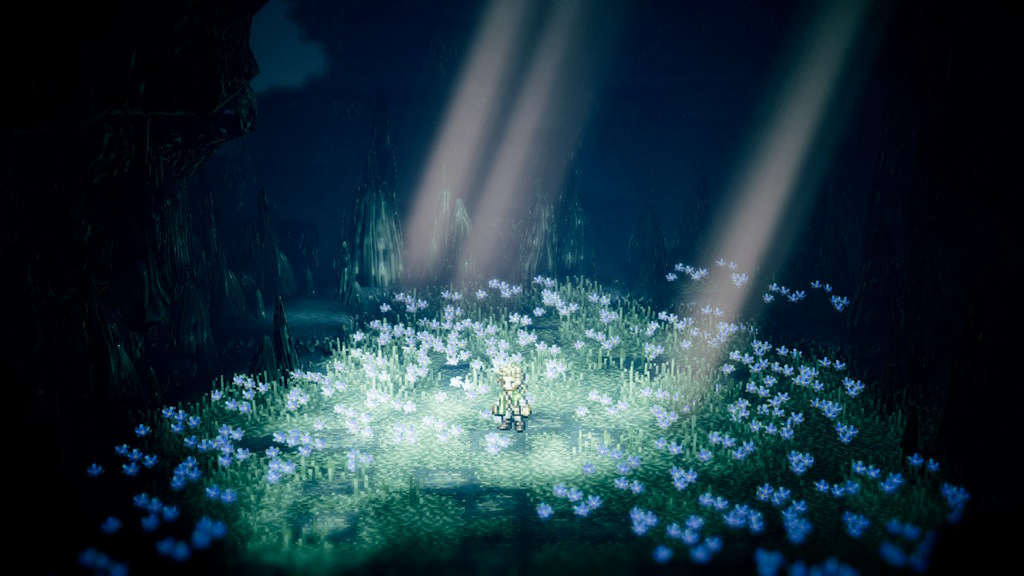 Look at me picking all the herbs. Gonna get you healed i am.

We can sum  the story in few sentences. Game evolves around 8 characters and their storylines in world of Orsterra. 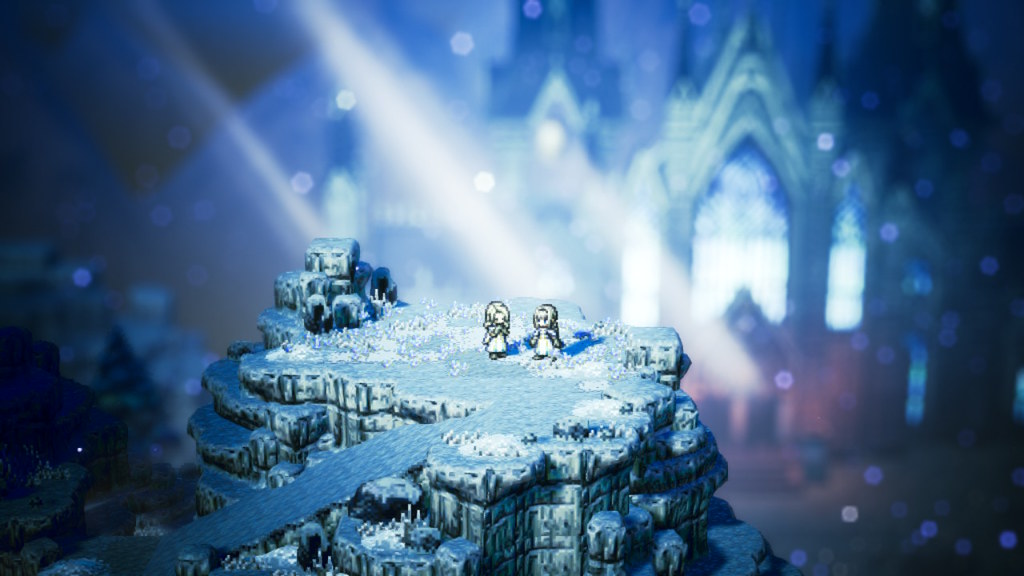 Sis' it's chilly, let's go. Nah, let's do some photos, look how pretty all around us is

I could say that story is weakest of all things that game has to offer. It's told in a very generic way and all was heard and seen already many times. What is different is that you can choose a character to start your journey with and then after one chapter you have complete freedom to collect 3 more characters. The rest (4 more) can be or don't need to be collected at all, but it's going to be hard without them because some fights require different approach. Look at collecting others as a must. Also each character have in game skills that interacts with NPCs so you will for sure need them. For example thief can steal items, Warrior or Hunter can challenge NPCs to fights (sometimes you can't pass some NPC so you need to beat him to move aside), Scholar and Apothecary gets information, Merchant can buy what thief cannot steal, Dancer and Cleric have the ability to seduce people so they follow you and that way they can fight along side you in battle (1 at the time). Of course success rate depends of level of character which skill you use. This in a way removes that shallow feel that story gives. Side quests in towns require combination of those skills. Fun fact is that when you get info from NPC it can lower shop costs or inn costs. You can switch party characters in local bars and you can continue chapters of certain character (if his storyline is in that town). 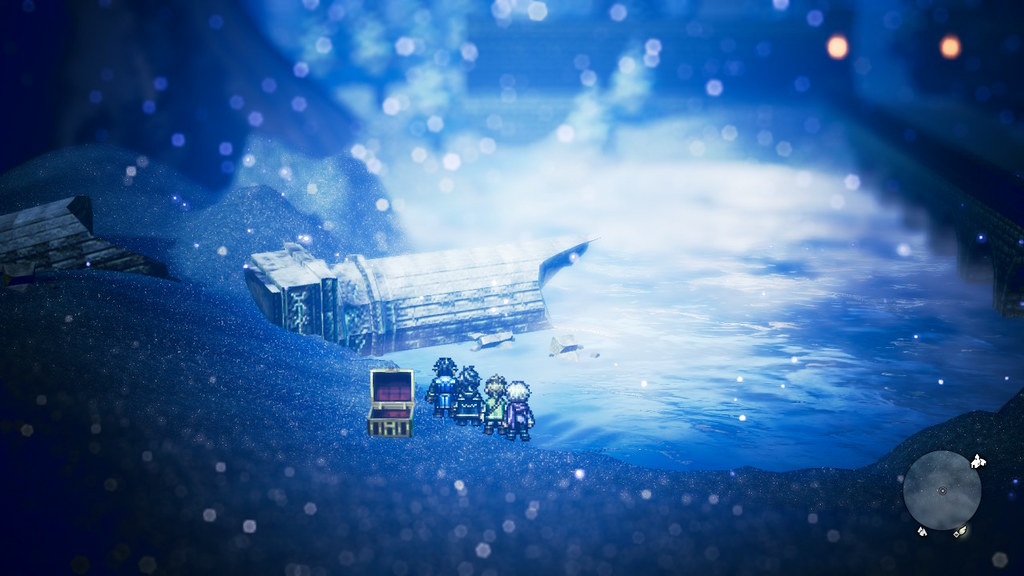 Exploring was never that ugly and pretty and the same time. Penetrating through snowy landscapes while snowflakes are falling and melancholic music kicks in background is all that you will need.

When i look back on exploring, all the locations and graphic representation i could say that it leaves better impression. Map is quite big, full of destinations you can explore and at the same time you don't need to, depends on you. Although locations are similar, when looking as a whole it looks quite nice. You will enjoy snowy lands, deserts, green fields, catacombs, caves and more. Each of those have different sets of enemies which will require different tactics if you want to beat them. We will get into that later on. Boss fights are fabulous, they are bigger then you so it scales good in a way that it represents how strong they are. World is also full of treasure chests, which contains all from items to weapons. There are also special purple chests which only thief can open but inside you will find the best stuff, so it will pay off when you need to return for them. 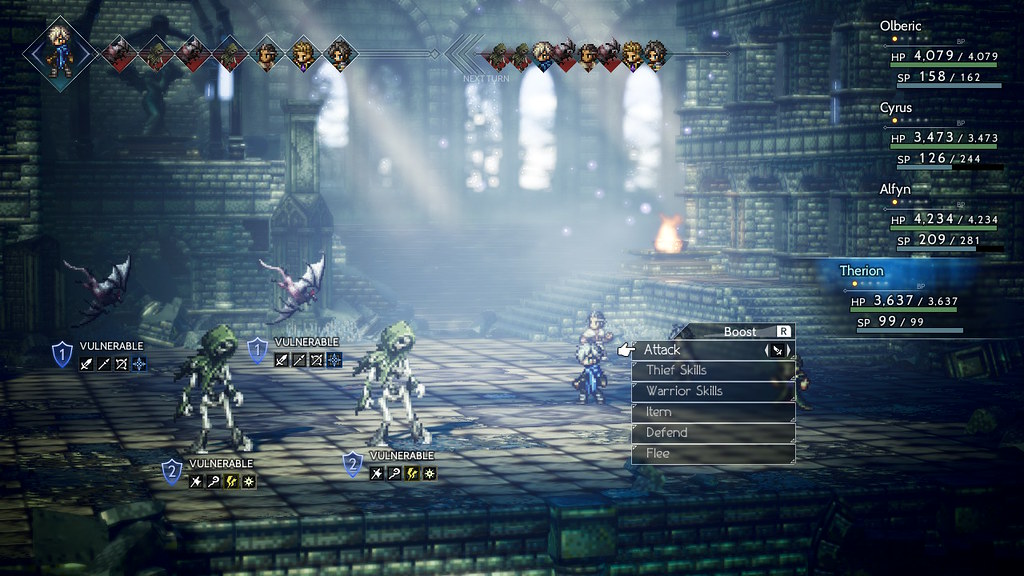 If i attack 2 times, then once with other team member, then 2 times with other...Oh man, let's start again...

"A line of skills, one Heal, cursing a bit, roll the first layer, next. And so it ends with animalistic pleasure when boost is ready to break spines."

Most important i would say, are the battles, skills and tactics. After 85 hours needed to finish the game more or less with finishing everything, i can't say that fights got boring. Let's go bit by bit.

Advancing with characters is as we all know it. After each fight you are rewarded with JP (Skill points) and EXP. EXP is for leveling up your characters and JP you will use to learn skills that are connected with Job your character is currently using. Soon after first chapter you will find optional dungeons that by beating them will reward you with side jobs that you can equip next to your character main job. So if you are a Warrior and you find a Hunter job, you can add Hunter as side job. With Hunter as a side job, your character will combine what both can equip/do. Side skills will also be available to equip (4 per character), which is good to develop different tactics.

Warrior for example has a sword, while Hunter attacks with Bow and Axe. Those are important combinations, because what is most important in battles is to penetrate defense of enemies. And how to do that? Simple as that, when enemy is vulnerable to swords, bash with that! Every enemy has different weakness which is either type of weapon or magic. First when you initiate a fight and when you see enemy for the first time you will not know about weakness point until you start attacking. If you attack with weak type you will see next to them a small icon, so you will have a hint forevery next fight. 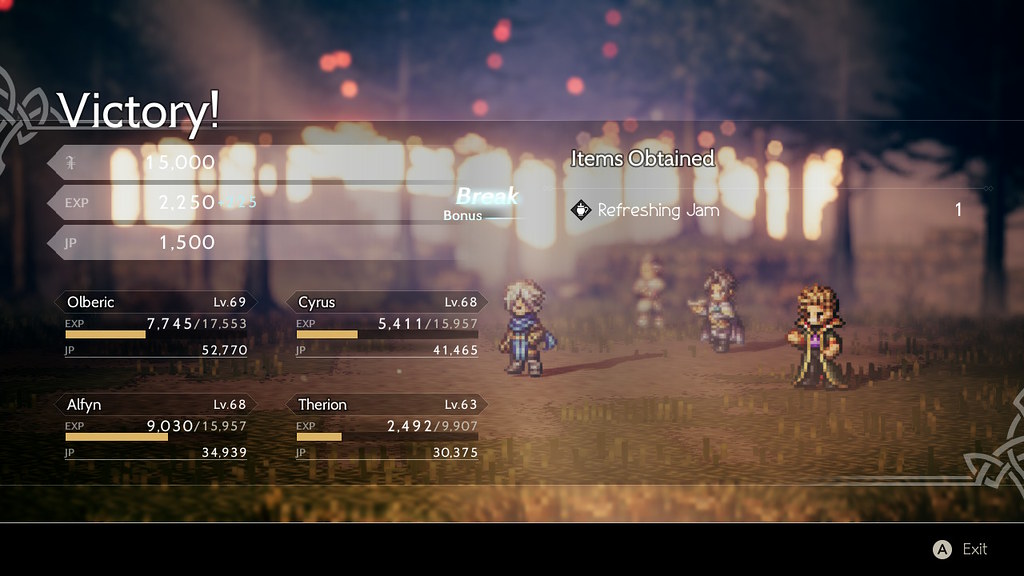 Just one more level, to round up. And then the rest...And then a bit more

So when you know weakness you need to hit certain amount of times to break the defense, after that enemies are in stun phase for one extra turn to nail them down. But that's not all! Each turn will give you extra BP, which you use to raise number of times to attack, also to make them stronger. So, the best case scenario would be - break defense so that you have 3 BPs after that turn, pump attack 3 times and then fire up the best skill of simply attack 4 times. Every shot is critical when enemy is stunned so now imagine what can you combine in battles. It's so much fun and works fast and fluent.

As i mentioned, every job has side skills, like support skills that are limited to some job. When learning main skills for the job you will unlock those support ones. They are something like HP +500 or break limit with Warrior that will open more than 9999 Damage cap. Combinations are wide, i went for tank build with attack, 2 magic ones - Cleric to heal and Apothecary to heal as well. Last was thief combined with merchant. Thief lowers defense, steals SP, share SP to others, while merchant transfers BP to anyone. I found it to be the best combination producer.

Effects are decent enough considering the graphics game offers. Boss fights are really intense and well designed. Sometimes with bad approach you will find yourself dead before you know it. 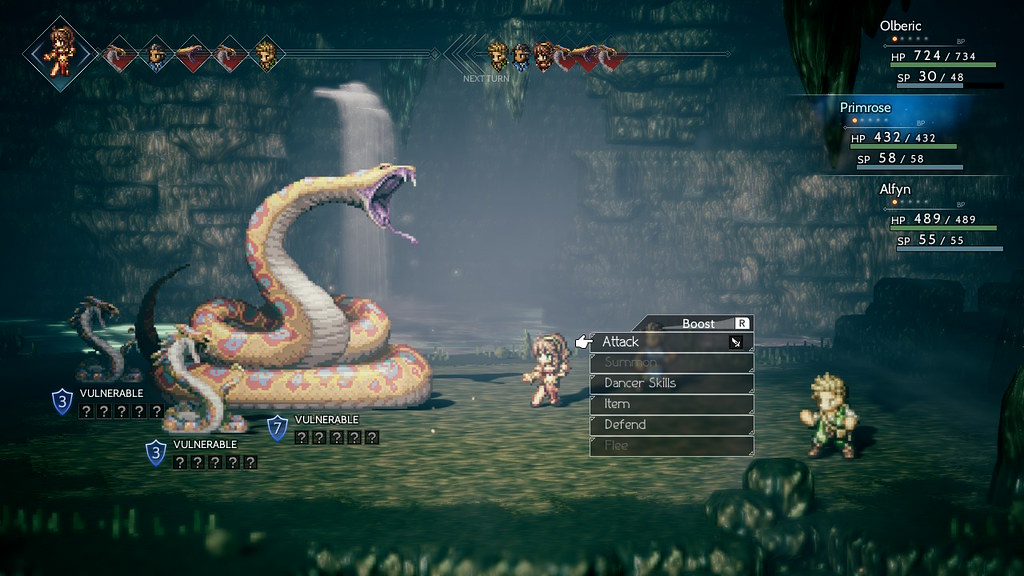 There there, open your mouth so i can kick you better

"Oh Octopath, skill and grind me!"

What frustrates a bit is that you will play practically whole game using default jobs. There is some optional stuff later on that can change that a bit, but i will leave for you to explore. Most of the game I ended up using default jobs since I developed good strategy soon and it worked fine.

Inventory is typical - equipment, heal, skills etc. Nothing spectacular, but you will often combine support skills in different dungeons, for example there is a skill that will lower rate of random encounters. It will come in handy when you just don't want to fight so often. But for boss fight that is not important, so when you are there you will need to switch with some other.

In the end I would like to give big kudos to game soundtrack. It's spot on. Melancholy and killer notes or just boss music on steroids. There are songs for every situation and it will not bore you in any moment. As for character voice acting goes, that part is not as good. Too much of game story is simply just text. Often they shout things like "Ah!" or "Oh!" while you read dialogs. They really need do more voice acting so we don't go blind before time. 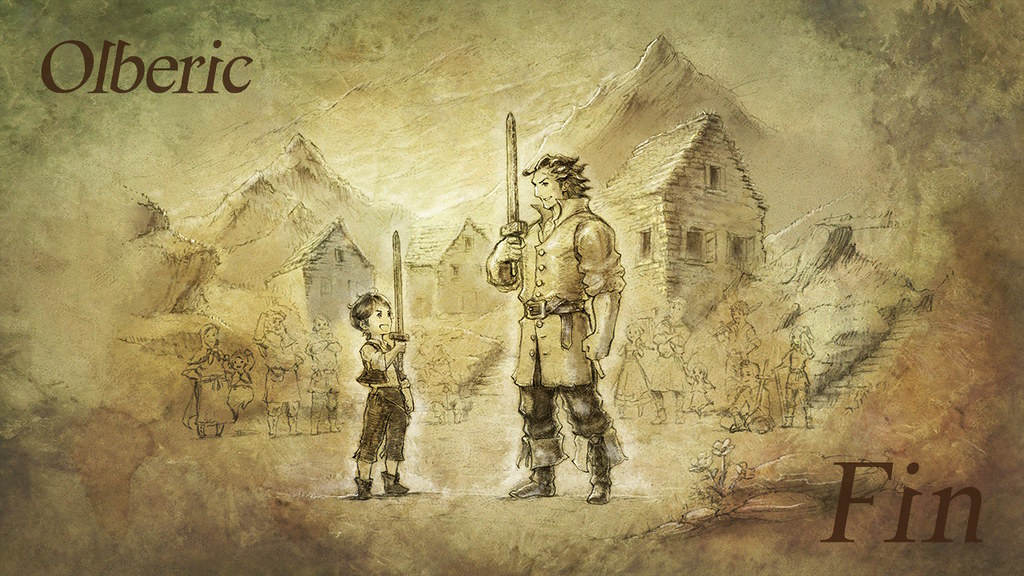 2 swords, one nose. That's our pride

It's so nice to play RPG where difficulty is medium up to hard without some flaws to overpower yourself. If you are looking for decent RPG, if you loved Bravely Default or Final Fantasy V/VI, this is some wild combination of those. Mediocre story, above average battle system, leveling through job system with plenty of weapons combined with really good music notes and solid side quests - that is what Octopath Travlerer offers.

"If you like a good jRPG and you miss that old feeling of old series of genre, then this is a must-play for you."