Review | Shadow of the Tomb Raider

"End of a Trilogy or end of the World? Kill, survive, loot and you will find out. Latest in series doesn't offer as much as anticipated but it is still a decent experience." 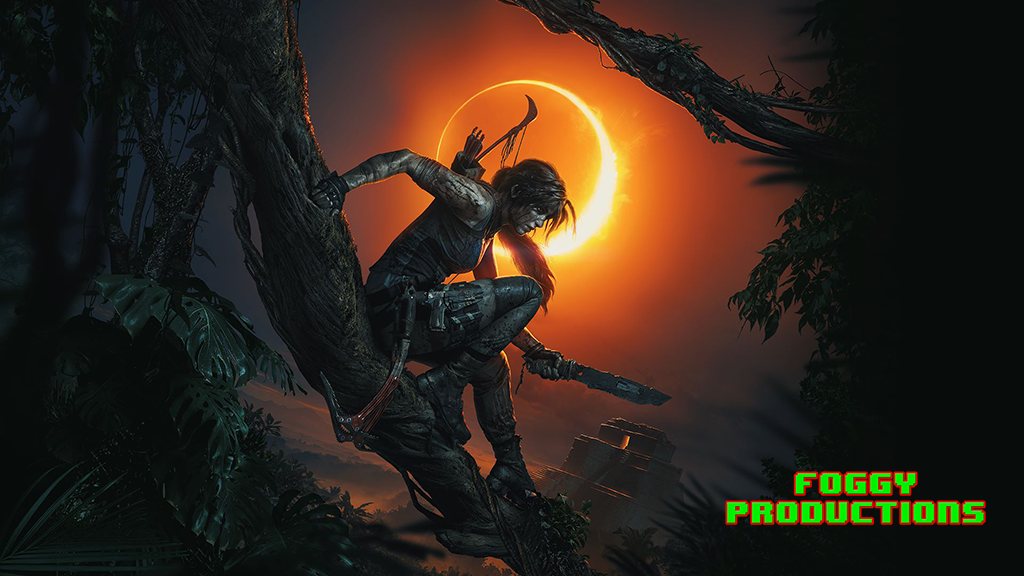 New, third and final entry to Tomb Raider Trilogy is Shadow of the Tomb Raider. It's an action-adventure game developed by Eidos Montréal in conjunction with Crystal Dynamics and published by Square Enix 3 years after "Rise of the Tomb Raider". Voice of Lara is Camilla Luddington once again. Is the game decent? Is it the best of all 3? Let's find out! 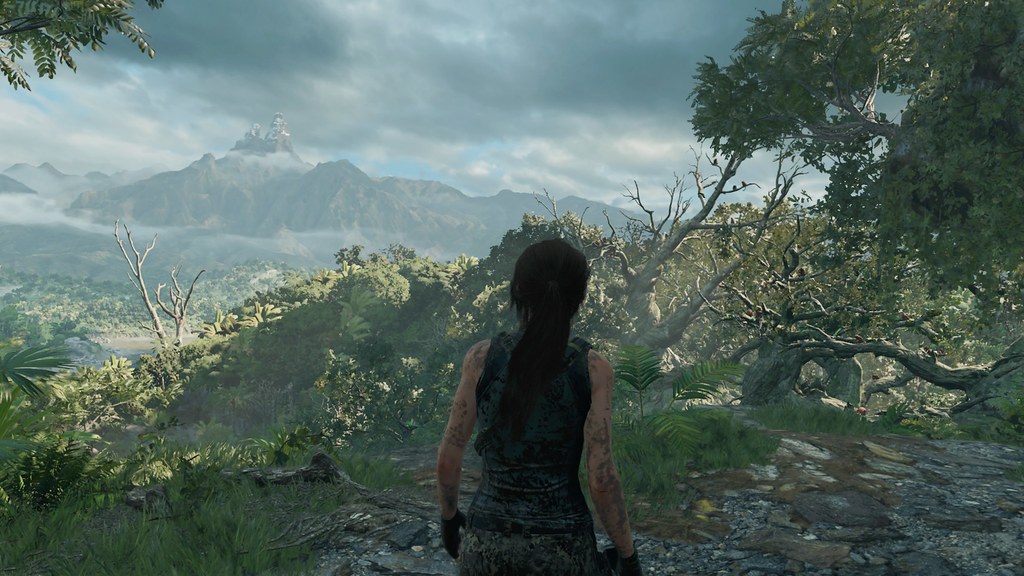 Mud, Lara and beautifull view - what can go wrong?

Lara's story is set shortly after the events of Rise of the Tomb Raider, following her as she ventures through Mesoamerica and South America to the legendary city Paititi, battling the paramilitary organization Trinity and racing to stop a Mayan apocalypse she has unleashed. Sounds kind of cool in theory, but in the game itself and how all is implemented - I can't agree. 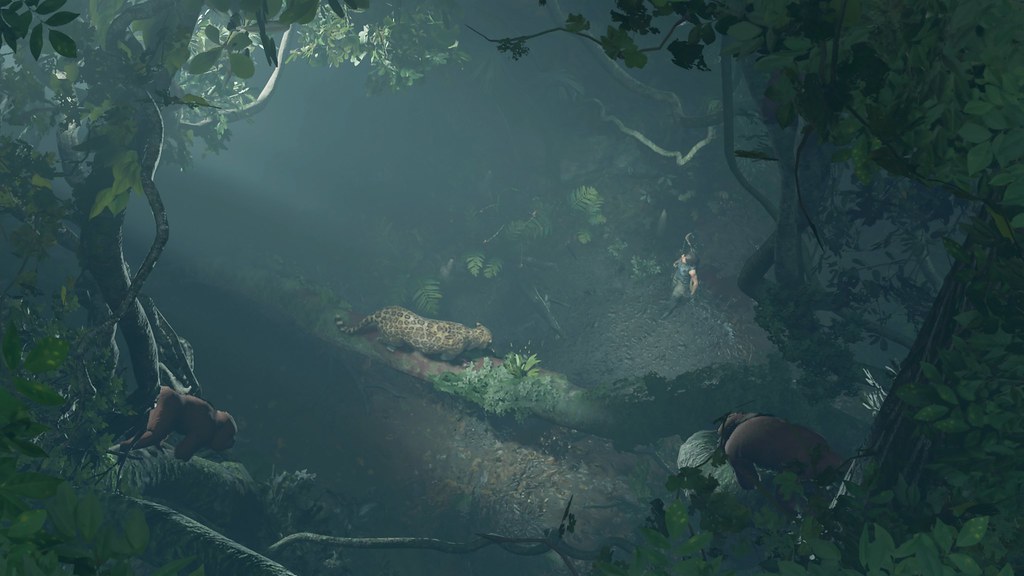 As usual, everything is trying to kill you. Do not pet the cats.

Through the whole game I had the "meh" feeling. I never felt the story nor it grew on me. The reason is that all characters are so shallow and un-interesting combined with mediocre voice acting. Your companion Jonah is similar, only time when you see him is rarely in beginning of some missions and in the end, always making his way and showing there like it's nobody's business. They also did a terrible job with audio logs when you follow some NPC talking about mission and such. If you are far away you can barely hear what he/she is saying. Titles are a must. But then again, they are so boring that you just want to be over with talking and move to action. 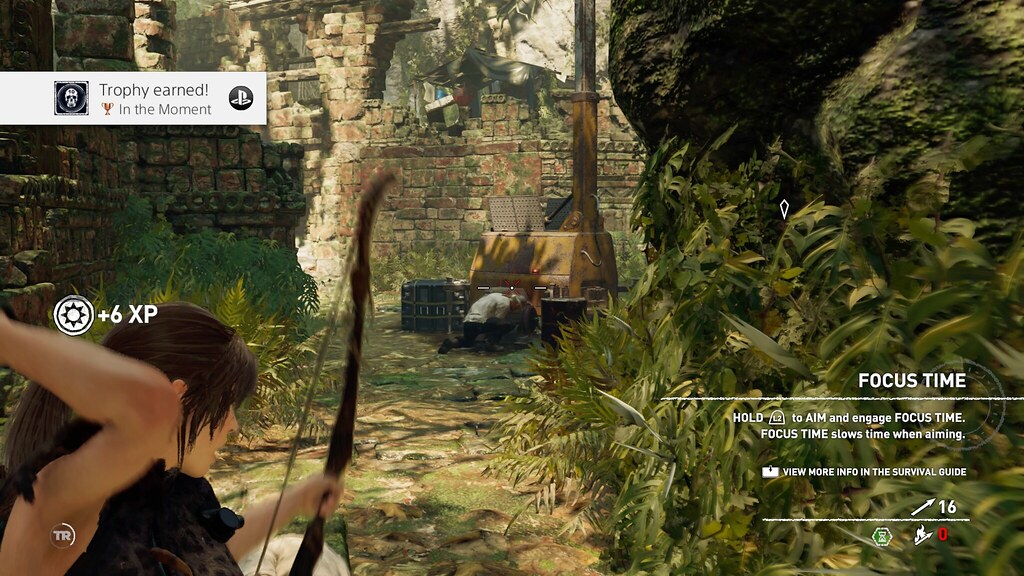 There is just something about those headshots with a bow. Feel good.

Action segment of the game is mediocre. Every area where the enemies are have the same approach, sneak or shot like crazy. How they imagined it is that you sneak and silently kill all of them without noticing you using environment as your friend. You can use grass to cover your position, mud to cover yourself and blend with same colored walls, climb branches up the trees...That part is not bad. When it comes to shooting and interaction it just feels clunky, not as good as some similar games with shooting sequences. As a plus I would like to mention Lara's bow, which I just love using. Other weapons are not as good to use. Often when you run away and want to aim it will get confusing as camera is also not the best.

Skills you posses will help you through the combat. You can learn them when you collect certain number of skill points which are obtainable by simply exploring, killing, collecting etc.  More or less it’s basic stuff to help you in your adventure, not much to say.

Environment is very usable. Many items you can pick up and use as Health recovery or combine to use some skills like improved accuracy or higher endurance. The rest can be used to upgrade weapons or craft different fashion sets along with ammo. Wood will be most important because bow is the main weapon and it’s great for stealth. All of this was already in previous games so if you played them you will be familiar with the concept. 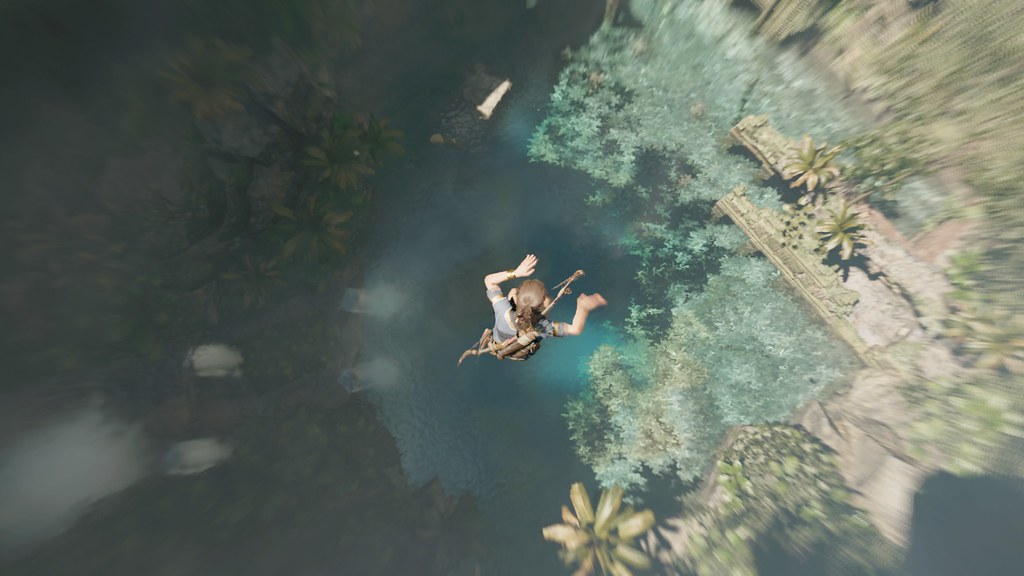 Lara is the real beast. No fear, no regrets, no problems.

On this point you are wondering what is good in this game. Well, it's a Tomb Raider like it was for past 2 titles. It's decent, it's still good. The best in the game are platforming elements like climbing, swimming and making your way through woods, rivers and mountains. I always liked that “Prince of Persia” approach when you climb. But for sure the game has that Tomb Raider scent when it comes to exploration.

You will wonder through semi-open world, mostly linear when it comes to areas outside towns. Nothing bad about linear approach though, there is enough tombs and crypts to explore to get you occupied and use your brain for puzzles. How hard they are is on you – when you start the game you can choose between difficulty for game itself and puzzles. Higher the difficulty, no hints and harder to crack the puzzle. Mostly all those tombs and crypts are optional. I would highly recommend doing them, it's the most fun thing in the game. 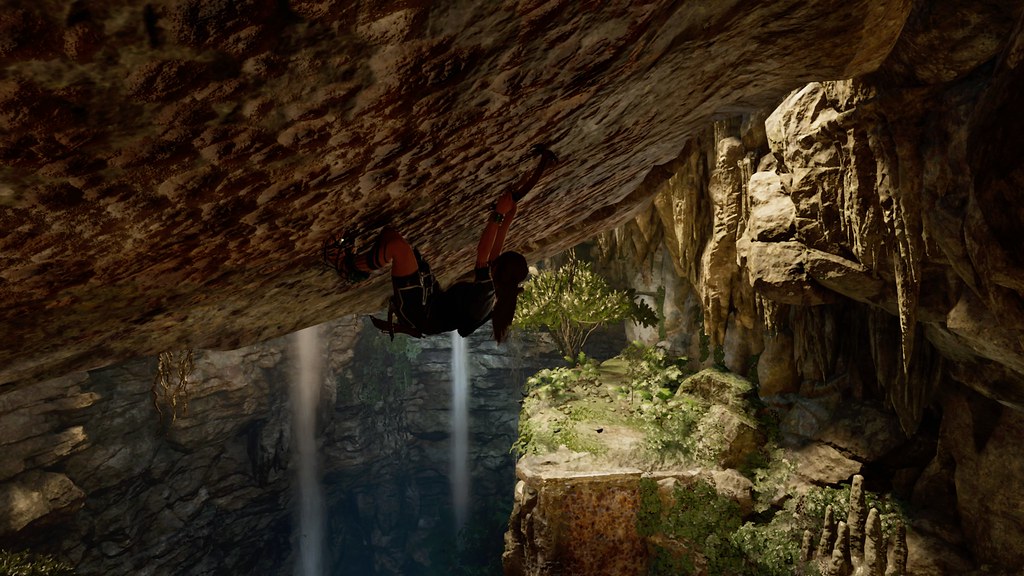 We all love platforming. Great stuff.

Like every entry from trilogy, Lara is equipped with helper accessories. There is hiking axe, knife, rope ascender, shotgun and your bow. Not everything is present from the start so some areas will be inaccessible until later on. No fear about that, there is fast travel for all visited areas and corresponding travel points you unlock. Lara is a real badass when it comes to climbing and using all of those; she climbs the impossible and she survives everything. They decreased “beat up Lara” scenes. If you remember first entry in trilogy, in there it was every so often that she is beaten up, pierced through or something like that. Maybe that is also a minus, not those scenes itself but more survival approach with high adrenaline sequences. 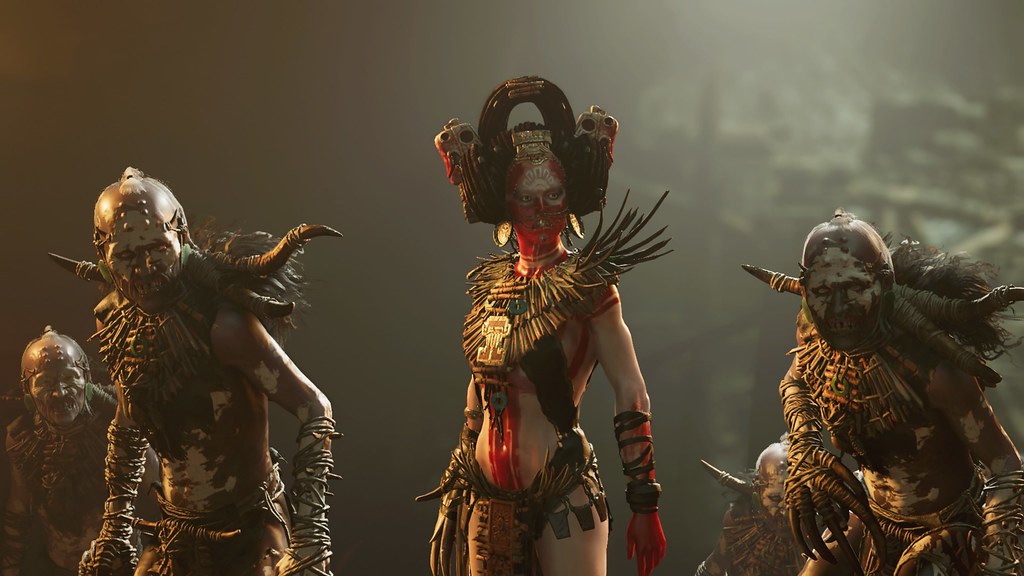 Who else can you meet in Tombs and Crypts full of carcasses.

Shadow of Tomb Raider will offer you 3 villages and people to talk to. It's a complete miss the way they did it. NPCs are so boring and only worth talking to if you want some secrets revealed but in the end they are really not important. Also, there are side missions initiated talking with certain quest givers. And all are typical fetch quests. Highlight of those is when you need to visit some tomb and solve it, but that’s all about there is to say. Rewards are not that great except some optional accessories to unlock or some trophies. 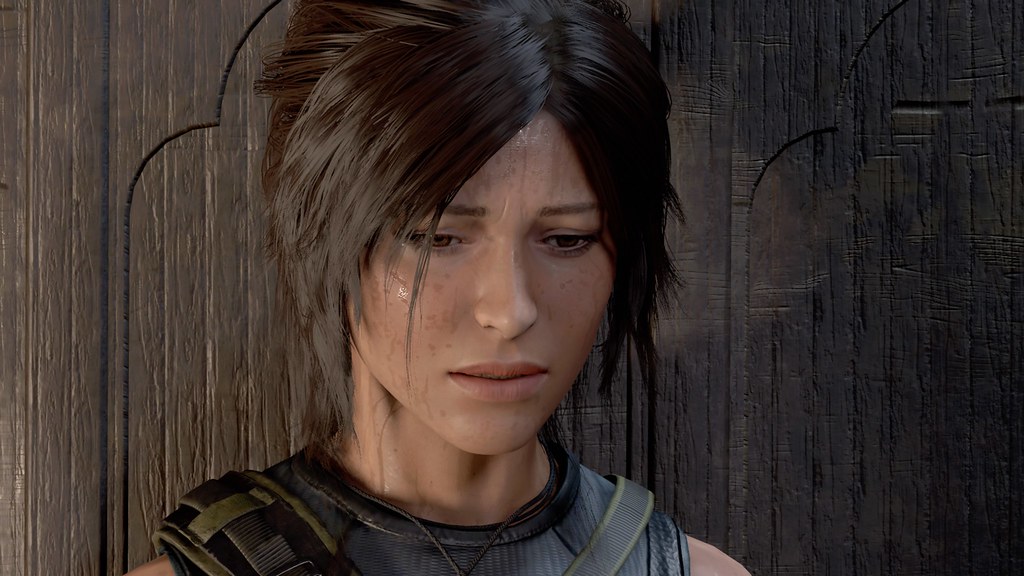 She is sad because this is the end of trilogy. I must admit, me too.

I would really hate to see Tomb Raider series get discontinued. Even though this title is maybe somewhere around previous one or even a bit worse, still it’s an ok game in general. Tomb Raider was always different and more badass from similar titles, and Lara is just a real icon. It feels like something went wrong with developing this game or like they didn’t had enough time to finish it properly. Latest updates fixed most of the problems but when the game got released there was problems like not being able to even finish the game. When you consider that and the fact that game was out when Spider-Man got released, “Shadow” is the good word where the game got in the end.

If only they invented some fresh stuff in the game. Formula for success would be higher and title would get more attention. This way, along with so many great titles out there, it will never break through. C’mon guys, we love Lara, make more games and make them better and more interesting, include better story, fix combat and there we are. If you are only about the money and think that people will buy no matter what, you are very wrong.

"For all Tomb Raider and Lara fans out there this is still a decent game. For those looking for something innovative it can be a bit boring."