"A solid action RPG experience with solid technical issues on consoles. Xuan-Yuan Sword VII is linear, but fun. Explore what awaits you in the world of Chinese mythology, childhood love and few other thingies." 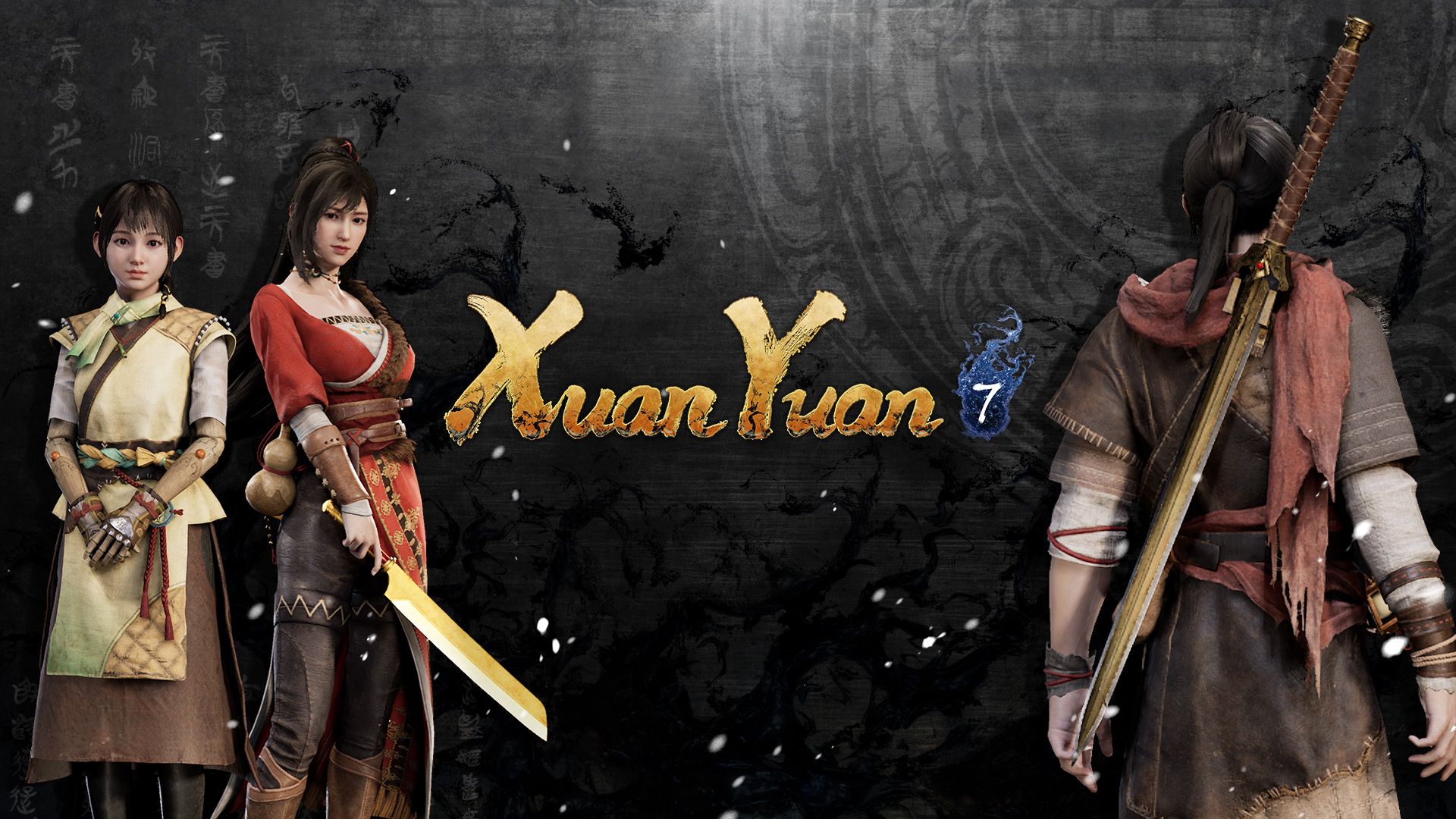 First of all, I had no idea about this studio (DOMO studios) and anything about their parent company. Xuan-Yuan Sword VII caught my attention on some news portal and I watched a few videos – I actually liked what I saw in there.

Days passed, new trailers arrived, console port was announced, even the western release. I must say, this company has the worst marketing ever. I was so confused when release date arrived, the game was nowhere to be found for consoles (at least digitally). I asked on every comment section, tried on official tweeter, nothing… Apparently the western release will be done next year, but the version for Asian market was ready alongside of the Steam release. English titles and Chinese audio? Fine by me. Even with all that info, I had troubles finding this game on PS Store. Almost a day after the release it finally appeared on Hong Kong PS Store and I bought it immediately. 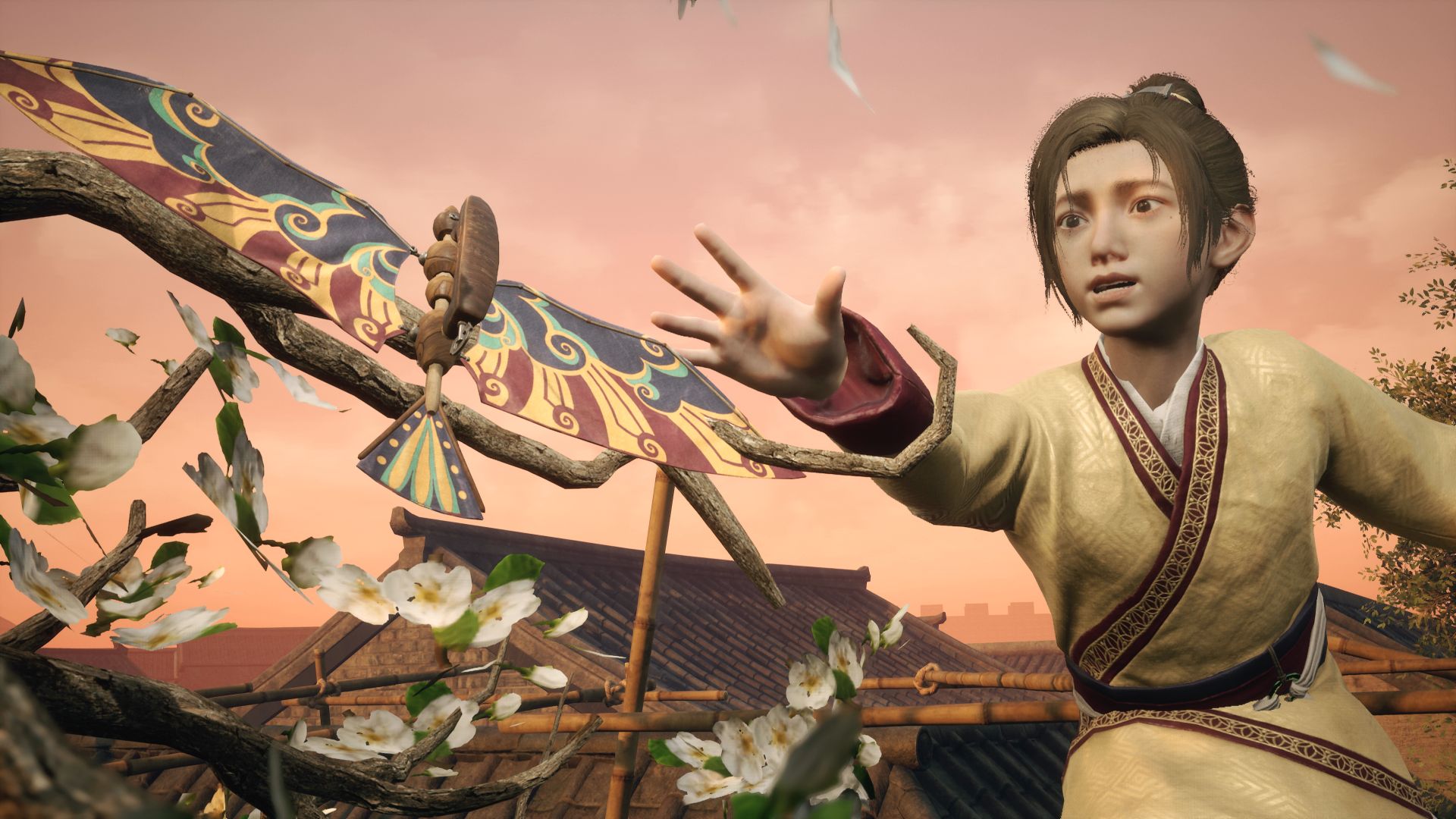 Once a good guy - alway a good guy. Protagonist is always here to help everyone (this will reward him later ho-ho).

This franchise is 30 years old. Wow. And I never heard about it. Apparently they are popular in China and Asian market, but for me, this was the first “touch” with the game. You don’t need to have any previous game instalment experience to enjoy this one and its story.

Xuan-Yuan Sword is a game about fantasy, love towards your sister and about the bad things that will happen along the way. Taishi is a young fellow who suffered tremendous tragedy in the past. He lost his parents to an imperial army, but he managed to save himself and his little sister. The whole game is about his adventure, his story and often they blend the fantasy part with the realistic approach. 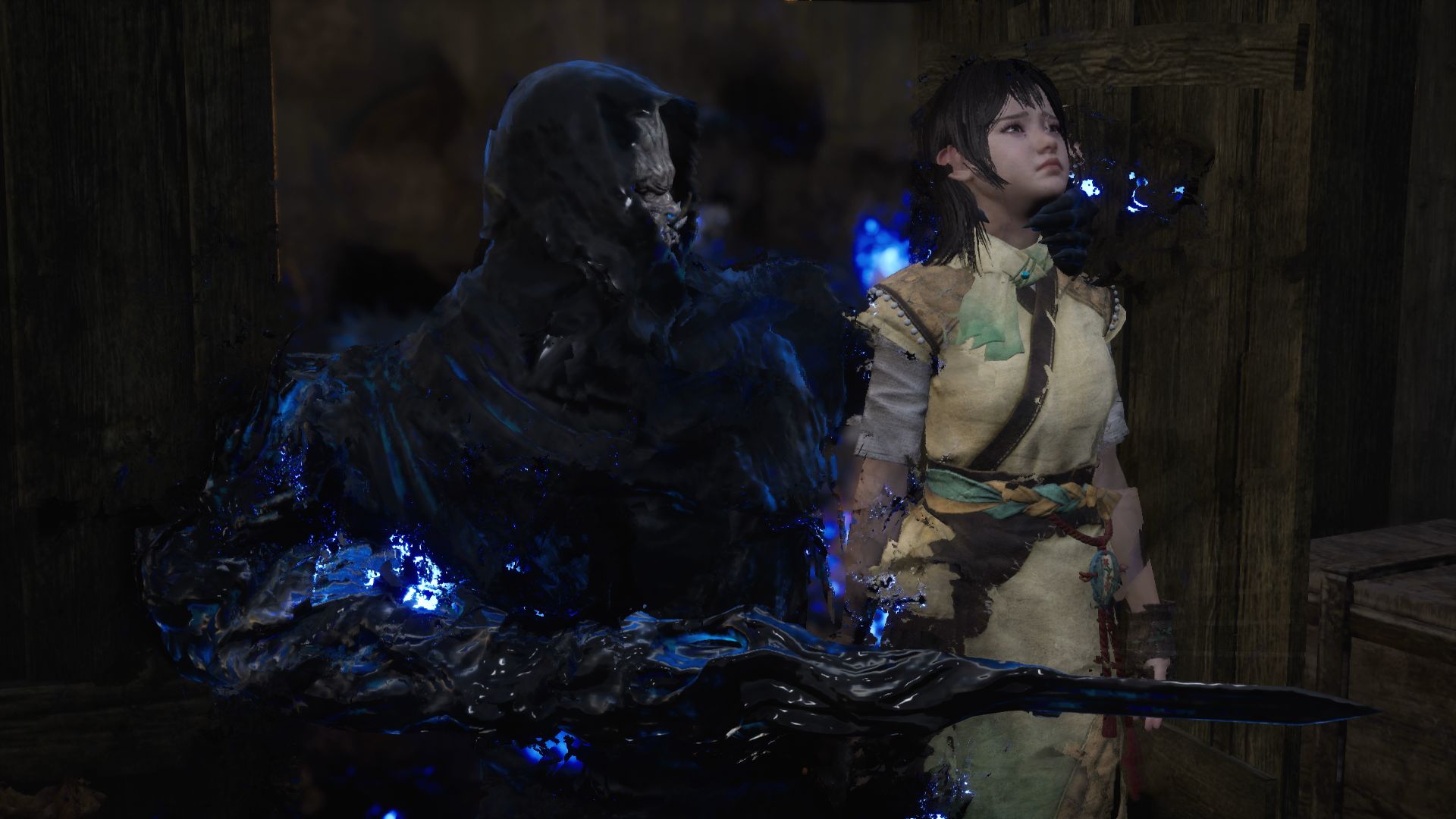 Play the game to learn who is this and what he will do to you and to ones you care about.

10 years later… That is when you start and soon you will traverse into the fantasy part of the game. You take care of your sister and do some work for the army, she is sick and she needs you. As your sister gets pierced a few moments later, Taishi will use his scroll and traverse to the tomb where ancient creature awaits. This forbidden scroll is the reason why the army wants to take you in, but the scroll is powerful and it can slow down the time, helping Taishi to escape.

To save your sister you will perform a ritual and her spirit will transfer to another form, thus starting the journey to revive her body. The story part of the game is decent, I really liked the mythology and quirkiness in some scenes. Expect mostly linear and often cringe storytelling, with weird facial expressions and often cut scenes when they shouldn’t be. The characters fail to leave an impression on you, everything seems a bit bland and awkward. Still, some dialogues are solid (all dubbed!) and later stages are far better in my opinion, especially with the parrot companion. I ended up caring about my party, just a little bit. 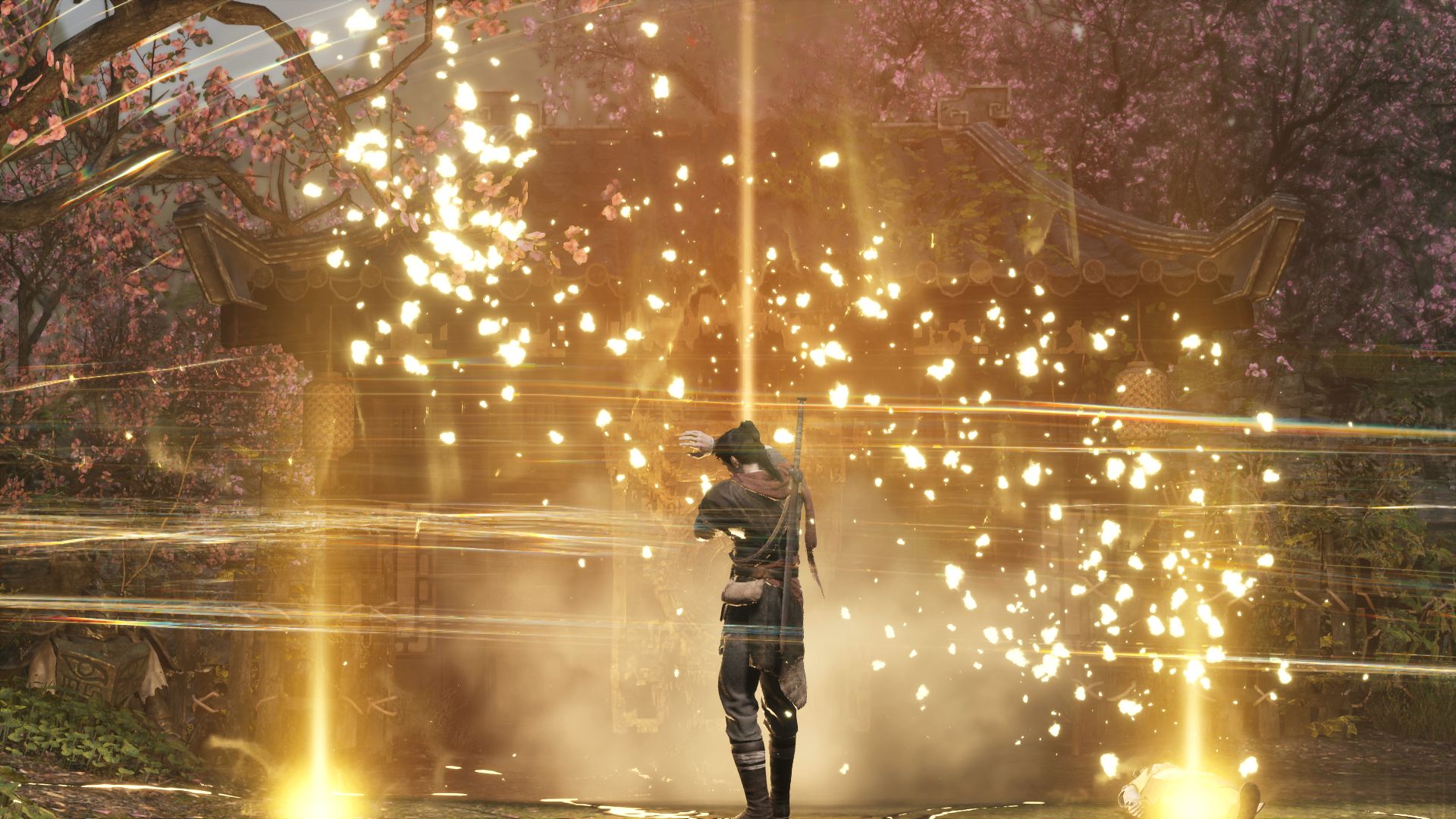 This event is the start of everything. Later on you will also learn about Xuan-Yuan Sword, ancient legends and many neat thingies.

This is mostly a linear experience in every aspect. Story is followed by exploring the linear world, navigating through narrow paths, settlements and doing story missions. I didn’t mind the linear locations so much, everything is mostly nature, green and nice in its own way. Still, when you don’t have much to explore, it can get a bit boring and unsatisfying. Dungeons and paths you travel across usually offer just few side paths and chests. The rest is filled with enemies and a bit of platforming (which is really bad, especially when you climb some edge assassins creed-style, it takes forever).

I hated the slow running. I also hated the default sensitivity on your axis’s. Put that on max. Mostly you will run from one part to another, while killing enemies and collecting loot. Strangely, I was not bored with this, even though sometimes you need to run back and forth in the same dungeon. There is one mission that will make you run 3 times back and forth in the mountains. That was boring. Also, one side-quest makes you talk to the same people in the village for 4 times. What the hell is with that? 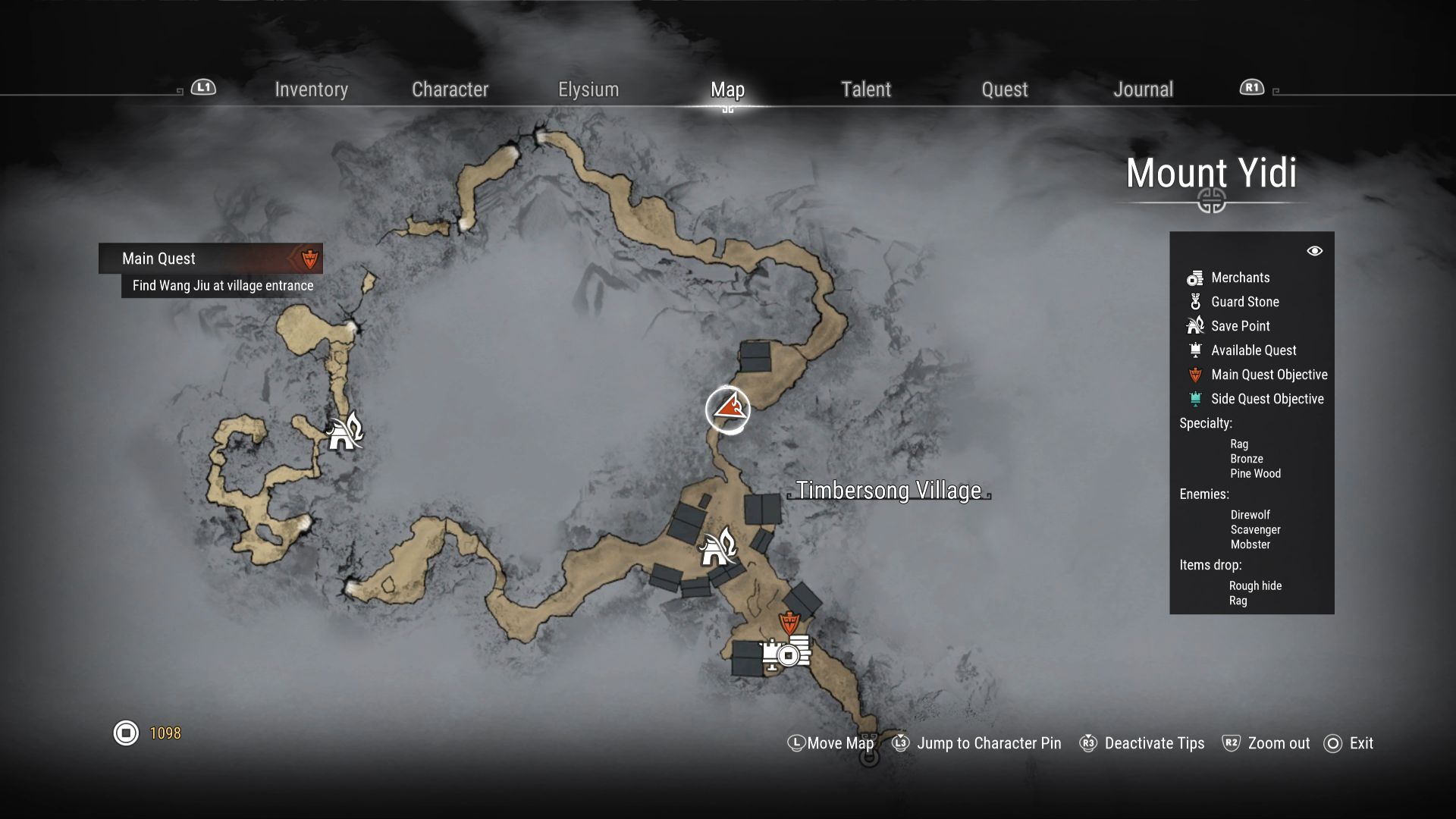 I miss having the map when I walk - you will have to open the menu every time if you want you check your map.

I highly doubt you will get lost in this game, even miss some chests. You can break jars and frog-like totems for recipes, items etc. Do that. You can teleport through the teleport points and there is a solid map for overview when you need some pointers. All quest and side-quest pointers can be found on the map. I also noticed some glitches when you enter a new area - sometimes you need to reach the story pointer to reveal that part of the map, otherwise it seems like you are not here and like you've never explored it.

The world-building seriously miss some details. Maybe the low point are the towns. They are full with random NPC’s who never say anything interesting. Town designs are poor and every building is mostly the same. Also, not much you can explore except breaking some jar here and there. The map is more detailed than the settlements. 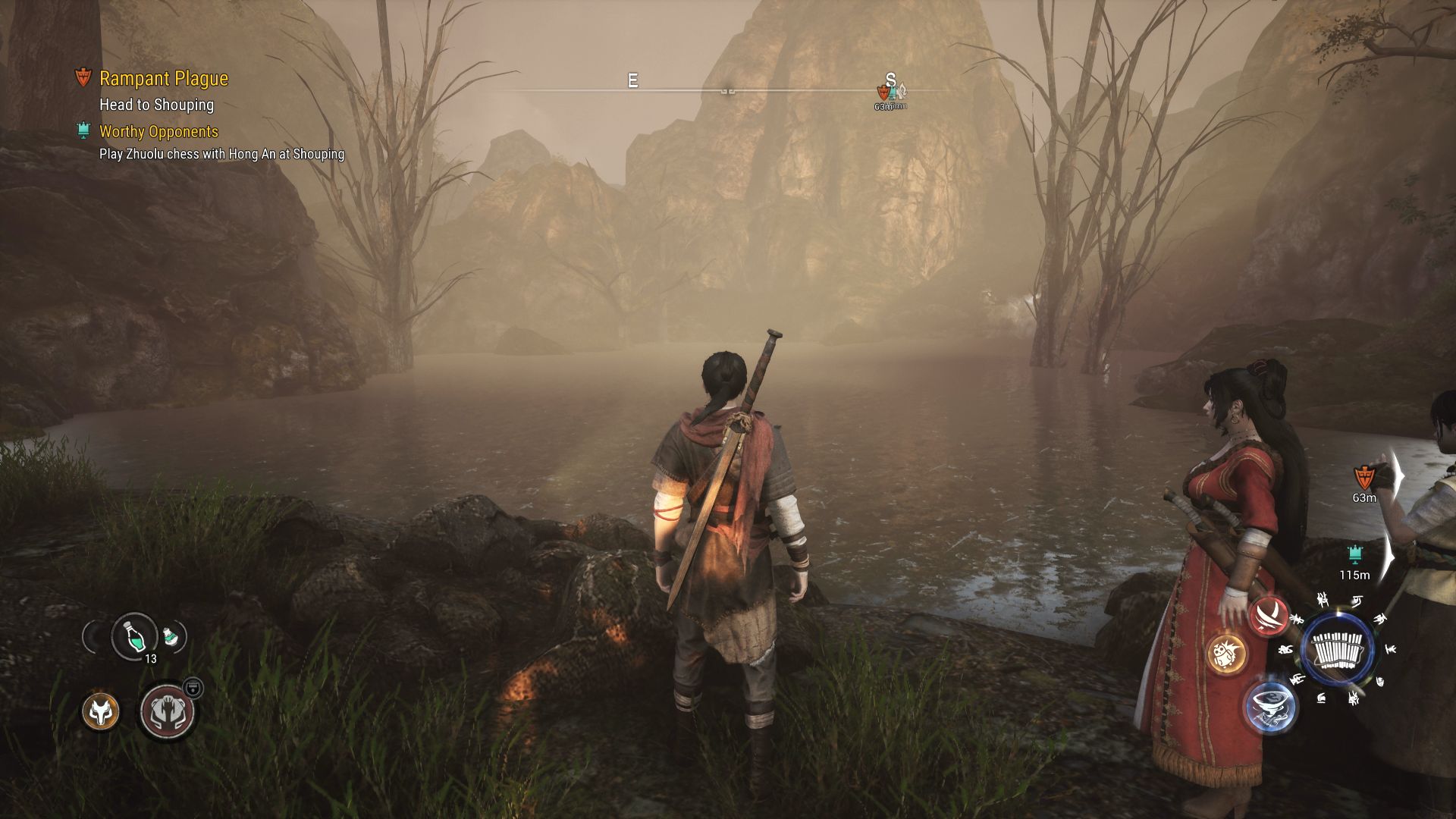 Locations can get a bit repetative and not unique - still, I found the exploration to be satisfying enough.

Action RPG eh? Fighting in this game is… Awkward and good. When I started, it felt so stiff, camera was (and stays) bad, it felt really mediocre and frustrating. But with time and progressing further it got more natural and fun in its own way.

You have 3 companions and only 1 weapon with each. You can upgrade those by fusing items in Elysium – I will get there soon. I miss more weapons. I really do. The weapon skills are only few. That felt underwhelming. You unlock them all before the half of the game and you are left with the same mechanics towards the end. Basic attacks are always the same, skills can be levelled up and on the last level you unlock their specials. That is a good way to defeat a boss. This is all just too minimalistic, I expected more in an RPG.

As I mentioned, you have the scroll. When you fill the special meter you can slow down your enemies and kick them fast. There is also another special which will suck enemies when they are low on health. You will need to spam that if you are into crafting and making emblems for your special slots. Sucking them collect special sigils and items that are not obtainable in any other way.

The whole game is easy, expect the boss fights. That is where the game spikes. Be careful on your first boss fight. The rest of the game you can just button mash, but not the bosses. They do require a bit more tactics, some healing items and a bit of dodge. I often found myselft mashing and dying becaouse of that. 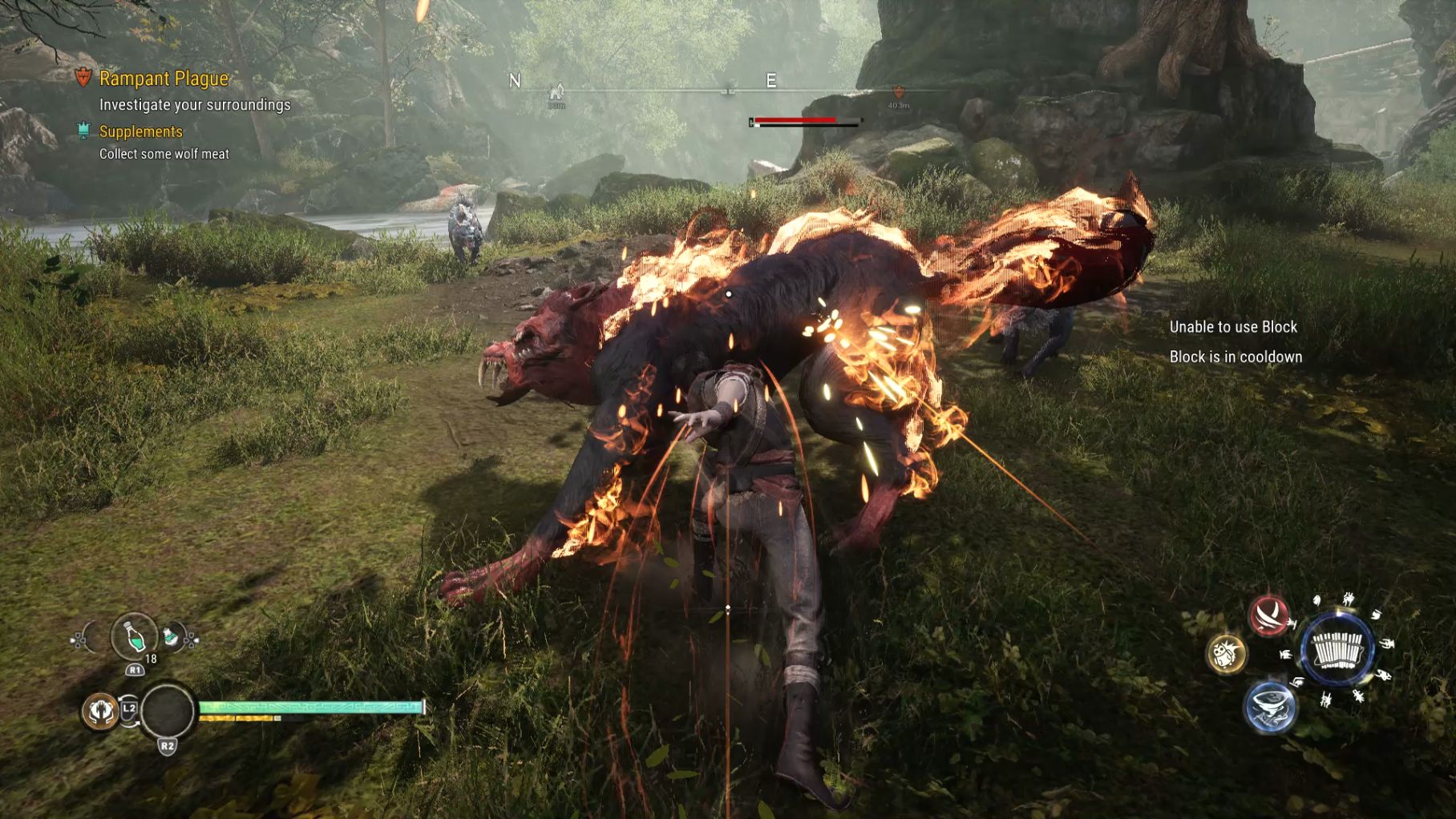 You have stamina and health, items and skills. The battles are usually a button mash with some skill here and there.

So, there is the Elysium. Imagine that as a menu part where you can upgrade buildings in which you then craft. You can build and upgrade weapon building and there you can upgrade your weapon of course. You need to raise levels and collect materials to be able to progress.

You can also develop new armors, accessories and fuse items to get different ones. Overall, this part is also nothing spectacular, but I did everything here. Some sigils that you get can be equipped in your special talent slots and they can raise attack by 15% or grant some other neat buffs.

What is left are levels of your characters, but everything levels up automatically and not much more I can say. Everything felt basic and way too simple.

I have no idea why they introduces the appearance option for your weapon & armor sets when you don’t have anything other to customise that are not your defaults. I guess they will add new sets? 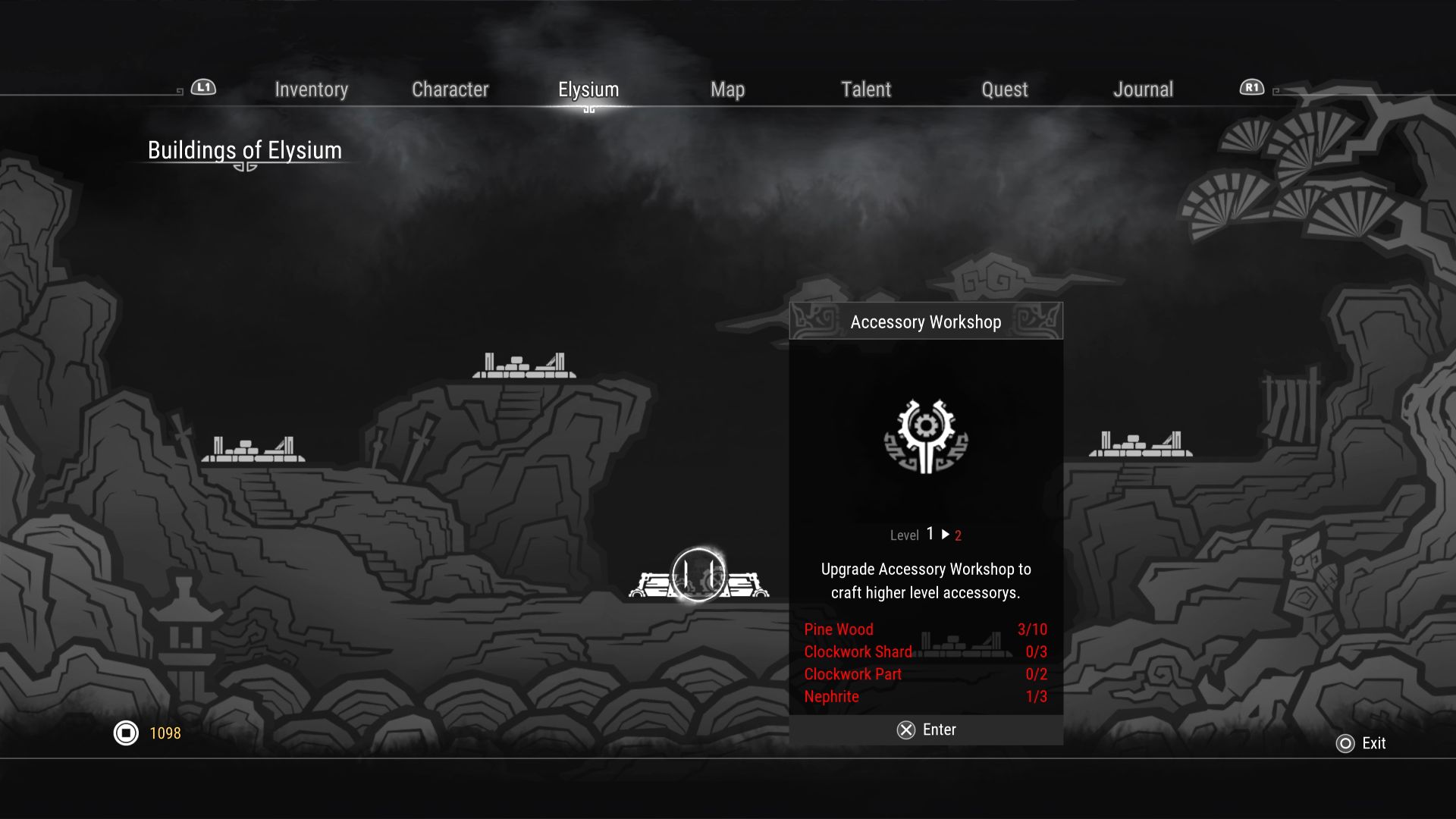 Everything you farm, collect, find - can be spent here. This is where you make and upgrade your equipment.

The biggest issue I had was the technical performance of the game itself. Often when you reach bigger settlements it will run in 2 FPS, everything will be jerky and slow-ish. I saw the PC version and it looked much better from that standpoint. The last few boss fights were a bit problematic because of this.

The rest of the problems will emerge when you lock on the target and circle around it. The camera is just way too awkward in some situations. You will bump into buildings and not see a damn thing.

And for sure you will notice the transitions between animations, they are just terrible. When you finish some scene often you will see weird movements or your character or graphics will just go nuts. I hope they will polish it. That made the story and cutscenes look like they are just randomly put toghether to at least tell something and fill some gaps. 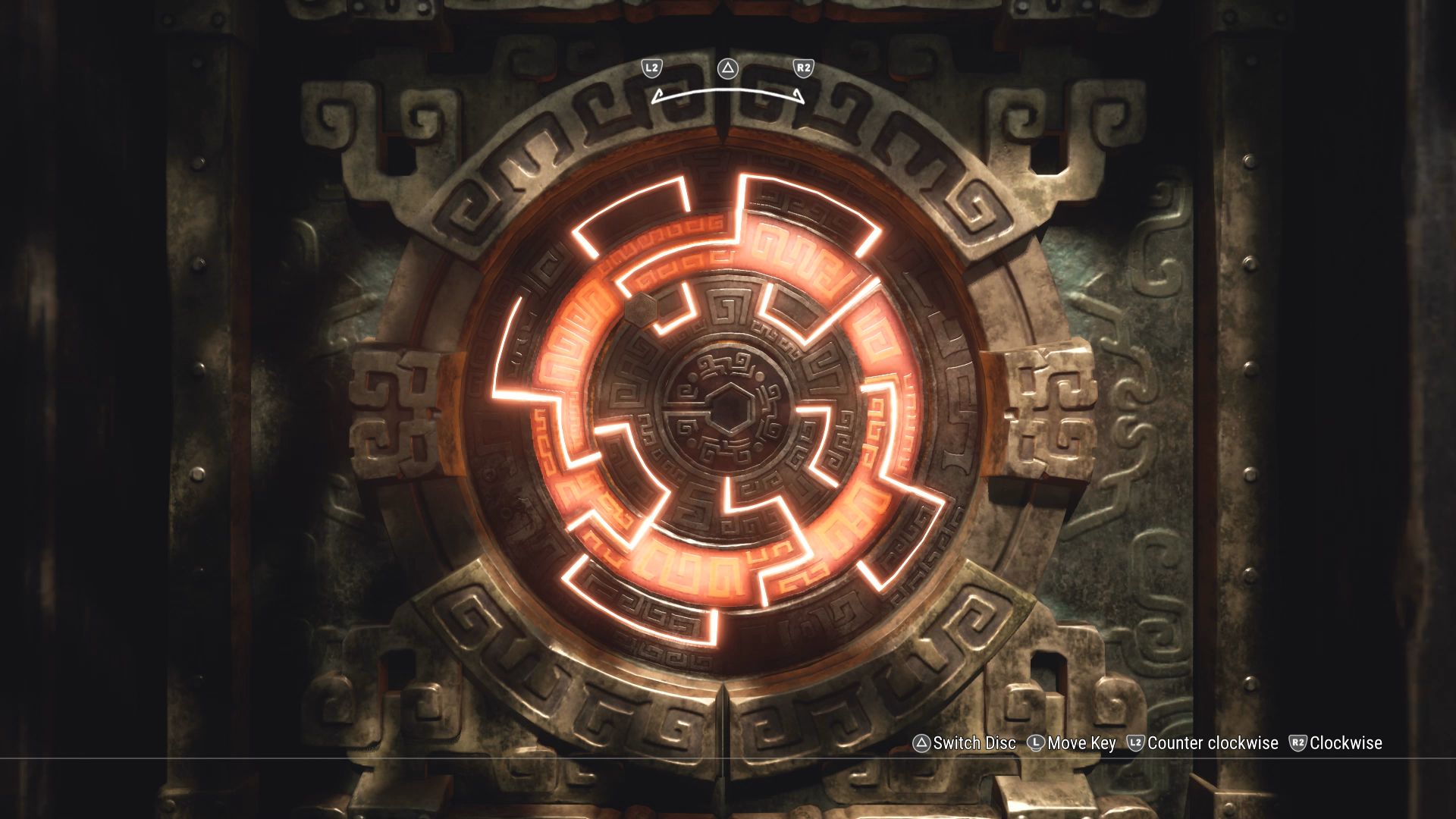 This felt hard as hell. Too bad not much of those are in the game.

What else is here? Game features few mini-games such as chess. Chess was cool, you need to line 3 dots and collect as much opponent ones you can to prevent him from doing that. There are special figures won by beating the chess players around the world – which is also one long side-quest.

Puzzles are hard as hell! Haha, I lost 20 minutes on the first puzzle in the game. The rest of them were easier, sometimes boring (pushing stone blocks takes like half of minute and you need to move them a lot), but overall not bad.

The rest of the side content is very generic and mostly you will fetch some things/kill them. One is great, it leads to DOMO studio area where developers left some easter eggs for you. I don’t honestly remember any other quest apart from this I mentioned. Bad, terrible side-quest content.

Variety of monster types is also not the best. Considering the game is 20 hours long (tops), I guess it’s not so bad. 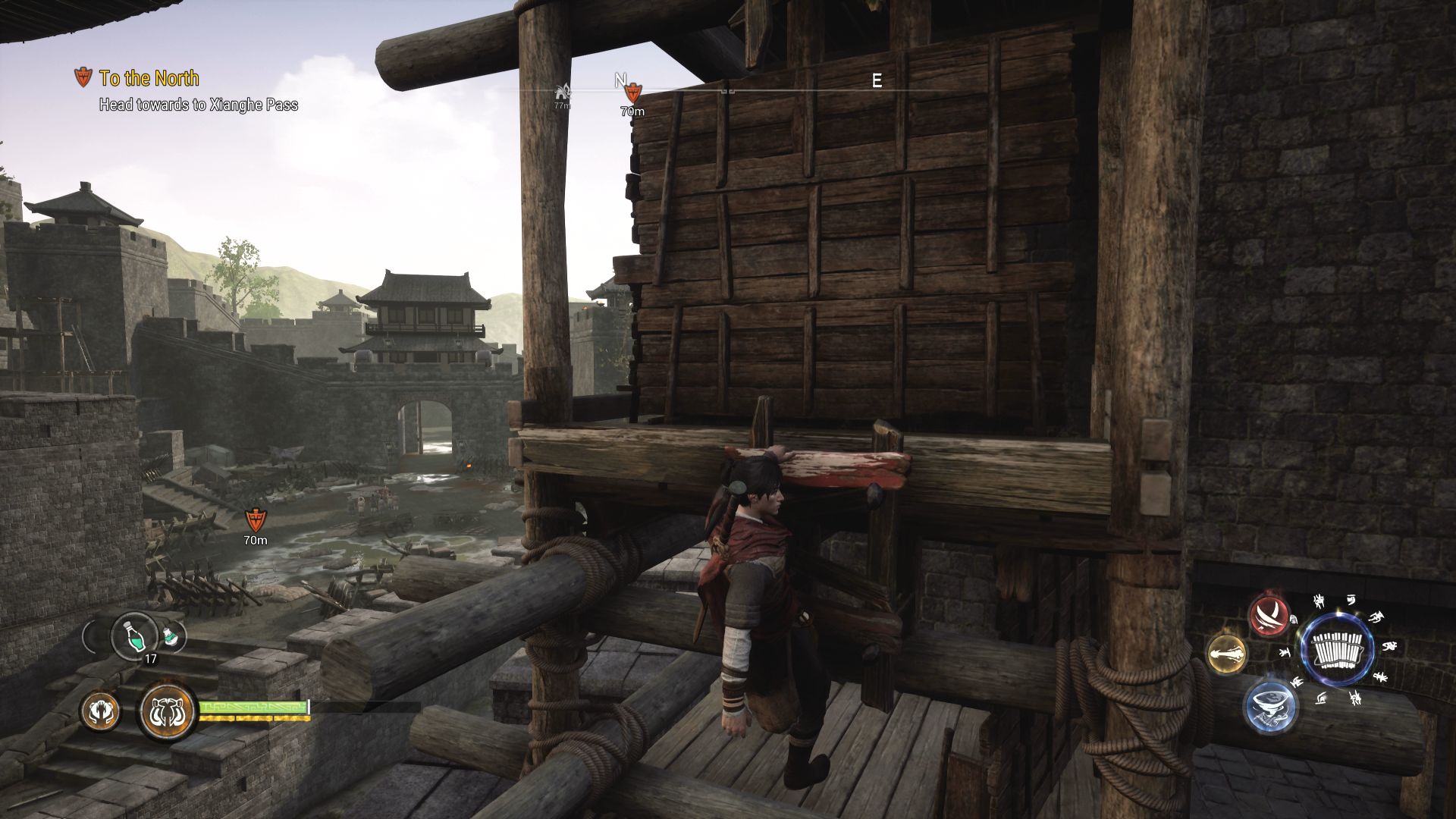 The platforming parts are straightforward, you cannot die and they feel clunky to say the least. Some views are cool though (not this one).

I would advise you to wait for the western release, by then they will polish some of the technical problems. It will also be easier to follow the conversations when you travel – I had to read the titles as I don’t understand the Chinese language.

The rest is standard. This is an action RPG with shallow RPG elements, mediocre storytelling and a bit shallow characters, but as a package I felt something and enjoyed my time with it. Don’t expect anything more than that.

I would love to see more titles like this one; but I would also love to see more weapons, more skills, and more variety in every aspect really. That would go from decent to maybe great. Until then, Xuan-Yuan will be just another action RPG – solid for genre lovers.

"Decent action RPG with Chinese mythology, but mediocre in too many aspects."