"A grindy, punishing, yet satisfying experience from the brink of hell - Hades is probably the best rogue-like game there is; but it was my first in genre so I can't really say. I do have things to say though!" 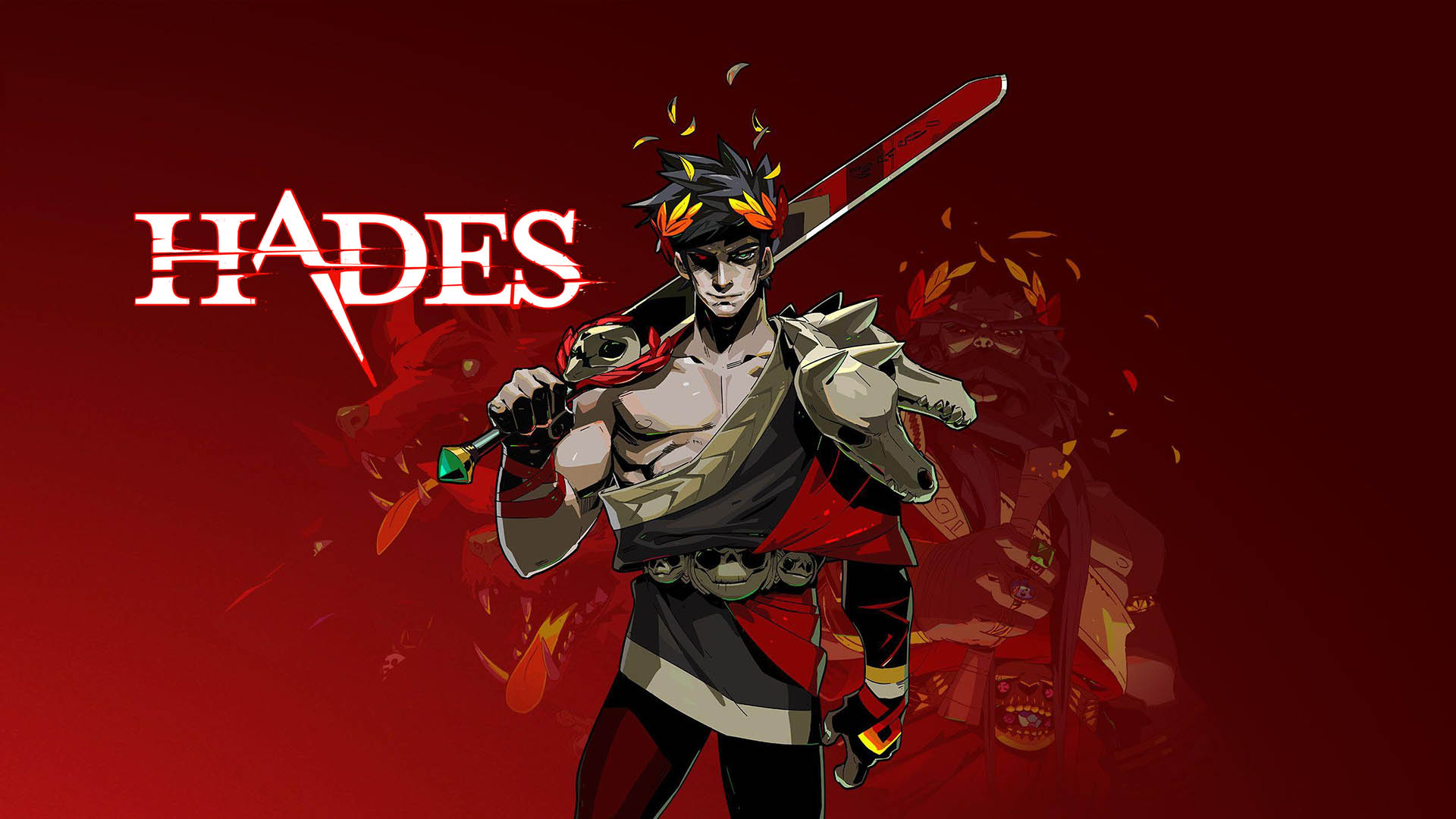 I decided to write a review for Hades, but I'm going to keep it short and on point. Maybe shorter reviews become a thing as I usually don’t have time to cover everything that I play (I still plan to write extra-long reviews, don’t worry!).

First time around, rouge-like genre is upon me. I was very patient for past year and finally we can play Hades on consoles. My PS5 experience for this Supergiant game was flawless, but I did have couple of crashes at the beginning, and 0 after the latest patch. Stable frame rates, fast loading times, 0 bugs – yep, it’s nice to play games that are complete. 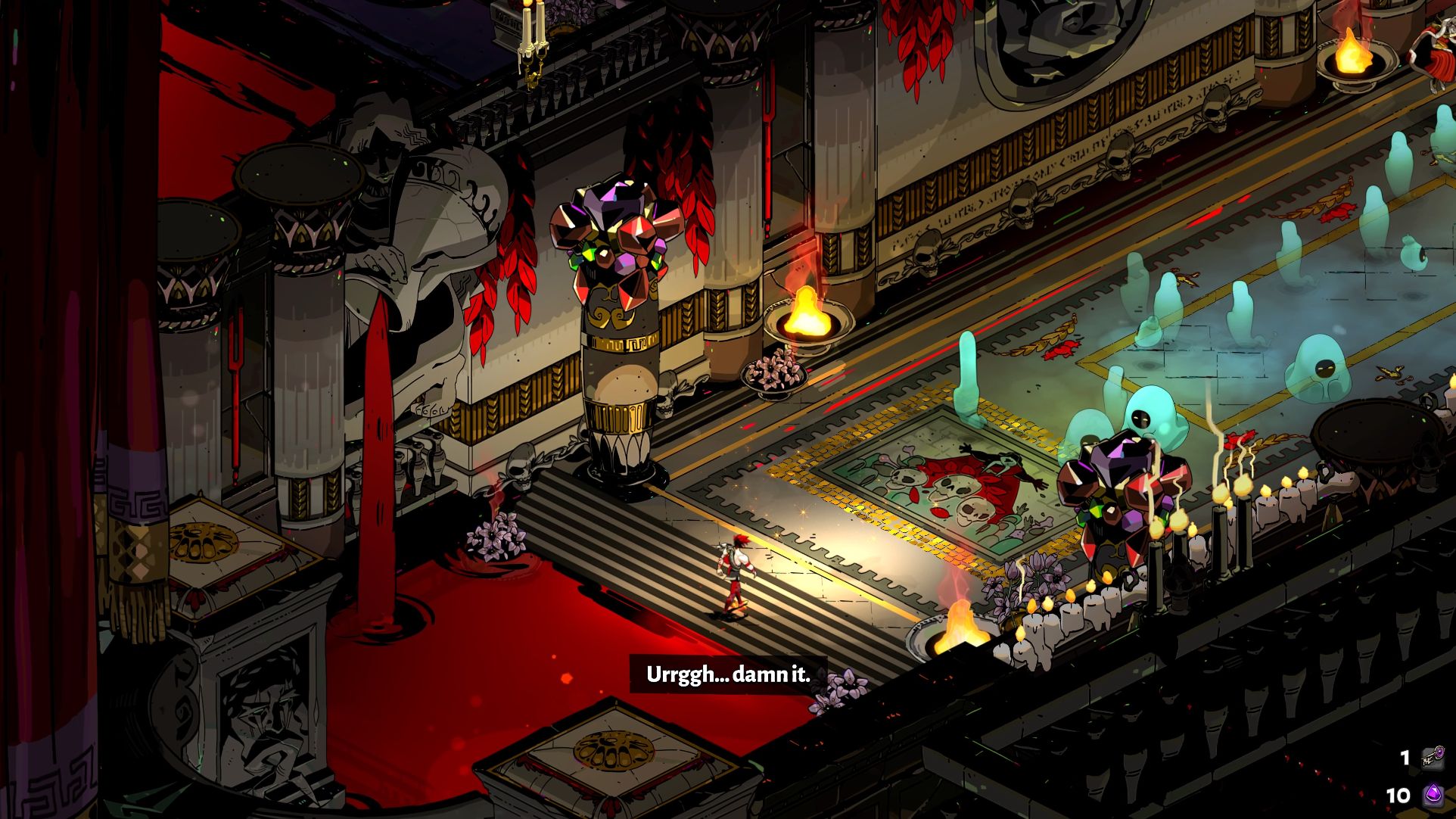 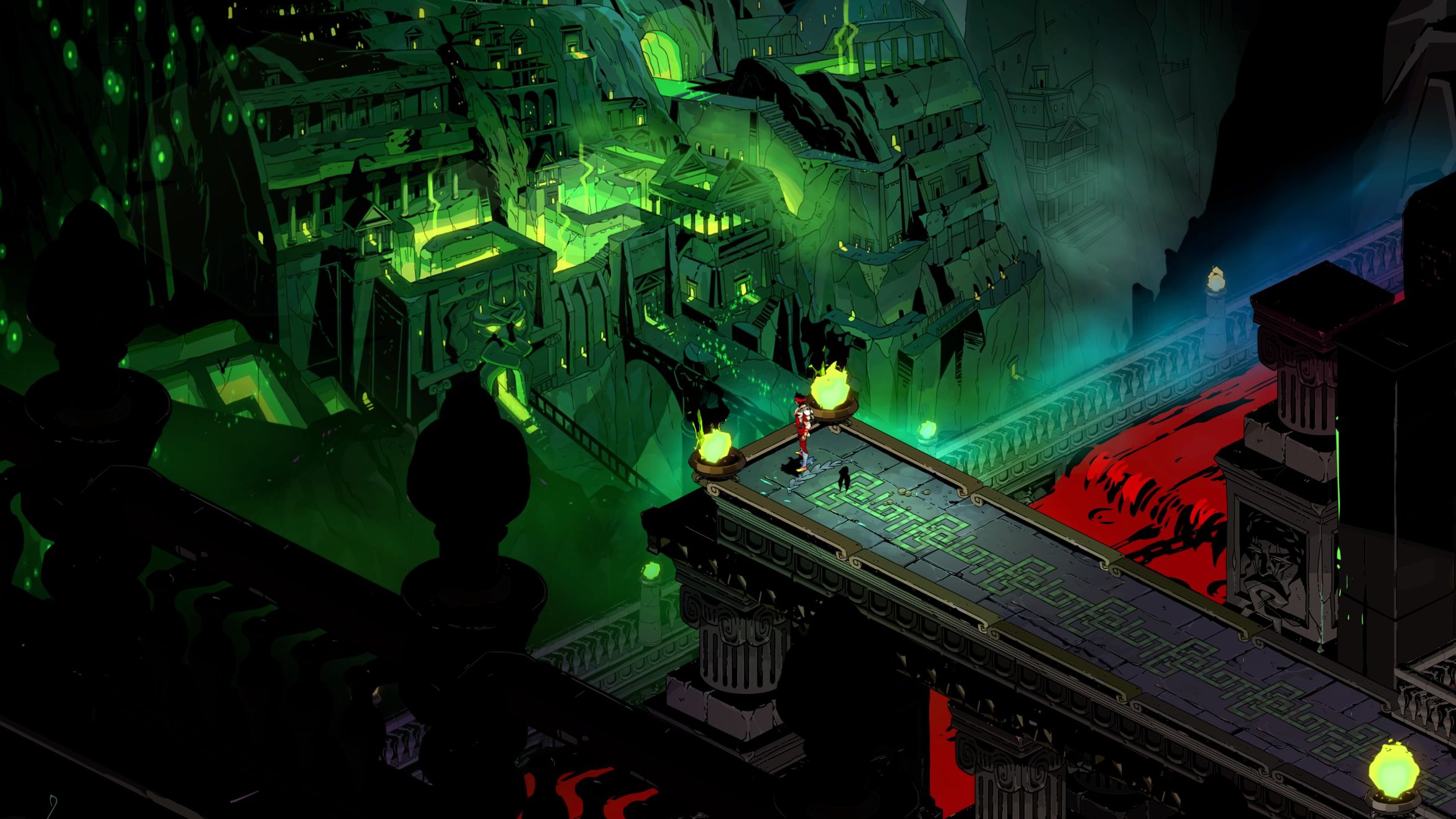 The first line says it all, and well, the view is what will calm you down (not at all)

I can really explain this game with a few sentences. You constantly try to progress through the dungeon more and more as you grow stronger, collect new weapons, perks, and reveal story bit by bit - By dying and repeating the previous sentence. The end.

Hades is the God of the underworld, and hell is where you will spend your time. You play as his son Zagreus, while finding many connections with the Greek mythology adjusted to fit the game and its concept. I really loved the idea conceptually, how all dialogues changes when you die and resurrect back in the base, how well the characters are bonded and blended into the story, how Hades always pushes you around and gets on your nerves… It fantastic how dynamic something that is so simple becomes. I must give them credits for that. The lines and characters are also very well written, and in 60+ hours I almost never experienced the same dialogues (although I would love to have some private time with Mageara again).

On the other hand, I found the story weak. Zagreus’ escape from clutches and chores of his father is somewhat interesting, but… Weak in a way that you know exactly what you’re looking for and how will it unfold. The worst thing about it is that you need to grind for so long to unravel that story, and everything about that is below average. I don’t care what happens with characters in this game after 30 escape runs (you escape from hell, thus calling these dungeon-leave attempts “escape runs”). I just don’t care; it was way to grindy to justify the story and what it can offer. If you find the concept interesting, you will enjoy, otherwise, forget about the story. 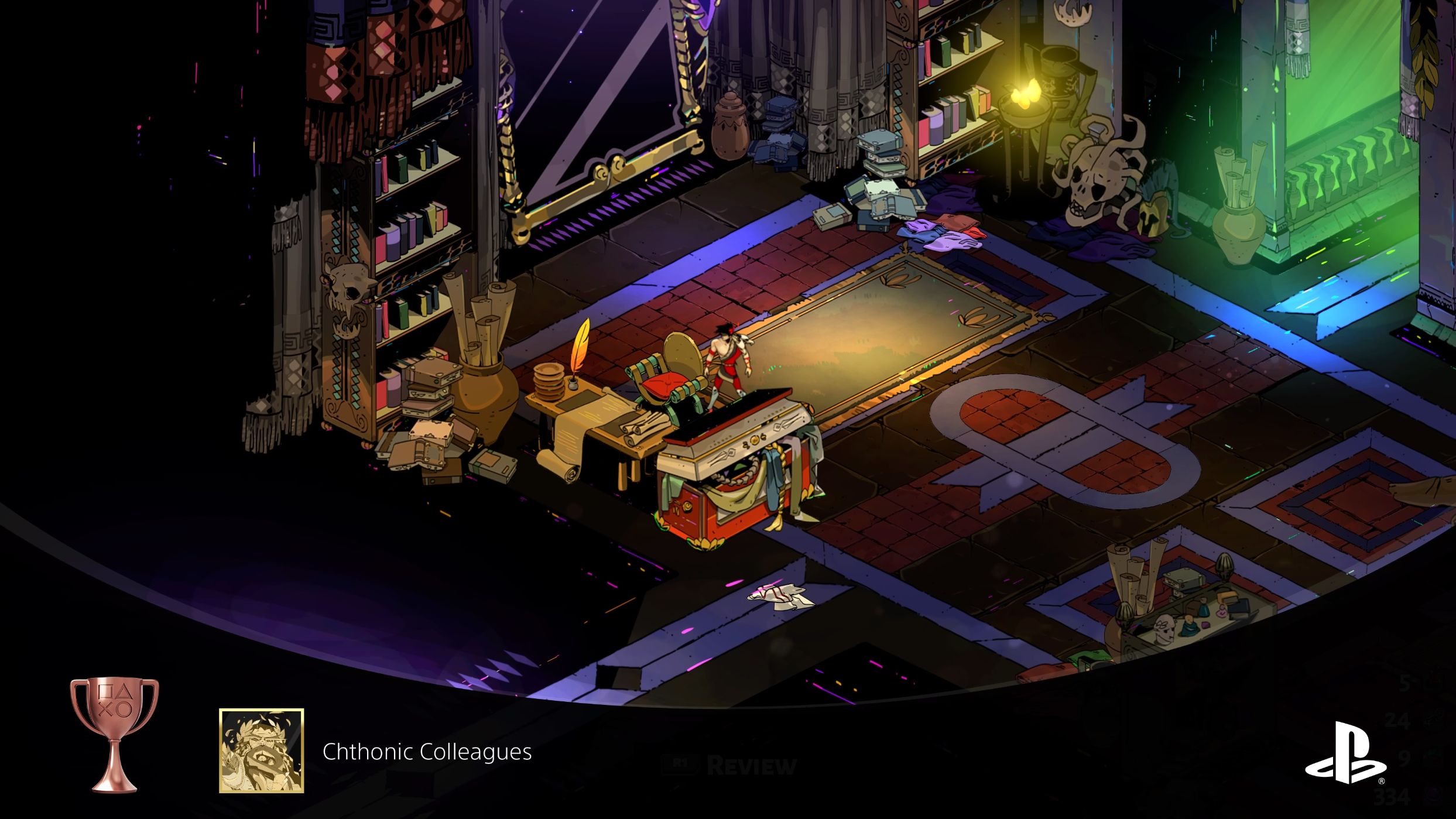 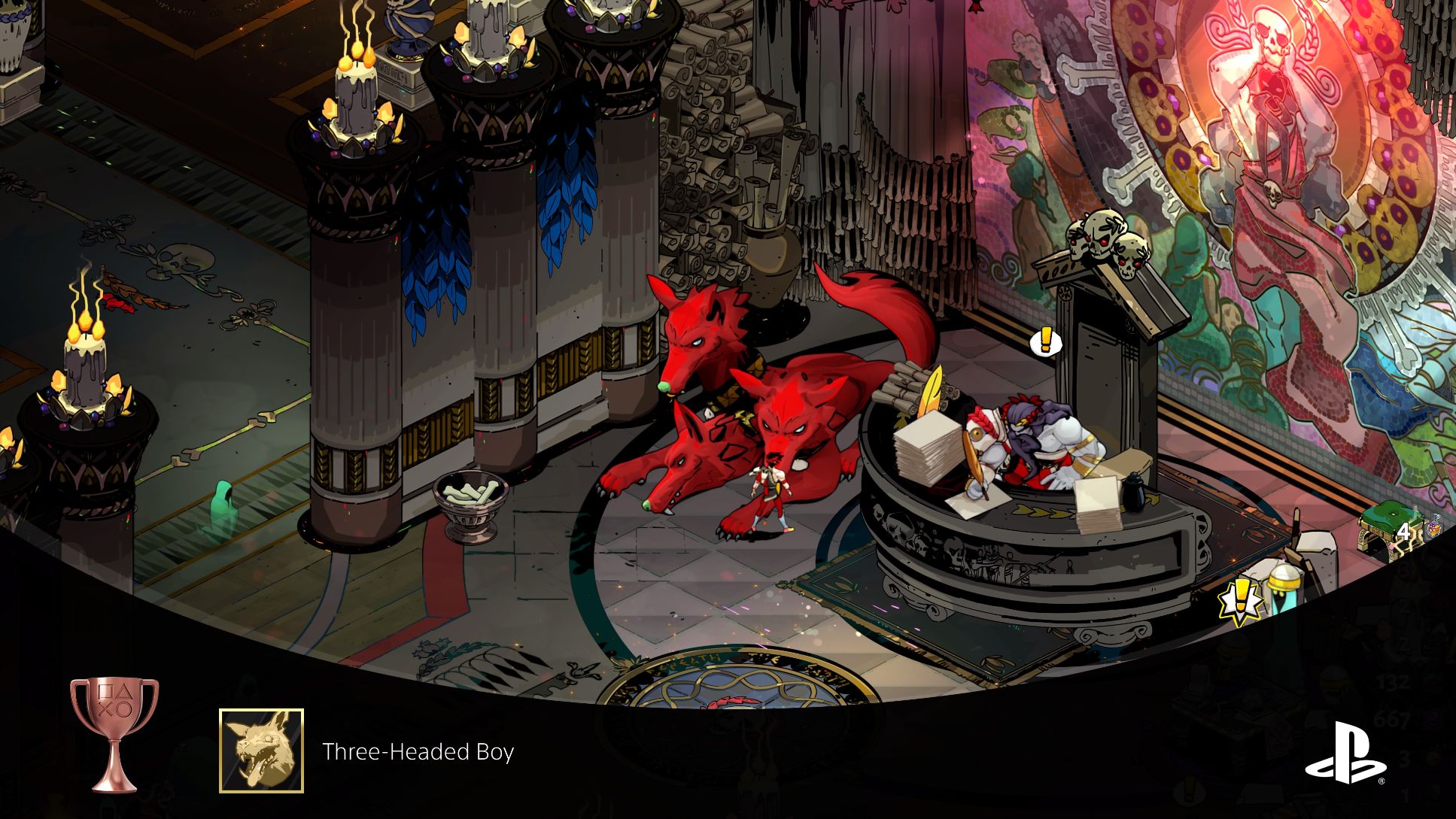 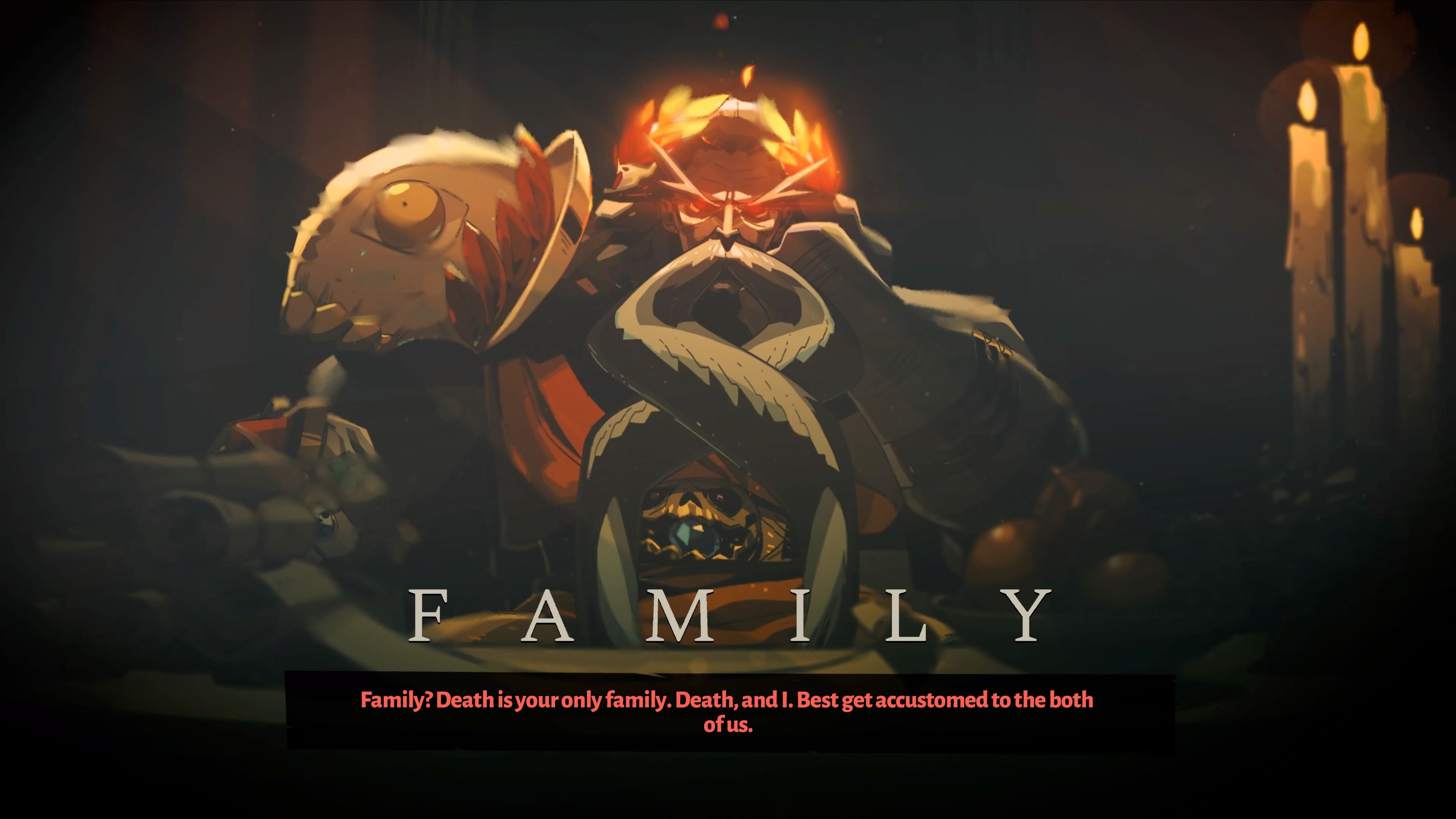 You can upgrade your room, skills (buffs) on the mirror, and you can solve different Prophecies to collect different rewards to progress faster. Meanwhile, there is a dog to pet, father to ignore and some dying in between.

When we talk about genre this game is, we can then say the story will not “weight” like for example its gameplay. It’s a game where you die and get stronger, and then you progress inch by inch. That means you will look at the same rooms, same enemies, listen to the same music and probably you will use the same strategy to survive if that work against you not being dead.

The gameplay is what’s great. 6 weapons, dozens of upgrade choices, boons through the dungeons (boons are random, which is the thing I dislike) and later even additional challenges; well, kudos for that! The gameplay is so much fun, I felt like it was very different each time I was using different weapons and upgrades, so it almost never bored me, right until the completion of the main story… Still, I disliked the design, all the rooms are similar, which means 50 hours of the same 4 floors with a small room design variations. If you prefer different arrangement of your locations, do not play this game.

Raising your bond with Gods who aids you through dungeons you get better boons and you can become seriously overpowered. The problem is the RNG; which means you will be weak little Zagreus who always dies in such circumstances. More about RNG later! I want more of the fixed RPG parts, and less RNG ones. 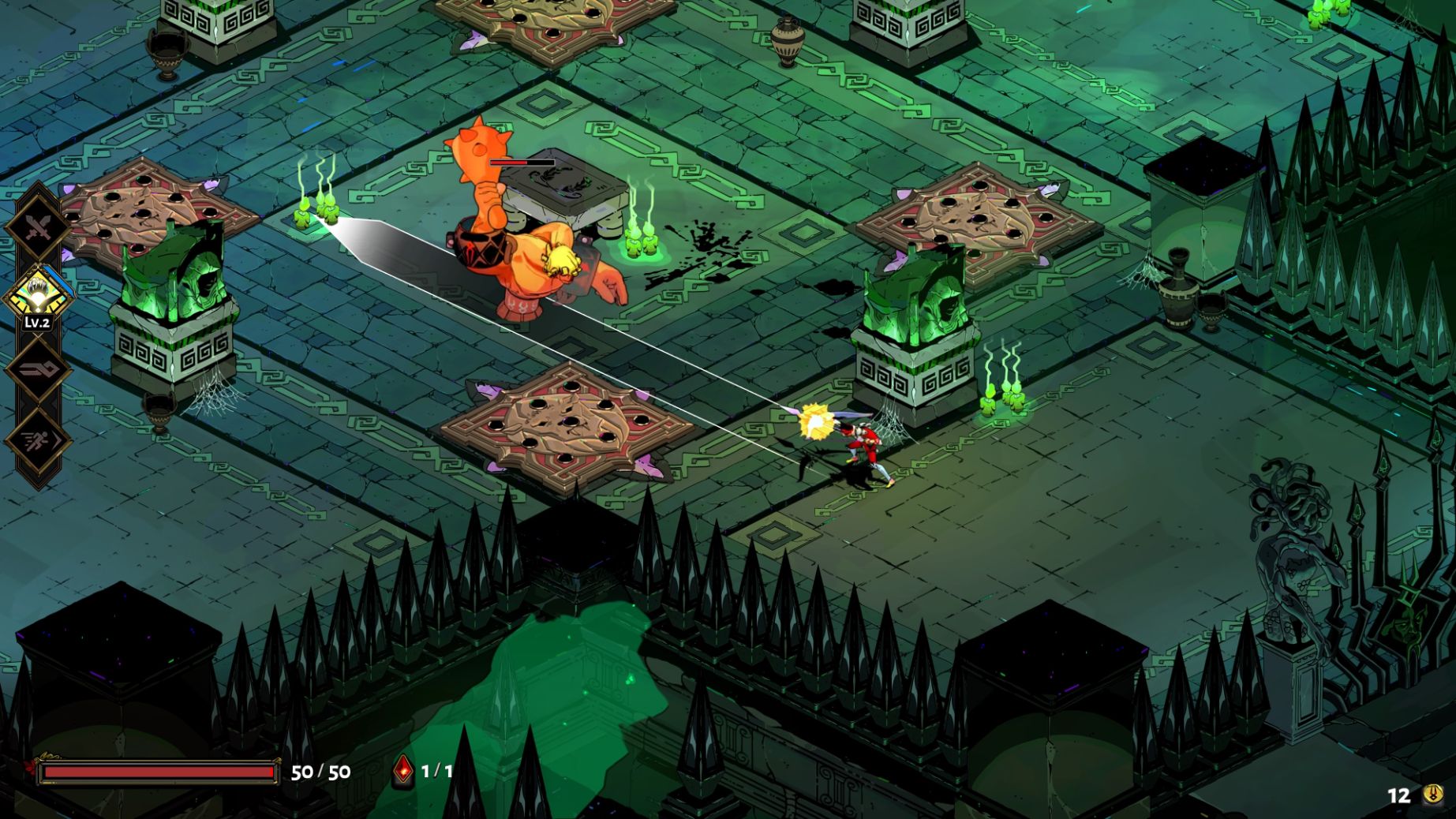 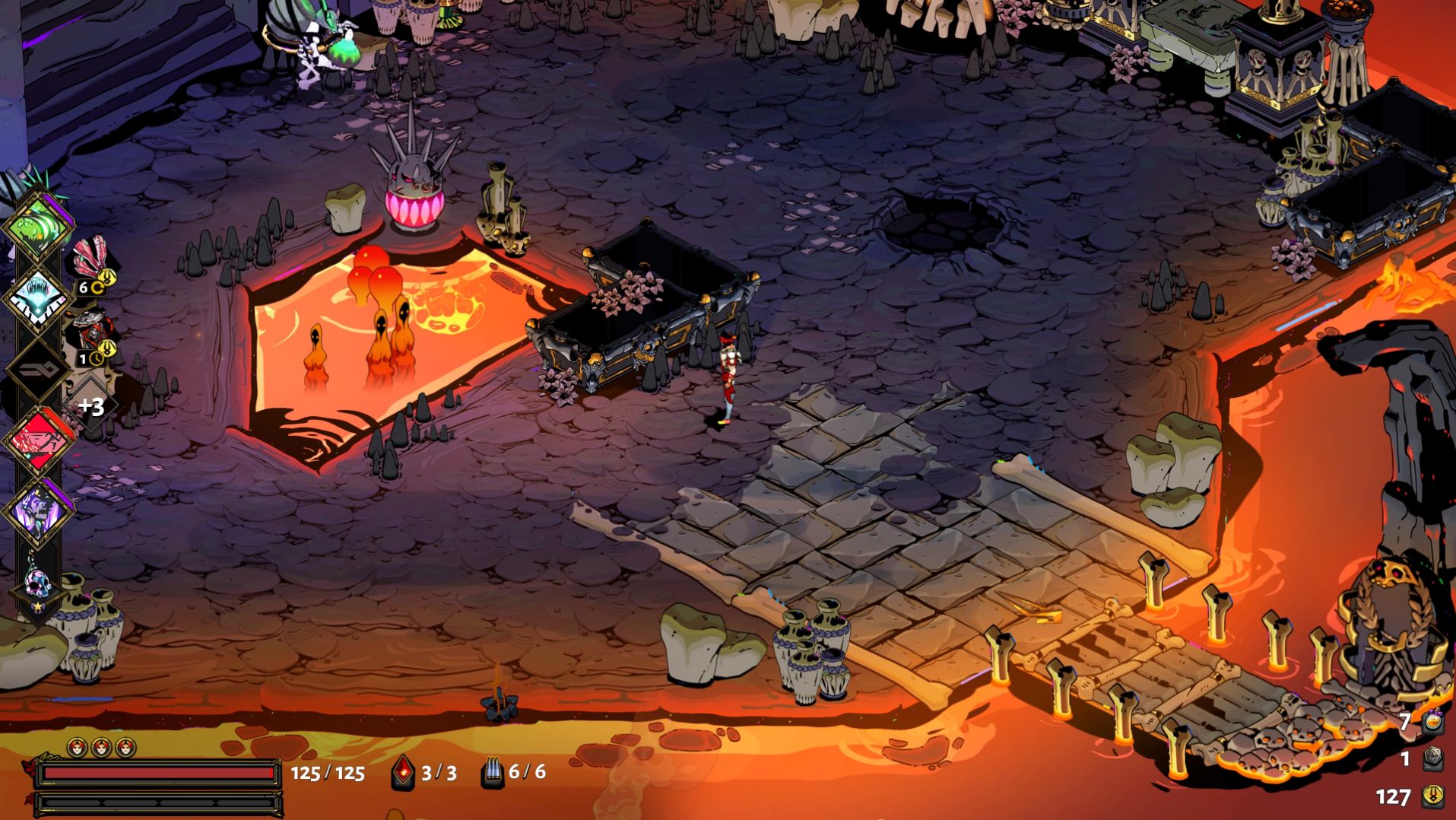 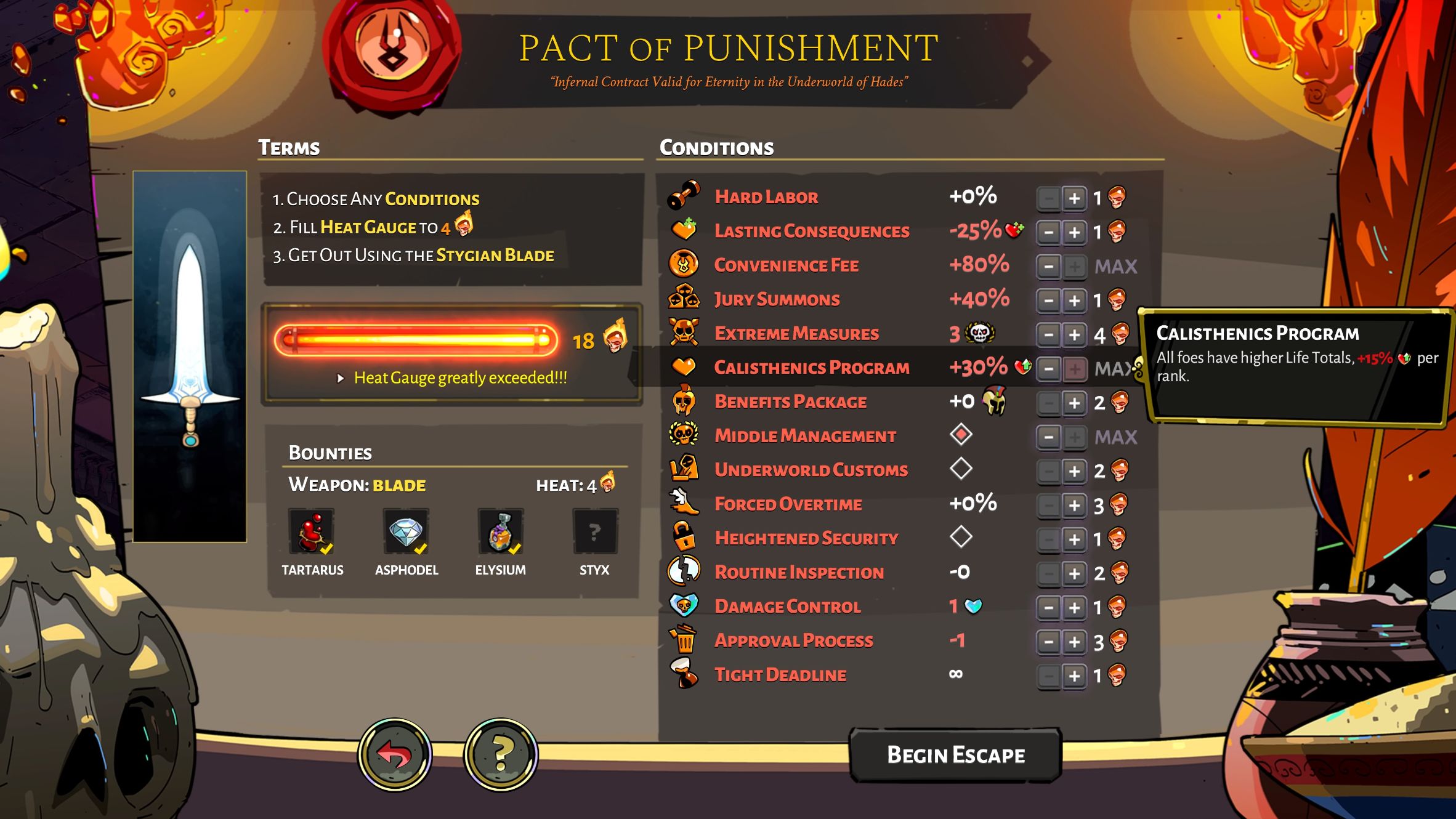 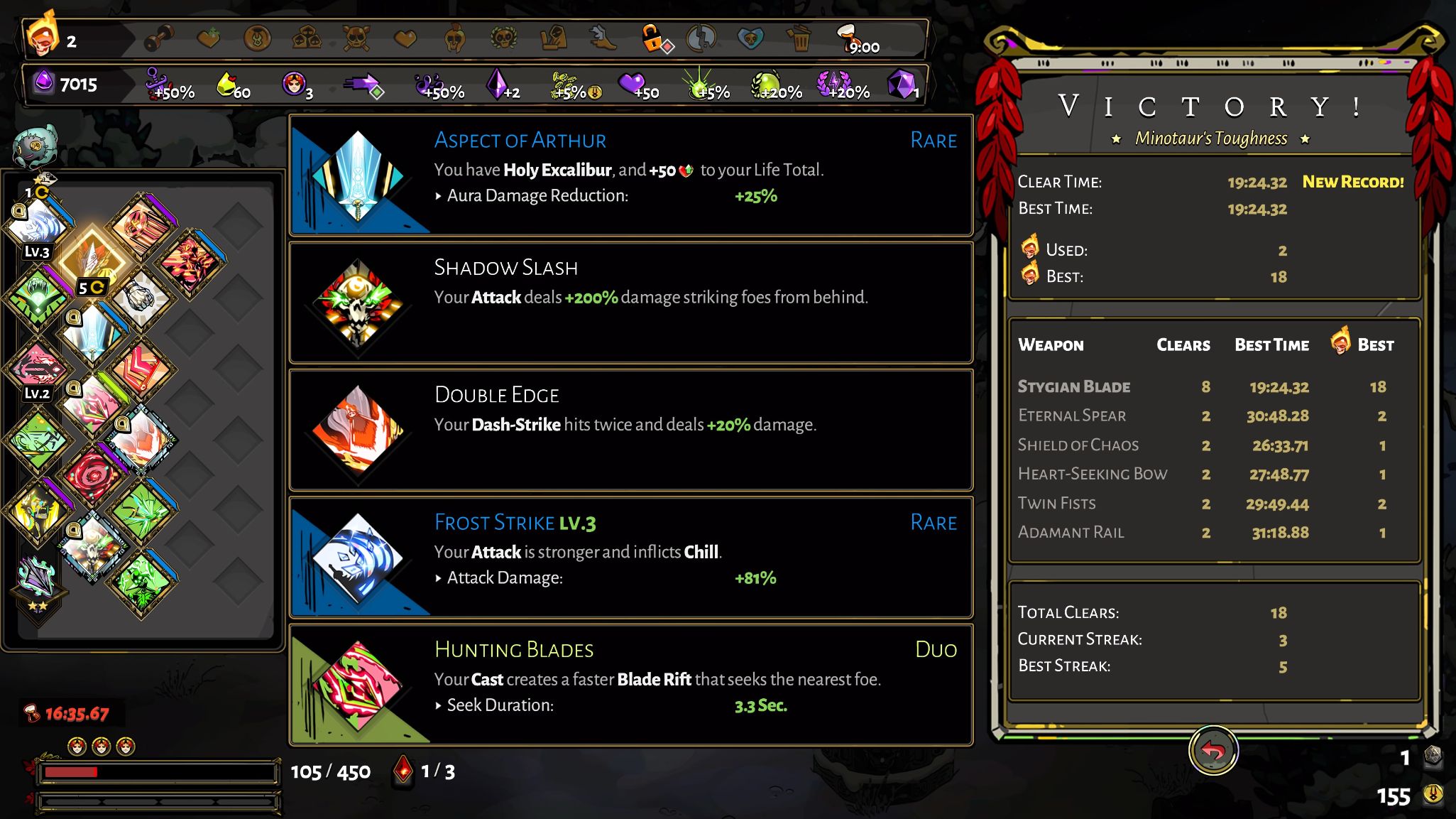 Such a lovely cartoon-ish style, but if you saw all pictures in this review, you already know how most of the game looks like. Dashing is great, loved the different appraches with different weapons and boons. You will start becoming strong, don't lose your hope, and if you want the challenge, Pact of Punishment is your "friend".

Talking to Gods progress their storylines, awarding them with Nectar does the same. RNG on the line: “Hello Sir, we would like to make your story RNG.” To get some dialogue option can sometimes be a real chore. You will need to talk and talk and talk and die and die and die so many times. Not interesting. When you want to collect some weapons, finish the challenges, or progress some story – Oh my God, how I was frustrated for so many times… Who the hell though RNG is fun in this segment?

I just say, ditch the side stuff and focus on the main story. Enjoy the gameplay and you will have a blast. As you finish the game for the first time you will unlock additional challenges that you can turn on to make your runs harder and different (like for example different boss fight arrangements), but after a while it’s not going to be fun no matter what they come up with. I was fed up with everything at the end, it was more than enough.

The good thing is also the music, but I disliked how the track always changes as you enter the next room, and you enter them every 40 seconds. There are some mind-blowing tracks, which unfortunately falls behind a bit because of the mentioned reasons. If you love the songs that Gods perform for you, sit back and relax, don’t just run through. 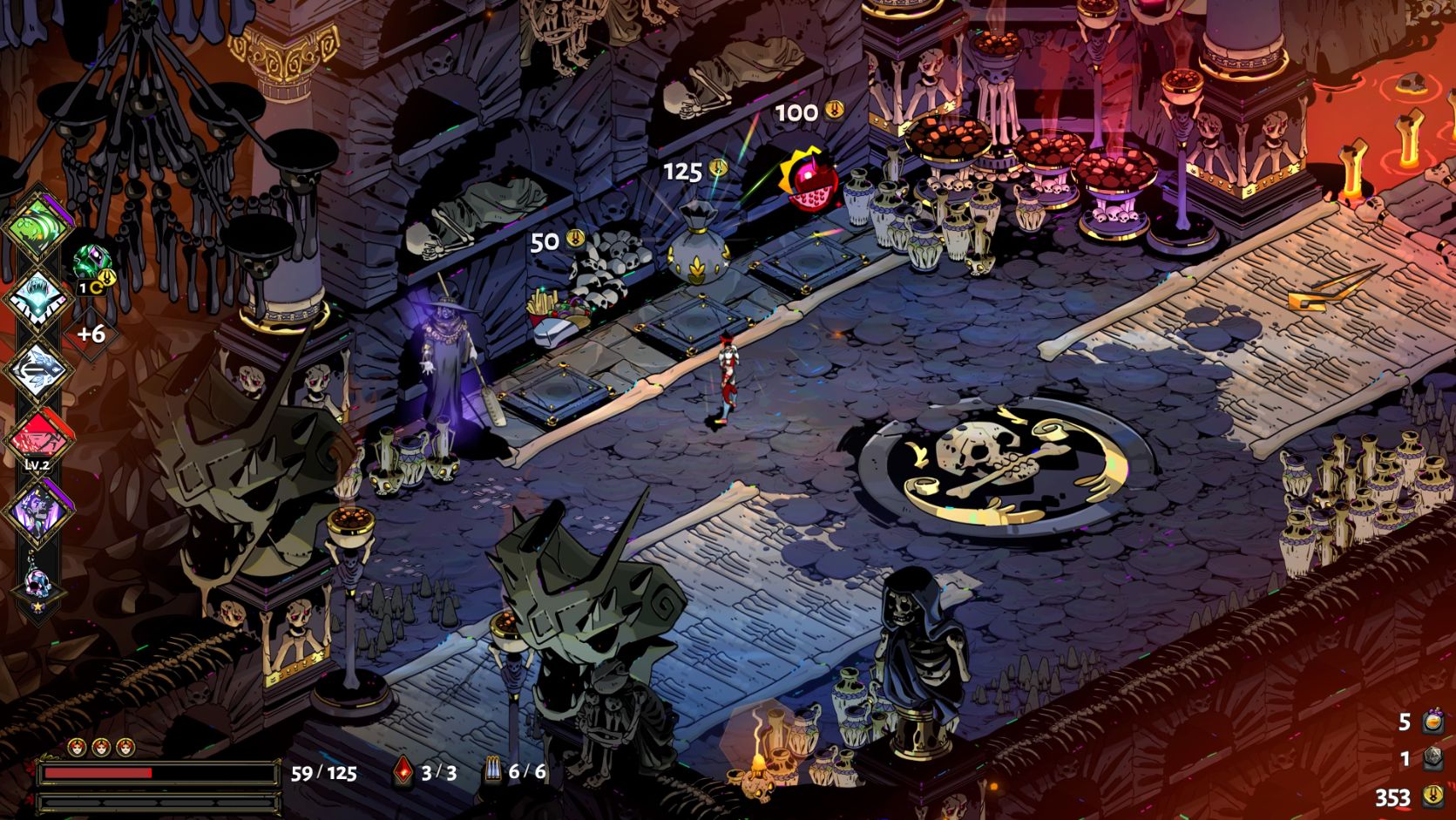 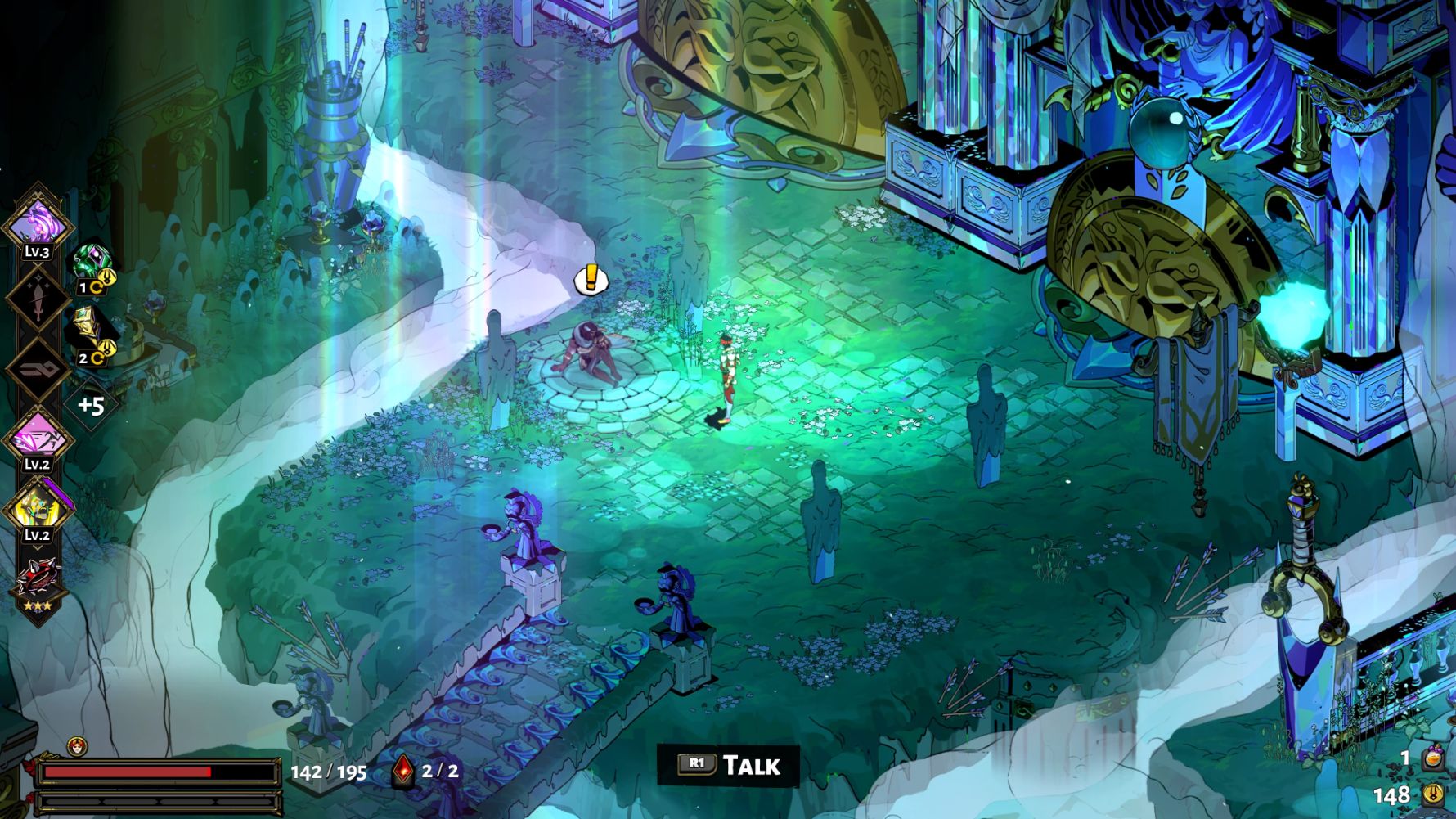 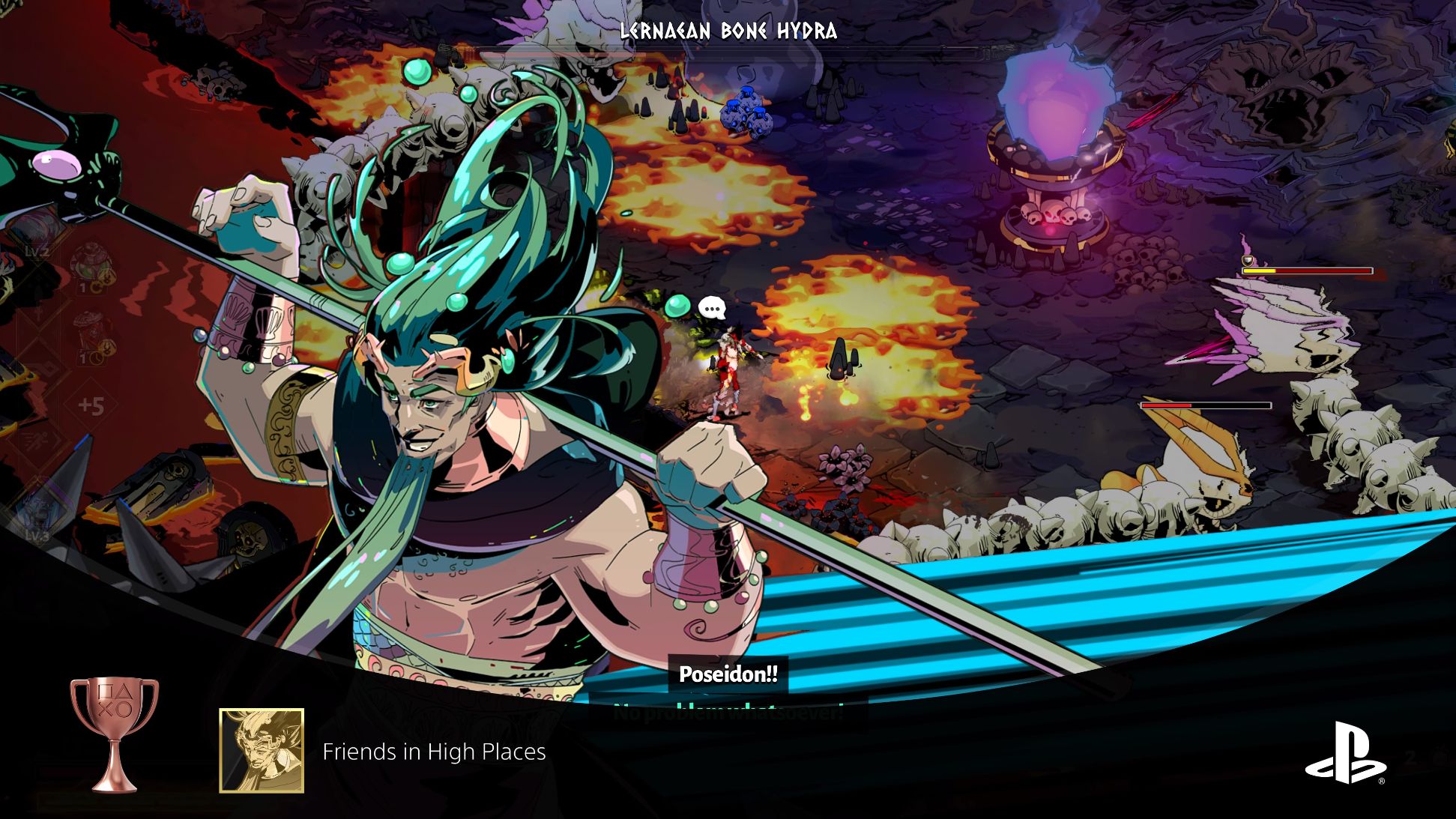 The best character ever, Charon (first picture). He always answers with "Mraaaagh..." and stuff like that, and yet he says it all. You can meet few Gods on your way out and even solve their questlines to unlock their buffs. Everyone's a friend (almost).

I don’t know, I’m just not for this genre, I guess. I don’t see the 90+ potential here. I mean, I do, if we agree that focus here is the gameplay, concept and not the story quality plus diversity when it comes to design. I always like to compare games, and when I think Persona 5, nothing comes even close in some segments.

At the end of the day, Hades is a hard, fun, great experience that many of you will probably cherish. The core of the game is strong, like you will also become after 30 hours. It’s punishing, but fun. It’s hard but makes sense. It gives you so many choices with weapons and styles, no one can deny that part. It’s simple, but complex! (But also, simple!) It’s… Not the best I’ve played, but I had my share of fun. Don’t force completing everything is you feel the burden of boredom.

After completing everything there is, I’m fed up with Hades and I don’t want to play it ever again. I will grade it in comparison to other games when it comes to story and such, so you might want to add some points to get to more critically acclaimed ranking. For me, it was not 90+ quality because of the many mentioned reasons. The reason I never stopped is to defy Hades – he once said: “What, are you going to quit now?” No father, I’m going to rip your eyes through your ass, which is exactly what I did for the next 50 times or so. Good times.

"Don't you just want to kick your father in the balls from time to time? If you can't in real life, do it here."