"Technically ruined remake makes an entrance through our doors. Still lovely but at the same time frustrating as hell" 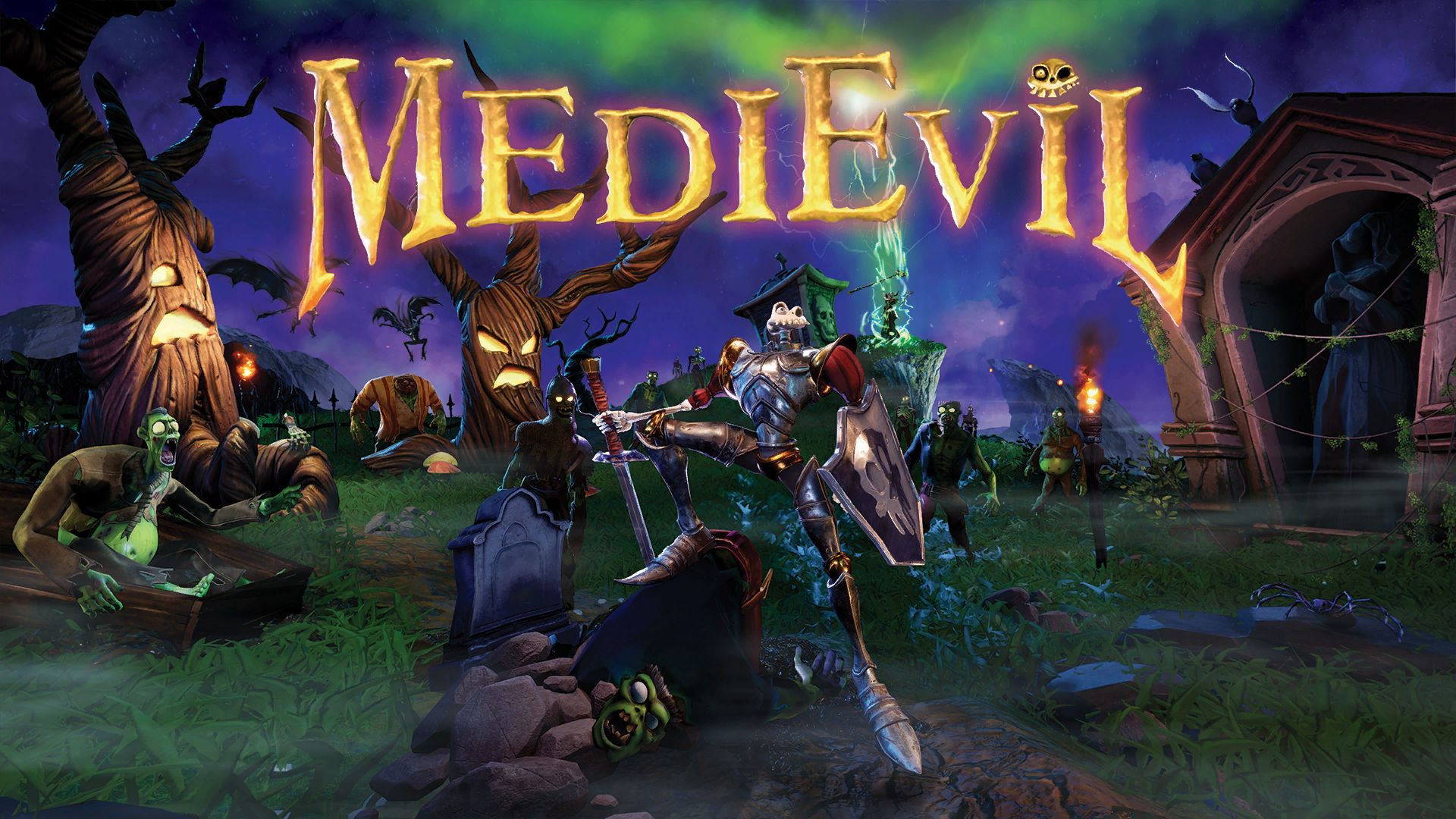 Once upon a time SCE Studio Cambridge – today known as Guerrilla Cambridge, released MediEvil. Among that, you probably played Frogger, Primal, even LittleBigPlanet. It was just a matter of time when some remake will be announced and done.

Other Ocean Interactive is fairly unknown studio for me. I see that MediEvil is one of their biggest project so far. Its funny, they say they have Quality Assurance department. Nice. Just that, I would really want to ask them how do they test the game as this was glitch galore to play. But I suppose management is to blame, as always. More on this later.

Few fun facts and we can continue. Game is quite cheap; there are 2 editions: normal one and digital deluxe. Deluxe contains Super Armor (gold armor) from MediEvil 2, theme for PlayStation 4, digital art book, digital novel – story before this game called MediEvil: Fate's Arrow, as well as the soundtrack. Nice collection for diehard fans, I’ll give them that. 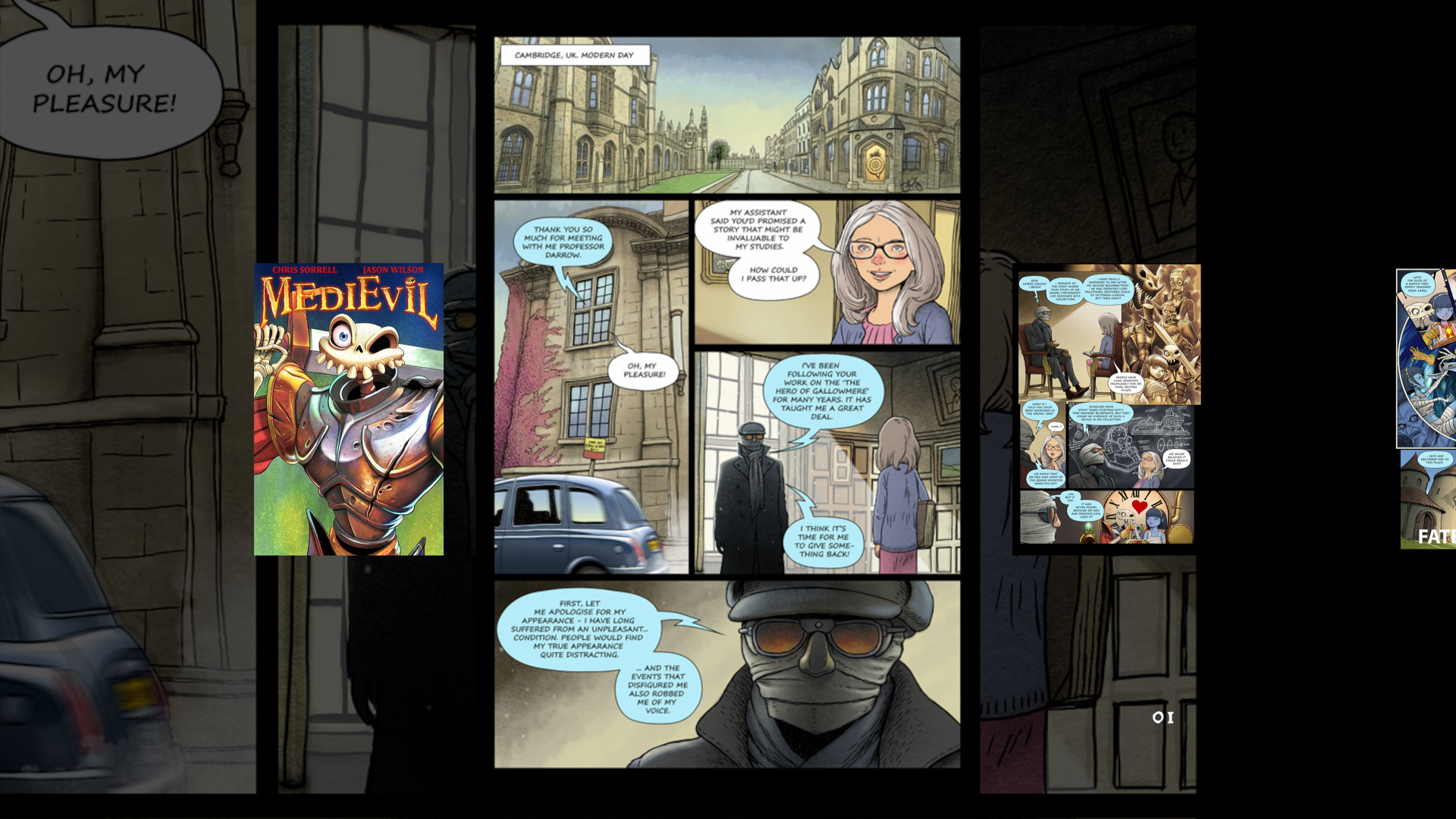 Nice little artbook novel you can get by buying Digital Deluxe edition.

Only positive thoughts emerge when I think of our skeleton boy in armor. As I kid, I know I was scared of the game and the setting, it was weird and stressful, but now fear is gone and I appreciate the whole game which is more than just pictures.

MediEvil is a comedy really. Legend says that Dan – our hero, lead king and Gollowmere army to victory and defeated evil witch Zarok. In reality, totally different story. Dan died first, he took the first arrow that was fired that day. But king decided to hide the truth and told the story with Dan as hero and Zarok as dead. That is not the case, Zarok is back after many years and he resurrects the undead army to obliterate whole kingdom, just one unexpected thing happened – Dan was accidently resurrected as well. We have a hero that is not even a hero in a mission to save the kingdom. Humour is top notch. I enjoyed Croatian subtitles, its rare that games even have them, so mostly I was playing with them and laughing so hard on some translations. 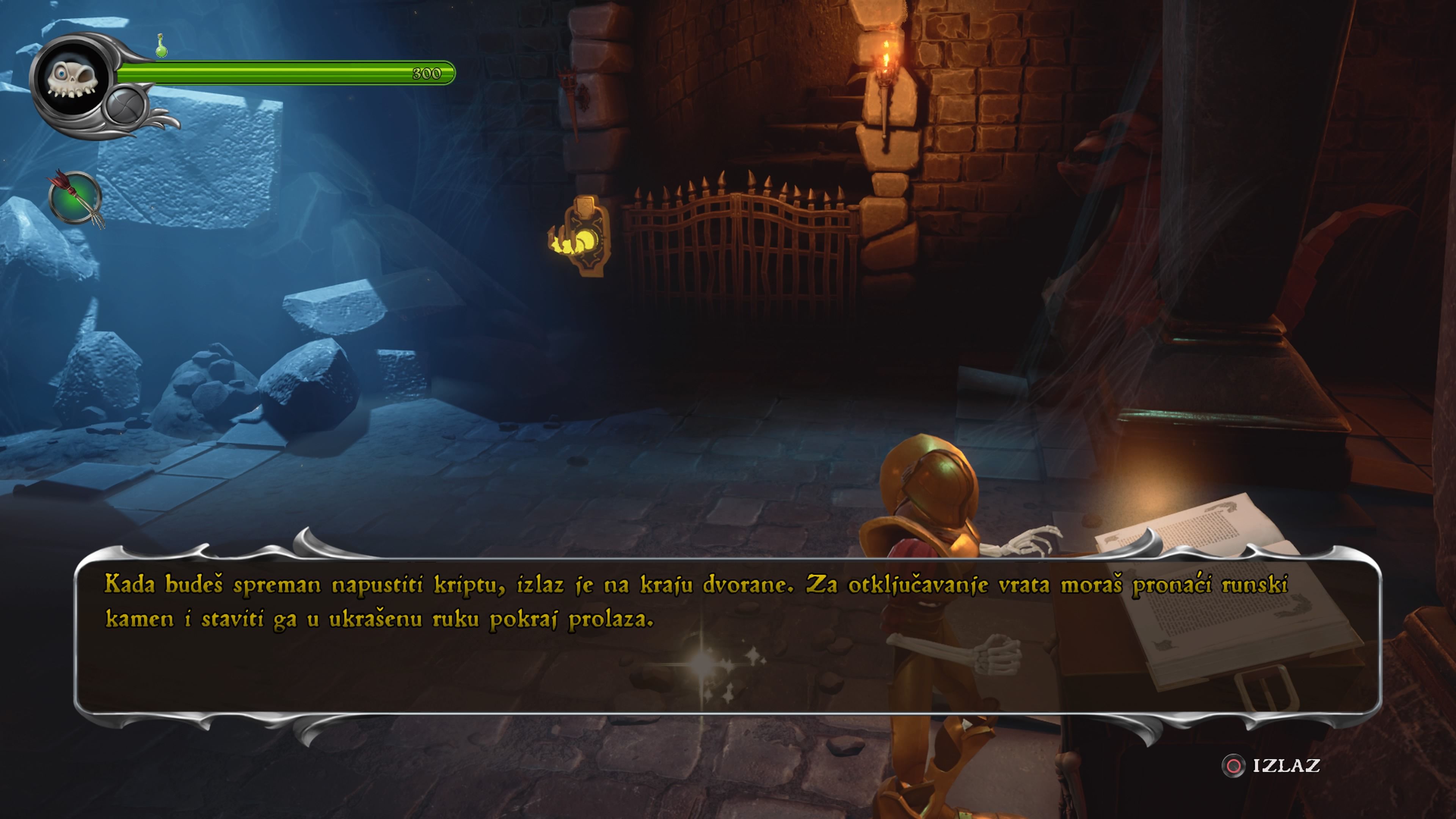 Dan's Crypt and the book of hints.

For sake of this remake they took all levels, put them in new engine and created some environment which was not present in original. Of course, they did whole new assets and everything. 21 long year passed, and it had to be done. Which is great, game is loyal to its father. But, just sometimes, you take the game, fix the stupid stuff, camera and glitches, and let us enjoy it even more without frustrations and weird stuff.

On the other hand, voice of Dan was once again done by Jason Wilson. They added narrator as well, while retaining the rest of audio and just remastered it. Soundtrack was done and recorded again by Prague Symphony Orchestra. 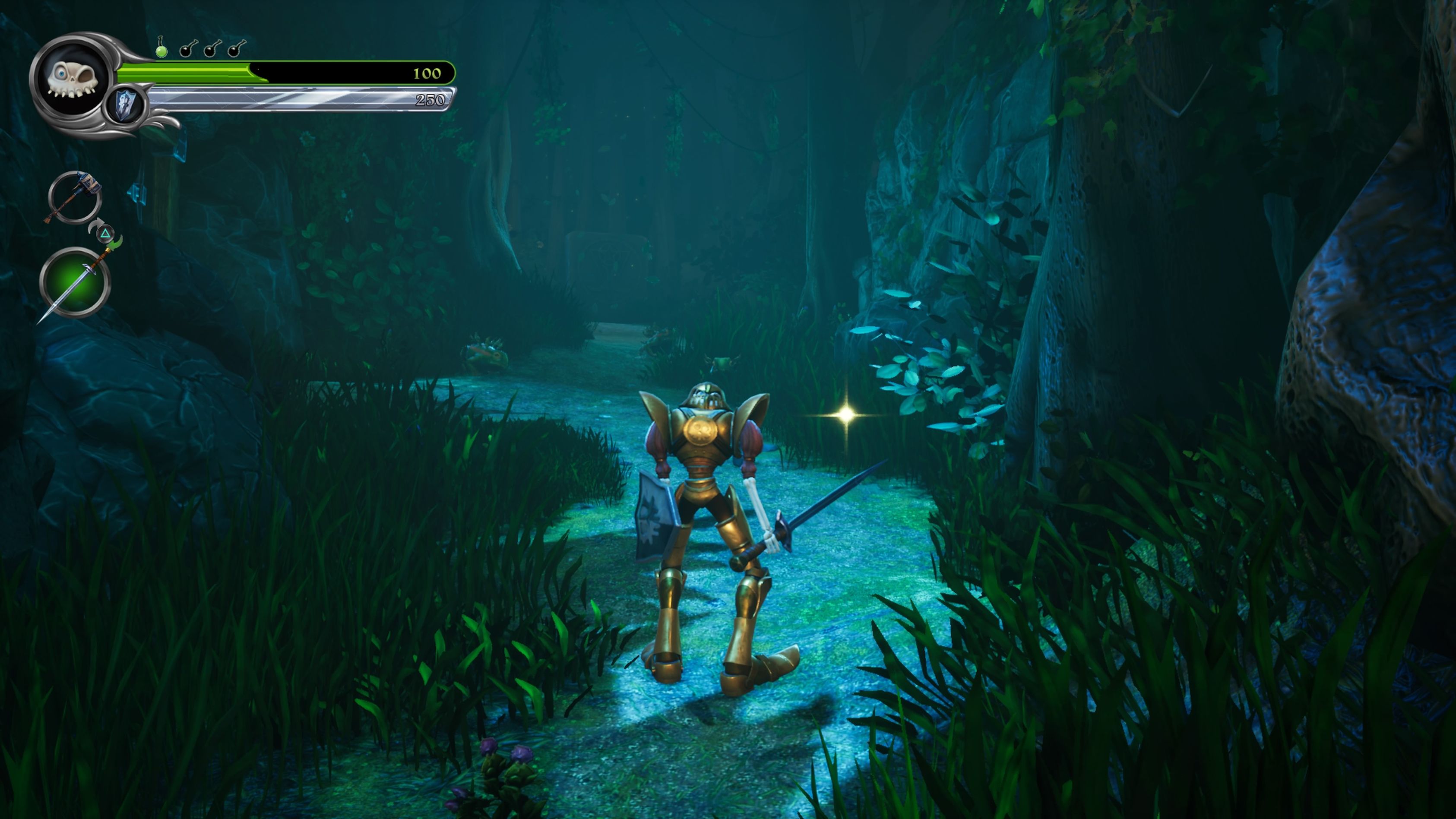 God I hate this level. The Enchanted Earth and shadow enemies there

Original had issues with camera, as we stated. Jumping was weird, it was hard to even see where you can end up or go. Remake never fixed those, it just extended it. Camera is mildly said a disaster, it just behaves on its own. On some part it is static and on some it just follows bosses so you can’t adjust as you see fit. Traveling through tunnels is like visiting hell. I had so much trouble with focusing where I want so that I can make that jump that in the end I just had to improvise.

Many times you will find Dan going through invisible walls by itself. It happens as you get out of some dungeon, he just walks straight by himself. This game seems like it plays by herself, with her own intelligence and free will. Even different view by holding certain button never helped me. 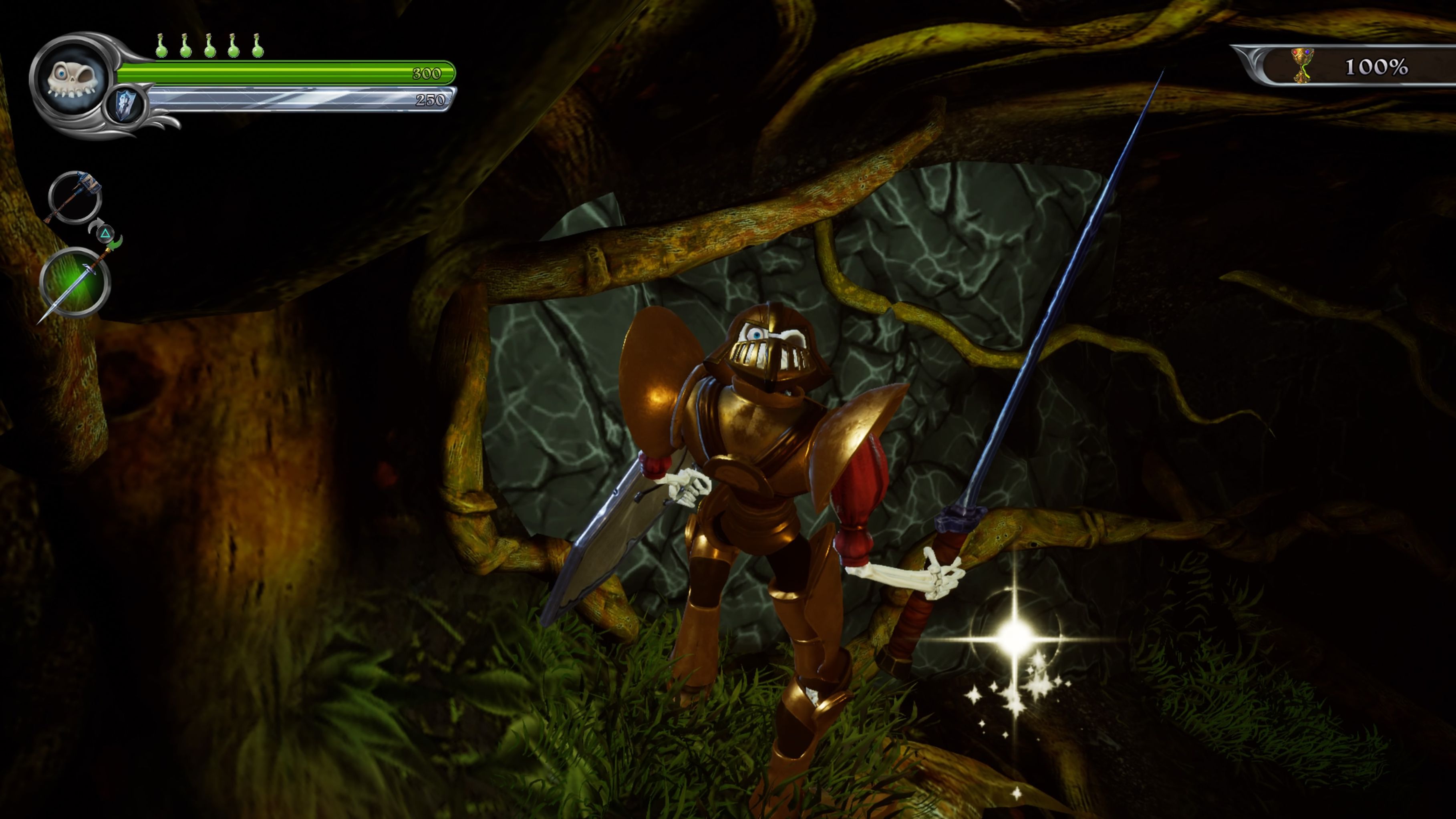 So, the camera is sexy in a way that is not what you want.

Nostalgia. Yes, present big time. That artwork, Tim Burton style. Beautiful nightmare. I still love how they game is loyal to original. They wanted us to experience it in same way. I did. If those technical issues weren’t present, I would enjoy staring at the screen every minute.

Dan is sloppy. Movements are, if that is possible, even worse they were in the first place. Response comes with like a delay, sluggish. Combine that with lousy camera - not the best first impression you can get. You start when you resurrect in your tomb. After initial tutorials you are ready to redeem yourself and chase Zarok, like hero from the legend.
MediEvil is an action adventure featuring some cool mechanics for time when it was out. I love them still. It’s a story in which are hero need to beat all levels (22 to be exact). On that road some puzzles awaits, some collecting as runes to unlock paths, life bottles that grants more health, health potions that will replenish your health and so on. You will also collect chalices which will end up in the Hall of Heroes where Dan will try to find his place. 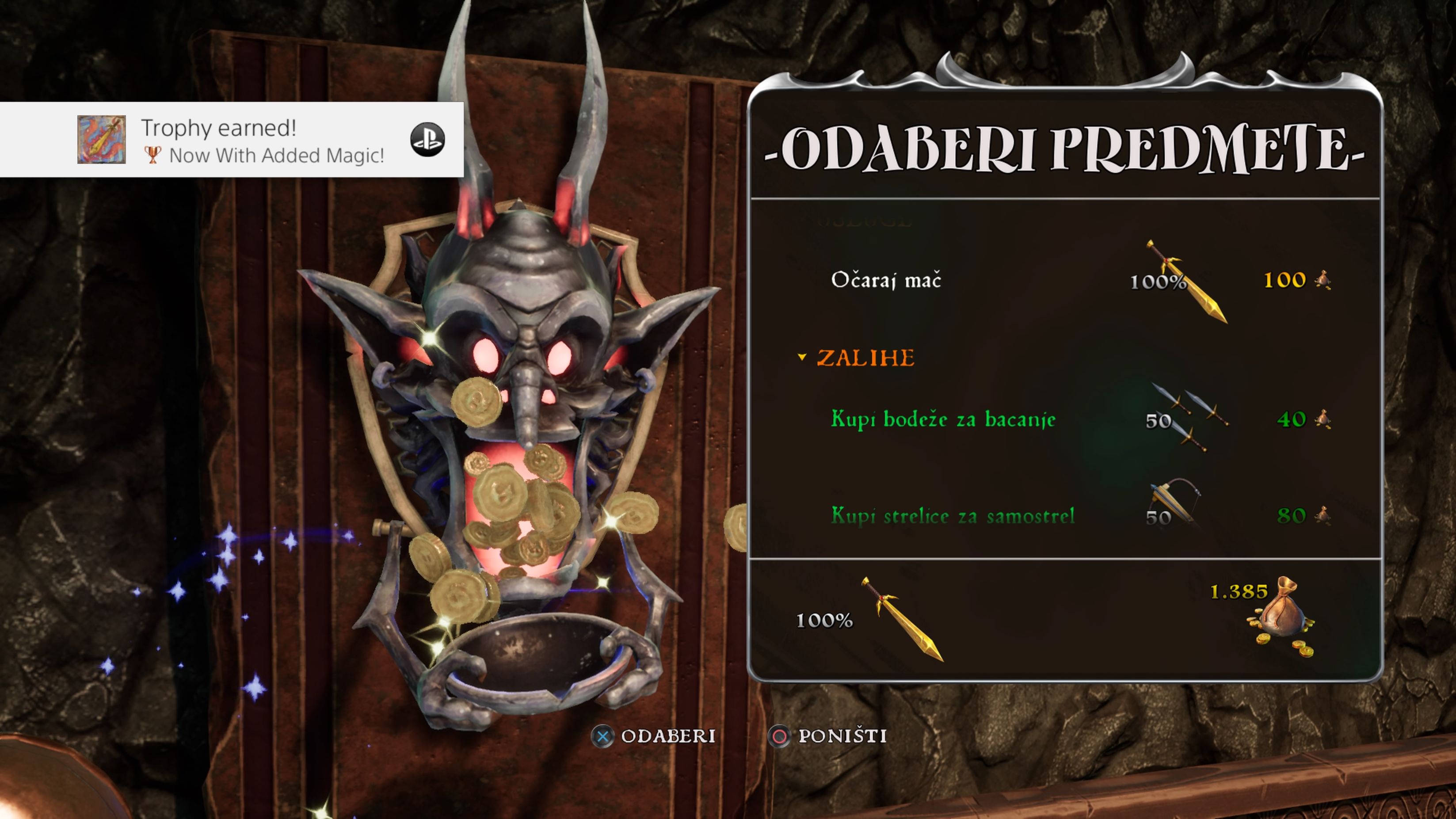 Your dearest merchant. Only thing worth buying are flame and magic arrows.

The game offers a map where you select your level. I hate the fact that it does not offer a list type of view where you can quickly select a level, but no, instead you need to travel all the way from the end to start if you want to replay some early level. Some are locked until you gather enough souls (by killing enemies) and pick up chalice when it materializes which happens at 100% - meaning when you kill enough enemies, save some people or collect fairies. Every level except start and end levels has one. Collect all to earn your place in Hall of Heroes.

Hall of Heroes is a hub in which you can find other hero statues, from the legend. Collecting chalices will trigger them to give you neat weapons and upgrades. That part is what I like in MediEvil, its fun using different weapons. Expect that every single character will mock you and make fun of you whenever they have the chance. Doesn’t matter as long as they provide us with good weapon arsenal. Most of them you will get here. Make sure to collect chalices and make Daniel famous and a hero.

I like the main concept of the game. Its fun collecting weapons and stuff and think how to solve some parts. There is even a secret level, which was also in original game. I just don’t remember occasional difficulty spikes there. Although easy, some levels will hit you hard. First example is Scarecrow Village, where scarecrows attack you like crazy. They hit so hard and there is not even a bounce them off approach like it was in original. Don’t know how this happened, some parts are just hard and frustrating.

On the other hand, boss fights are a piece of cake. Animations of boss fights are a bit modified, but in general mostly the same. They are way too easy if you ask me. I like the fact that all animations look like in-game graphics. Overall the graphics are not something to drop your jaw down. Its mediocre but considering the game weights 40GB I really wonder what happened. Some even look bad, with occasional resolution drops. Expect some frame drop in game as well. Nothing serious though. 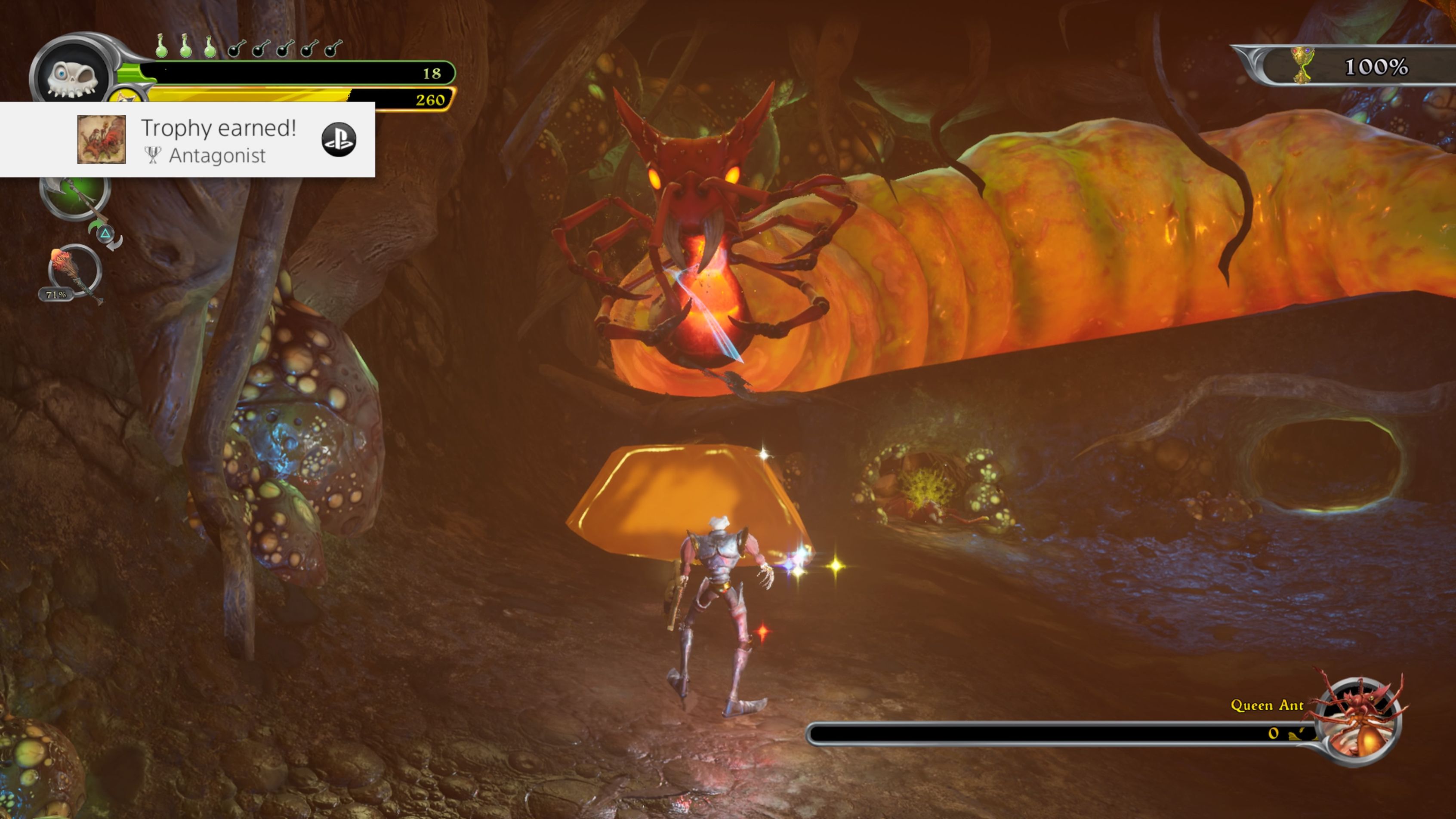 Do not let the bonus level skip you.

There is one addition to this edition – Lost Souls. When I hear that I think about Oninaki and how bad that game was. Not bad, just not satisfying. So, you need to release all souls from certain level and that will open opportunity to visit each level again and hear their request. Last part is to visit all levels again, and based on hint they gave you, do that task and finally release them. I hate the fact that you need to finish the level for it to count, so expect playing the whole game 3 times at least. That will extend our 8ish hours of play to around 15h. I personally don’t see any added value, it was partially fun but backtracking is never the best option. 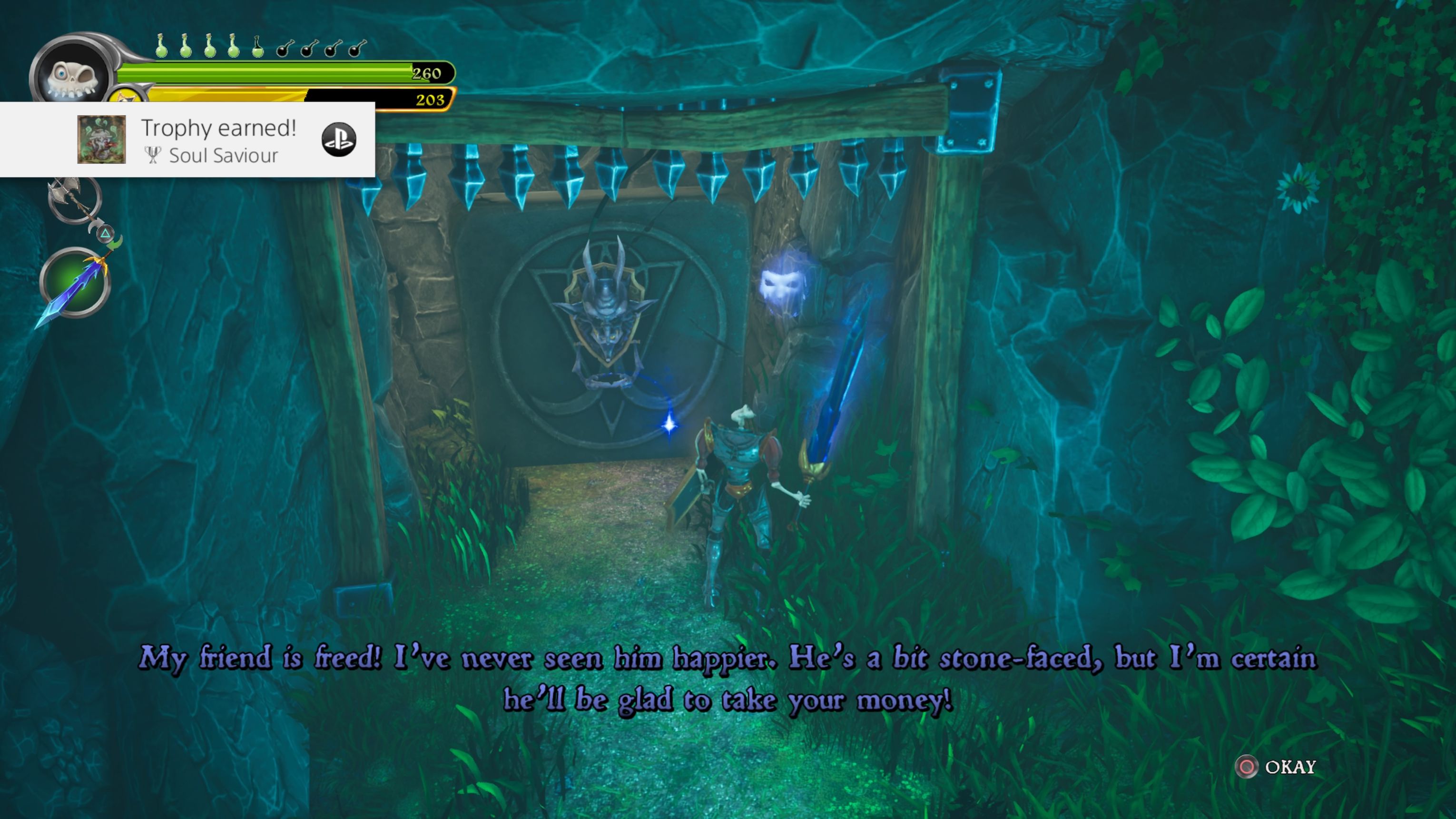 Lost Souls is new to remake and quite boring I would say.

I had to admit that game doesn’t fit well in current timeline. At least not how they did it. It’s not by any mean a step forward, but at the same times its cool that it retained all the good stuff. Still, some changes were more than welcome, and they never happened.

The rest of issues lies in technical performances and glitches. One time game froze and I had to repair my HDD afterwards. Next few times it just froze and kicked me out. The rest I was watching skeletons in the sky, so I had to restart level to be able to finish it. And god the jump is so bad. Did you know that jumping to lower part of coffin means that you will drop in the water and not retain up on it? Yep, that’s real. 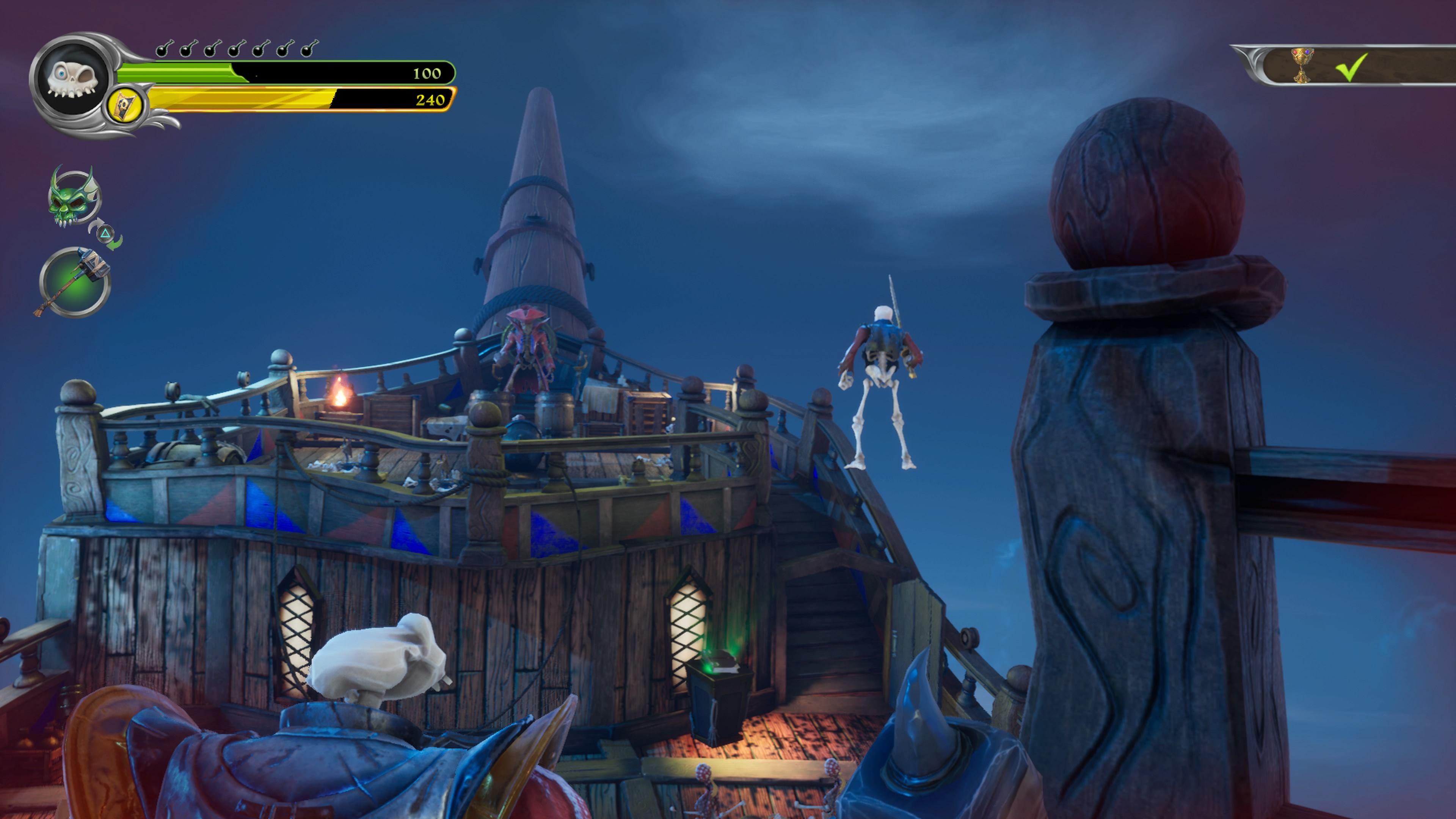 Look at this beauty. Glitches are so...I don't even have the strength anymore.

Every now and then some issue, some frustration. It just sucks the fun out of it. It’s a shame, there should be much more focus on how the game is brilliant. I somehow doubt that they will fix that when on 25th game gets released. It really shows that no game should be bought on release day, but instead to wait for a year for some discount and enough bug fixes. 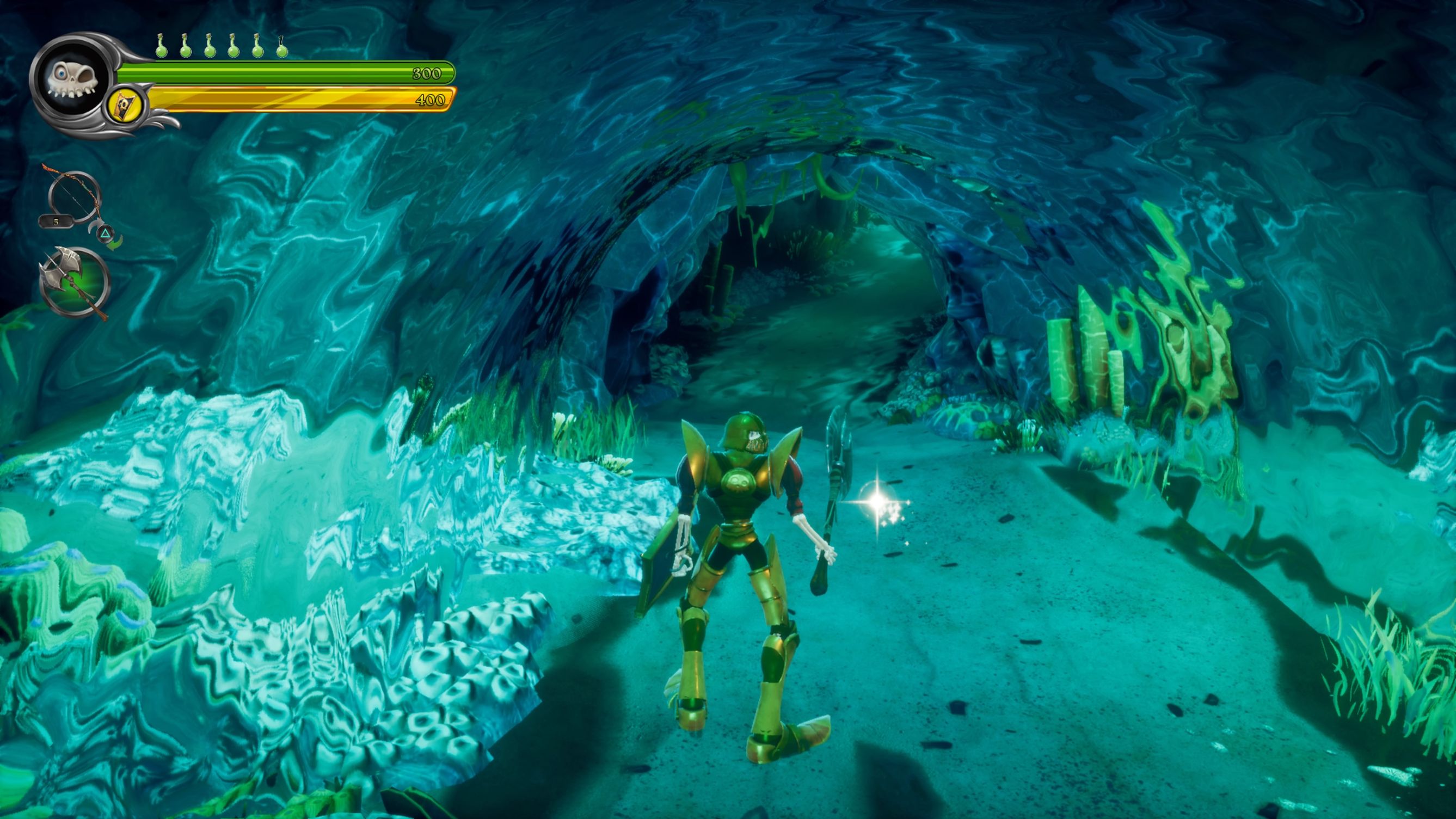 Some levels are just nice. Some aren't.

For those true nostalgic fans – definitely you will love the game. Still, you might end up being disappointed a bit. I still prefer original, even after playing this. At least way for few updates so they can fix the crucial stuff, then buy the game. I just can’t neglect that bad stuff and issues I experienced that just ruined it for me. And the fact they call this done product is just not right. When you compare with Spyro and Crash remakes, this is not in the same category. Maybe they need to think about some better development companies to do the work, because few flops and we might lose that remakes from the roadmap. Do the job like it should be done.