"Camera Obscura is back to Playstation! Exterminate your way towards peak of Mt. Himino with the help of few protagonists and the lousiest camera and controls in last 10 years." 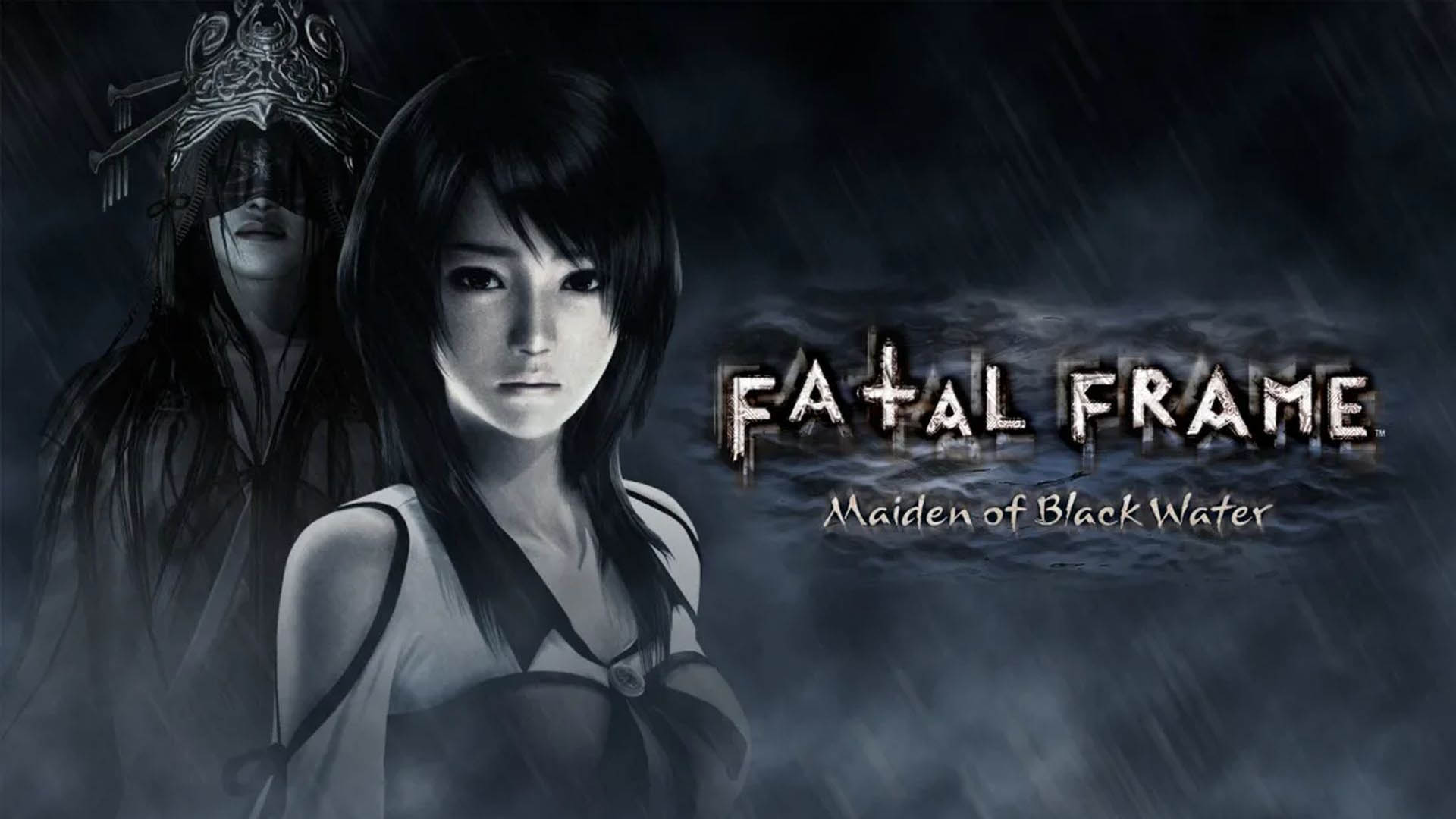 Finally a comeback. I’m not a fan of lazy remasters, but hey, playing some of the games that I loved and never experienced some of their sequels always feels right. Fatal Frame, or to be exact, Project Zero; was always the most terrifying horror game(s) ever made. Maybe Siren gets close, but in general I always trembled in fear after couple of hours in the game. Only Silent Hill comes close.

Maiden of Black Water is the 5th and final sequel of Project Zero series. It’s a story about a protagonist, or a couple of them, where you try to survive the infestation of ghosts using the Camera Obscura. Yeah, we are a badass ghost exterminators and we do it with our special camera. The whole idea about the game sounds goofy, but I assure you, there is nothing goofy about it. 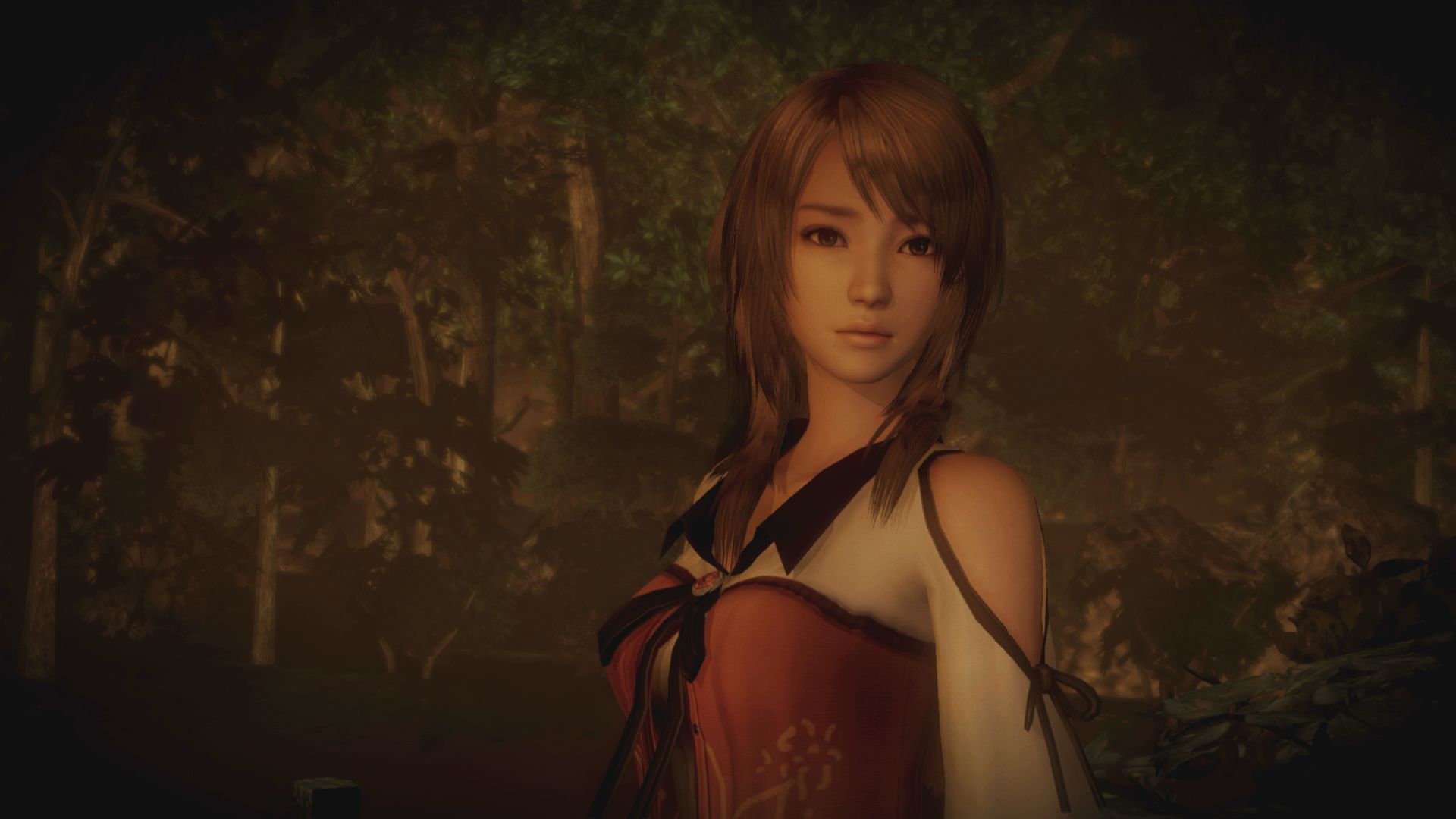 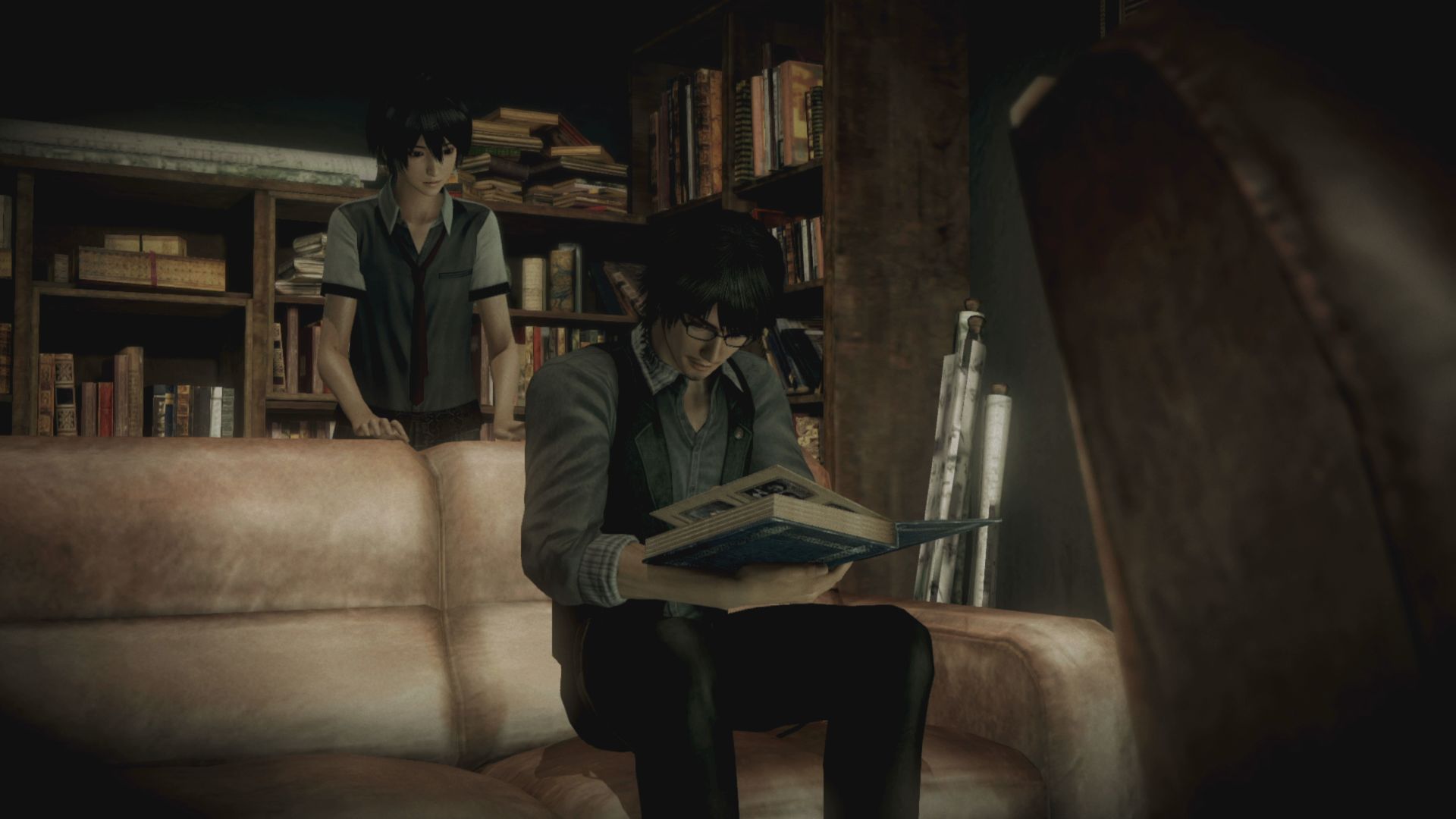 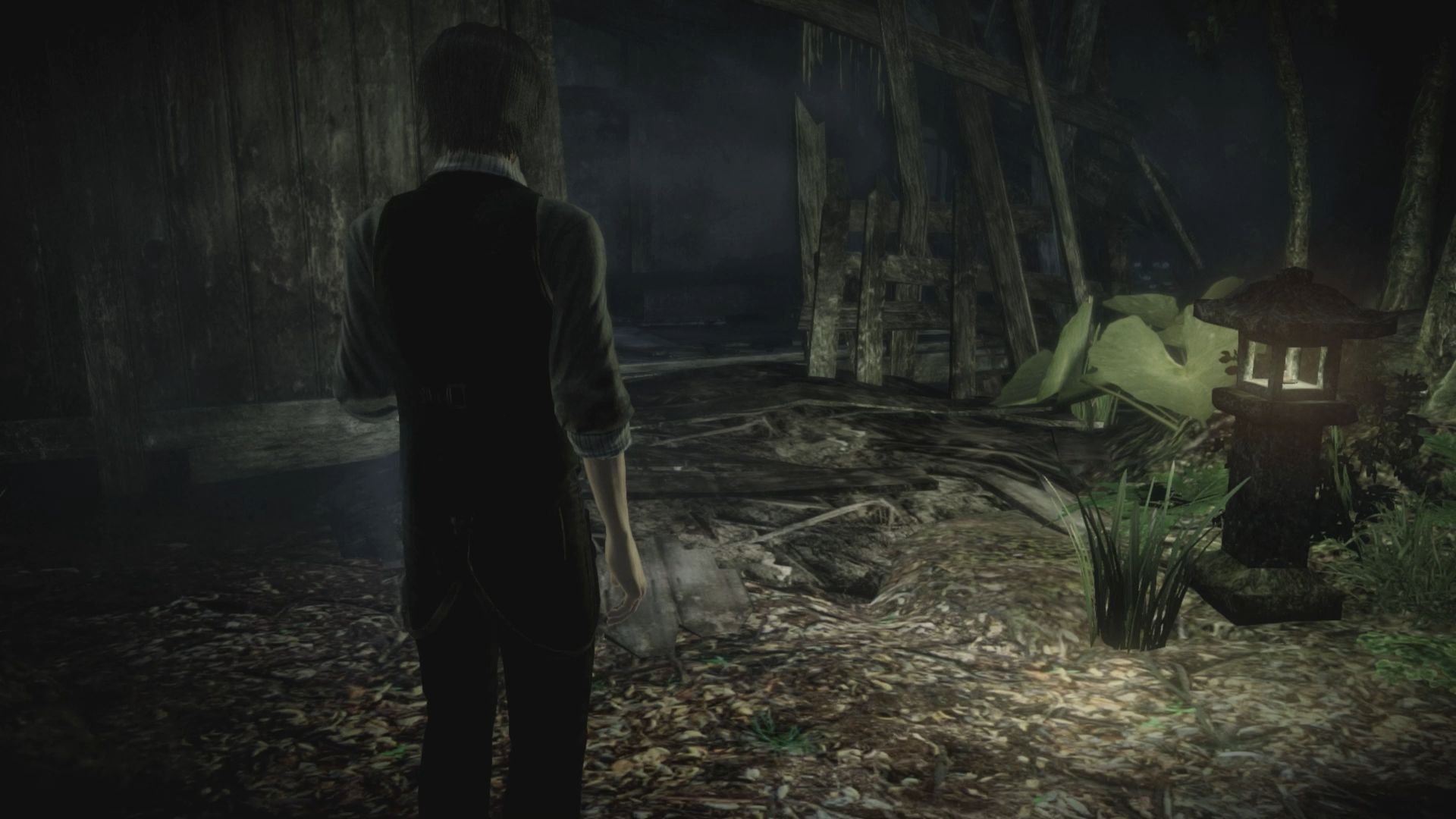 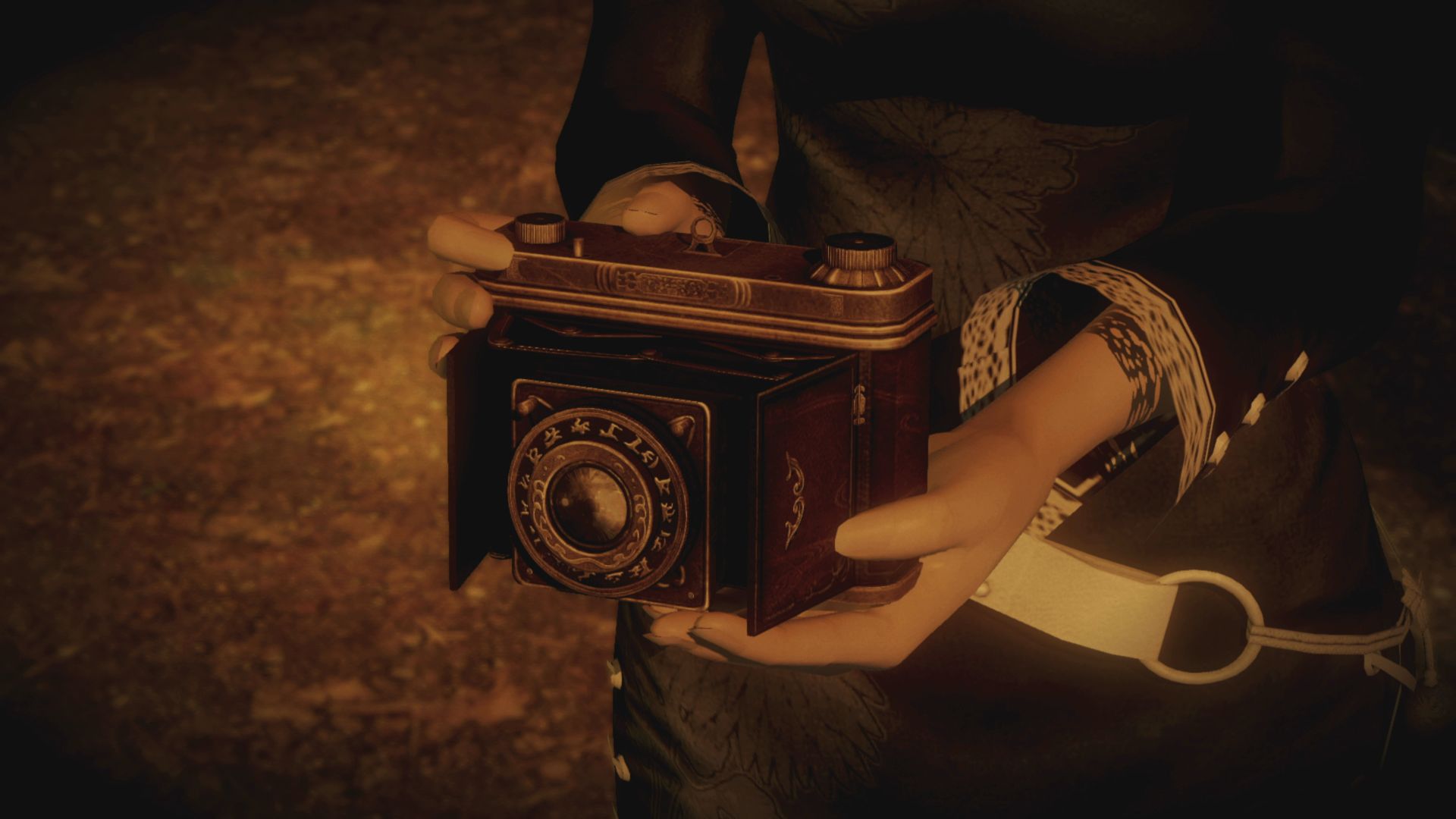 Grip onto that Camera Obscura as hard as you can - you're going to need it!

The development started in early 2011th during the development of Fatal Frame 2. Yeah, it’s the truth. Little by little this sequel gained its final form and finally during 2015th Wii U console was the host for all players out there. Too bad, not many people had Wii U, but Koei Tecmo decided this is the right move as they could use the Wii U controller to control the Camera Obscura as they intended to.

But why a remaster of critically the worst game in series? I would say that it was the easiest to port and to do the bare minimum for some easy money. I can’t describe how that gaming practice piss me off. This port looks quite decent I must say, the graphics are solid, the environment as well, but the controls and the camera… This must be one of the worst controls made for this and probably past few years. On my PS5 there was no bugs, no glitches, perfect performance, but that camera and button mapping is really bad. While you run by holding the L2 button you can’t move the camera freely with the right analogue stick (plus the camera shakes as you run). You can walk and do so. The walking is the slow as hell. You can control your Camera Obscura shot mode with motion sensor or without. I strongly suggest without, this is not a game made for Playstation controls at all. For the artists out there – Photo Mode included!

Don’t get me wrong – in 2-3 hours in you will forget all about the bad stuff and the controls will become almost as natural when you get the hang of it; I just wanted to emphasise the frustration I had in the start. The first impression was really 6/10, and I can understand the review bombs. But, there is a but, and you should stick with this review to get that but explained. 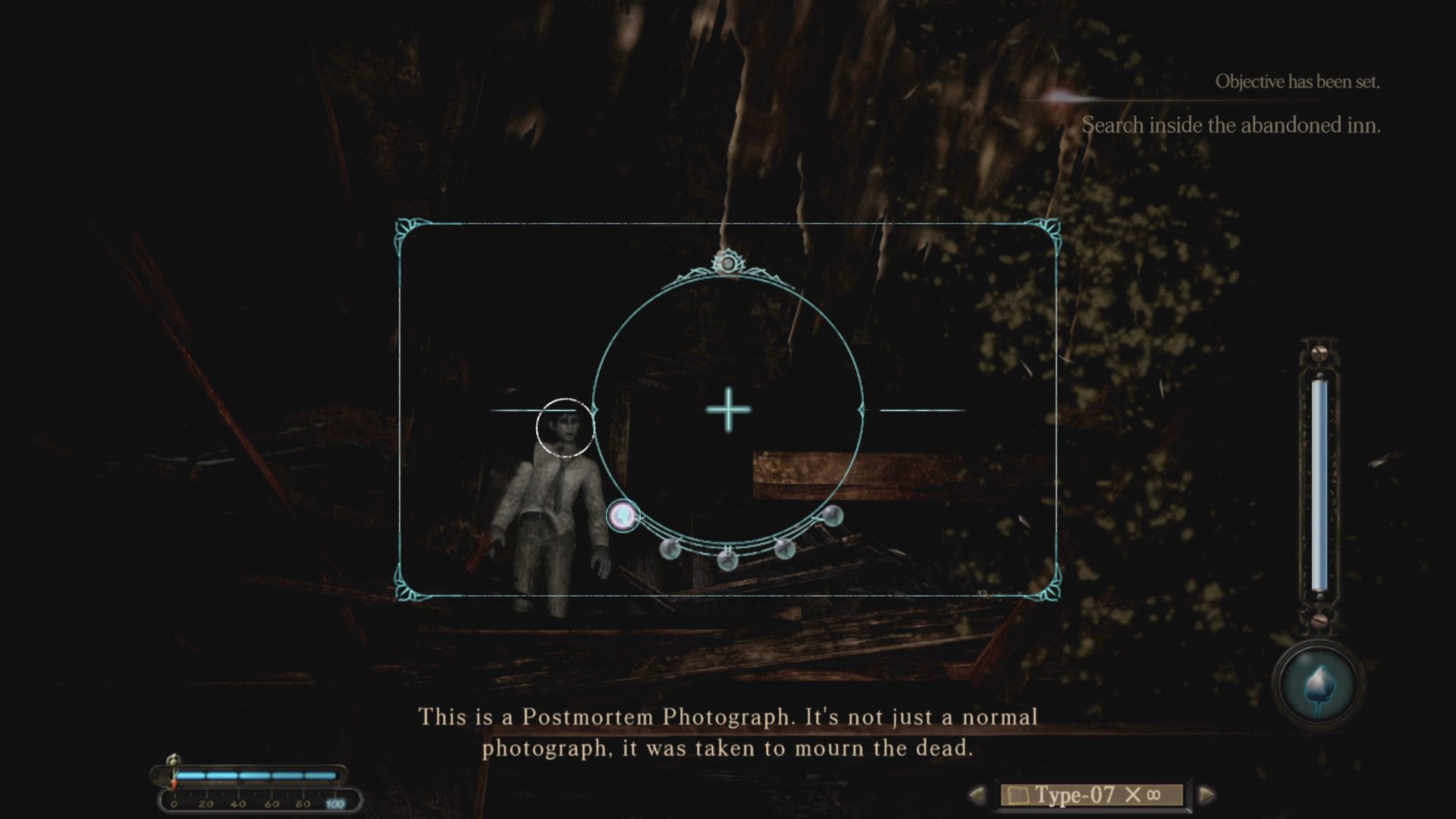 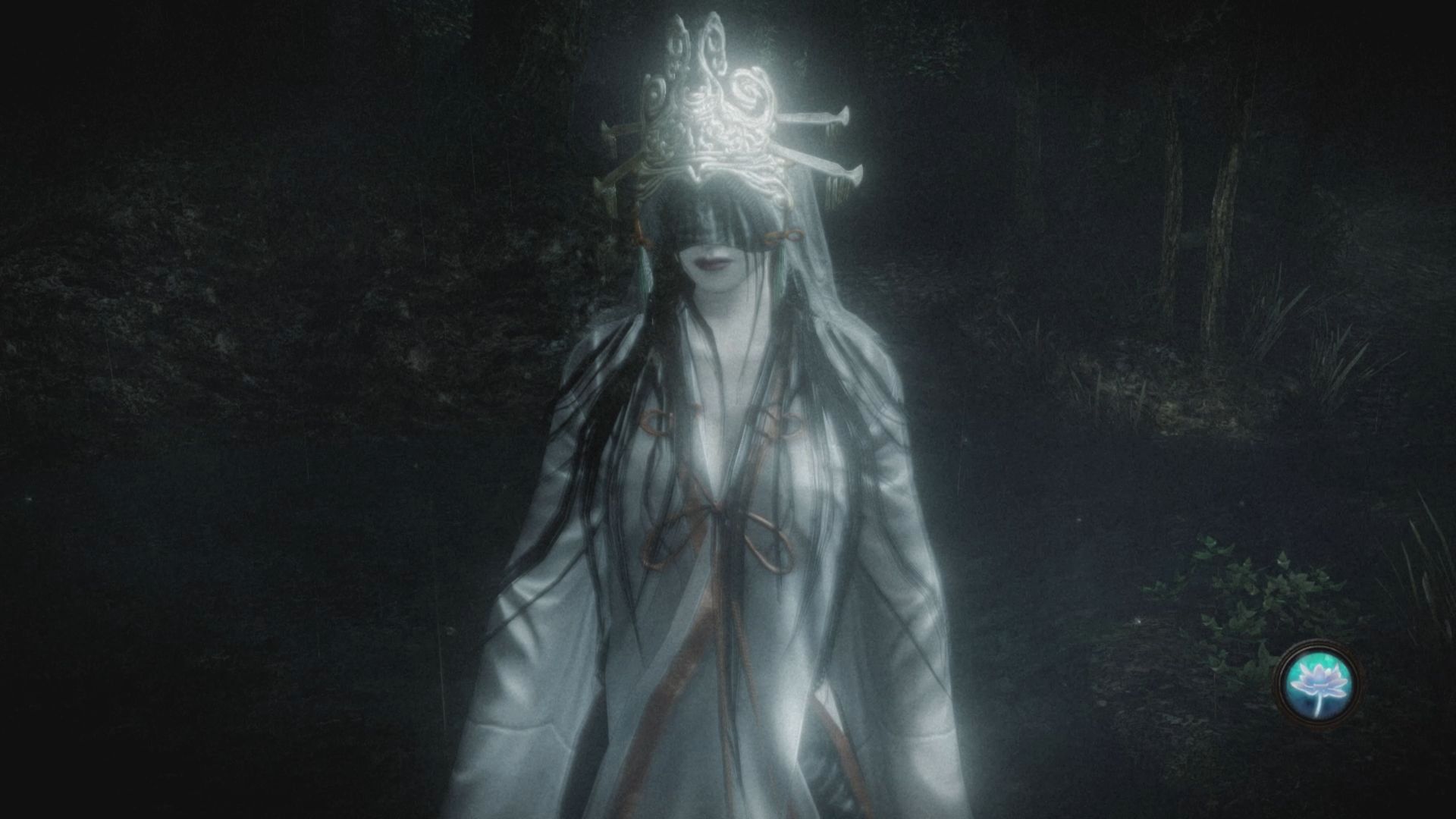 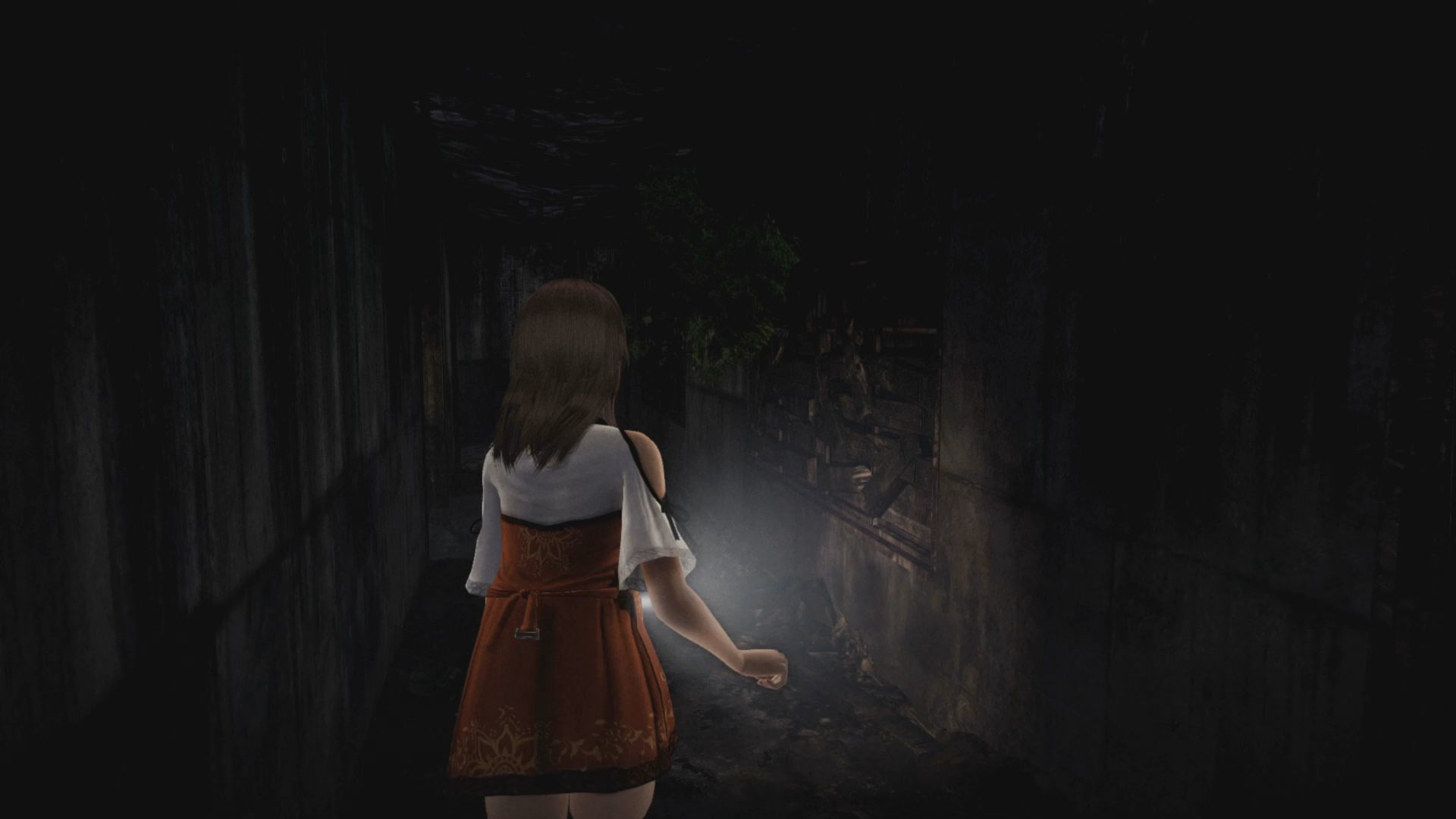 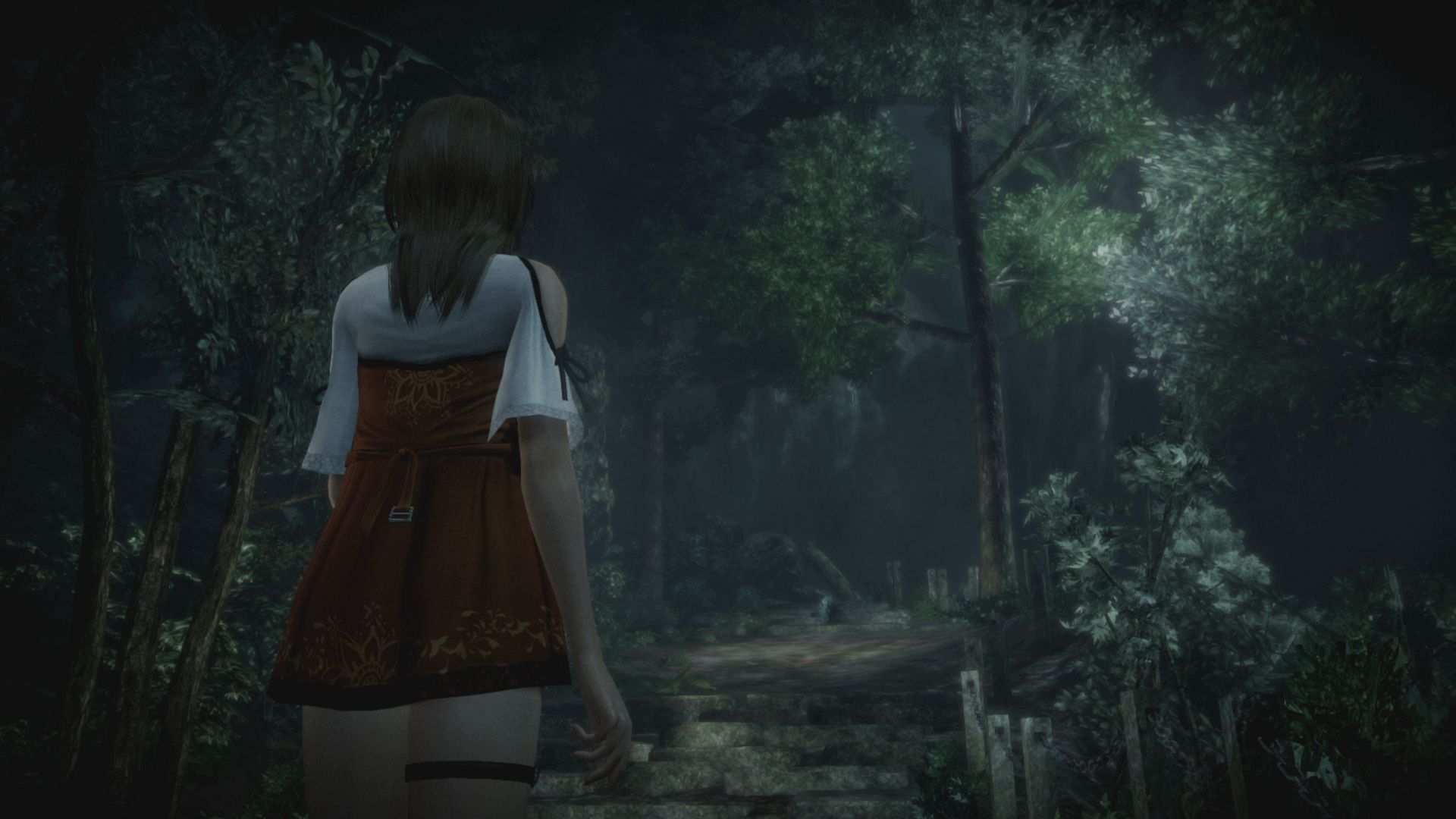 No, not spooky at all. Each step you take comes with a reward and a jump-scare. You though you're just going to move freely through the mountain? No can do young cameraman.

First of all, the story. We play through drops that comes as chapters. Something like episodes per say. We control certain character during certain chapter. Yuri – new protagonist of the series, a young girl with the ability to see ghosts. Her past is a dark one as she lost her parents in an accident, which lead to her supernatural abilities.  She also has the ability to bring people back from the shadow world into the real world due to her descent from the Hikami shrine maidens. Then we have Ren Hojo, an author and friend of Yuri who goes to the mountain to research his new book; and Miu Hinasaki, the daughter of recurring Fatal Frame protagonist Miku Hinasaki.

In short, that is the only “sane” part of the game. All mentioned protagonists resides in the Kurosawa Antiques store, from where they often wander after their friends into the cursed, spooky mountain. You will have nightmares and follow ghosts, experience all kinds of supernatural, but one thing is common – The Hikami Mountain.

I can say that I was a bit confused with the story. You need to read all files throughout the game to get a glimpse of past and present events. Each protagonist revolves around their part and characters, which I liked and the idea to put them together at the end was cool. Still, I will never forget Fatal Frame 2, which I consider to be the best. The story here seems decent and interesting, but the whole concept of going to the mountain and always coming back felt a bit too much at some points. 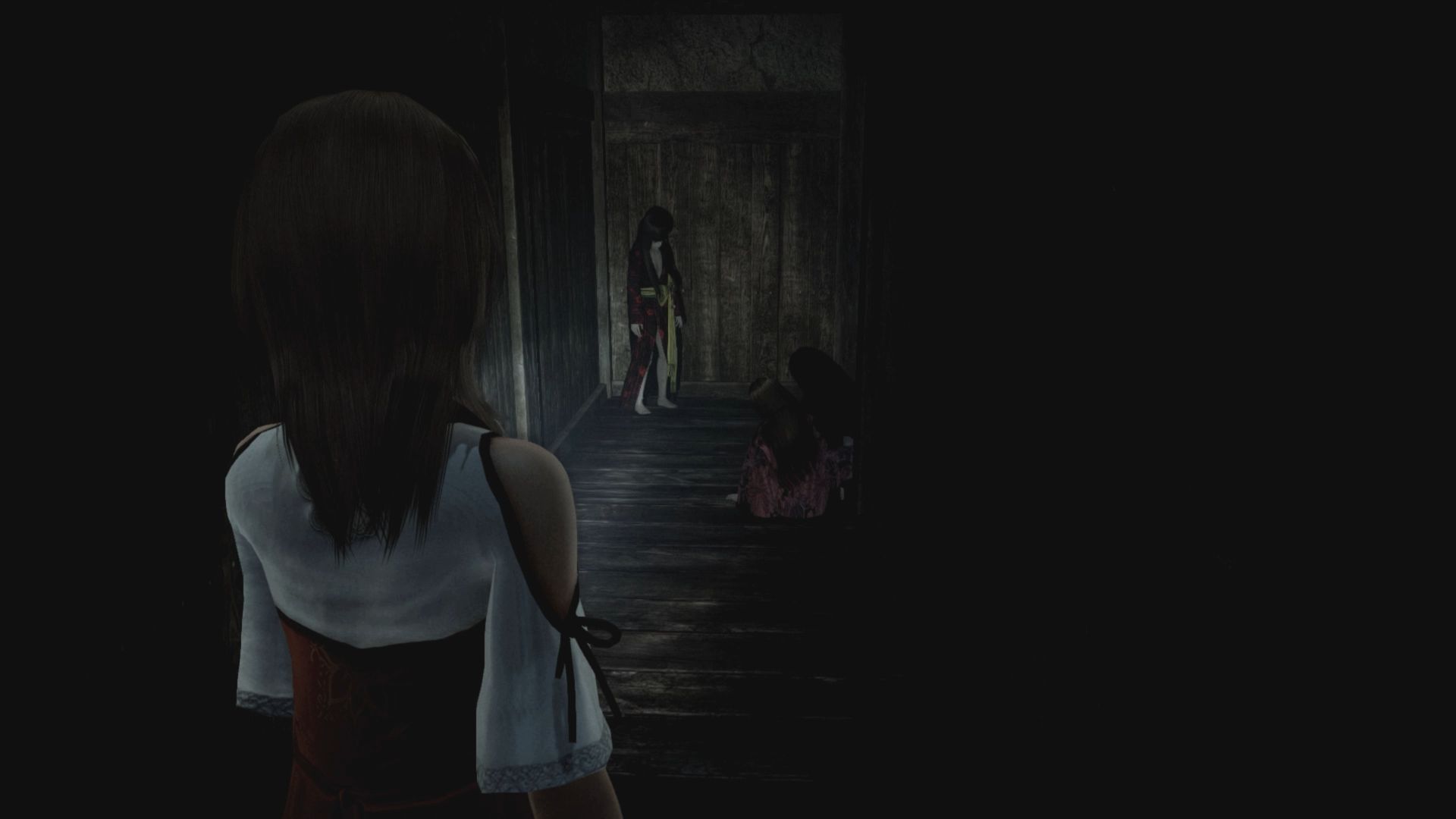 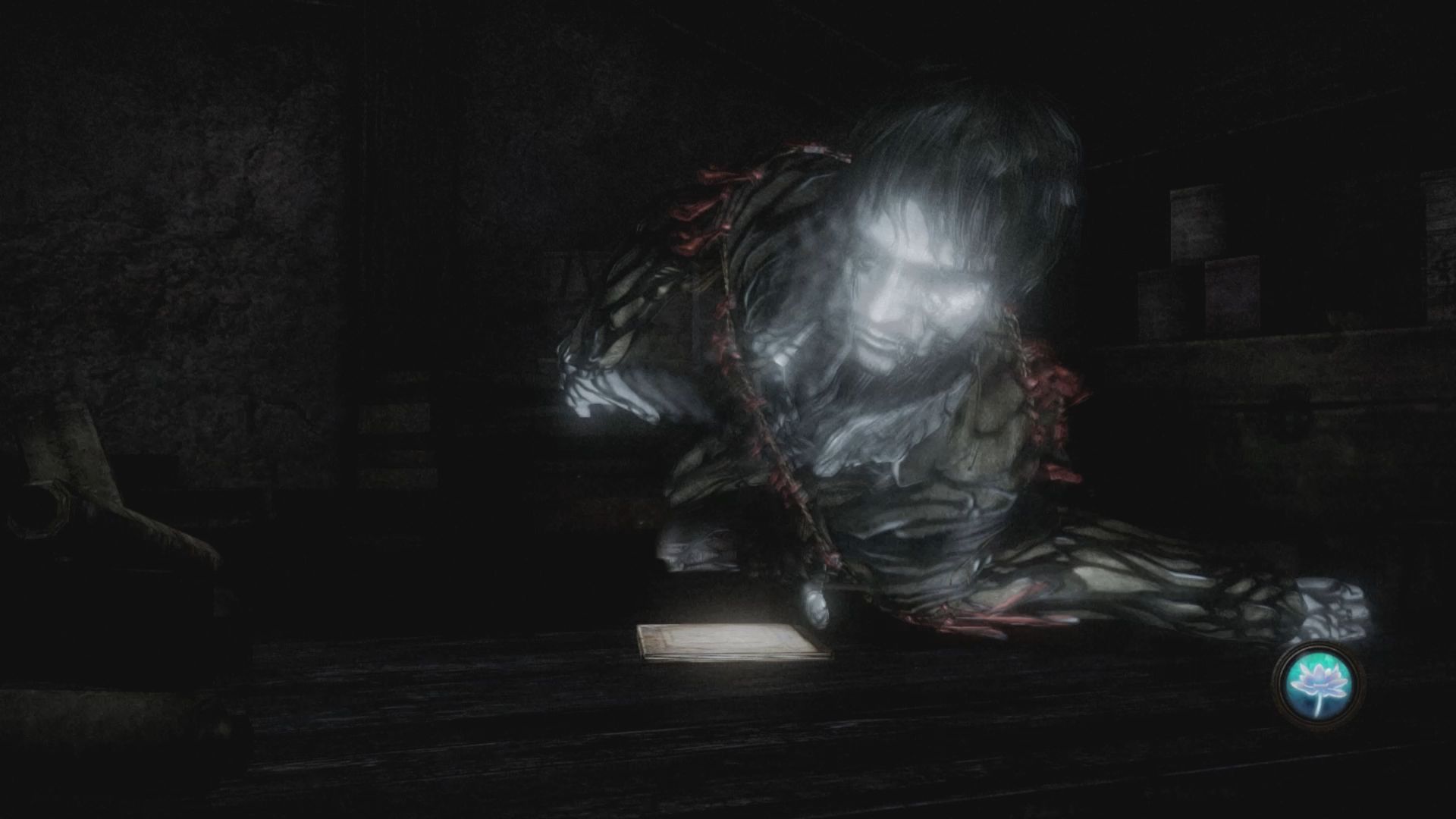 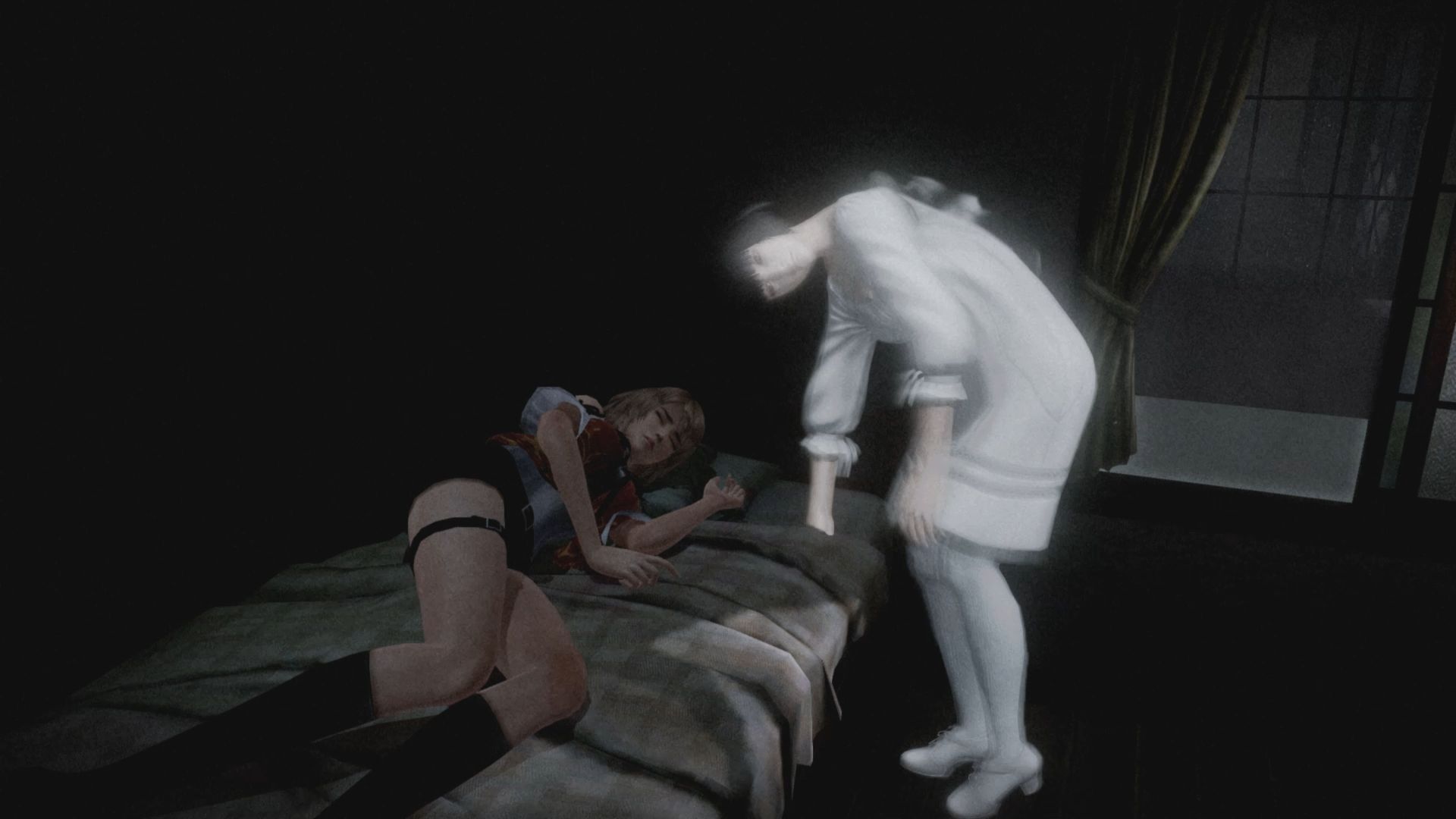 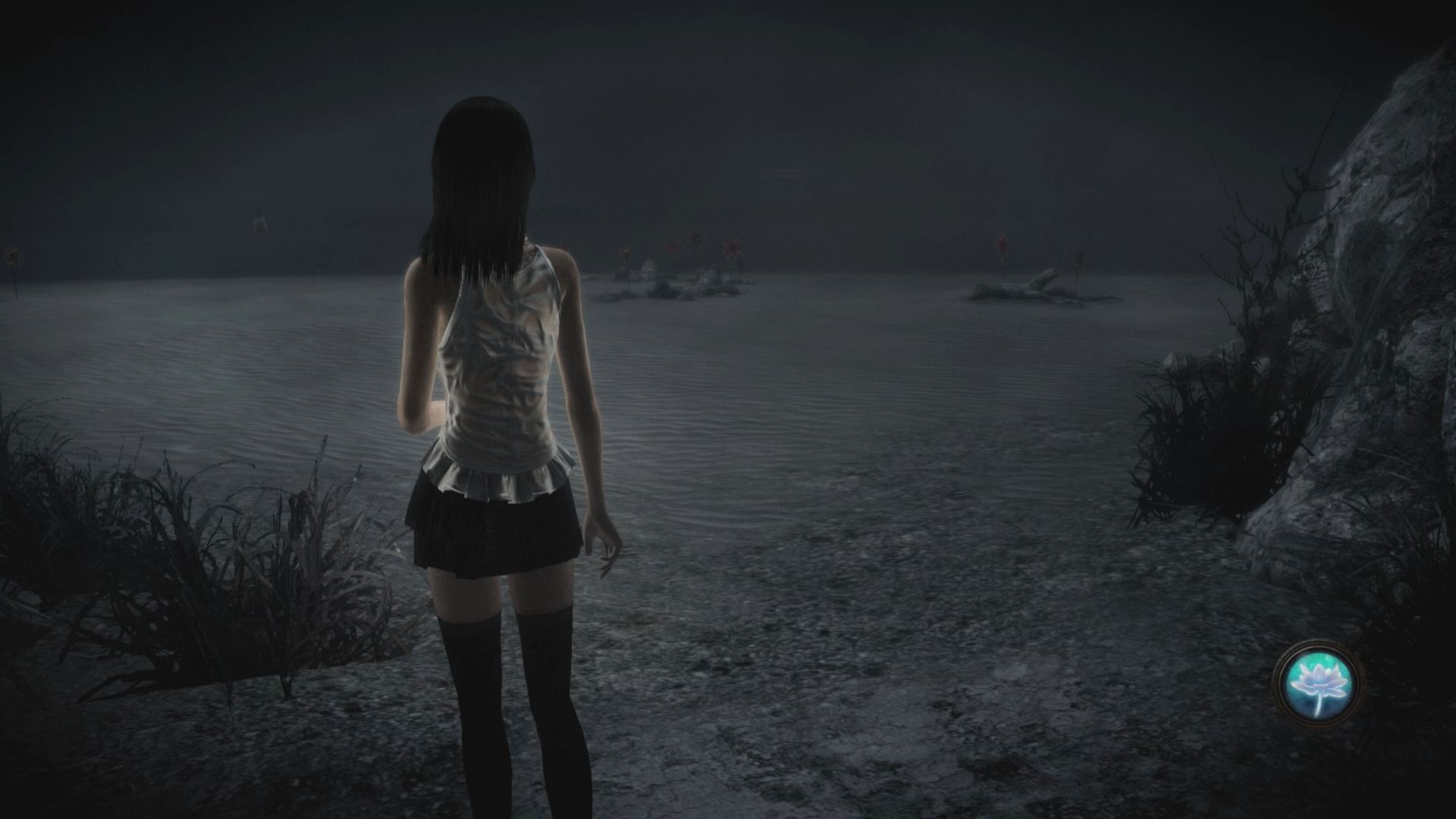 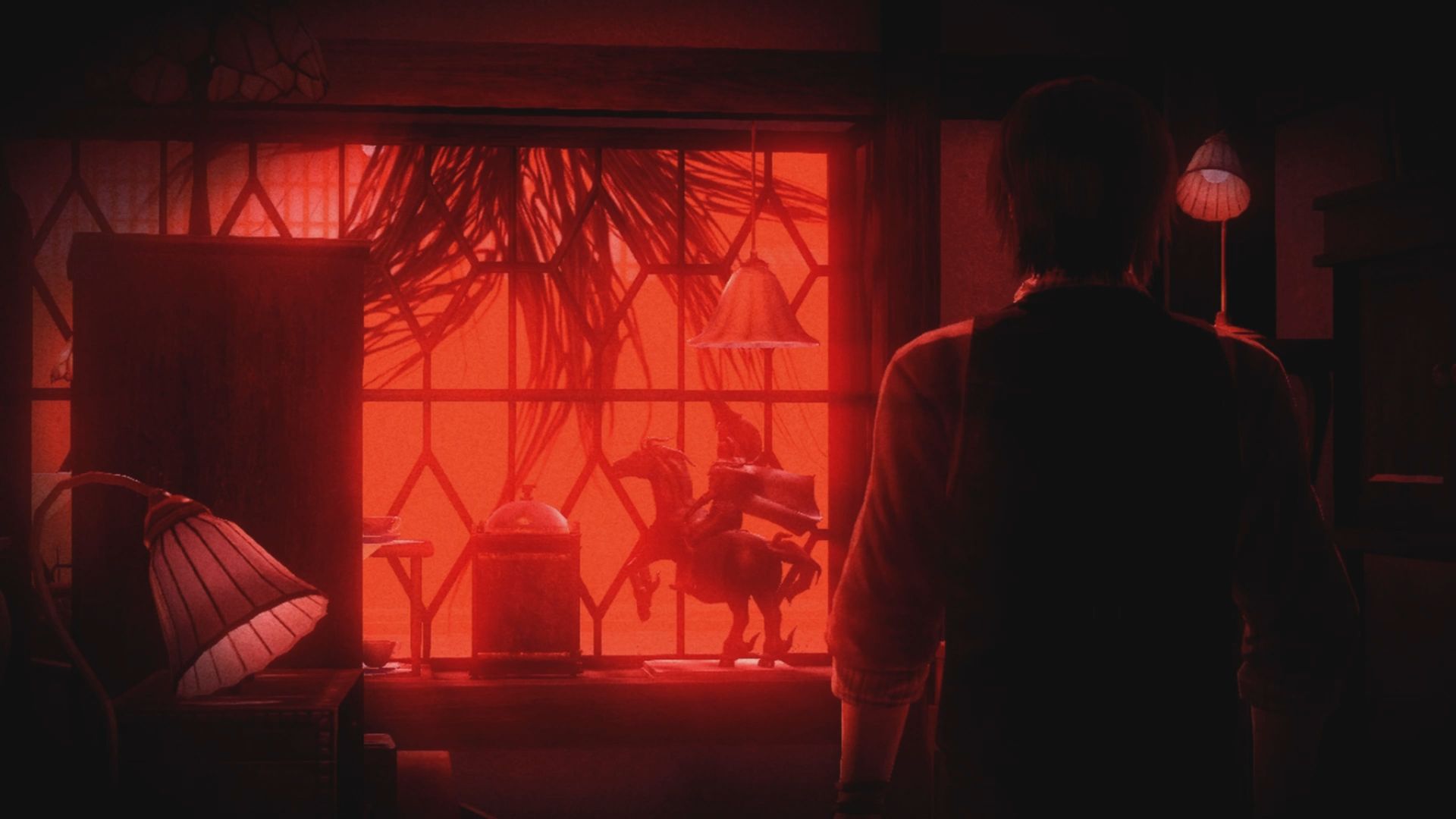 I don't know if I really need to give any descripion for these photos... Self-explanatory. Beautiful gray, film-grain scenery that works perfectly with the atmosphere you get while playing Maiden of Black Water.

During your journey you will, of course, find Camera Obscura. A name I cannot ever forget. It’s an old-school camera capable of seeing ghosts and exterminating them. Cool? Weird I would say. And you can find different lens and upgrades to raise the output damage. What comes along with a camera? A film! Consider film as ammo.

Through each chapter you start with some basic healing items and some film. There are few types of films. Some are stronger, some refill faster, some are weak but good for raising points. If you aim to collect everything in this game, you will have to use the weakest film and time your shots perfectly to get the most points. Every photo of the ghost you take means you did some damage and raised some points. You can do critical hits, which usually comes when a ghost is about to hit you. They are called Fatal Frame and they are the key for getting enough points for highest ranks. Shutter Chance is the strongest, and it comes while targeting at least 5 objects in the frame at the same time. Taking photos is also done by adjusting the frame orientation – that will widen your hit radius to get the most objects in the frame. I loved the combat, all ghosts you encounter are different and they have similar, yet different patterns to overcome.

Upgrading camera and lens help of course, so spend those accumulated points wisely. Ren and Yuri have different cameras, which means you have 2 to think about. I don’t want to spoil epilogue for you, so let’s stop on that. I will just say that you can unlock different endings which is cool. 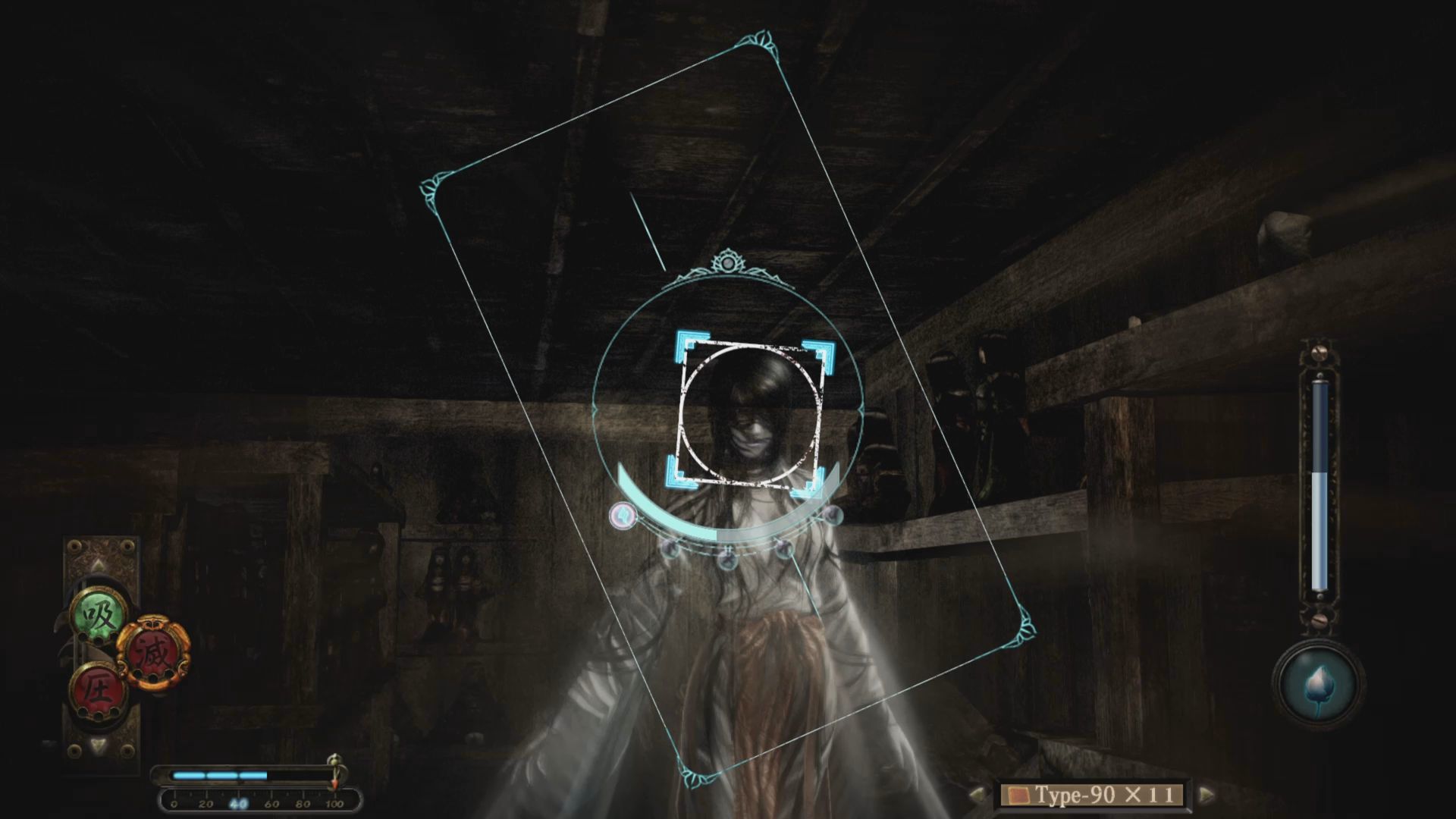 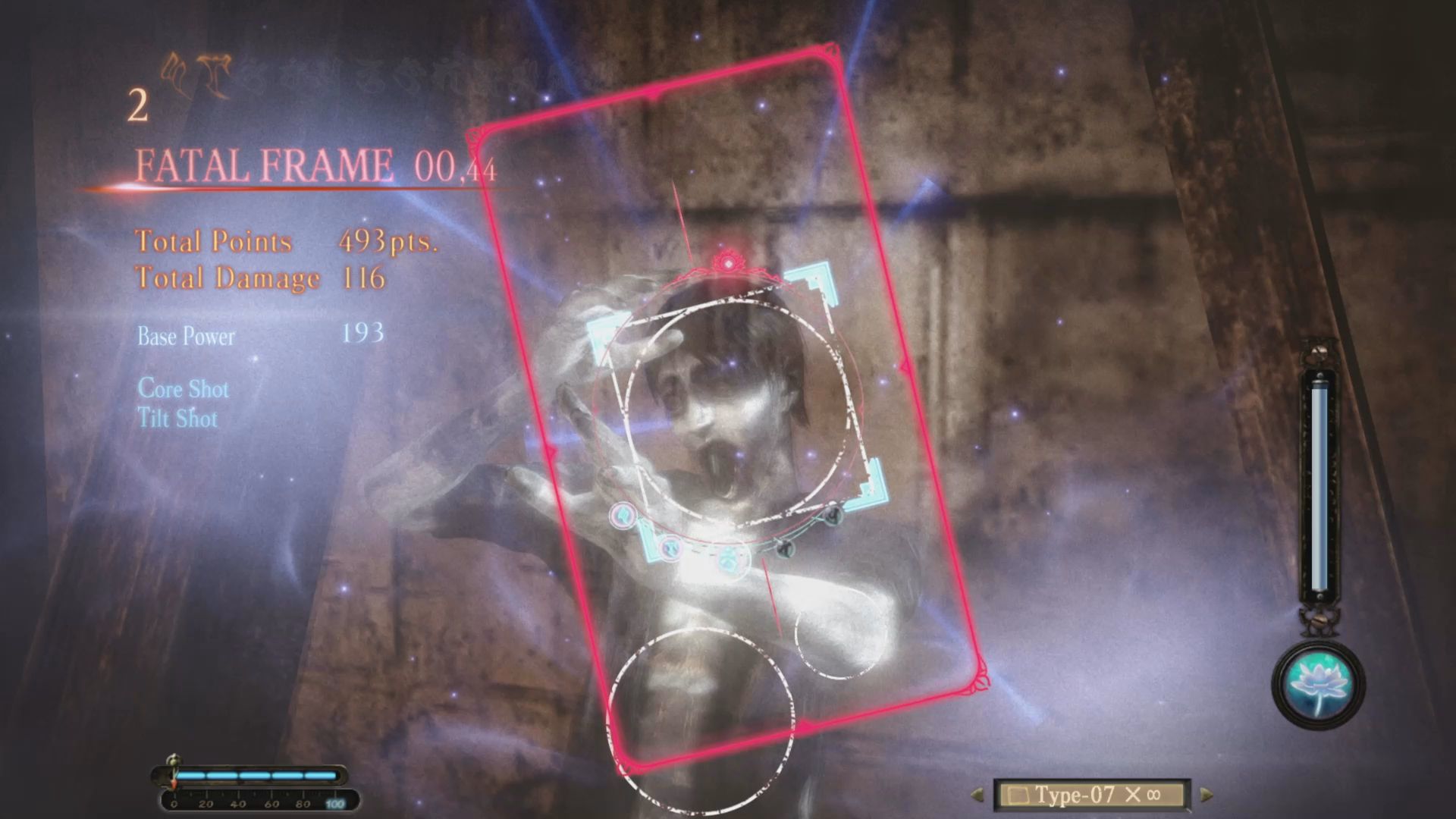 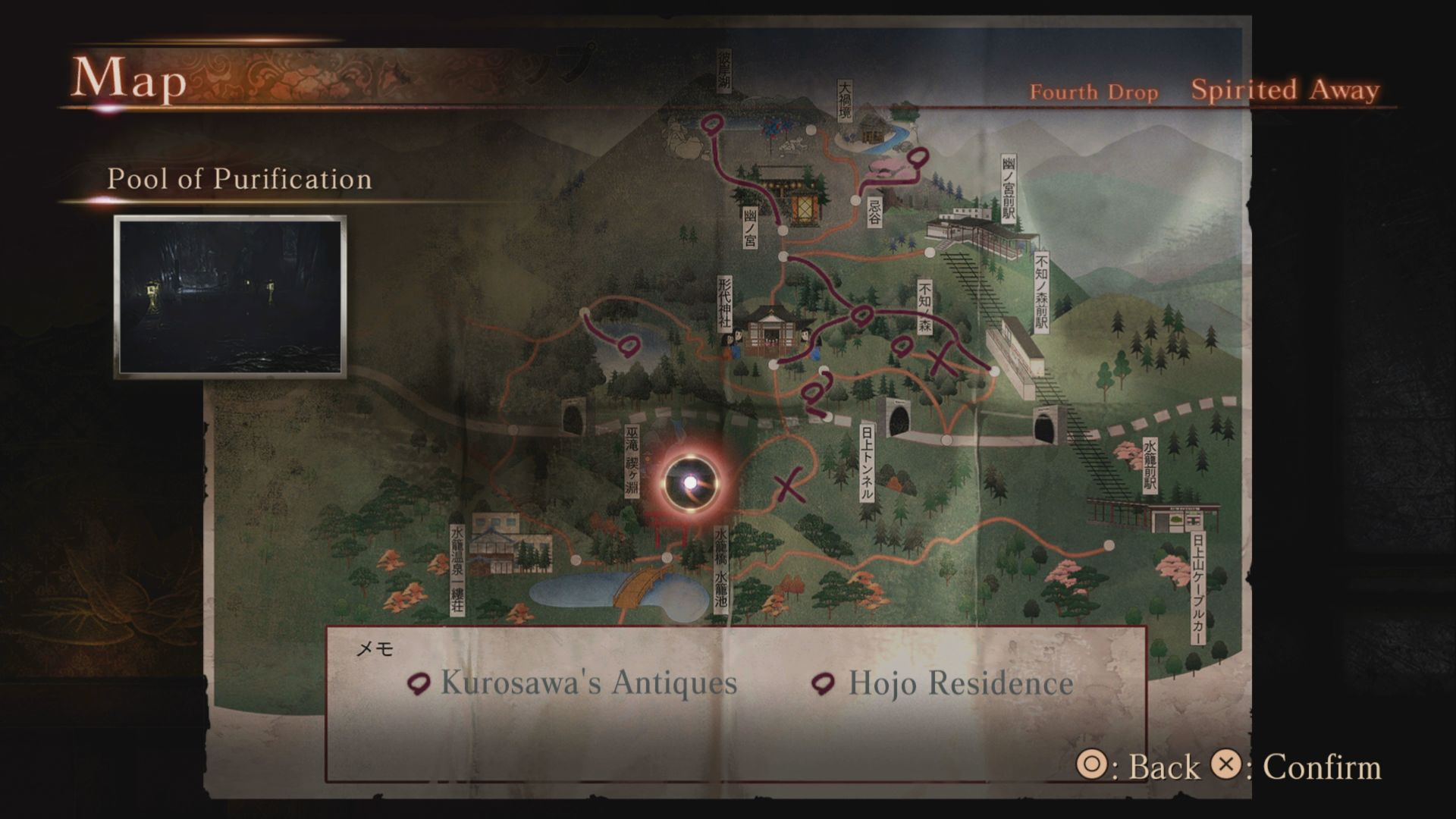 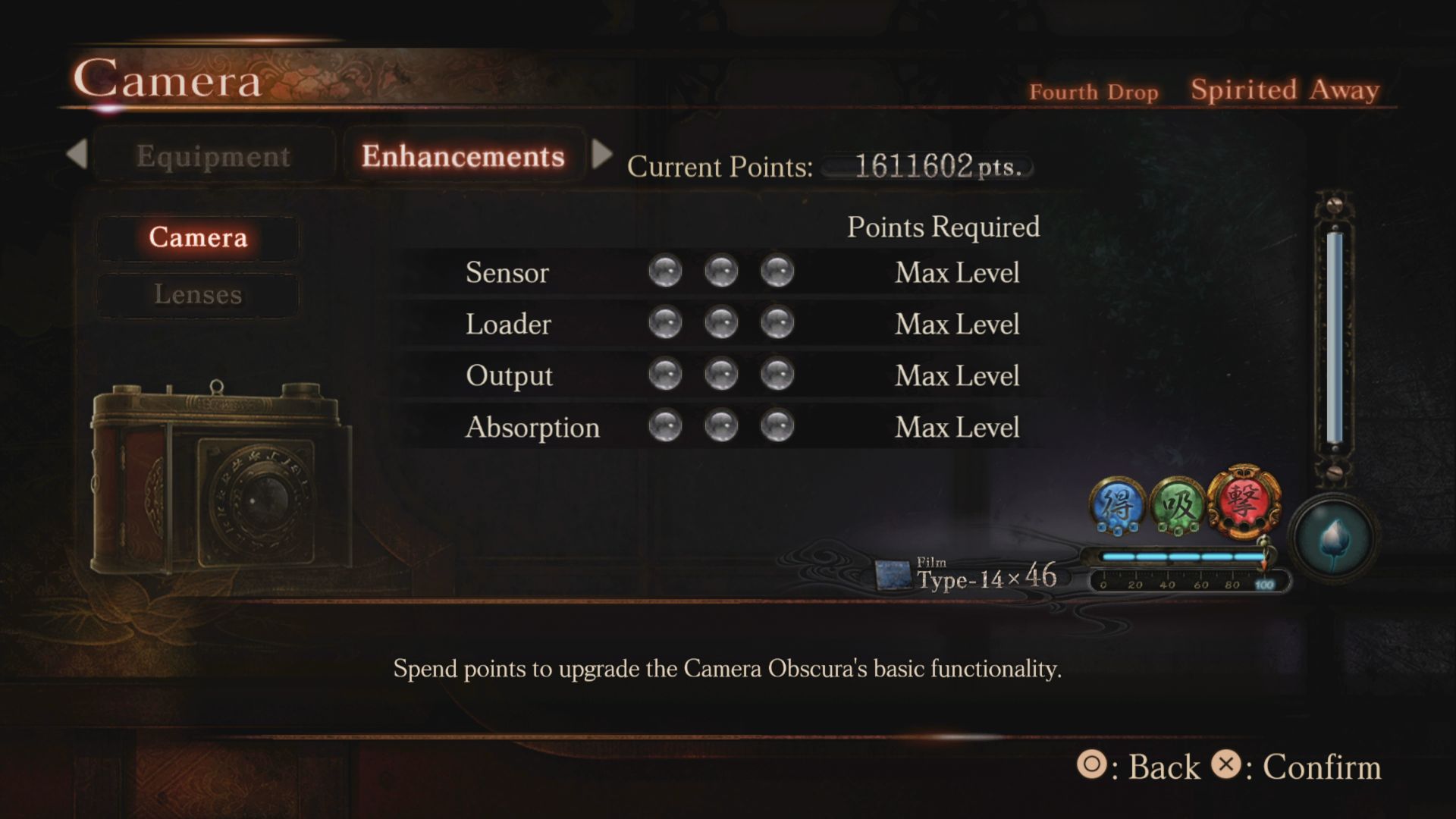 Good thing is that you have unlimited film (ammo) of one type. The bad thing is that this film is weak, like, really weak. You can use special shots like Crush/Blow Lens and upgrade as you see fit. It's not much, but gets the player happy.

Although fighting ghosts is not bad, sometimes it’s very slow (the ghosts just circle around and do nothing). They teleport all over the place, often getting behind walls. Killing a ghost opens an opportunity to touch them (glance them), which leads to unlocking a video how that ghost died. Spooky as hell, let me tell you that. Loved it, really did. I love how you can unlock more story-related stuff by doing certain game mechanics.

On the other hand, the thing I disliked a bit is the concept of each chapter. Usually you follow someone to the mountain, find him, and then travel back. It gets stale after some time. What’s positive about this is almost constantly different locations and situations you will find yourself into. Yes, the whole mountain and all the paths there are one big location, but all paths are limited during chapters and you go and explore different areas all the time (ok, few times you repeat some parts).

I thought this would be the biggest issue (the constant backtracking), but nope. All chapters felt solid. I think the atmosphere and the constant fear how will things evolve helped a lot. I can’t even describe how good the music in the background is, plus the atmosphere of this horror game. It’s always dark and scary. Ghosts are everywhere and the angles of the camera often jump-scare you every now and then. You will always be on the edge while exploring. Even when you pick up the item from the floor you must be careful – a ghost hand can grab you, so you must let go of the button to avoid it.

And the thing I absolutely love – random ghost pictures. Each chapter is full of ghosts called Specters/Traces that show up at certain points and stay revealed just for a few seconds. You need to take the shot to capture them. It was so fun finding them all, I was really enjoying myself with this part of the game. There is just so much to find. I love when the game offers a lot, and you can even pass up on that and just play the story. I felt in love when I was exploring and getting familiar with the mountain and its sub-locations. Some are just beautiful. 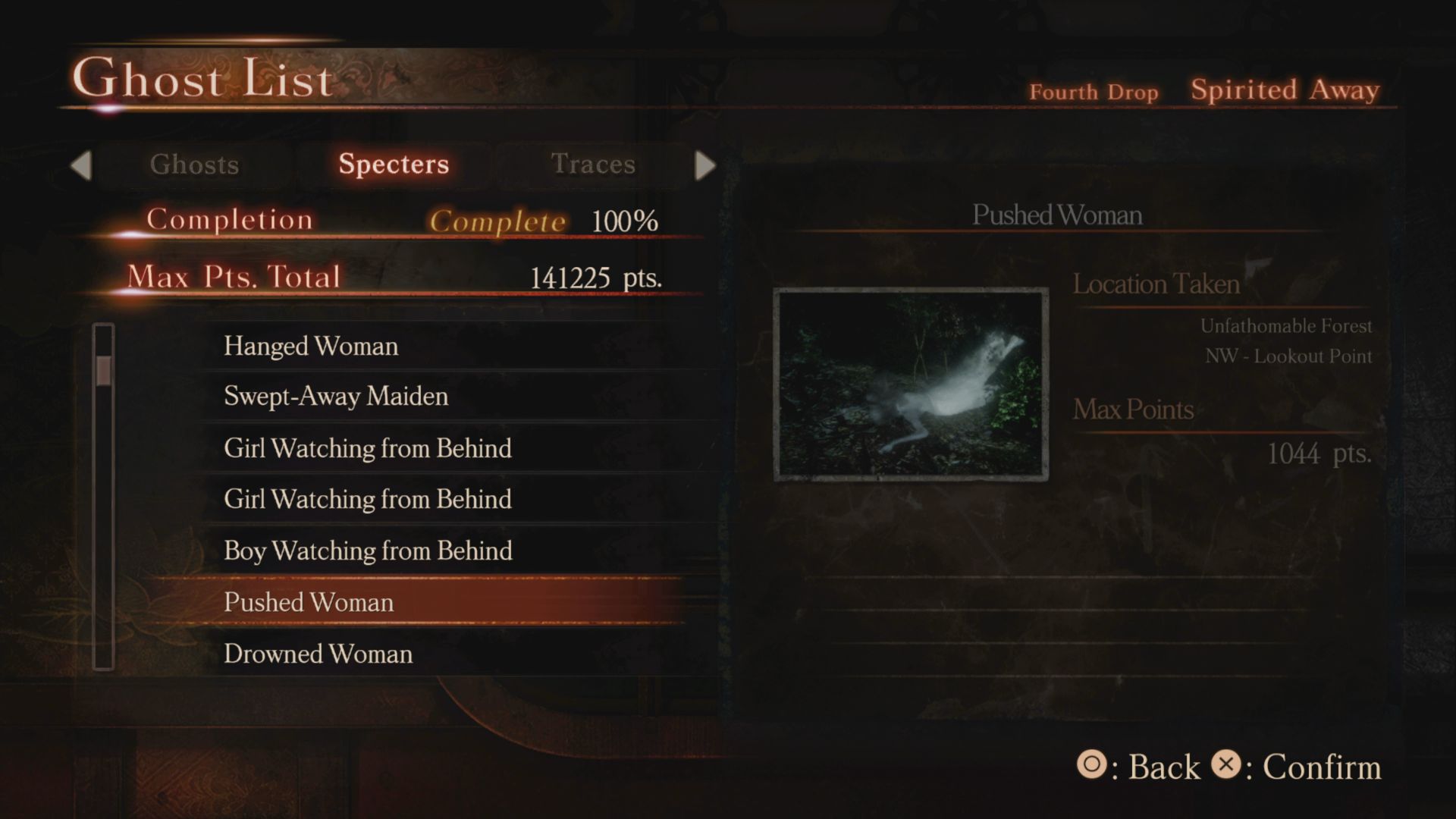 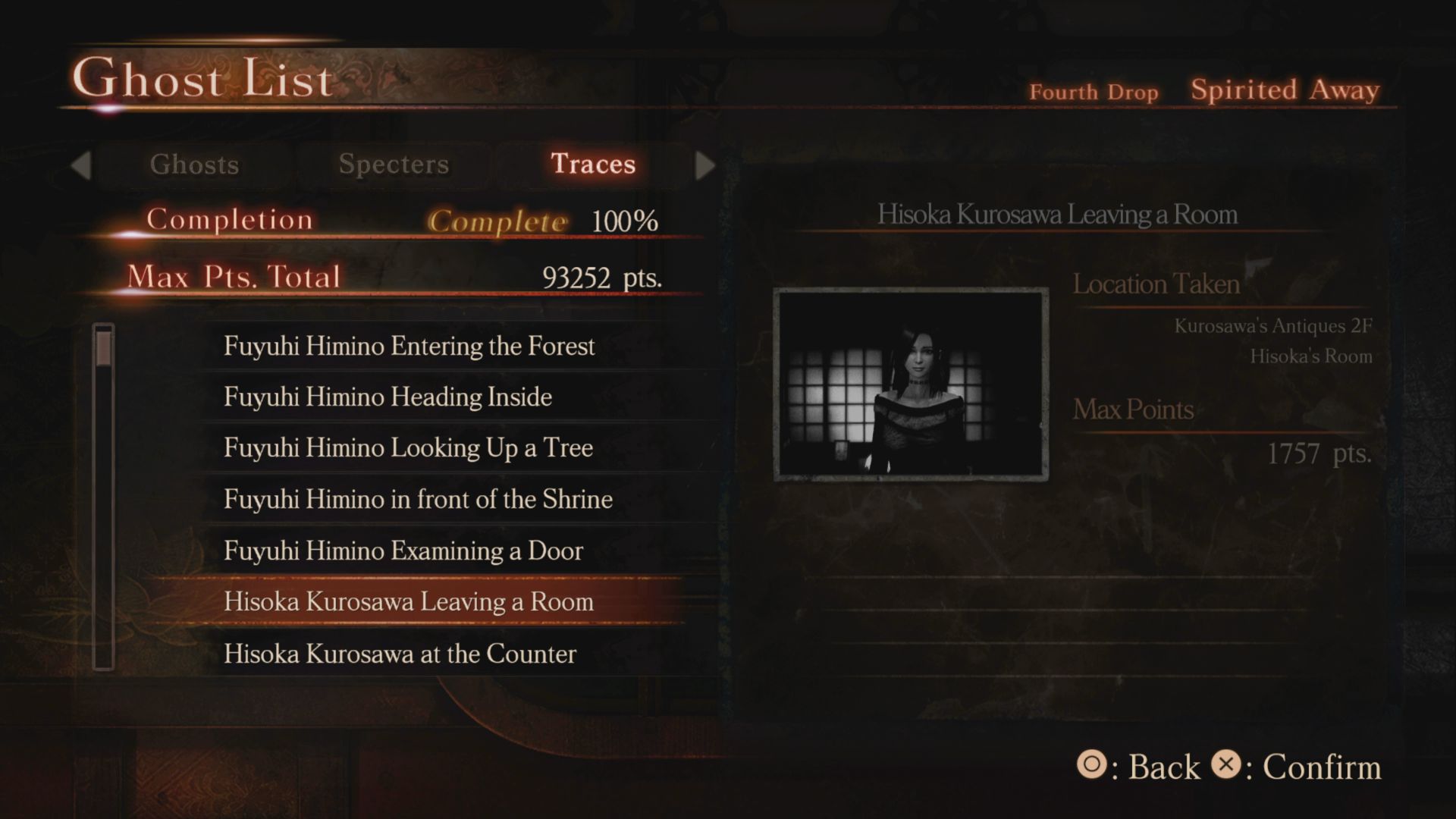 I enjoyed watching ghost movies. Almost all ghosts comes with a video of how they died (no, I'm not a serial killer, I just like the idea of additional content in form of side-stuff). Unlocking and finding everything is one big task, let me tell you that! Nevertheless, I have done it.

And the final verdict…

I think the game got too low grades at the time, and even now. It’s not fair. Maybe they did a lousy job with movement (controls) and the camera itself, but the atmosphere, concept and the horror is just great. I loved the game, loved every minute of it (although I was a bit under the “sloppy” impression for first 4 chapters).

The problems in the game are bad button mapping and what I mentioned. The same button is the action button for pickup up items, opening doors and glancing ghosts. Imagine pushing a ghost next to the door which is close to some item. Yep, confusion enters. Add camera with a will of its own in tight spaces and you will feel the frustration for sure.

If you can overcome the last-gen issues, you will get one solid horror game, with big emphasis on the horror. This is a true representative of the genre and I root for some new game to the series. If they really want to remaster more games, please do the second one. Thank you and goodbye (I really have troubles sleeping lately).

"The worst in the series for sure, but with a lot to like. The horror is real within this one!" 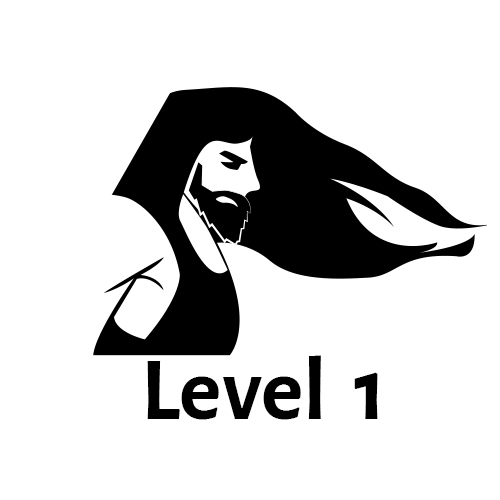 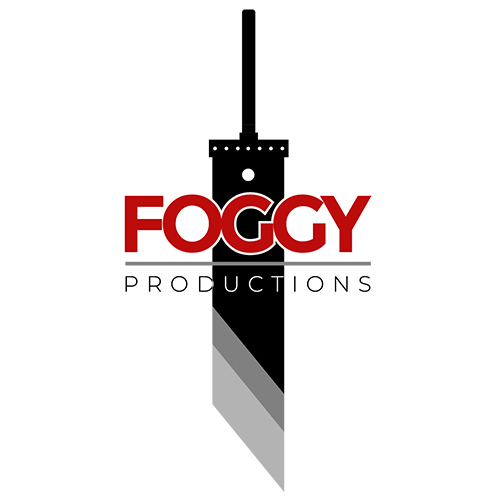 Can't argue with that