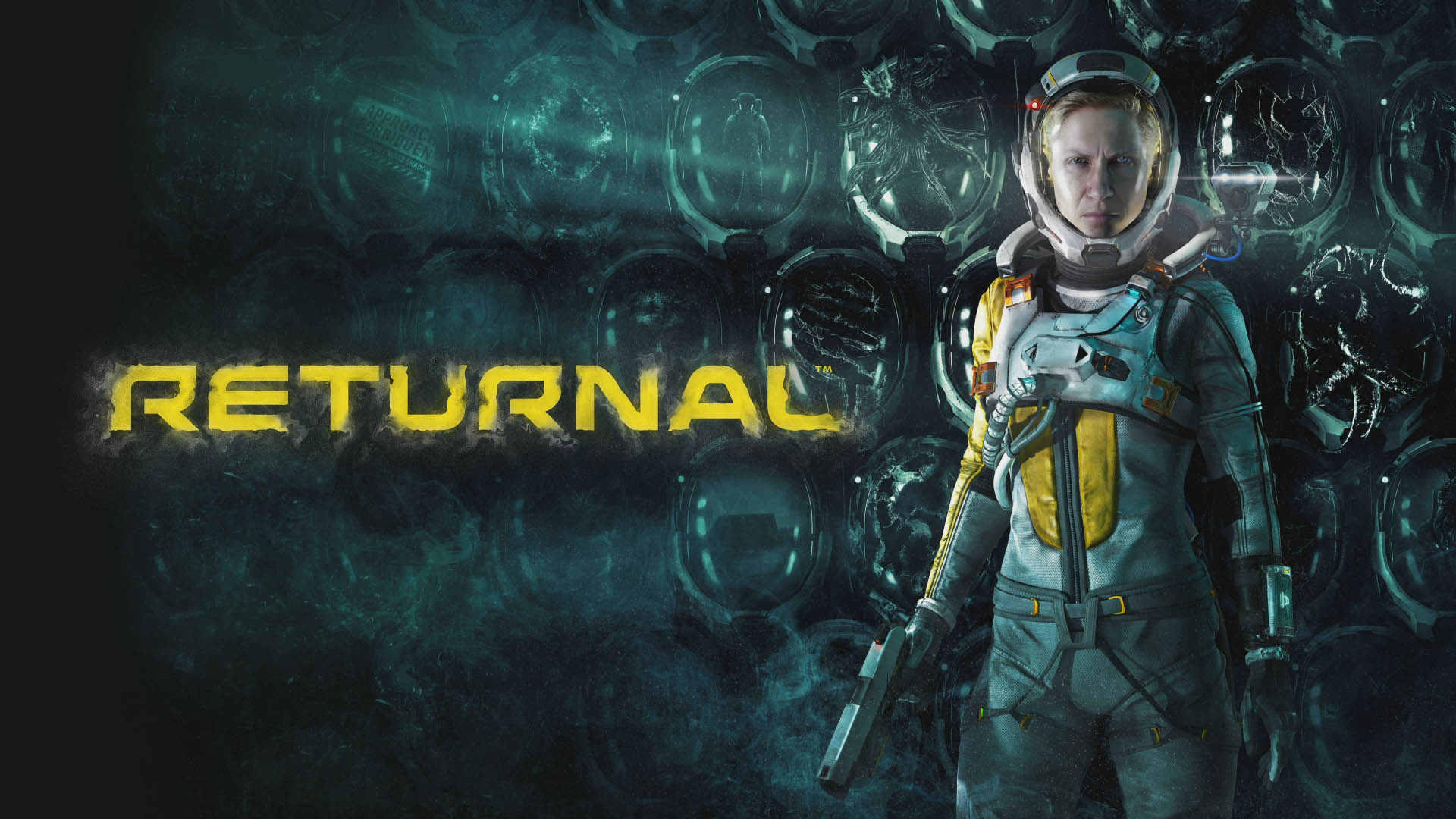 Roguelike genre was always a bit of mystery to me. I knew about the genre, but I hate losing progress when I die (I don’t mind the procedurally generated dungeons though). Therefore, nothing that comes with that formula never entered my console. Until Hades and now Returnal. Am I glad? Sure.

Returnal is a new game from Housemarque developers. You may know them for making Resogun and Alienation, or this could in fact be your first contact with that team. For me it was, and only because I heard only positive comments about Returnal.

You can play Returnal on PS5, making it one of rare next-gen exclusives up to date. It holds the price, but I can respect that. Is this the ultimate next-gen experience? No. Is it the best of its genre? Well, since I’ve played only 2 games, for me it is. 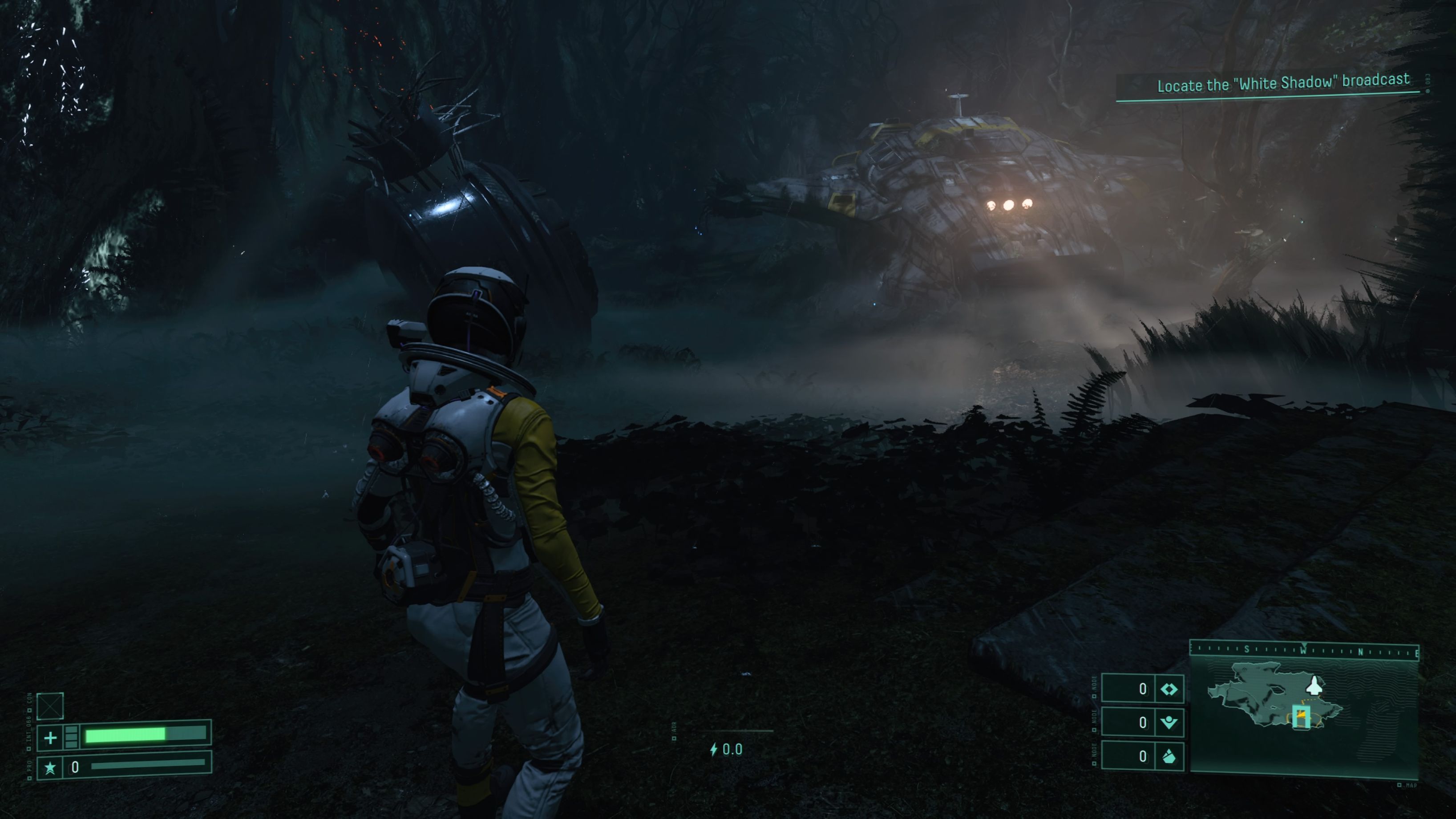 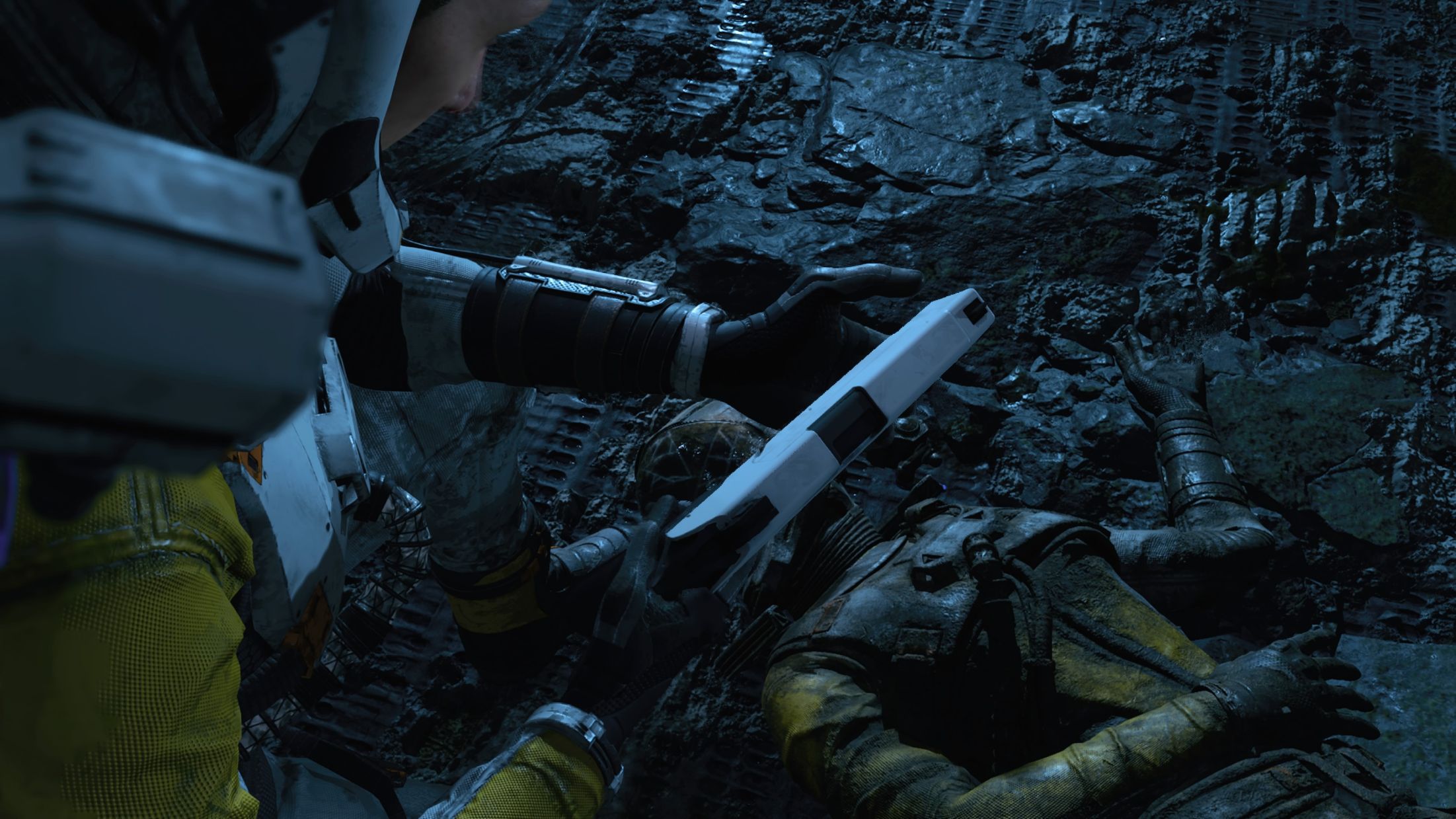 Yes, it's your corpse. Your gun sucks btw.

The game runs in stable 60 fps, and it uses dynamic 4K resolution. Stability of fps came with the cost of having dynamic resolution, which in the end doesn’t affect too much on the screen as the main focus is action and not the graphics.

If you ask me the graphics in this game is not that great, even in animations and even the protagonist feels mediocre. Let me repeat; we are here because of the gameplay and not the graphics. Gameplay is pure gold and I really want to emphasize that fact.

Meet Selene. She is our new heroine in the world of aliens, certain death, and many guns. Every time Selene dies, she starts from the first plane crash scene and into the planet. Why is that? The story will explain this to you, although I feel like they could’ve done a better job. I’m still a bit confused about what happened and why am I in a loop, but overall, I feel pretty satisfied after hearing all audio on the way (recorded from Selene in loops in between dying) and completing the story segment. The vibe is horror-like, dark, and mysterious. It felt really tight, and it perfectly sums up the whole “feel” about the game.

I dig the music, atmosphere and whatever they tried to present as a story. Maybe mainly because this game is tough as nails (so you appreciate every bit of progress)! 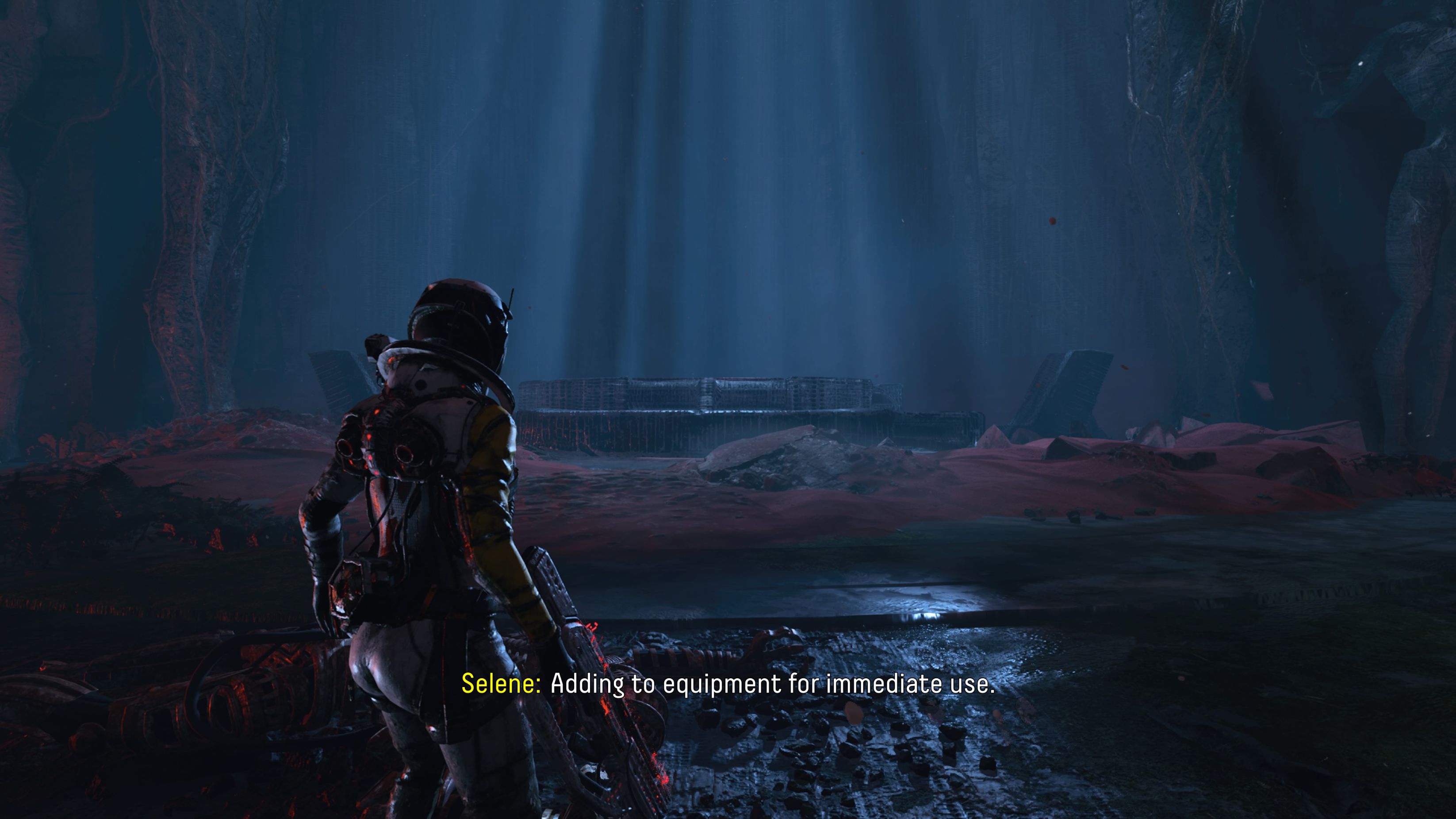 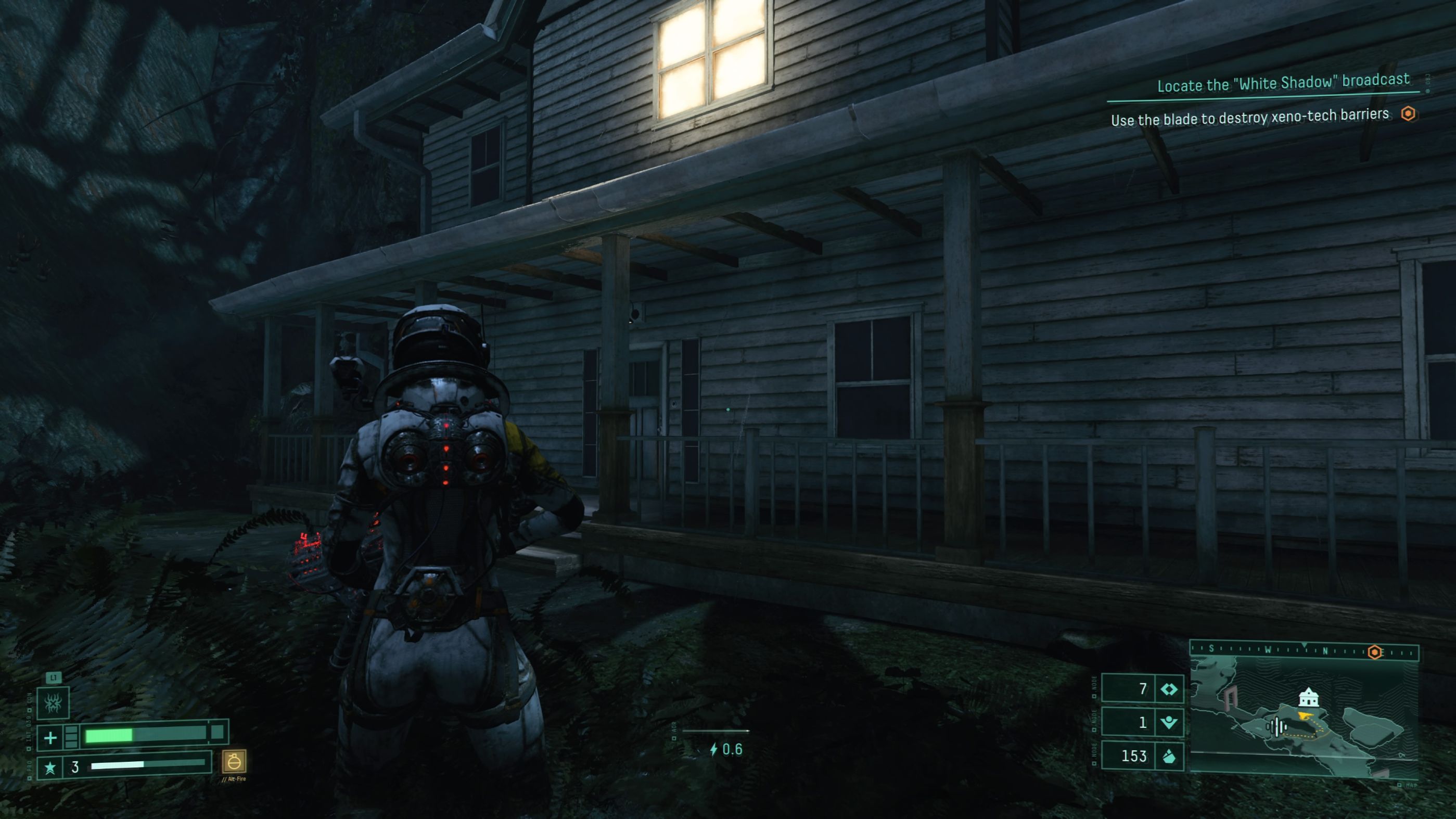 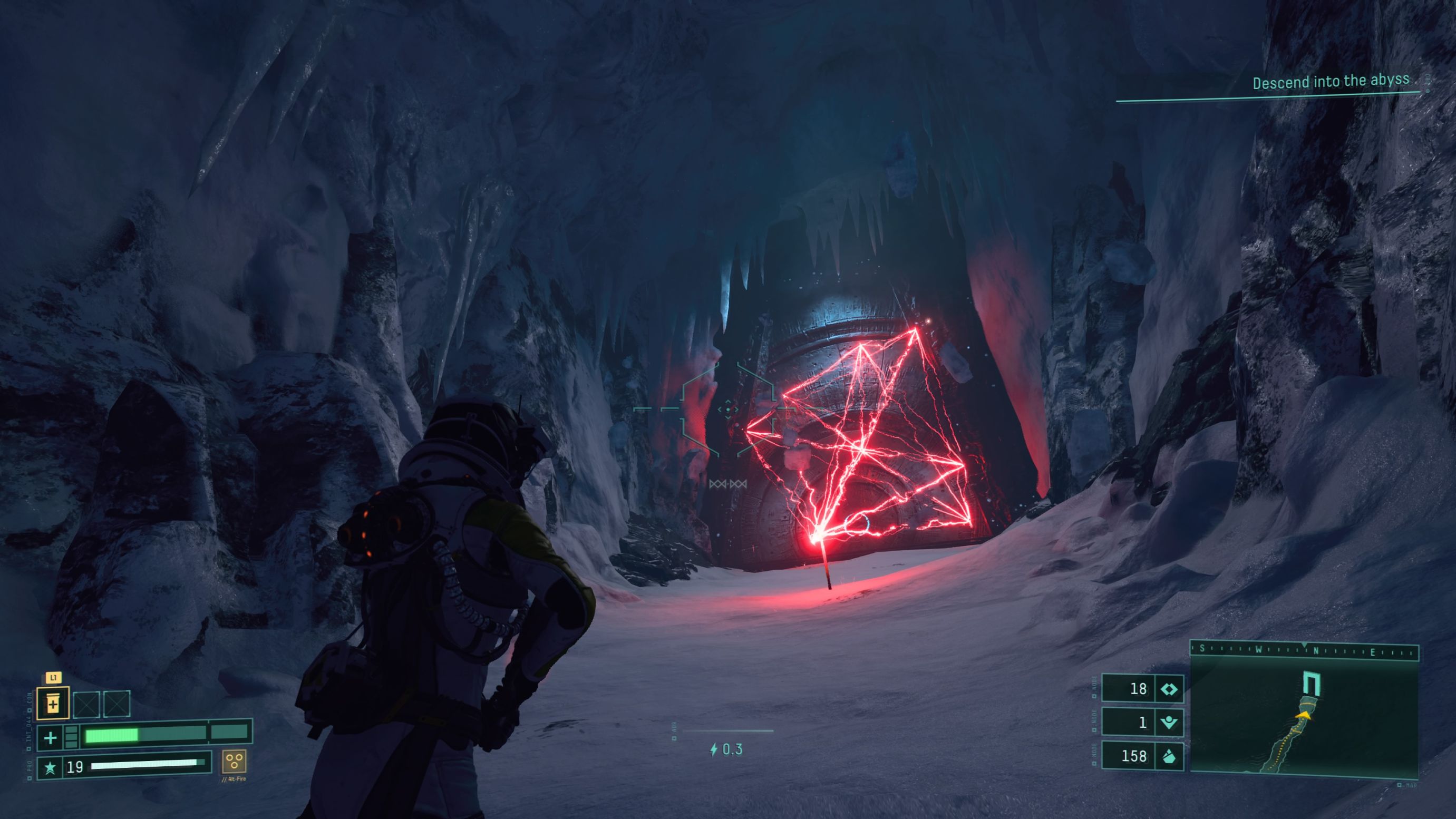 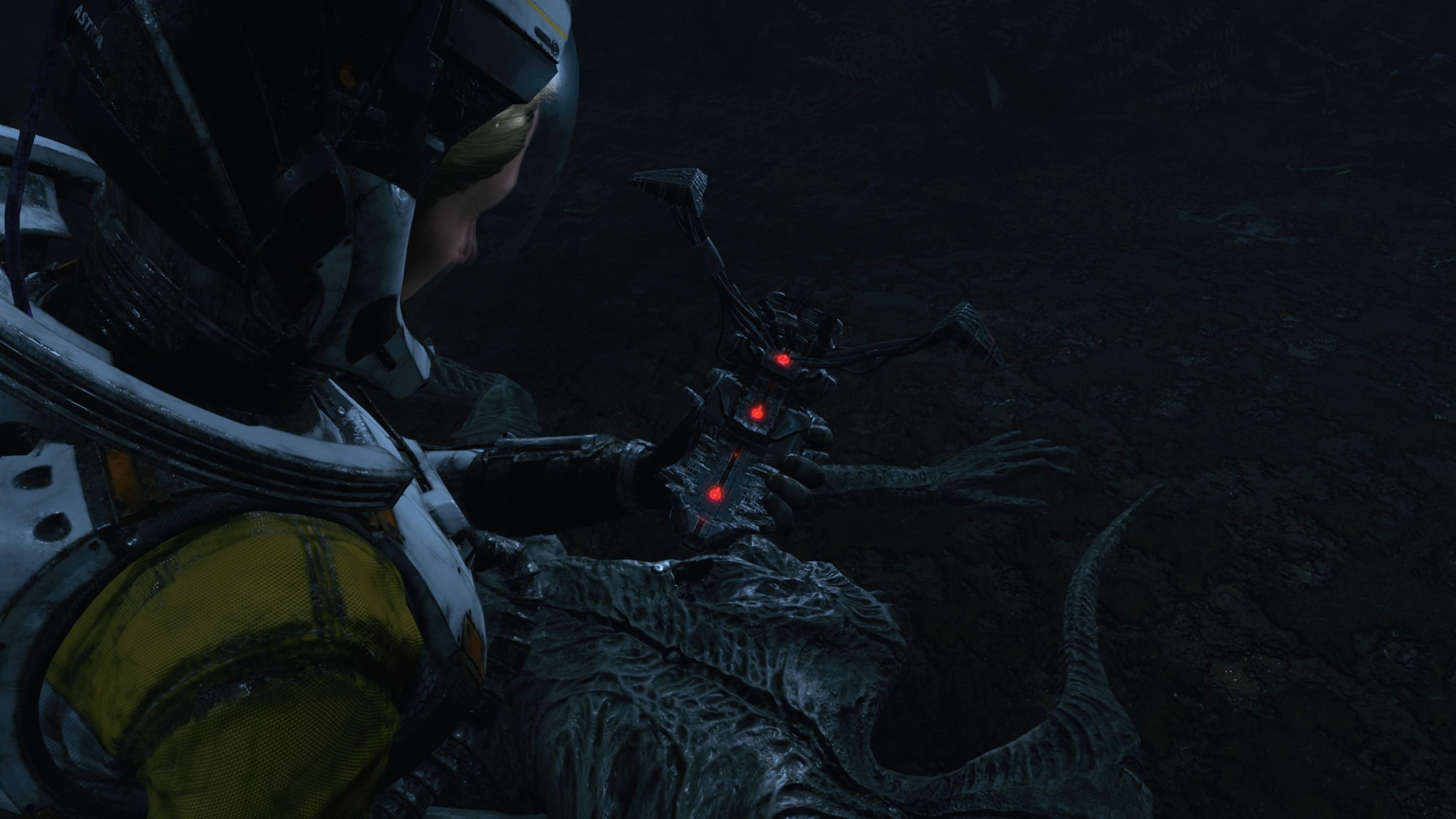 Game parts related to story and progress are decent. I enjoyed the cutscenes and the "feel" this game radiates. I felt that progression rewards you enough, and it feels good after beating a level (and the boss)

Prepare to die. A lot. At least at the beginning. As soon as you crash you are free to enter the forest and try to go through. Easier said than done. You will be greeted with simple, short tutorials, unlock first weapon etc.

And that is it, you are now ready to conquer what is in front and survive the horror of shooting colored balls flying, nailing your health on touch. This is what Returnal is about. Almost every room (that appears randomly btw) during your runs (run is considered a playthrough in between your deaths) is filled with some monsters, simply some platforming scenario where you need to be fast before platforms disappear, or just trying to pick up items while avoiding deadly lasers. I loved the concept; it feels fun for a long run even with constant dying and repetition (which is normal for this genre).

A pinch of random rooms, different enemies and collectibles that are in certain rooms will drive you forward. I loved learning about Selene and listening to her old audio logs. It felt freaky. Every time I died, I was a bit furious, but you will get better during runs, especially when you unlock some permanent upgrades that will save future time and open some needed shortcuts. Dying means getting better and getting better means you will beat the game in the end. Just don’t quit, it’s not really that hard. 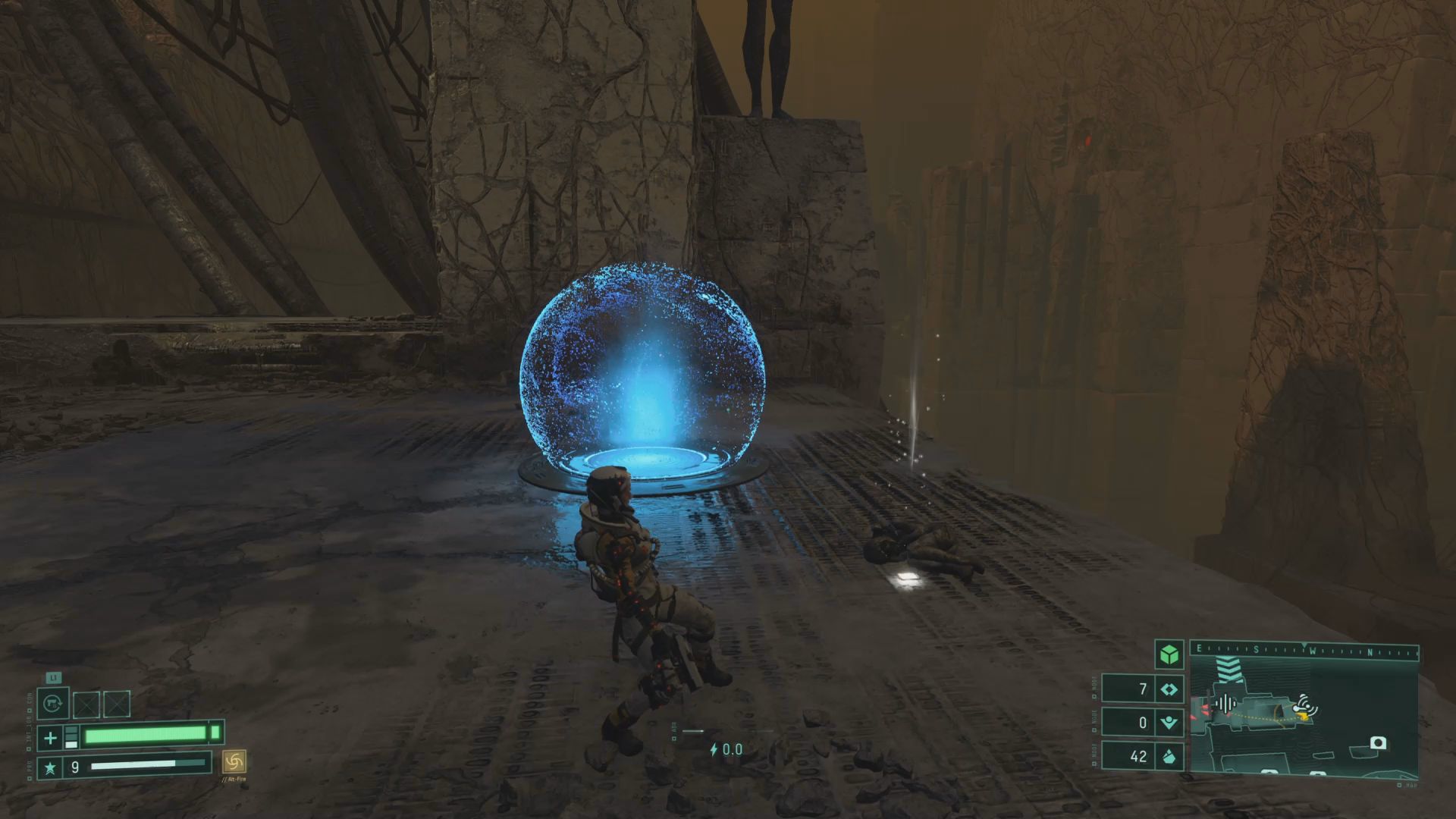 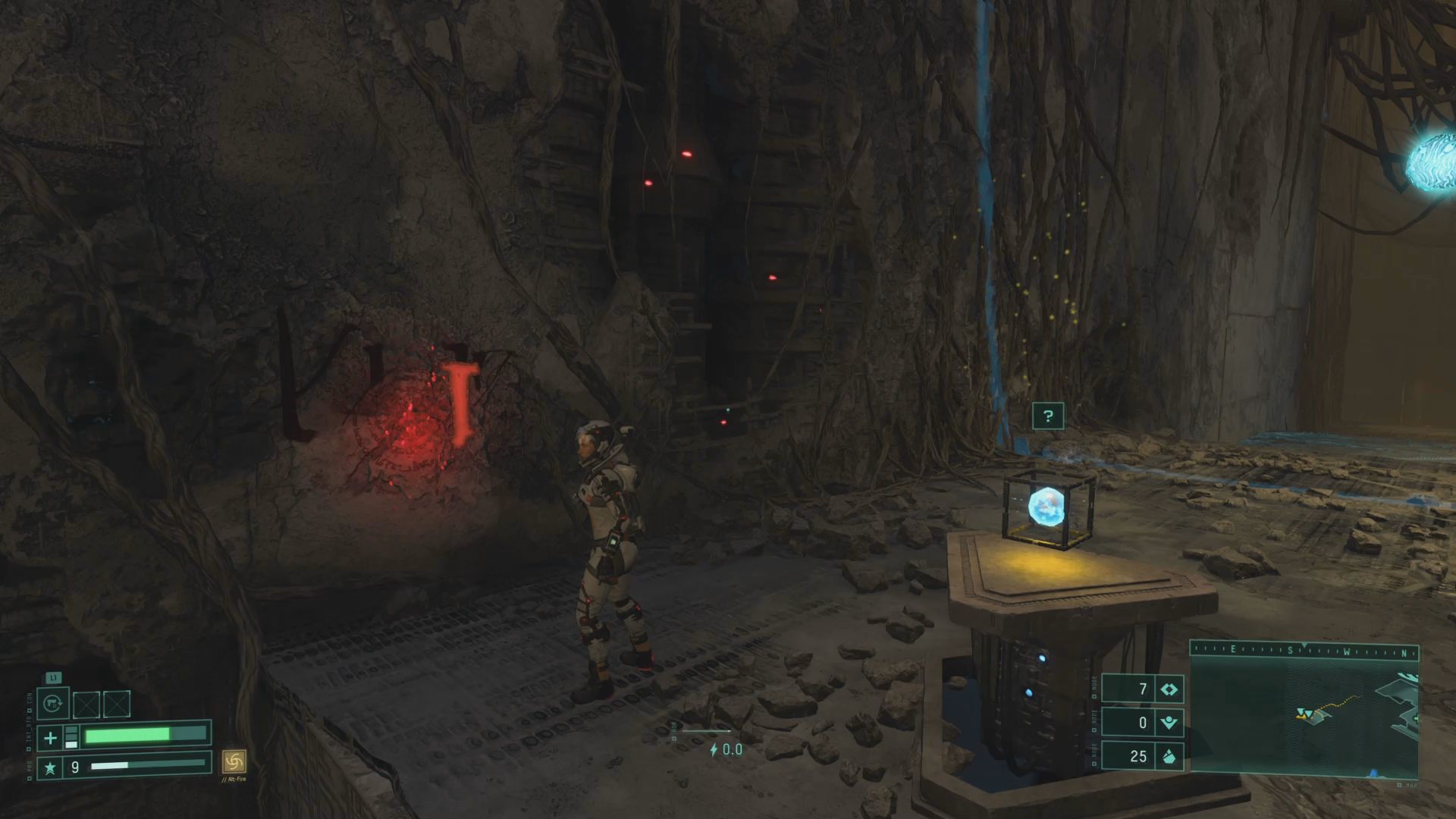 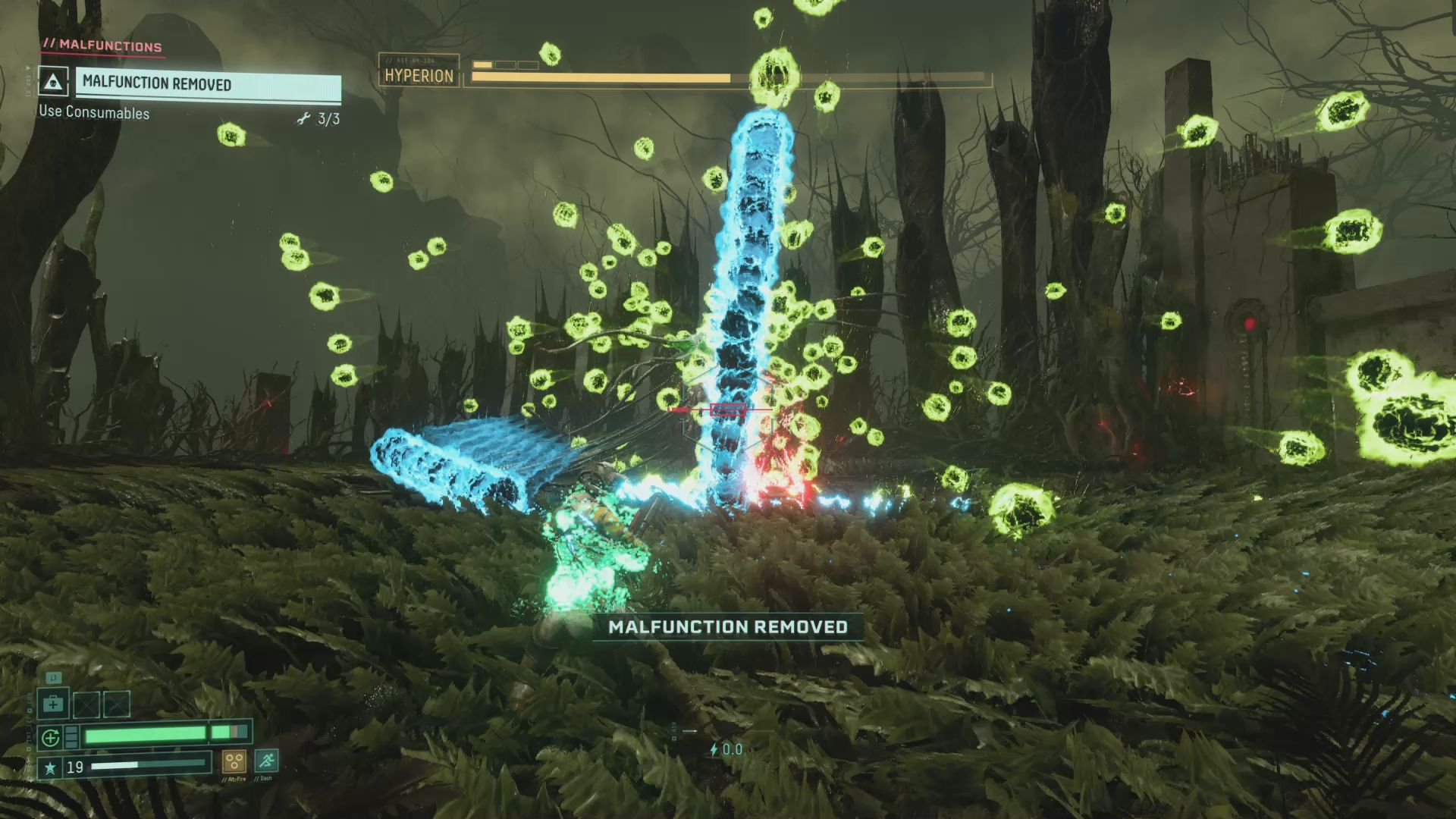 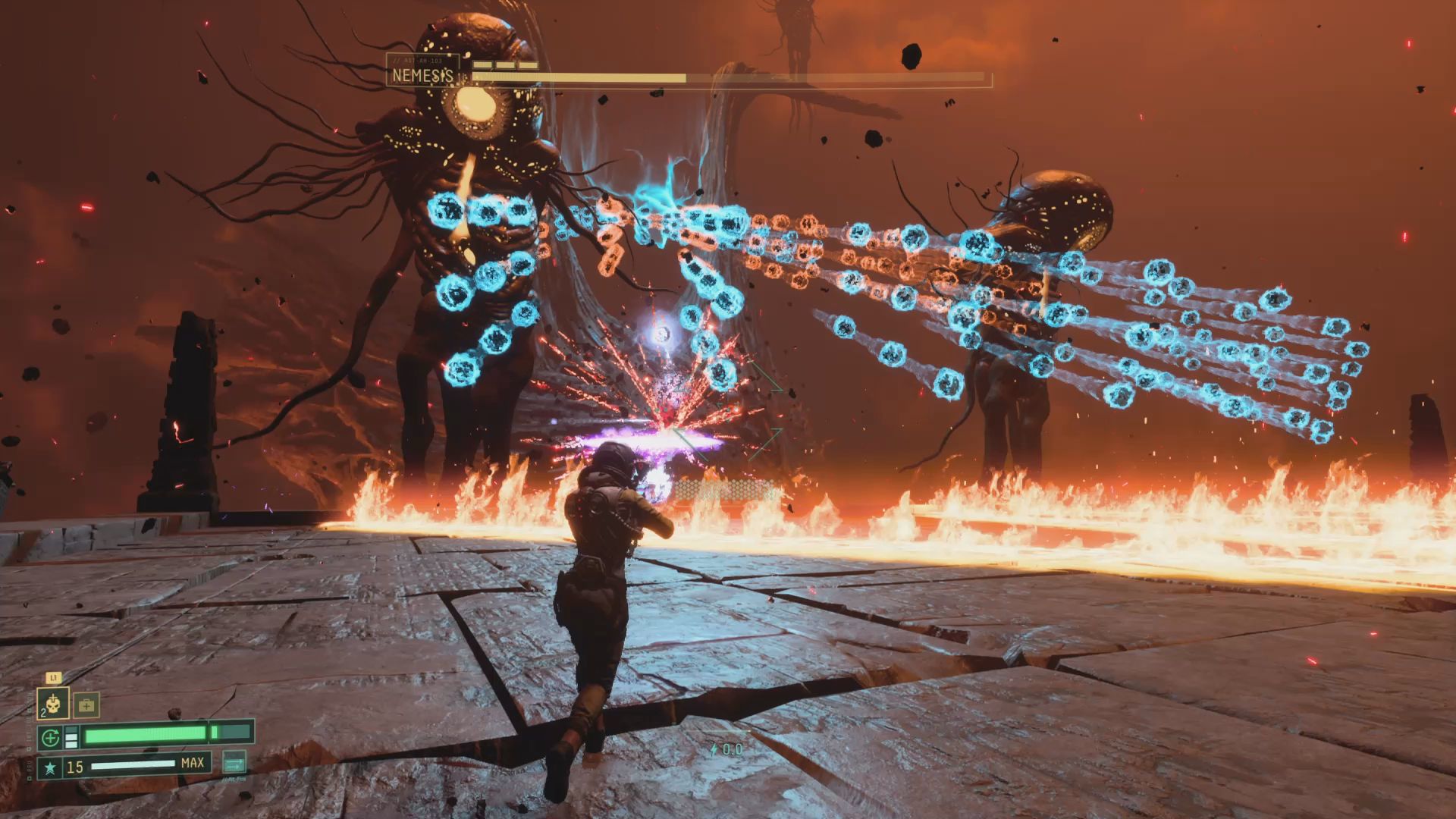 Prior to latest patched RNG was a *itch. Now, everything seems to appear every few runs. The good things are the shortcuts and the fact you can just run and restart runs until what you need spawns.

Progressing further unlocks new weapons (10 types of weapons are available). That means it’s mayhem time. Some weapons are indescribably good and satisfying. Hollowseeker is maybe my favorite weapon, although Electropylon Driver is the most overpowered weapon you can use. It makes your runs almost easy. The idea behind weapons is to use what you prefer and unlock different weapon Traits and special attacks (plus to raise their levels) so that during your runs you get stronger variants, thus making the game easier. It’s still random, and I hate random, but there are at least 5 weapons I loved, which made the RNG bearable. You die, you need to get the weapon again (of course, all traits on that weapon are RNG as well).

Beating Biomes (consider them as levels) means you’ve mastered them, defeated the boss and you can now use the shortcut to “jump” from Biome 1 to Biome 2 for example. I can’t even describe how much I’ve wanted this. Playing Hades from the start all the time was a real pain. Here, you don’t even need to beat enemies in rooms except when it’s lockdown. This is a big win because the game doesn’t control you but instead it gives you the “tools” to use them as you see fit. That is what made the game fluent in my eyes.

Since I’ve said “fluent”, it’s what describes the combat. Movement, dodge, and gunplay are simply one of the best I’ve experienced. I had so much fun shooting aliens while trying to survive (sometimes 1-3 hits mean you die), every run was different. After 30 hours I was still hooked to its core. Remarkable accomplishment. I’m really satisfied how well the gameplay is executed. So responsive, fast, and purely skill dependent. 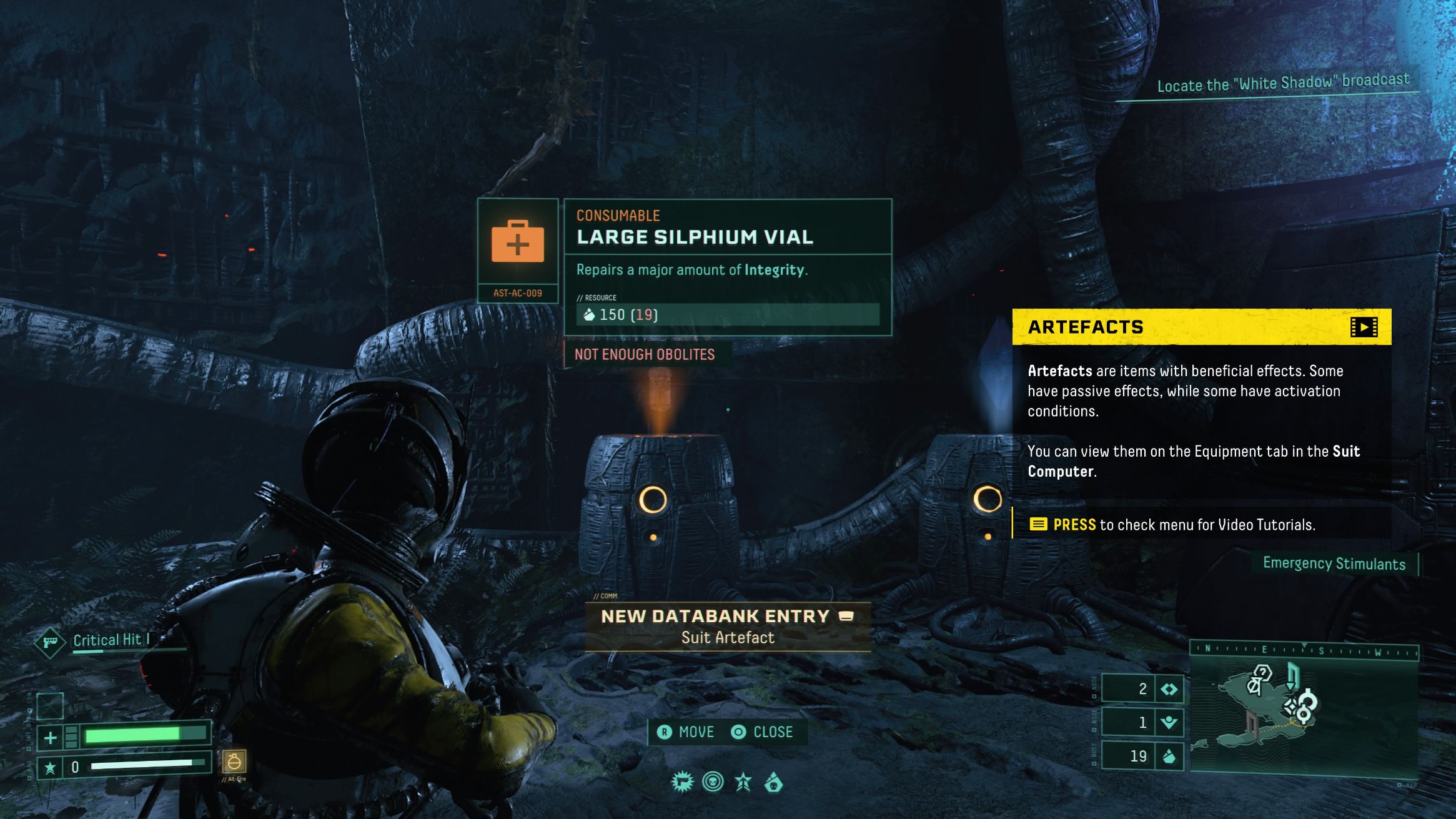 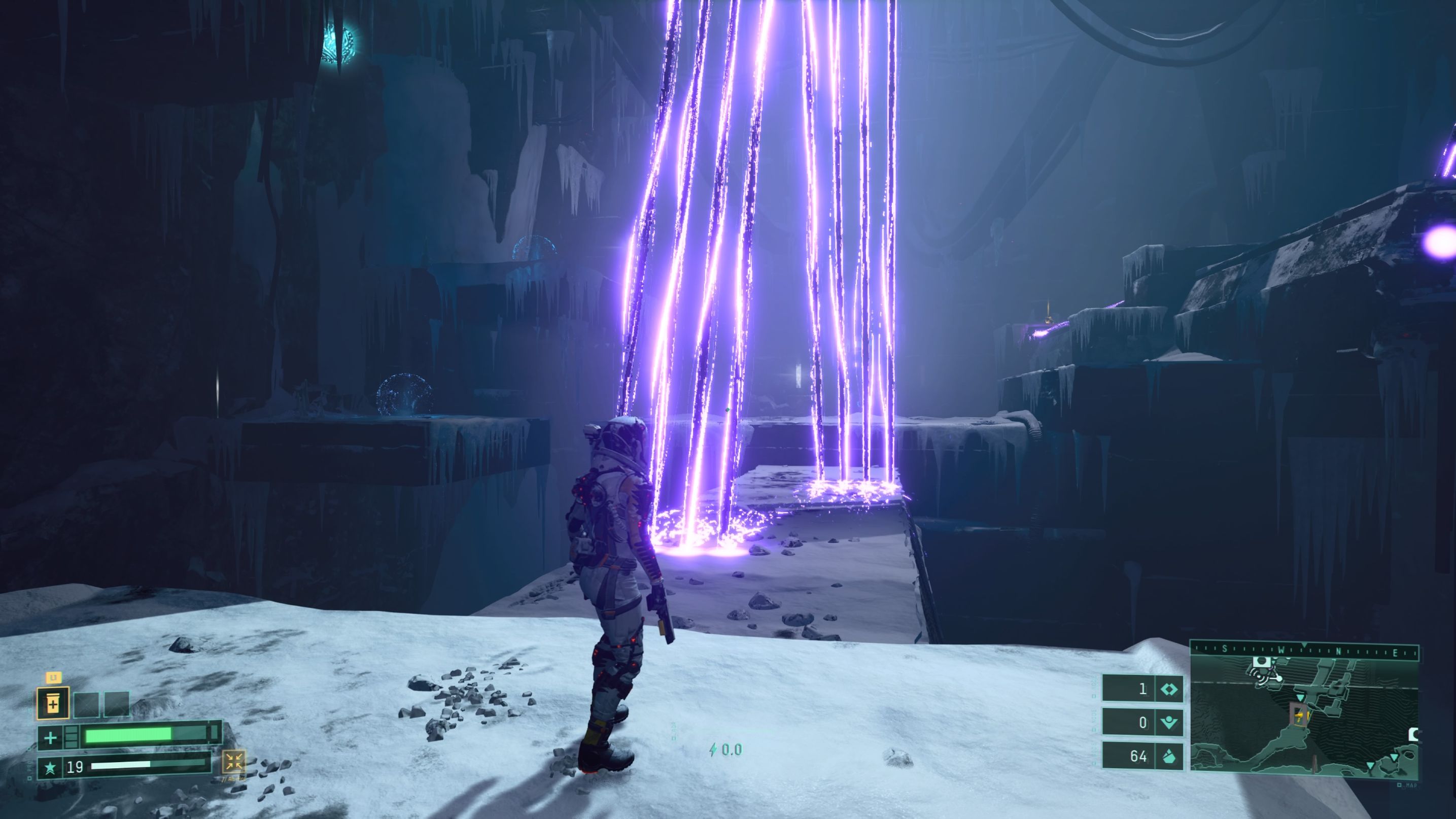 All aspects of the game are good. Climbing, grappling, avoiding lasers while trying to recover small health chunk by collecting healing items... It's impressive how fluent the controls are. If that wasn't the case I would never manage to avoid so much what comes in your way. Loved the melee kick (don't have a picture, sorry)

I also need to mention other game mechanics such as weapon proficiency levels. Starting from 0, they go up to 30. The higher the proficiency level, the more damage you do. Finding weapons when you have higher level means you will find powered weapons that adds to your base damage (plus better weapon traits). Killing 3 enemies raises the Adrenaline level; think of them as a boost in a form of different bullets, stronger bullets. When you get hit, Adrenaline level is reset. Combining adrenaline with some boosts you can pick up is the best combination.

You of course raise proficiency level by defeating enemies and picking up adequate items when they appear. It’s all marked perfectly on the map (great map in this game, kudos for that) so you don’t have to explore all parts during your runs. When you start from 0 and use the shortcut to reach other regions by skipping the ones before, you will get +5 weapon proficiency at the start. This is exactly what I miss in Hades. You die, you run towards shortcut (also marked on the map as a door with different icon), skip Biome and continue from the one you still need to beat.

After patch 2.0 all problems that were present until then went away. Since you have 6 Biomes to beat you would expect to have some kind of save on some point, right? Before 2.0 patch you had to put your console to rest mode without closing the game, otherwise you lose all progress if you hadn't progress up to Act 2 (Biome 4). How screwed up was that? Now you can use the „suspend cycle“ option, close the game and the console. Next time you turn it on you just continue where you left of.

Also, worth to mention – RNG is fixed after 2.0 patch, which means rare rooms with some collecibles will appear more often. I collected everyhing during 30 playing hours. Blessed be the shortcuts! Reading Xenoglyphs - not so much.

And last thing to add... Artifacts. Think of them as random perks that are active during single run. You can unlock new items and artifacts by finding key item cubes and inserting them to appropriate slots. This expands your luck further by giving you change of getting better things.

Artifacts can raise weapon damage, or give some great additions such as HP leach. HP leach is a game breaker. If you get Adrenaline Leach artifact consider yourself lucky. When you get your first adrenaline level you also activate that passive skill and drain HP of enemies (while replenishing yours). Since you can buy only few items for healing in a single run (and that requires crystals dropped by enemies or picking them up), this means a lot. Still, if you suck at dodging, it doesn't help much in that case.

Other mechanics worth mentioning are leeches; they can raise some stats, but lower the other (or some other stuff). We also have contaminated pickups that can inflict malfunctions. Malfunctions can be reverted by meeting goals of each (killing 20 enemies for example), or by simply using items for that cause. They can lower your health for example, so you want to get rid of them fast.

I just mentioned what you can expect from this game, and it took a lot of letters to explain all of that. Add sword to your arsenal as a permanent upgrade and you have a dynamic game that will provide endless hours of fun. I approve what they did here, there is much to take into consideration and you can't really abuse some mechanics. Making different builds is a bonus of RNG, but at the same time it can cost you some hours. I just love the colors! Boss fights are awesome as hell! When you see green bullets in such a lovely environment, it just feels good. My eyes are happy (not from playing this non-stop though)

I can sum this game as an almost perfecly balanced game when it comes to gunplay, combat and the whole gameplay, with a pinch of good atmospehere and compeling story. As a hater of losing progress every time you die, I can say that this game balanced permanent upgrades really well, while not ruining the game and its level of toughness.

Don't quit at the start; it really gets easier later on. You just have to learn the patterns and find your favorite weapon. After a while the enemies will fear you, not the other way around. If you want something new, fun and challenging, Returnal is your hidden gem. I don't really know what I dislike here, but if I had to choose, I would say the game needs more enemies, bosses and their movesets. And more levels - not just reusing first 2 levels while using different weather conditions and such.

Return, y'all? Yes, we shall return often.

"Best roguelike game I've played so far (well, best out of 2). For those who are in love with the genre and love the challenge, and for those who will maybe become one after playing Returnal. Strongly recommend."