Review | Sword and Fairy 7: Together Forever

"A world of Deities, Human Demons, Humans, Demons, Spirits, different Realms and all of that packed in a single fantasy RPG with mythology references that occur often as you'd think so? Sign yourself up please!" 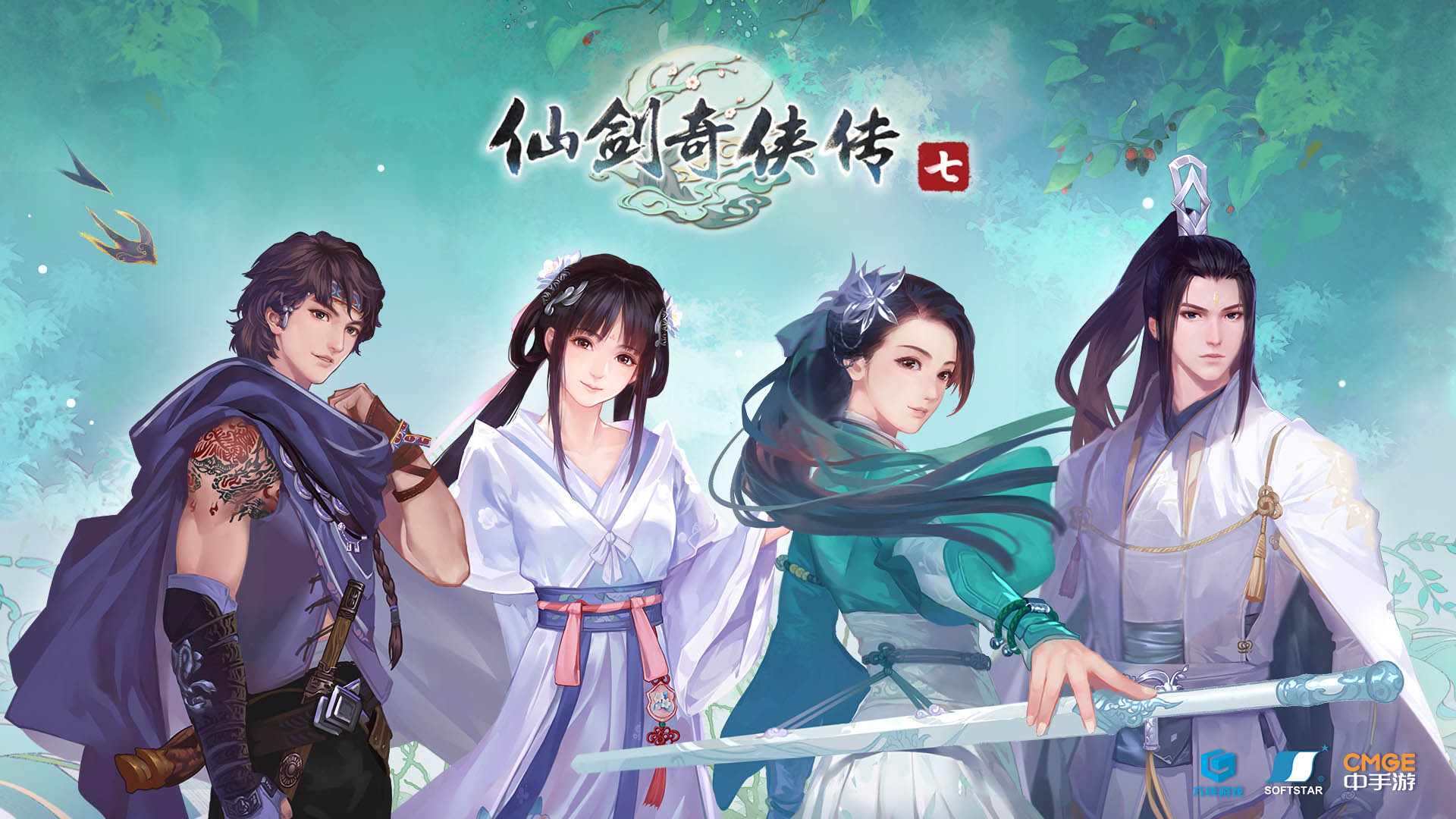 How often do you play Chinese games? This is I guess my second one so far. And for a second game it felt awesome and utterly beautiful!

The Legend of Sword and Fairy is a long-running franchise; to be exact, Sword and Fairy 7 is the ninth (yeah, ninth) installment. It’s developed by Softstar Beijing, China Mobile Games & Entertainment Group Ltd. Funny, my first Chinese RPG was Xuan-Yuan Sword 7… Guess who is the developer? Softstar of course! No wonder why I wanted to play this one as soon as I saw the trailer.

PC gamers out there were lucky enough to play Sword and Fairy 7 on October 22, 2021, while PS4 and PS5 versions just came out on August 4, 2022. And not even at full price! Unfortunately, only PC version comes with Raytracing options (although only for certain graphic cards), while PS5 version doesn’t, but it runs in 60 fps and in 4K. 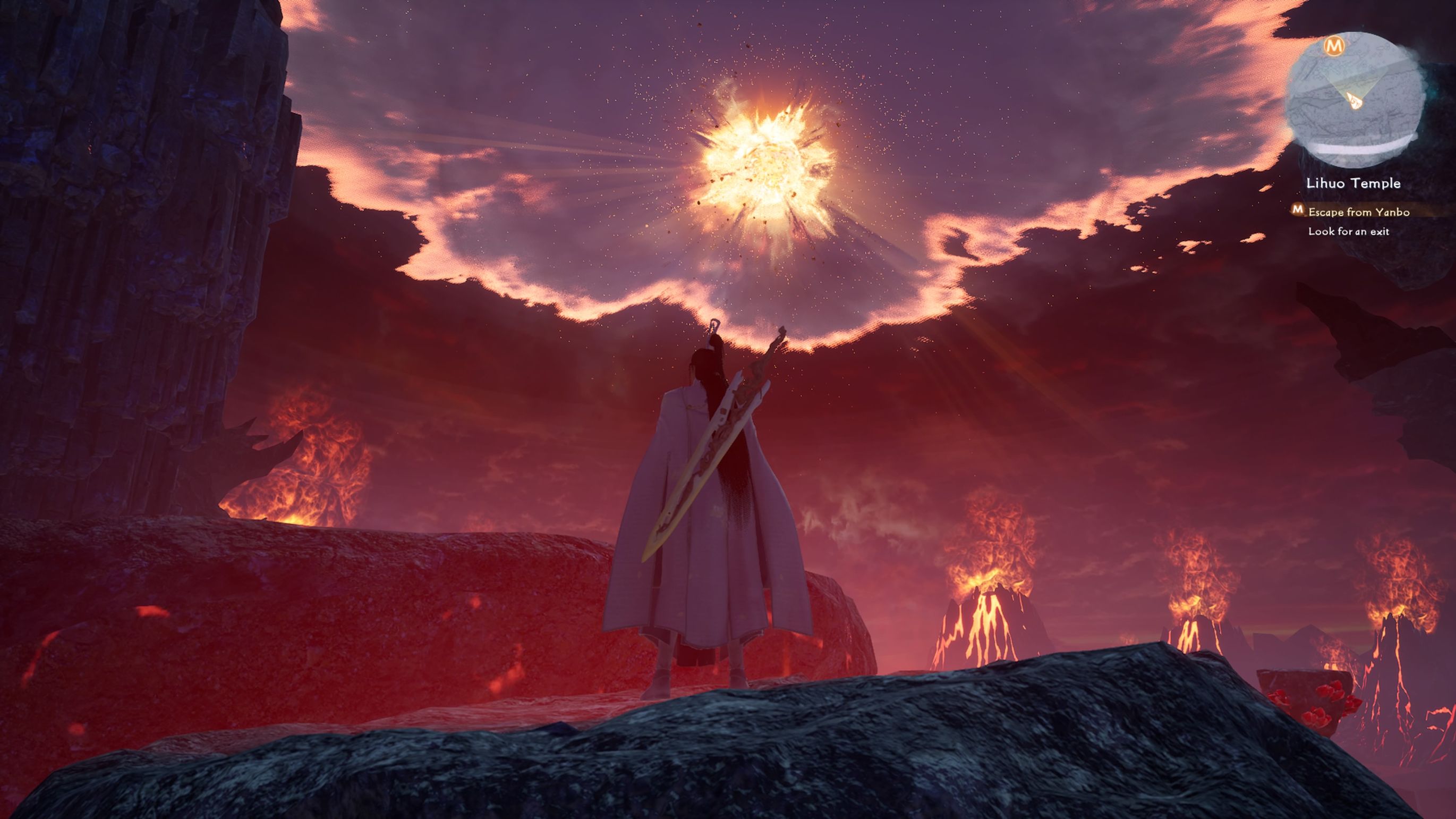 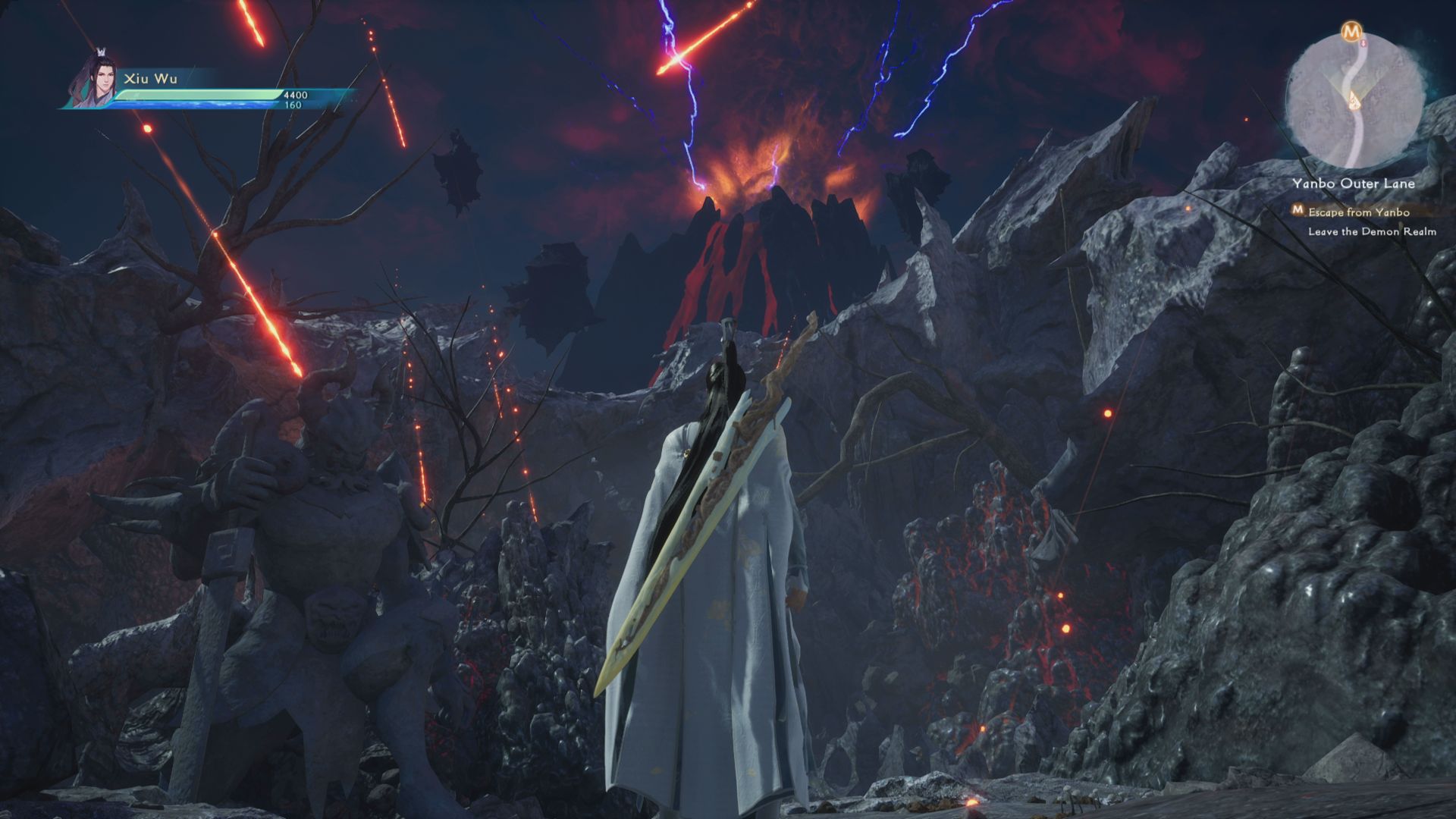 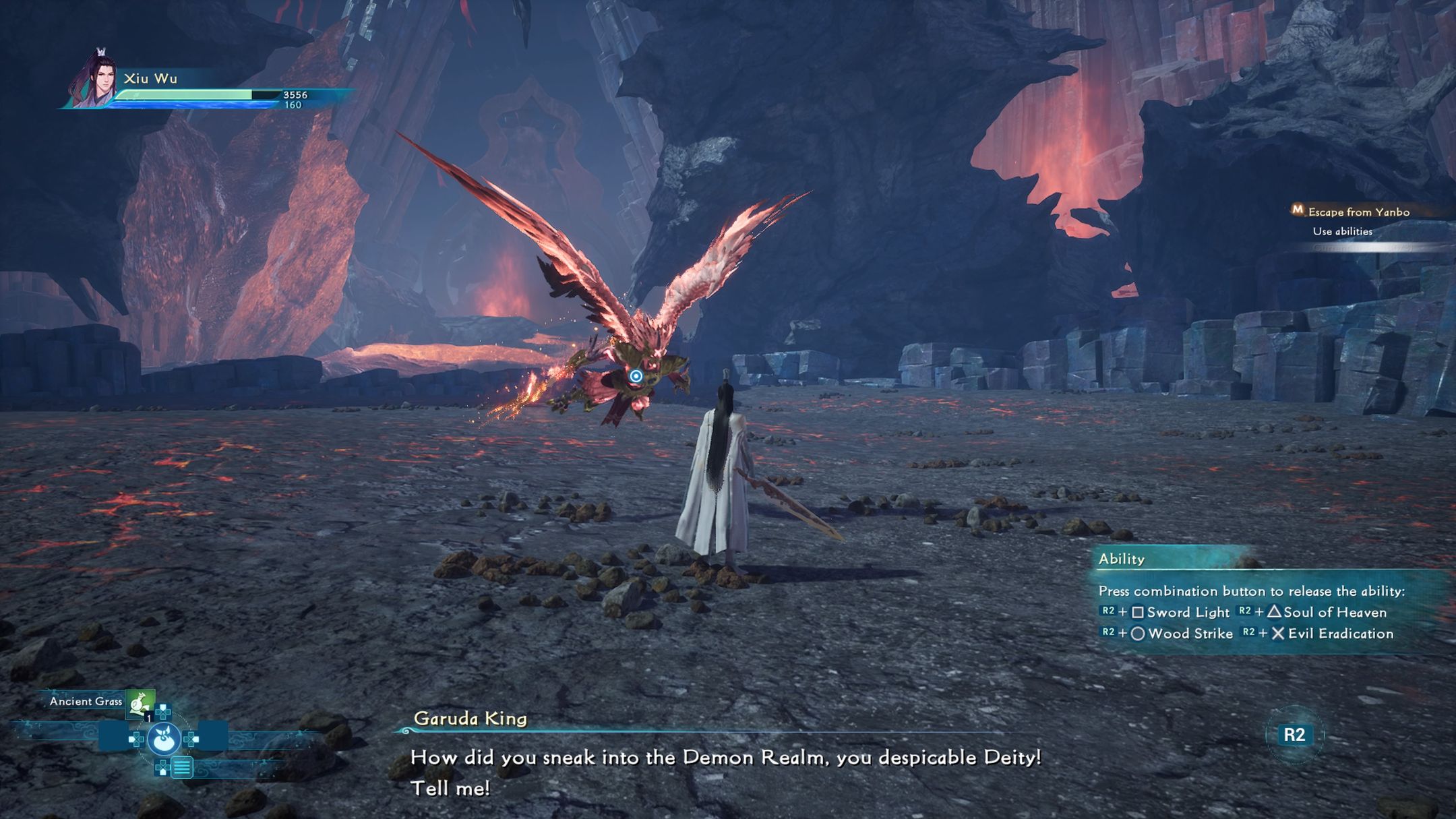 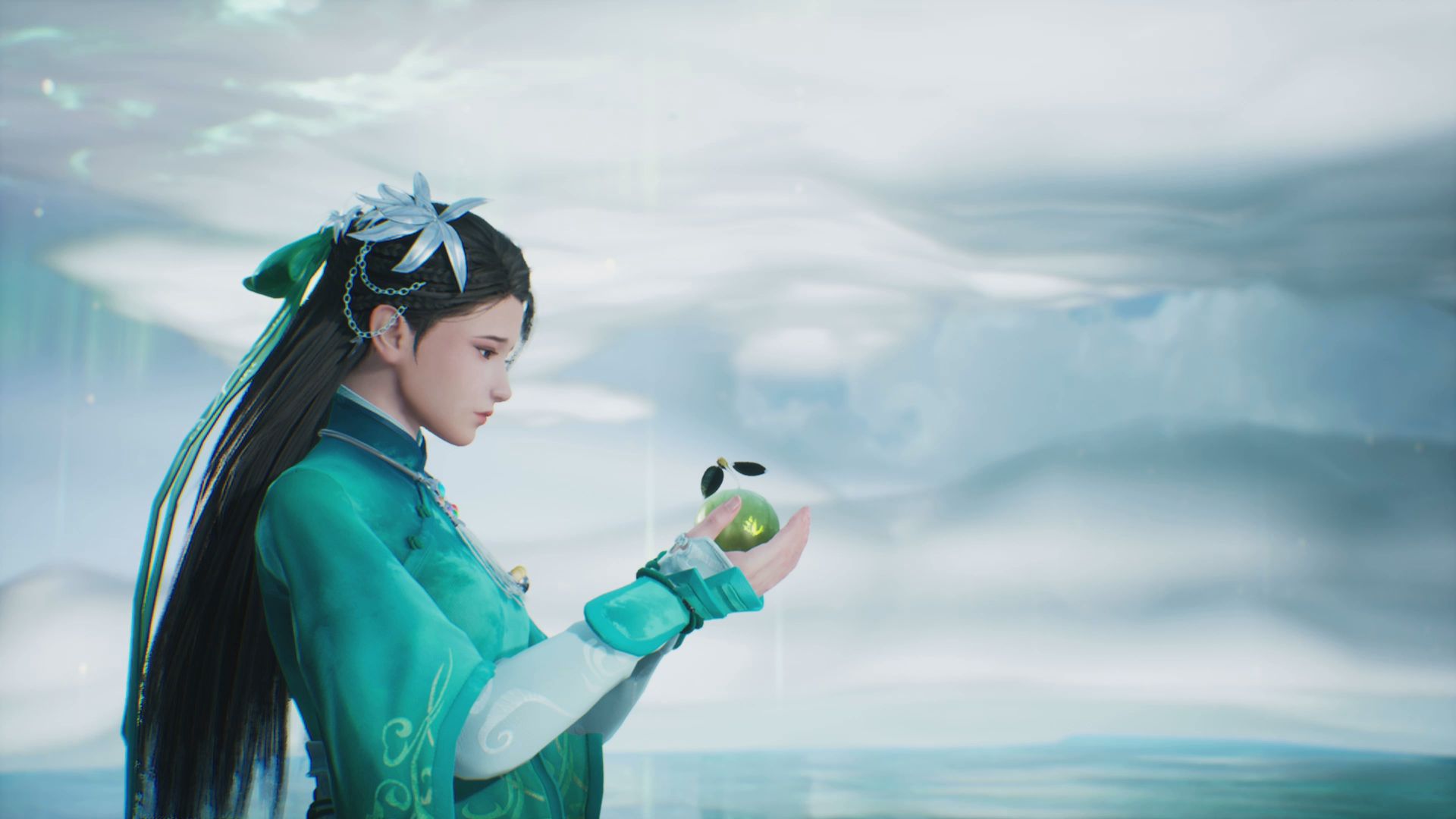 It never looks bad! This game is a real eye-candy. It all starts with the apple, and it all ends with one. The journey is full of fantasy content and uniqueness

As mentioned, this being the last, ninth entry in the franchise, is it mandatory that you’ve played the first 6, prequels and spin-offs? Well, timeline takes place years and years after the 6th entry. My only problem with following the story was a huge entry challenge in a form of so many terms and beings across different realms set in the beautiful world of Sword and Fairy. You might find the story overwhelming, rather complicated. I had to focus really hard and even then, I was a bit lost. That is the reason why you should’ve played prior games, but we have Google now! I guess I need to learn more about Chinese mythology.

Another big change is that the former games were kind off turn-based in its core, and this one is an action RPG. I saw some reviews for Sword and Fairy 6… Let’s just say I wasn’t so impressed with the bad frame rates and clunky real-time-kind-of combat. Also, when you compare the two, are they really the same thing? I’m saying this as when you look at the graphics now, it’s just… I have no words to express how beautiful a game Sword and Fairy 7 is. 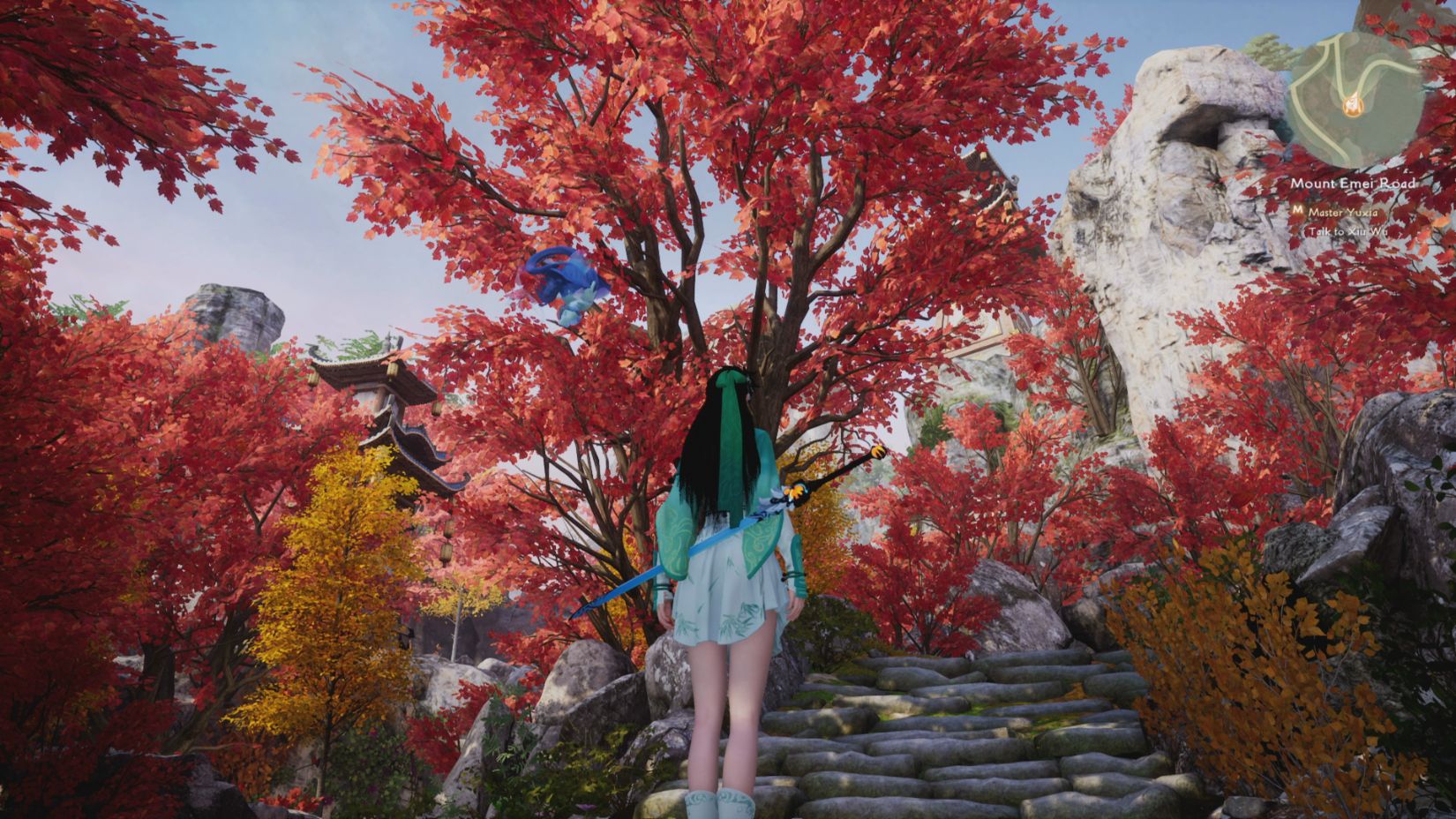 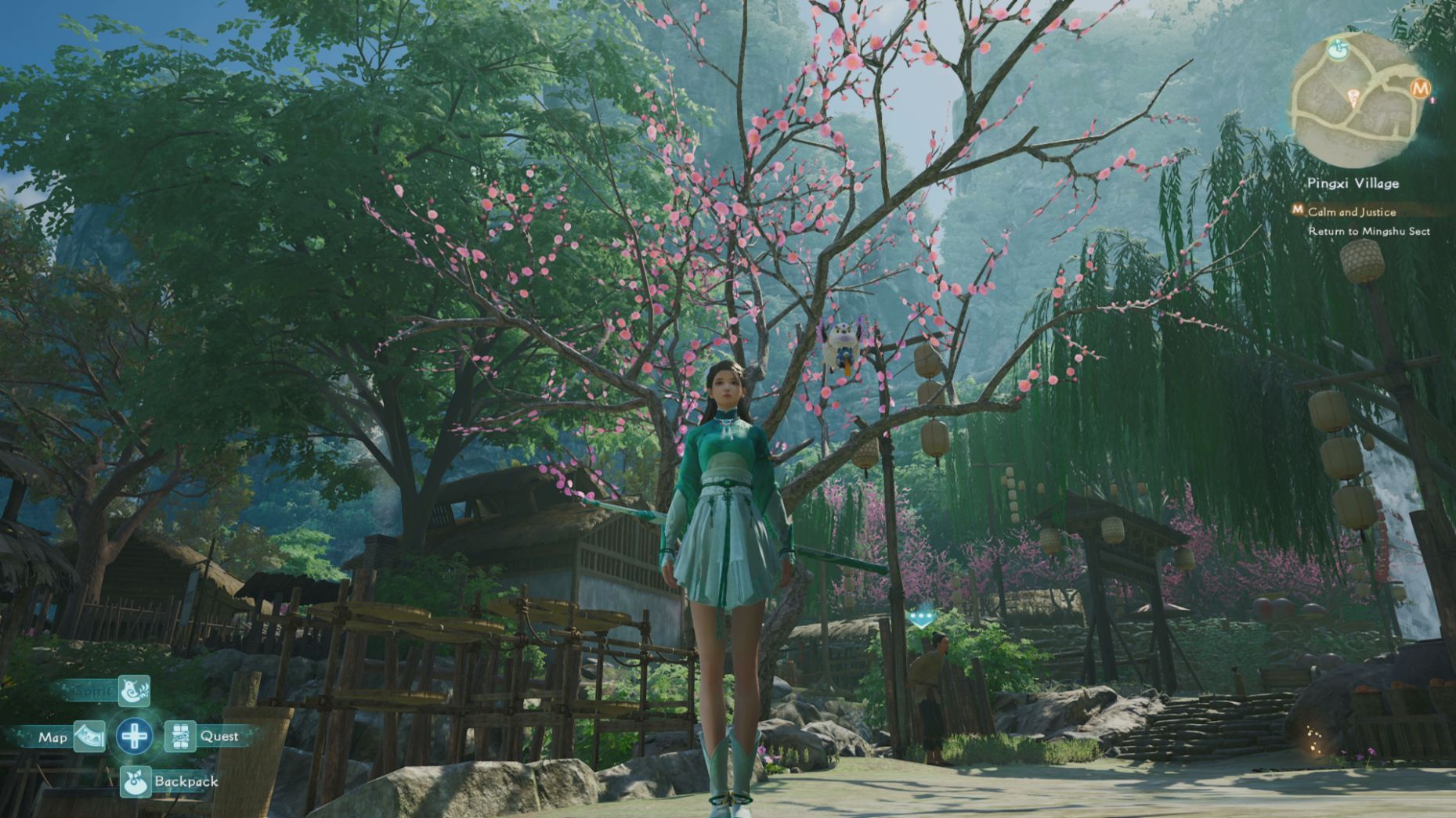 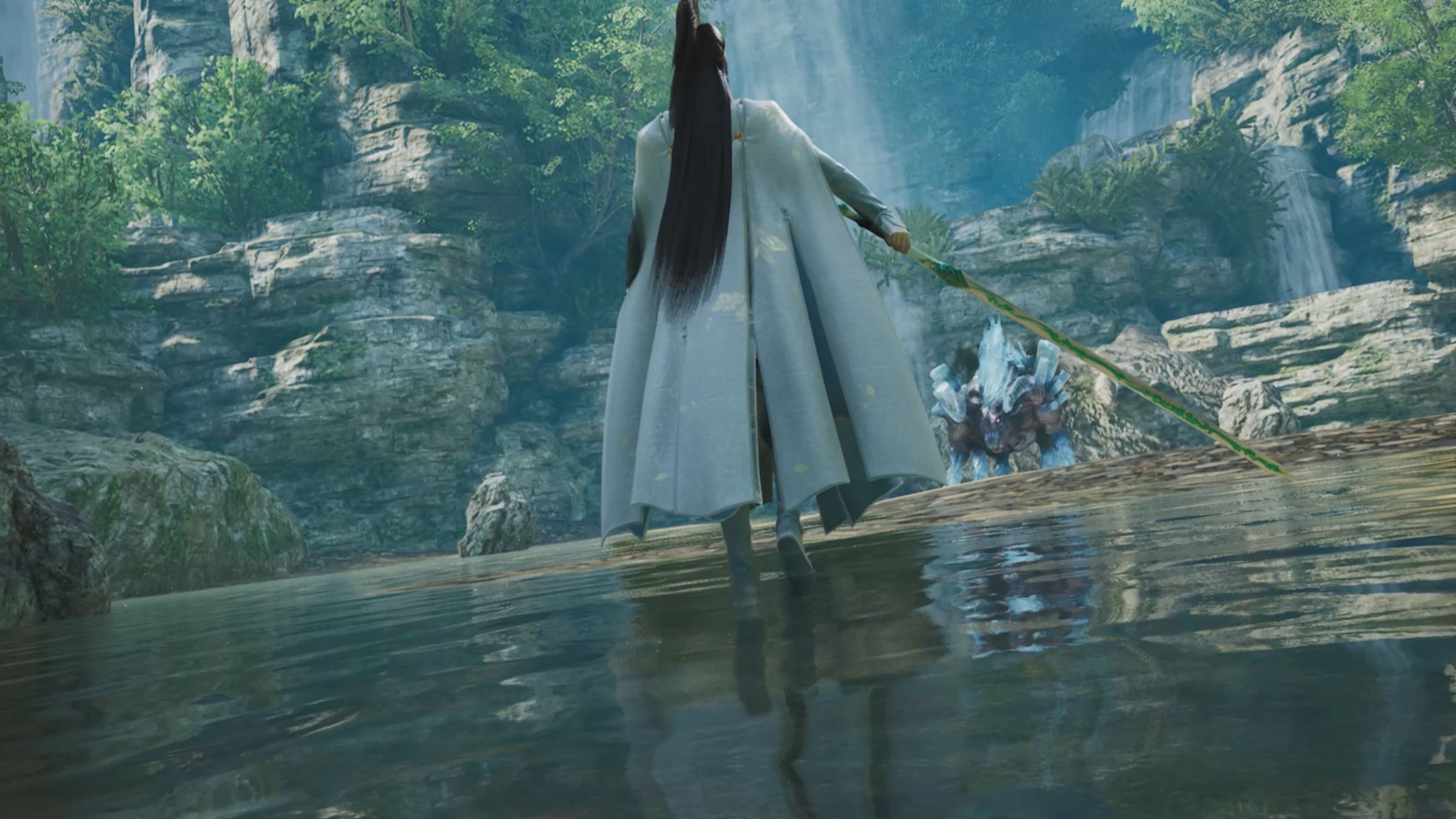 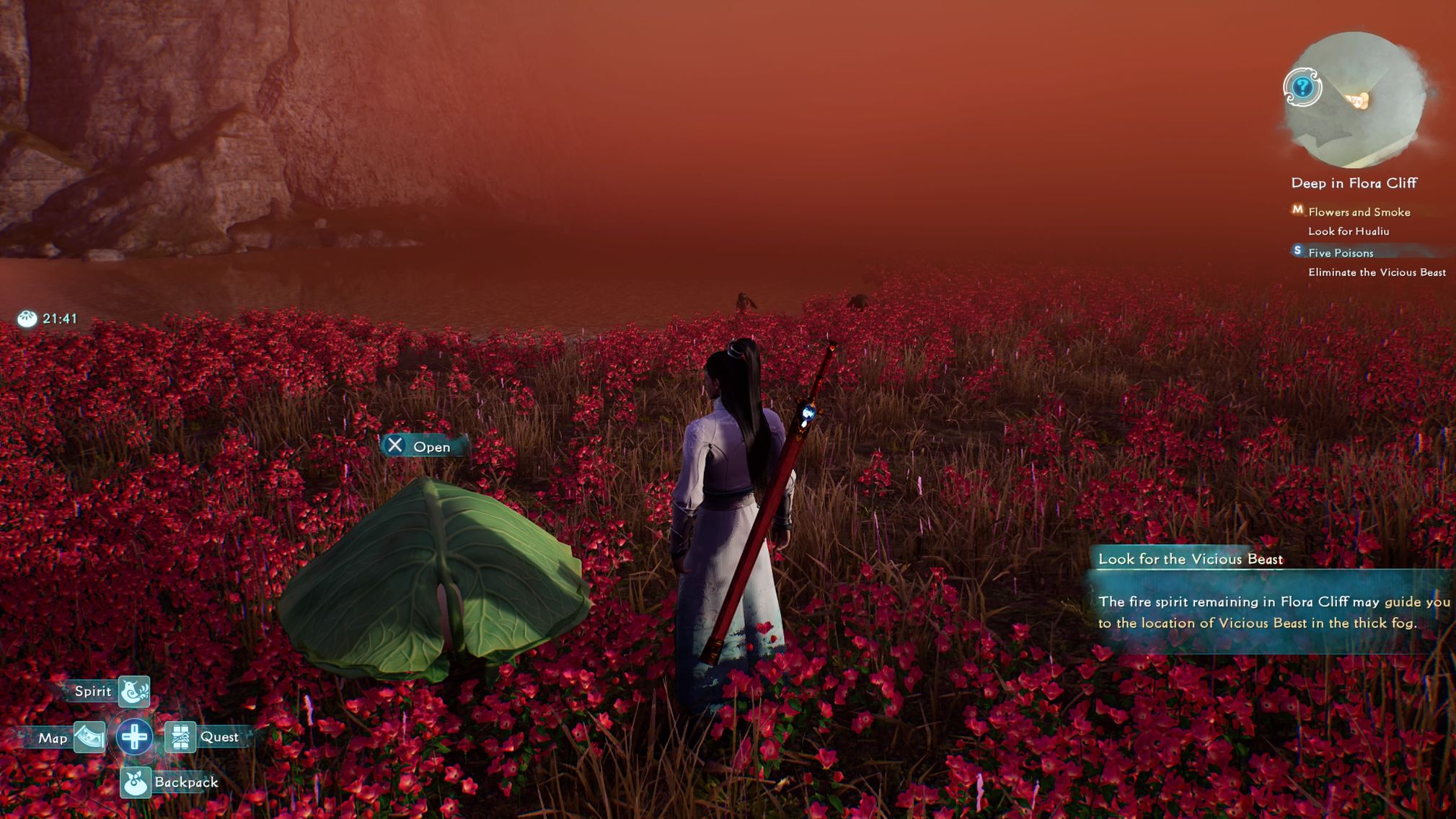 I don't have enough words to use all screenshots that I've taken. There are just so many landscapes and situations where you'll use that screenshot button. And how can one not want to explore such a beauty?

Cast is good. Party of 4 fits perfectly into a somewhat linear experience. I love this kind of approach for a couple of reasons; main one being that the developer can really focus on the art side of the game when they have less ground to cover. Open-world games these days just multiply the content. Nothing feels unique, fresh, it’s getting really stale. Here, we have around 15-ish locations, and they all look different from each other, with a dozen of small details that just gives a serious impression of the game overall.

I don’t want to spoil much in the terms of storytelling, neither I can - I need to google some parts to even understand them, but I will say one thing… The game is full of animations. There is a ton of conversation between the party and people across the realms. I missed that in RPG’s. How a Deity fits in the Human world, who is the Divine child and will the cute protagonist fall for the Deity while saving the world (well, certain realms) is up to you out there to find out. I will just say that I loved the story and the characters, although I felt like they lack certain expressions in cutscenes, which left me a bit disappointed as I never fully “bite” into the part where you bond with them all the way. Still, having dub in almost all scenes is something to praise. Just beware, English titles, Chinese audio (I kind of love it).

Displaying such a diverse world in 4K, 60 fps, even without the ray tracing; that is something to praise repeatedly. Honestly, I can’t remember when I was playing a game that has such good graphics. I’m not interested in graphics at all when I review games, but man, I just must mention this, and I must say, I love when a game looks as good. When you offer such a spiritual OST combined with such beauty and awesome worldbuilding, you score big time. 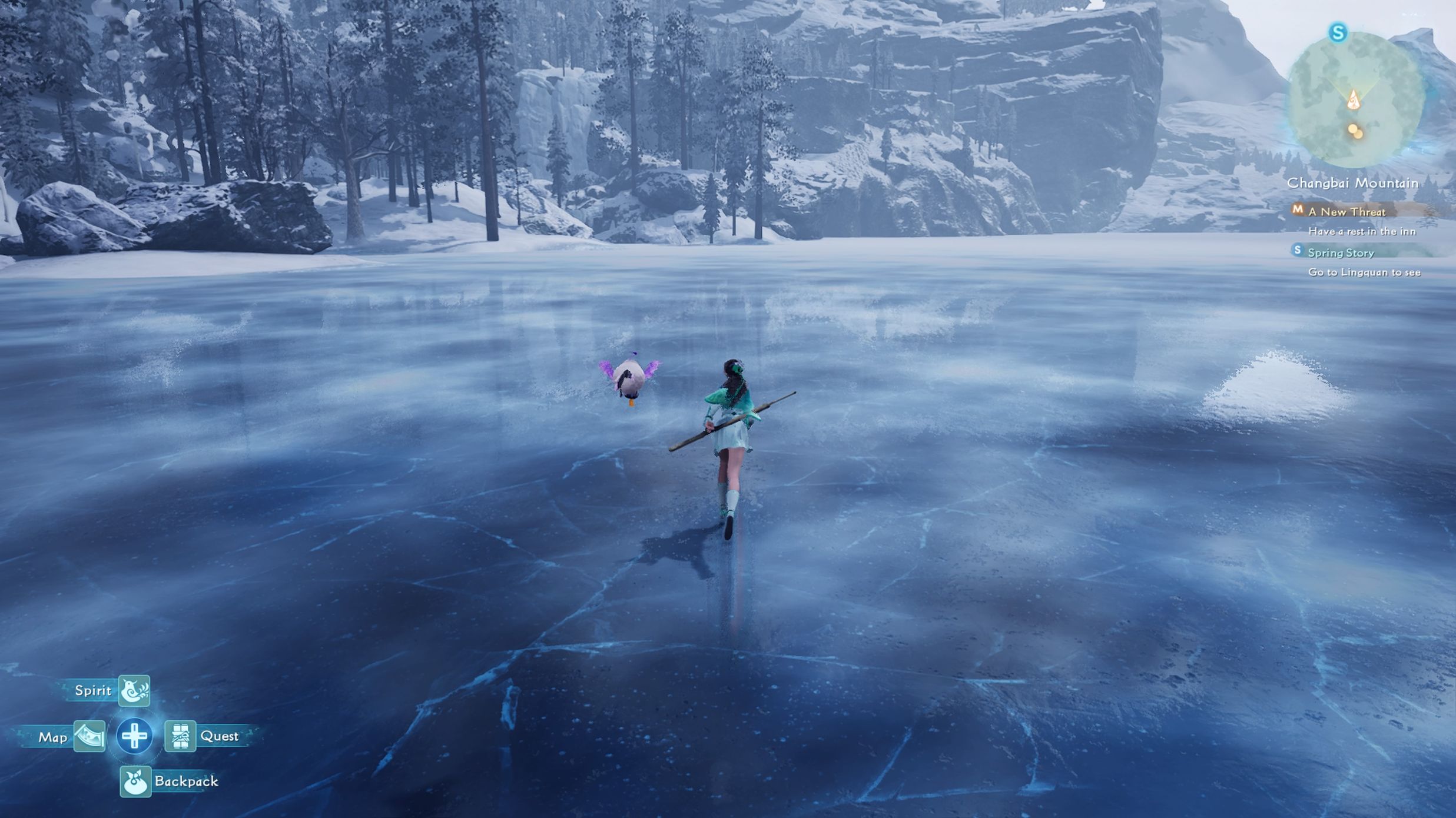 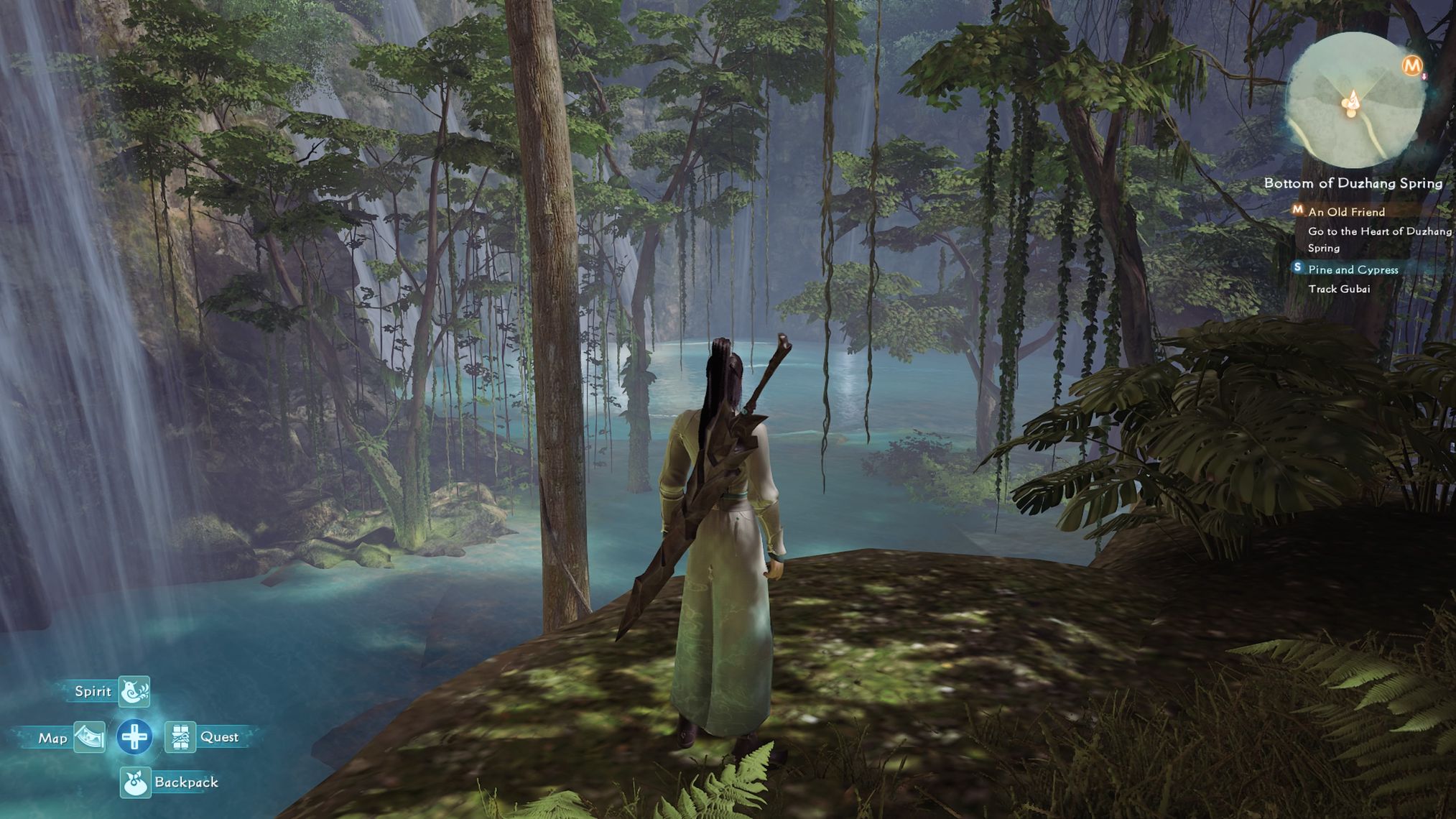 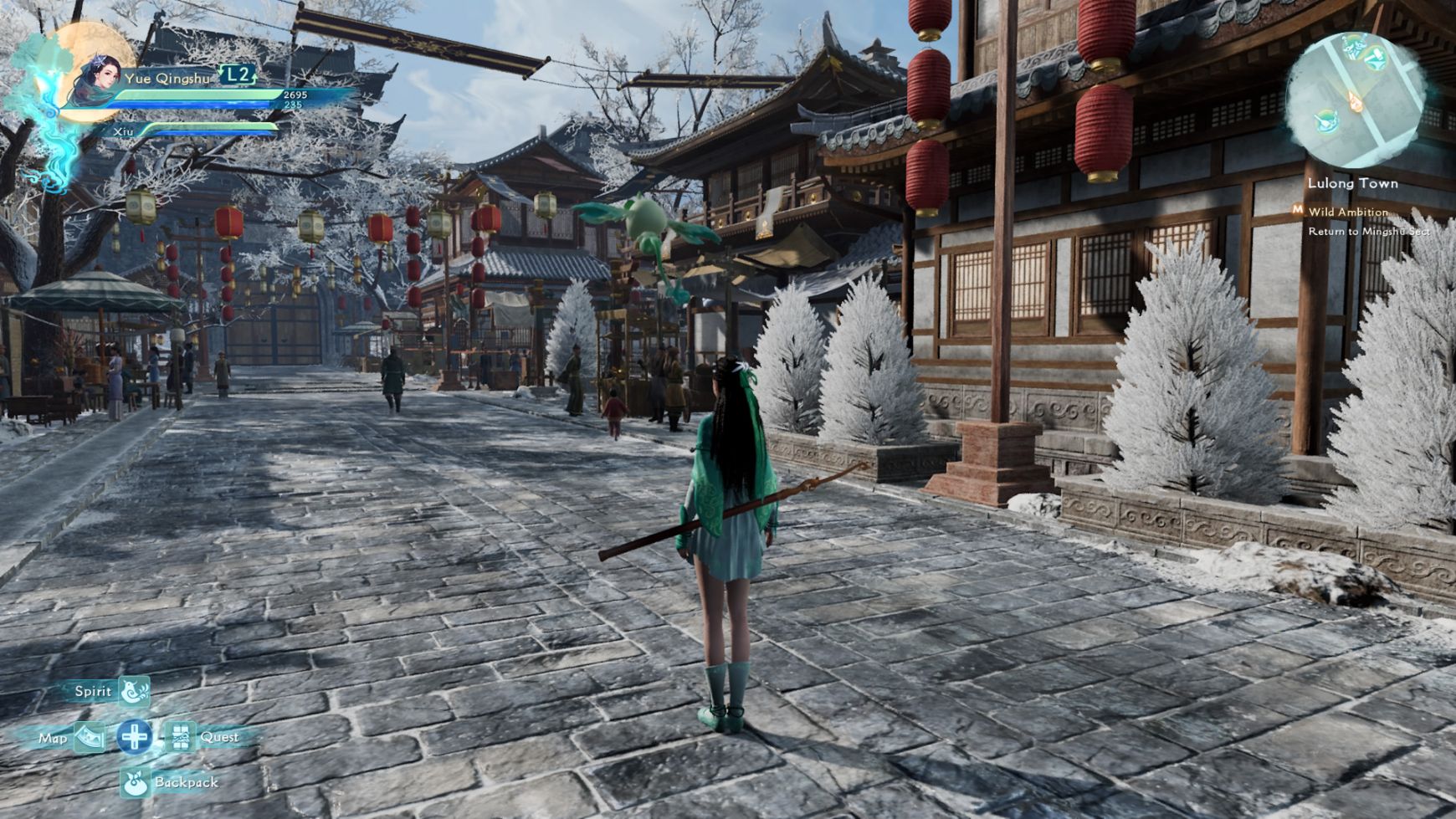 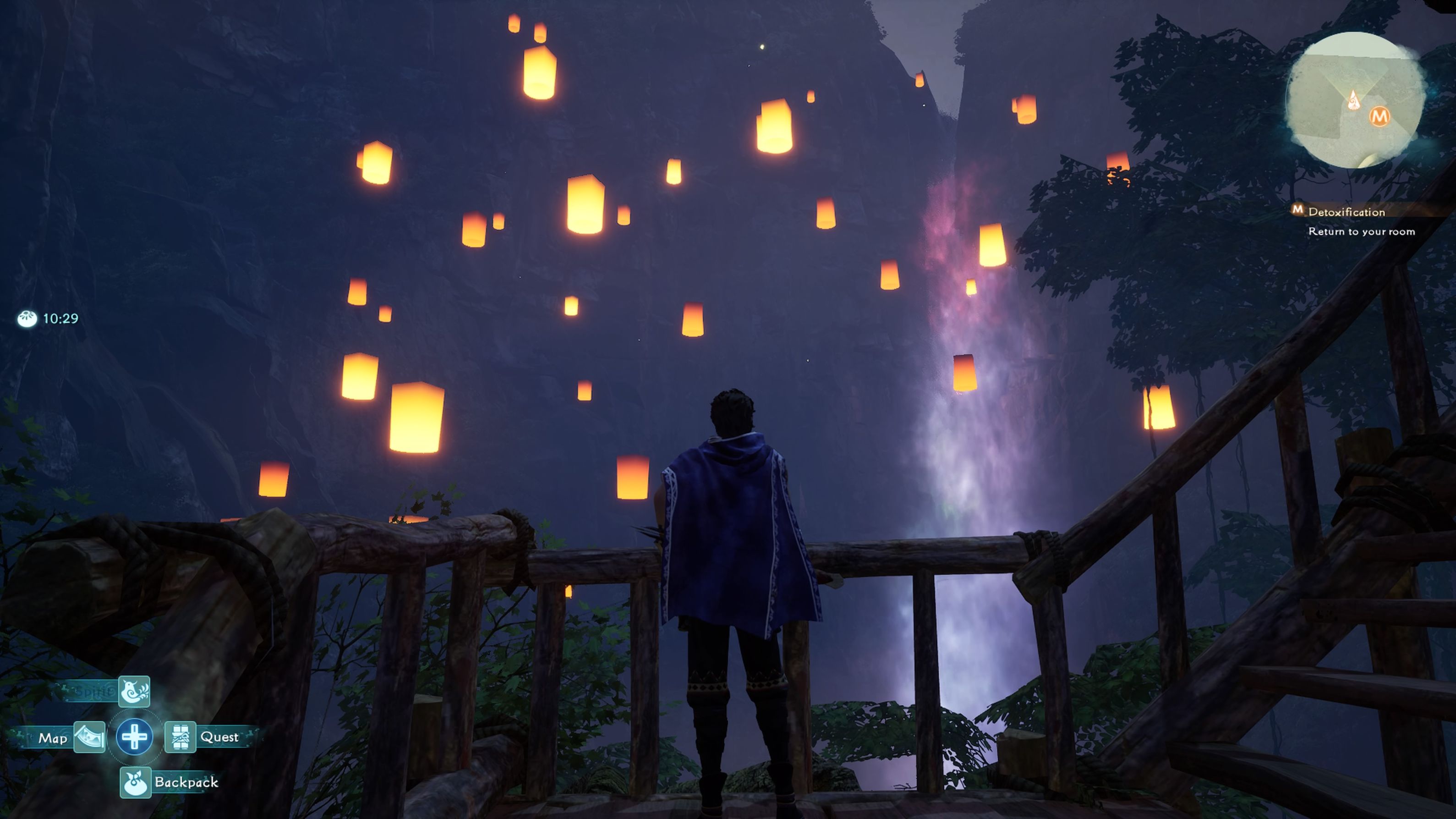 Every location, every town feels vivid. There is so much effort put into making the world memorable, so the linear approach of the game is somewhat that more developers need to start doing again. Nothing is this game feels generic.

So, an action RPG. Usually I’m not a big fan, they can’t get the combat part right. Unfortunately, that issue is present here. Battles are maybe one of the game’s weak points. They don’t feel diverse, but they are fed with special effects and magic, which ultimately raise the bar a little.

Exploring is solid, the locations linear, semi-opened. They are unique, they are such a beauty. Collecting chests can be skipped, but you can get some recipes if you like to cook. Not much apart from some higher version of weapons and items can be found in them.

Since most of the game is linear, enemy variety could be bigger, but I can’t nag much as there is just enough when you look at the game length (which is around 25 hours if you do most of the stuff). Boss fights are cool, although I miss more strategy. It’s all about dodging at the right time, doing couple of combos and finishing with some magic. It’s still fun but lacks depth. I want more combos, more movesets, more abilities, maybe more summons even. There is a huge potential here. I felt like I did the same thing throughout the whole game, even with changing characters in battle it felt underwhelming.

Playing with other team members is always welcome. Most of the time my favorite was Xiu Wu; he is just the strongest, the coolest and has the best abilities. Visual changes when equipping different weapons is my weak point, I simply love the weapons in this game. 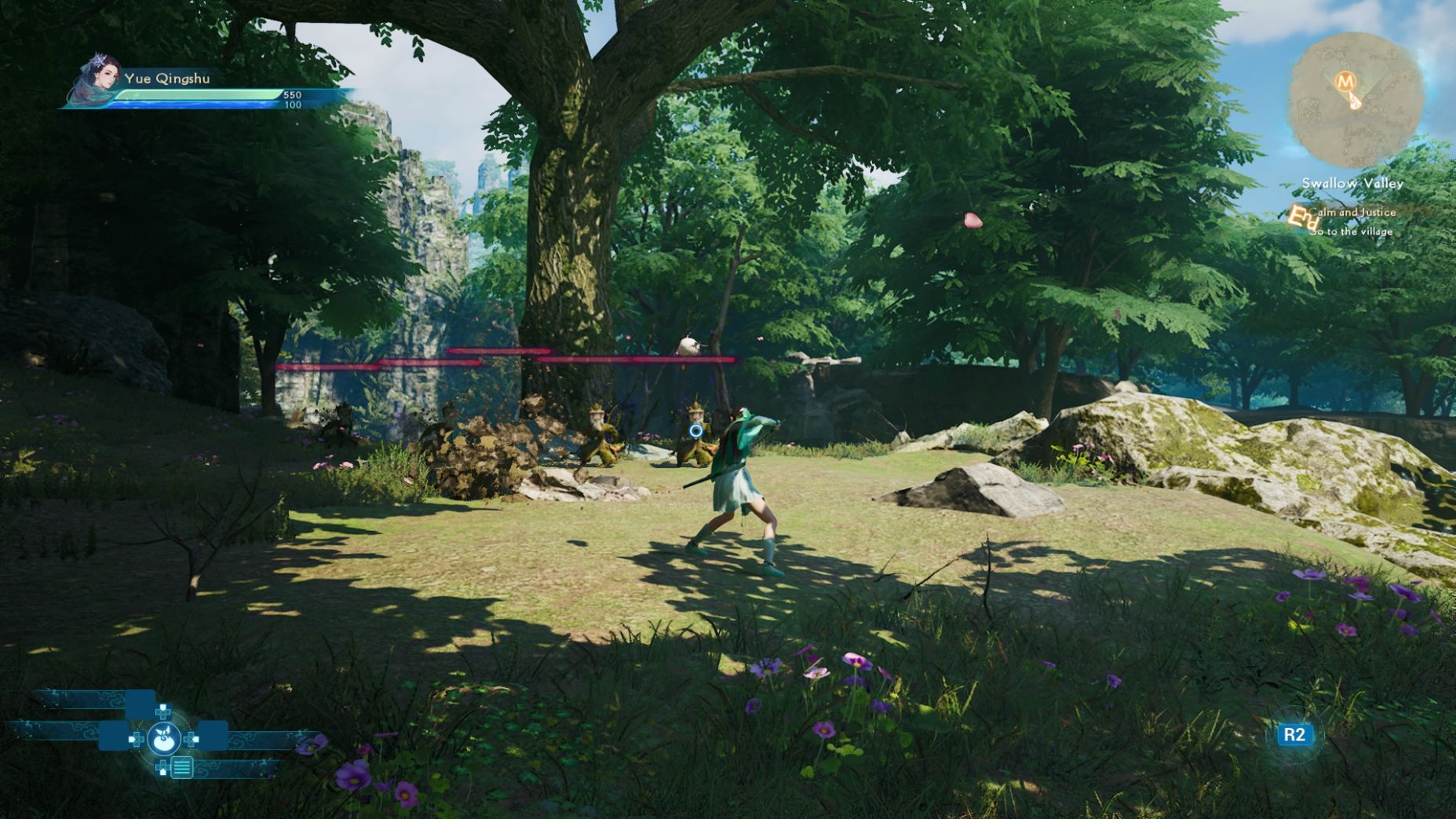 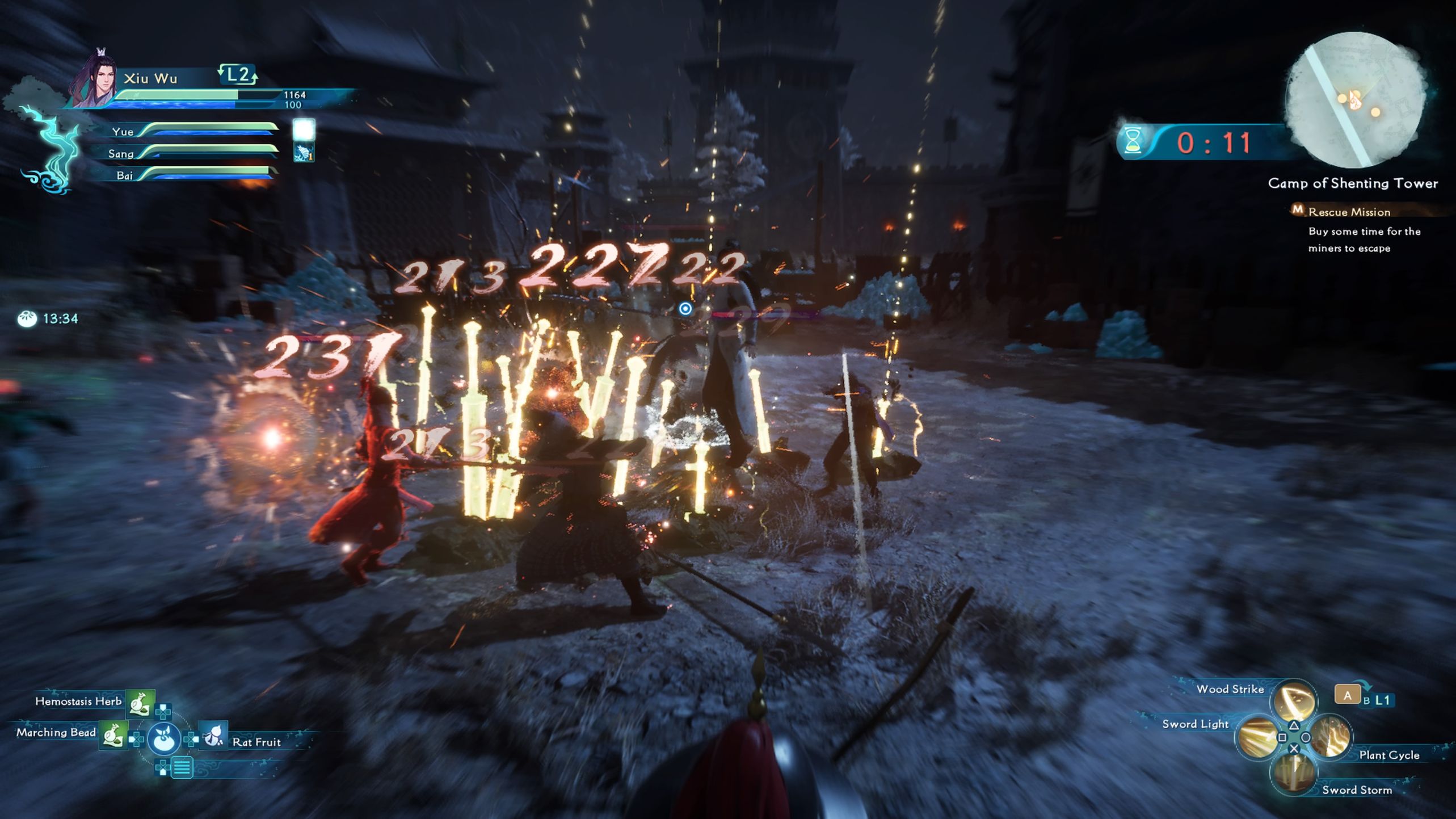 Although simple, battles are fun in its core. Changing characters is a welcome mechanic, and playing with them feels different as they have their own abilities and weapons. If they manage to polish this part further, we are in for a blast.

You also collect Spirits – they come as spirit beings that can connect with humans in a form of a bond. The idea behind is great, but utilizing Spirits is not a big success. You can feed them to raise their level, which then raises their skill power and some perks such as item drops etc. Nothing spectacular. The best part is when you solve quests to get them. I loved more the part when you learn about the past and them in general, then I loved using them in combat.

Weapons can be crafted and enhanced, but that is it. Armor sets as well – they don’t come with visual changes, but they raise your attributes as you’d expect. Having latest armors before boss fights can save your ass, I felt the game had some spikes on Normal difficulty when I was lacking money to update equipment on my team.

Set 8 abilities to use in fights, healing items and you’re good to go. What remains is leveling up (but no grinding is needed whatsoever). Simple RPG stuff, not great, not terrible. 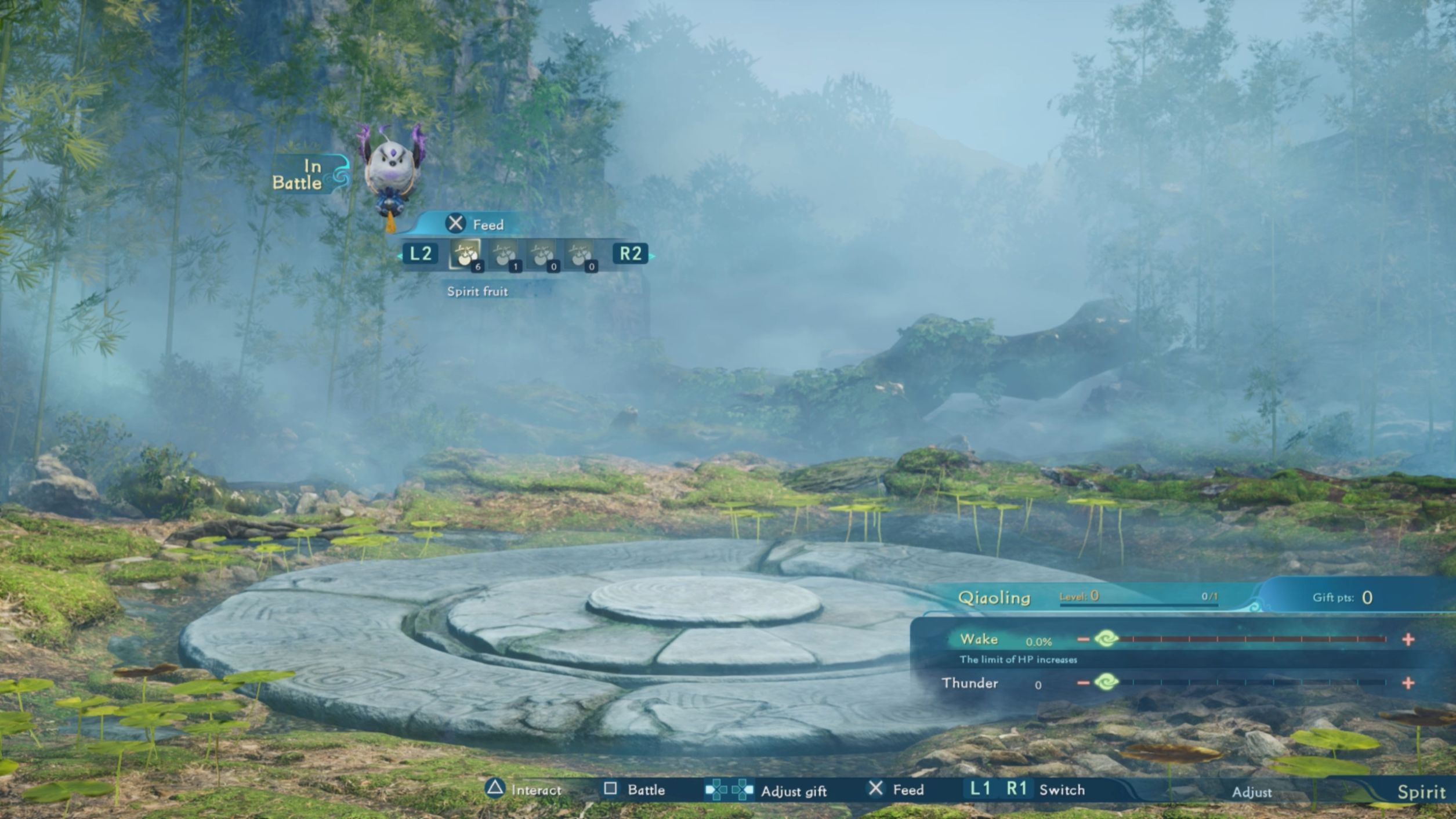 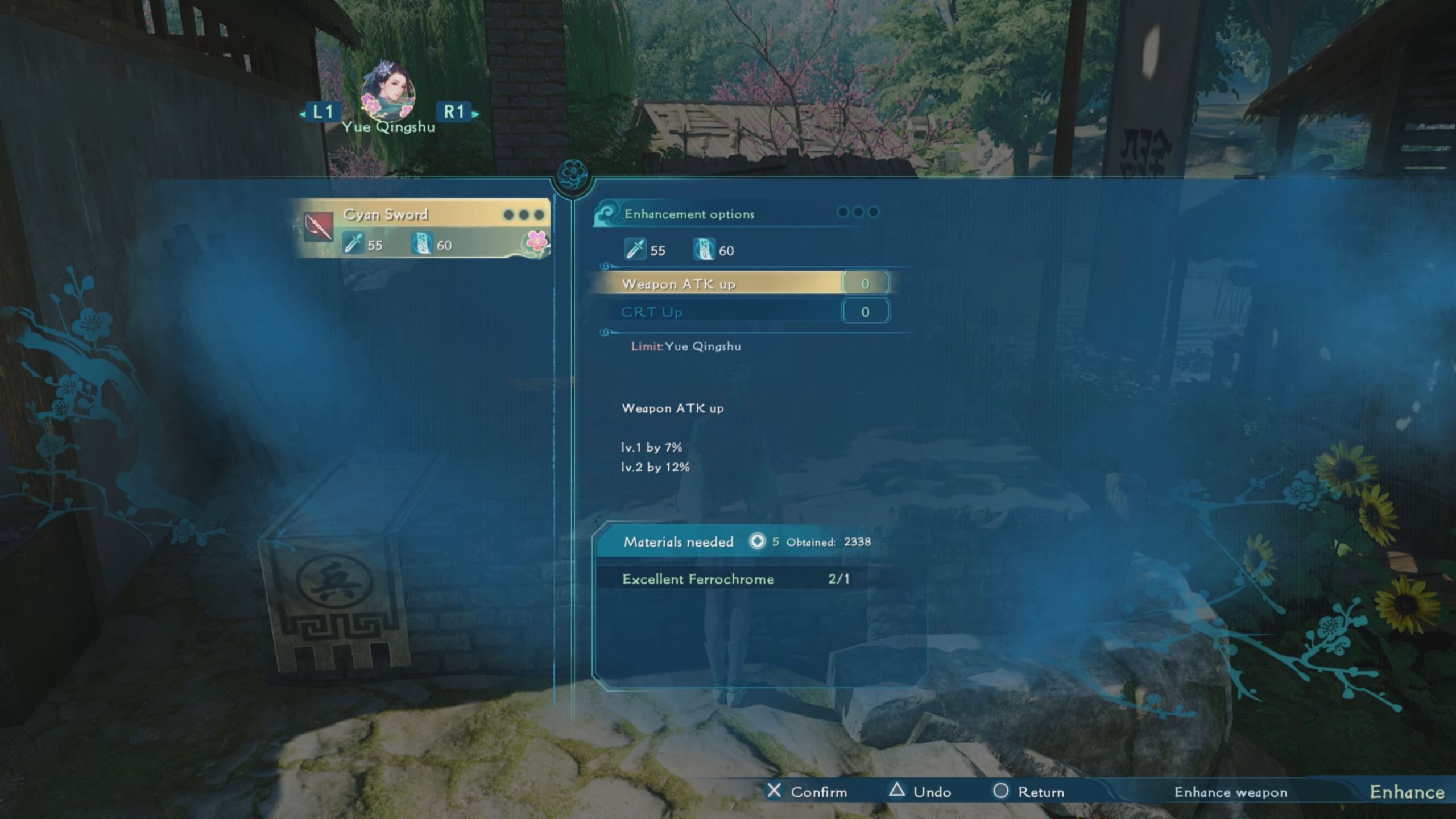 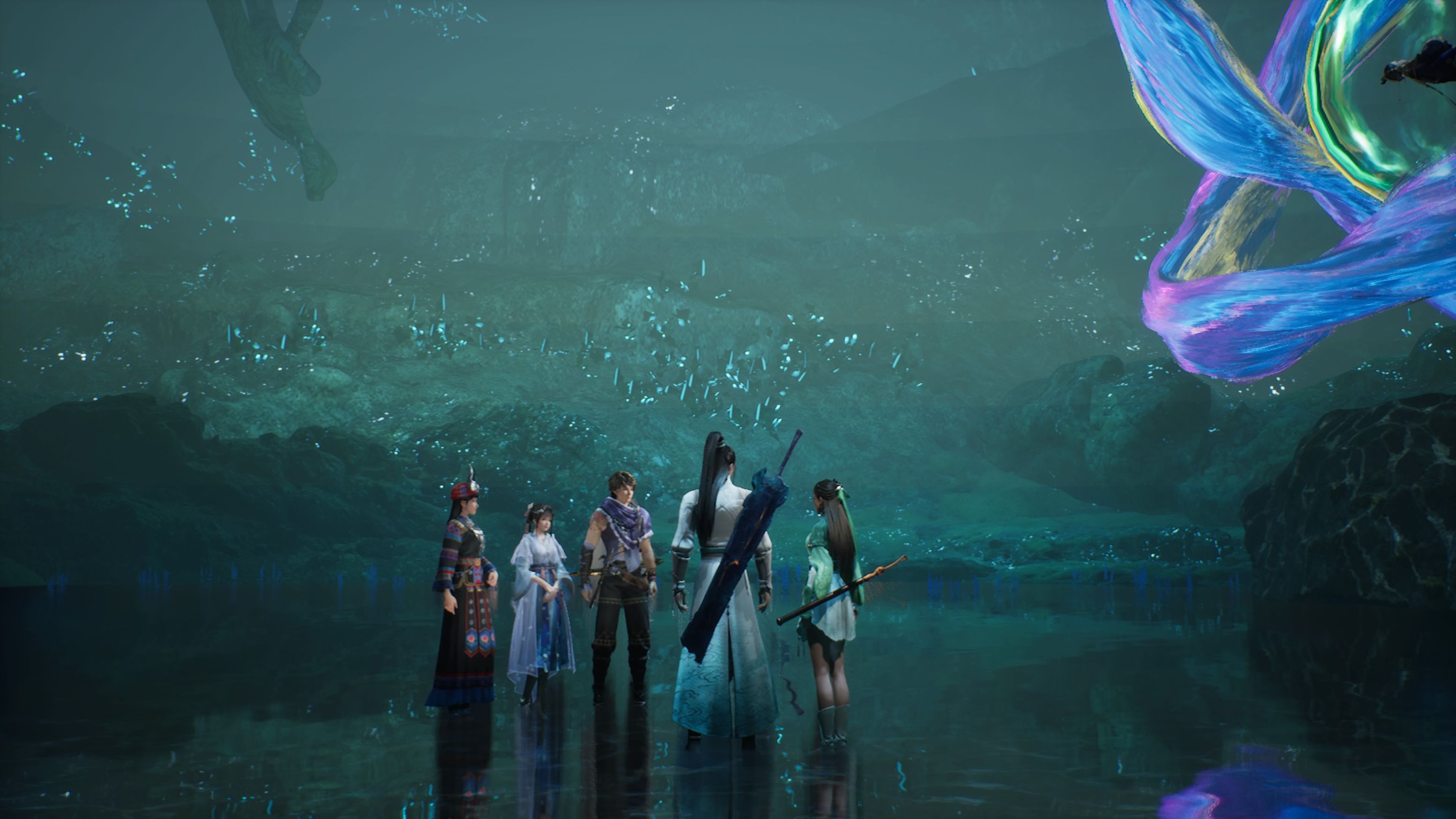 Collecting spirits is not special, but the story behind each one is rather interesting. I mean, the whole world in the game is awesome, I'm such a huge fan of fantasy and Chinese mythology feels fresh and interesting to begin with. The last picture is just qwesome.

Side content was a ton of fun. Errands (side-quests) are quick and simple, fetchy but not bad. They always have some background story. That is something to welcome, I did them all and I didn’t mind. The “problem” is that everything is marked on the map, so finding something feels unrewarding. Still, in a story-paced game, that is not so bad.

There is a card mini game as well. It’s a rather simplistic version of what one can find in Witcher (Gwent), just with elements and certain mechanics that are in this game. I also beat all opponents, loved the cards. Not a bad side content.

Lastly, you can do leaf-jumping mini-game. It’s a short mini game, which is good considering that jumping is atrocious. Last leaf challenge was pain in the ass.

Side content has a pass from me. It’s enough stuff considering the length of the game. Yeah, it can be better, but I don’t mind much. The most I farmed was for weapons, the rest never required such drastic investments. 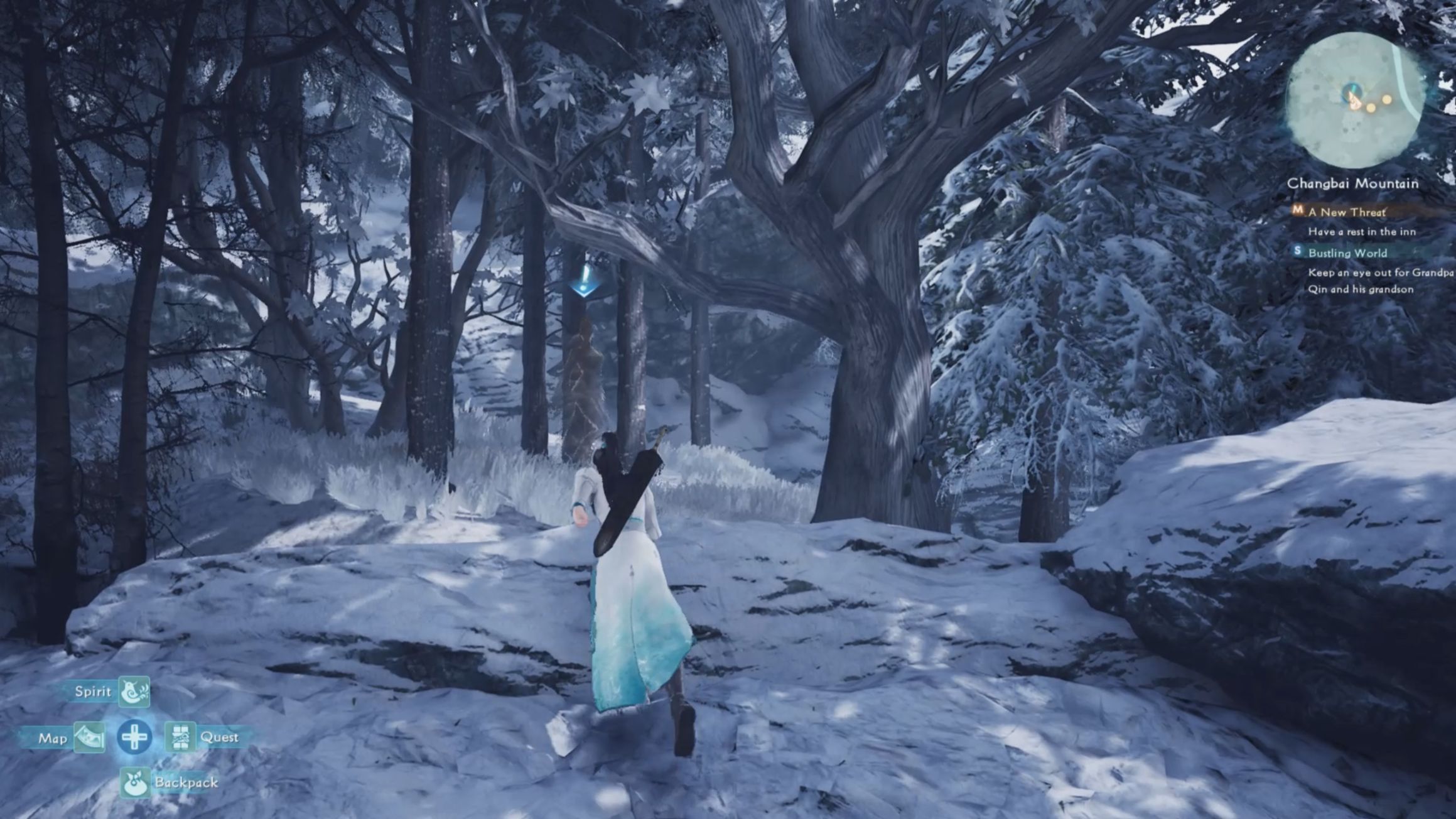 I wish there was more content. Having that said, the game offers just enough for you not to get bored. Cards are fun, even quests feel interesting when they talk about certain events and situations that are in this world you're in.

Technical part of the game is good. It runs smooth, but there are stutters here and there, especially in towns. I guess they need some time to load the assets after which it feels smooth. Maybe the biggest problem are pop-ins when you explore the world, and in scenes. I don’t understand why there are pop-ins of environment in cutscenes. In battles the resolution drops when there are a lot of effects on the screen, but you can’t see it unless you take a screenshot (only then you will notice the pixels).

I will repeat – this game is beautiful! A real eye-candy. How did they pulled it off using Unreal Engine 4 is beyond me. For a mere half price of AAA games and a 25-30h of quality content, some clunkiness here and there – I think this game is well worth it. It’s like a much better version of Xuan-Yuan Sword, with better characters, story, well, everything! 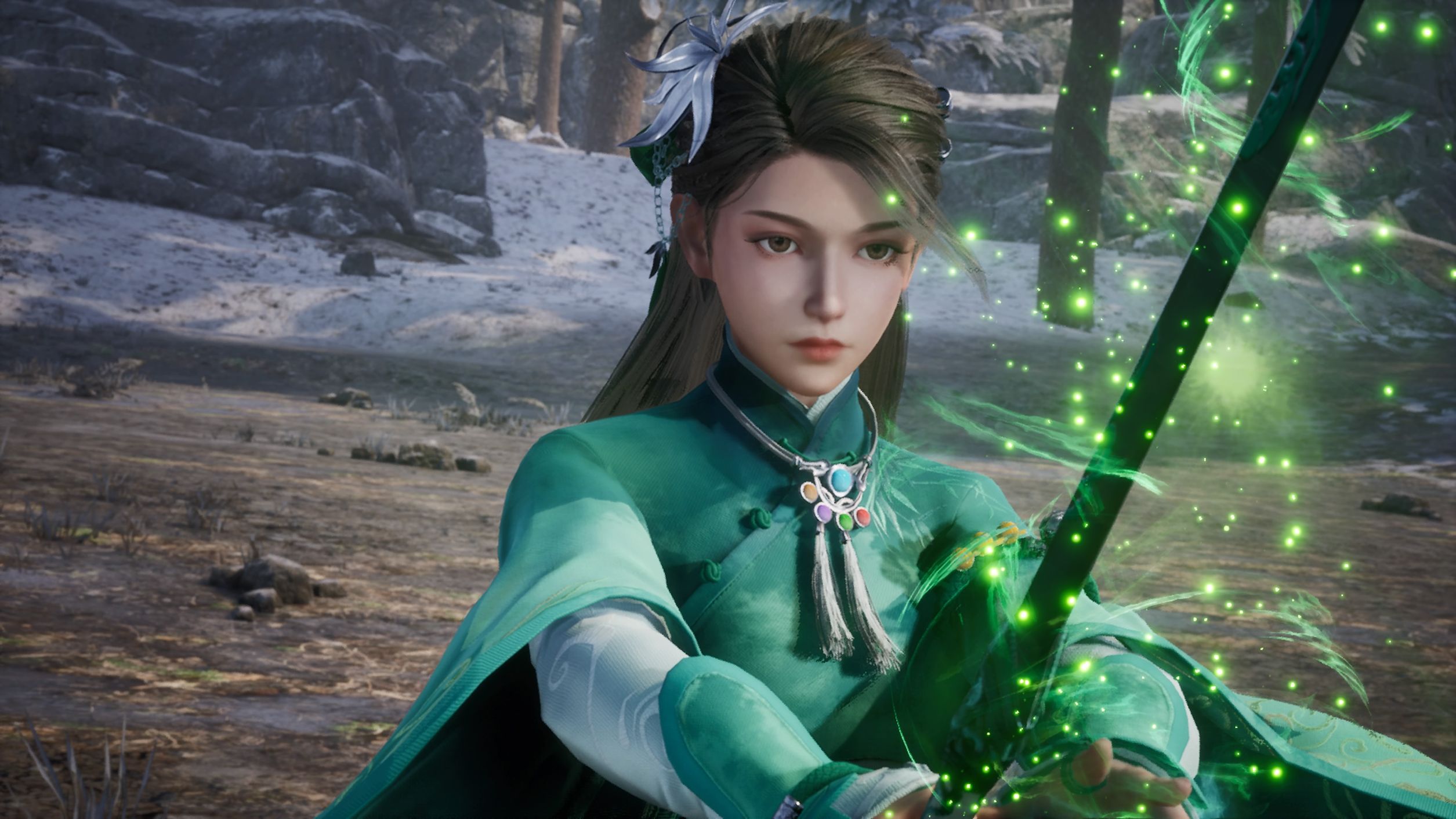 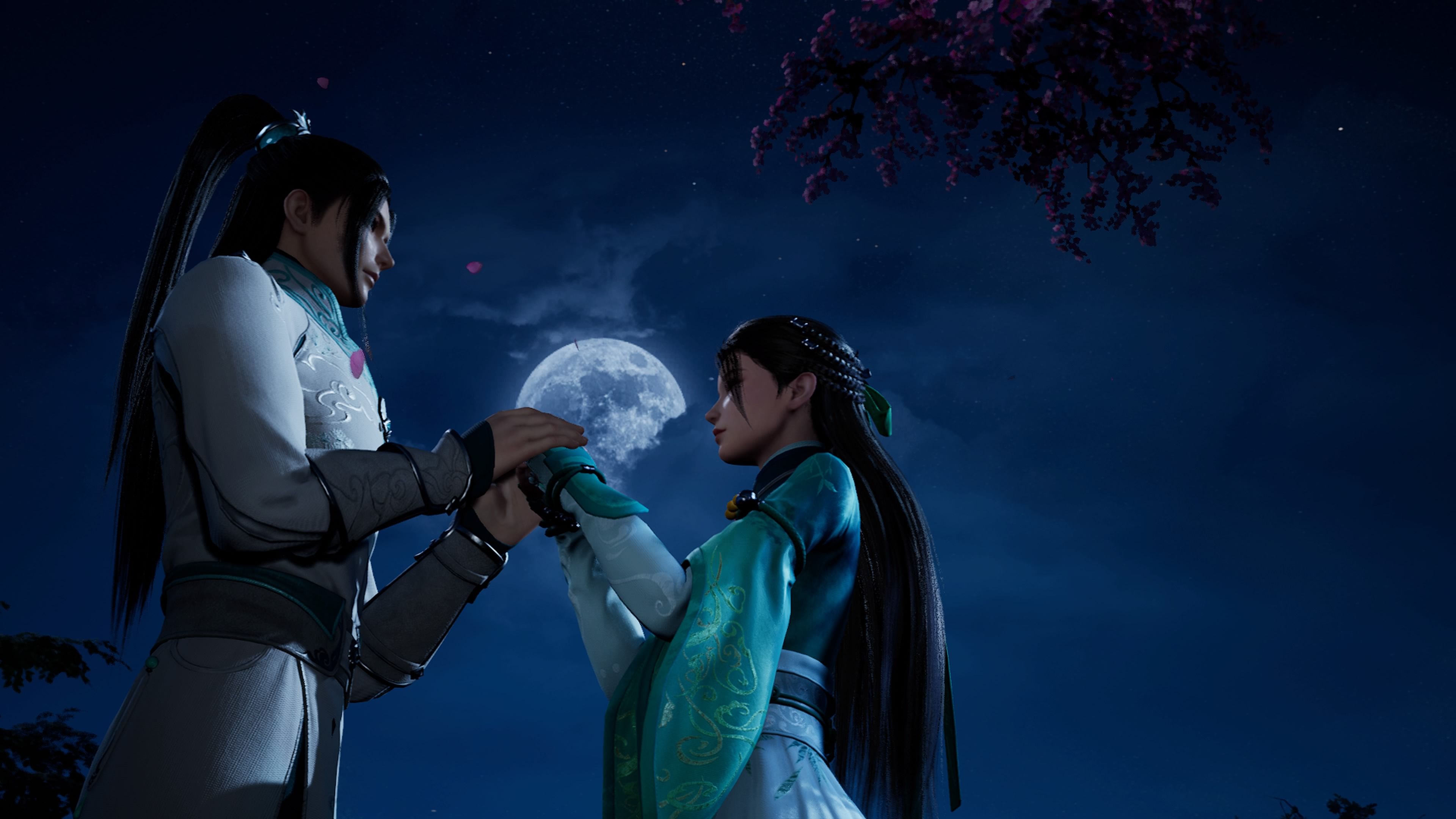 Yes, maybe the game is a bit clunky. Yes, it needs some polishing, maybe some transitions between the cutscenes. Does it matter? No! I had no issues whatsoever, it was such a solid experience full of enjoyable moments (even though some scenes felt rushed and weird, even confusing). Money well spent. Play this game, let’s support these guys, I really want another game from this studio!

"Maybe this is not AAA title, but sure it feels like one. Such a wonderfully linear experience that more developers should strive for!"