"Do you like fishing? I don’t, but in a way I do. We have a sea of soulslike games out there, and fishing for one is my way to start something that I might end up liking. Thymesia is a decent fish for me, but then again, there are far better fishes out there." 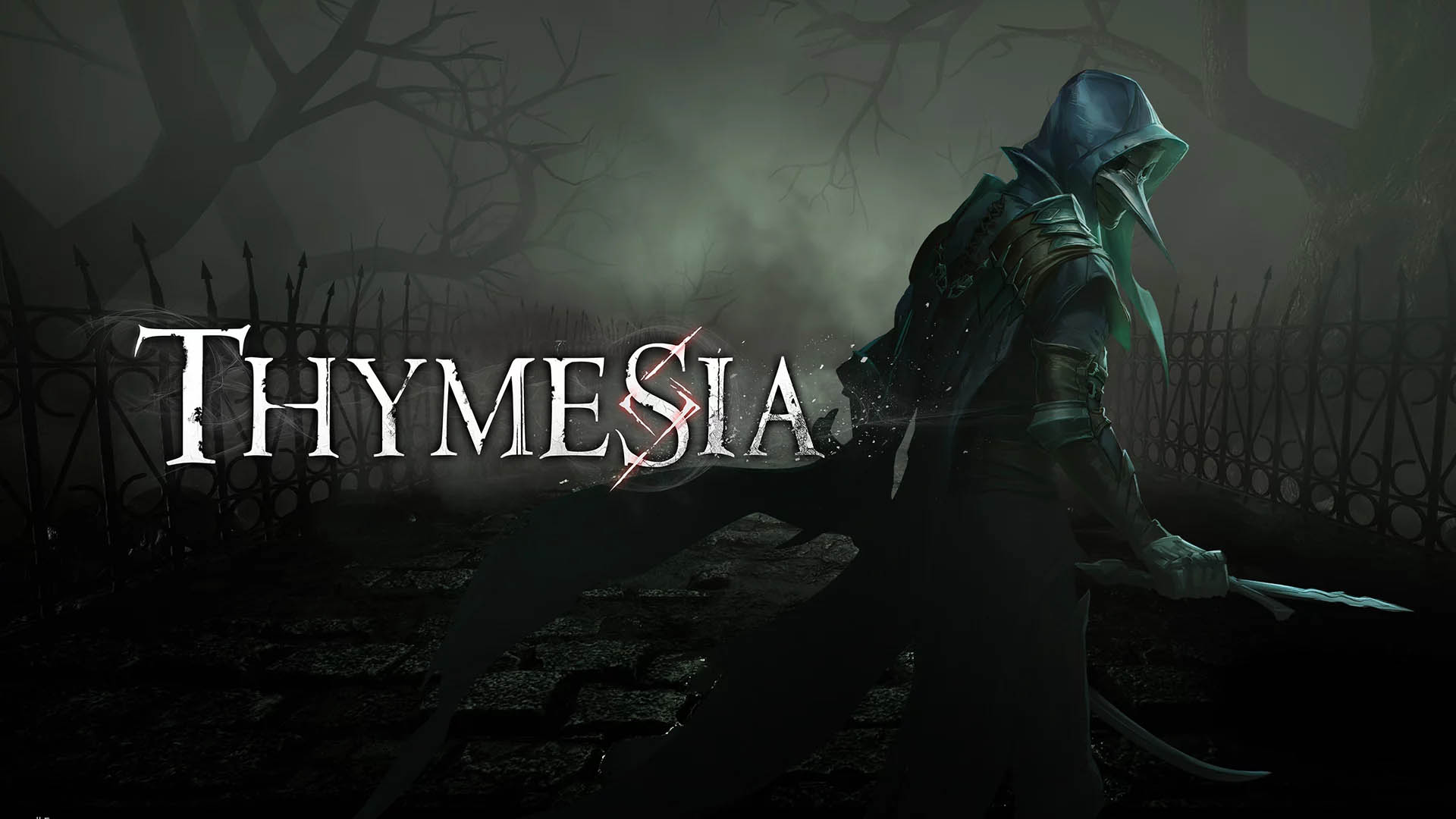 Yet another soulslikeborneringnioh-type of game? Yes! It’s rather weird having so many games that are quite similar, yet fairly different. This time around the OverBorder Studio tried making the first video game. If you ask me, they succeeded, but there are issues underneath the fun surface that you can grasp through game trailers.

OverBorder Studio is a gaming development studio from Taiwan (didn’t knew that!). Team 17 is the publisher for Thymesia, and the game is below 30$ on PS store. You can also buy it for PC, Xbox, and Switch. In short, we are looking at new fast-paced souls-like game with simple RPG mechanics and lack of animations. Let’s start! 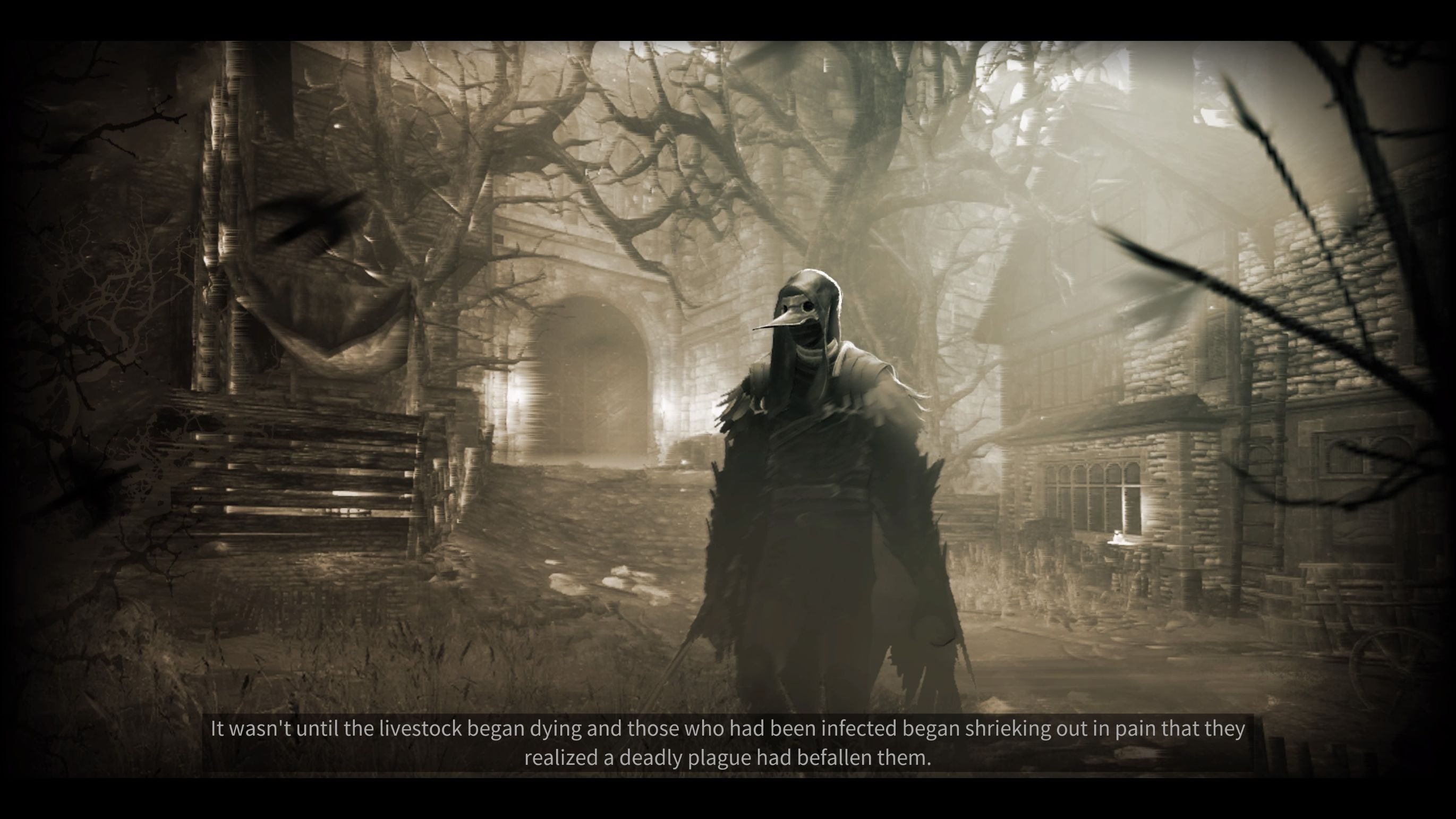 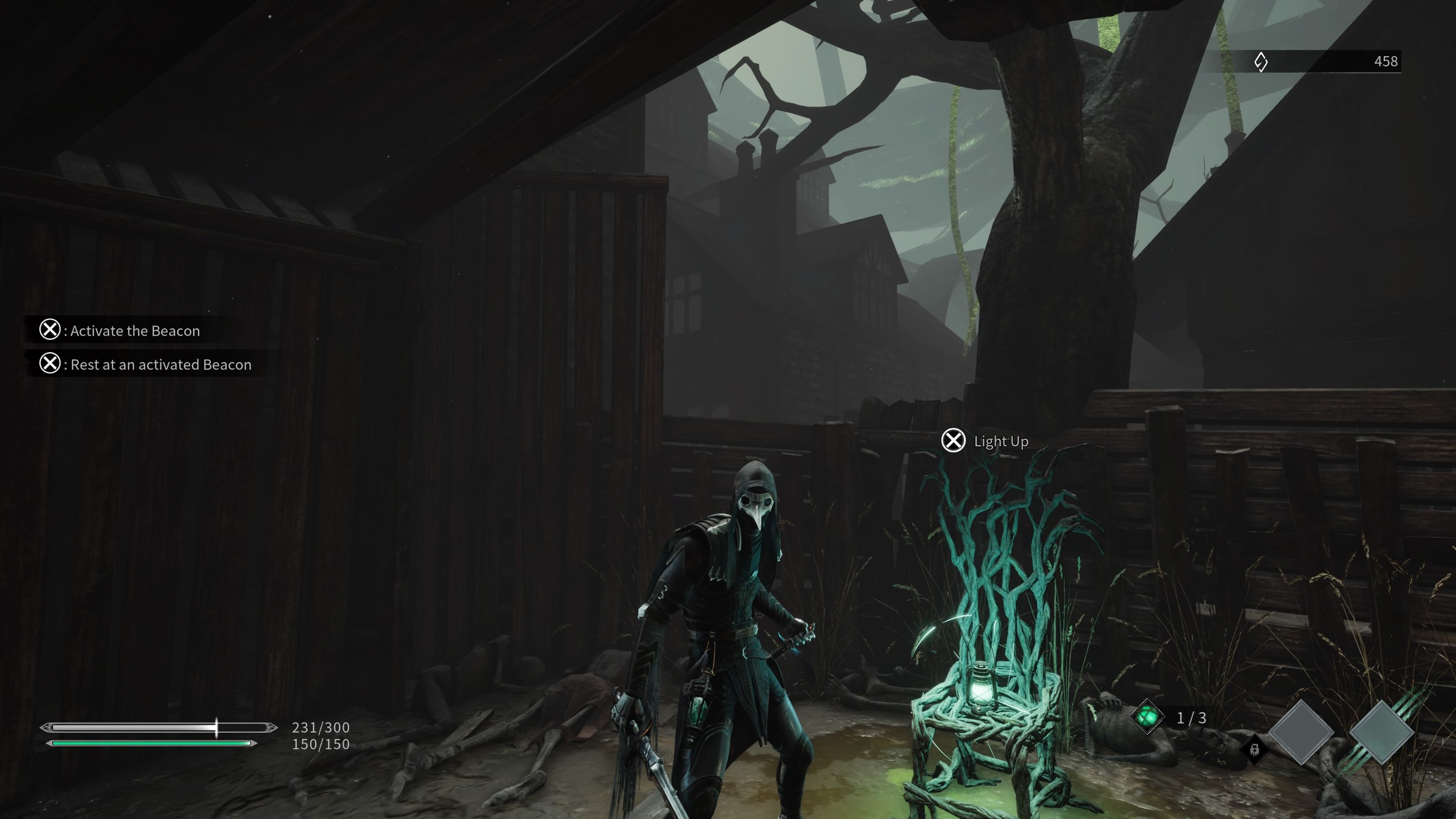 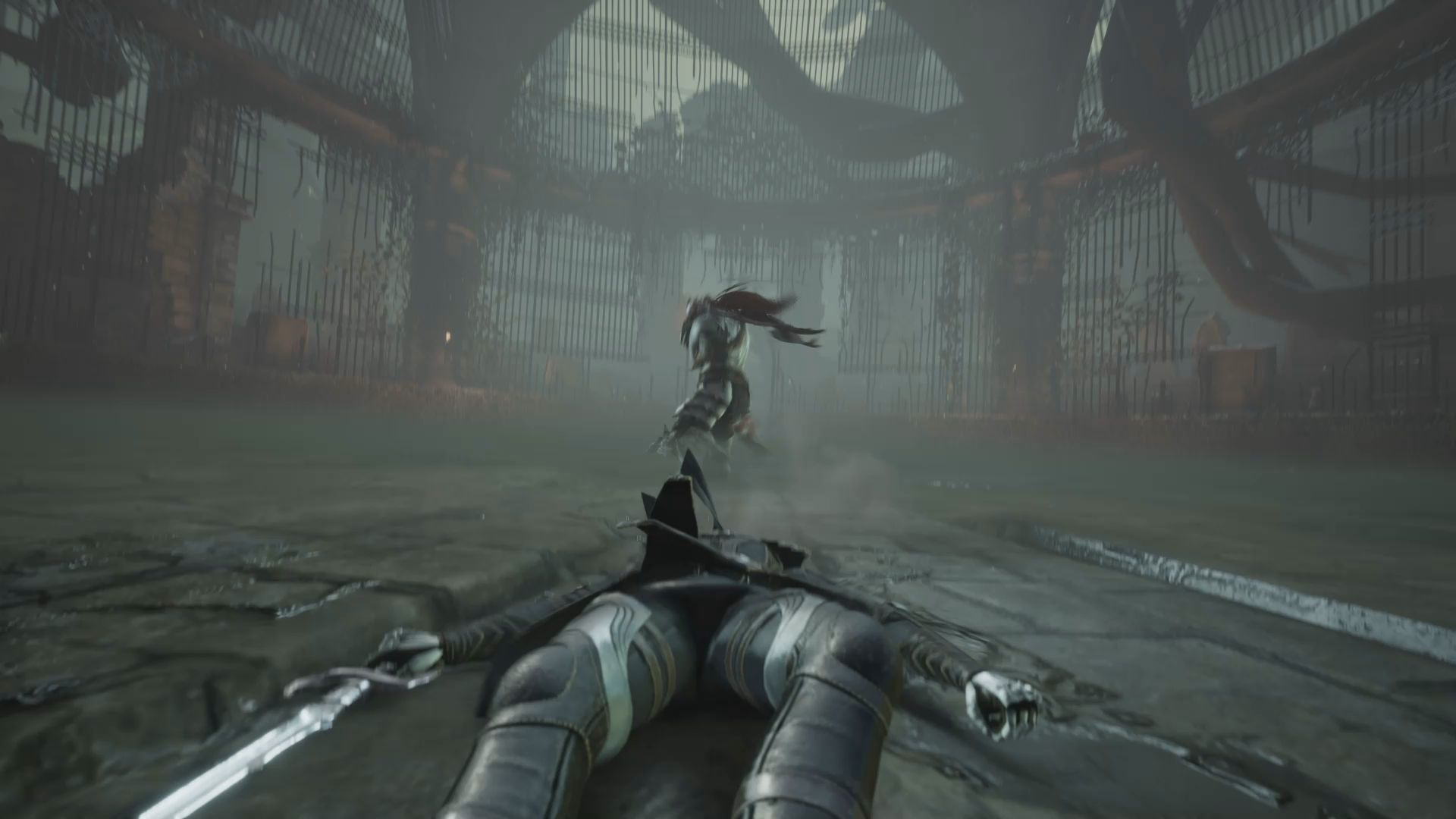 Welcome, we have no idea what happend, but we do know one thing - just look at the last picture of Corvus on the floor.

My first glance and feeling of this game was bad. Hit boxes were off, I had issues with dodging and attacking. That was entirely my fault though, because when you press attack button 3 times, your character will attack 3 times, you can’t really stop the queue. Is that bad? No! That is how multiple games of this genre behaves, and that is great because it depends how inpatient you are, which can cost you your life (in video games of course).

After that barricade I started to enjoy the game, but I kind of lack the interesting story, characters, and lore. Lore is divided between notes you pick up in dungeons, and basically that is it! To understand who you are, who experimented and who; to remember your past and connect the dots, you will have to read as much as you can. There are no game animations except before the boss fights, there is almost nothing that can serve as a story guideline. Whoever looks for that in games, this one is really not for you. I kind of liked the atmosphere and reading the docs, but still, c’mon, we love animations! 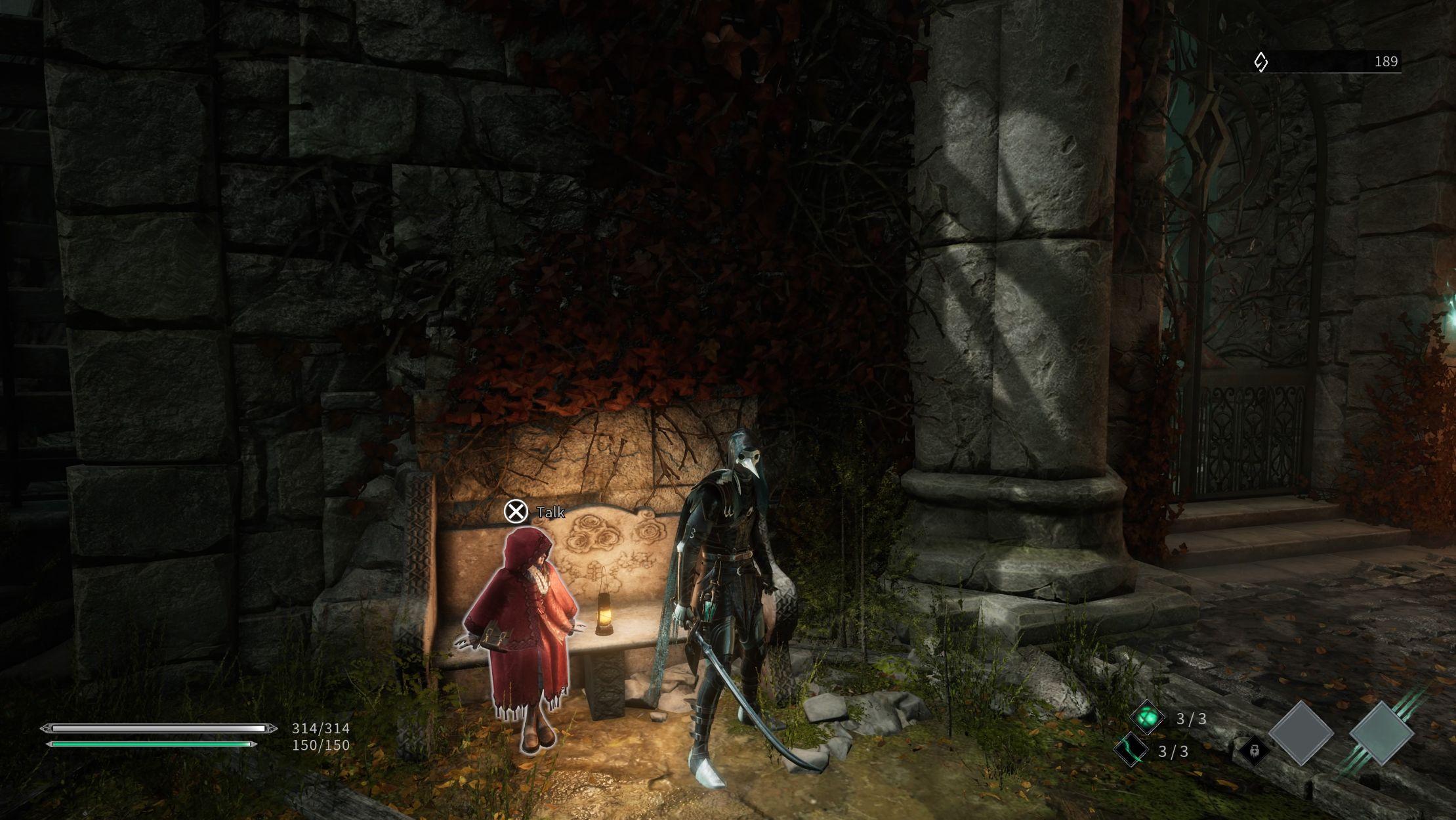 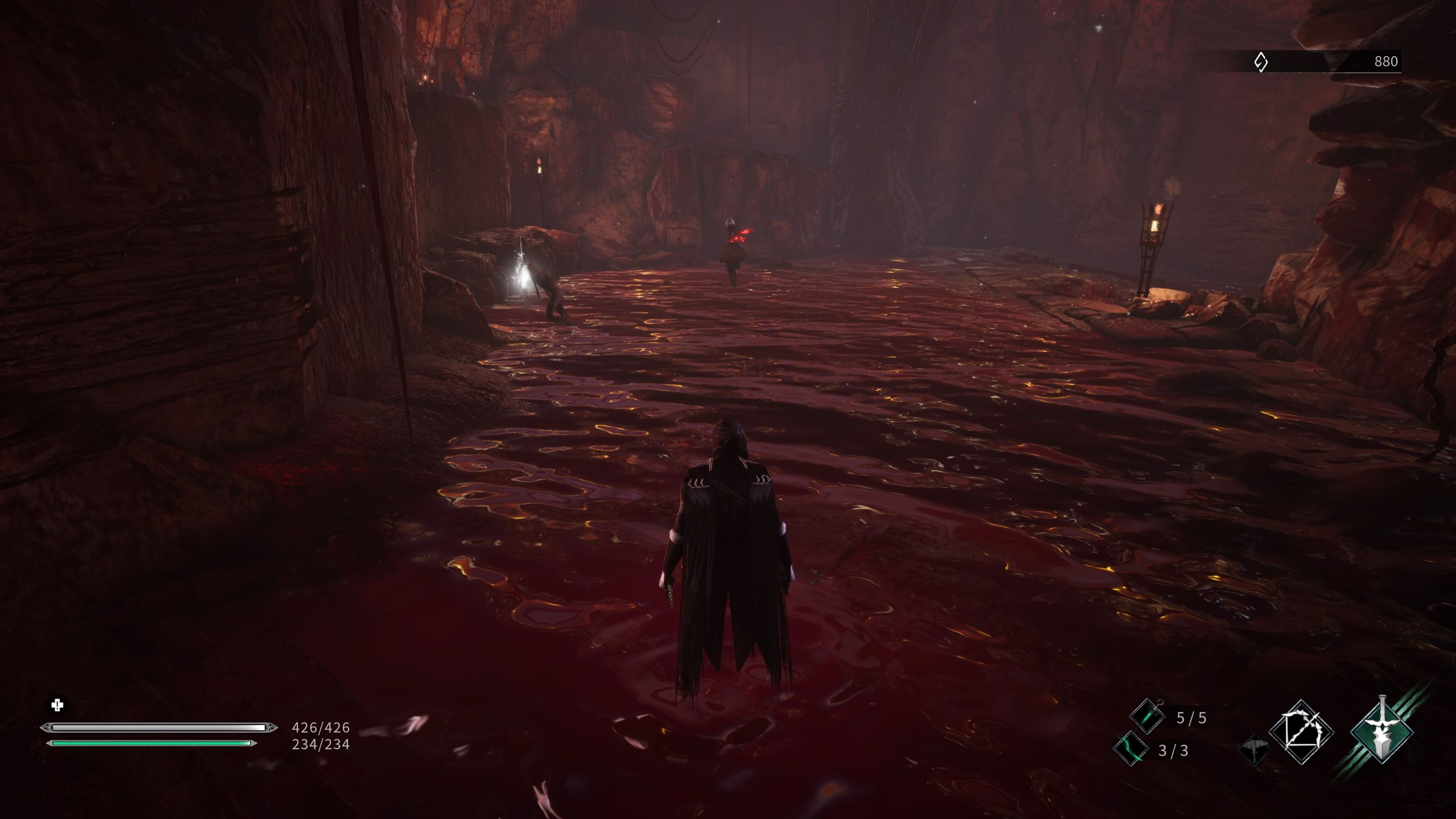 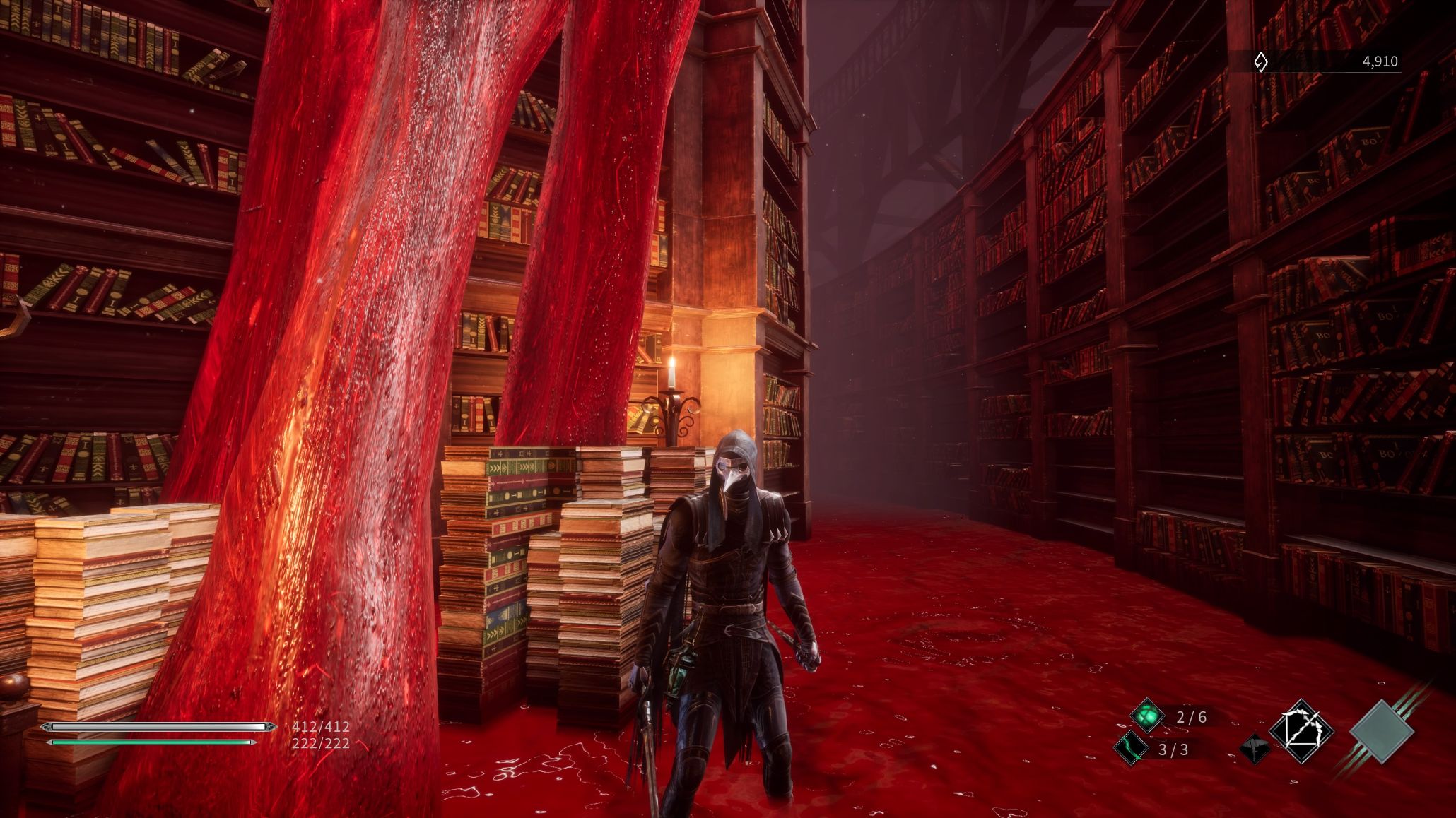 I kind of dig the locations! Too bad they're really simplistic, but I liked this approach way more than backtracking for half of the game. Still, exploration factor is low, but the combat fulfills it. Whats up with blood?!

Overall, the game is short. Up to 12 hours without collecting everything. If you’re good, 12 hours is also enough to collect everything, plus to beat the game. I think I have like 15, just because I was also doing a guide, so it just took more time. That is enough, do not worry! Levels are unique, and you can find 4 different levels (well, 5 to be exact). Some sub-levels are basically the same level, just from different direction and maybe different ending path. Nothing spectacular.

Design of the levels is rather simplistic but serves the purpose. A lot of areas have invisible walls, I guess that is something that follow games with lower budget. Still, it felt really dark and atmospheric in some levels like the one with pools of blood. Fortress was the worst one for me, but it’s the only one that will make you think where to now. There is no map, that’s completely fine, so you depend on your inner compass mate!

I wish there is more to collecting stuff, finding only notes, ingredients and scavenging for enemies was not enough to satisfy the explored inside me. 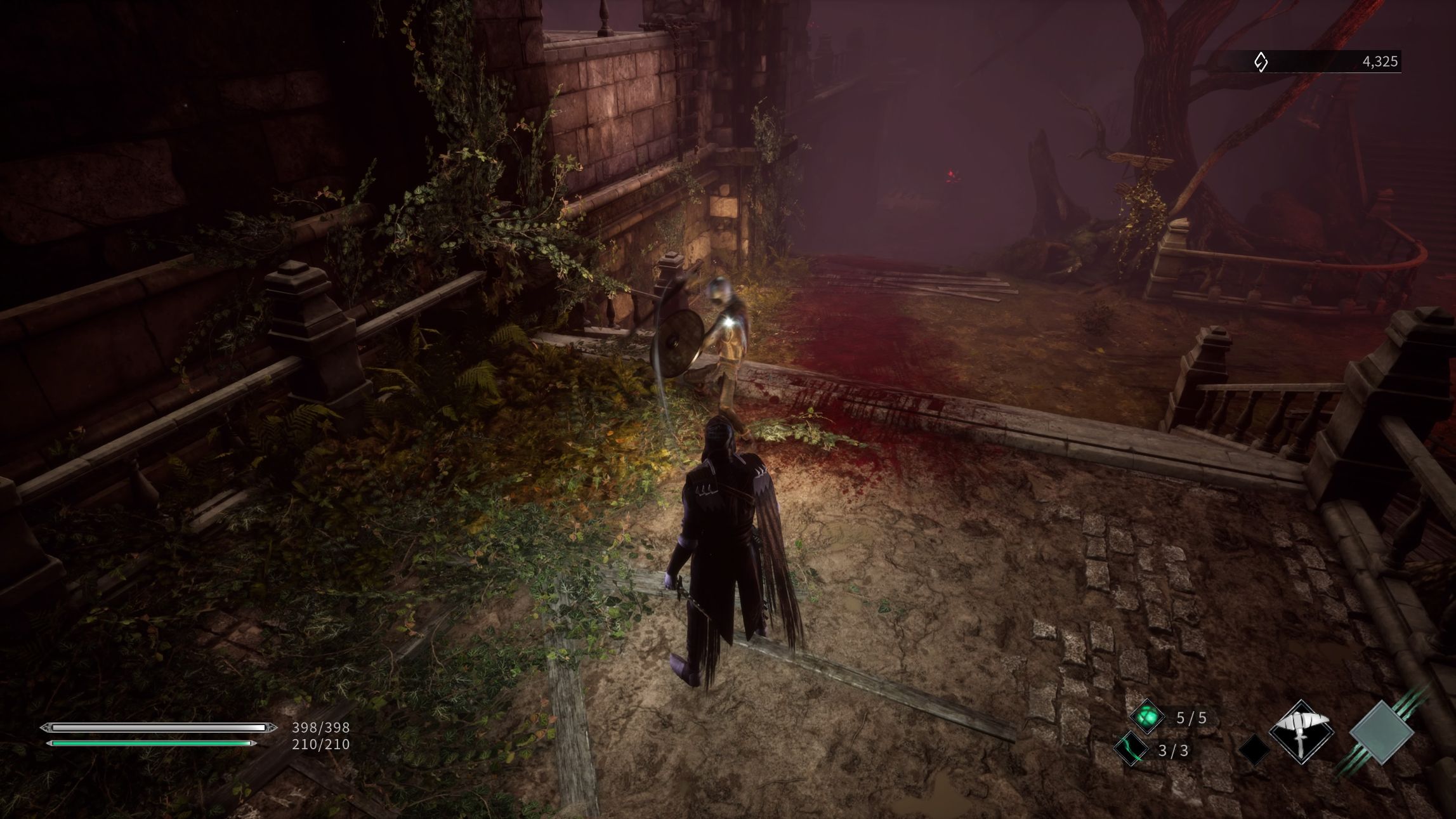 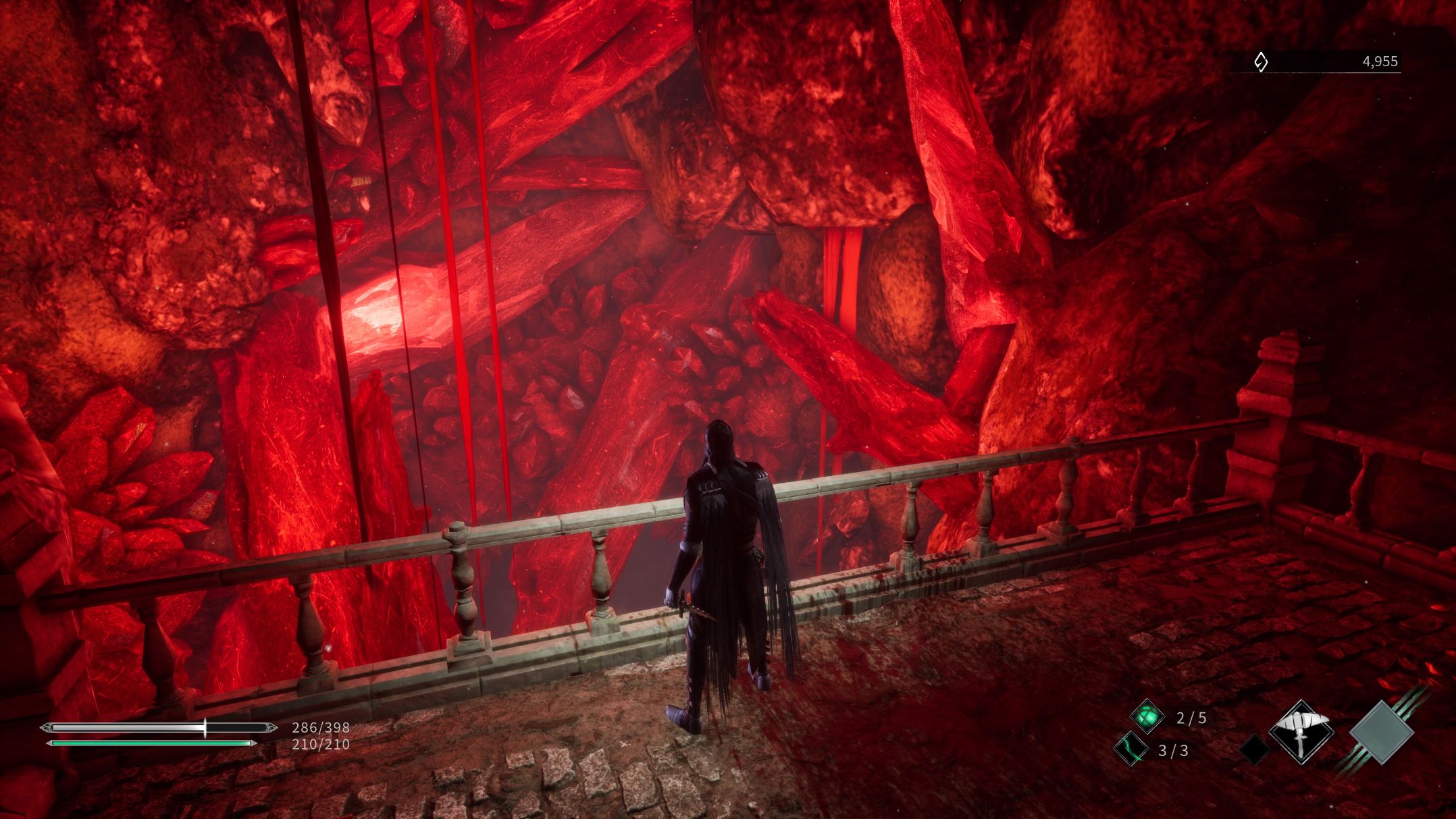 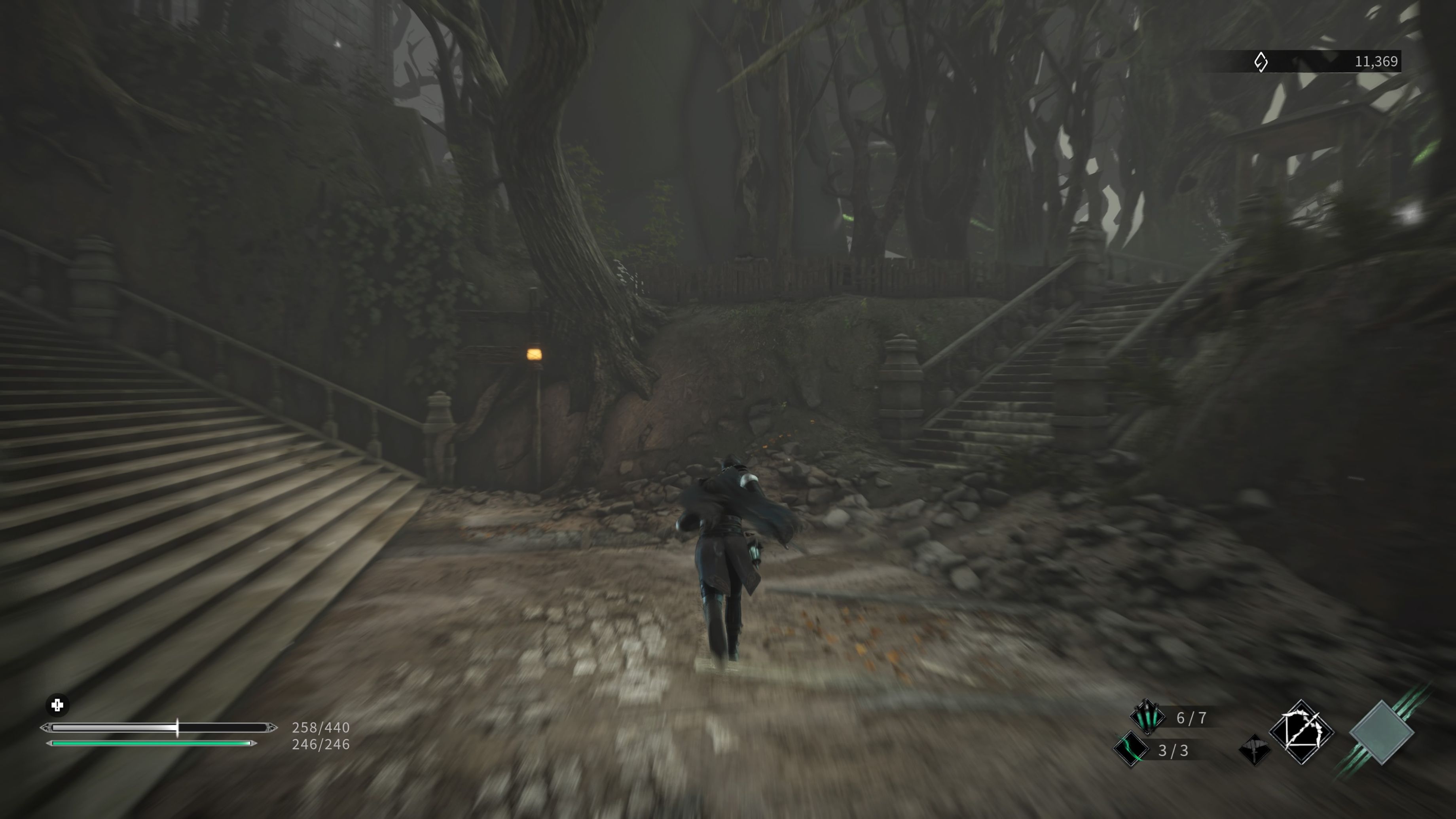 Don't you love running around when you kill all enemies? That never happened, but I just love running around, sticking to invisible walls, falling down... Nah, it's not that bad, especially with Plague weapons that can be stolen from each enemy!

I can say that the combat is the best thing in the game, and alone it carries the 80% of the grade I will give at the end. I loved it, really did. Maybe the animations and the physics are clunky, but the hit boxes and reaction time is on spot, especially when you try the boss fights.

First things first… So, the whole combat revolves around 2 types of attacks – the regular one, which depleted the main defense bar of an enemy, and the super cool reave claw attack that drains the other bar. R1 is fast, so you use it to deplete armor of an enemy, and then you claw your way to deplete the other bar. Be too slow, the armor regenerates, but only to the point where the lower bar is. This makes fighting dynamic, constantly pushing you to change between the 2, and the claw attack is so good, I want to use it every time. That attack will reach an enemy from afar, while the other one will not. When you start your dance after mastering attacking, you are in for a treat.

You can also use 22 plague weapons; basically it's few hits with a certain enemy weapon type until you deplete your mana. Bow is the best, but Scythe is also not bad! Too bad you mostly use regular attacks, I feel like the plague weapons are not utilized enough.

Dodging is also very cool, but deflecting isn’t. I liked it, but it’s so hard to deflect fast attacks, so I just ended up spending level up points towards dodge skills. You can combine 2 dodges, dodge on hit… It just feels so fast-paced after you master the combat and that is what makes the game fun.

Lastly, leveling up is really simple, you can only raise 3 main points on Corvus (your character), learn certain type of skills (which follows the tree-skill, so learning one can block you from the other one), and work with potions for healing, although they are also simple for usage. One good thing is that you can reset your points and experiment with different skillsets. For me, dodge + aggressiveness was the key. 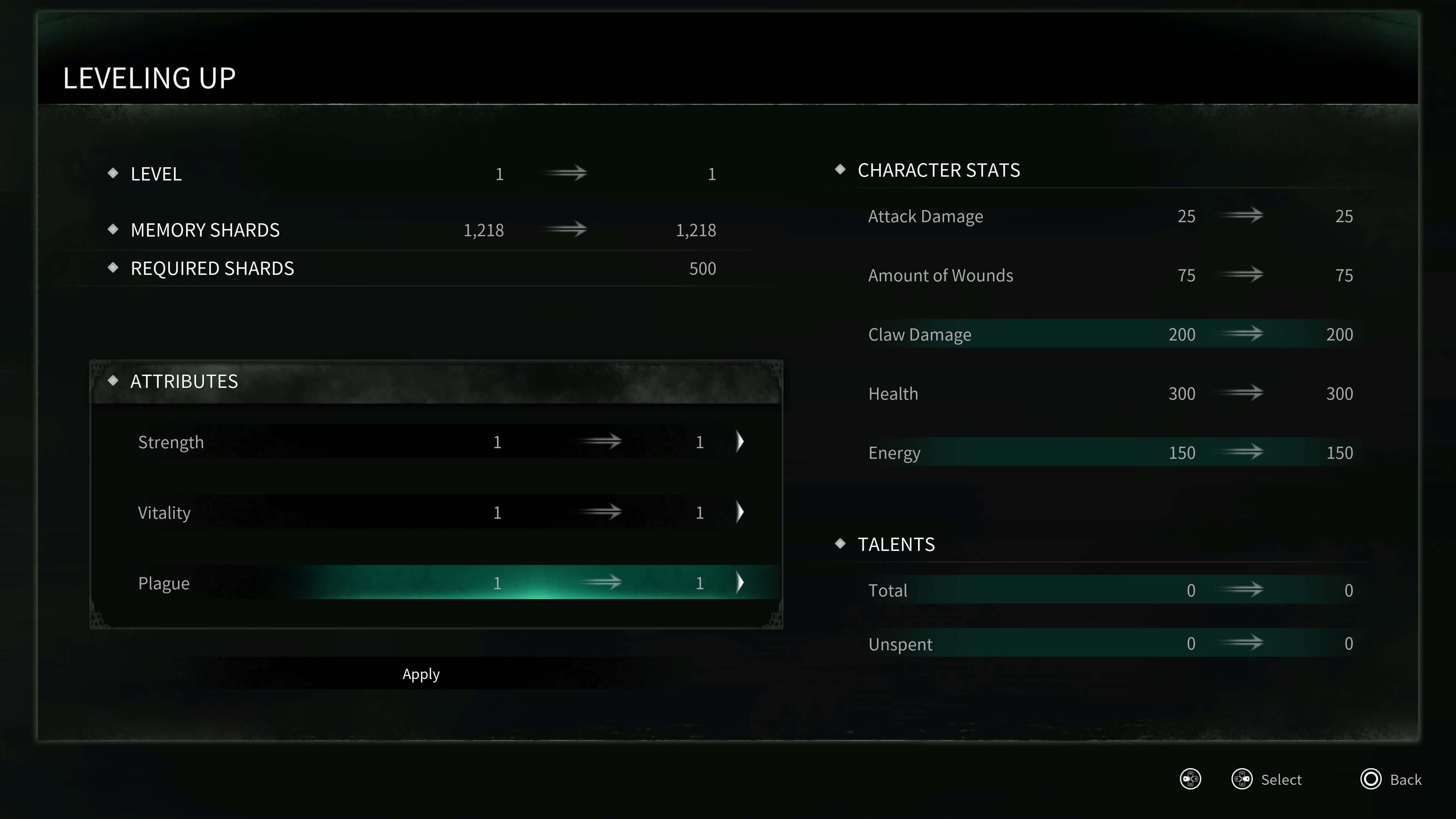 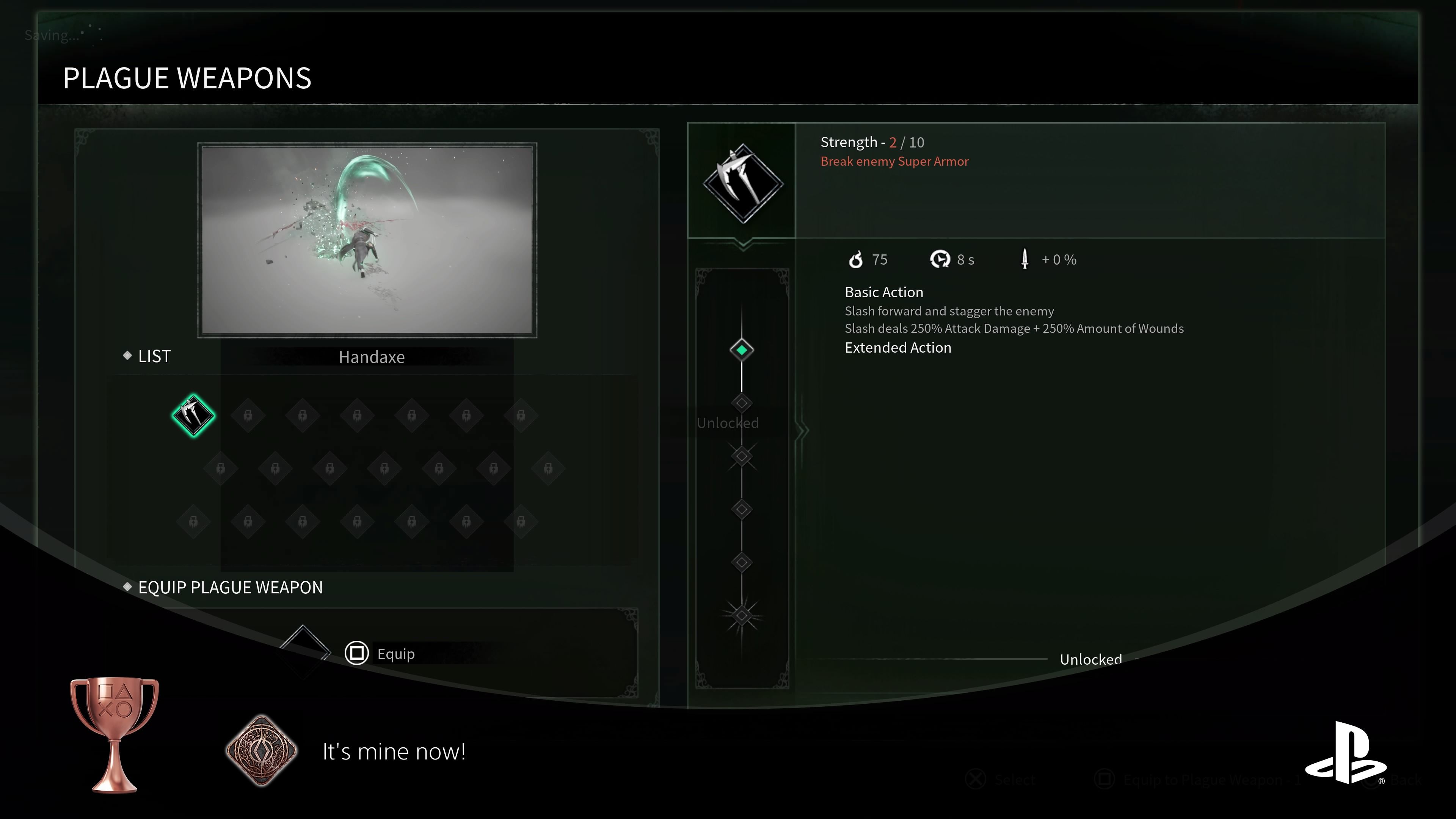 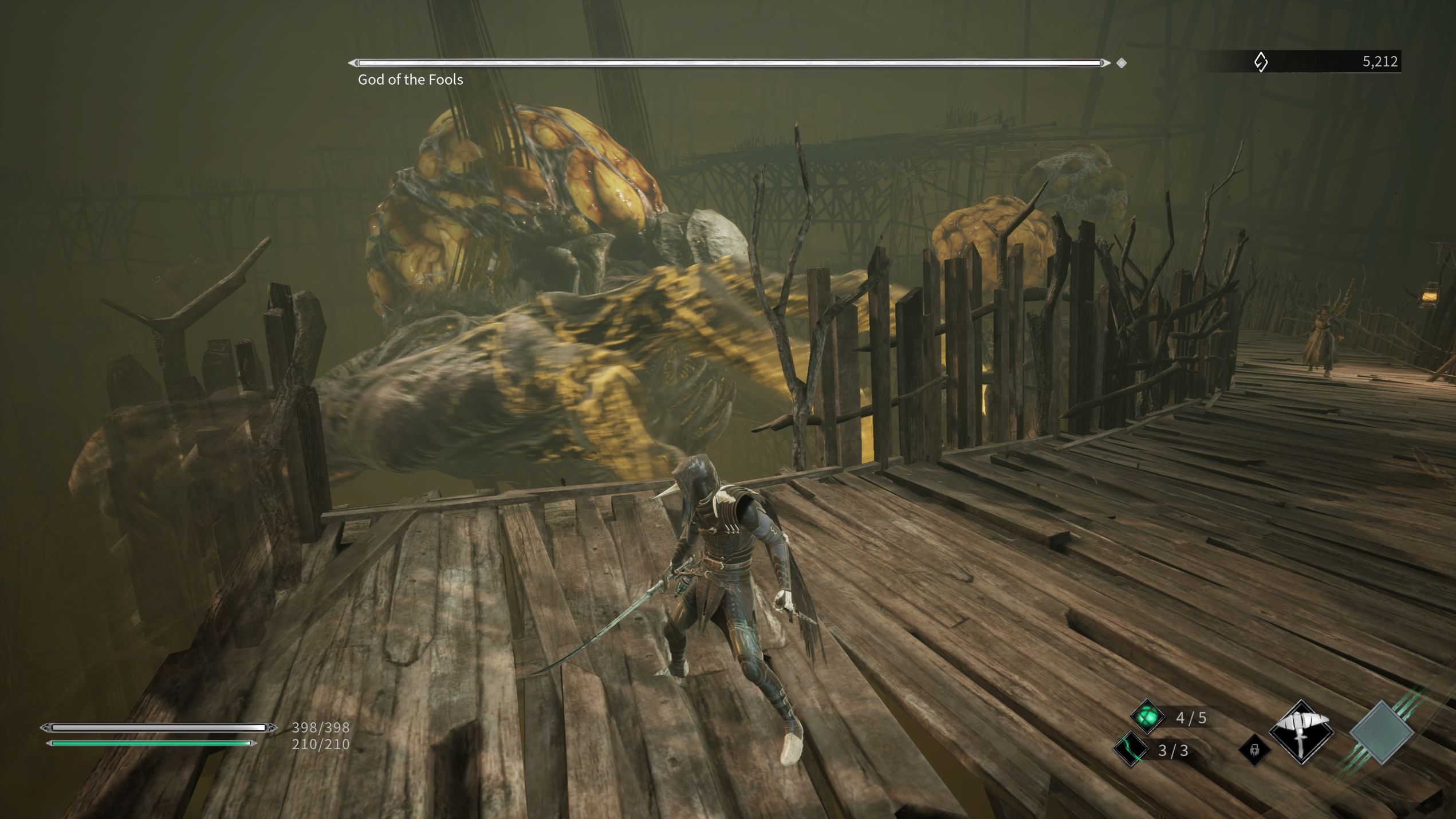 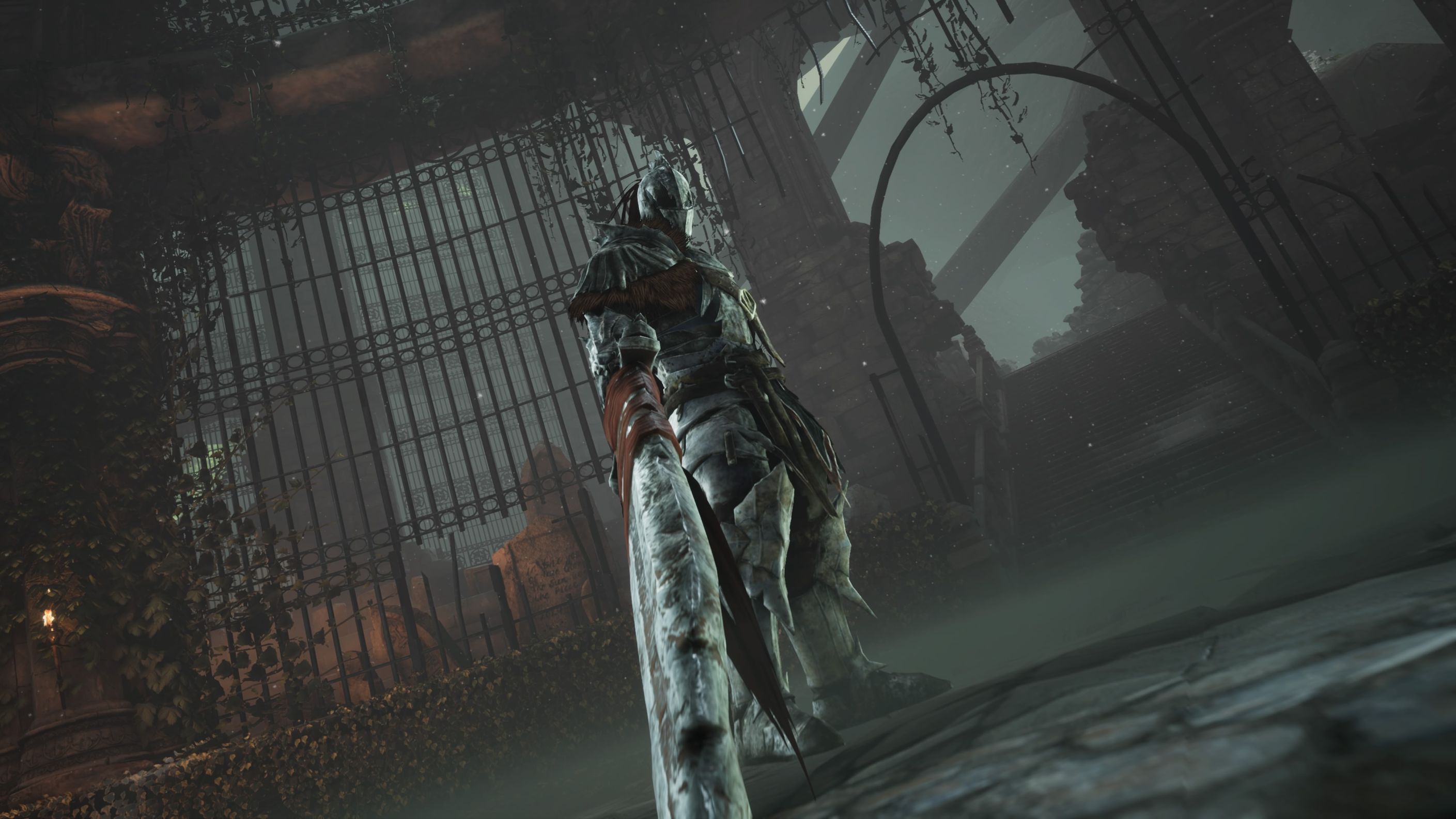 With rather simple RPG mechanics when it comes to your personal points of improvement, boss fights are the opposite end of the blade that will train your sanity at first. Later on it's just R1 this and R2 that! Boy, I loved the boss fights so much!

Technically the game is polished for PS5 platform, I had only 1 issue when I was stuck in some wall, the rest was fine. All boss fights are magnificent. They give almost all grade points. Lack of animations, clunkiness, mediocre exploring, cool but simplistic level design is how I would explain this game in few words. Plus, the mentioned boss fights of course!

If you crave for a game of your favorite genre and this one showed up on your radar, just go for it. If you’re looking for an experience of your life that combines soundtrack with a story, nothing to look for here. Not a bad attempt for the first game of this studio, but the second one must be far better to hook us up. Still, I love fun, and I had fun, I think that is what matters.

"If you want a “quickie” with your favorite genre that will shine during boss fights and the fast-paced combat – go for it. Otherwise, just play From Software games."