"Boobs, nail gun, darkness, a lighter and only one eye. Yes, that is you, a young girl placed in the mansion where demonic s*it is about to consume you. Of course, you are the only one there, and you are wearing only short skirt. Perfect? Almost!" 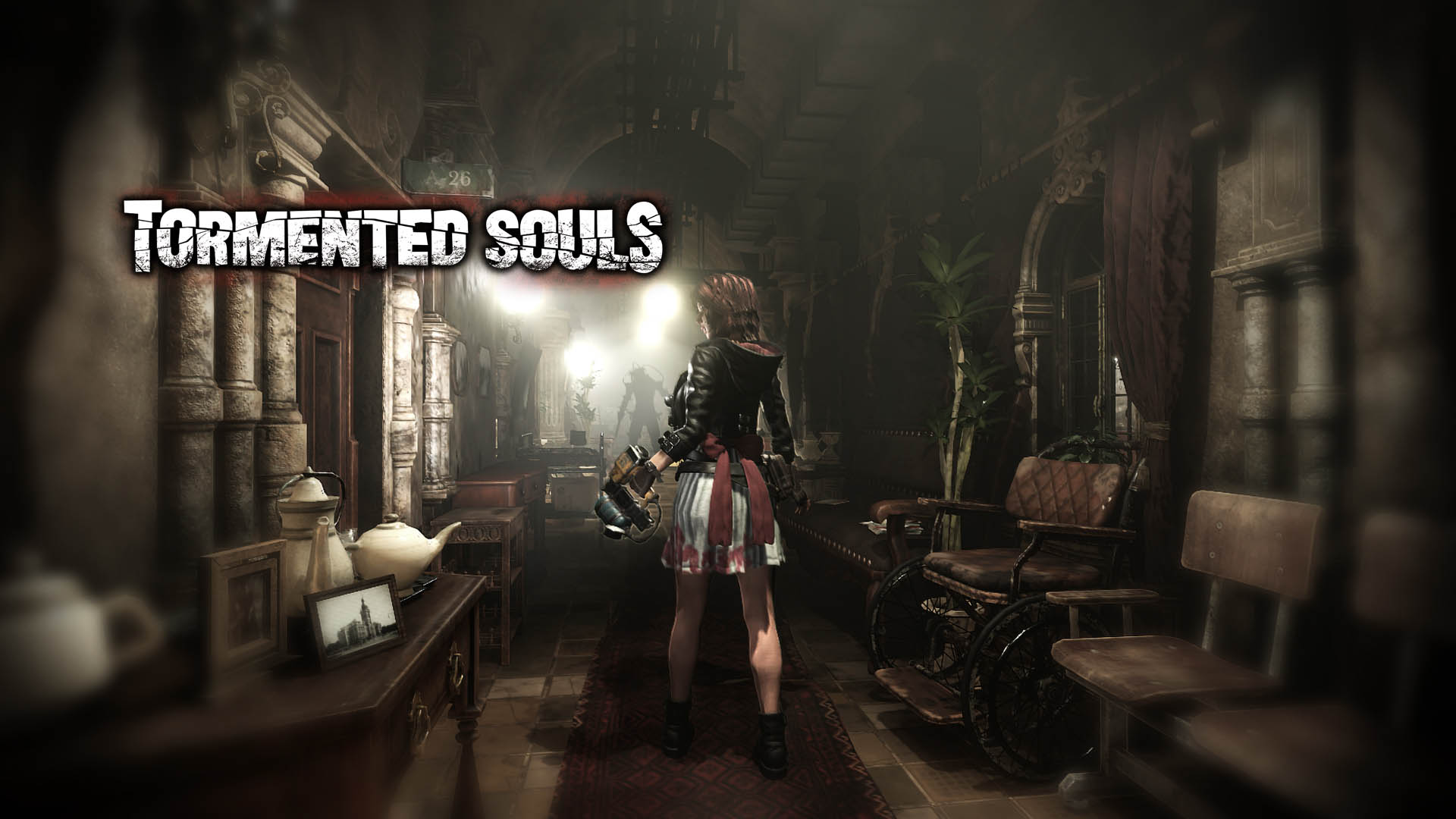 Survival horrors were always the reason why I couldn’t fell asleep when I was younger. Yet, watching someone play them lowers the fear, and over the years that fear just disappeared. I also love them old-school, you know, with the awkward camera, tank controls and bad acting.

Tormented Souls has been developed by PQube team, and by the looks of it, this is their first “bigger” indie title. It “caught” my eye when I first saw what the game is. If I was to explain it using just few words, it would be: “Old Resident Evil meets Silent Hill, just more nude”. Everything from the game just “screams” that vibe, which can be your first cue whether to play it, or not. 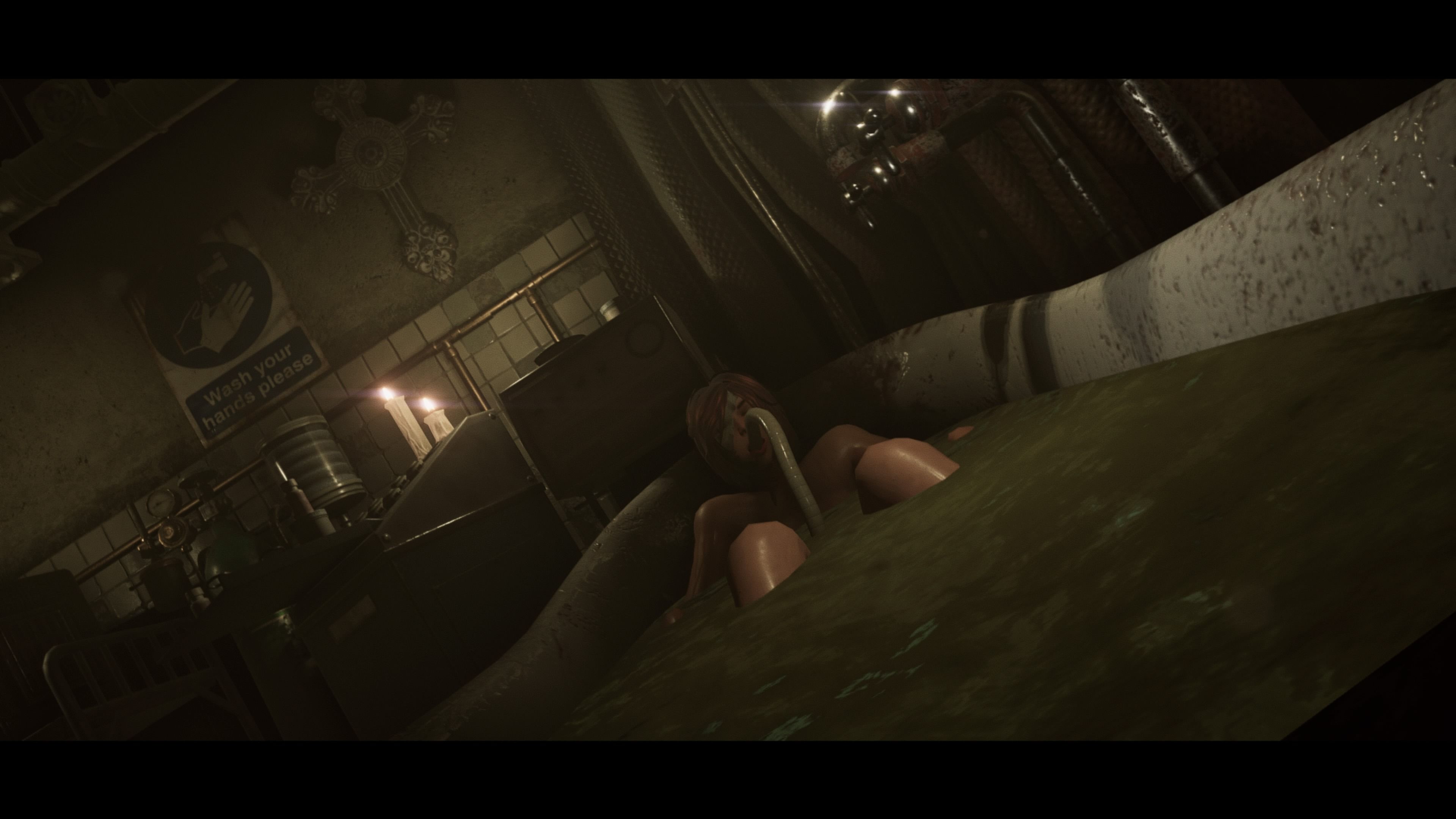 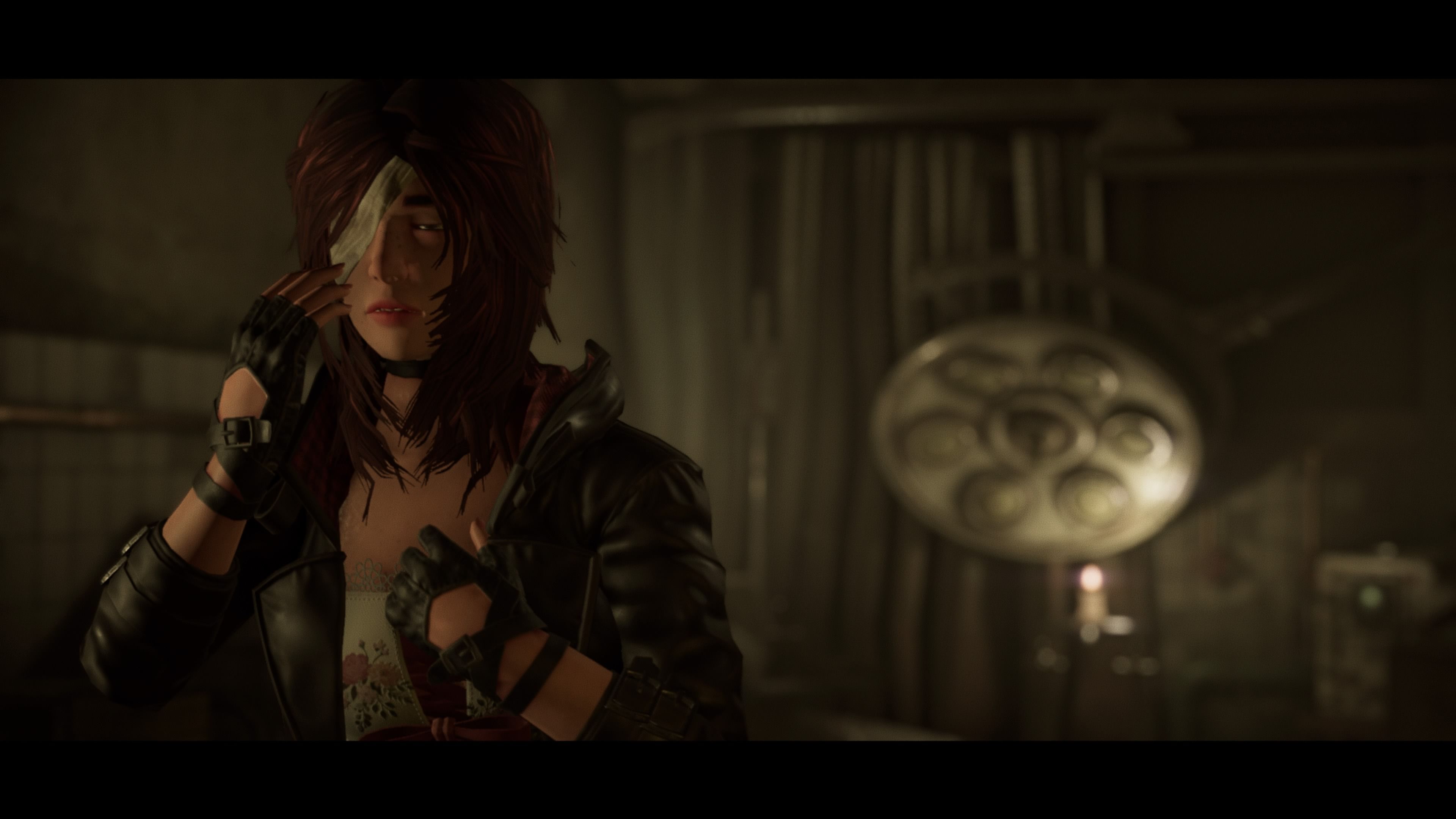 First impressions were kind off bad, and by that I mostly mean the story, voice acting, and animations. Beginning of the game made no sense whatsoever, few lines of text accomplished by the voice of protagonist and some weird letter with some picture of twins... Then you get one and only animation where you see some bad quality frames, and finally you arrive at some mansion (of course, what else would it be?) were everything starts and ends (and you lose your eye, just like that! Who would’ve guessed it)? You will unravel all oft that, but in my opinion, it didn’t live to its expectations (which is also ironic; after this start I never had any when it comes to story).

Even the in-game characters (which aren’t many) felt equally bad, their movements are too stif, which is weird, because when you control your character it doesn’t seem like that at all. Anyway, forget about the story, forget about anything meaningful on this terrain. I don’t dislike the voice acting, but on many occasions the intonation felt off. I guess they went with the atmosphere, diaries, and spookiness to show the highlights, and that part is decent. P.S. there are boobs at the start of the game. 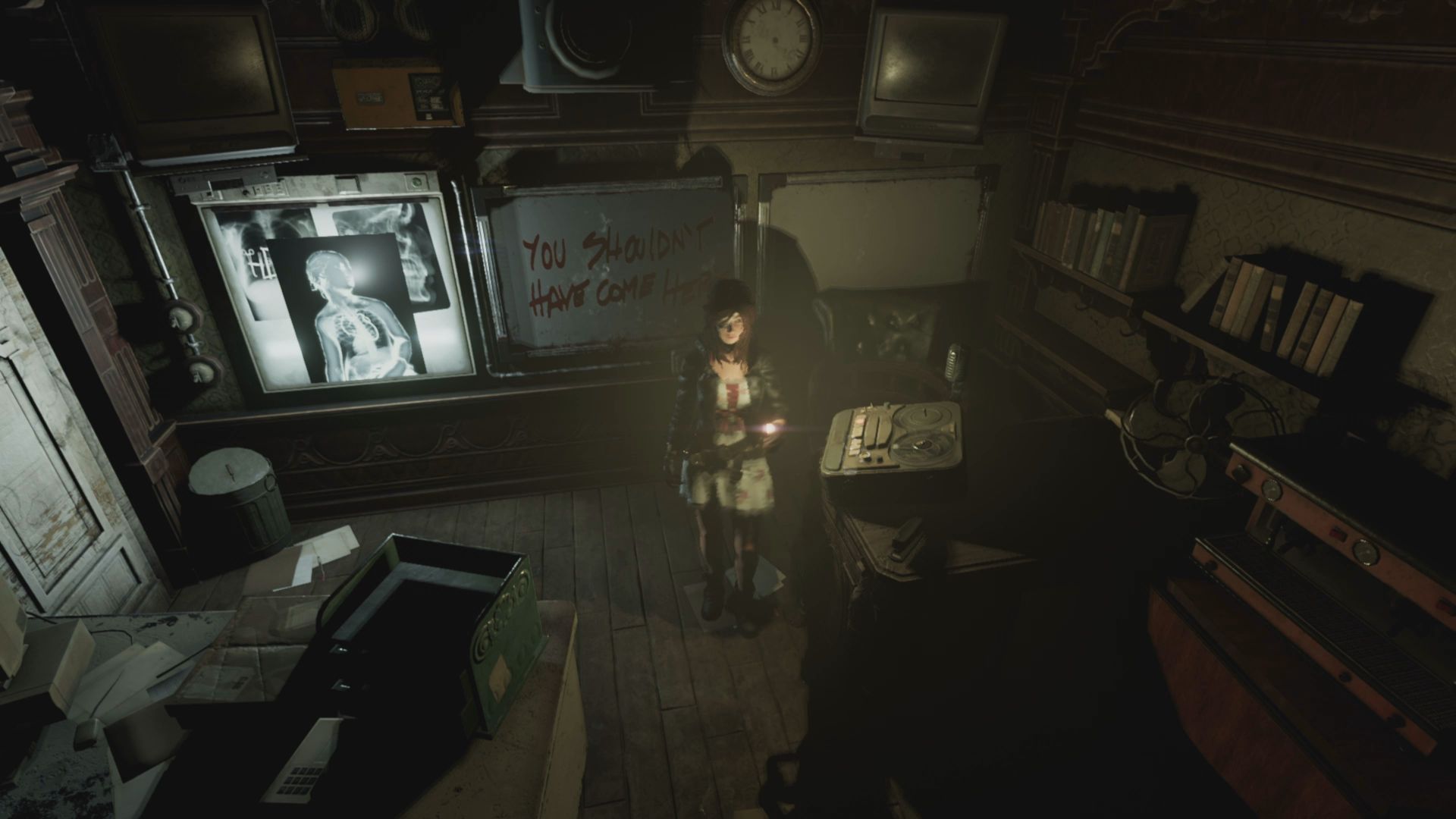 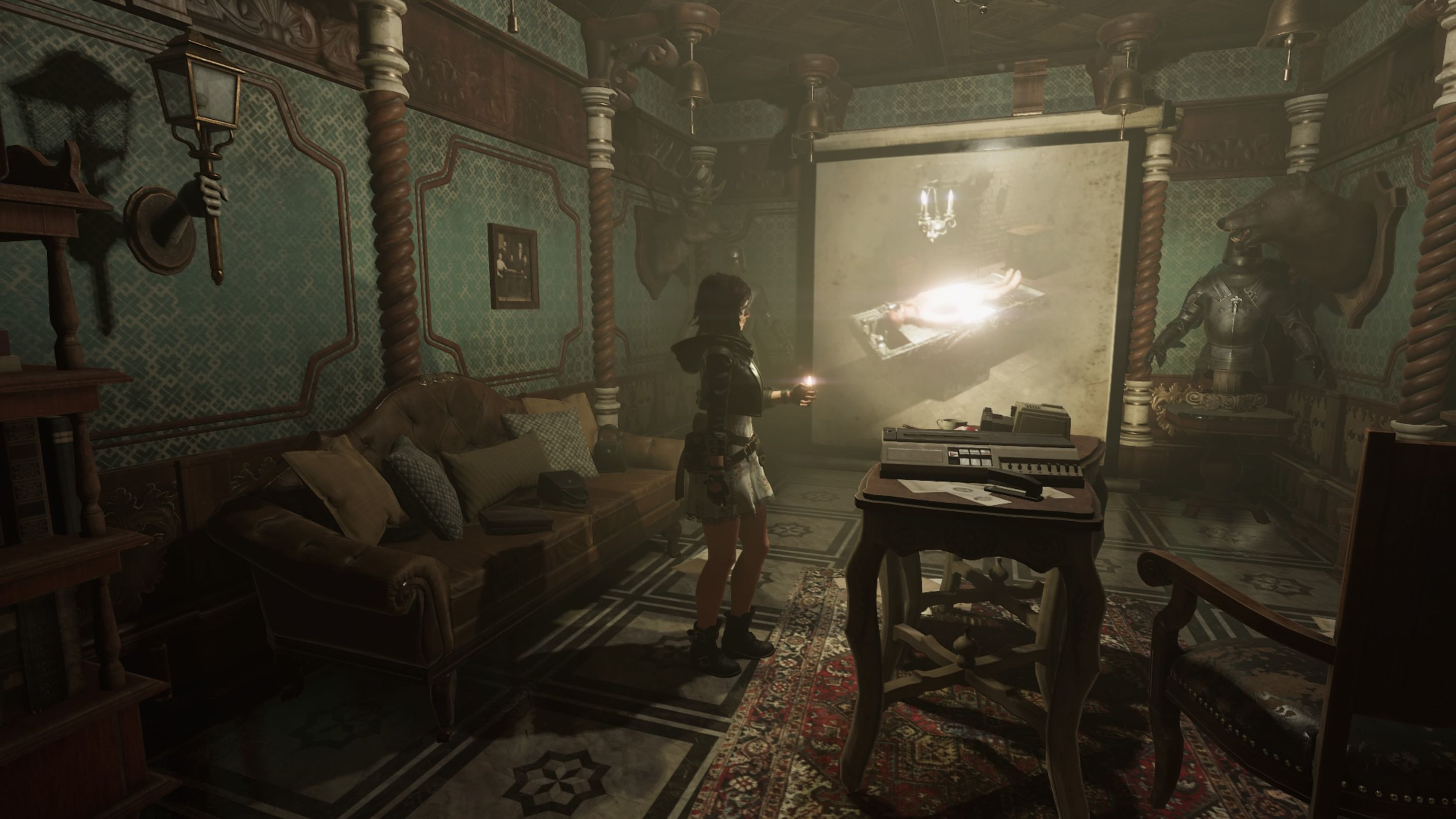 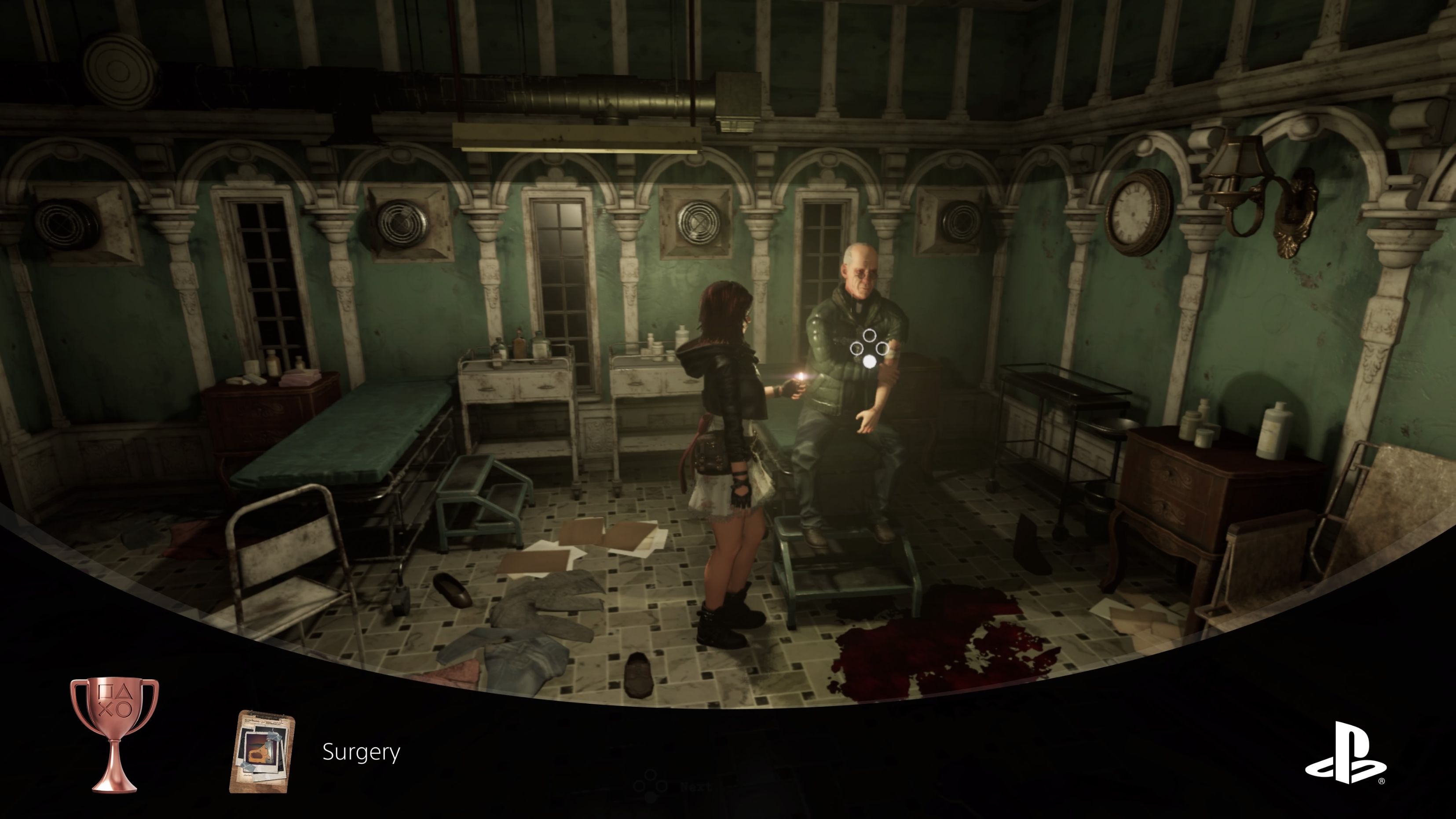 Alternating between dimensions, entering mirrors and tapes... One would think the story is some heavy trip, but it just isn't. Remember the priest (Silly me, after listening to him you will have a hard time even forgeting him). Oh, and welcome the recorders for saving game!

Enjopy the parts where the game takes the most inspiration from (from titles mentioned at the beginning). Music is familiar, it “crawls” under your skin the longer you play. Save rooms use the recording tape, bullets (nails) come in familiar packages, everything is as you already experienced and probably loved. The nostalgia trip is real.

What is good is the whole structure of the mansion and its branches, the idea of traveling (which I don’t want to spoil for you), and man, the puzzles. The puzzles are awesome! I had to do some serious thinking and reading to solve some of them, it’s heavily influenced by titles with complicated puzzle designs. I solute that, I really do. It makes your playthrough fun, it makes you think and use your brain. The inspection of items in your inventory and adjusting to fit the goal is also cool, often simple but a welcome perk. Your inventory will hold all items you find, so don’t worry about running out of space and such (good that they decided to go with this direction).

When you “dig” the atmosphere, you will dig the game as well. Traveling through every room feels nice, every room is unique and interesting. The structure is yet again like what we’ve experienced in early survival horrors, but I didn’t mind it considering the game introduced its own design and puzzles. Even the backtracking feels good, probably because they balanced the routes well, meaning you don’t need to travel 10 minutes to some older point to progress. Shortcuts are well placed, new routes opens at the right time, enemies are placed strategically etc. 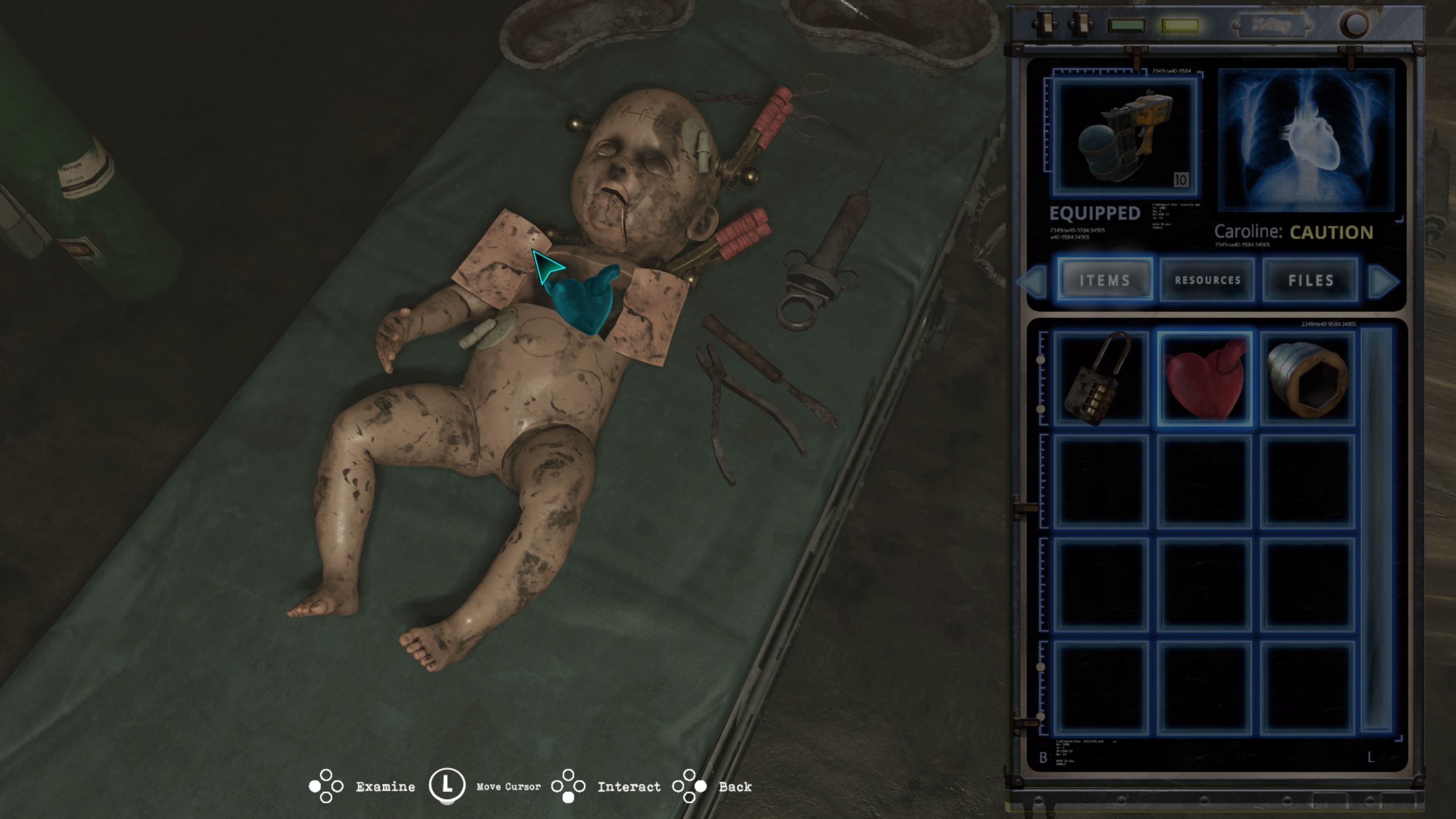 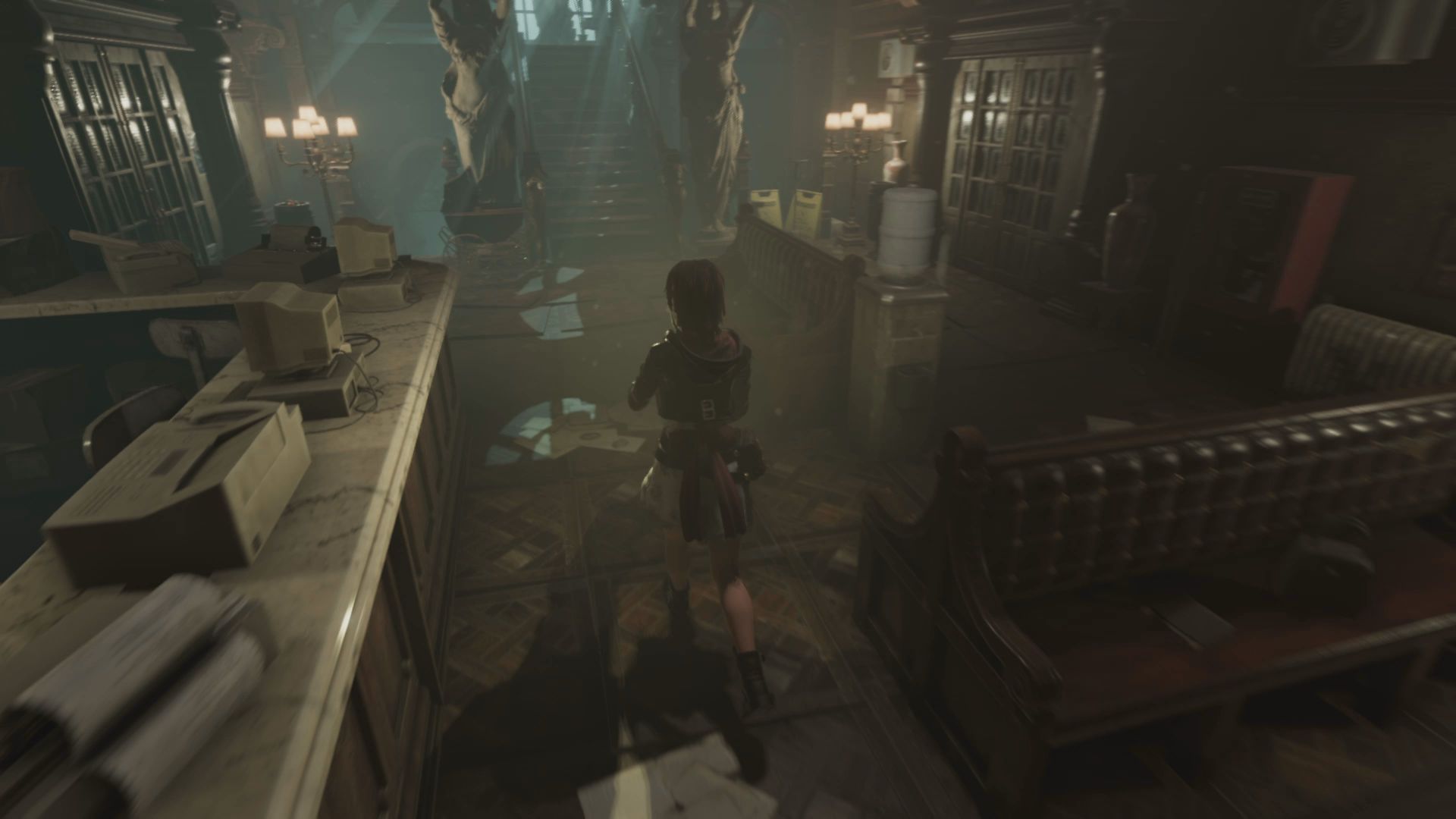 I had some issues with where to go next, it's not the easiest thing to figure it out. Some puzzles are not so hard, you just have to combine items and use them in the past so they can take effect in the present. Also, last pic shows the main game hall, the Main Hall (love the game design!)

If you ever feel nostalgic, you can use the D-pad controls (tank controls!) and play like that. I don’t recommend it. Even the optimal gameplay style is somewhat clunky, enemies will reach you even when you don’t think they will, and camera will kill your patience. I do love the camera style, it fits the game perfectly, but often angle change also mess your movement direction. You will end up running all over the place, and you will often be confused from which direction you came.

Combat is also weird. The aim is not a problem as it auto-aims, but I was often damaged by enemies even when I shouldn’t be. They stagger when you shoot them (using the Nailgun, Shotgun made of pipes and some weird Electric gun), which works right until they move closer, then you’re screwed. Weapon handling is a mess, the whole combat is too clunky, and they need to fix it. I don’t think that can be decent any time soon though.

Fun fact – it’s a survival horror, but if you pick up all bullets, you can kill all enemies in the game. Neat. Also, not much enemy variety, there are few enemy types and even though they are disgusting, I would love more of that (the chaser is cool though!). 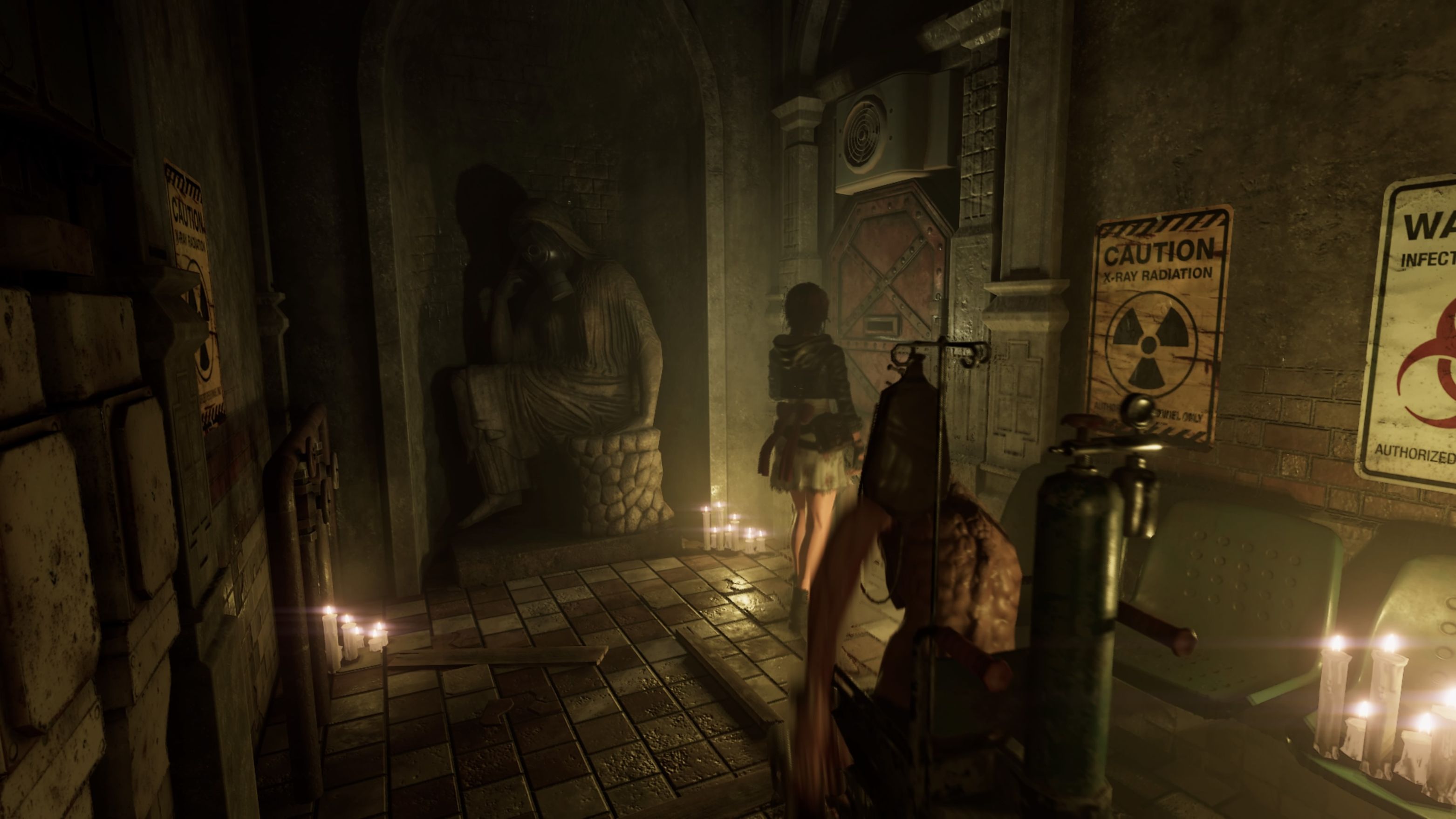 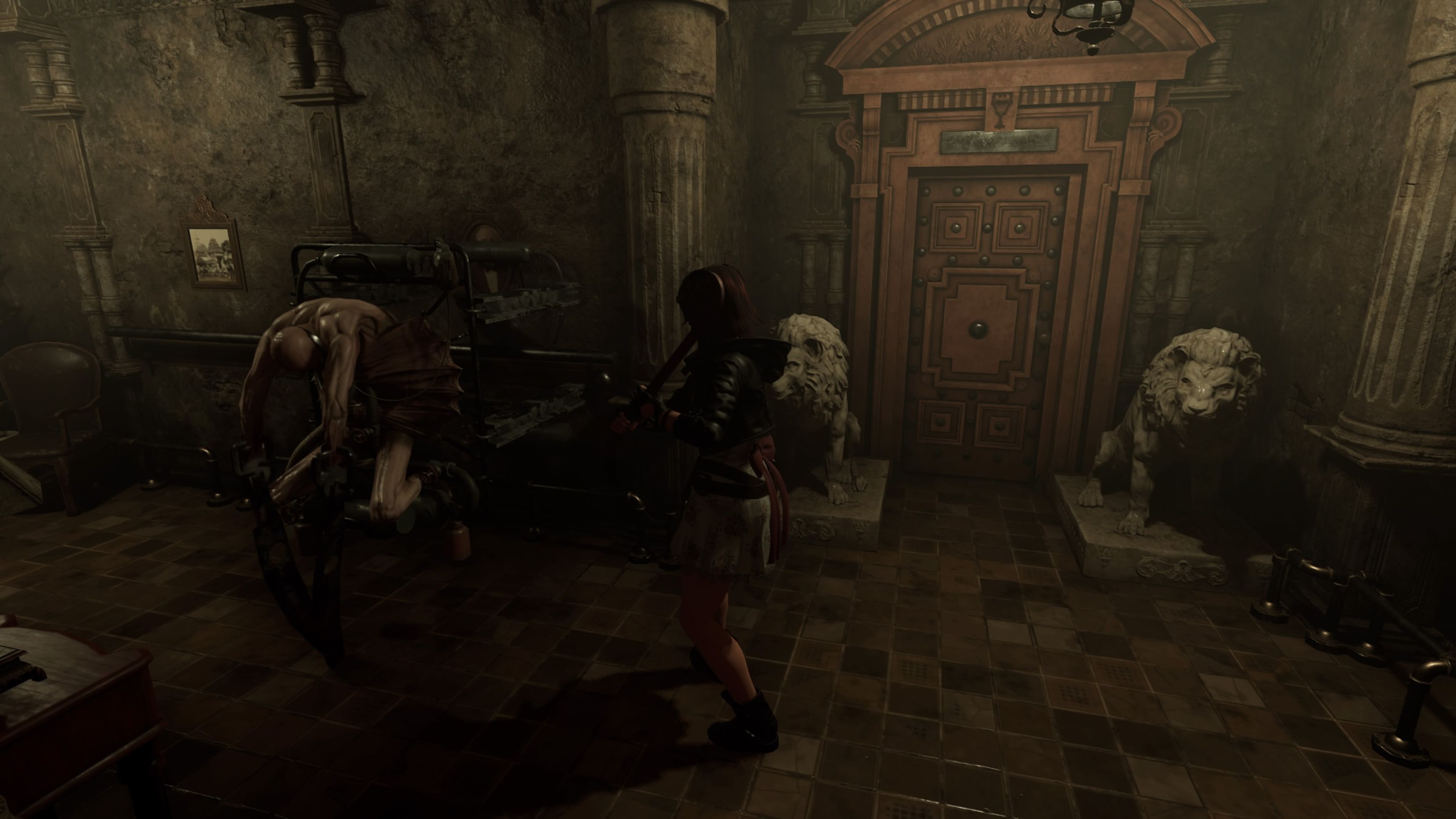 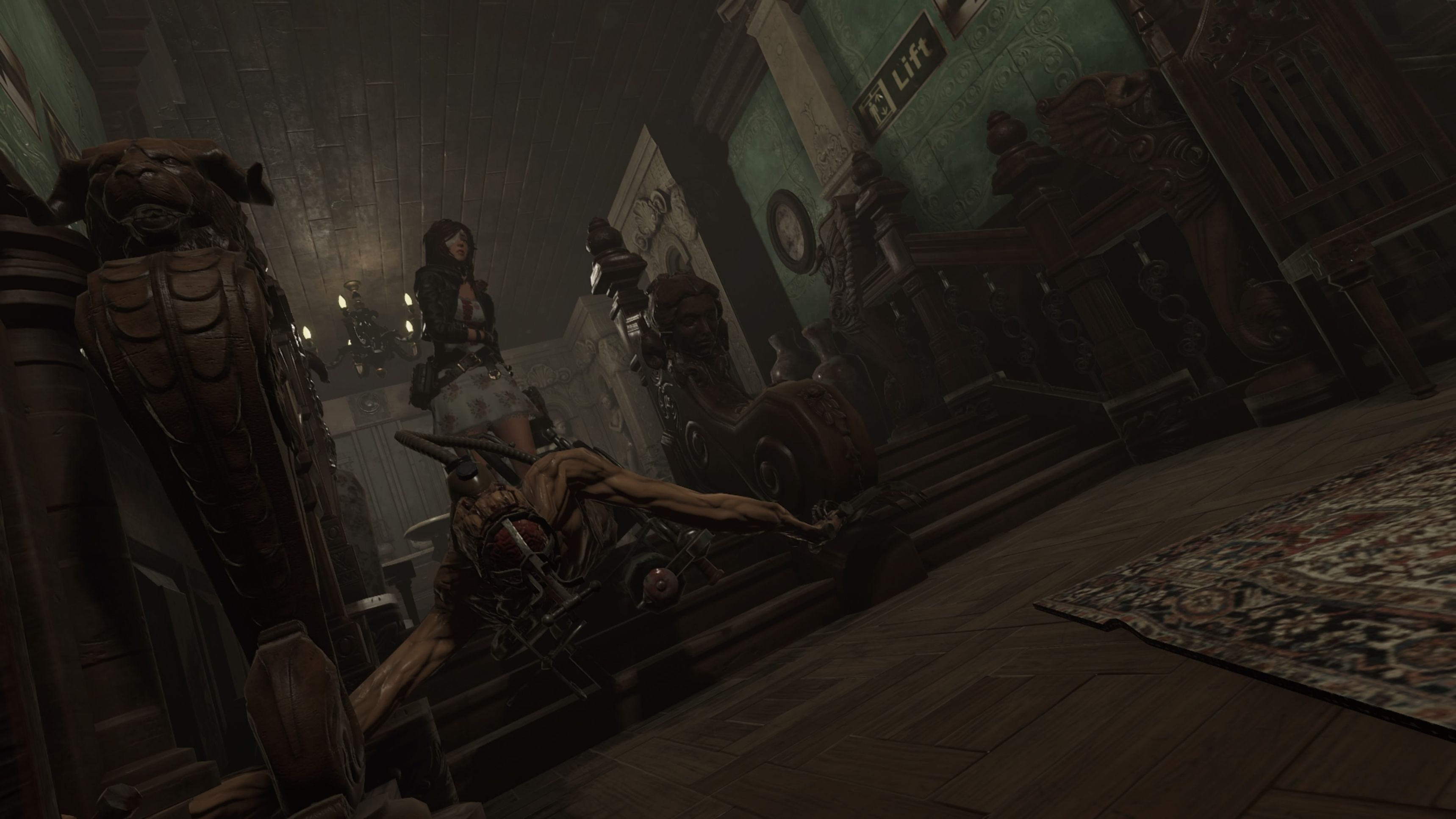 How do you feel about shooting these creatures with a Nail gun? It felt awkward, but I guess the Nail guns usually are. It's cool how dead enemies still lie down still even later in the game (if they don't add new ones, that is). Running is not an option (you will get stuck, and you will get bitten. Sorry, cut).

I think it takes around 10-12 hours to beat the game if you don’t read any guides. 6 with a guide, 2 for a speed run. After beating the game twice, I can’t say I’m bored, I really loved the whole mansion design, atmosphere and cold depression that reeks from the TV at all times. The in-game graphics are nice, music is spooky, great puzzles… It’s exactly what you can expect from game inspired by early genre representatives.

On the other hand, it felt cringe trying to keep up with the scenes and the story, it felt bad when it comes to combat, and it certainly raised some questions about the game nudity at the beginning. So awkward, the priest is so awkward and bad. Add some technical issues (had 3 crashed during my first run) and glitched trophy for 1 ending (out of 3 endings), so you might want to wait for that at least.

I miss some epic boss fights; the last boss is a wuss. Maybe more weapons, and better handling? More animations, better story explained properly? Those are just tip of the iceberg. If you crave for long-lost survival horrors, I recommend this title by all means, just be sure to lower your expectations accordingly. The atmosphere, the puzzles and the mansion design are great, and if you ask me, it makes the journey worth your time and money.