"Awe you weady to enjoy this pweaty game? If you think this was irritating, try actually listening to characters in this game. If you get pass this and like the series, you may enjoy it!" 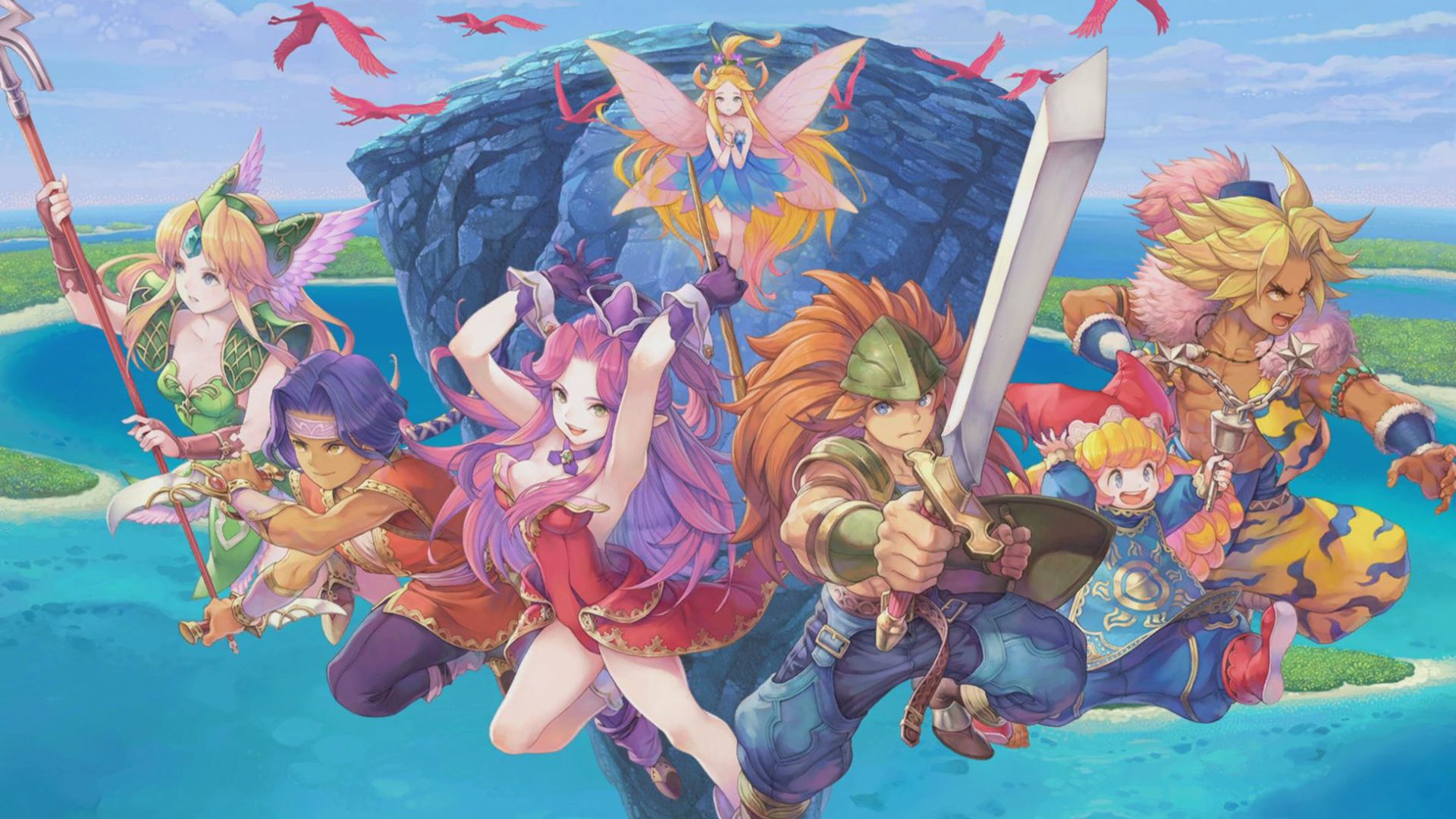 We are getting a lot of remakes these days. Trials of Mana is yet another title to be added to that pile. If you think Mana, you are going back to the SNES era where this gem represented third title of the series. It was transformed in full 3D and you can now play it on your favorite consoles. Having Square Enix behind is also one of the things to be careful about. Let’s start! 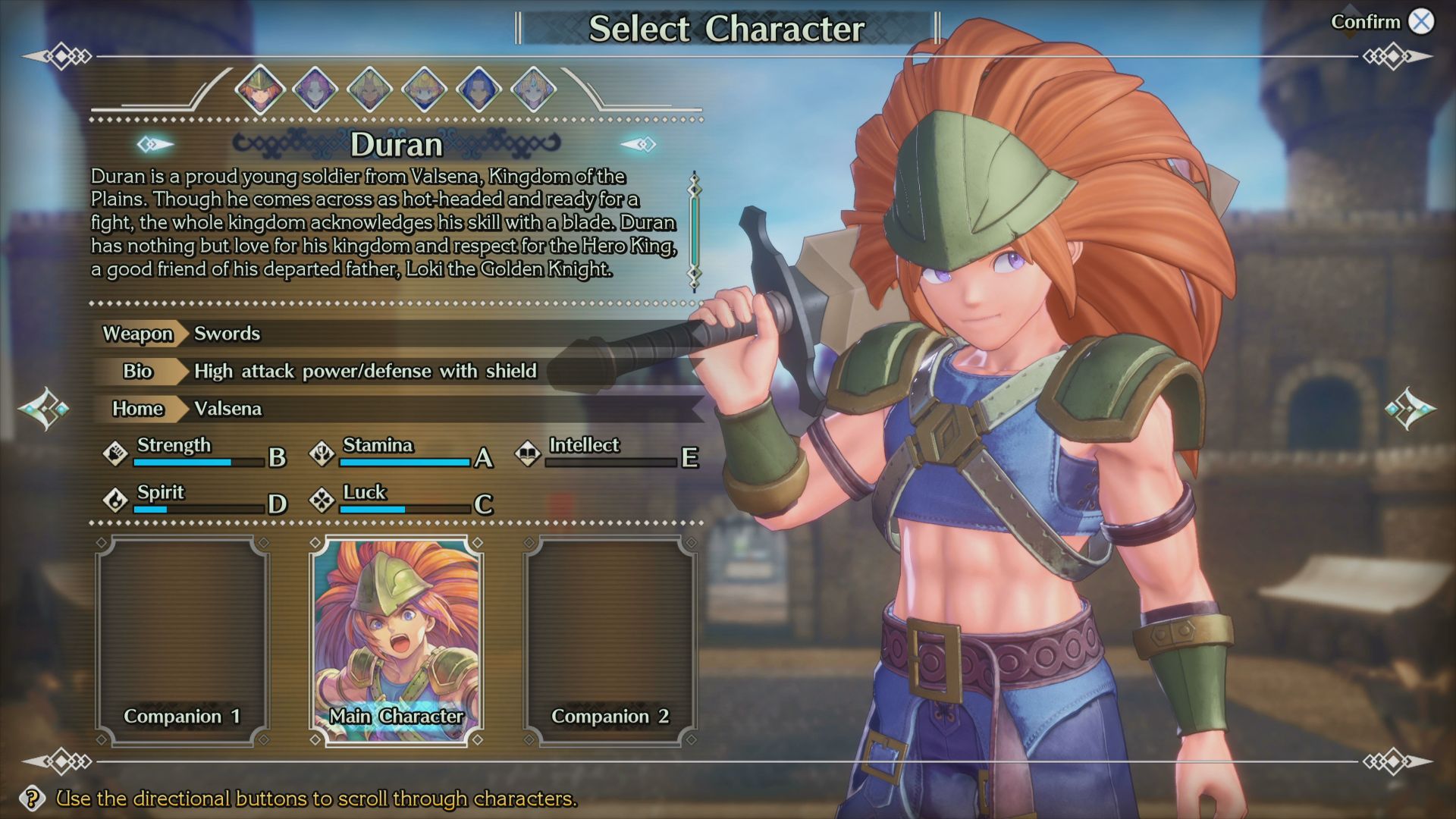 Somehow, I always end up playing as Soldier/Paladin.

My first encounter with Mana games was the Legend of Mana on PS1 – an action JRPG, simple and fun. Trials of Mana is following that formula and it is important to mention that it really looks up to his father. Music and melodies will awake that nostalgic person inside you – even if you don’t have any connection with the past, it’s what will get you first.

The rest is basically the same for every choice. During the story, you will have the opportunity to play as starting chapters with your chosen companions or just watch short scenes to get familiar with their perspective of events. I suggest just watching instead of playing, as you cannot transfer any items nor progress to your main story. 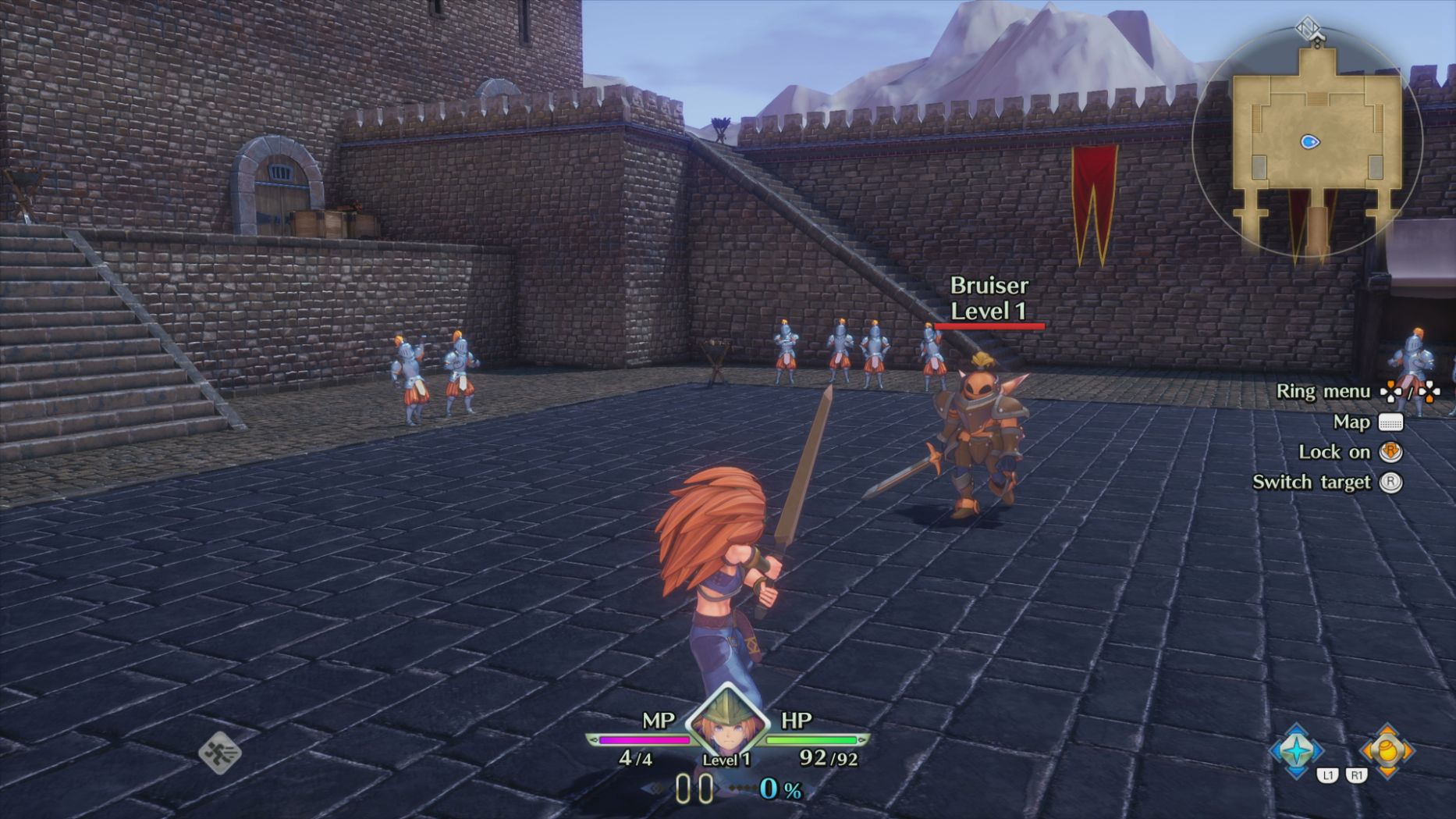 The first battle with tech you which 3 buttons wins the game.

Graphics are anime-ish cartoon-ish child-ish and they are nothing special. Not much will change during the game, so don’t expect some beautiful landscapes. Even the action in this game gets just few upgrades and doesn’t run from its simplicity.

When it comes to story, you will experience it as a view from your hero’s perspective, the world that is full of fiction and revolves around the tree of mana and its connection with the world. In short, you will traverse different regions and towns while fighting with skeletons, rabbits, birds and other enemies. You know the drill by now. You can dodge and jump or combine that with 2 types of attack. All in all, it is very simple and easy, so try playing on Hard if you want to experience at least some difficulty. 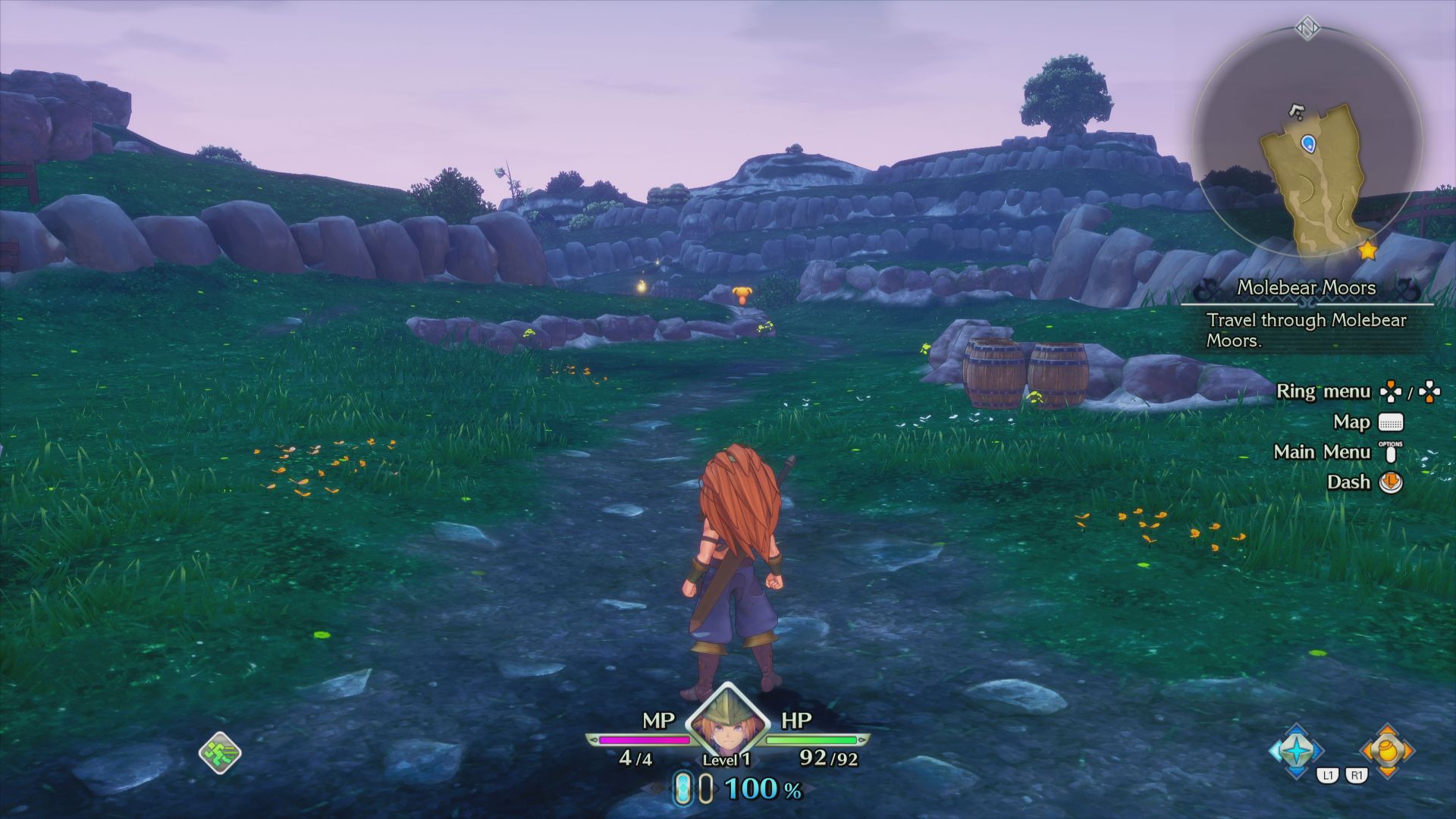 The first dungeon looks nice, but every next one is quite the similar. I miss a little bit of uniqueness, life and I really dislike the backtrack mechanics in this game.

The locations are also quite linear and short, even though there is a certain freedom of exploring, but it all narrows down to being linear. Map is decent though, detailed as it needs to be. They did a great job. Its one of those games that will mark your path and objectives all the time, so there is almost no possibility to get lost.

That simplicity can be a problem. All town are similar/same, with NPCs that are a re-used asset. Almost nothing here feels unique. There were just a few towns that stuck in my head and that I will remember. The same is with the other locations.

Exploration is narrowed down to harvesting of treasure boxes, but they wield such ridiculous prizes, it can turn you off from even caring to find them. On top of that, you will find only 1 real side quest – collecting cactus from various locations in the game. Literally there is nothing else considered as such in the entire game. So, go for it. I love the segment of side stories and quests; which here turned out to be a minus. 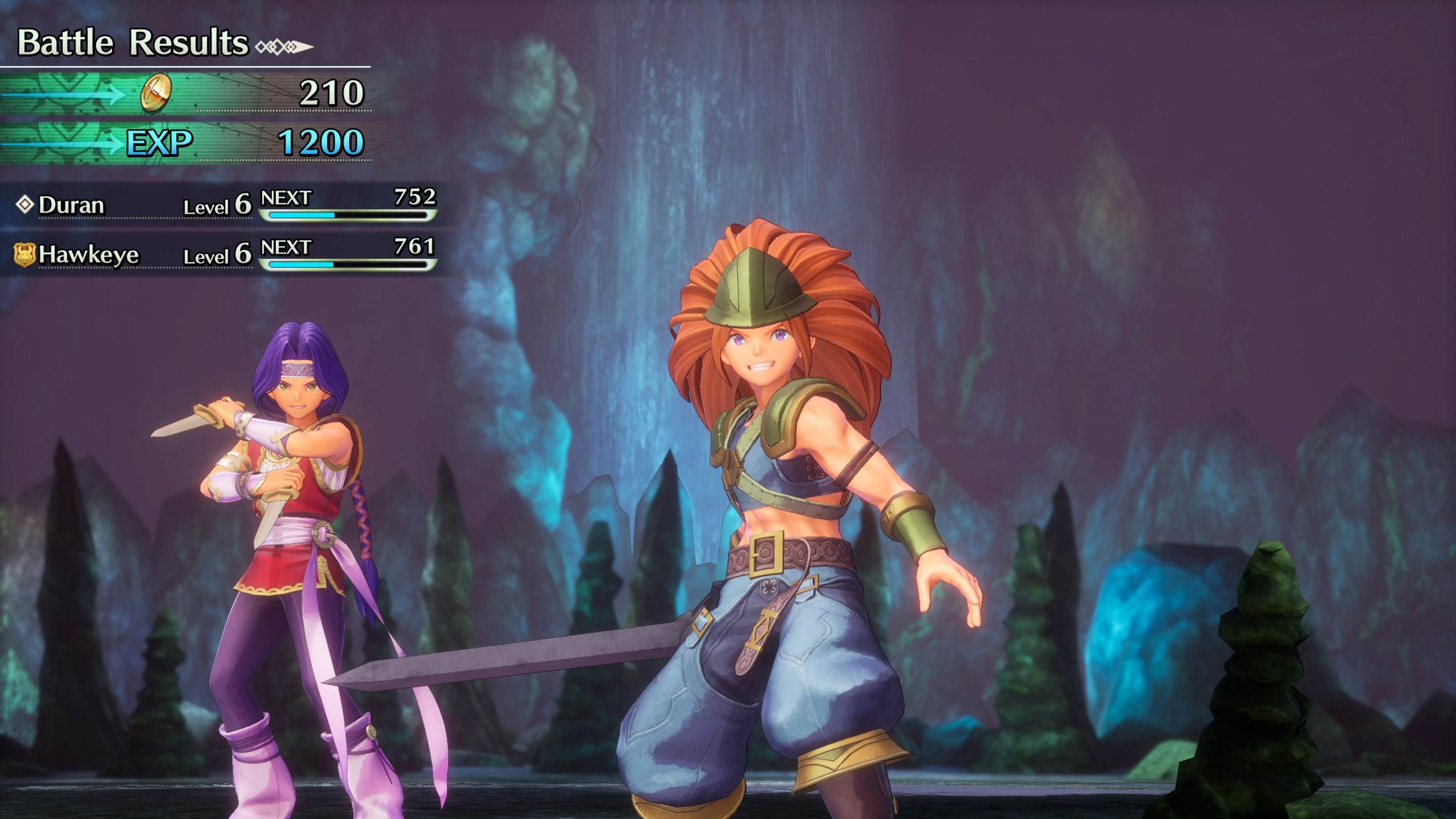 The most-fun part of side content is watching level up bar as it gets filled after the battles. Add bonuses to that as well! Of course, I’m being sarcastic…

Non-existing side content can be a real problem. The story and the voice acting in this game are terrible. There was one character in the game that was irritating as hell, now it returned with the voice and this is just one big no-go. I mean, the voices are not bad at all, but the intonation and pacing are way off. I just couldn’t get into this part at all. Even if I did, it is way to simple.

I just don’t care about any of the characters. “I must get stronger and defeat the evil sorcerer” - and shouts like that are not helping. 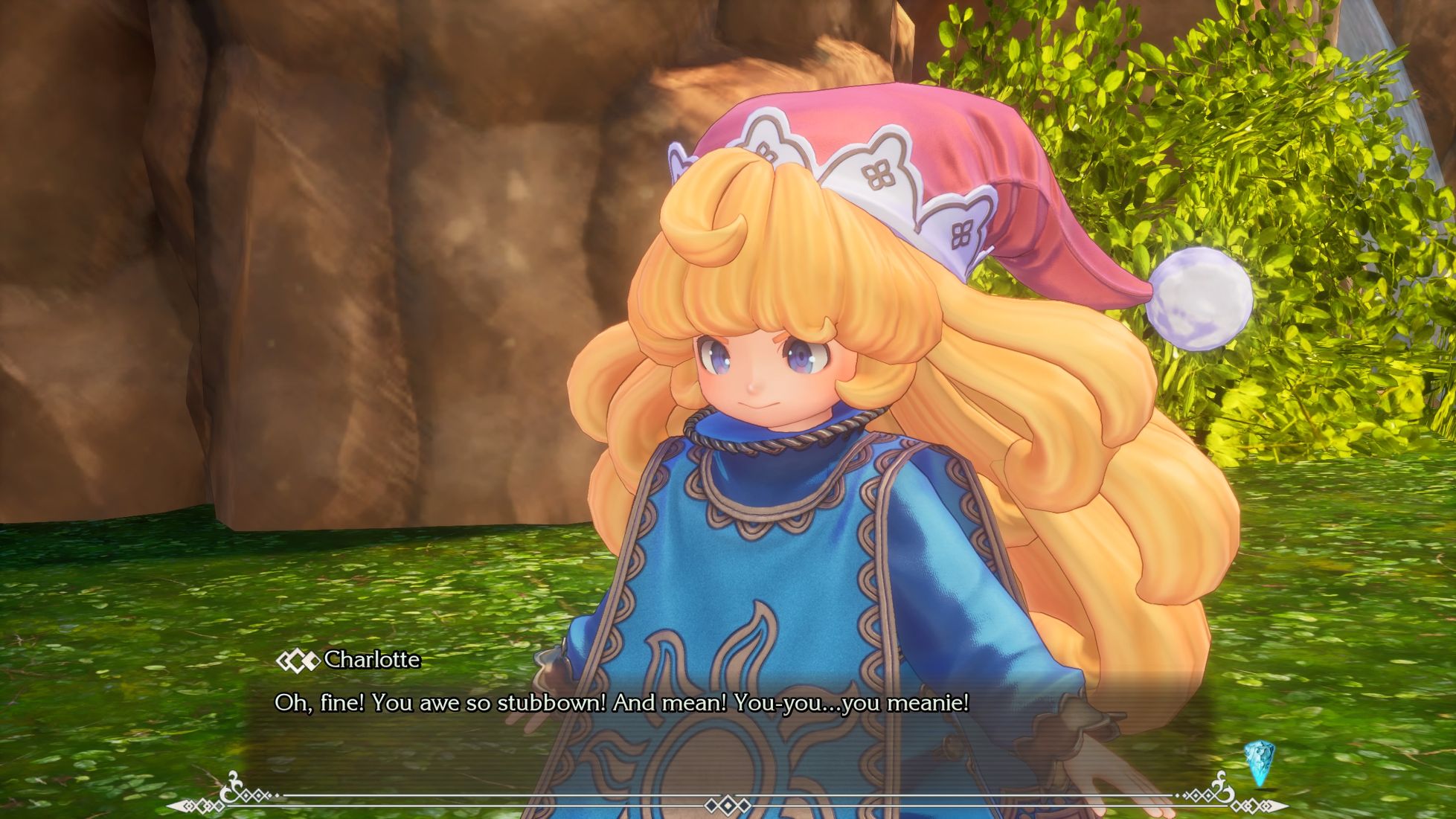 “Pweaty pwease” is what she is all about. And she uses nunchucks. What a weird character.

Alongside of the music, class progress in this game is the next best thing. All characters come with their own class, plus you can develop these and choose to be the dark or light harbringer. Pretty sweet if you like this kind of RPG.

There will be a couple of class tiers, but I will leave this to you to explore. If I go deep on this there will be nothing else to experience while actually playing. The only thing to mention is that every new tier opens one (yes, one) new combo attack and unlocks new special move. The rest is about adding points to your strength, stamina etc. That will unlock new skills/magic moves or similar. 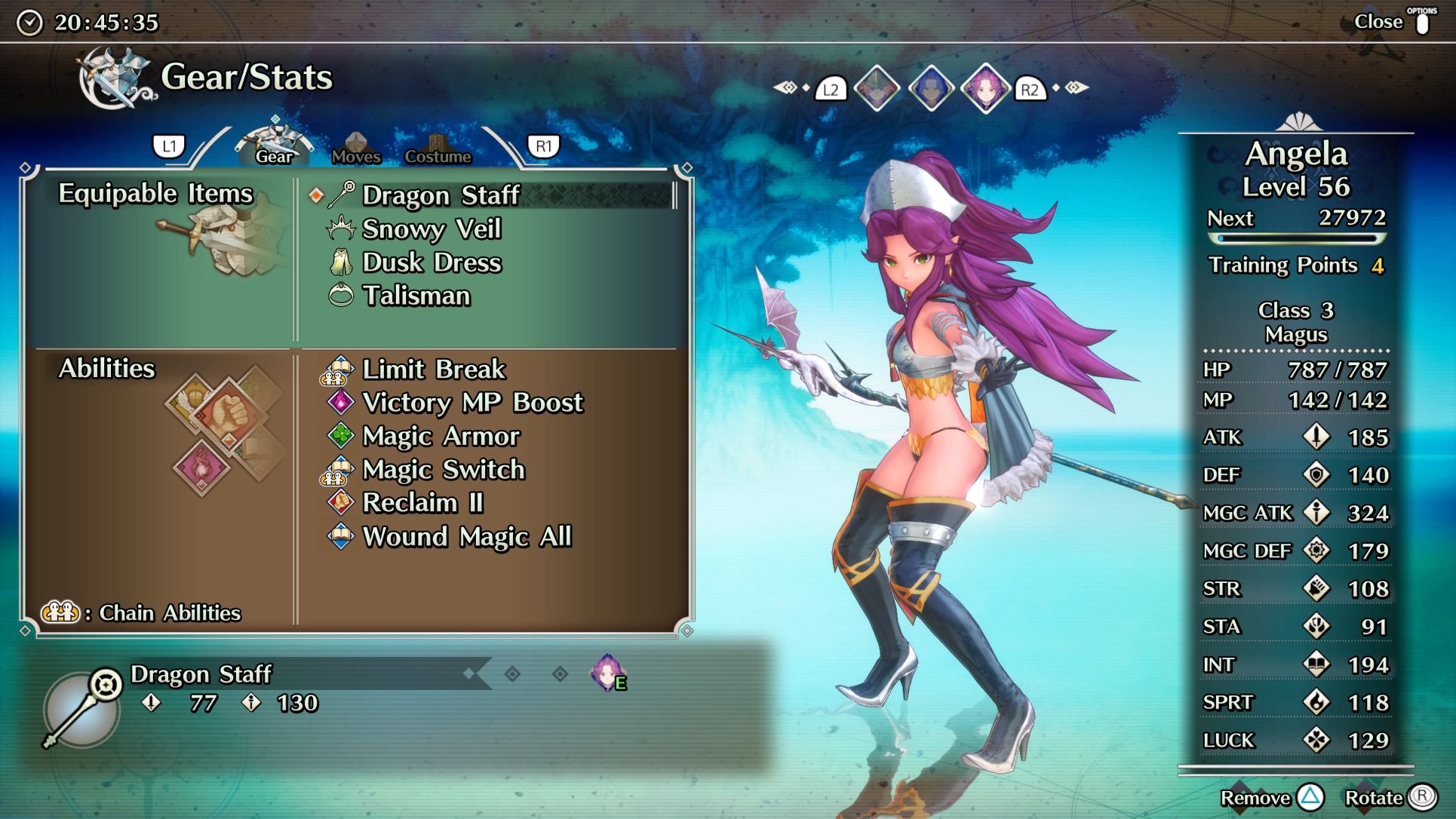 The bigger the class tier, the less she wears.

The preparation is important mostly on Hard difficulty. Even there you will have to micromanage only few times.

I can’t say I was bored even with knowing all these facts about game being simple. Variety of enemies is not colorful as well. But expect playing 90% of the game using the same button and mostly the same tactics.

The worst comes when you must jump and aim. Omg, the flying bastards and the camera in this game. I don’t know how this passed some quality gate or if there even was one; camera in this game simply sucks. Aim, jump and attack sounds so simple, but believe me, it’s not. Why even adding the jump in the game where you will curse every single time you actually use that feature?

The boss battles are better, but also repetitive and easy. There is almost no need for real strategy. The only thing you need to think about is weather you have enough healing items. You will need those, AI of your companions, even when you set desired strategy; simply sucks. They will not dodge lethal boss moves and they will die a lot. 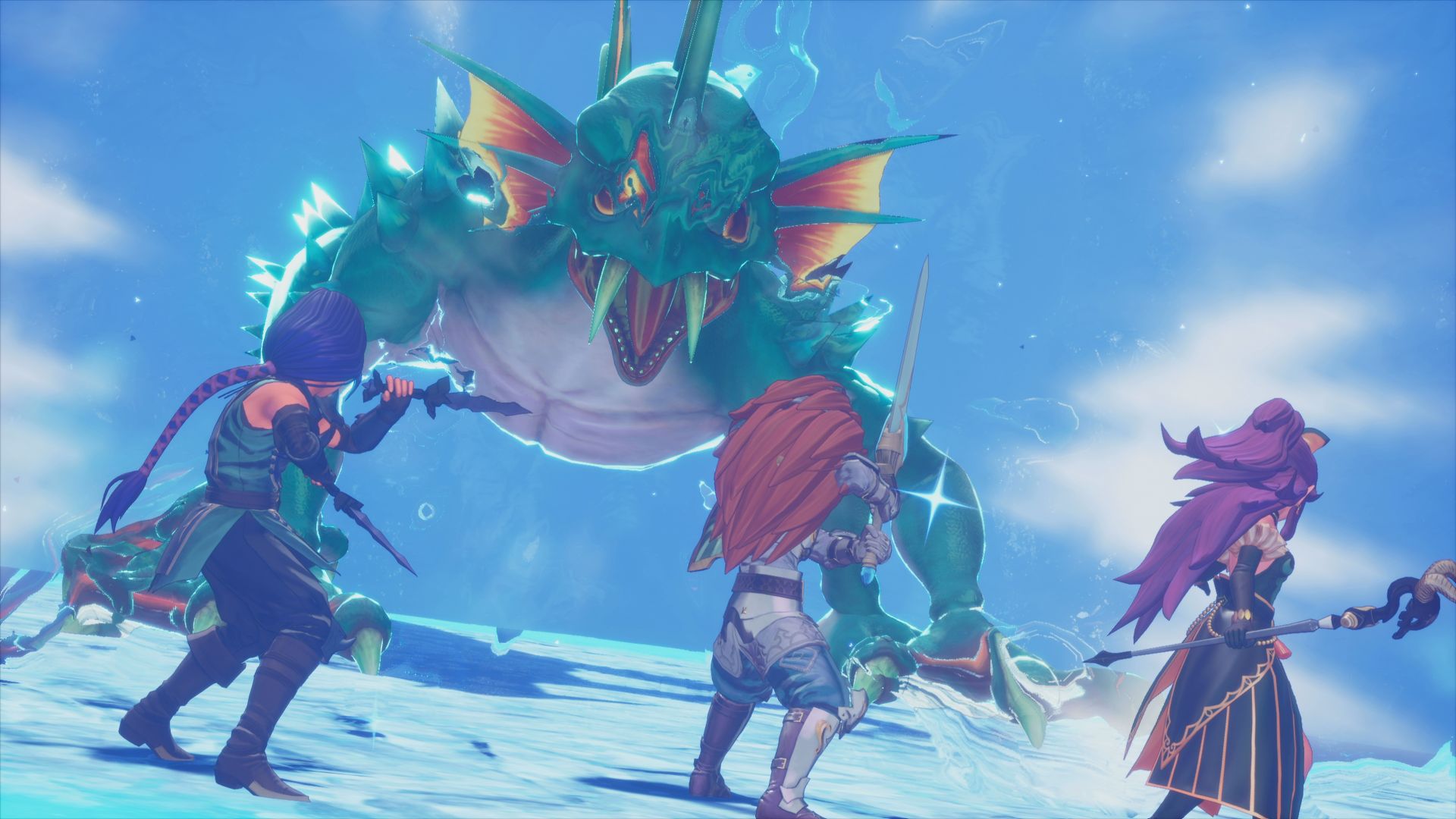 The boss battle announcements look cool. Too bad the actual fights are not.

There is one thing worth mentioning – the world map! Oh yeah, we have it. And it sucks! There is nothing to explore with your sea or air transport other than interacting with predefined landing sports.

Oh, I also like the idea how they shift to 2D view in some dungeons. Jumping sucks, so this easily turns out to be no fun instead of being something cool. But it’s too short and rare to even consider.

I felt the biggest pain to be the loading screens. You will maybe not notice this on your first run, as you will explore and watch what they have to say; but man, every other run I swear I was looking more at loading bar than I was playing the game. Try changing the class in under 10 minutes. Pweaty pwease? Hell no.

Weapons are cool, they change visually and if you read my reviews, you know by now that I really love and need this in my RPG’s. But. Small but. Some characters have ugly and unimaginative weapons, like Duran, while others like Hawkeye carry cool daggers. Buy and sell, equip and replace, that is what you will do to get stronger. 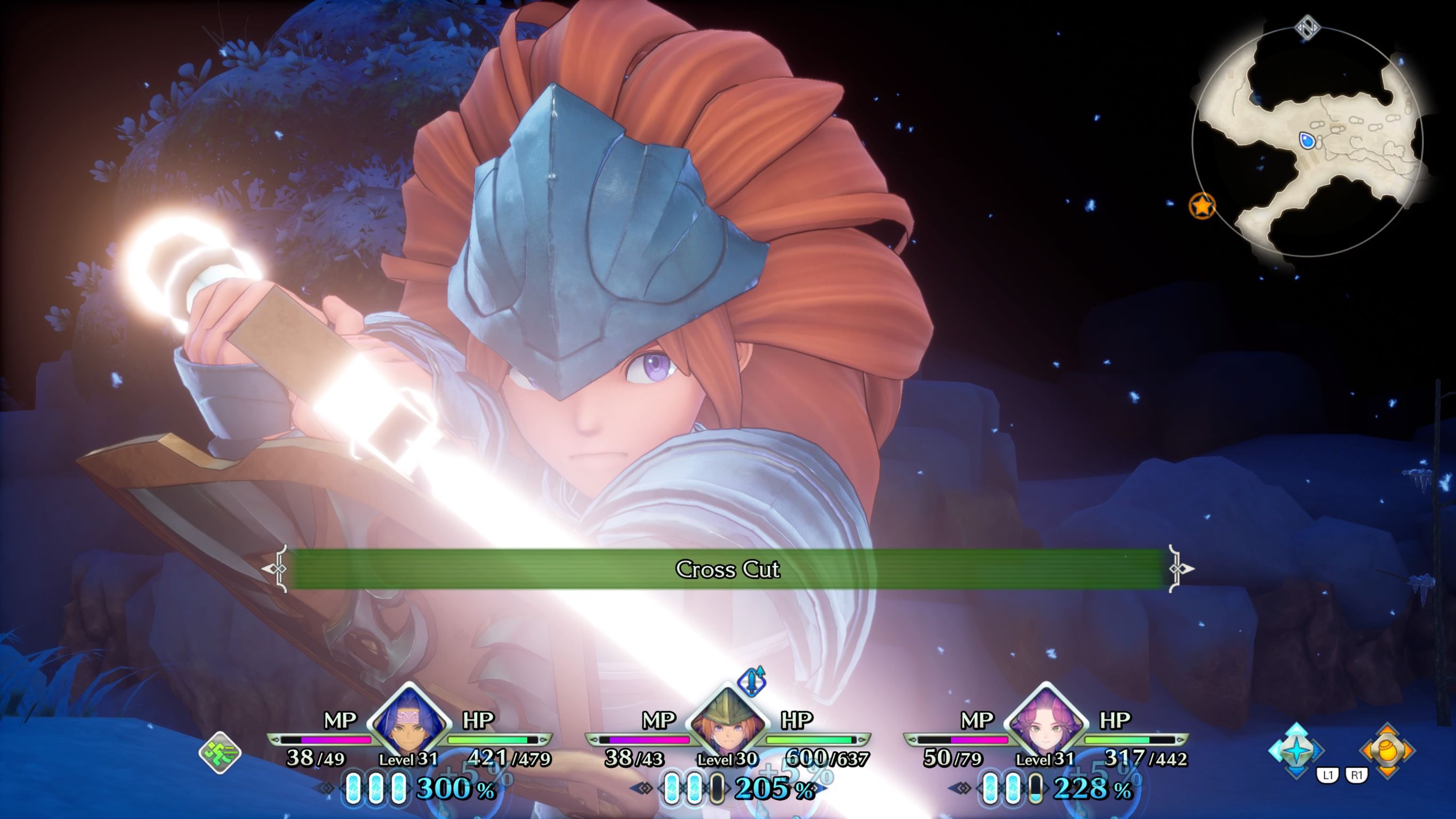 Special moves need those blue crystal points. No, you cannot skip the animations and yes, stronger ones have long animations.

Expect that the second part of the game will shine more brighter than the first one. The whole progress and leveling up kind of starts faster in this timeline, as the fun respectively.

When it comes to replayability and different story paths, well, there is plenty. 6 characters, they all have different starting points and parts of the story, plus the ending and the post-game dungeon. Content is present, but content is dull. I finished the game 3 times and I caught myself skipping all scenes. They are just boring. Only part worth playing were those different boss fights, which if you remember, are not even that special (because they are simple and easy).

New game plus is one good benefit of playing the game plus the post-game content. You can transfer almost everything. Isn’t that usually great? Imagine playing the game where you can 1-hit everything. 10 hours of hitting one button while experiencing dull story? No, thank you. You can finish the game in 20 hours, up to 28 if you really depend on yourself and not look at any guides. Decent, with additional hours for other runs, which you will most certainly not even think about. There is no challenge or even a reason for new playthrough. 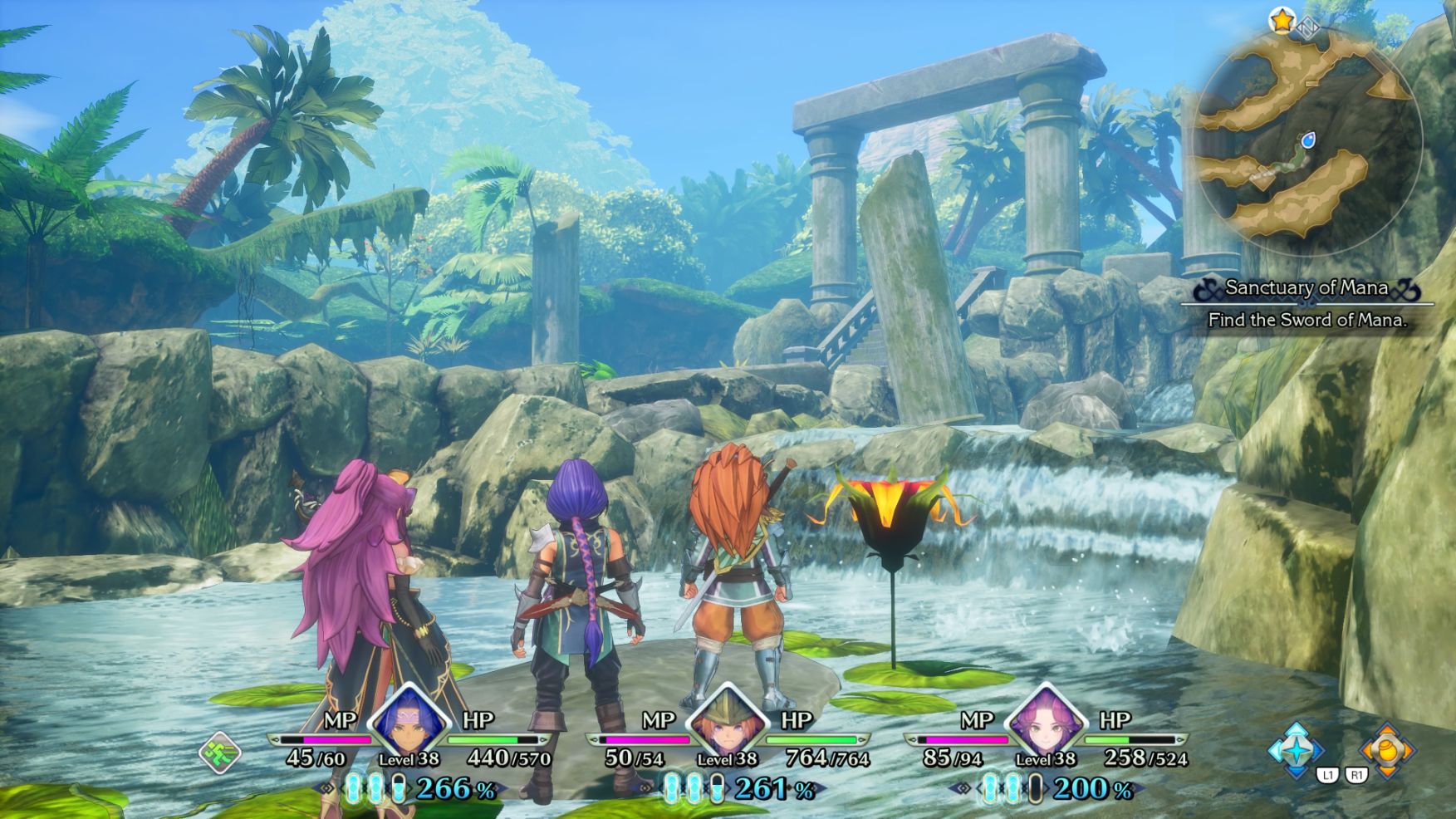 With only few locations this pretty, new playthough’s will be nothing but pain in your pweaty ass.

If you look for a simple, cute game, that will not get on your nerves, you like action RPGs – this can be your game. First run is fun and if it was only that, I would give this game the higher grade. Expect mediocre experience with high nostalgia trip – this can be a good thing for those who already loves the original game, and bad for those that doesn’t.

I fear this game will not shine bright. A plus is the fact that nothing important comes out this month, so people might actually give this one a chance. Others probably have their backlog full of games and honestly there are many games that are better to play. Square Enix continues to release mediocre games.

"Trials of how simple can also become fun."