Review | NEO: The World Ends with You

"Another action JRPG with cool music, weird story and good characters. Explore Shibuya while dancing in the rhythm, and mashing your pin buttons like you are crazy, while rewinding time and changing your future. " 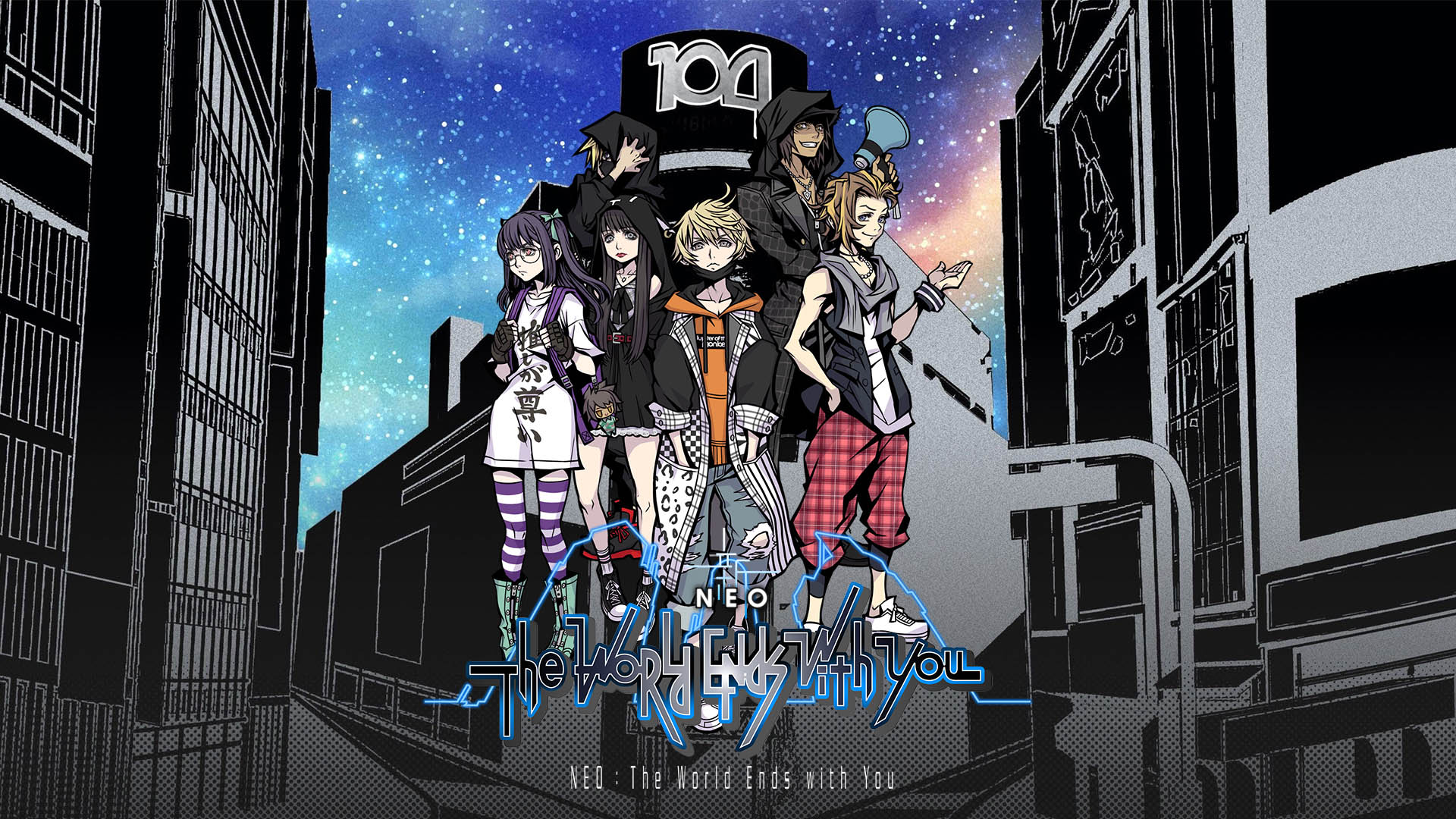 Out of 10 people that asked me what I was playing, exactly 1 knew what NEO is. Interesting. And that 1 person hated it, played the demo and told me “But it’s just a bunch of text”. Alrighty then.

I think this franchise deserves better marketing campaign. I can barely remember if I saw any ads or trailers for NEO, and I’m sad about it. Such a great game from 14 years ago deserved to be out in the public and deserves to be played. “The world ends with you” – such a weird name, yet there is something magical about it. I consider the first one on the NDS to be a masterpiece on its own, and kudos to Nomura and the team (the same team with a bit different head positions) for getting that and the new one in the series done. Let’s start with NEO, the star of the evening. 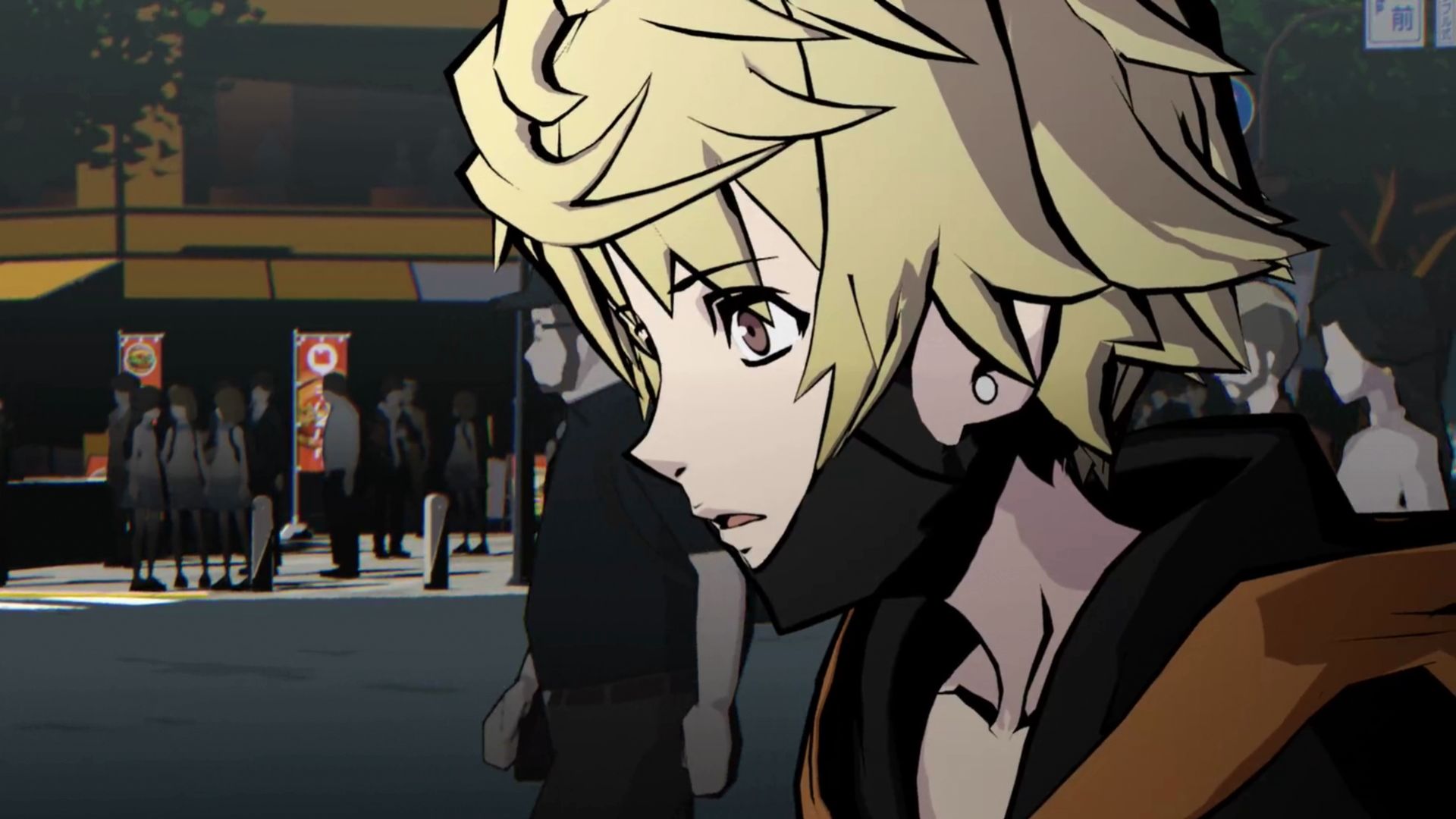 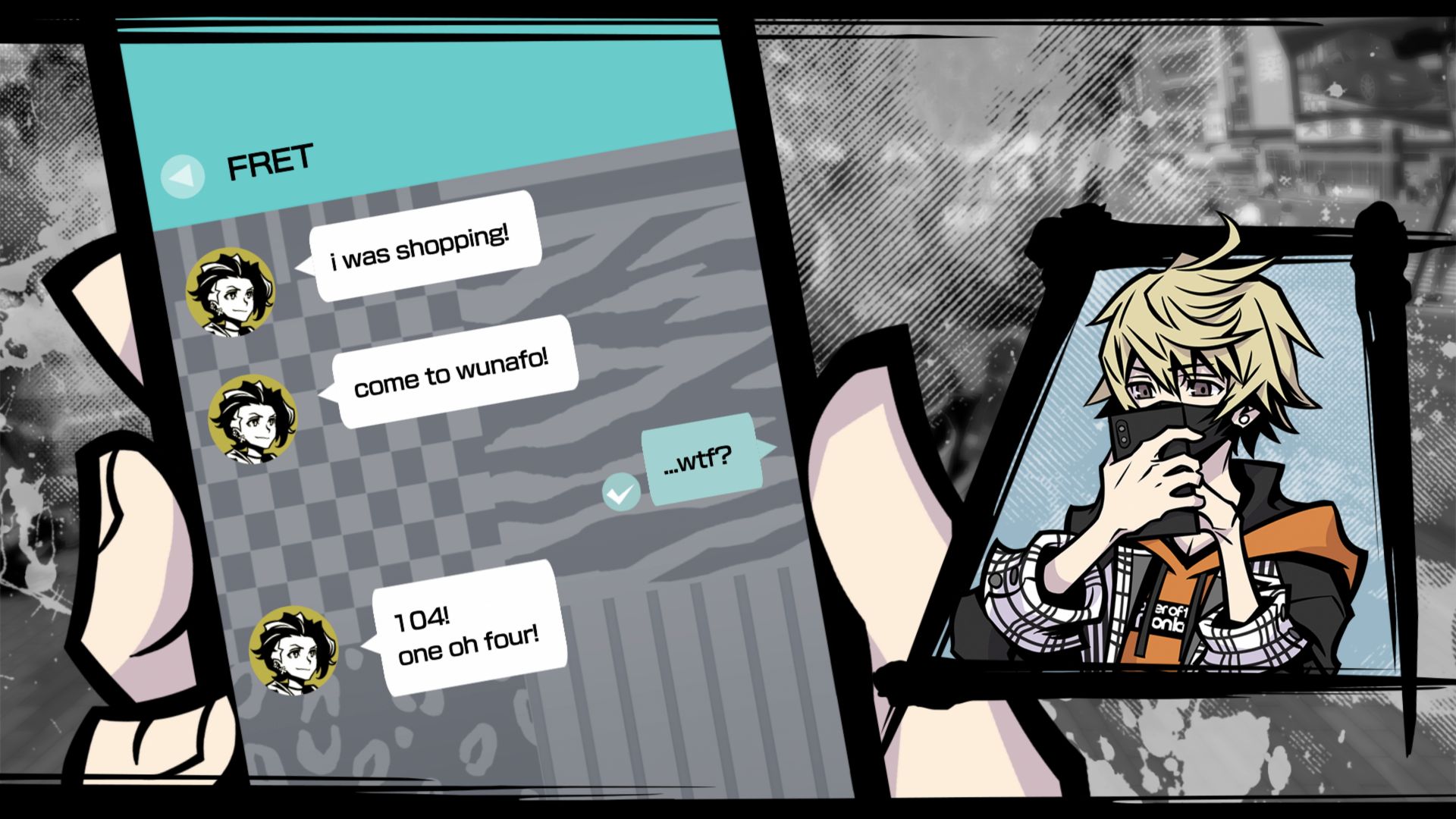 When your friend asks you to go shopping, well, you say WTF. Listen and read at the beginning, important events starts here.

14 long years, eh? I can’t comprehend these past dates anymore, I guess I’m getting old. When I think about the past and the first title in the series, I can only say: Great music, cool graphics, awesome weird story, cool characters, innovative touch screen gameplay… Can I say the same now for NEO? I can’t, but I can make some strong counter-facts and I will!

First of all, NEO: The World Ends With You is a pure sequel to the original game; the story about Reapers and players in alternate reality is upon us once more. Win the Game to survive! What is different is that we now have full 3D graphics instead of the 2D-ish that NDS featured with. Another big change is the combat system; how the hell can they make it fun and awesome again? I don’t think they can, and I think they did, but I also have some butts for you on this terrain. JRPG (action JRPG) got another contender, and I can honestly say I’m both satisfied and disappointed at the same time – funny enough, it applies to the battle system at the same time, plus some pacing issues.

You can get the game for NSwitch and PS4. I played it on my PS5, but unfortunately you will not feel the difference on PS5 (maybe in the future?). 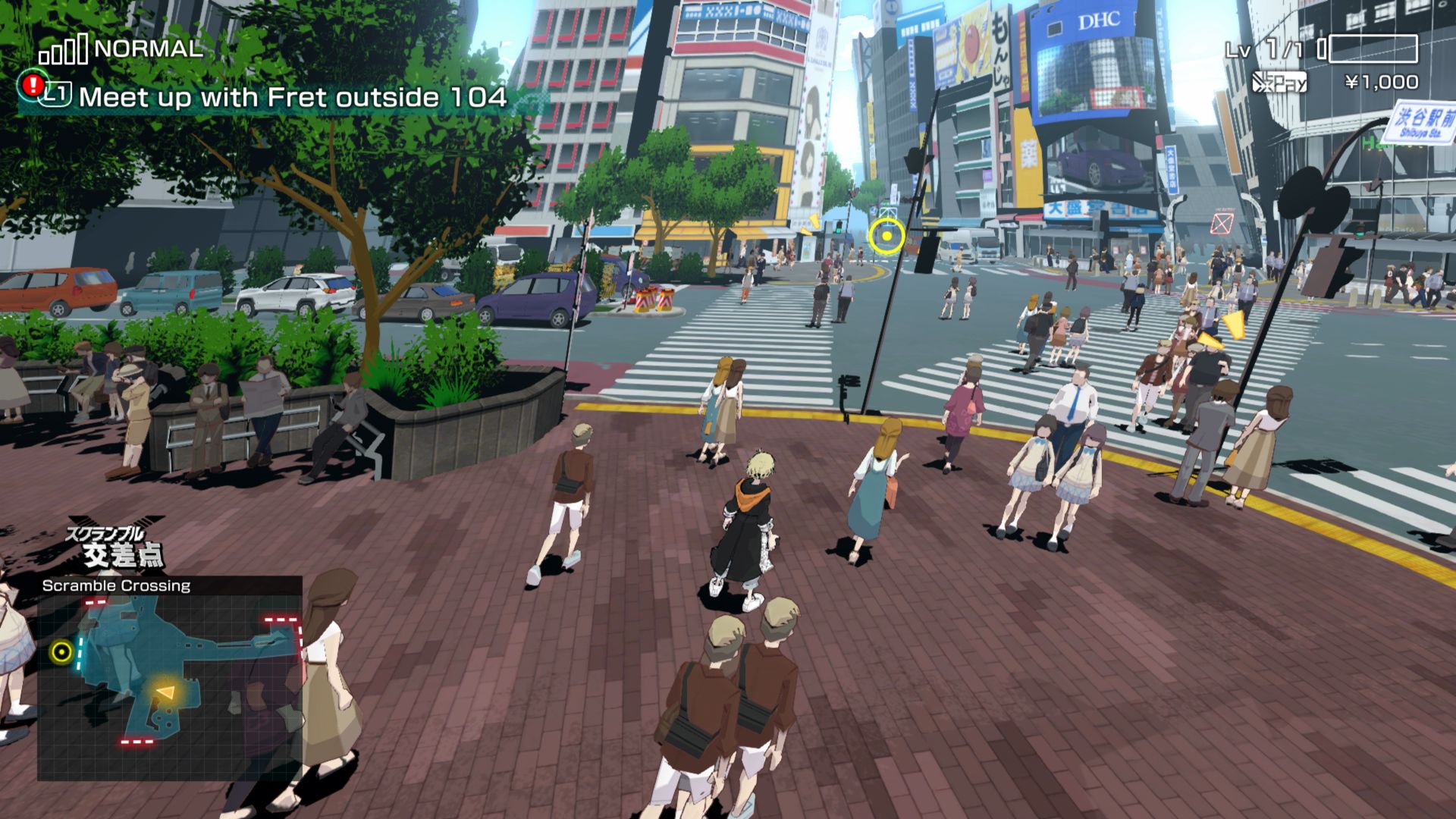 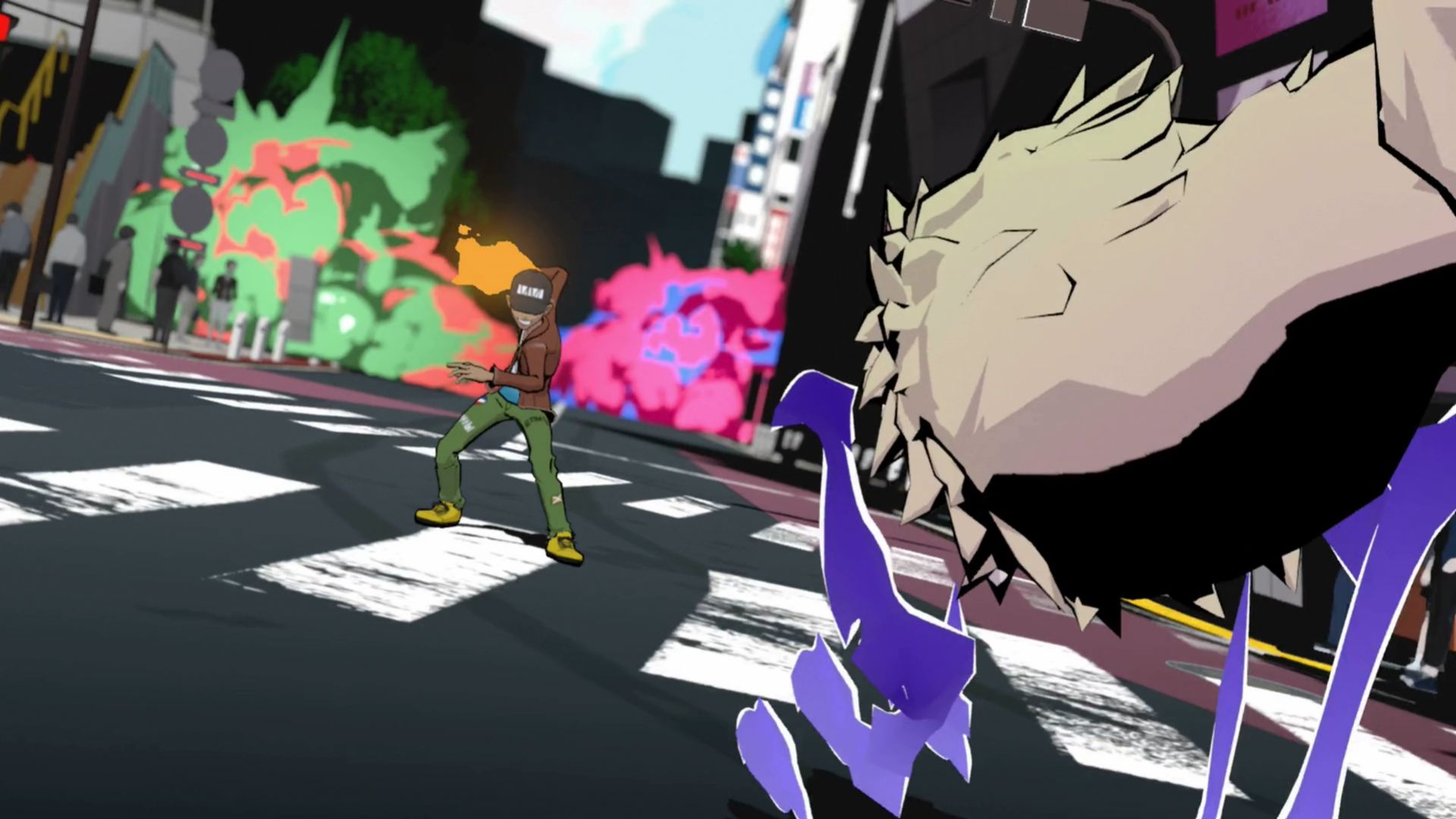 A lot of stuff will happen througout the town, too bad you are here the whole time. I know Shibuya better than my own aparment.

The story holds the quality I experienced in the first game. The problem is a bit with the pacing and how they “constructed” the flow. You will live through the 3 weeks of alternate Shibuya (the only in-game location, town you will traverse through) where you will have to play the “Game” that Reapers lead, all to survive and get back to the real world. That is the biggest problem here, 1 town and so many repetitive locations. It’s not bad, but I spend 40 hours on the story, and I was really fed up with the town, I wanted it to end sooner. The absence of quick travel made it worse, even though you can dance in the rhythm and move fast, but going through the same areas repeatedly killed the pacing.

It’s written very well, the cast is great, loved it. Audio English dub is awesome, no one irritated me, and I loved every single character. Like mentioned, because of the pacing issues the story can get a bit “when will this end”. Overall, I liked this part better in the first game, but I also loved it here in a way, I connected with the crew, and I was curious what will happen. They even brought some known characters from the overall TWEWY universe (and the first game!), but I don’t want to spoil it. I can only say that confused me a bit, every time the game consists of timelines and dimensions, I get confused, a lot. Maybe Nomura “chipped in” a bit. The one thing was a bit off, but I don't want to go there and spoil the fun, but brinhing certain someone just raised some questions and never gave good answers to begin with. Mixing new and old was a bit confusing, but I don't mind much.

Most of the story is divided into long comic book style conversations, halfway dubbed. They sometimes talk too much, but they never leave you hanging, every skit has its own beginning and the end. Too bad there aren’t more animated scenes, the ones that the game offers where cool. I really miss that in games. Give us the “awes”, not the “sighs”. 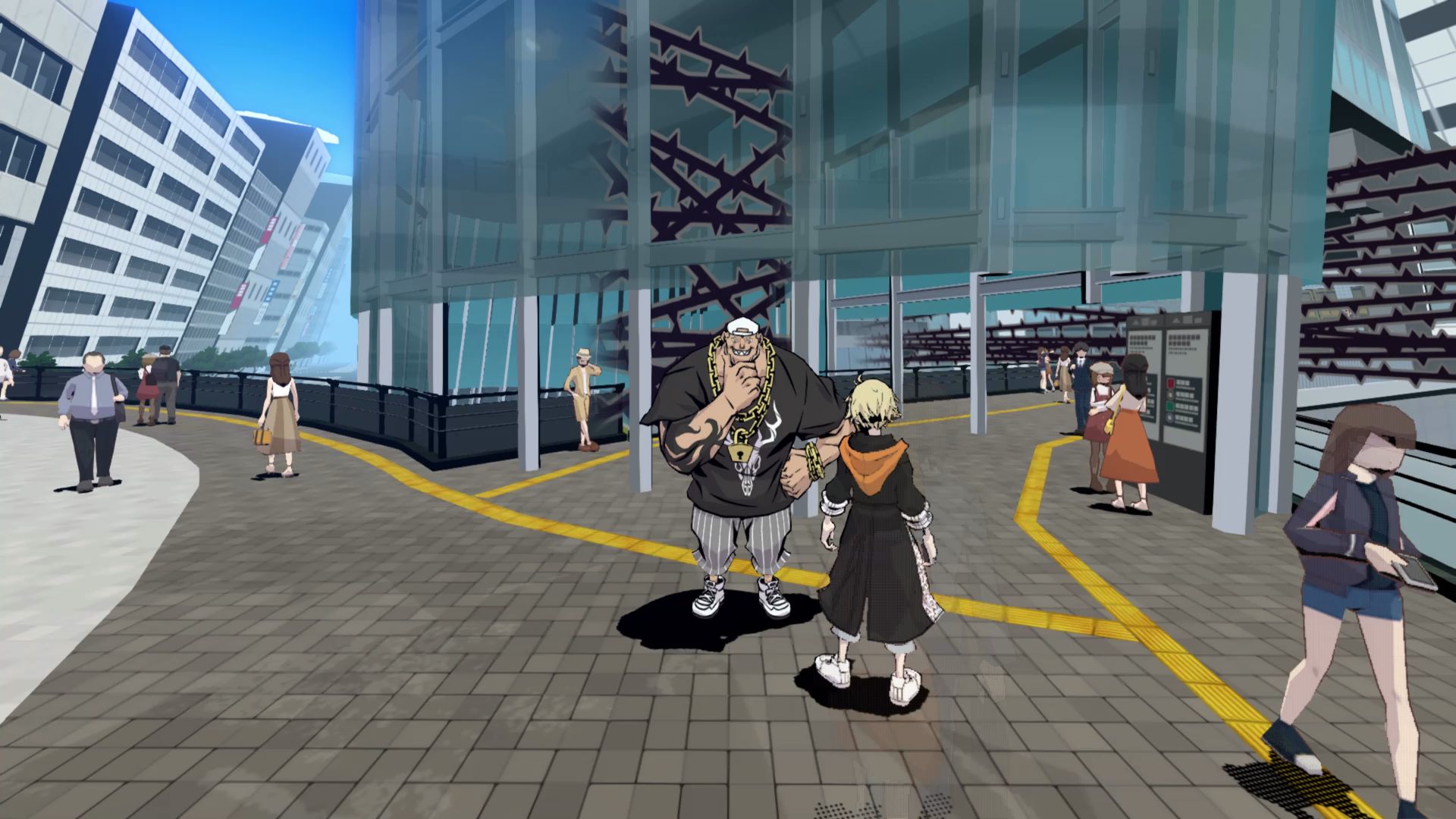 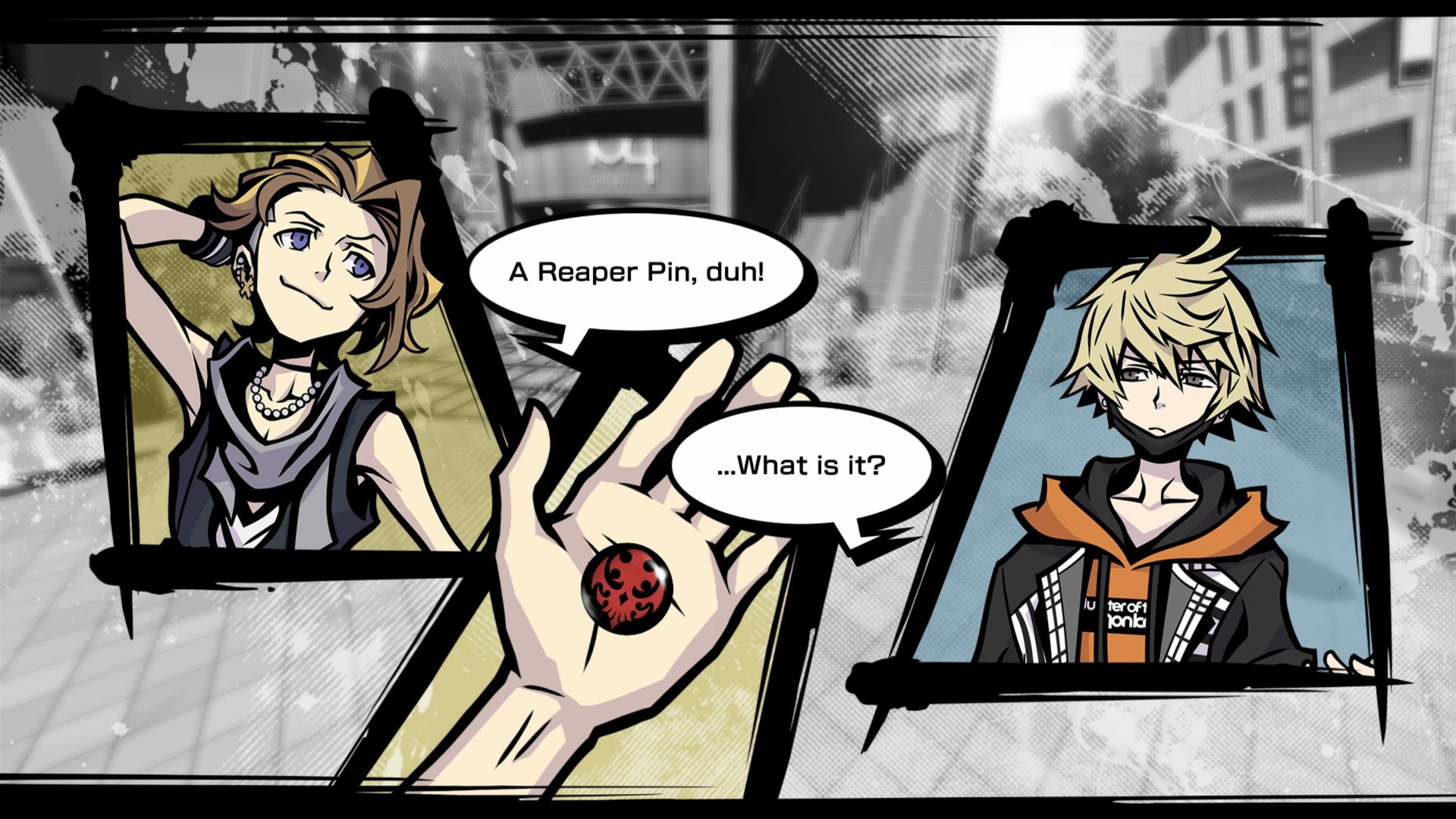 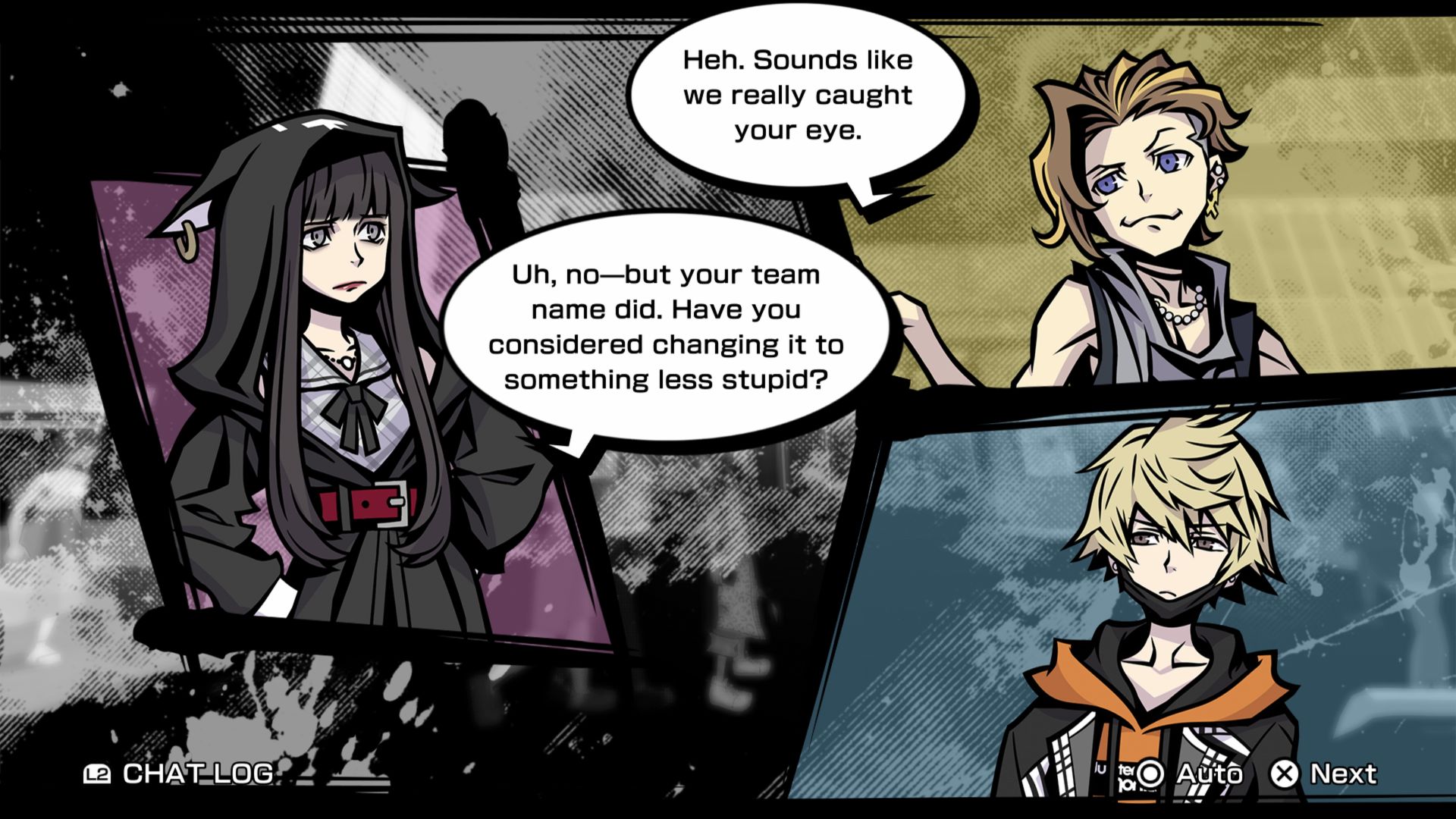 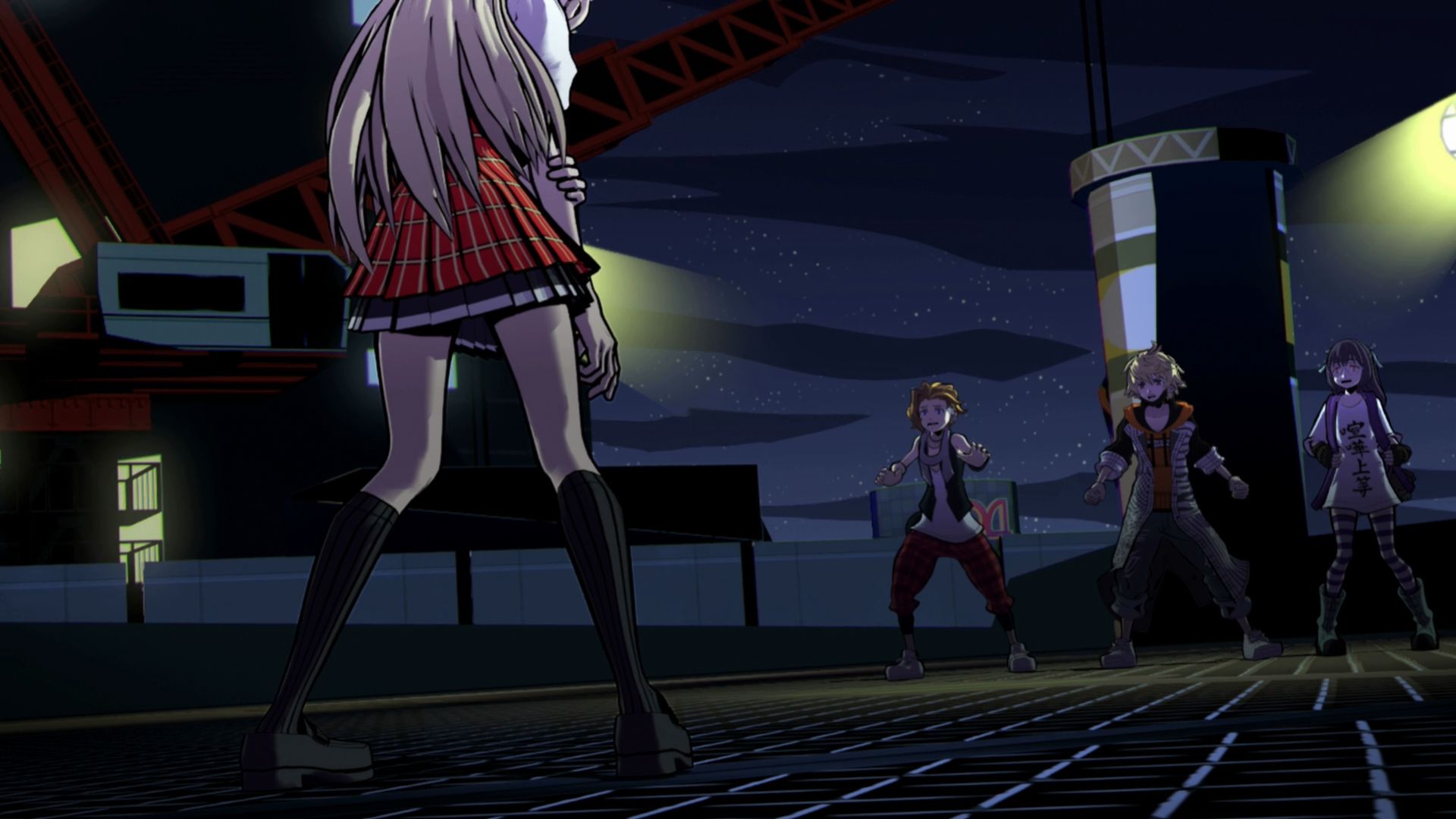 I loved the skits and design of the characters. It points strongly towards the first game, and the "feel" and the "vibe" is most definately here as well. Add good music and it all just fits (with some downsides of course).

What is good is the variety of daily tasks and puzzles you will have to solve to pass the day. Some made me think hard, some were easy. This is what is good, and the idea of turning back the time in a day to change the future, which will be a major importance later is great, but poorly executed. It’s very predictive at times, and sometimes I was bored with the same “change back the time, talk, change back the time, talk, revisit the same areas…” tasks. They could’ve done this better. And it always comes after you run around like a crazy person, when you think the day is done, then they add this feature.

Side quests and side stuff is cool, but very straightforward. You can collect social skills and befriend NPC’s. Doing this will add more environment and battle skills, but nothing spectacular if you just aim to finish the story. Quests are simple, they consist of using the skills like Reimage (mess with the brains of people), Reimport (“add” words into people’s heads to point them in desired direction), Dive (eradicate the enemies inside possessed people) and so on. I loved the challenge, so I did them all. Getting gold medals in dive missions can be frustrating, but fun.

When you combine the side content and the main path, I can say it’s enough, but since you only have Shibuya as your place to be, I think it will get stale after some time. It did for me on the last week of the story, they should’ve just shortened it, or added more linear chapters outside of the town so we can see and experience different environments. They just depend too much on the same areas repeatedly. Even making some days shorter and more limited (for example early days will not let you visit all Shibuya areas, that expands in future days) could improve the bad stuff. 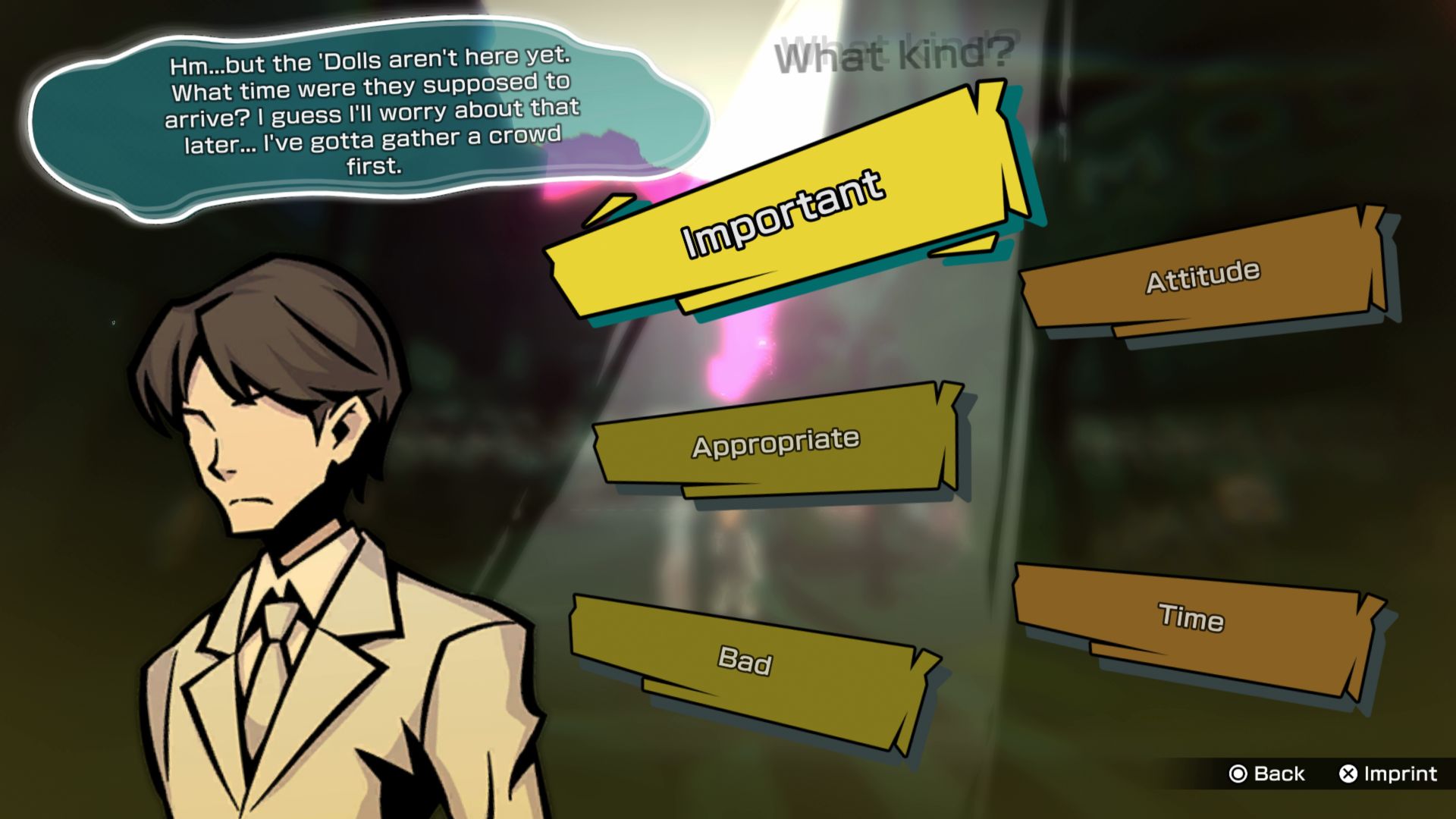 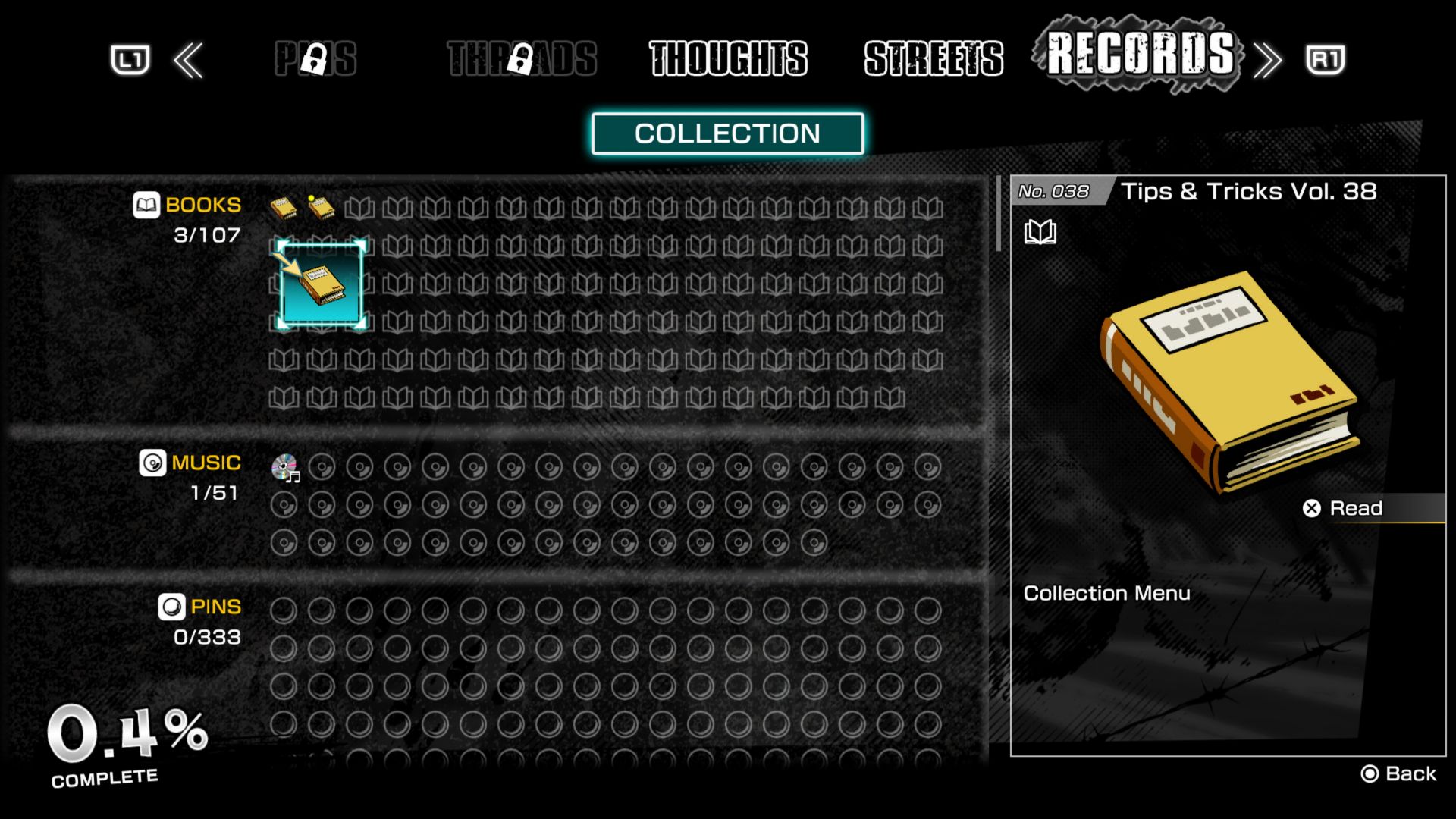 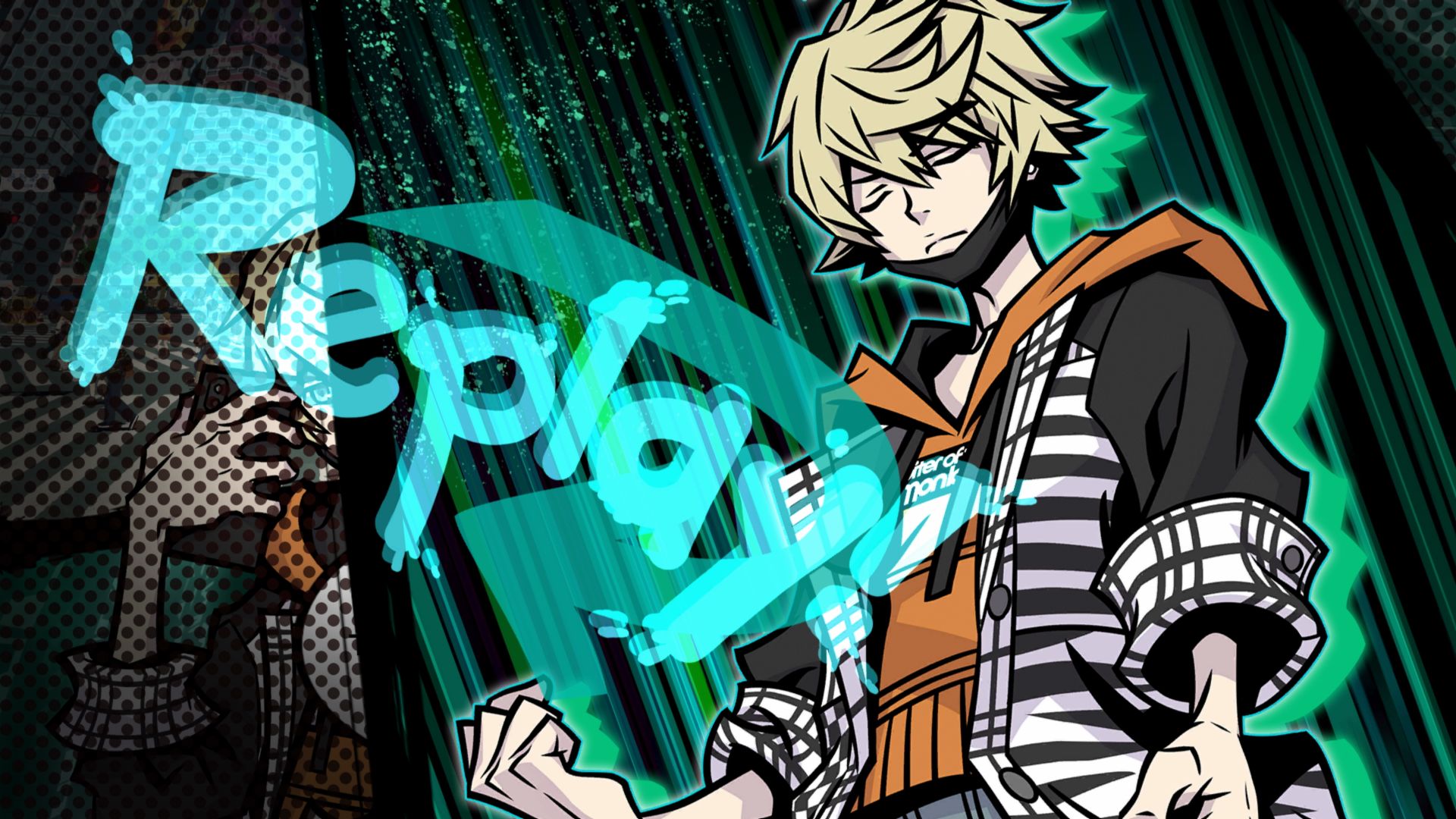 Try to collect everything. Changing time is only applicable for story missions and you can manoeuvre much outside those boundaries. Too bad you can impirt some nasty thoughts to NPC's.

The biggest perk is the battle system. It’s mindless fun, it’s a button masher, but having 333 different pins (pins are what you equip as your attack button) raised the bar of mashing. I also think the battles are bad in that matter, it comes down to mashing most of the time, right until you raise the difficulty level or experience some harder challenges. Too bad, secret boss in the game is tough, he is the only boss alongside with maybe 2 more where you must use your skill, dodge, and time your attacks. The rest is just “press everything, hope for the best”.

Let’s simplify this a bit. You will have 6 characters in a fight. That means L1, R1, L2, R2, triangle, square pins. Let’s say you equip a shotgun type of pin on L1 button. You will mash or hold the other buttons while holding L1, and when you stagger an enemy, you release the L1 and insert some shells into their brains. This is so saucy, I loved it. But, like said, really missed potential considering most of the game is easy.

Changing and hunting for different pins was for me one of the best stuffs in the game. I love collecting and collecting here means you can experience different moves and strategies. Even finding pin sets gives some additional bonuses and different synergy attacks, which is cool.

You will love or hate the fight, I ended up loving it, especially in the post-game where I never got bored with collecting stuff this game has to offer. 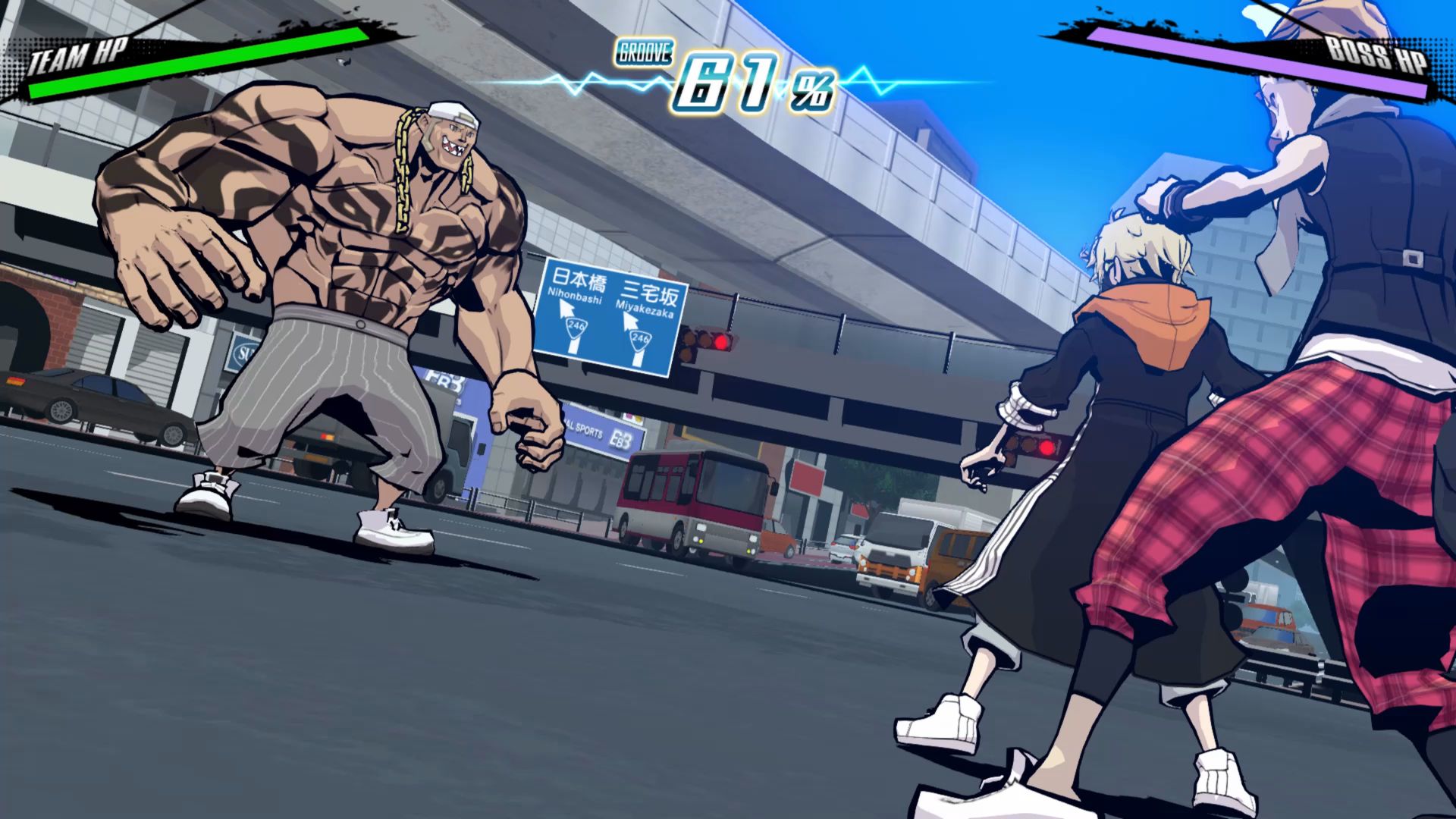 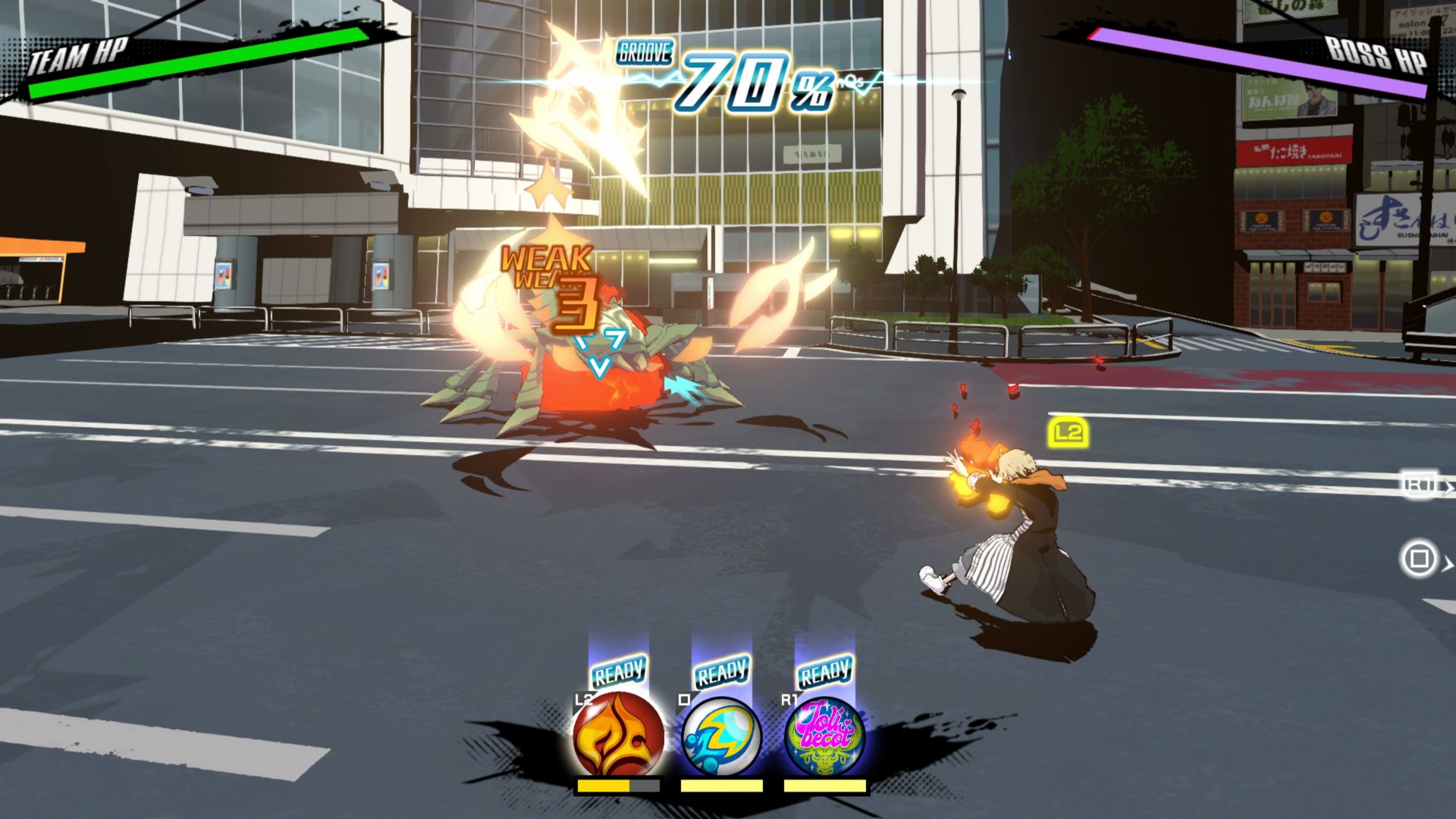 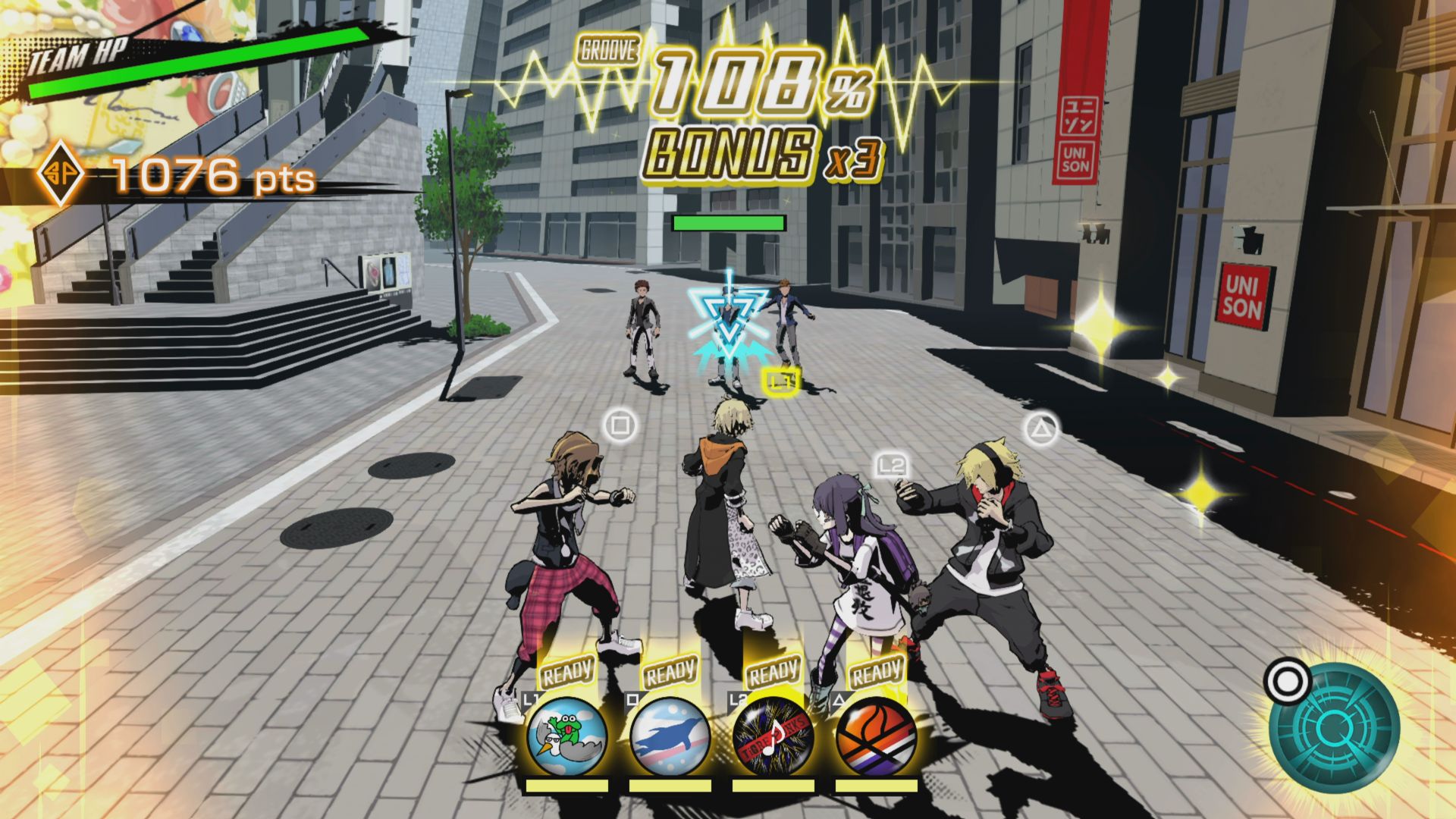 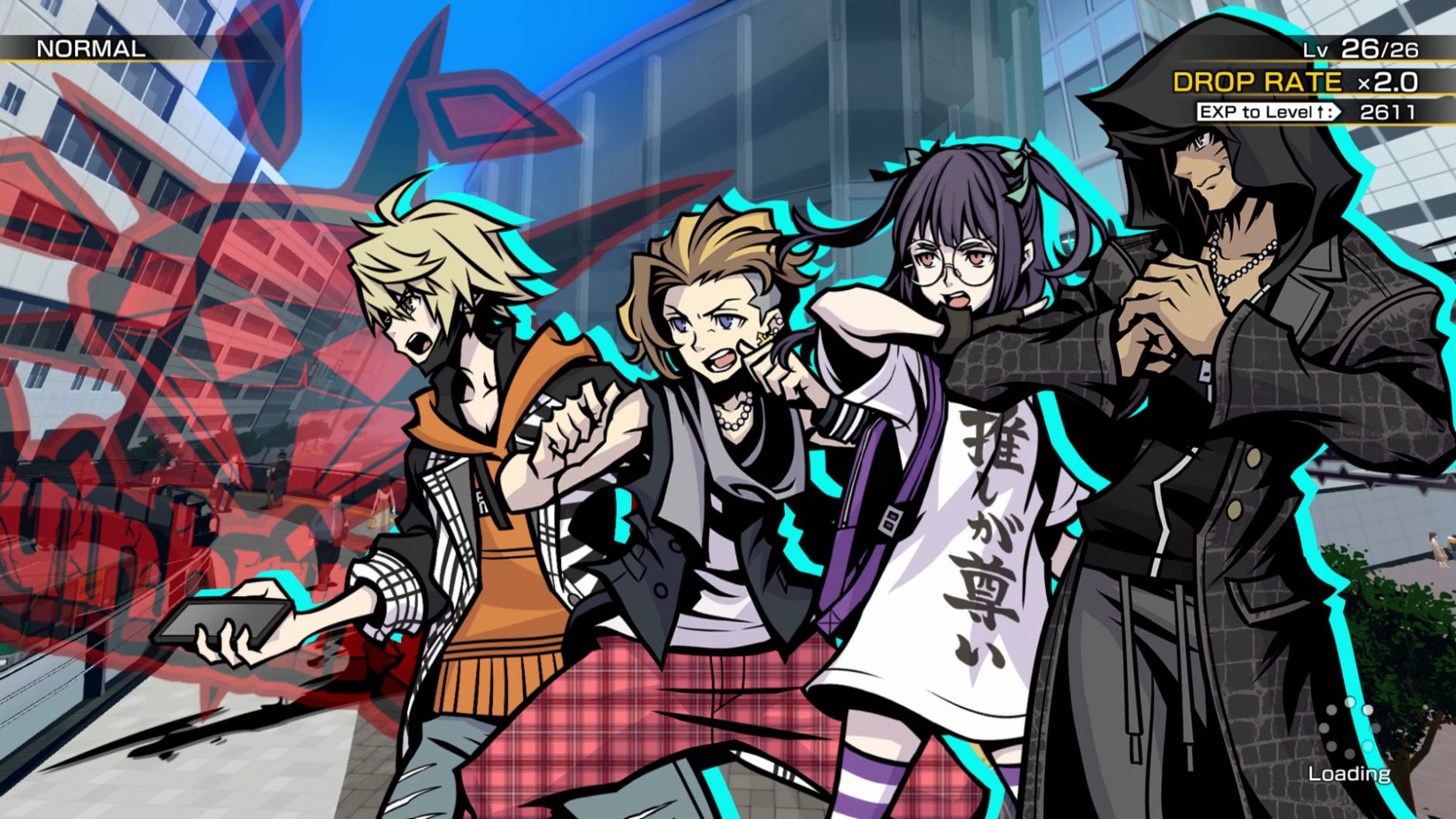 If only they added more enemies, more tactics, more everything. It's a real button-masher, with plus being the pins which you use to change your attacks and tactics. Boss fights are ok-ish, but I wanted more.

Another side stuff you can do is buying Threads (consider them armors) in the shops. They are of course, hats, t-shirts, bags… And you must have style to use their abilities! You raise the Style points by consuming food in restaurants. Who would’ve guessed it? And the cool thing is, eating can raise your HP, Atk, Def and Style permanently! Eating fills the fulness bar, so you will have to fight to lower it down, otherwise no food for you!

Aim to eat whenever you can, it will be helpful. Then you can equip different threads and set your desired abilities like HP regen, better drop %, increased defense etc. The whole system of how you can prepare is good, I loved combining different sets to get different perks and then combining pins to create an ultimate set.

You can also solve the challenges of regular Reapers to unlock shortcuts during missions, which require mostly passing certain battle tasks. Oh yeah, and you can chain more Noises (they are the enemies that appear in areas) to raise the difficulty and the drop rates. When you unlock 4 difficulties, you will want to do that to get better pins for your characters.

Each day comes with special Pig Noises, so you can also search for those if you like exploring. 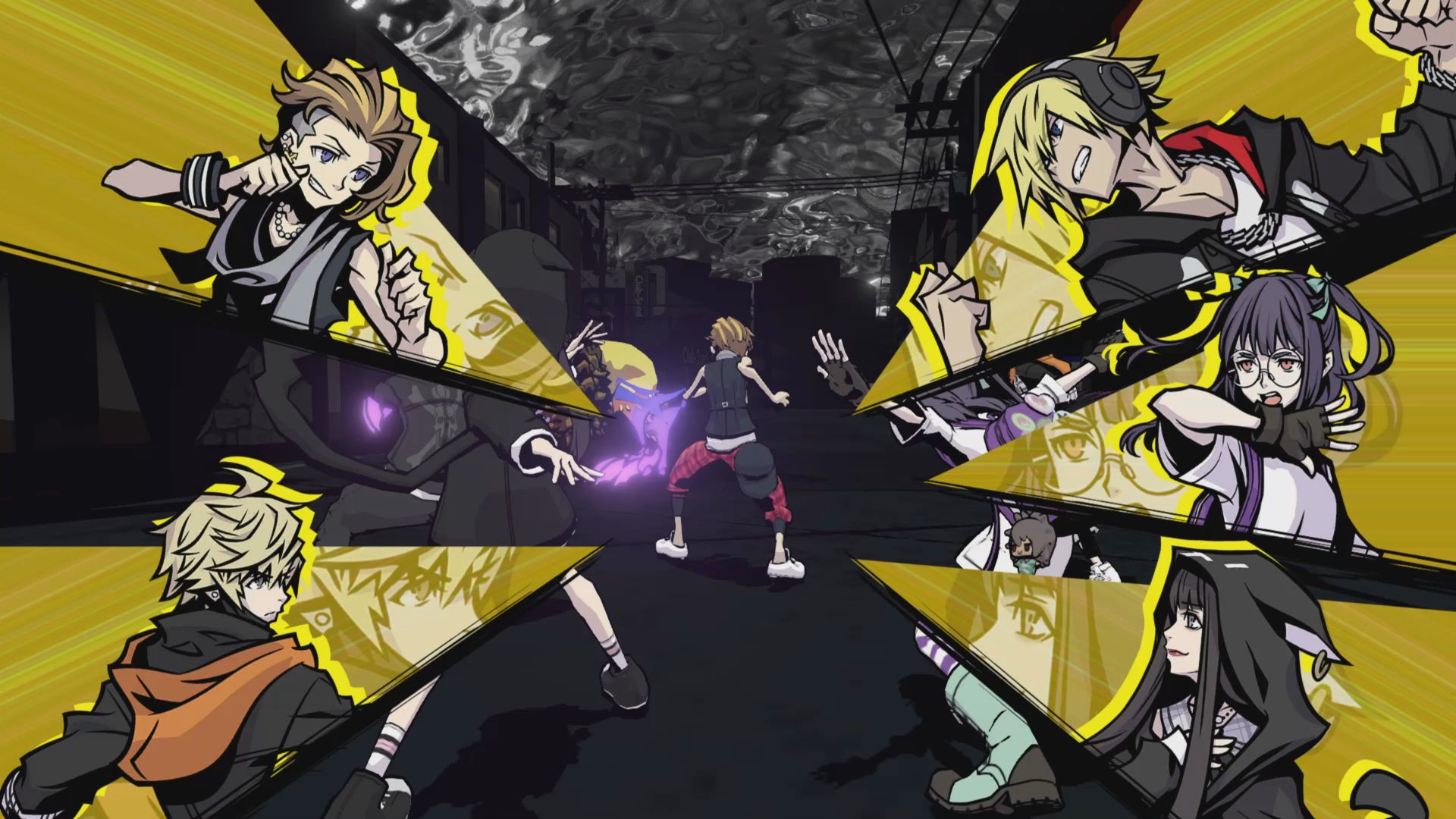 Dress well, prepare for some nasty challenge by combining thread abilities. Noises are your enemies. Uncover the whole truth about them, and while you're at it; chain them and eradicate.

At the end of the day (your, not the ones in the game), you will remember the soundtrack (Nu-metal, hard rock, you name it), characters, story, maybe the battles… The game suffers from certain downsides, but overall, I think it’s worthy of its successor. I can’t remember the last time when I was excited about collecting everything there is.

I hated the enemy variety, too much of the same types, maybe also a lack of more boss fights. But I ended up loving the battles because of the move variety and constant change in that aspect. You can also replay any chapter and collect what you miss, which is cool. I think I have 80 hours now, and I’m still not done (and not bored still!).

If you loved the first game, you would probably love this one too. Another action RPG which is not the best, but certainly hits some sweet spots. I’m not disappointed, 14 years of wait were worth it. Don’t buy if you hate the walls of text, this game is heavy on the dialogue. Then again, most of the JRPG’s are.

"Decent title with pacing issues, repetitiveness and often a button masher - but variety of attacks saves the day. Great soundtrack and vibe."