"What do you get when you crossbreed Astral Chain and Control (Alan Wake if you will)? Simple, you get Scarlet Nexus – new anime treat with psychokinesis approach and weird ass story. Will you like it? If you liked above 2 titles, for sure." 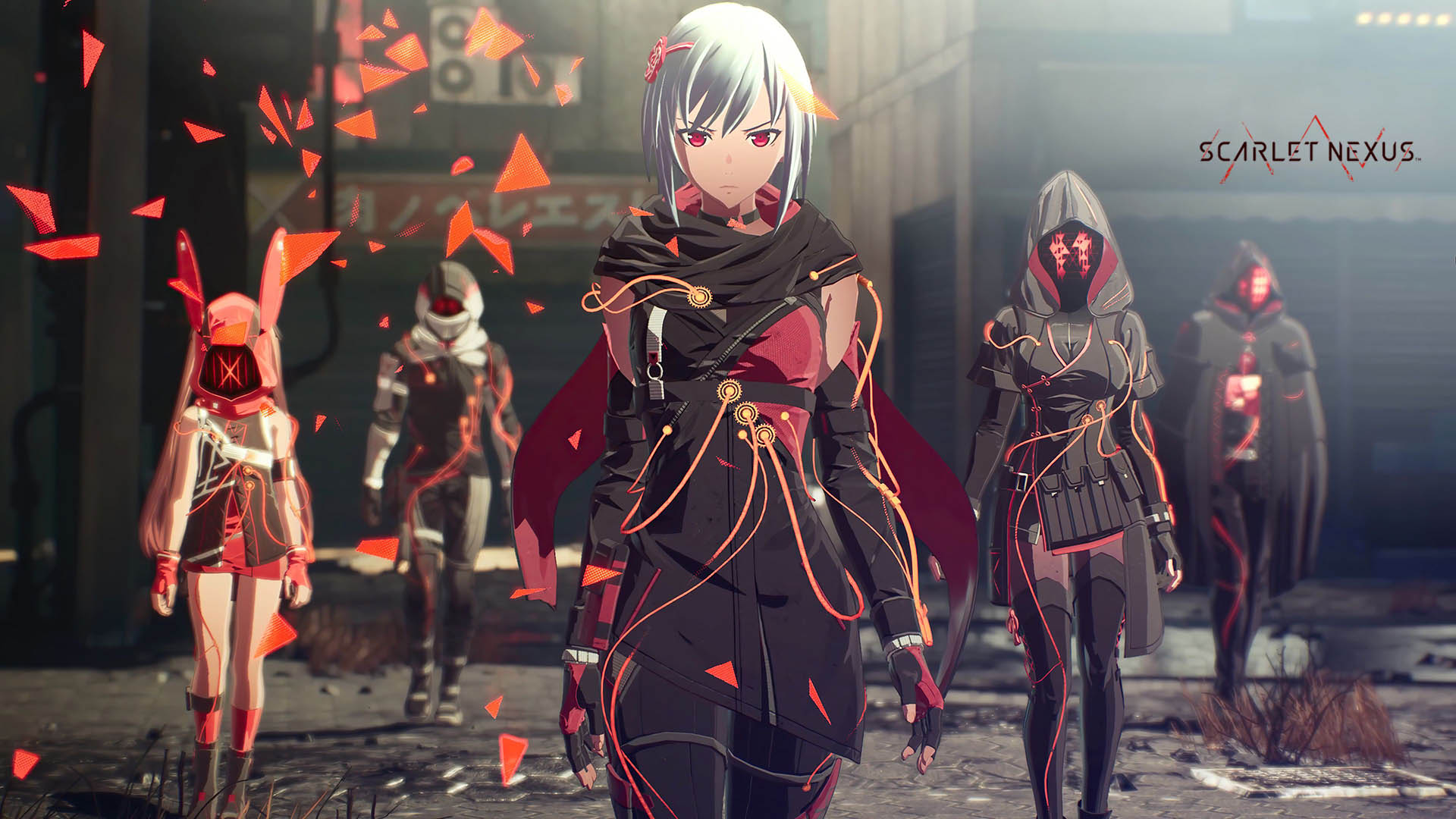 Scarlet Nexus is fresh a product from Bandai Namco Studios, it is an action RPG from a third-person perspective. Don't we already have enough of those? Well, yes and no. Although I prefer turn based JRPG's, I don't mind when they come out like this one. You can get it on the PlayStation, Xbox and PC; I played on the PS5 and this version is inferior when it comes to loading times + heptic feedback.

The idea about this game is complicated to explain. You play as Kasane or Yuito – OSF (Other Suppression Force) soldiers in charge to eradicate Others – they are something like aliens who wants to consume humans in a world you live in. You, of course, will save them, alongside of other companions that comes with other supernatural powers and perfectly combines with psychokinesis that Yuito and Kasane excels in.

This means you can start your journey as one character or the other. Around 20h of journey awaits you, up to 25-40h if you plan to do 100% in one side of the story. As you can continue your progress in the second run, for sure that one will be faster, although many parts are still the same, but from different perspective. It is cool though, my first was Kasane, and playing with Yuito, knowing about events and his past; made my second run kind of interesting. Still, I was expecting more variety, but that comes in a form of branching paths and some different chapter locations, but not much overall (bonding episodes and your team are different though). 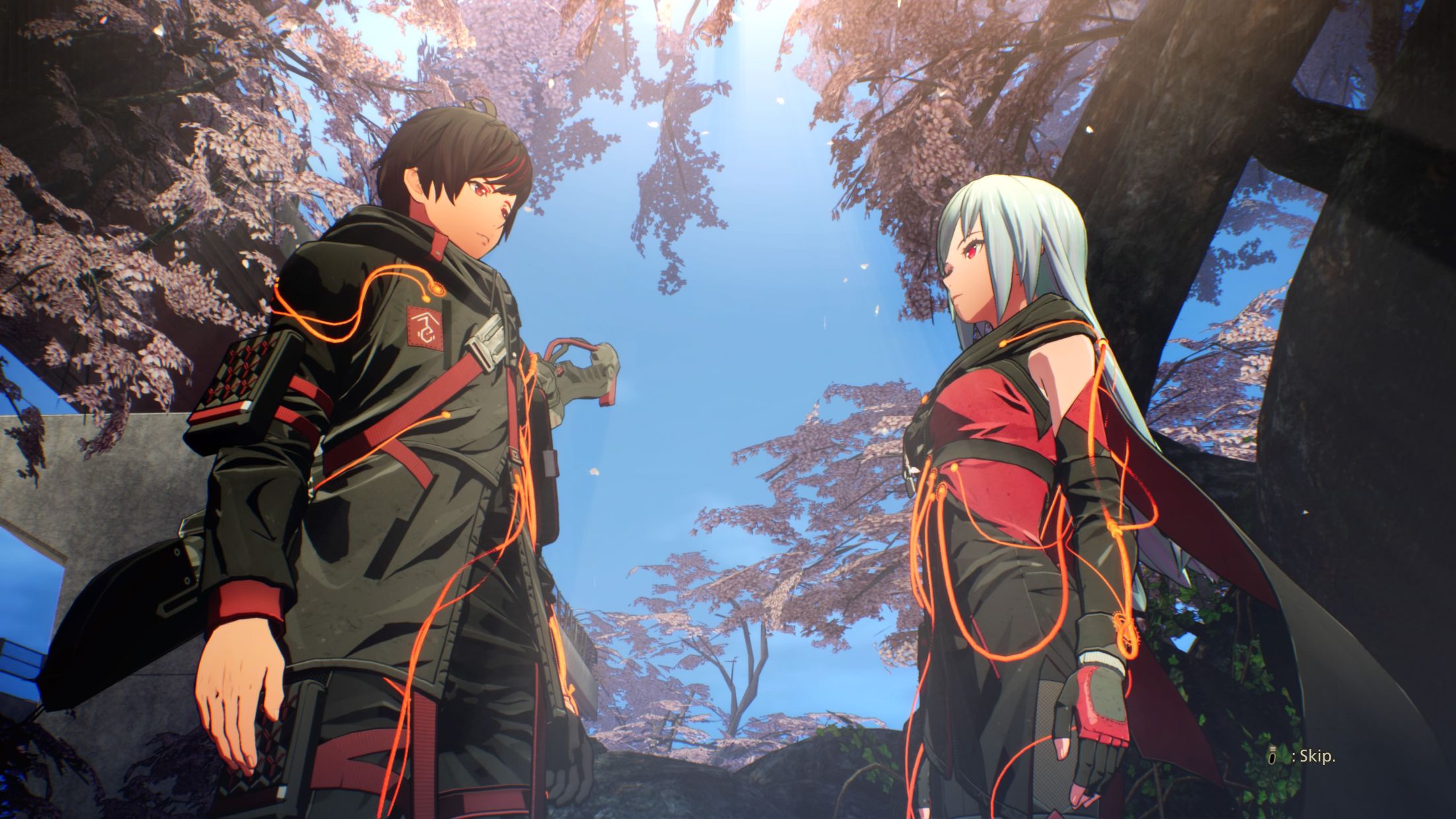 Kasane, Yuito and the crew. All events are tightly connected with them, plus, look at that pretty anime graphics!

Like every game, starting point is slow and confusing, you will meet your allies, group with them, go onto missions… Occasionally you will meet the other group (Kasane being part of one, Yuito the other) and learn about this world, another world, another timeline… It gets complicated quite soon, and that is what bothered me, but at the same time made the game interesting.

I loved the characters, but they do lack some depth. Learning about their past and situations is something I always welcome if it peaks my interest. That happened here, but not entirely. Some bond events (that I will talk about later) and stories about them were a bit boring and slow paced, the story itself gave much more focus on complicated intertwined events and overall, I felt that something is missing when it comes to this social aspect of the game. Don’t get me wrong, I love almost every character there is, I just didn’t feel that Persona-like connection.

Expect weird and overly complicated story, cool characters, many cutscenes in a form of comic book (static with a lot of text but dubbed) and some animations here and there. I wish there were more animations, comic style way of telling the story sometimes gets slow paced and you lose focus. Also, I have no idea why the hell you can’t remove “Skip” button from the lower right corner of your screen during scenes, my entire screenshot library is with that button displayed! 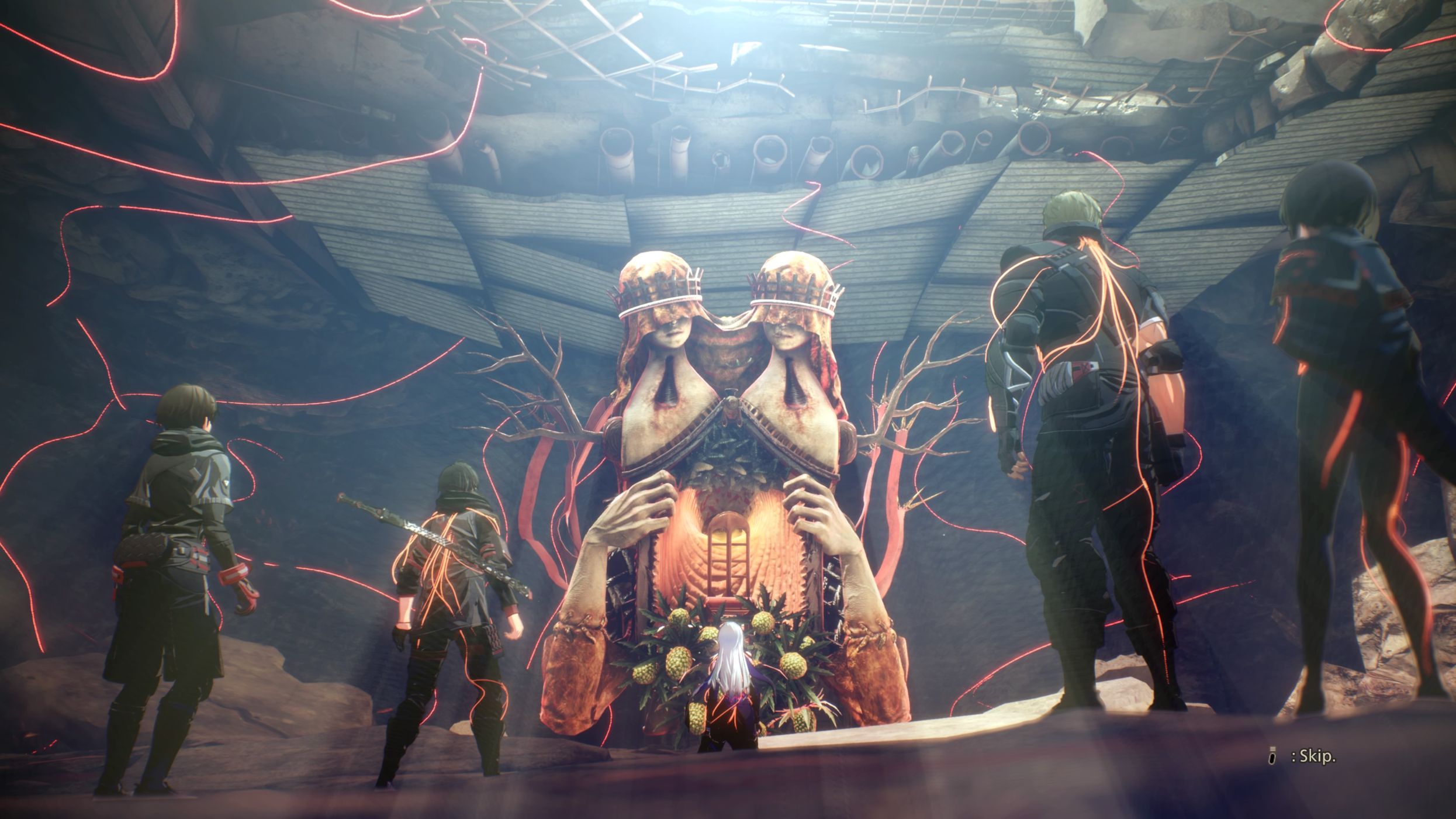 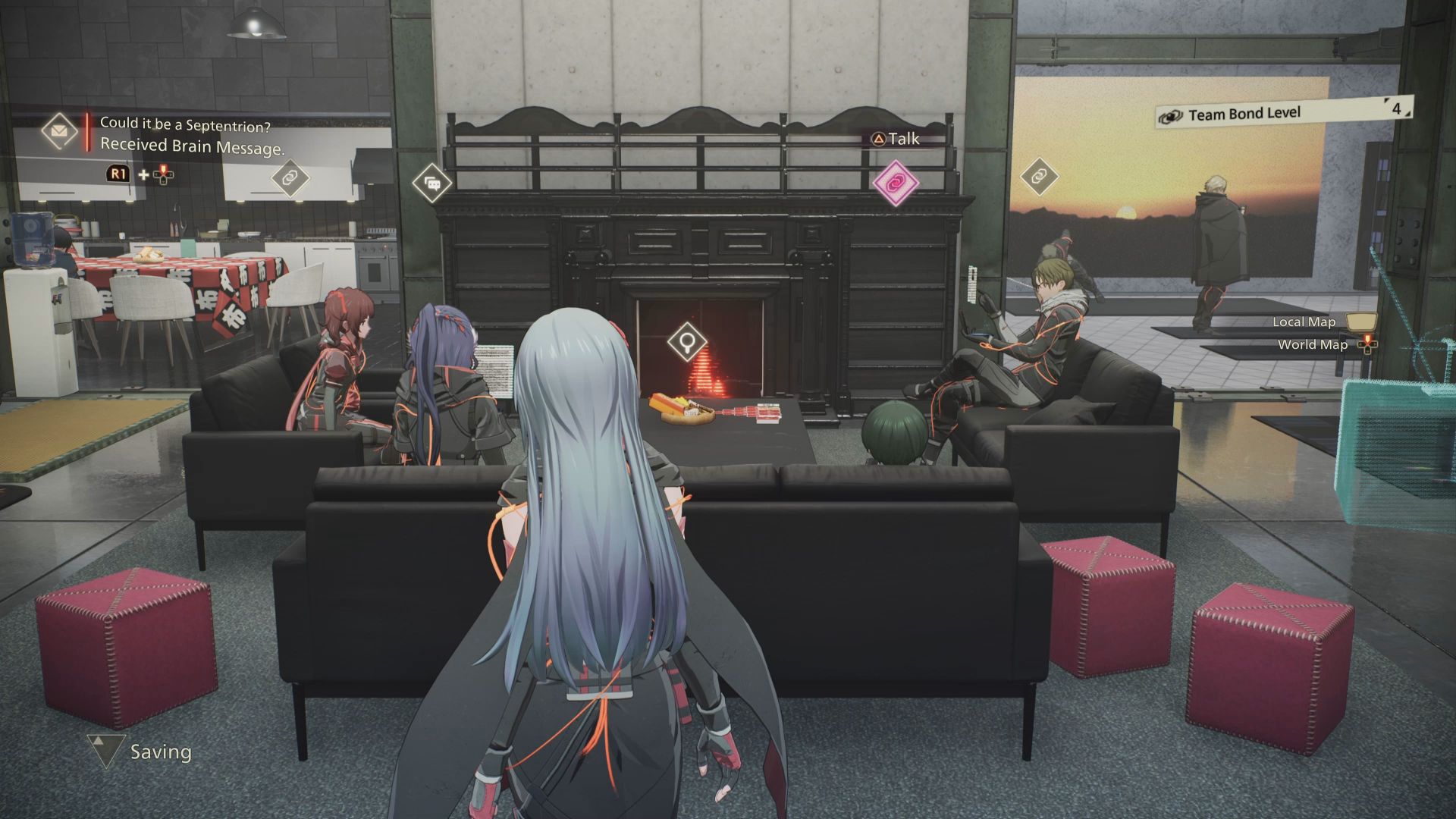 In one moment you are trying to talk with monsters, in the other - well, you are in your home base, chillin' with the crew.

If you played Astral Chain, you will find many similarities in this game. Conceptually it goes through chapters, end being your home base where you can talk with your team members, buy them gifts, and participate in Bond Episodes. Bond episodes levels your bond level with your allies, unlocking some new combo moves and making the battles more interesting. Some episodes can be a drag, some are cool. It all depends how you feel about certain allies.

Another cool thing are gifts. You can buy them computers, posters, weights… And give it to them, again raising the bond and this time also making those items a part of your home base. I loved at the end how the whole room if full of those gifts and how your allies play with those, programming video games and such. I ended up loving my crew and having max bond level with them made the battles so much more interesting. Why? Because the game comes with few combo moves, the rest is heavily placed on your team and how you cooperate with them to stagger enemies. That is what I want to talk about next. 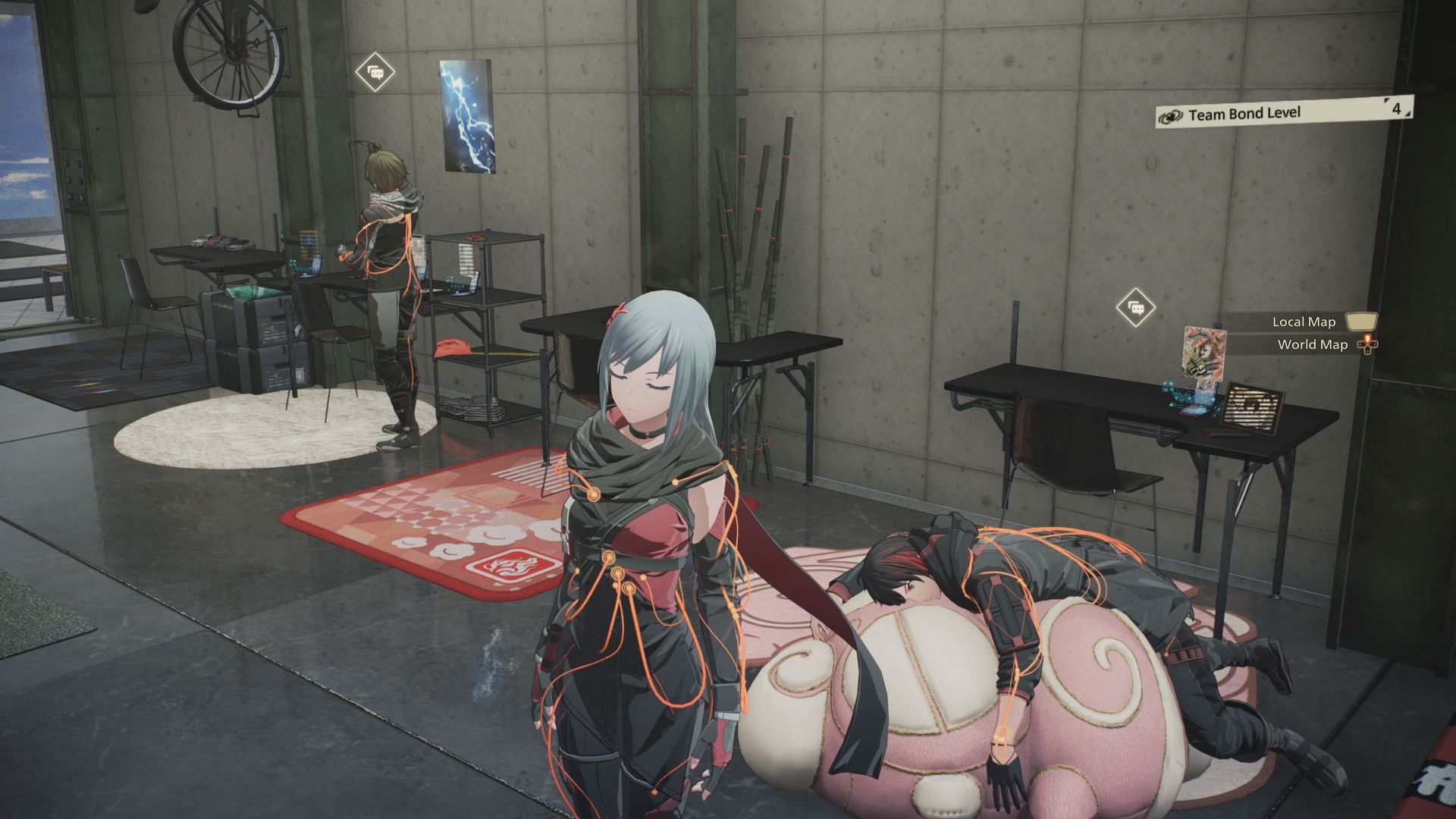 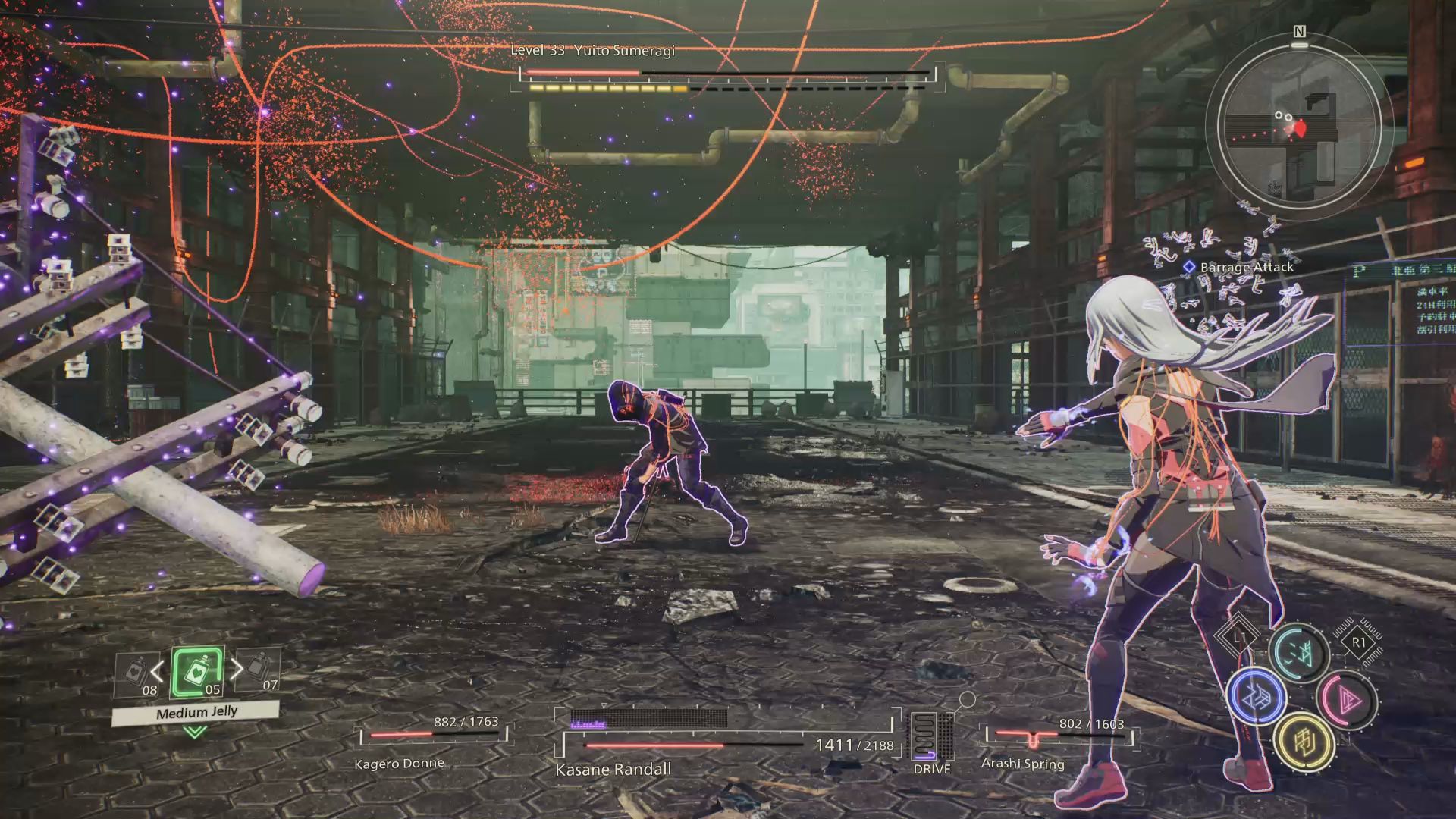 Yuito loves his Baki! Look at him go! Well, some other occassions will place him agains you, so prepare to balance between the two. Cool thing - if you use your special object psychokineses agains Yuito, expect him to do the same, resulting with special battle QTE events.

I though I’m going to get bored with battles. That never happened. The game lacks when it comes to enemy variety, but it’s strong when it comes to just being fun. I loved the battles, boss fights, regular ones… It’s just juicy! When you run around, avoid what comes in your way and take that car from the ground, then shove it in enemy’s face... That is just something else. I think I just love psychokinesis.

The ways you can stagger an enemy are also great, you need to follow the same pattern, but you can get there by using different strategies/combo moves. For example, there are enemies that are fast and you can’t hit them. You need to borrow power from Arashi to slow down the time and then you can deal with it. You also have lightning, fire, invisibility… You name it! When you combine all that and 8 combo special moves, few regular combos plus jump (also, double jump!), you will end up being satisfied. It’s fun and it’s not easy, few button mash tries and you are dead (at least on Normal difficulty).

There is also a special Brain Crush moves that are short kill animations when you stagger an enemy (love them!) and Brain Field specials that act like a god-mode where you deal massive damage, but you can also die if you don’t turn it off before the timer runs out.

And lastly, interaction with objects on the field is neat, you can also use “special” objects that requires certain button input to use them properly. For example, you can use the spikes and pound them into enemy a few times. There are also busses you can drive and eradicate everything in your way…

Overall, great job, I loved the battles. Locations on the other hand, not so much. 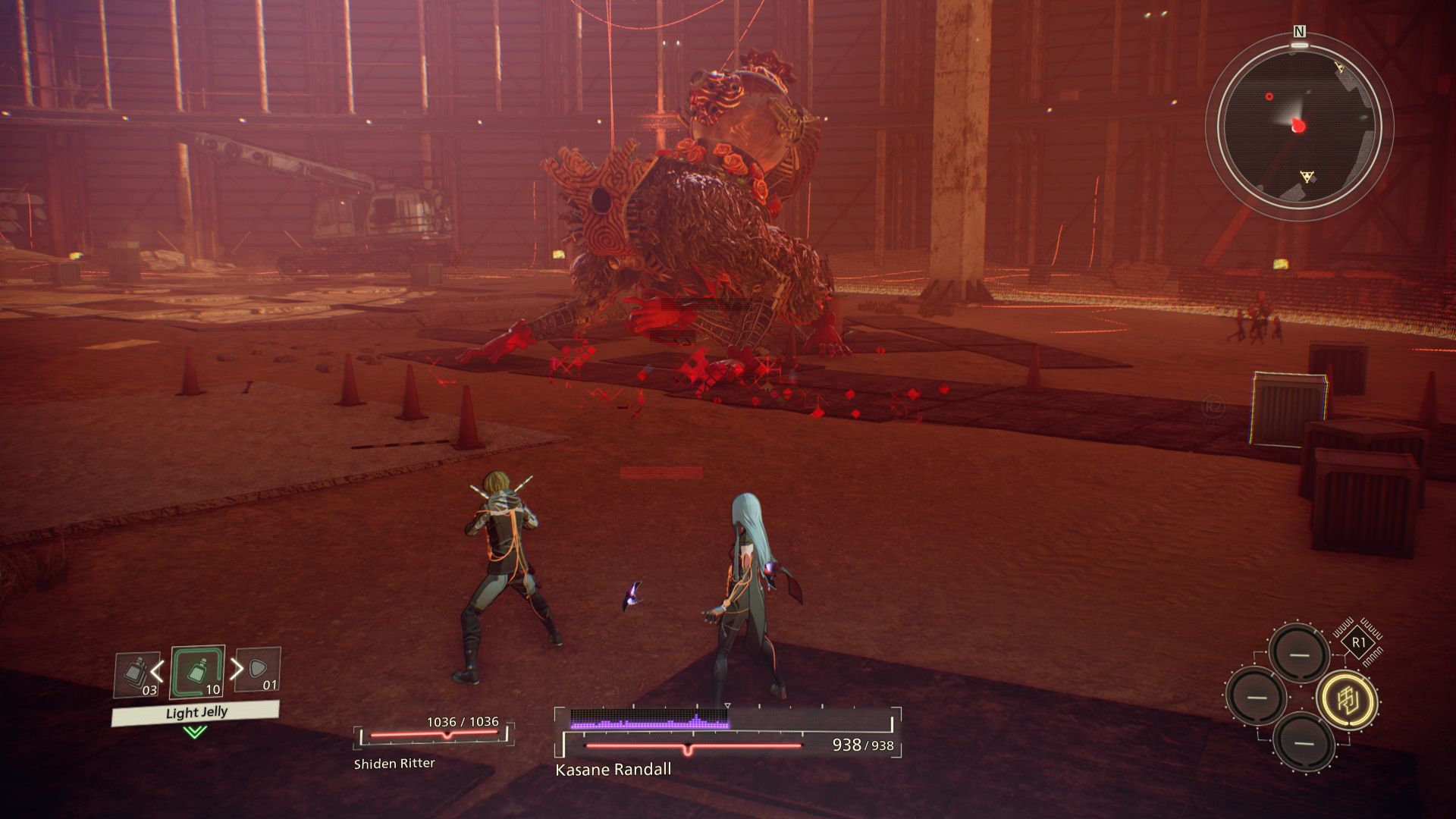 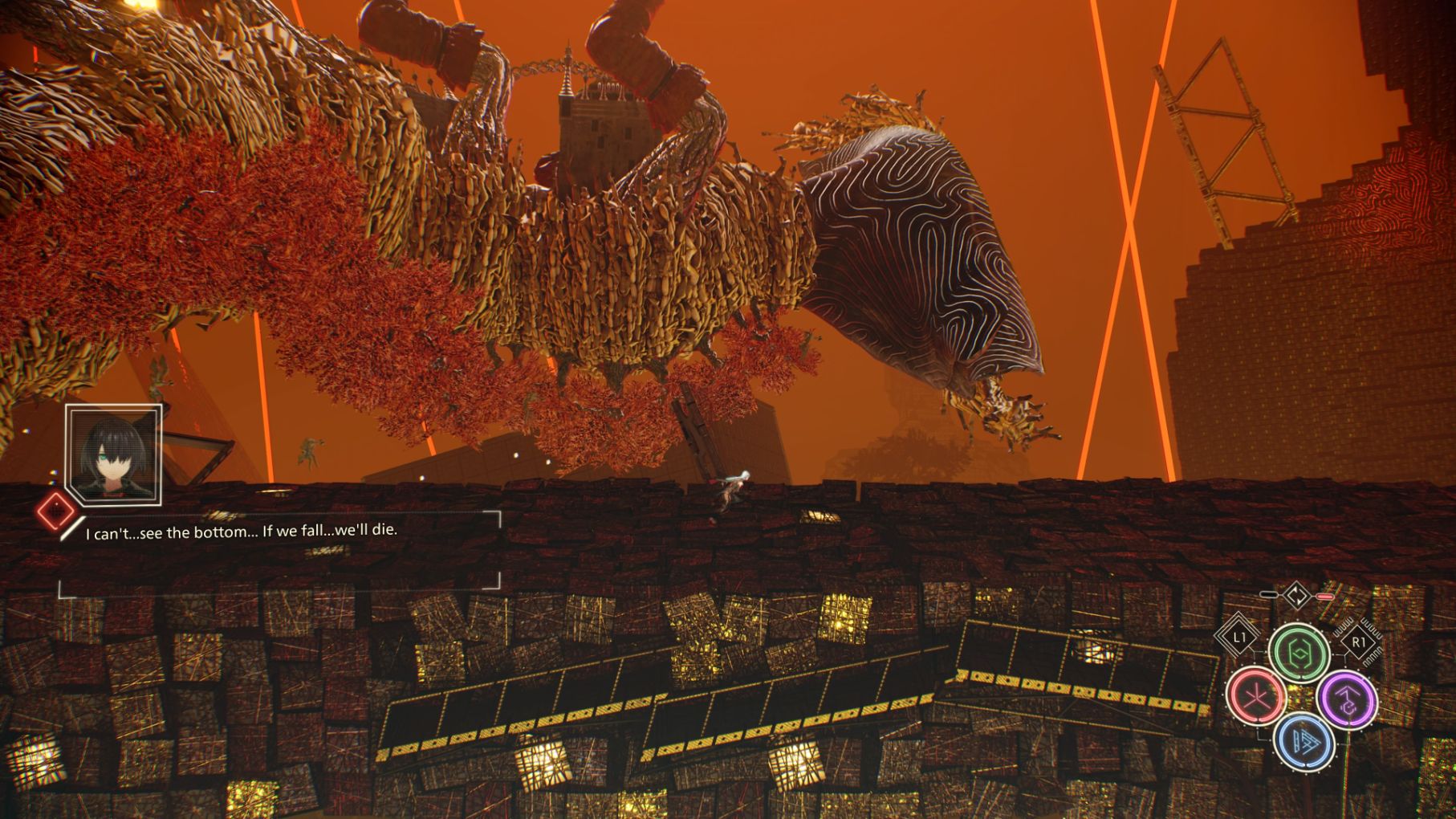 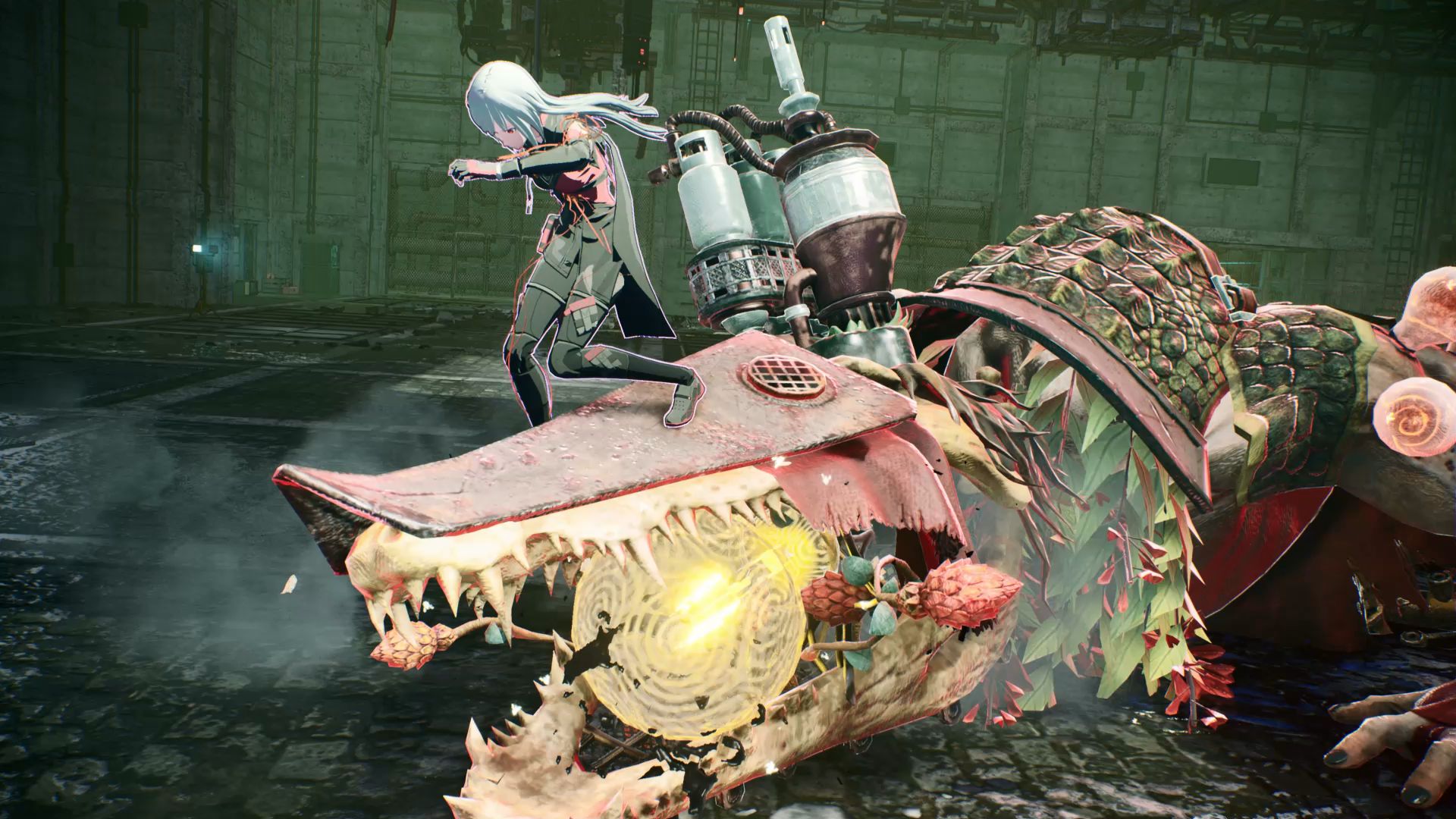 There is just so much that could be done better. Not that this was bad, but when you look at the environment and compare with beautiful character and enemy design, you just want more. Brain Crush scenes (finished moves - last picture) are awesome, Brain Field (the colorful termo picture) can be cool, the side scrolling part of the game was so cool as well... And the ass-like boss fights, noice! This game had so much potential to use these special powers when it comes to puzzles, but left us cold.

The weakest link. The turn of point. The… Yeah, you get it. I dislike locations and their design in this game. They are so uninspiring and simple, linear. Linearity is not bad, but when you place few common item drops, weak exploration and just a lot of rubbish on your way, you kind of get resentful about it. The biggest problem is that you revisit many locations. You end up going through the same boring sections, killing same but powered up enemies. Who wants that? Yeah, battles are fun, but when you look at the same destroyed environments, you end up disappointed.

Now, you can combine that with fetch side quests. Those are not bad, but don’t make any sense whatsoever. Rewards are common and you can get that in Shop by exchanging materials. The only sense of doing them is for trophies. They don’t expand the story, they don’t even come up with their own story, it’s basically kill these 3 enemies using certain move, report, take the useless reward and goodbye. Since I loved the fight, I ended up doing them, but I wouldn’t recommend them at all. Simple RPG system. Baki heads? Yes please. Unlock double jump, just don't expect the jumping to be perfect - I dunno why, but when you barely jump above some platform, you will never be up. Maybe some polishing to be done.

Also, the game lacks proper RPG elements. When it comes to weapons, yes, you can get more powerful versions, and the only difference is… Color! Screw that. I expected cool designed sets and such, but in the end all we got are few outfit variations (I guess the most will be in online stores), some attachments as Baki heads and Baki figurines (Baki’s are cool weird mascots in the game, Yuito loves them!) and etc.

Most of the resources comes from killing enemies, those that are rare comes mostly when you execute special kill sequences to finish them. The rest are environmental items used to exchange in the Shop, but you can always also just use money to buy for that you don’t have materials. Either way, simple and I’m a bit sad it’s not deeper and more complex.

Leveling will of course raise your stats, give you some BP, which are used to unlock different skills and powers that can be used in battles. I advise double jump, I love it. I also love how you can move while in the air if you unlock corresponding skill, plus combo your way using attacks + psychokinesis. Don’t expect much, but for a game designed like this, it was just enough. Maybe the second run can be a bit boring as you already know everything, but first 30 hours were fun for me. I want more locations and scenes like these! Loved the style, love the graphics in some scenes.

If only they made better, more complex and unique locations and filled them with some hidden stuff, good, strong quests and stronger side content. If that is in, we would be talking about really magnificent game.

If only we got more variations of enemies, if only we don’t have to backtrack so much. That would raise the grade. When it comes to music, I liked some tracks, some I found mediocre. They wanted that Persona-like feel when you end up in your home base and I noticed that. Some tracks are really cool, but overall I can’t remember much from the soundtrack.

Scarlet Nexus is a good game, dragged down by mentioned flaws, but at the same time fun enough to offer you a decent experience when it comes to action RPG’s. Both dubs are great, characters fit well, but lack deeper personality. Overall, I would recommend the game if you like the genre, otherwise I would suggest trying it somewhere or just wait for a discount. Until next time (I really do hope there will be a next one, and that it will fix all the flows).

Oh wait! Big plus to developers, 0 bugs, 0 crash, heptic usage, fast loading times... They did almost perfect job with polishing up this game - something I rarely see nowadays. Guys, don't stop now, new game can be better and we can maybe call it a masterpiece.

"Sweet anima action RPG with some issues when it comes to environment design, enemy variety and side content. Otherwise, a decent game for genre lovers."