"Experience your Star Wars love in the form of leaders in adventure: Prince of Persia, Tomb Raider, Uncharted, Castlevania and Dark Souls. That's one good gang bang if you ask me!" 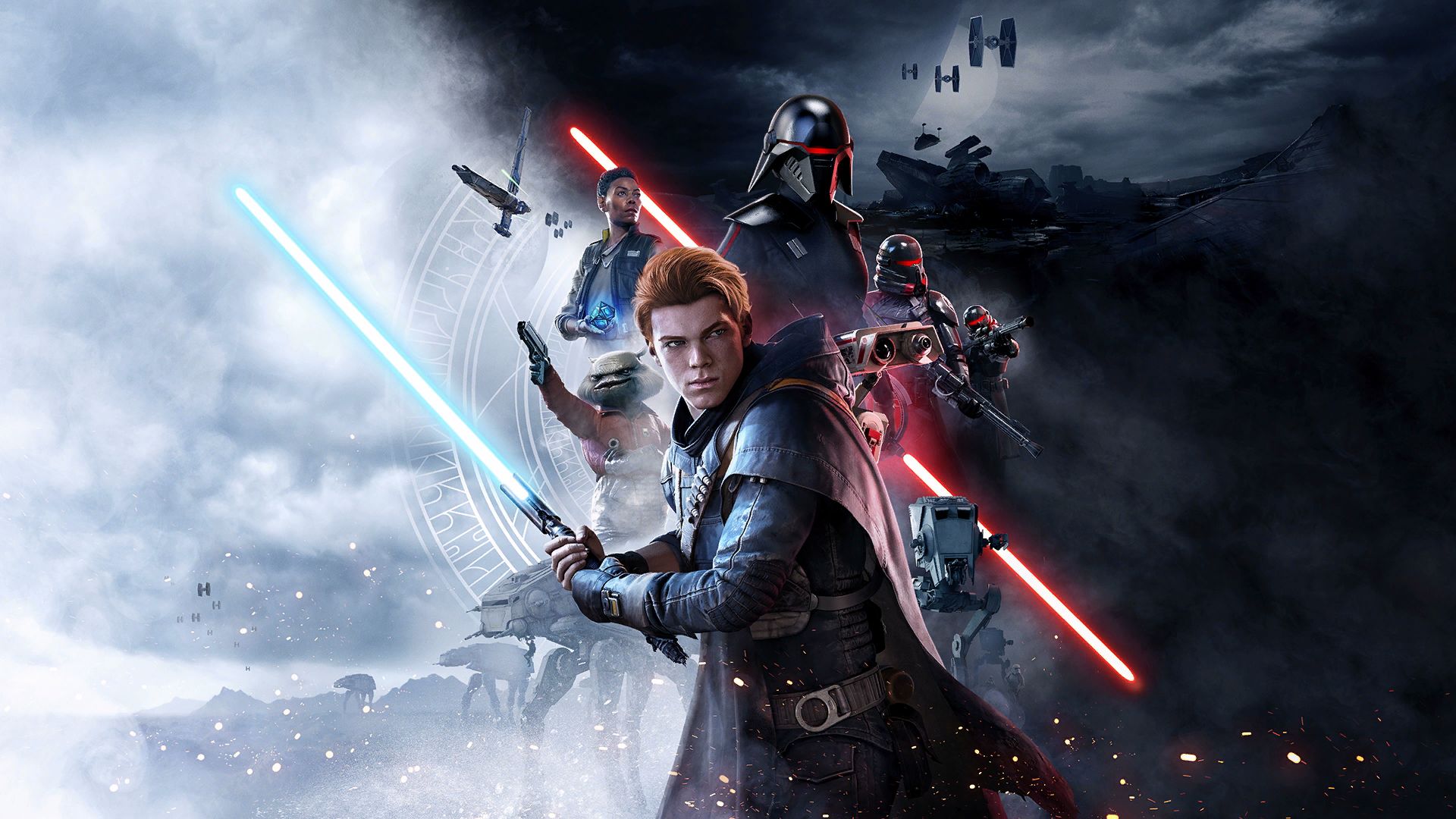 It's quite popular these days to copy the best of the best and release that combining different universes into equation. I don’t mind much, but that for me means lower grade because it seriously lacks originality.

That is exactly how the latest Star Wars entry happened. Respawn Entertainment has made Titanfalls, Apex Legends and now Star Wars Jedi: Fallen Order. They did a fine job, even though the game offers nothing new and fresh.

What is this game? Hint: One that has double jump! 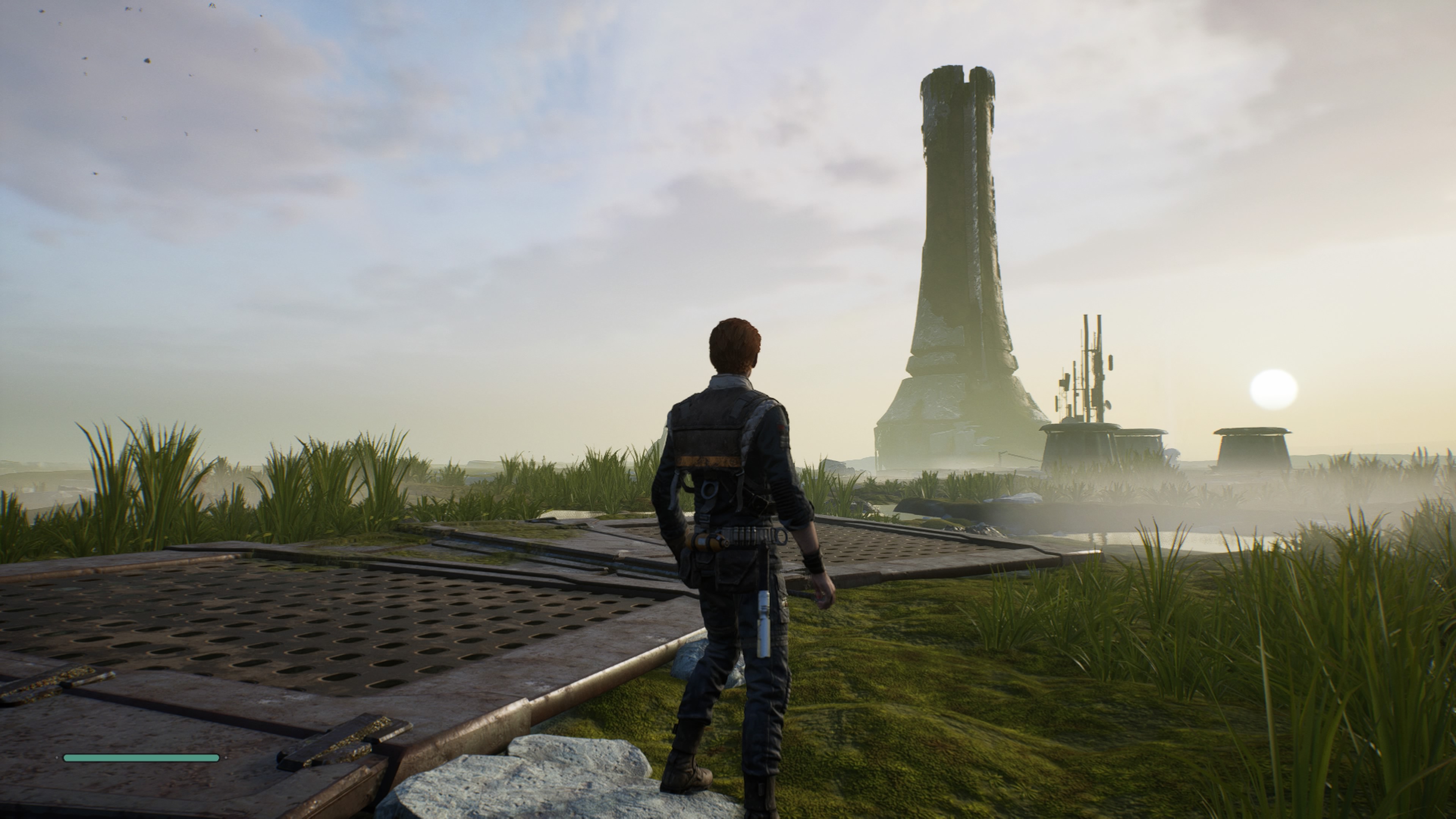 And so it begins. Cal will start his journey on Bogano. Beware of the giant frogs.

We have a single player game, a combination of Uncharted, Prince of Persia and Tomb Raider, maps and a progress curve like in Castlevania and the battles play out like in Dark Souls. All what I consider the best in its own league. That fact will for sure bring players to buy and praise this title, but at the same time, for me it’s hard to love EA after all these failed years behind them. Now, all that is combined with Star Wars universe, lightsabres and space vibe and it all fits so well. 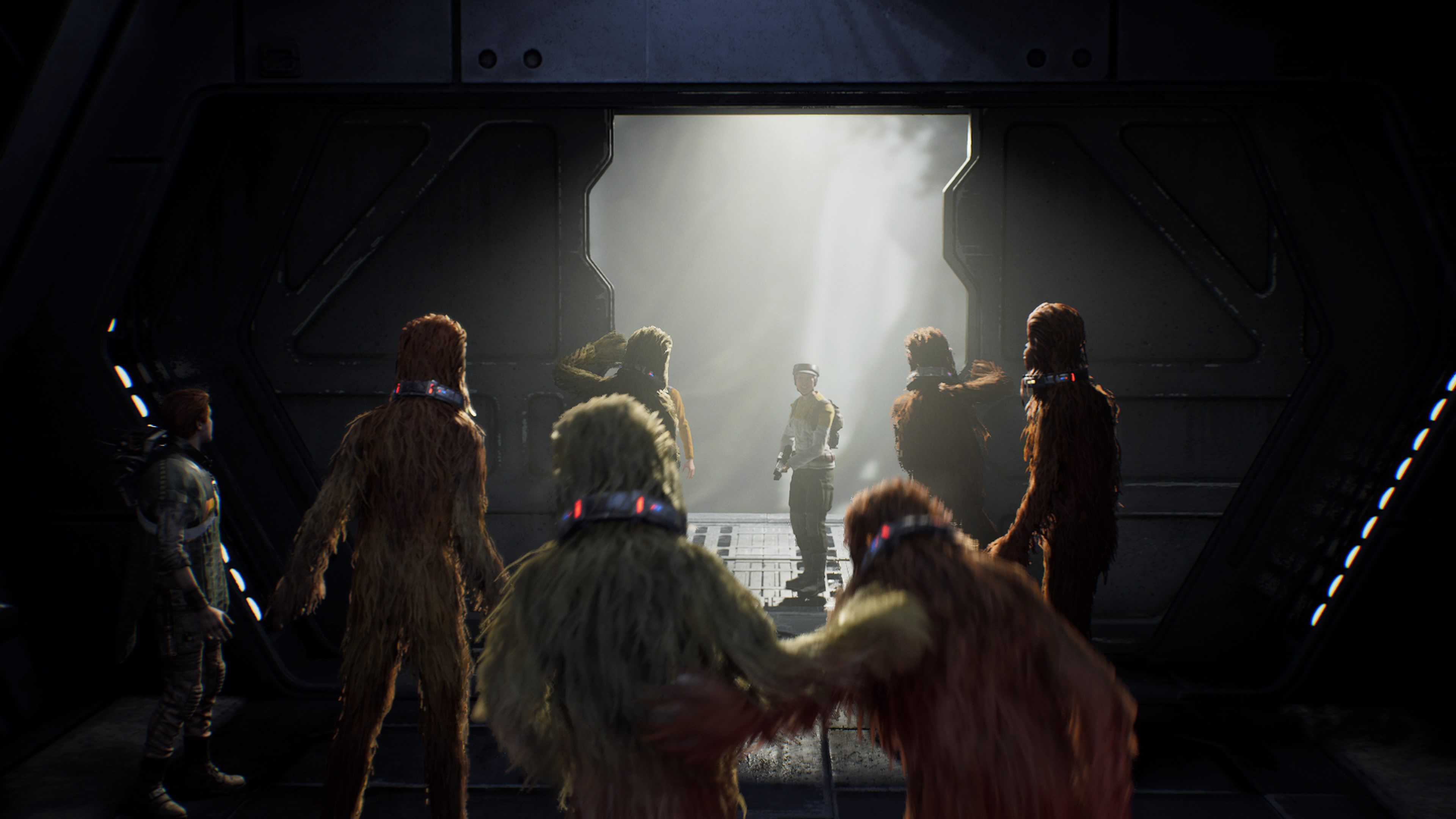 This is a story about Jedi Cal, embodied by actor Cameron Monaghan (Shameless, Gotham), who is trying to find his way to survive the Empire. The Empire trained their goons and yes, they will want to kill you and eradicate every Jedi on the planet. Of course, on your way through different ones, you will meet new allies and become friend with them. The former Jedi Knight Cere will become your new mentor.

I found the story to be pretty average; the protagonist was ok, nothing special, the story itself is kind of generic Star Wars, nothing we haven’t already seen. The sound effects are fine, also there's nothing that stands out and nothing to praise, just maybe those lightsabre swings and basically anything with blaster – that is top notch! Imagine watching a movie in this universe; blasters and sabres are my favourite Jedi parts. Overall, the sound effects are spot on when it comes to fitting those in this type of a game and universe. 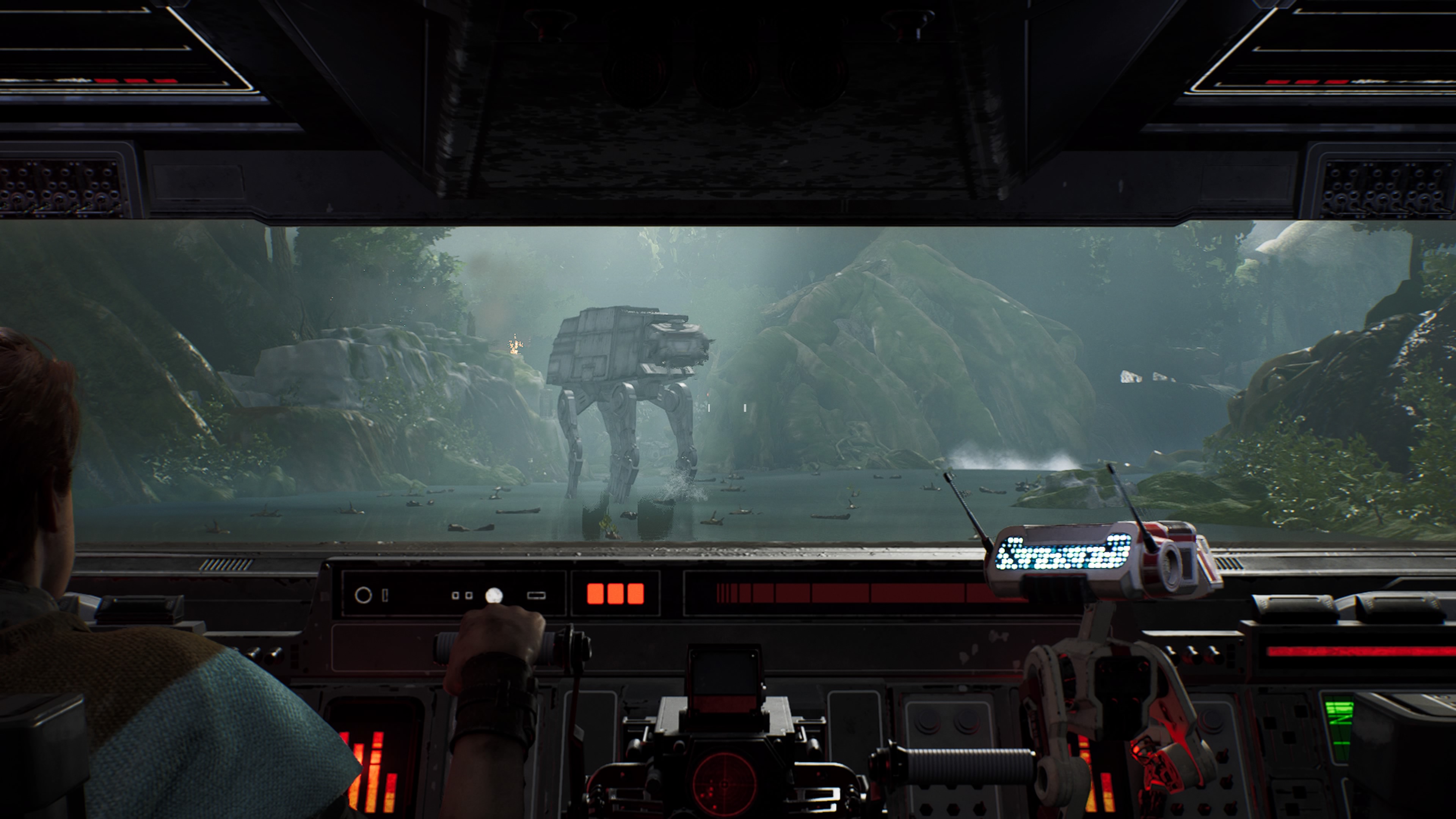 One of the best scenes and interactive sequences in the game. Period.

The world is well designed. I really like what they did in here. Every planet you visit with your ship is different and it offers new challenges. You can jump, climb, wall run, swing, hang and climb the ledges, slide…All what you did in Tomb Raider for example. It’s a combination of linear locations and it works almost flawlessly. There is no fast traveling, I sure hope some future update bring that to the table.

When it comes to graphics, it’s ok-ish, even average at some points. I like the greenery and nature-type planets, they are so much fun, they feel fresh and I always prefer nature instead of metal (metal only when it comes to music!). Some are breath-taking, especially the snow planet (I just love the snow in games). It will push you towards exploration and when you start screenshotting – you know you are hooked. 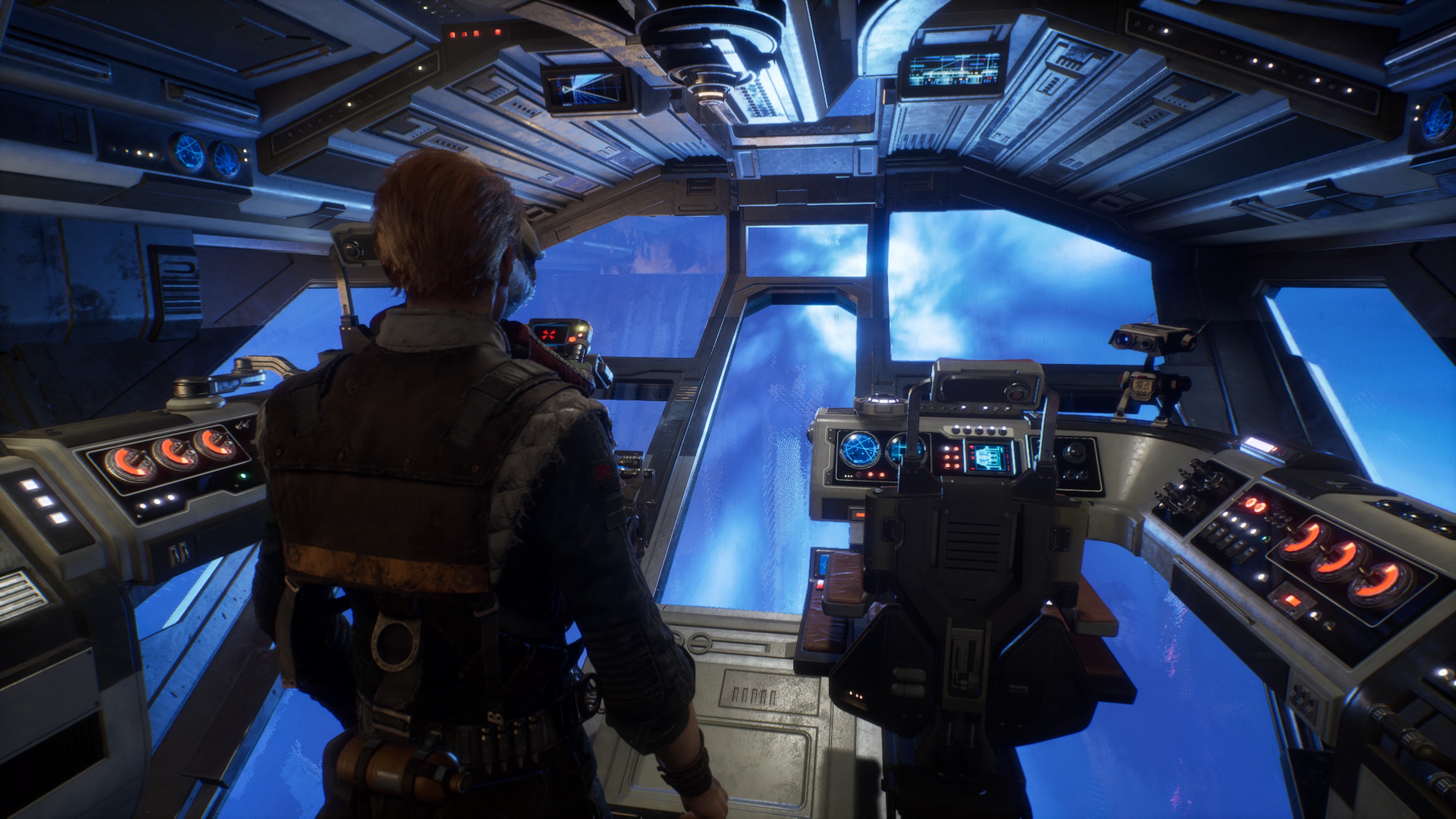 Mantis is your ship. Although this screenshot did not turned out to be special, taking of with Mantis is awesome.

During your visits (and there will be revisits), you will reach certain areas and solve puzzles, kill enemies and bosses. That will lead to new skills, will require some backtracking (game has no fast travel) and open new missions on different planets. It never felt boring or redundant when it comes to revisiting. Maybe only when going back to your ship.
The checkpoints are basically bonfires called meditate points which are used to master skills, rest and save your progress (which happens entirely automatically, so make sure not to get stuck hehe). 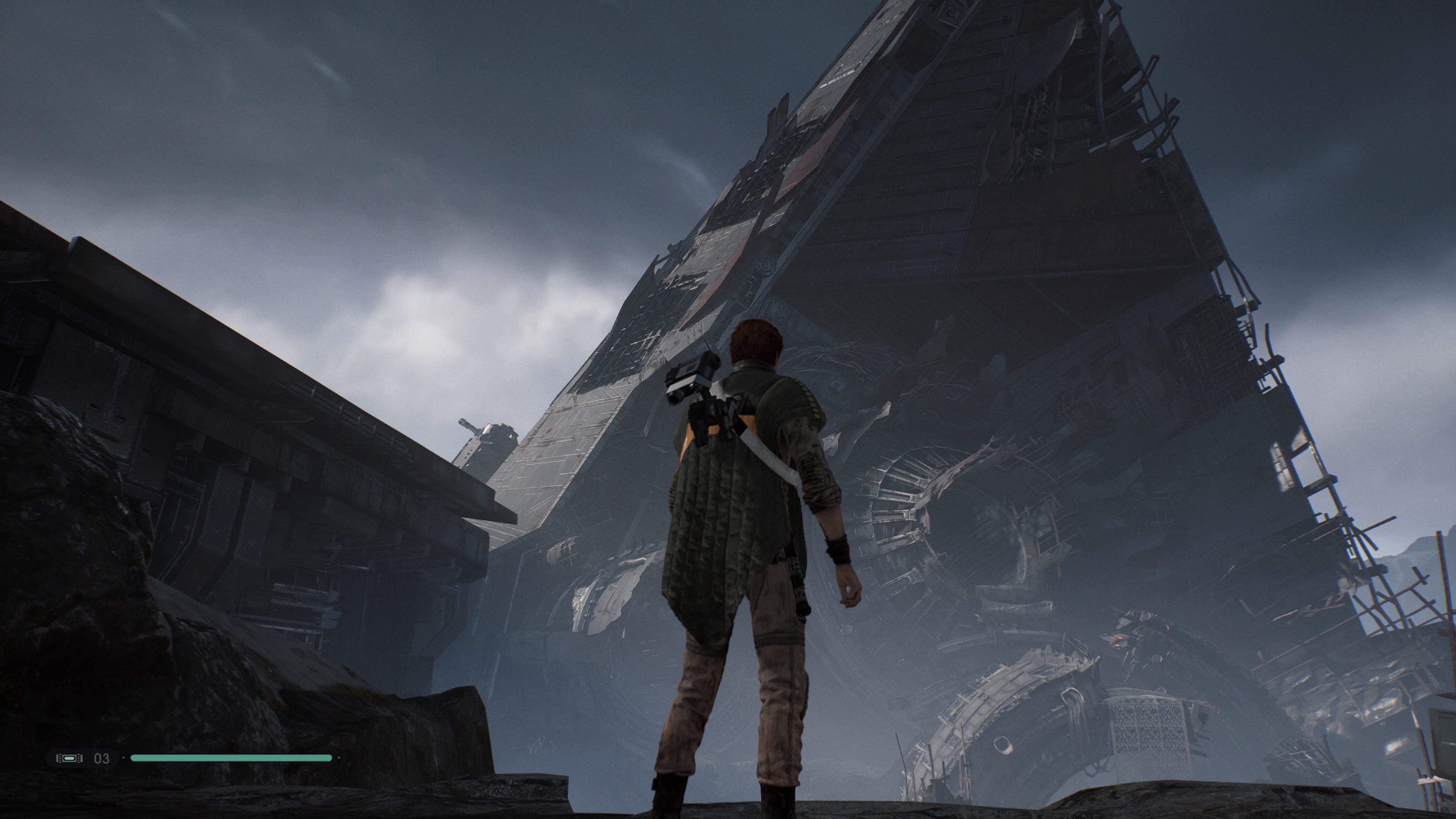 Scenery is stunning from time to time. Of course, I love the snow planet.

At this point, I feel the game needs more time for polishing. Jumping is ok, but clunky. Climbing up the ledges can be a pain if you don’t point the left stick forward all the time. Camera can also be a pain when you are navigating through narrow paths and avoiding enemies when they form around you.

The biggest problem is that the game has serious crashes, I was lucky to get one. During the first scene in the train, my console crashed. I had to reboot, repair my drives and try again. The second time the same thing happened. I had to start with a new save from the beginning, pausing the game in the middle of the scene to avoid overheating my PS4 PRO. Disaster.

Many planets have collectibles you cannot even get. Bugs will block you and laugh at you. Luckily, there is a workaround for all of them. But the biggest one is when you visit certain planet and jump where you are not supposed to; having no double jump can autosave and kill your game. You can get stuck and you must start from the start of the game. Yep, EA ladies and gentlemen.

How good is my lightsabre? 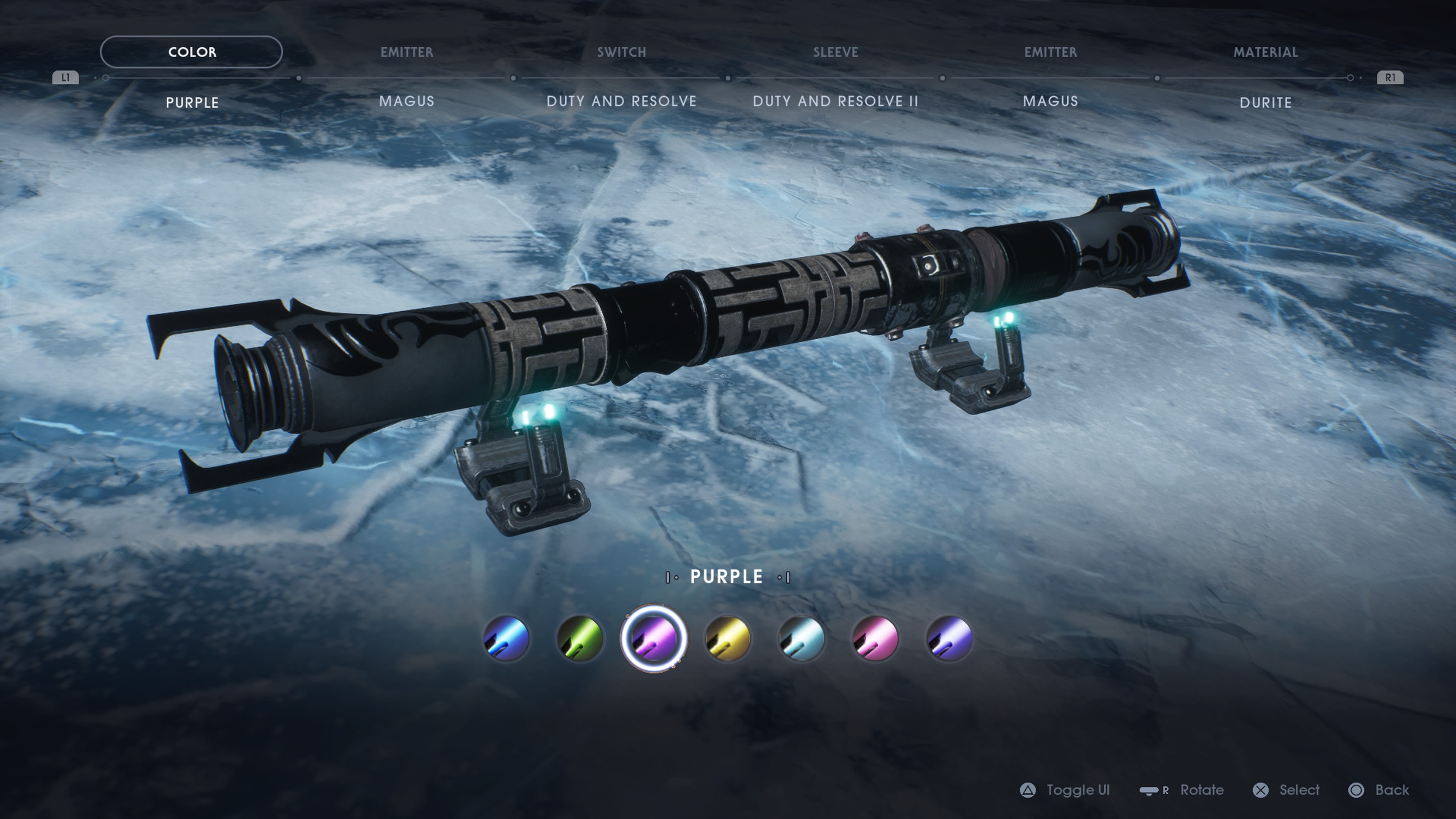 I'm simply dissapointed how simple the customization of lightsabre is. Bad Respawn.

If you ask me what my favourite part of the game is, it would be…Exploration and platforming, alongside with fighting. Fighting is fun, but very basic. They copied Souls type games and made the fighting basic.

When you aim and lock on an enemy, you can circle around, dodge, block and attack. The level of satisfaction when you do hit with the lightsabre is pure happiness. Love the sound, love the effects, love the kill animations. Although when you reach the end you will be fed up with these mechanics, as they don’t develop as much.

You will learn new skills, some are cool, some are worthless. Slowing down enemies was the best thing. Slow them, slice them apart. You can pull them, push them, combine your force to do the best combinations. Deflecting blaster bullets is cool.

I don’t like the customization of your lightsabre – there's nothing you can do to upgrade it, just modify its colours and parts. Later you get double sabre and dual wield skills, but that is it. I heard many positive comments about the game and only one thing came through my head – did you guys even played KOTOR? RPG elements, being good or evil, sabre upgrades…This is just too minimalistic.

Cuastomization can be done on some other levels as well: for example, you can change appearance of Cal, your ship, BD-1. They are all simplistic, but hey, at least we got something. 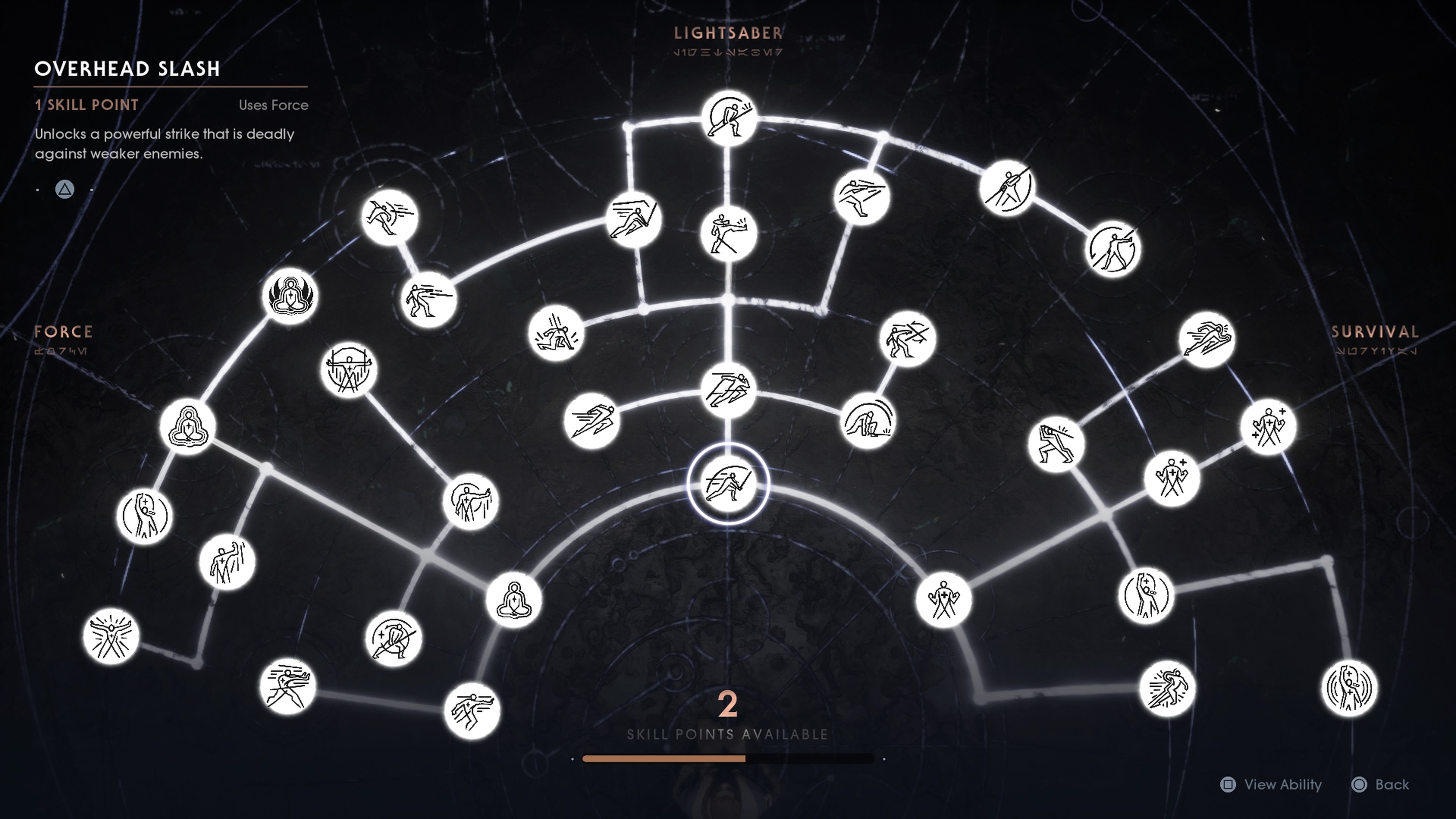 First, max HP up. Next, Force up. Next, longer slow skills.

BD-1, collect that shit from the floor

Your small companion is a droid BD-1. He scans flora and fauna, murals, enemies, maps, you name it! He acts and behaves like a robot puppy. He will come in handy in fights when he learns couple of skills to hack robotic enemies, but nothing special.

When it comes to collecting stuff, be ready for backtracking. All planets have unreachable areas that you need to revisit after getting all skills. And by that, I mean double jump and such. Double jump, you just raised this game’s grade!

All those mentioned collectibles are nothing you will need during the game progress. What is good are the health packs that raise number of healings, health and force max upgrades. These can save your ass on higher difficulties. 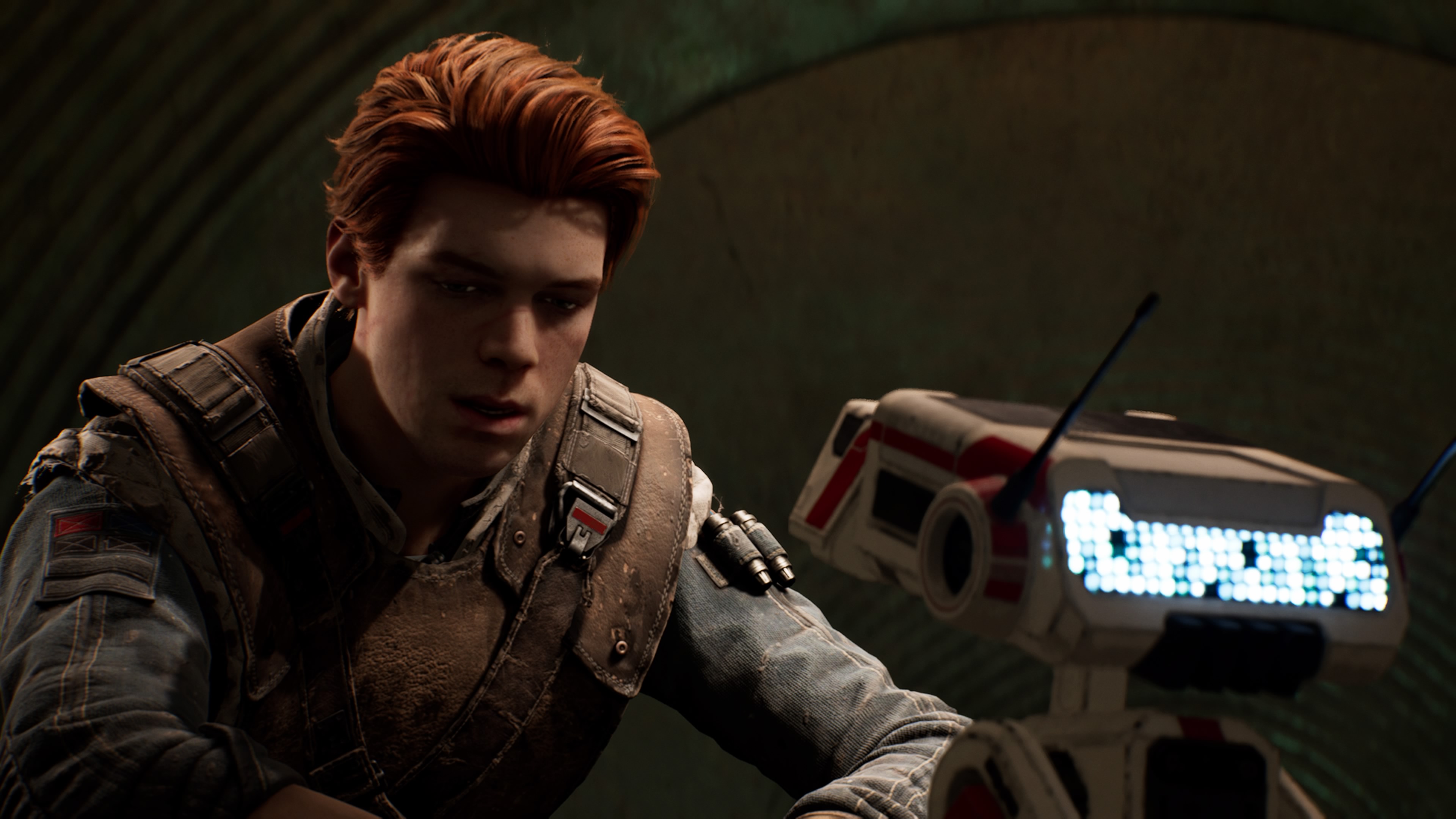 He is a monster. Every Star Wars features one. It’s a shame all the bosses are pushovers, which can be killed with the same strategy. I don’t want to spoil anything here, so make sure to experience this by yourself. The animations are cool, but boss fights are very minimalistic and pose no threat.

Play the game on at least ¾ difficulty level. Everything less is too easy. Sure, some areas will be frustrating, and glitches can cost you your life, but in general I found the game to be very easy in comparison to what I used to play.

When you die, you lose the experience from a skill level that you've collected points for. Meaning if you die you will lose whatever counts toward the next skill point. No matter how many times you die, you can find enemie or locations where you were killed/died, kick or pick up that experience and you are good to go. Lightweight penalties eh? 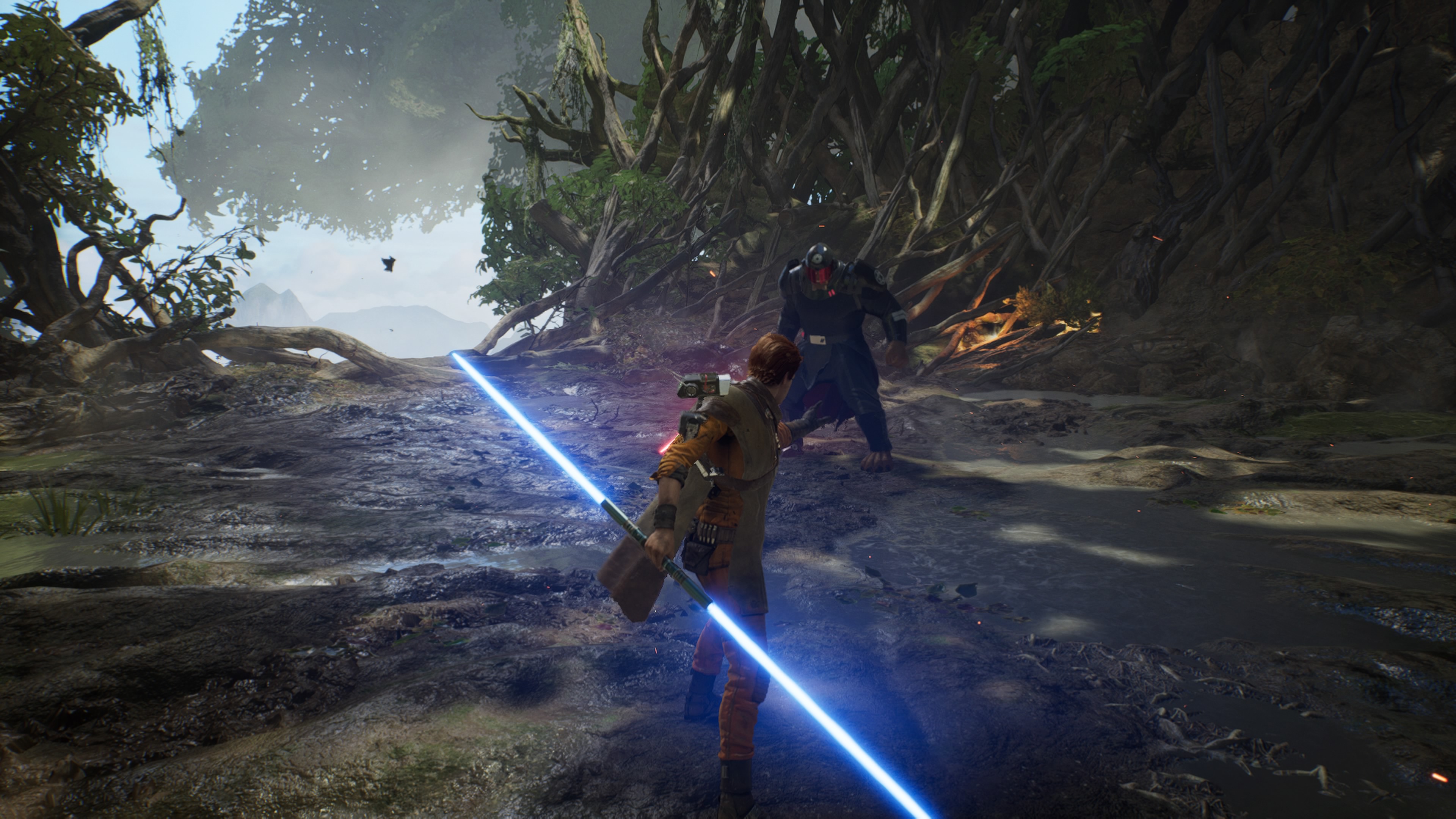 Not a big bang when it comes to boss fights. Also, not much bosses, especially after I cut their arms.

Is this Star Wars worth it?

It most certainly is. Finally, EA released a single player microtransaction-free game that is rock solid and fun to play. You can finish it under 20 hours, but it would be a shame not to explore everything that every planet has to offer. That is the best part anyway.

I must give praise to the map as well. It’s easy to navigate, it is really detailed and I wish all games have maps like this one has.

I’m mad that they let those glitches and bugs be a part of the experience. By fixing them they can be cocky and finally follow through with what they have accomplished. EA had lost its way until they figured out that single player games can be a hit. Just imagine playing as a Jedi, using the force to shovel your way and destroy everything that comes your way. Power, satisfaction, happiness. 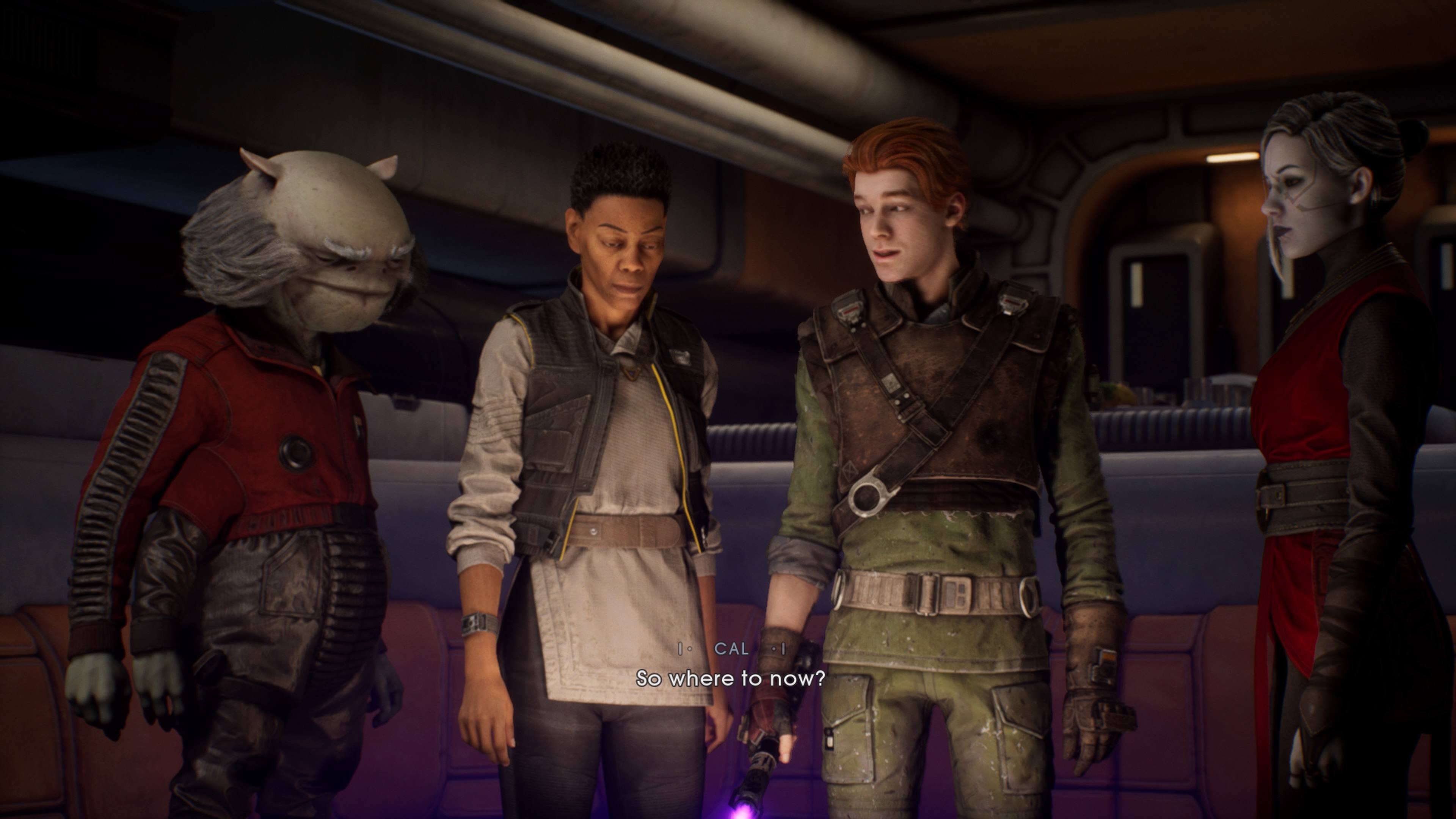 The best character is this weird woman on the right. I just didn't click with others. Where to? Back to Dark Souls.

To sum things up – Star Wars Jedi Fallen Order is a rock-solid title that offers great experience in all segments of the game. Great presentation, fun exploration and platforming, solid battle system and overall one of the best Star Wars games so far.

But that is the thing! Each game from which this one draws its inspiration is better at those stolen segments than this one. I don’t mind, I love what they did, but they played it as safe as they could. For sure I expect a sequel, and for that they need to get out of their comfort zone, innovate a bit and get more in-depth with almost everything. That will give me and the players even more pleasure.

EA, you did good. Continue with that.